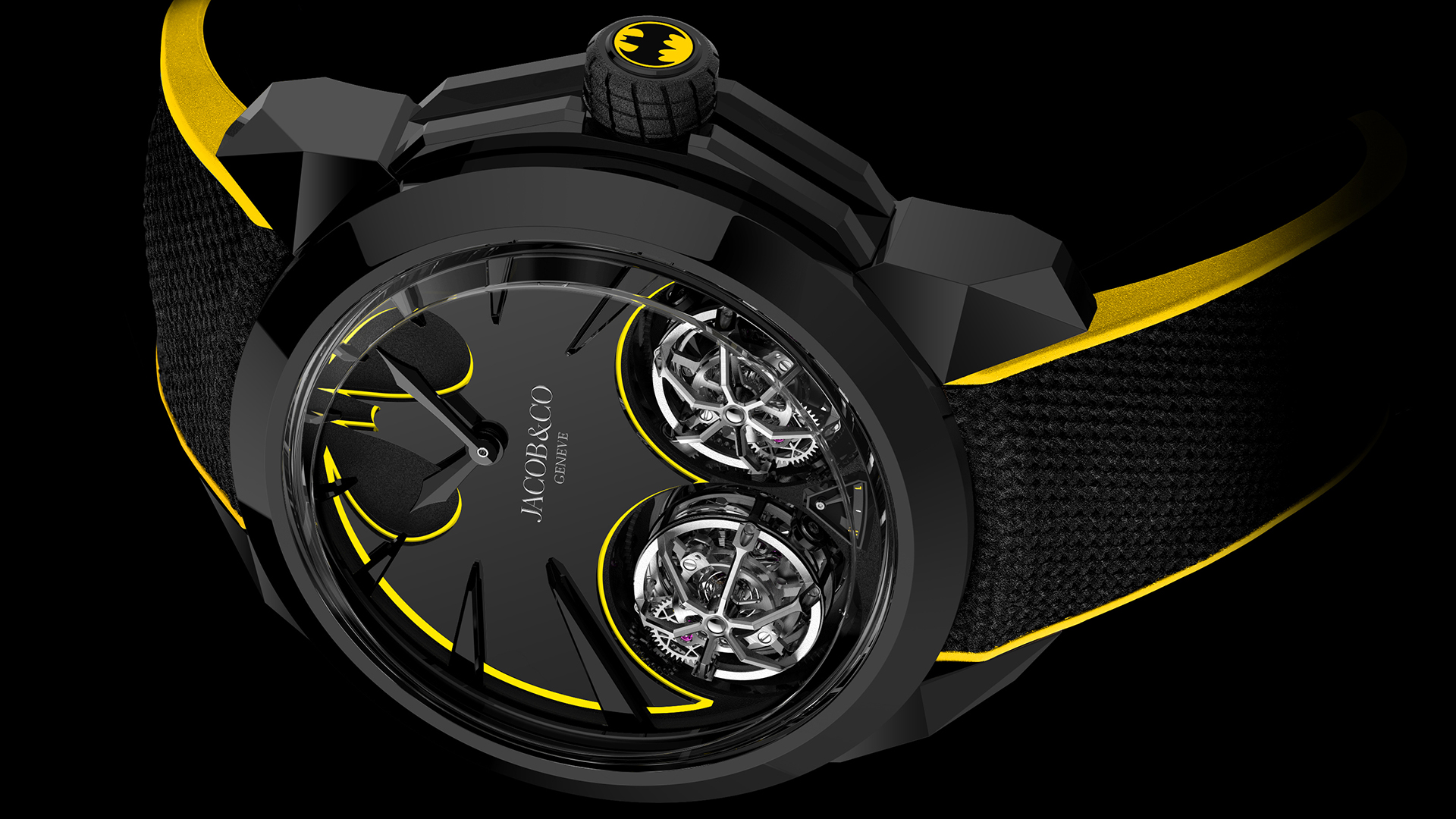 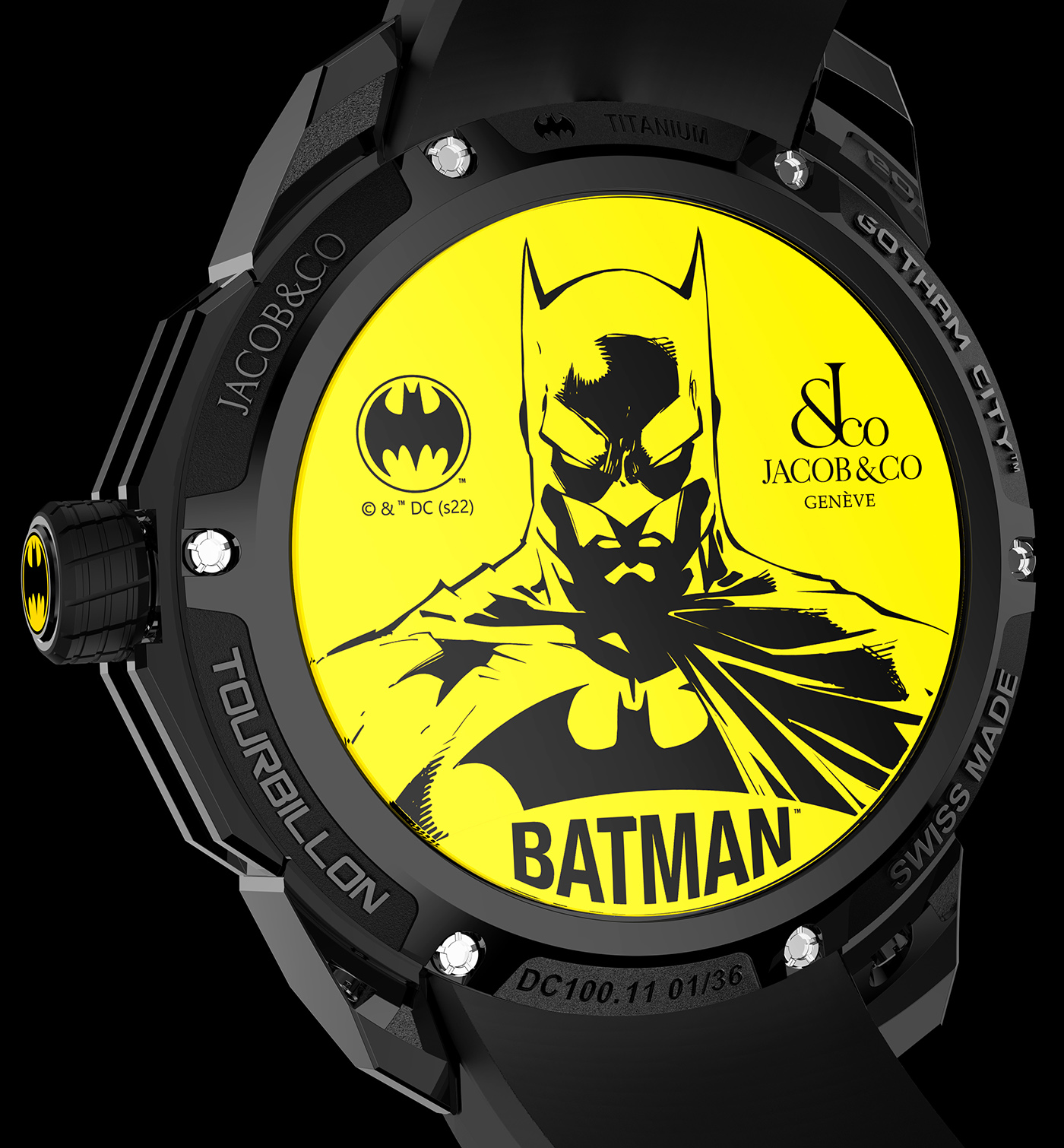 Although there is no shortage of pop culture crossovers within the modern luxury watch industry, perhaps no other character has captivated the watch landscape as much as Batman. From accessible microbrand designs to unofficial Rolex model nicknames and six-figure skeleton tourbillon models, the Caped Crusader has inspired a seemingly endless array of timepieces and paraphernalia over the years. Jacob & Co. is the latest brand to dive into the world of Batman with its latest releases, announced as part of a new multi-year partnership with franchise owner Warner Bros. Consumer Products, and its take on a Batman-inspired timepiece may be the wildest and most luxurious to date. Available in two divergent but complementary styles, the limited edition Jacob & Co. Gotham City is a no-holds-barred, spectacle-driven design that aims to capture the comic-book panache of Batman and his famous gadgets. 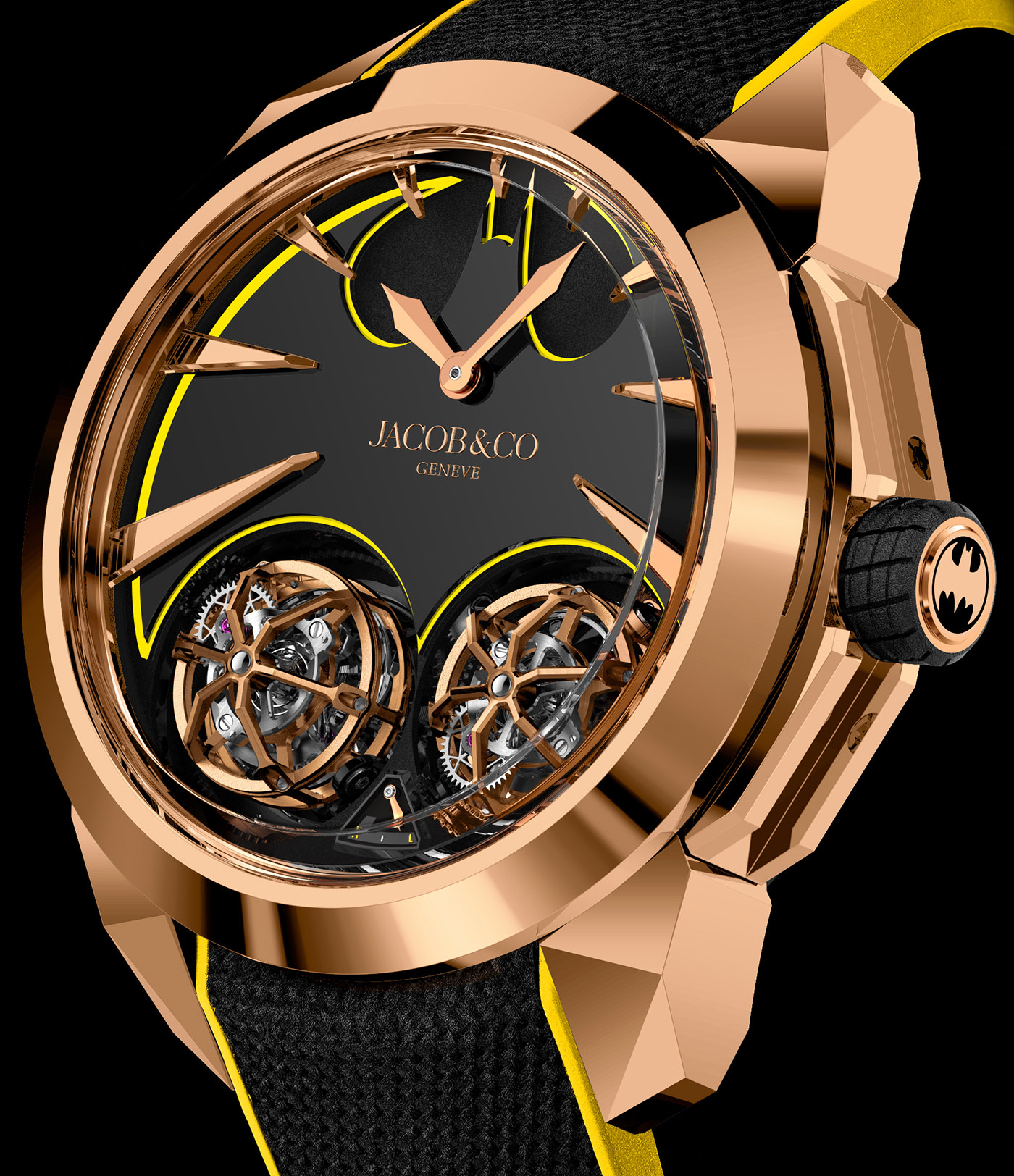 With a 45.5mm case diameter and an imposing 17.2mm overall thickness, the Jacob & Co. Gotham City should cut an aggressive and muscular figure on the wrist. Available in either Batman-appropriate black DLC titanium or a more luxurious 18K rose gold, the overall case form is beefy and sharply angular, with broad, multi-faceted lugs flanked by elongated skeleton crown guards and a wide, steeply sloping smooth bezel. Both variants use a rubberized black crown for improved grip, topped with Batman’s signature emblem. Jacob & Co. rates both versions of the Gotham City for a disappointing 30 meters of water resistance, but takes two markedly different approaches to caseback designs. For the DLC titanium model, Jacob & Co. fits the watch with a solid caseback featuring a printed sketch of Batman himself, along with signatures for both Jacob & Co. and Batman publisher DC Comics. In keeping with the brighter, more ornate presentation of the rose gold variant, the brand fits this model with a sapphire display caseback to showcase the in-house movement within. 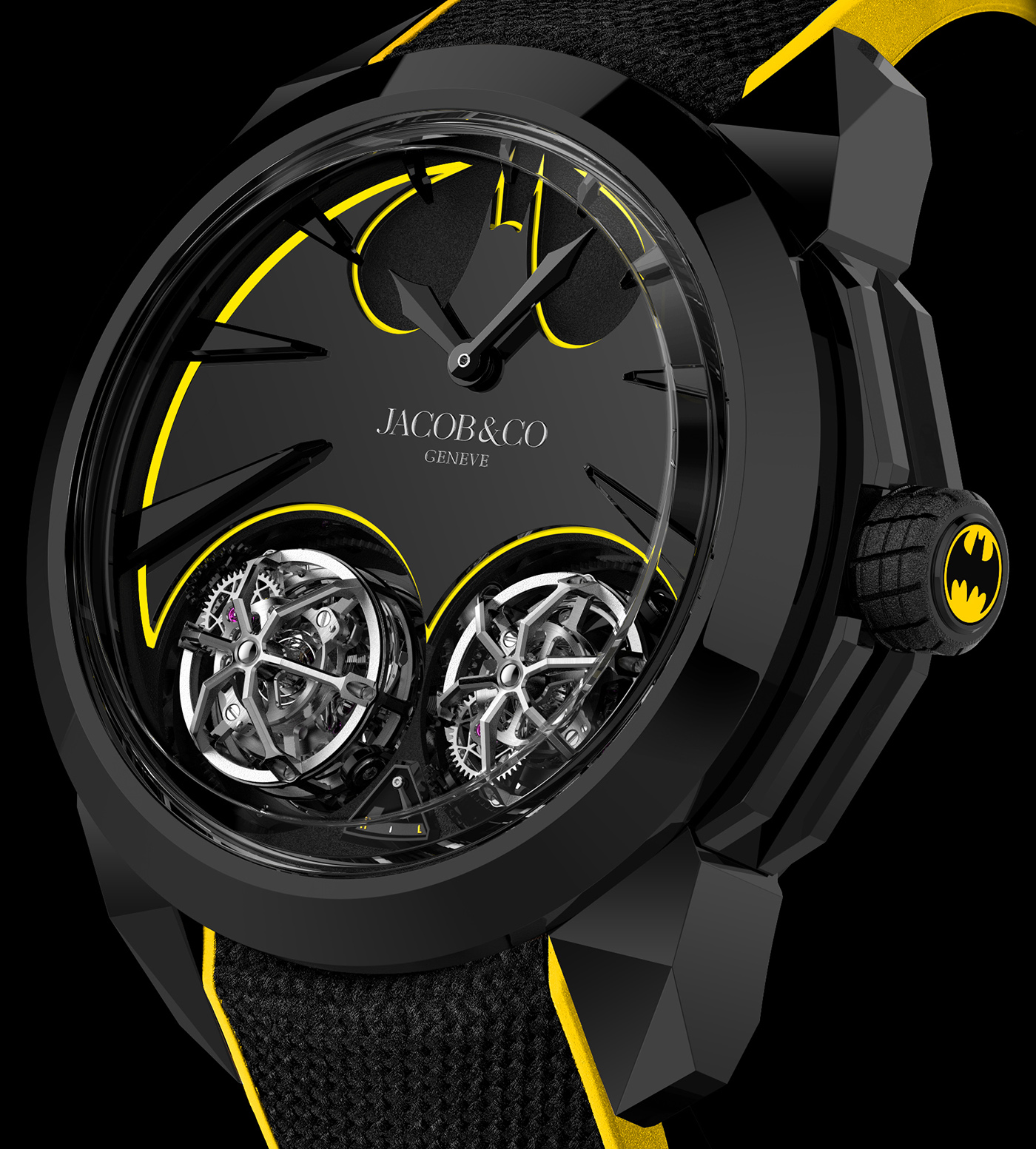 Jacob & Co. takes a graphic, partially skeletonized approach to the dial of the Gotham City. The majority of the real estate beneath the crystal is taken up by a polished, hand-beveled rendition of the Bat-Symbol in pure onyx. This sharp, exaggerated form is outlined with a lower layer in bold yellow synthetic Neoralithe, which is imbued with Super-LumiNova and should make for a dramatic display in low light. The Gotham City’s actual timekeeping functions are relegated to well above the dial’s center line, with a set of small case-matching faceted tapering hands coupled to wildly stylized applied wedge indices. Jacob & Co. also nestles a subdued power reserve indicator at 6 o’clock, with a minimalist fuel gauge-style layout and a sloping polished black frame that allows this element to fade into the visual backdrop of the dial. Naturally, however, the real centerpiece of this dial is the twin sequential flying tourbillon assembly at 5 o’clock and 7 o’clock. The bold, domed skeleton cages are rendered in sandblasted titanium or rose gold depending on the case finish, and feature a sharp, claw-like motif meant to evoke Batman’s signature grapnel gun. These spherical tourbillon cages use Jacob & Co.’s three-axis escapement design, with an outer ring that rotates once every 24 seconds, a middle ring with a 48-second rotation, and an innermost axis with a slower 180-second rotation period. While this sounds impressively complex on paper, these tourbillons may prove divisive in practice among enthusiasts. Like some previous Jacob & Co. multi-axis tourbillon designs, these elements use an abrupt, jumping motion without the smooth sweep of many comparable escapement designs. 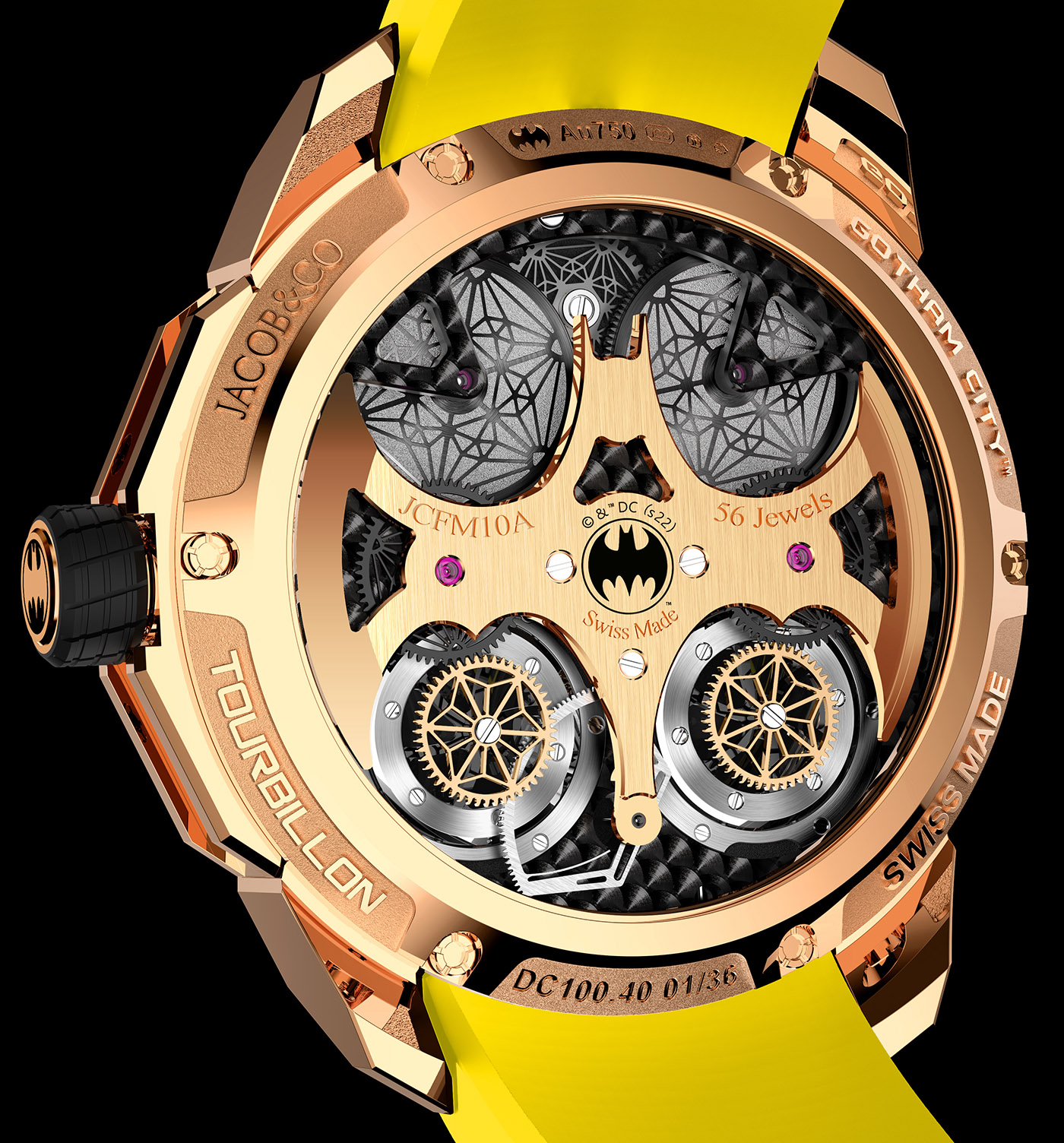 Jacob & Co. powers the Gotham City with its in-house JCFM10 handwound dual sequential flying tourbillon movement. The JCFM10’s finishing is intricate and heavily stylized, with bridges and plates in fully perlage-finished black chromium flanked by a central skeleton bridge in brushed and polished rose gold styled to resemble the Bat-Symbol. Additional elements from the mainspring barrel covers to the bases of the tourbillon cages use an ornate, geometric “Dark Deco” architectural motif that evokes the dramatic buildings of Batman’s home city in images. In terms of performance, the JCFM10’s twin mainspring barrels allow the watch to maintain a respectable 48-hour power reserve at a 21,600 bph beat rate despite its notoriously torque-hungry tourbillons. Jacob & Co. fits both variants of the Gotham City with a rugged black cordura-effect rubber strap, with vibrant yellow lining that harkens back to Batman’s enduring color scheme in images.

While there is a broad selection of Batman-themed luxury timepieces for the modern enthusiast to choose from, the spectacular movement design and fearlessly aggressive styling of the limited edition Jacob & Co. Gotham City makes this one of the most audacious and stylish models ever inspired by the Dark Knight. Only 36 examples of the black DLC titanium Jacob & Co. Gotham City will be made, along with an additional 36 rose gold models for a total production run of 72 watches. The Jacob & Co. Gotham City is available now through authorized dealers. MSRPs for the black DLC titanium and 18K rose gold variants stand at $220,000 and $240,000 respectively, as of press time. For more details, please visit the brand’s website.