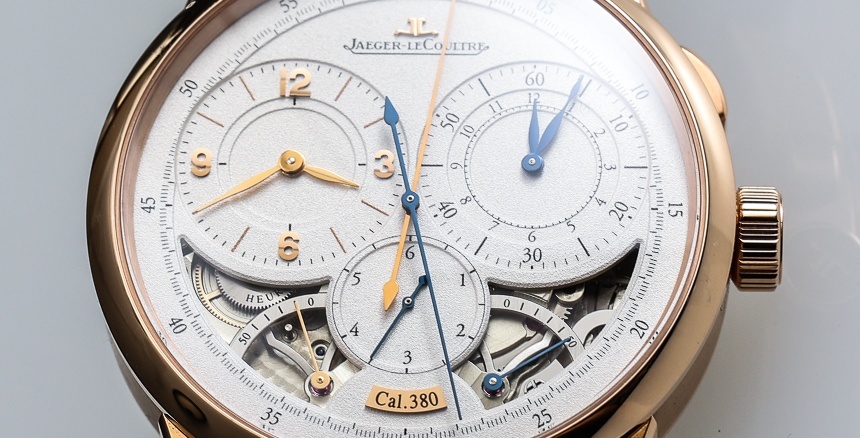 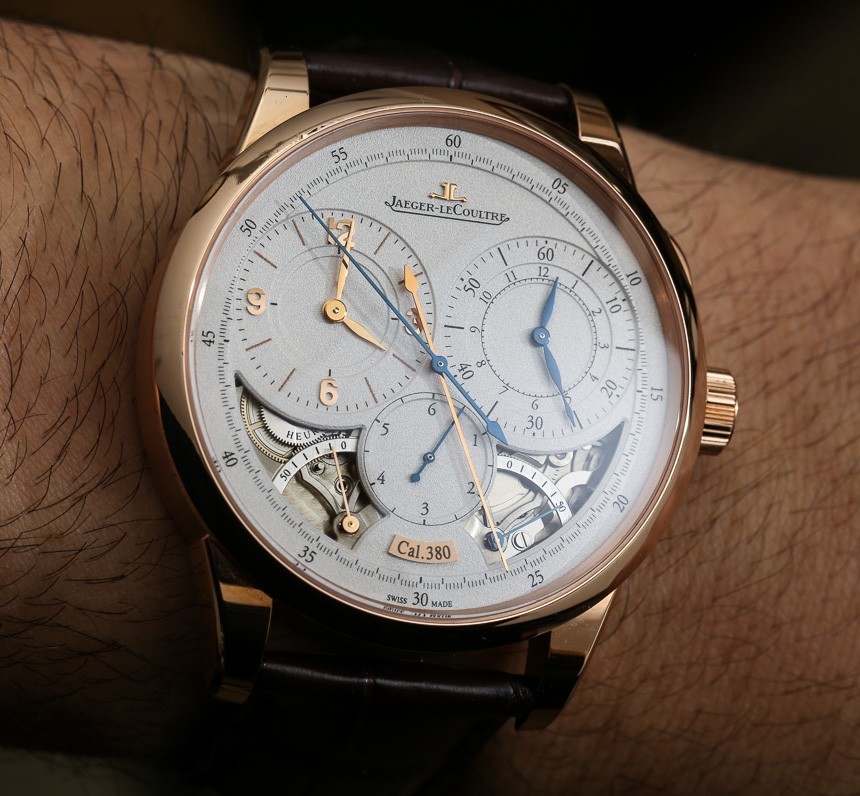 The Jaeger-LeCoultre Duomètre à Chronographe is a real watch lover’s watch. A lot of people can appreciate its impressive design that mixes technical appeal and classic looks, but when it comes down to it, this watch was built by serious watch lovers for serious watch lovers.  You get a lot of that in the watch industry, which is a testament to the passion that fuels this business. It is timepieces like the Jaeger-LeCoultre Duomètre à Chronographe (chronograph) that help explain why a few years ago Jaeger-LeCoultre’s marketing slogan was “are you ready for a real watch.”

The Jaeger-LeCoultre Duomètre à Chronographe ref. 6012521 is part of a later collection of Duometre watches which contain a particular breed of in-house made movements from Jaeger-LeCoultre. So before talking about this specific model, it is important to discuss the collection overall. Visually speaking, what makes the Duometre movements unique is two things. First, the movements have bridges produced from German Silver. Most watch movements are in plated brass, but German Silver does not need to be specially processed after being machined. 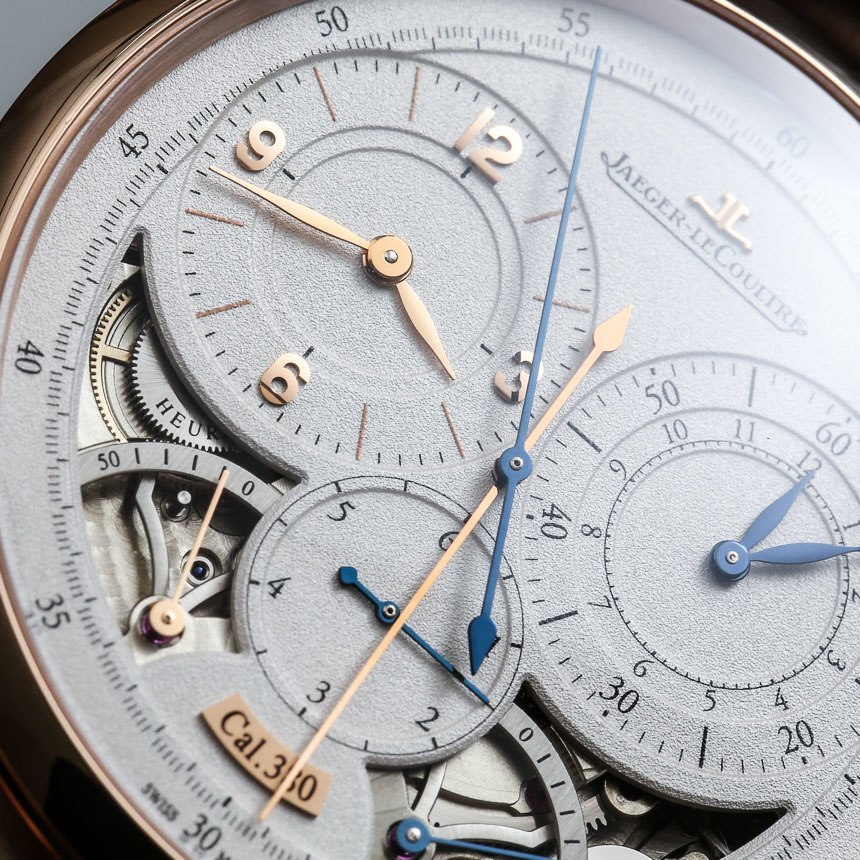 German Silver actually doesn’t contain any silver and has the tendency to patina over time, as it develops a slightly golden hue. Those familiar with watches of this design and breed will surely recognize that the German watchmaker A. Lange & Sohne (Richemont Group cousin to Jaeger-LeCoultre) also makes use of primarily German Silver for their movement plates and bridges. The material helps give the movement in the Duometre watches an even more distinct look.

Another important element of the Duometre watch family of movements is what Jaeger-LeCoultre calls the “Dual-Wing” concept. This is an interesting idea that separates the power going to the complications of the watch from the power that goes to indicating the time. Thus, there is a mainspring barrel that directly feeds to the time telling part of the movement, and another that powers the chronograph complication. 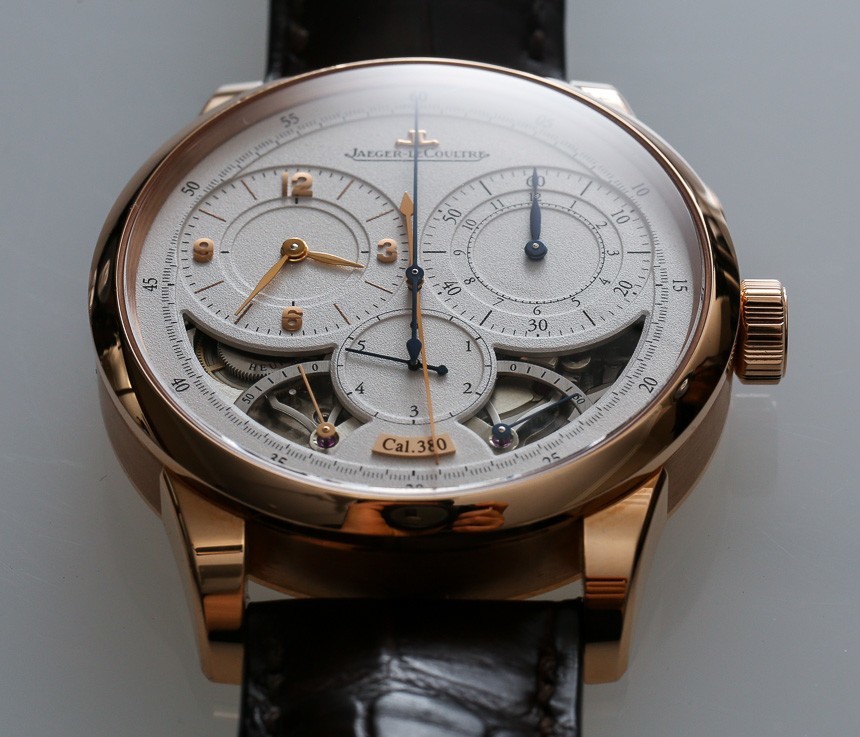 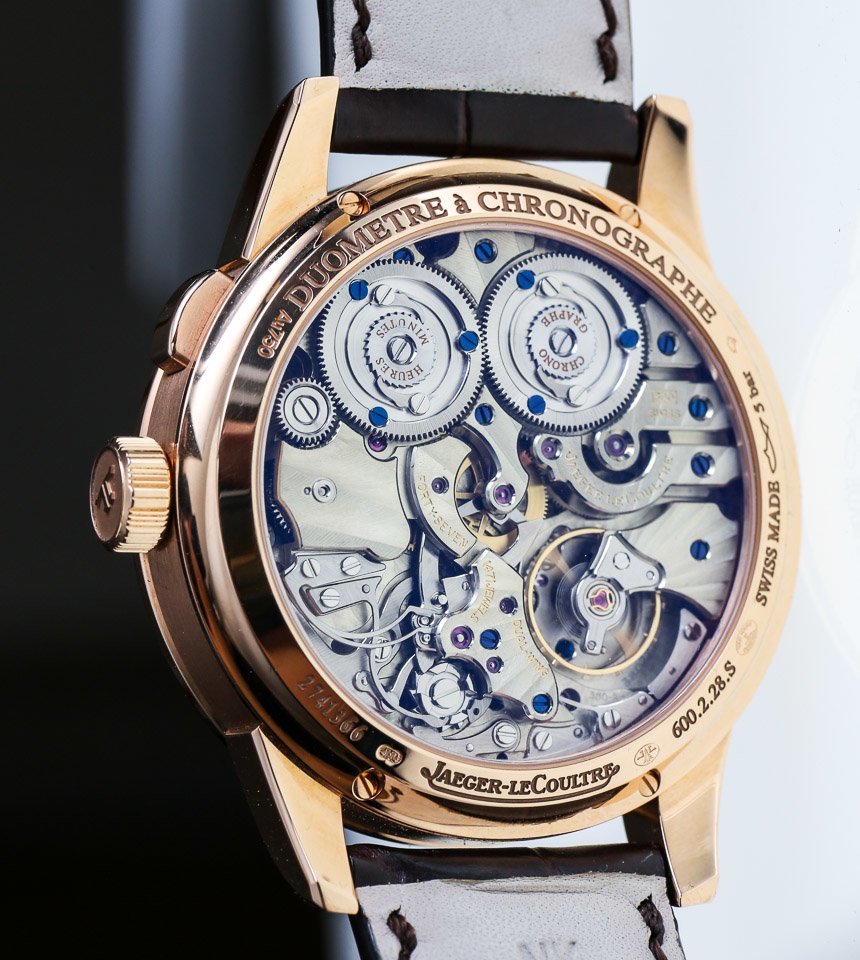 Why separate the sources of power? It isn’t really to increase power reserve (the movement has 50 hours of power reserve) but rather to increase accuracy. In most chronograph watches when the chronograph operates it has a tendency to change the amplitude and thus torque because it draws power. Some chronograph watches get around this by having the chronograph “always run” by simply disconnected from the operating hands until a clutch is activated. In the Jaeger-LeCoultre Duomètre à Chronographe, Jaeger-LeCoultre applies their Dual-Wing concept to simply separate the two as a means of improving accuracy over time.

How much more accurate the watch might be is difficult to define, and frankly, I am not even sure how one would measure that. Since mechanical watches are no longer strictly necessary for accuracy, the watch industry is more interesting in a successful execution of the concept rather than its “real world” implications. I believe that, knowing the brand, the Jaeger-LeCoultre Duomètre à Chronographe is probably more accurate over time with and without the chronograph running as compared to similar watches – albeit if only marginally. 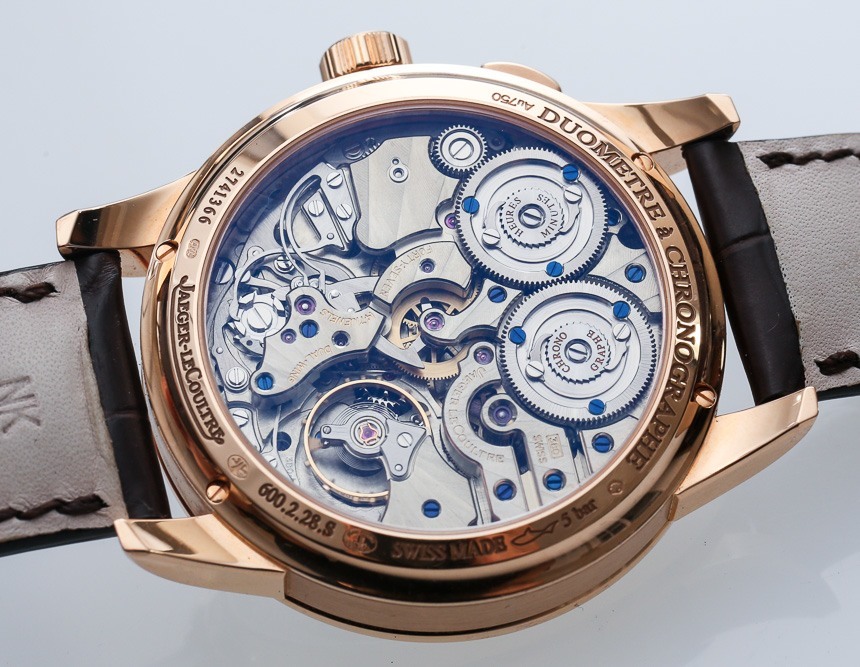 This particular version of the Duometre has two skeletonized “wing” sections on the dial with a view to the movement, which also happens to be where the dial power reserve indicators are. As you surely guessed, the power reserve indicators are for each of the two mainspring barrels. While not all versions of the Duometre collection have partially skeletonized dials, I happen to prefer it because when you invest in a watch such as this, you aren’t doing it strictly for aesthetics, you are doing it because you genuinely love what Jaeger-LeCoultre is doing technically.

The dial layout is attractive and more or less symmetrical with different colored hands for the time and chronograph indication. I typically don’t like watches that feature two larger subdials on the face, but the Duometre collection is among the few noteworthy exceptions to that rule. While the dial is conservative, Jaeger-LeCoultre makes use of excellent materials and finishing for a highly refined and legible look. It really has a wonderful mixture of class and horological taste. 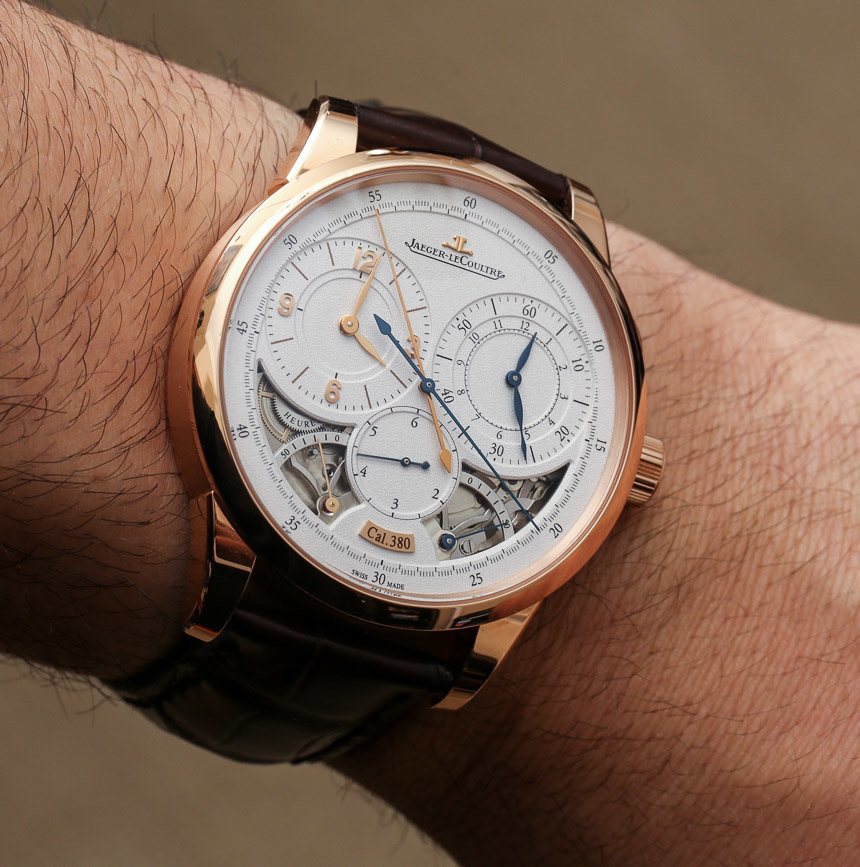 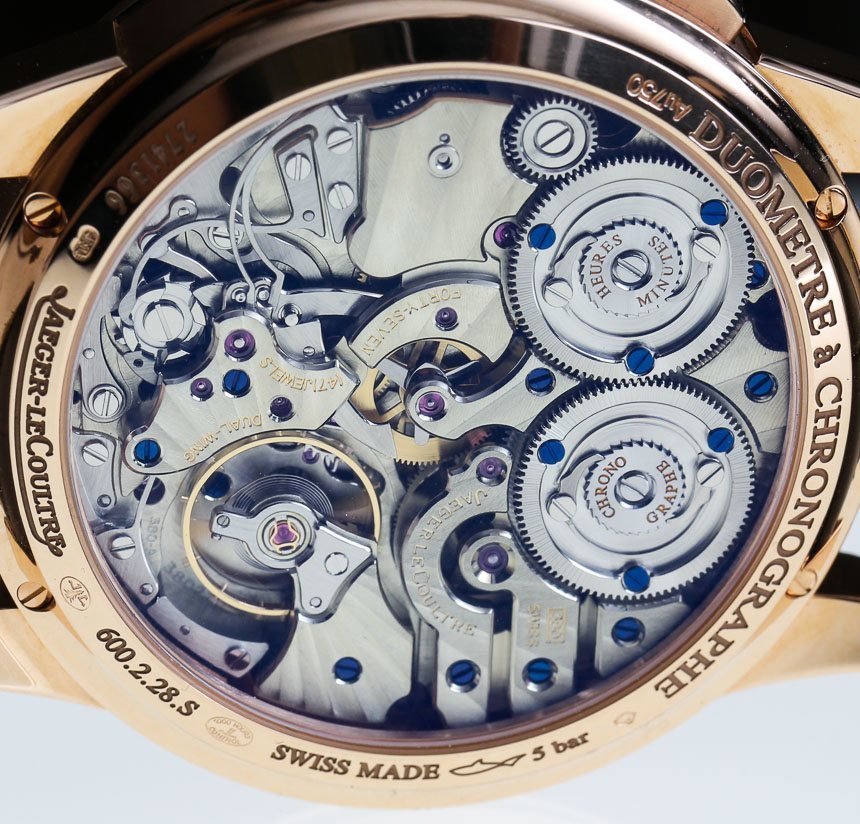 A highly distinctive visual element on the dial is the dual central seconds hands. The gold one is the running seconds for the time, while the blue one is the chronograph seconds hand. It is very rare to have watch dials with each of these in the central hand location. The right subdial on the dial is used to measure the chronograph minutes as well as hours. Given the size of this dial, it is very easy to read each of the hands. Above 6 o’clock on the main dial is a foudroyante hand. This hand rapidly spins around its dial once each second making six very quick stops. It is there to measure the time within one sixth of a second, but when it comes down to it “flying” foudroyante hands are just darn cool to watch operating. 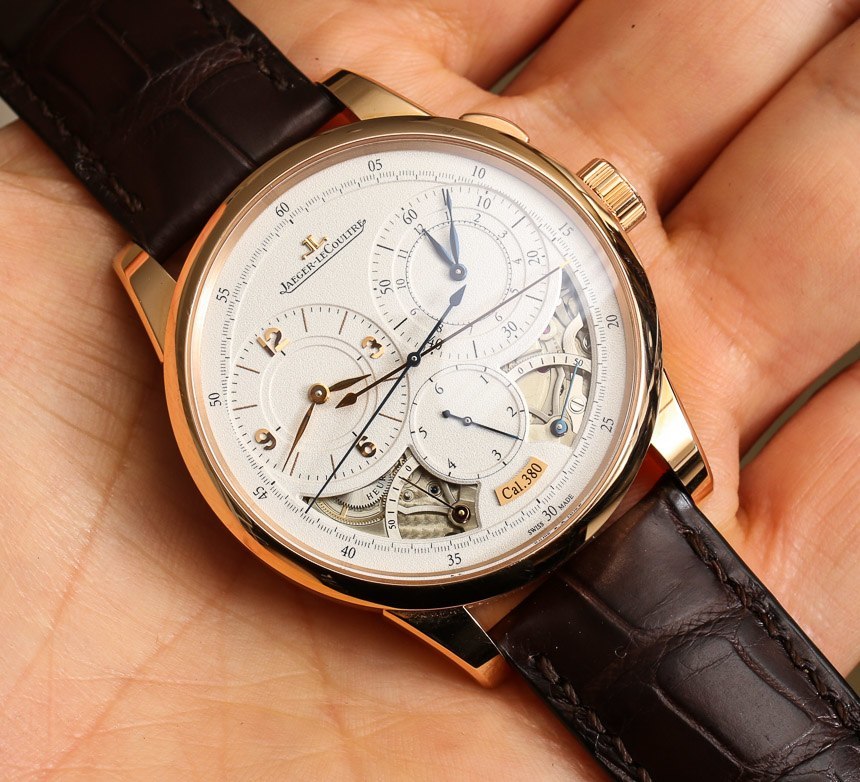