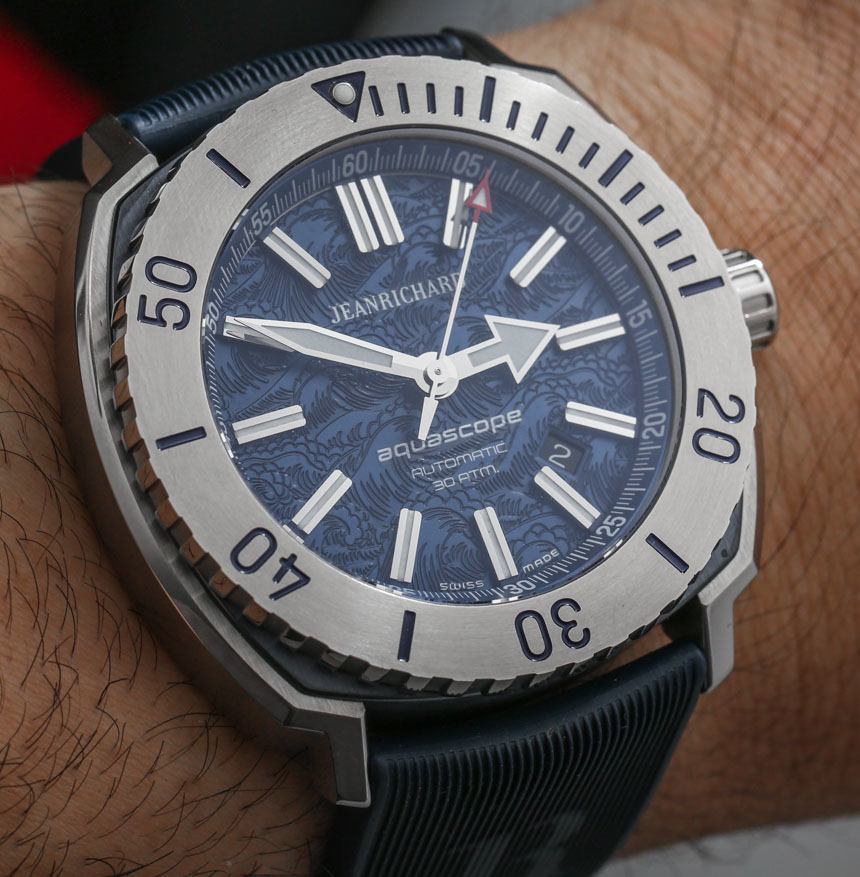 The JeanRichard Aquascope is a handsome Swiss watch that combines a number of interesting design elements and speaks very closely to much of what has been happening in the watch industry over the last few years. Today, I review the JeanRichard Aquascope Hokusai ref. 60650-21M652-FK6A watch. A sub-brand of Girard-Perregaux – and now owned together by the Kering Group – JeanRichard was one of the first Swiss watch makers to see the economic writing on the wall a few years ago that prices were getting a bit too high to sustain the overly ambitious international Swiss watch market. So what JeanRichard did in most markets was decide to reinvent themselves as a lower cost brand that used ETA or Sellita produced Swiss movements versus those made in house.

The watch industry certainly did not need yet another pricey name, and the competition for $5,000 plus watches was just getting too high. At that level, the majority of consumers only purchase timepieces from a few big-name companies – with very little room for everyone else. Now the circa $3,000 segment is booming (again), with brands like Tudor and once again TAG Heuer vying for dollars. This is exactly where JeanRichard is playing its strongest hand, and the signature cushion-shaped case of the Terrascope, Aeorscope, and Aquascope is what the company hopes consumers will become positively familiar with. 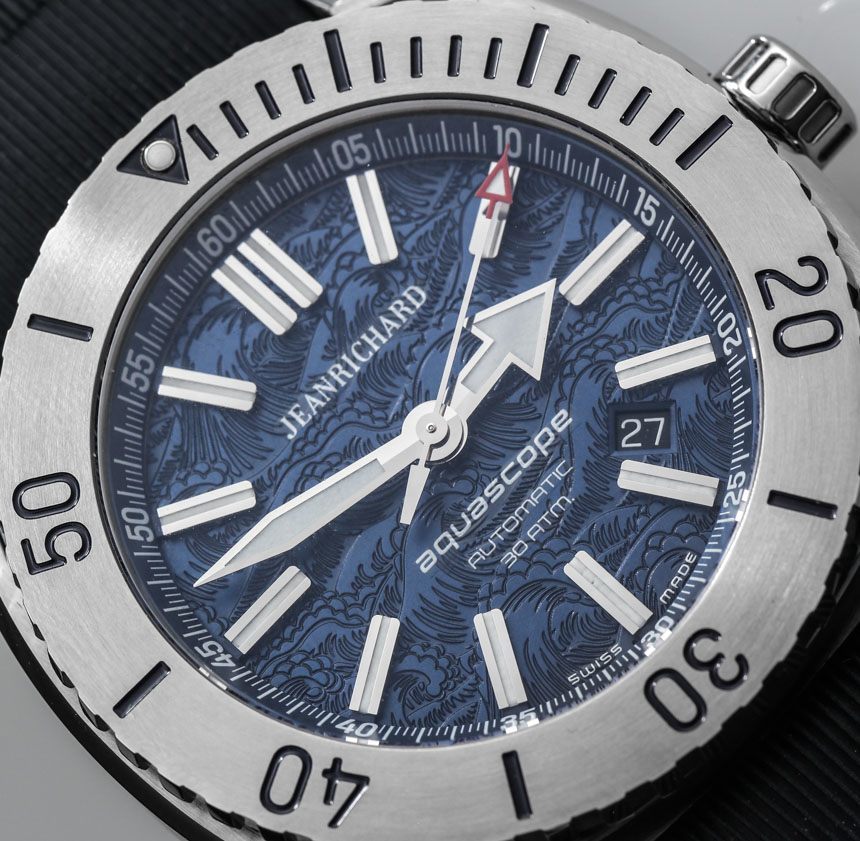 There is very much a “marketing theory” behind the current plan in place at JeanRichard to expand and promote the company. I can’t escape from feeling like there is a business committee behind the current brand rather than one passionate individual, but there is nothing inherently wrong with that. Rolex does that and is doing pretty well. What JeanRichard lacks that Rolex has is a design that people have been gradually conditioned to love for years. Nevertheless. your core 44mm wide JeanRichard case with round dial and easy to see hands is a winning formula.

I’ve recently heard reported that to some people, “JeanRichard is the new Panerai.” I don’t know about that, but in many senses new JeanRichard watches feel like scores out of Panerai’s playbook. While the concept feels derivative, you can’t help but enjoy the results. That means just a few core styles, with JeanRichard mixing and matching colors and materials to create new looks. The basic thesis of the design is to take a slightly more modern approach to the vintage-submersible style of your typical Panerai. JeanRichard first succeeds in a rather comfortable product. 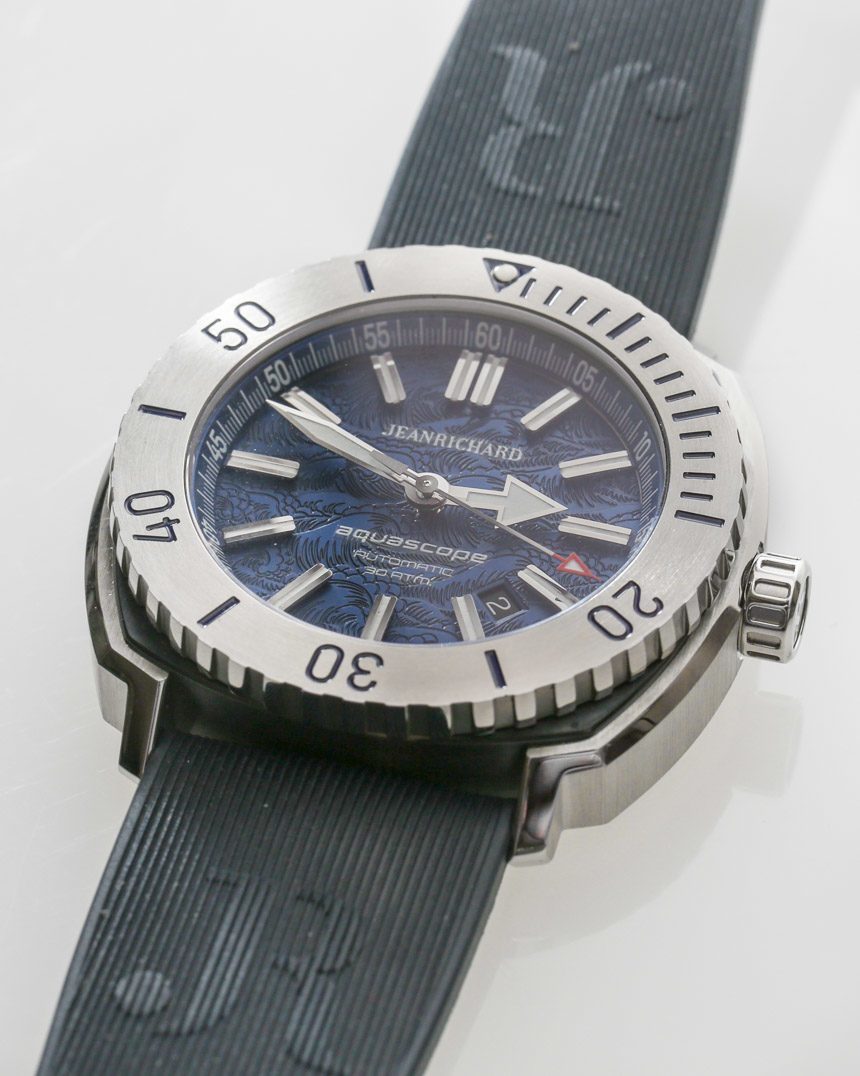 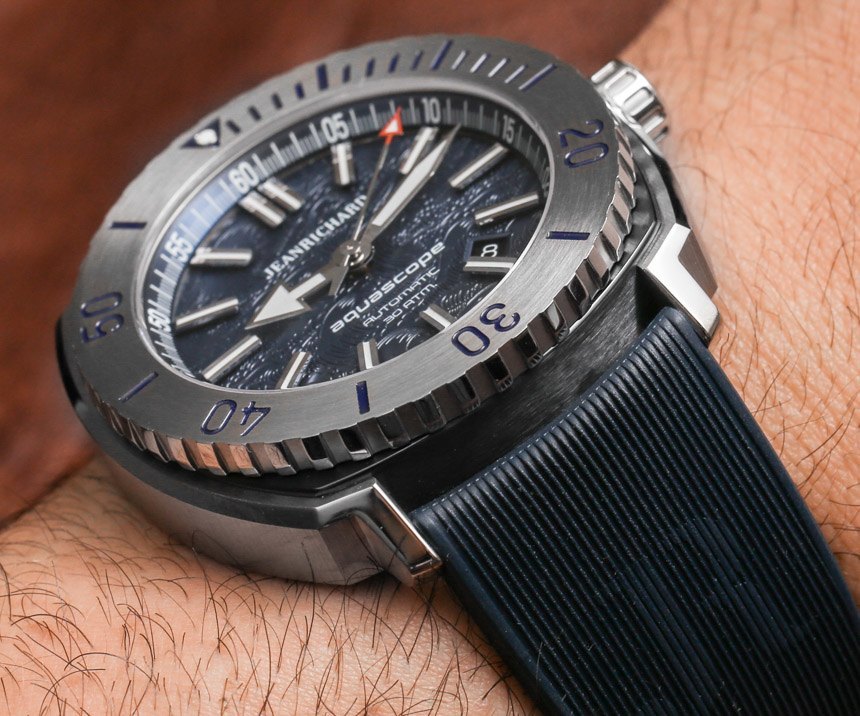 JeanRichard next succeeds in a product that looks good, despite being subjected to a prodigious amount of little tweaks and changes. In steel with a black dial, the Aquascope, for example, looks excellent on most any strap color (similar to many Panerai watches) and dial color changes look equally acceptable. JeanRichard’s basic sports watch design is even so versatile the brand is able to produce a version with and without a bezel to make two distinct model families (the Aquascope and Terrascope), as well as modify the dial a bit to create the Aeroscope collection. Each has the same basic 44mm wide case structure, though JeanRichard does mix up elements such as color and case finishing.

In my opinion, some of the basic Terrascope and Aquascope models look the best. Not only do you get a coherent and versatile design (along with a pretty darn legible dial), but you also get what I think is the essence of the brand. In order to continually have new models JeanRichard plays with the basic concept and offers unique versions such as the (admittedly clever) JeanRichard Aquascope Hokusai collection that I debuted here. Click that link for a bit more background on the Japanese artist Katsushika Hokusai. The watch features the motif of a famous Hokusai woodblock carving titled “The Great Wave Off Kanagawa.” 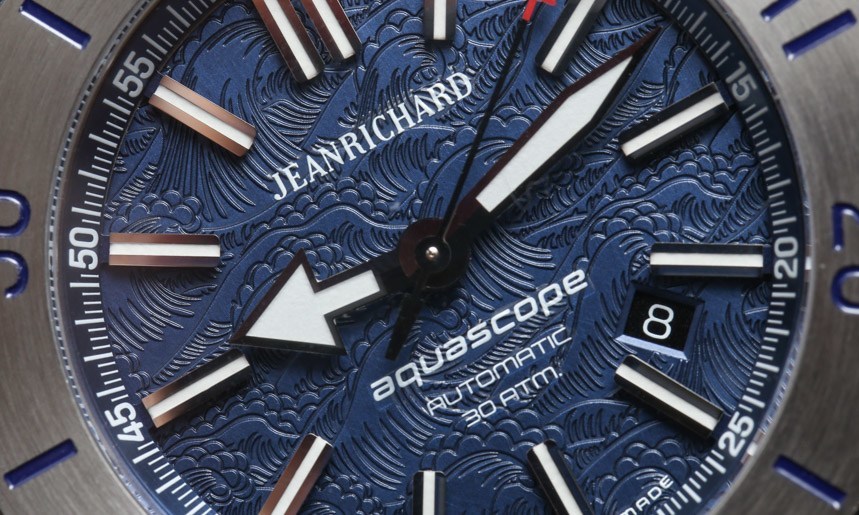 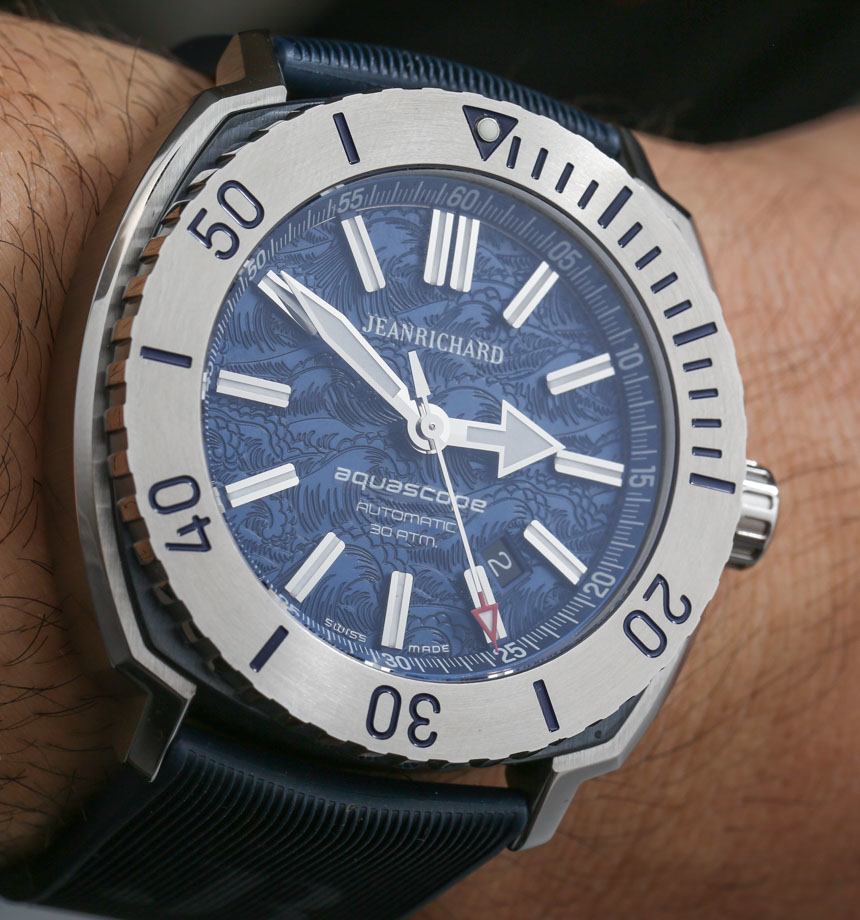 Available in three or four different dial and strap color combinations, the Aquascope Hokusai in blue is perhaps the most appropriate given the subject matter. When I first saw this, I felt like it was a more playful way of doing waves on the dial of a dive watch, as made popular by brands such as Omega and Ulysse Nardin. The Aquascope is a dive watch after all, so producing a blue one with a wave-patterned dial is nothing strange. What is simply cool is using Hokusai’s waves as a means of doing such. Such a concept makes it clear that at modern watch manufacturers you have traditional watch designers working in close collaboration with more modern thinking graphic designers and artists.

In person, the Hokusai wave pattern on the dial of these JeanRichard Aquascope models is pretty cool. I wouldn’t say that the designs “pop” as much as they do in the marketing photos, but the theme of the dial as well as the Hokusai art are not lost and neither is any significant dial legibility. Being a bit of a Japan-lover (Japanophile), as well as a fan of Hokusai’s art and traditional Japanese woodblock carving, I knew that little could sway me away from disliking this watch. Especially since the JeanRichard Aquascope is a timepiece I’ve felt positively about for a few years now. 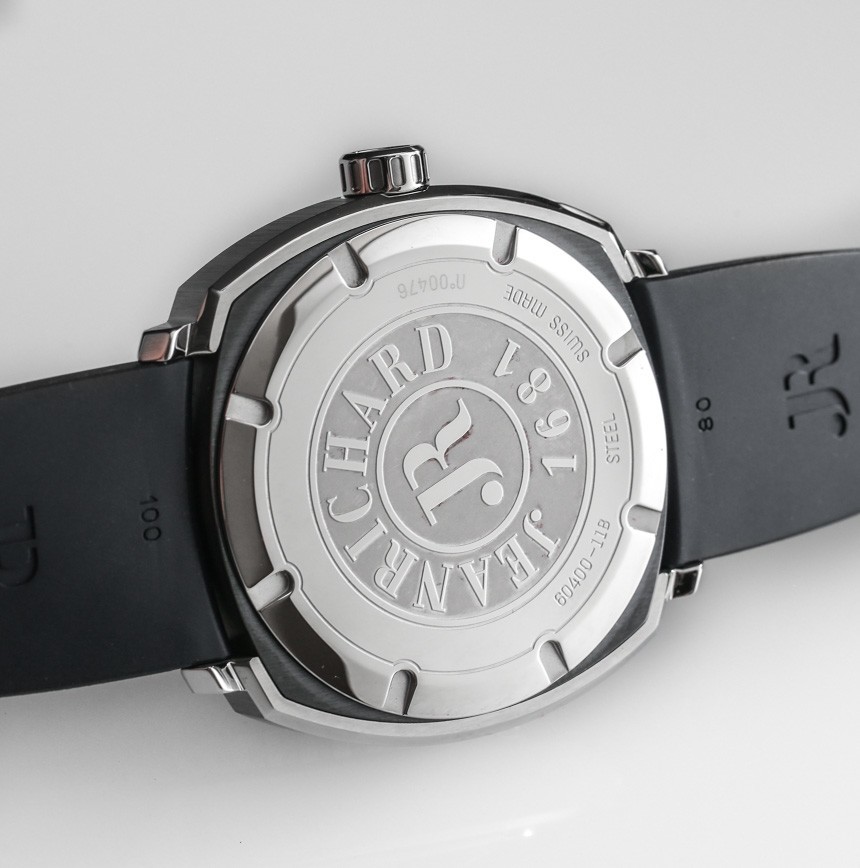 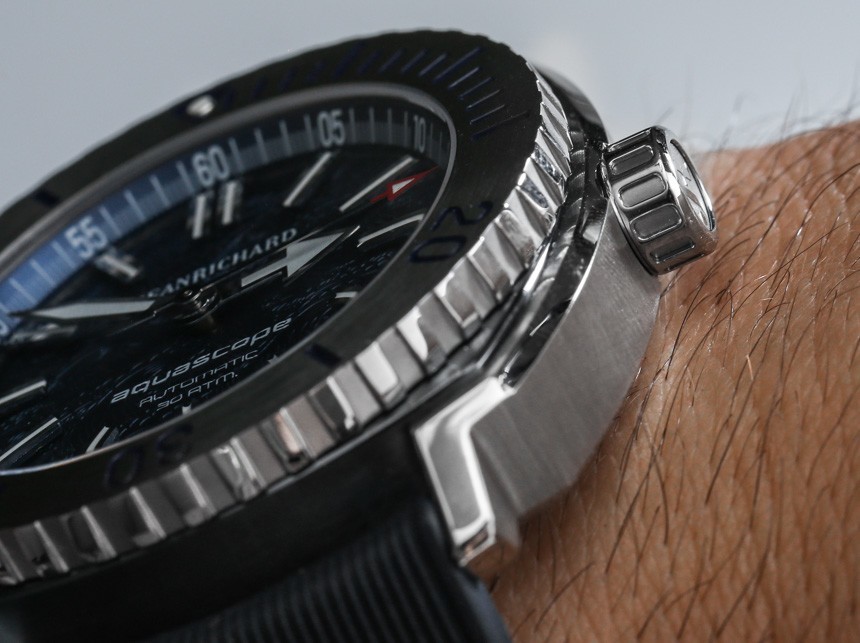 The Aquascope dial is remarkably legible but unsurprisingly so, thanks to the large applied hour markers and generously sized hands. I really like the combo of the very stately arrow-shaped hour hand and the sword-style minute hand. The dial is also generously lumed and well balanced, with an attractive flange ring where the minute markers are placed. Over the dial is a flat AR-coated sapphire crystal, and around it is a uni-directional rotating diver’s bezel. I also happen to like brushed steel rotating bezels – which the Aquascope in this form has.

A close look at the construction of the 300 meter water resistant case allows you to see that the middle section is actually colored black. It is sort of silly how easy this element is to see for even a few years of wearing one. The rear of the watch is screwed down, but not very interesting. The engraving feels a bit simple and beneath what a $3,000 plus watch should have. Inside the JeanRichard Aquascope, as well as in three-hand Terrascope and Aeroscope models is a Swiss ETA or Sellita automatic movement. Though JeanRichard calls it their caliber JR60. 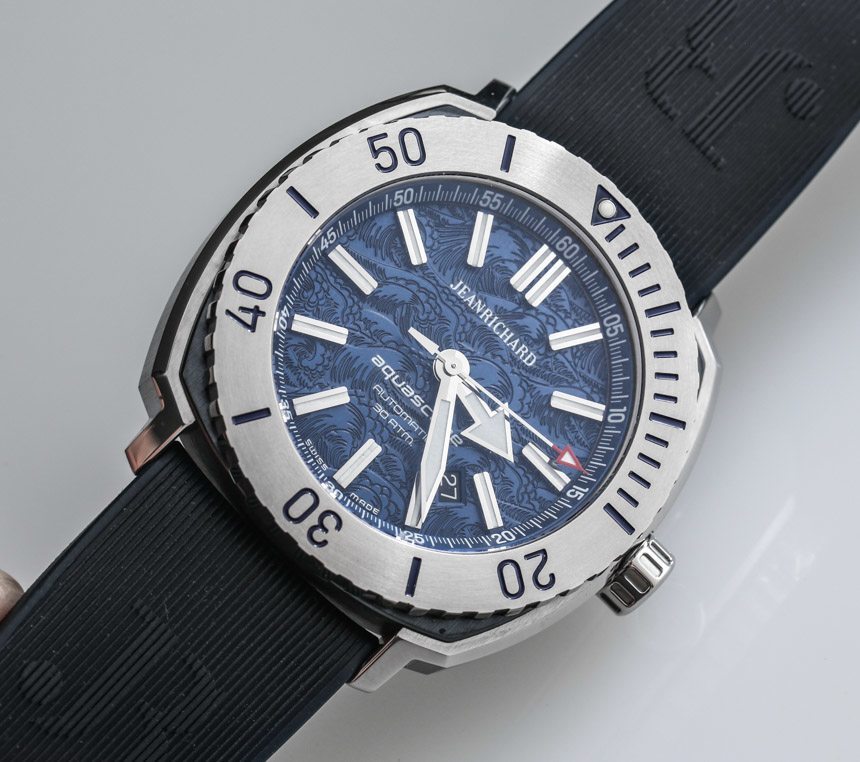 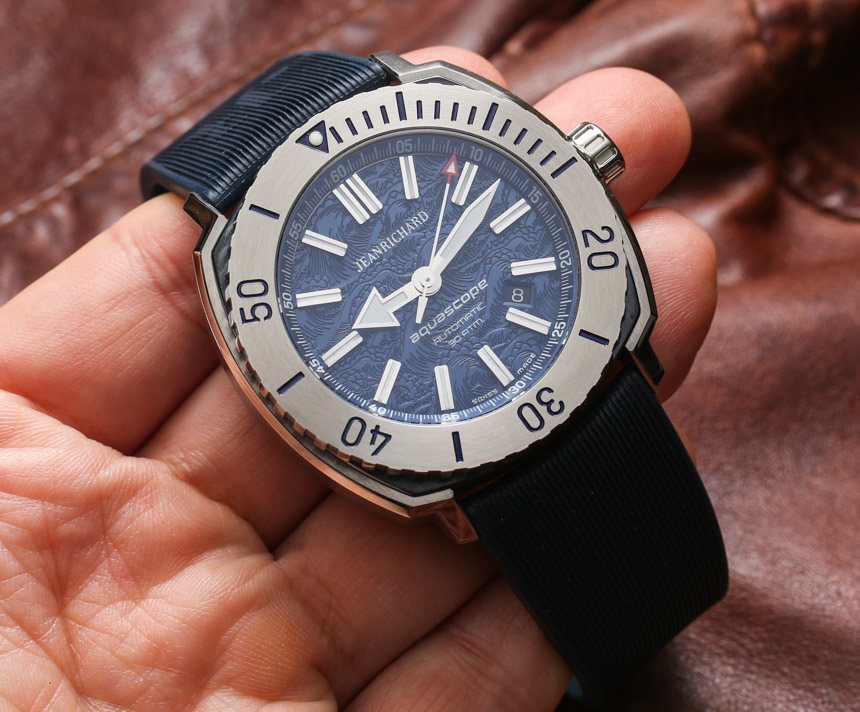 I mentioned that despite the larger size of the Aquascope case, it is rather comfortable on the wrist. Part of this is due to the broad, flat caseback as well as the not-too-chunky case thickness of 13.5mm. JeanRichard matches the JeanRichard Aquascope Hokusai with a blue rubber strap that has a vertical linear texturing and has a deployant clasp. JeanRichard themselves actually sells some rather interesting straps, so I wonder what else would go with this particular watch.

One of the most important questions the JeanRichard Aquascope Hokusai asks is whether or not you should get one if you already have an Aquascope or a Terrascope model? I would say probably not, unless you simply have to have it. The downside of JeanRichard having so many models which are the same is that they don’t necessarily give the enthusiast watch collector a lot of reason to buy one of each, even though I am sure there are people out there with a box full of JeanRichards. At the same time, if you’ve been holding out on getting something from JeanRichard because they lack just that little extra something – then this model Aquascope with the attractive Hokusai-inspired dial might be just the thing. I know that for someone like me, this little extra push is all that it would take. Price for the ref. 60650-21M652-FK6A JeanRichard Aquascope Hokusai watch is $3,100 – which is less than we originally anticipated. jeanrichard.com

Necessary Data
>Brand: JeanRichard
>Model: Terrascope Hokusai Ref. 60650-21M652-FK6A
>Price: $3,100
>Size: 44mm
>Would reviewer personally wear it: Yes
>Friend we’d recommend it to first: Modern sport/dive watch guy looking for a good excuse to venture into JeanRichard territory.
>Best characteristic of watch: Hokusai “Great Wave” style dial is both clever and aesthetically successful. Overall, Aquascope watch design is attractive and very useful.
>Worst characteristic of watch: Even at the “reasonable” price of about $3,000, this is still a lot to ask when weighing up the components and competition.