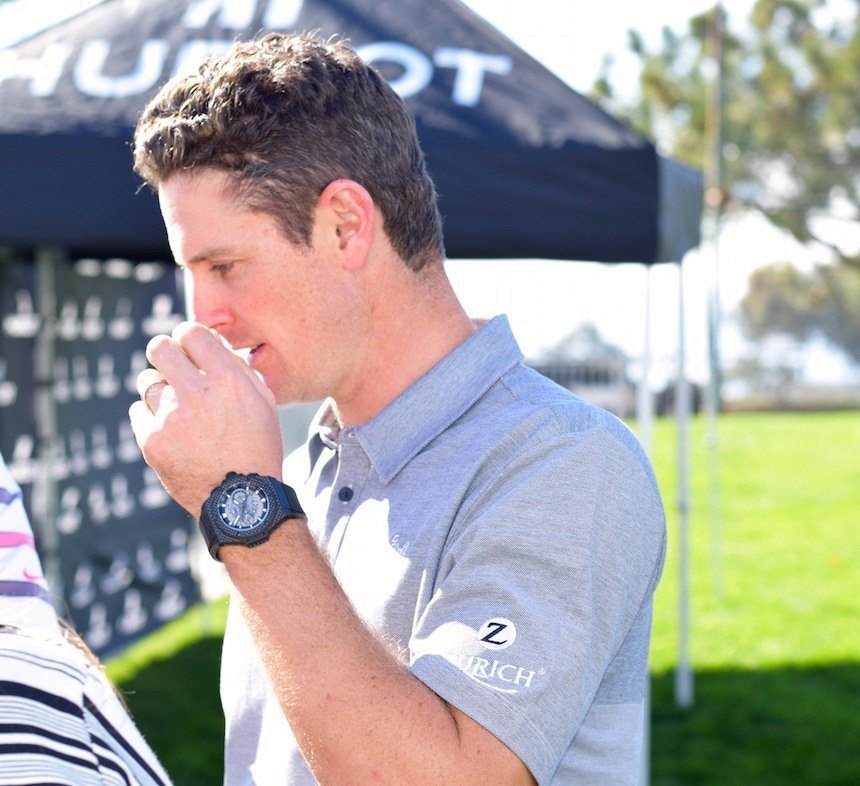 At the recent 2015 Farmers Open PGA championship, Hublot announced 2013 US Open Champion Justin Rose as its newest ambassador. While Hublot is not new to the concept of famous sports figures as ambassadors – as this is the brand who counts Pelé, Diego Maradona, Kobe Bryant, Dwayne Wade, Usain Bolt, and many more in its legion of ambassadors – this meant the first time Hublot had entered the lucrative sport of golf and got a champion to join its ambassadors’ ranks.

The event was done near the practice range of the famed Torrey Pines public course in San Diego, California. Accompanying Justin Rose was Matt Kemp, the long time LA Dodgers baseball player, who recently joined the San Diego Padres. As a self-proclaimed WIS (internet watch forum slang; Watch Idiot Savant) and Hublot fan, Matt was there to help introduce Justin Rose and help him win some money for his charity. 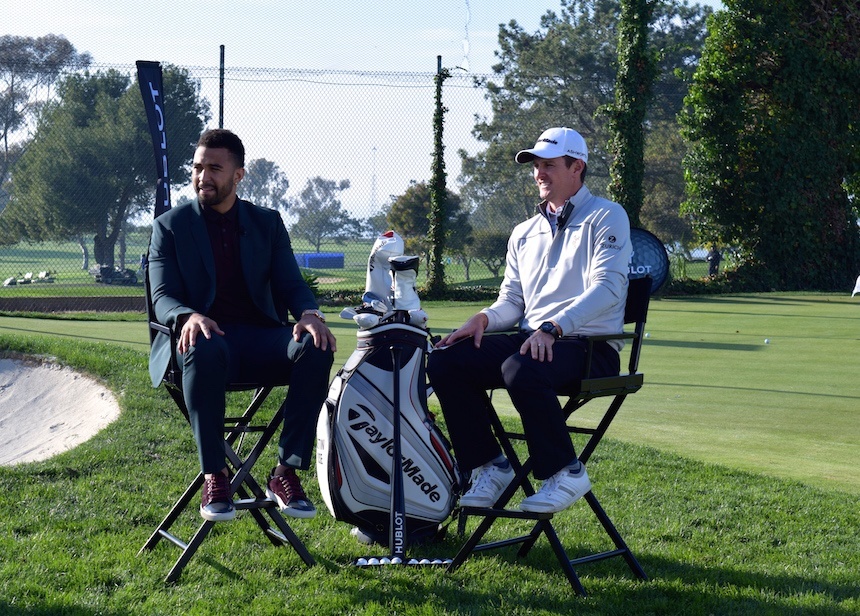 As in many things Hublot, the sense of fusion and love was in the air. In particular, the brand’s North American manager, Jean-Francois Sberro, introduced the event and the two stars of seemingly diametrically opposite sports, as representative of the art of fusion that Hublot is known for. After a quick Q&A between the two athletes, there was a fun competition (if you can call it that) on the green where Matt and Justin took to each other in trying to sink putts for Justin Rose’ charity. All in all, Justin Rose took $10,000 courtesy of Hublot, for his Kate and Justin Rose Foundation, whose mission is “Feeding Hungry Tummies and Curious Minds.” 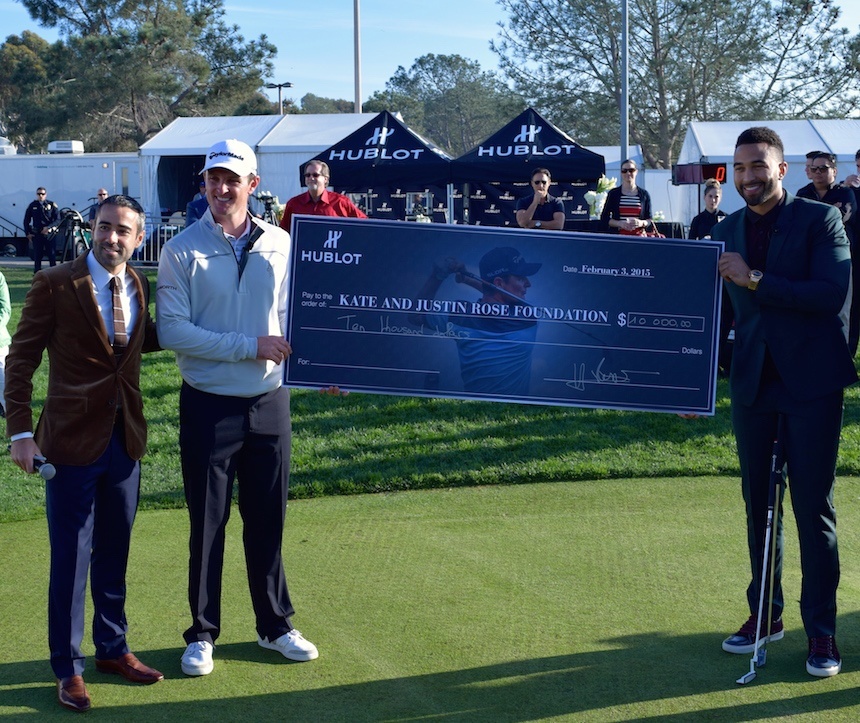 While the event was certainly highly scripted, what was not and felt genuine was Justin’s candid and kind demeanor. Also, both Matt and Justin Rose seemed to be genuinely passionate fans of the brand while sporting their Hublot watches with pride and affection. I got a chance to talk to each of them, and although the conversation was short, it became clear to me that Justin Rose had personally acquired his watch as a present to commemorate his win in Dubai – and that was when he discovered the brand, actually before Hublot approached him. A similar situation transpired with Matt who perhaps acquired the watch-bug via his other ball-player colleagues in the locker room. 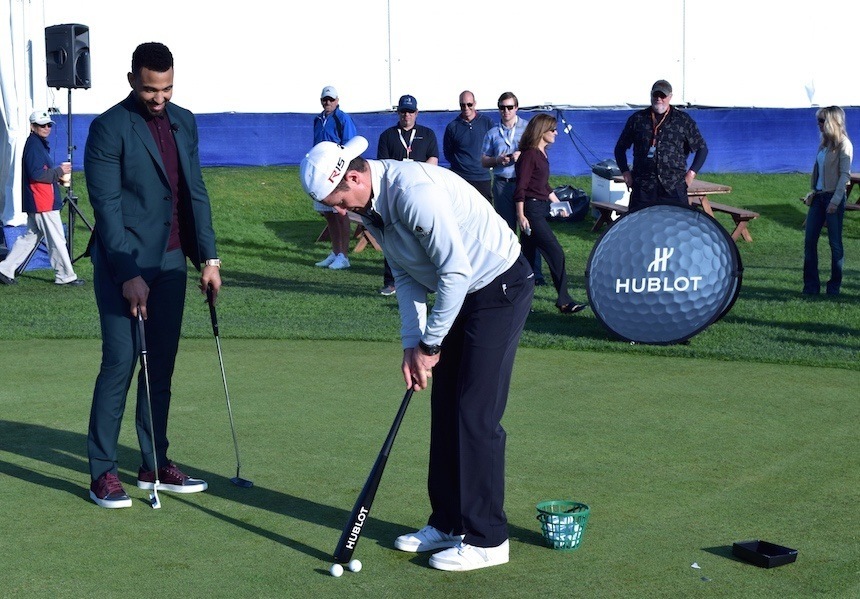 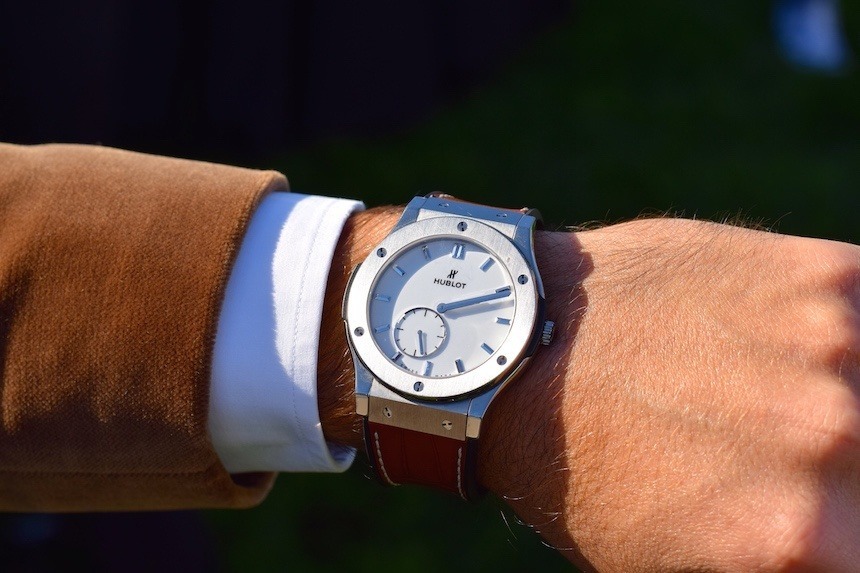 In many ways, one cannot be surprised that athletes would be WIS, since a big part of the lifestyle of athletes outside of the ballpark or the golf course, is to attend and be part of fashionable events. And since many share the belief that the only form of acceptable jewelry for men is a watch, male athletes, like us other WIS, are quick to catch the watch-bug from their colleagues and friends. It’s also natural when you are part of a system that tends to significantly overpay star players during their peak years, resulting in huge amounts of disposable income, even after lavishly spending on the necessary things, like houses, cars, and taking care of family members. 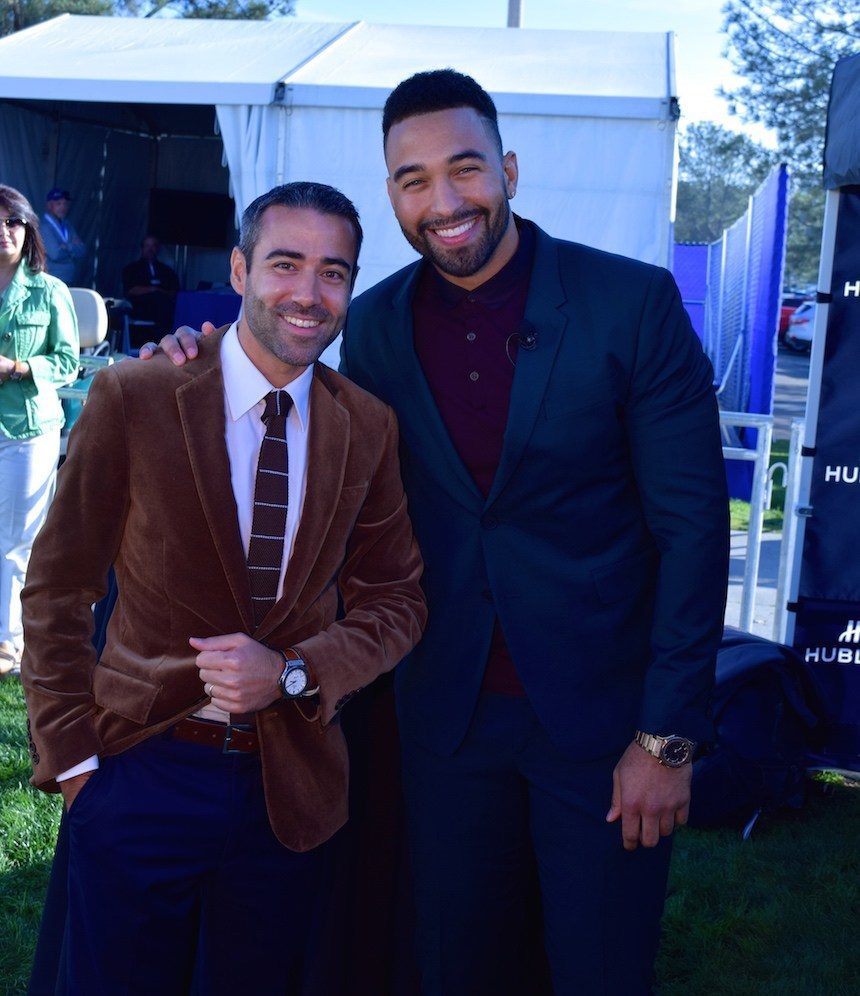 Is that really a wrong thing? As far as I’m concerned, not at all; so long as athletes are not seeing the watch purchases as investments. If they view it like most of us WIS do, in the light of enjoying a luxury item and helping them with their sense of style, how can one argue with that? Watches from Hublot, while polarizing to many collectors, are natural to those, like affluent athletes, who are first getting into watches. Why? Well, Hublot watches are not that common (at least not when compared to some other names like Rolex, or Omega, or Breitling), yet have a variety of offerings covering a wide range of options – as well as novel materials – that make for the possibility of one finding his/her favorite model for self-expression, while not having to give up the “statement-factor” that comes with such an instantly recognizable brand. This, altogether, is a complete package that appears sure to attract a modern athlete. 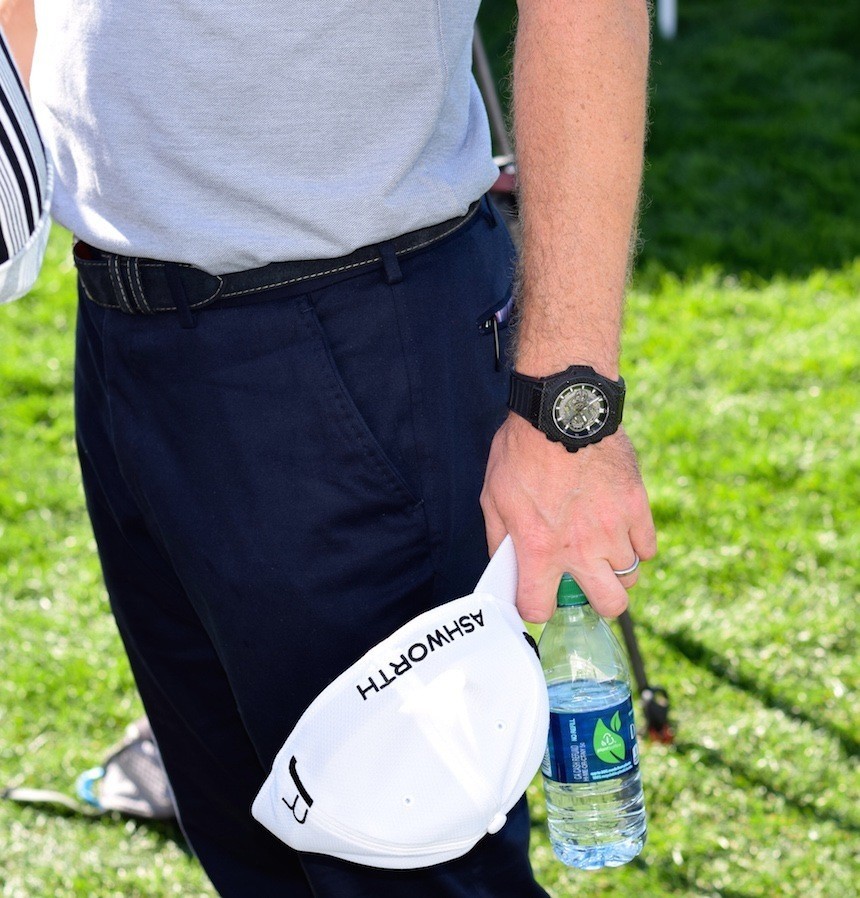 And, perhaps most importantly, let’s not forget that a professional athlete is typically bigger than your average-sized human for the same cohort. This goes without saying, since excelling for years at a sport not only means competing with the best along the way, but also being able to surpass the best humans for that activity – which automatically will select for those bigger, faster, taller, quicker, and with the most stamina. This translates into people in the larger part of the scale size of humanity and thus with, on average, larger wrist sizes. A perfect match for Hublot, who has never shied away from producing watches for the large-wristed.

With that, Hublot continues with its assault of infiltrating all types of sports. While this might not win the approval of many WIS, it will more than likely continue to make Hublot successful and help sell more watches. Can you fault the good folks from Nyon, for capitalizing on this winning formula? Even if it’s designed for a small segment of the population… I think no. On a very personal note, I never want to be the person hating on others’ success. In fact, I strive and try to applaud it and learn from it instead. 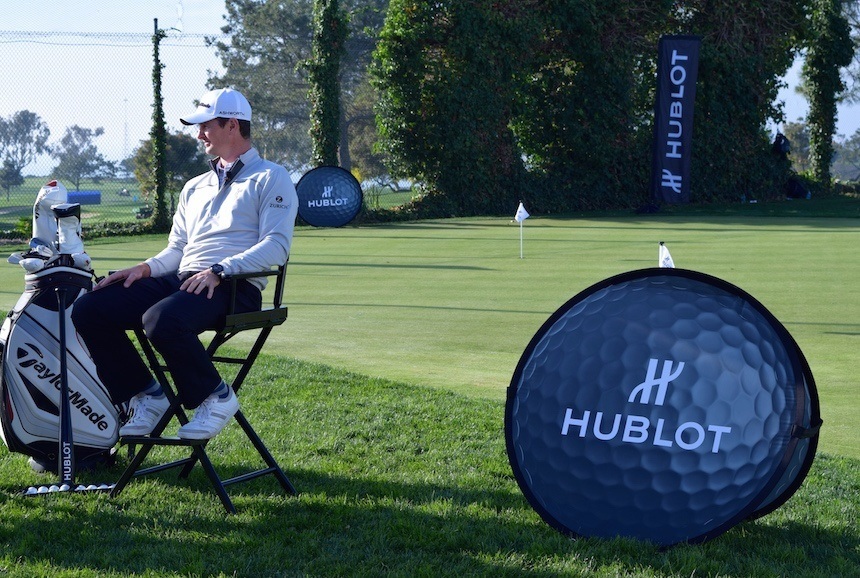 Another thing worth mentioning is that while it is unclear just how many hardcore watch-lovers Hublot will keep on attracting to its corner, it is easier to guess when it comes to the affluent people who feel an attachment to one of the many sports, partner companies, or ambassadors in Hublot’s stable. To give you an example of how I found that to translate into reality, let me share a personal experience of mine with you. At the event, I got a chance to talk to a proud owner of a recent Hublot Ferrari watch, and he was attending the event more as an Hublot lover than a golf or a baseball aficionado. He proudly wore his watch, and when I introduced him to Jean-Francois, seeing them discuss their Hublot watches, I could see right there the power of fusion that Hublot is so adept at using. 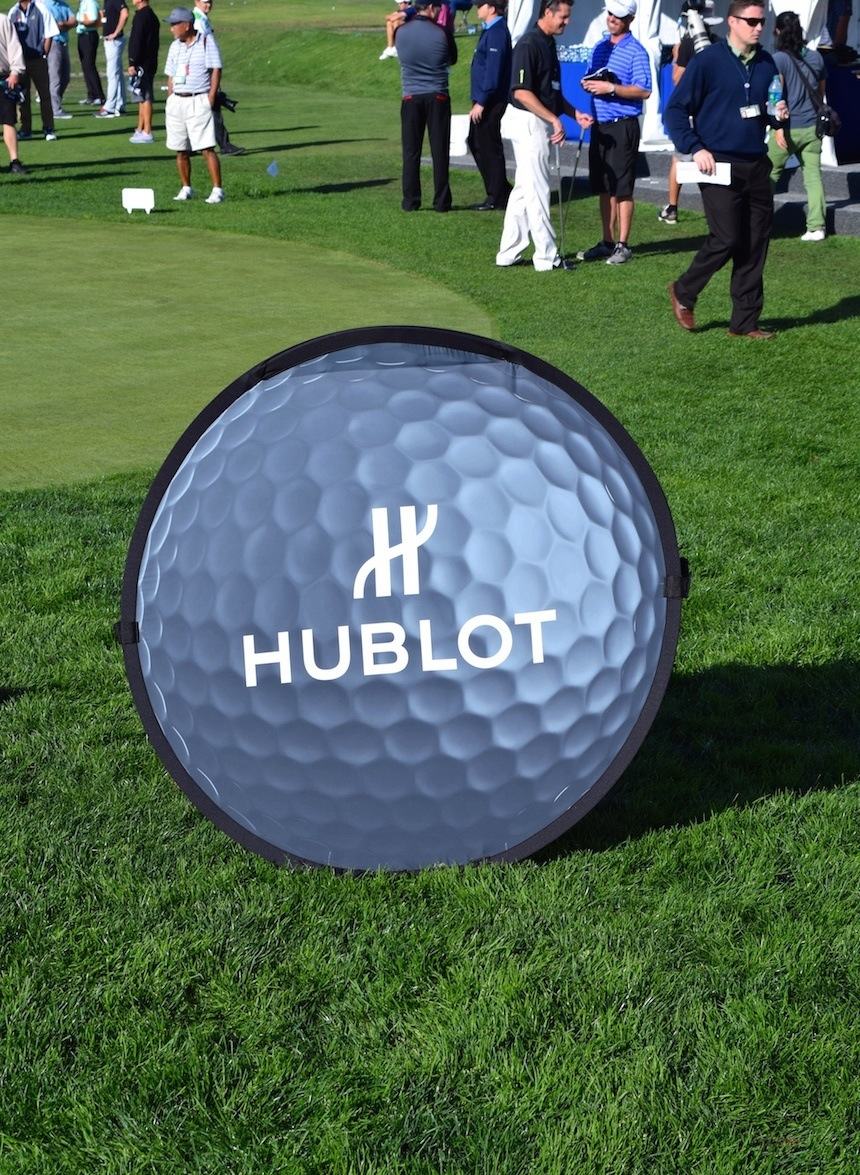 Here was a passionate Ferrari collector, who extended his passion to watches and proudly wears his Ferrari and Hublot branded timepiece in a situation outside of his current passion, but as a reminder of where his hobby and his heart reside. Hublot, by fusing, in this case, Ferrari ownership with its complex mechanical timepieces is bringing along a new class of watch collectors. So, when Hublot does the same for golf – as they did when they picked Justin Rose as their newest ambassador – they are attracting a new group of passionate people to our watch-loving ranks. And I believe we all can be happy about that. hublot.com