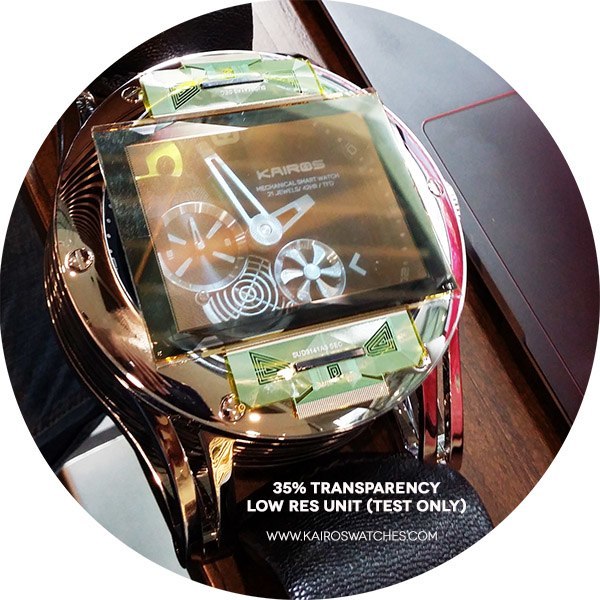 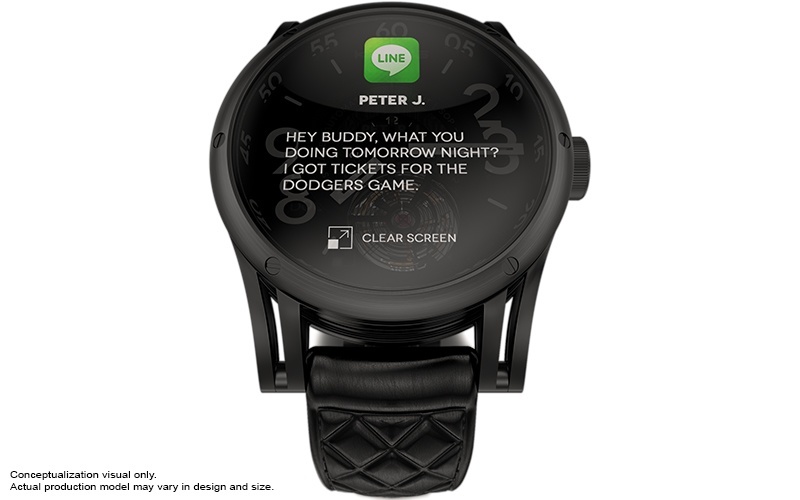 The Kairos smartwatch announced recently combines the best of both worlds. A smart watch, and a competent mechanical watch. Smartwatches, as we’ve seen before, are hard to make well.

One of the arguments against smartwatches has been, “mechanical watch companies have been doing this for over 100 years, and you aren’t going to wipe that out with a pretty LCD, quartz crisis notwithstanding.”

As an aBlogtoWatch exclusive, we’re able to share with you a new model of Kairos watch that you won’t see anywhere else. The SSW 158 in all black finish. Sam Yang, Founder and Managing Director of Kairos Watches told us that this model and finish was in high demand. The SSW 158 is equipped with a Swiss movement.

Yang says, “I just wanted to create a smart watch for the ‘non-techies’ of the world who want to get smart watch functions.” Kairos’ first release is a watch that combines a smart watch operating system (Android Wear (which we covered here) or a possibly a custom-made Kairos OS. We may know more once Android Wear is publicly released to developers.) and either a Swiss Soprod or Miyota mechanical movement. One of the goals was a watch that a businessperson wouldn’t be embarrassed to wear in a meeting. 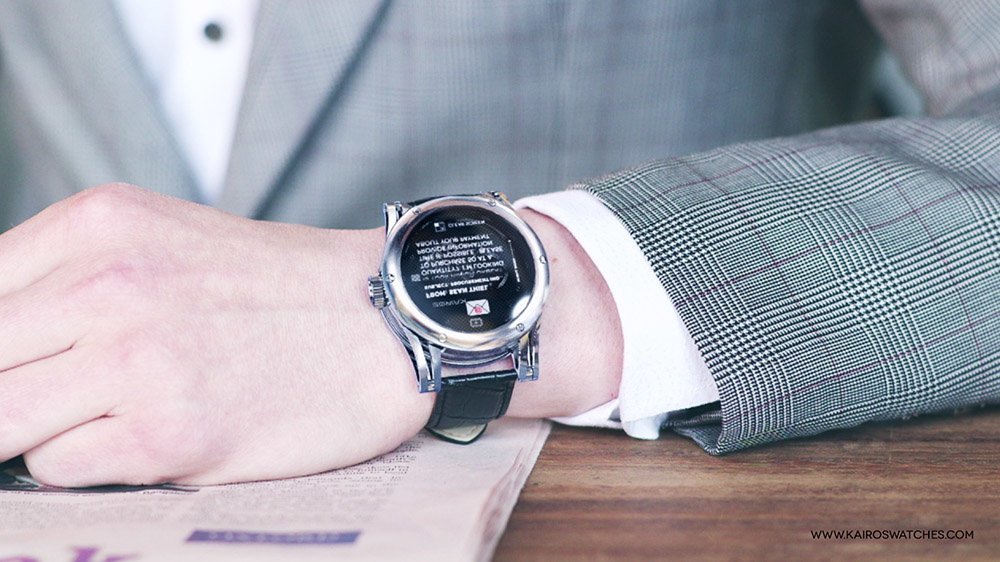 The difficulty with smartwatches as they attempt to find their way is this: so far, they aren’t high-end luxury items, and they tend to augment a smartphone rather than deliver something you couldn’t do before. Some smartwatches focus on the “smart” at the expense of the “watch.” 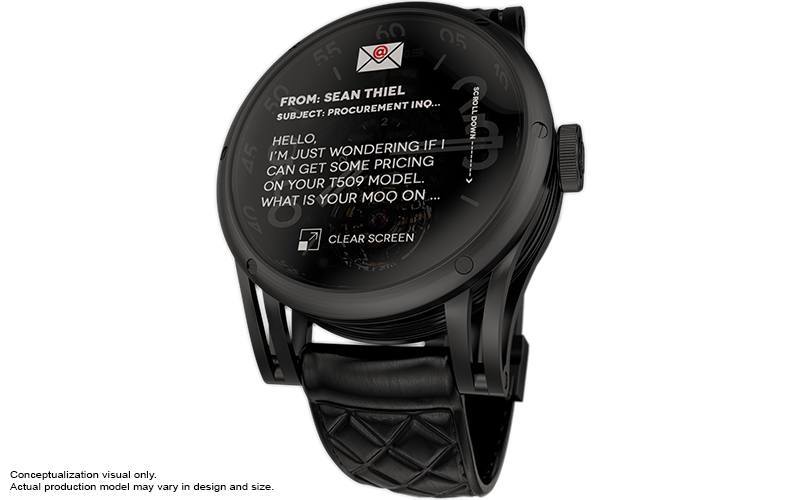 Kairos has taken a different approach. They’ve chosen to combine the best of both worlds. The company has a number of models, with different case finishes, and a choice of two mechanical movements. The mechanical movement is either a Miyota or Soprod, both with 42 hour power reserves.

The watch is targeted at people in their late 20s to early 40s, people who grew up with desktop computers and remember changing out fans, power supplies, and RAM. The details on the dial and case are meant to recall these parts. The mesh cover above the open heart represents the fan cover found in a desktop computer. The fan blades indicate the seconds passing. The dial is made to look like a PCB, or printed circuit board, and the side of the case looks a little like the coils you might have found water-cooling a CPU. “Each brand has a story,” Yang says. “For Kairos, I wanted people who are techies at heart, but who also have a sense of style and class.” 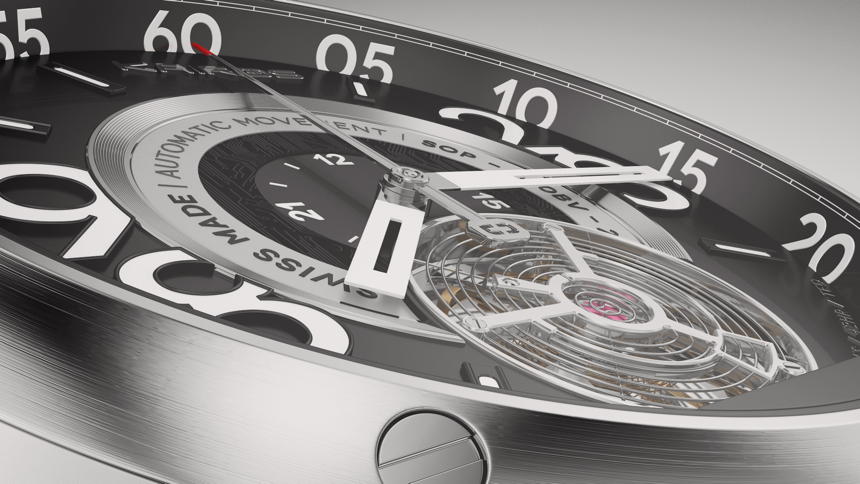 How exactly do you turn a mechanical watch into a smartwatch, especially without hiding the mechanical movement that makes it worthwhile? You do something complicated. If you’re Kairos, you put a transparent touchscreen above the mechanical dial, so that the balance wheel can be seen beneath the screen. You connect the screen with contacts that run across the side of the movement to a circuit board below the mechanical rotor. Then, you place a rechargeable battery with a projected 5-7 days worth of battery life below that circuit card. Recharging is provided by a custom USB cable. 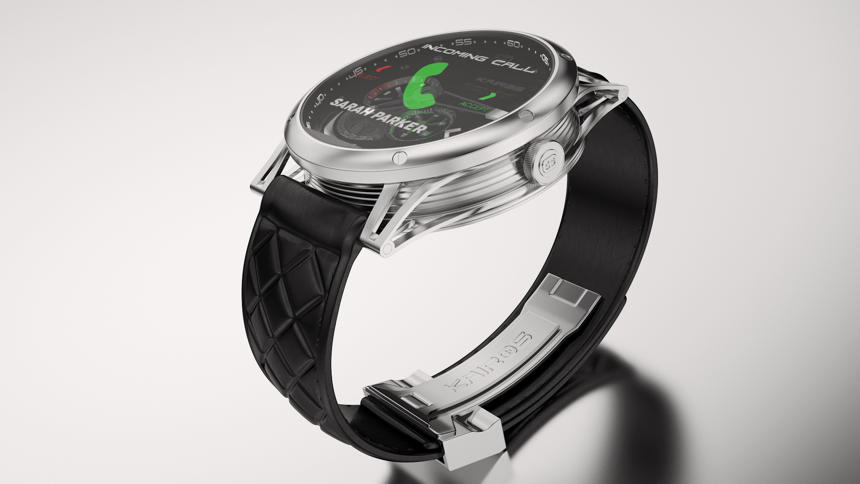 Android Wear, which Kairos hopes to include, isn’t some very small OS borrowing the Android name, it’s Google’s project based on the same software development kit. Android Wear, like Google Now on Android and iOS, is intended to provide “information that moves with you.” It offers the wearer some of the same kinds of suggestions based on time, location, and habits. Just like Google Now, when you drive somewhere consistently every morning, it will start to offer traffic and routing information before you leave the house, and ask, “is this your work?” If you’re riding on public transportation, it will tell you how many more stops until your destination. Also expect to be able to answer phone calls, start navigation, and read and reply to emails. Android Wear appears to have functionality similar to Google Glass. 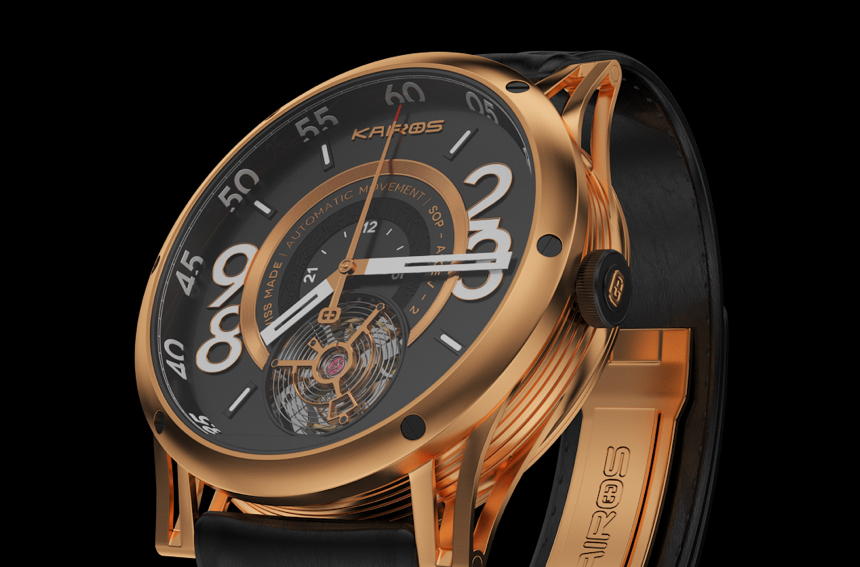 One of the smart things about this solution is that it won’t suffer from the usual smartwatch issue. For most other smartwatches, when the battery runs down, you can’t tell time. Here, the mechanical portion obviates that problem. Also, because you don’t need to run the LCD and smart functions all the time, the display can sleep and conserve battery life.

The smart functions are some of the ones you’d rightfully expect from a smartwatch. Using Bluetooth Low Energy, you get email, phone, and application push notifications, a pedometer and a measure of how many calories you’ve burned over how long a time period. In the time department, it has a chronograph, stop watch, and GPS-enabled world time function. Somewhat unusually, it also acts as a remote control for your phone’s camera, music, and has the ability to send pre-set text messages while you’re driving.

One of the difficulties Kairos has had to overcome is the transparent display, and getting it just right. The following are pre-production units, CNC and 3D printed prototypes. What’s important to pay attention to here is the transparency of the screen when looking at those substantial mechanical watch hands. Sam Yang tells us that these prototypes are less transparent than production units, and that the improvement comes, in part, from placing the screen closer to the face. In one of the prototype pictures, the screen is on top of the watch, with another layer of glass underneath it. We included these pictures to give you an understanding of the work going into making these smartwatches. 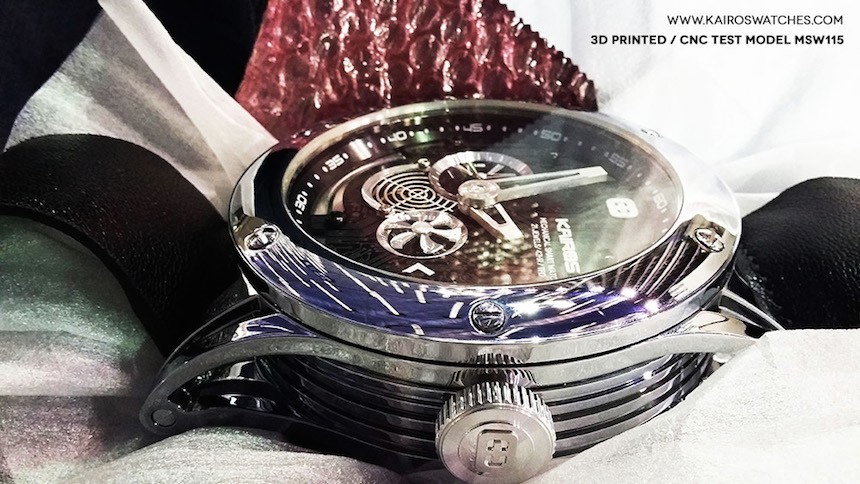 We haven’t had an opportunity to go hands-on with the Kairos smartwatch yet, but the lugs appear to be long and contoured to fit the wrist comfortably. We’re looking forward to spending some wrist time with it as the company gets closer to shipping.

The watch is a little tall at 16.5mm, but this is understandable, given how much is layered inside the case. Yang has told us that this height is not final and they are working to reduce it before they enter production. It uses 22mm straps, and comes with a leather band. Kairos has no shortage of options, offering the two aforementioned movements, the case finished in stainless steel, gold, or all black. You also need to choose whether you want a TOLED (40% transparency, fully animated, Android Wear) or an ICON display (60% transparency, static icons, text and numbers, Kairos OS). Amidst all these choices, the first one you’ll make is whether you want the Miyota-powered MSW115, or the Swiss Soprod-powered SSW158. The Kairos is available for pre-order at 50-60% less than MSRP through July 1, 2014. Pre-orders placed after July will be at the higher price, to be determined. The MSW115 is $499 (steel) or $649 (gold or black) and the Soprod-equipped SSW158 is $989 (steel) or $1199 for gold or black options. kairoswatches.com