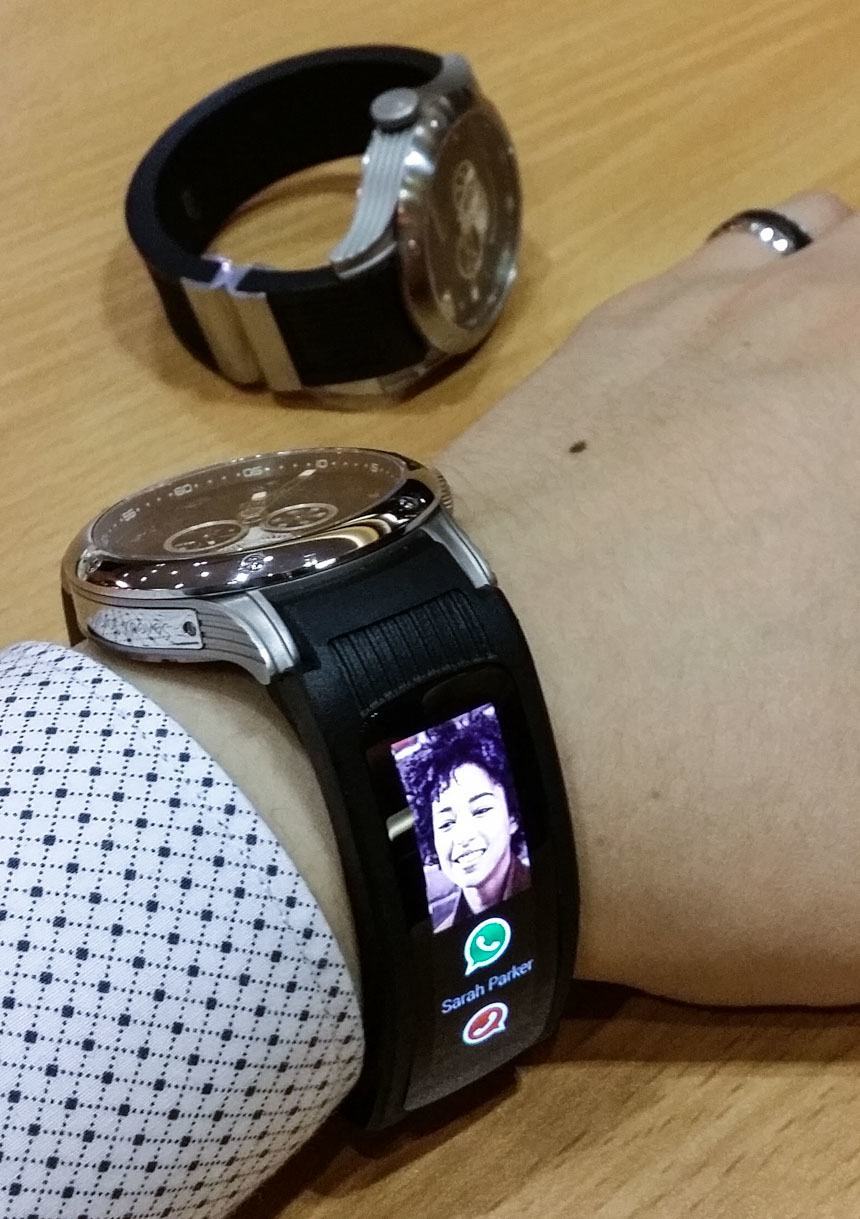 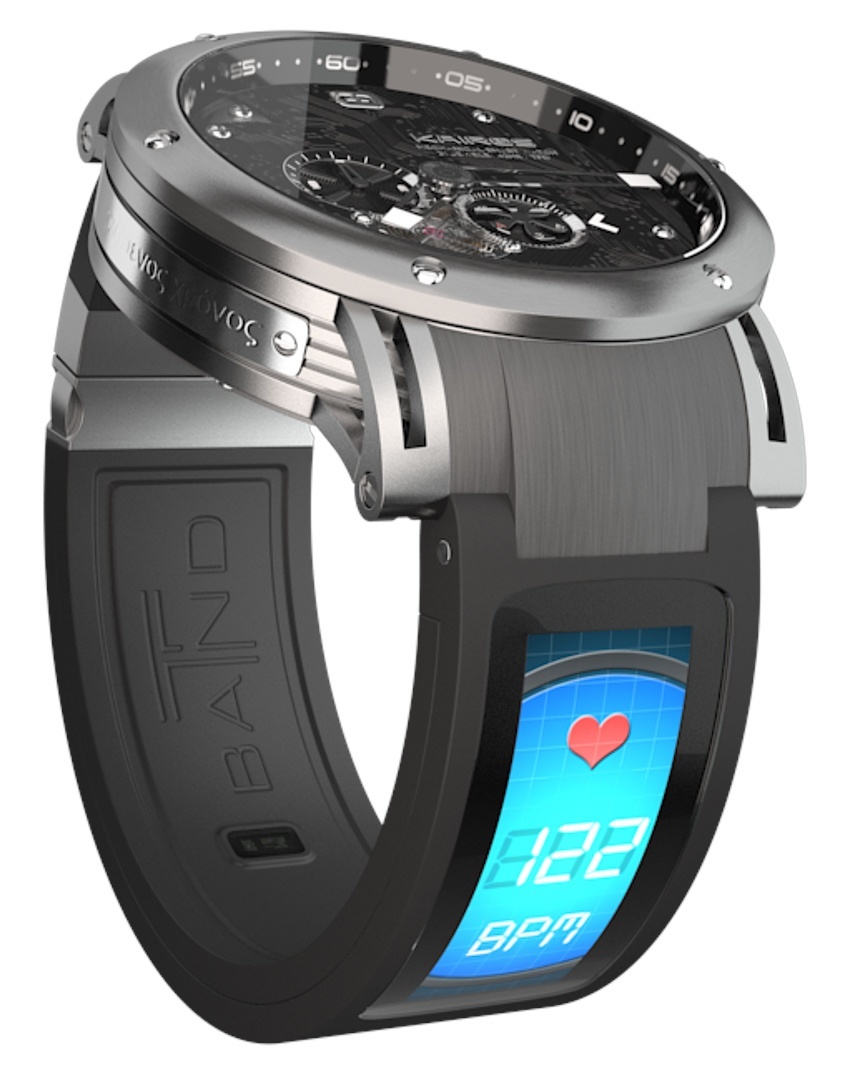 The Kairos T-band is a clever product that many people have considered but one that hasn’t come to production yet (as far as I know). What is it? It is a replacement for your normal watch strap that is actually a “smart band” device. The problem the Kairos T-Band is trying to solve is allowing traditional watch wearers the ability to enjoy the benefits of connected smartwatch technology without having to replace a traditional timepiece that they may love. The Kairos T-Band is essentially a replacement strap for timepiece that includes a touch screen, battery, and hardware to offer the various functions people want from a connected wearable device.

You may have heard of Kairos based on our coverage of the brand back in June 2014. The Kairos concept was to produce a “hybrid” smartwatch that also includes a mechanical movement. A transparent touch screen was meant to sit over a traditional watch dial that was powered either by a Swiss Soprod movement or a less expensive Japanese Miyota movement. As of November 2014, the Kairos hybrid mechanical smartwatches are not yet available for sale, even though the Hong Kong-based development team is keeping fans regularly updated on their Facebook page with the development process. Kairos, like most of today’s other start-up smartwatch makers, seems to be beset by production delays, so having to wait a long time after a successful crowd-funding (and additional investment) for the product is nothing to be surprised about. Having said that, Kairos stresses that their engineers are being particularly picky about overall quality and performance, and that Kairos hybrid smartwatches should begin to ship in either January or February of 2015. 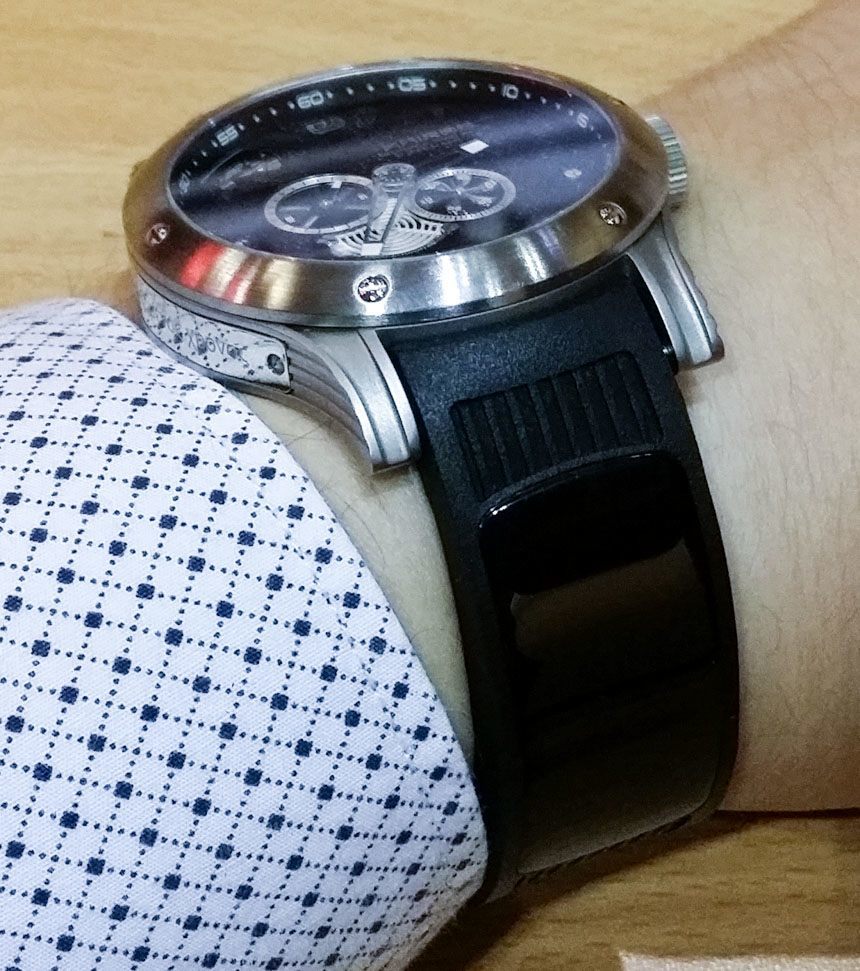 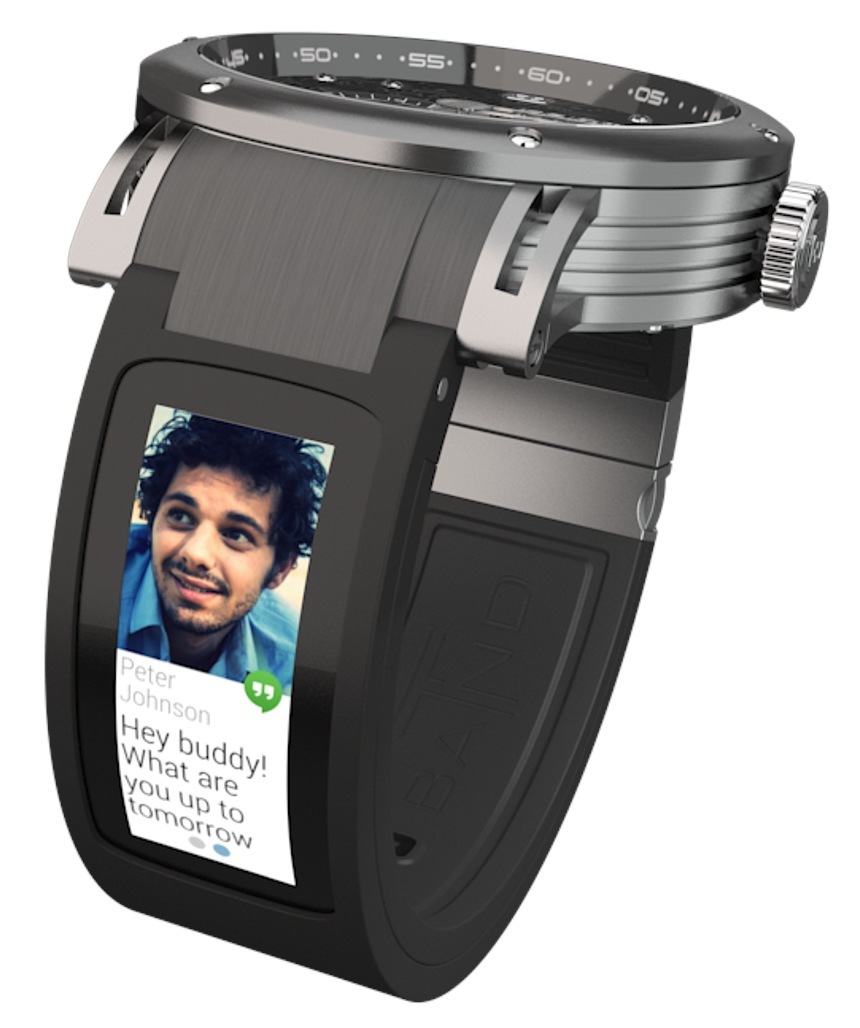 Kairos founder Sam Yang informed me that he actually had the idea for the Kairos T-band prior to launching the funding campaign for the watches. “T-band” apparently stands for “transformation band,” and, in his words, is what the T-band does to a traditional (mostly analog) watch. For him and many other watch lovers, being able to continue wearing beautiful mechanical watches is very important. My personal feelings are that the majority of smartwatches worn today and in the next few years will not be worn by people who are used to wearing watches on their wrist, but will rather occupy “empty wrist space.” In order to get watch lovers to wear a smartwatch, the device must be extremely compelling. Or as Yang sees it, perhaps you can have both.

In my opinion, it will not take traditional watch lovers a lot of convincing to try something like the T-band. To start, Kairos as a company is founded by a watch lover who understands the reasons why smartwatches will not fully replace traditional watches, as well as the importance of design. The Kairos T-Band will not force consumers to choose between a watch they love and functionality they perhaps increasingly need. From the beginning, the Kairos T-Band will exist as a family of products and one that has a clear evolution path. At the most basic level, various sized metal connectors are provided given that wrist watches have a range of lug widths where the straps connect. Also, many timepieces have completely custom strap connectors that will not allow wearers to attach third party straps. 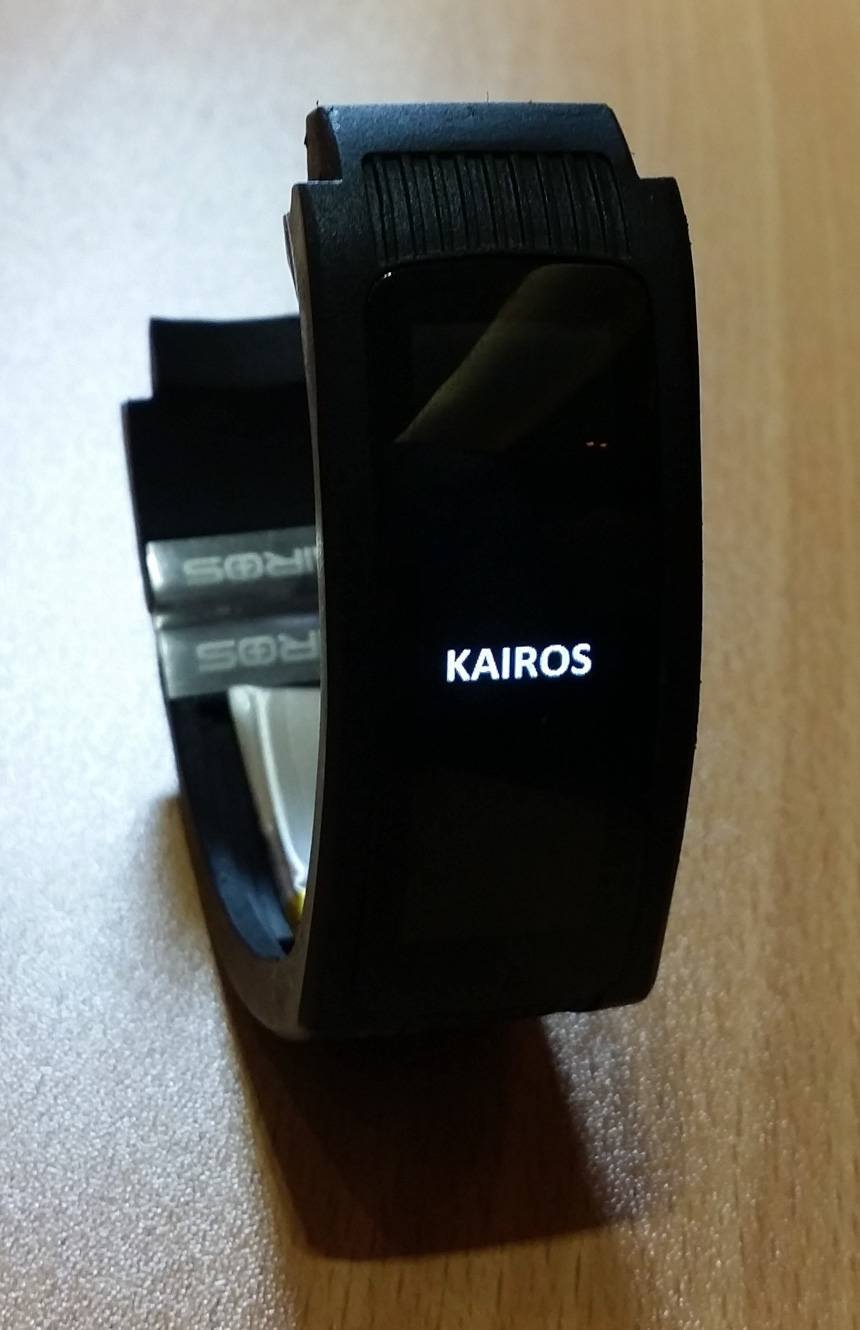 According to Kairos, the Kairos T-Band will be initially launched in three versions. The major differences include the types of displays and what functionality the user wants. All of the Kairos T-Bands will include the standard bevy of on-board sensors including an accelerometer and 3D motion detector as well as a heart rate and blood pressure sensor. The most basic model will be the Kairos T-band ND (for “No Display”). This simple model will merely track activity data and send it to a host smartphone device for those mostly interested in fitness and lifestyle tracking functions. Next is the Kairos T-band HD (for “hidden display”). This version will have a small display on the bottom of the strap so that it does not appear to people that your strap has a screen on it. Finally there will be the Kairos T-band OD. This model has a PMOLED curved touch screen that will exist on the inner part of the strap that faces the wearer. This will have a curved screen similar to that on the Samsung Gear S smartwatch.

For now, the Kairos T-band will have a proprietary operating system, currently without an official name. Kairos states the desire to include Android Wear into future Kairos T-Band products, but that for now, the power consumption needs of Android Wear is simply too high for satisfactory user performance. Nevertheless, the Kairos T-Band is intended to be compatible with apps on both Apple iOS and Google Android-based devices. Kairos is even very proud of some special partnerships they have with companies such as Misfit as well as Microsoft, who are both strong development partners. 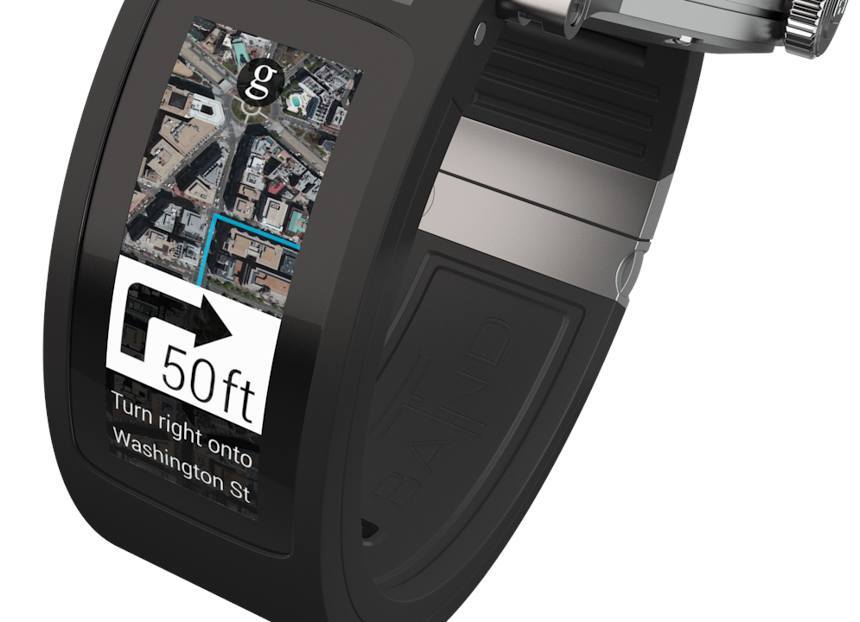 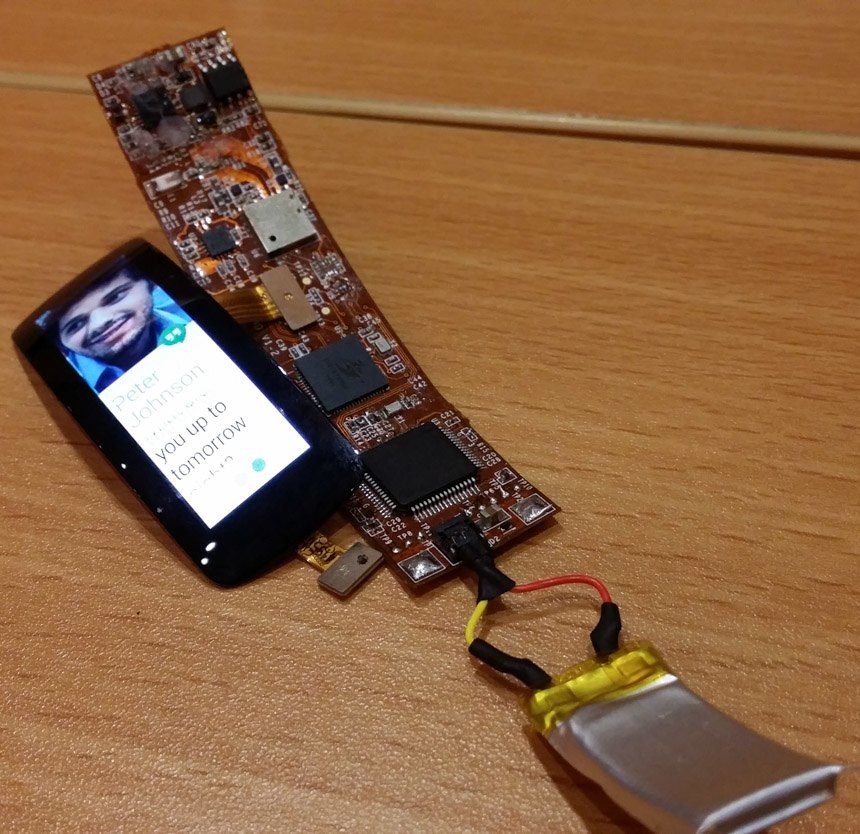 According to Kairos, the T-band will have a battery that will deliver somewhere between 190 and 250mAh of power. This is said to power the device from between 3 to 10 days – which is rather impressive. More interesting is an accessory that might go with the T-band that many watch lovers will find appealing. Kairos teased a new hybrid watch winder and charger for their hybrid smartwatches. The device is meant to rotate a watch so that the automatic mechanical movement can wind while at the same time charging the battery. If this special winder is made for the T-band, then users can wind their automatic watches while charging the T-band – which again would be another clever move from their engineers.

Even the materials used to produce the exterior of the Kairos T-Band are flexible. According to Kairos, the T-band can be made from rubber, silicone, or even various types of leather. This means customers will not only have some interesting options, but will best be able to match them to an intended timepiece when it comes to style. This is something really important when it comes to the appeal of a timepiece, whether it is smart or traditional. 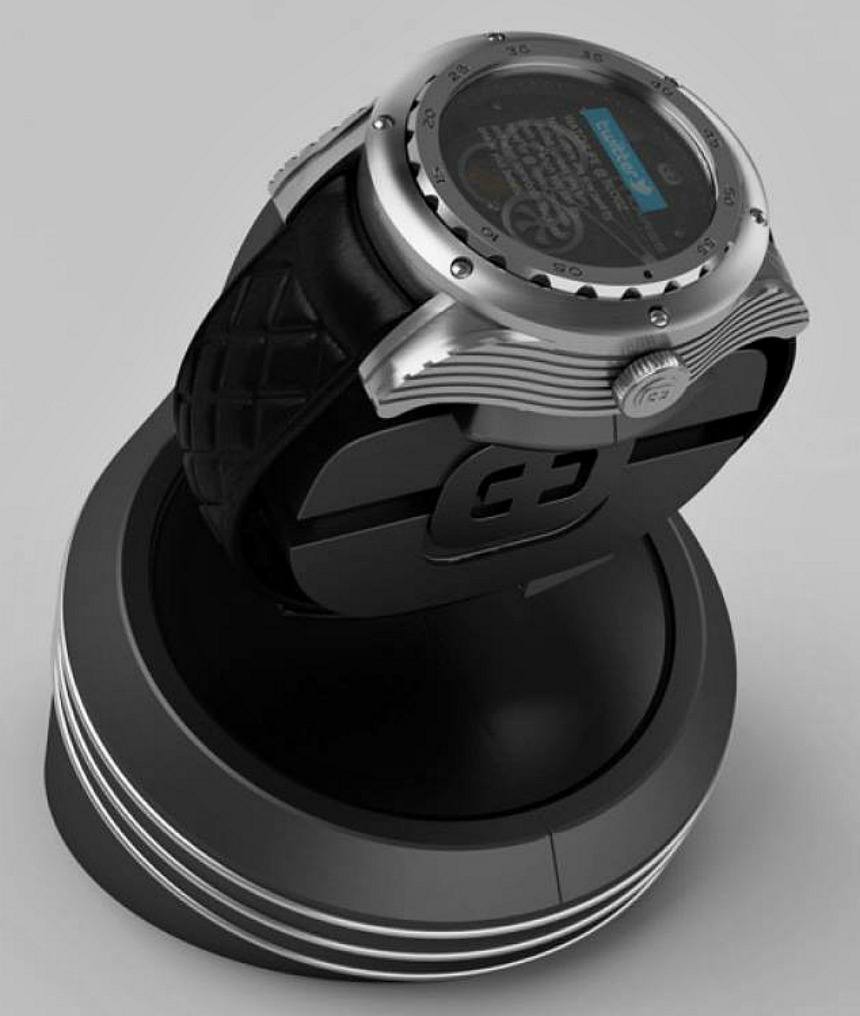 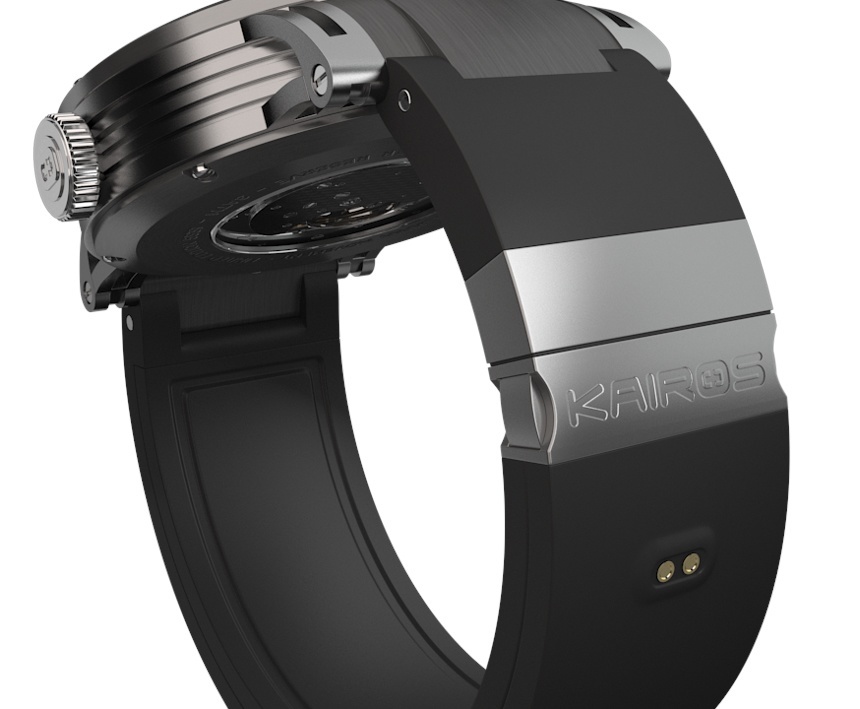 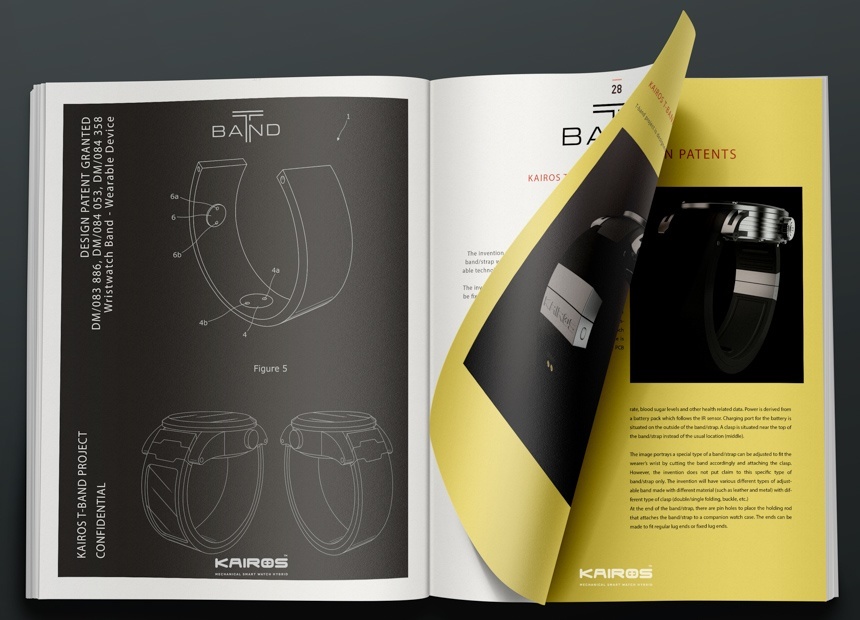 Note that all of the images of the Kairos T-band are shown with the company’s MSW 115 or SSW 158 Hybrid Mechanical Smartwatches, but the Kairos T-Band will presumably sold without a case, given that it is meant to connect to a timepiece the customer already has. As you can see, the strap claps is in a unique position so as not to interfere with the internal hardware. It also means that the strap needs to be cut to size for each wearer – which seems like a minor drawback.

One interesting point to discuss is that Kairos actually wants to work with traditional watch brands and see how they can offer versions of their products with traditional mechanical watches. Kairos feels that brands such as TAG Heuer (who have exclaimed interest in smartwatches) might be wise to offer beautiful traditional timepieces attached to a Kairos T-Band strap. Of course, the big question is when the Kairos T-band will be available and how much it will cost. I want to remind you that the Kairos T-Band will be a quickly evolving product, especially with the amount of interest I am sure it will garner. In many ways, it is the type of transitional product (or simply “compromise product”) that traditional watch lovers need in order to enjoy the allure of a smartwatch, while still wearing the timepieces they love. Kairos will launch a crowd-funding campaign on Indiegogo on November 17th, 2014. Kairos claims that their first campaign (for the watches) netted them $1.3 million, and that they have already raised another million dollars in series A funding after that. For the Kairos T-Band they claim to have plans for raising another $10 million in investment funding after the crowd-funding campaign is completed. Prices for the Kairos T-band smart strap will start at $149 for the pre-order and $249 after that. kairostband.com