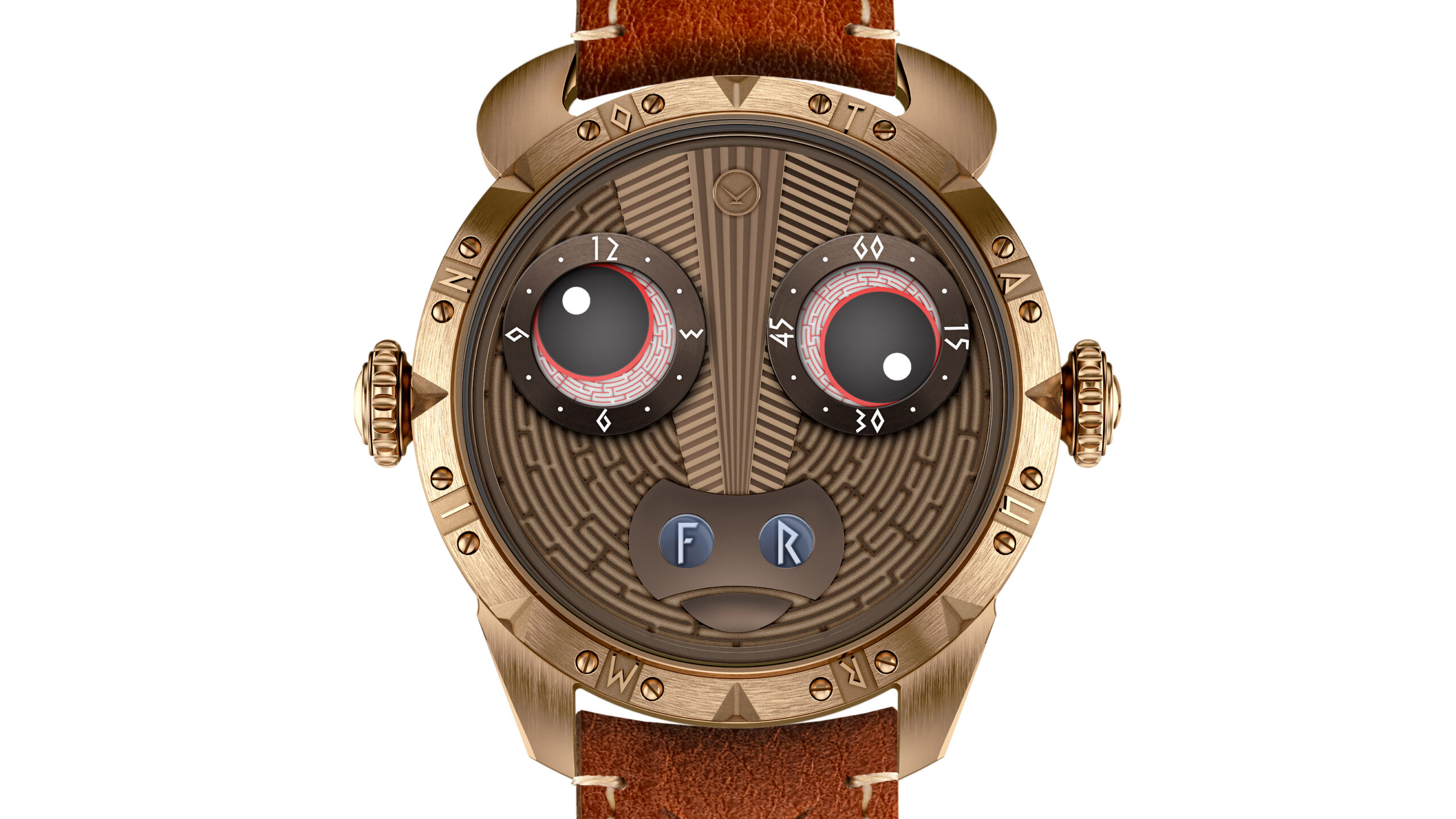 With China becoming one of the world’s most important luxury market over the past several years, watch brands have increasingly turned to designs tailored to the Chinese market or referencing Chinese culture. Perhaps the largest category of these are watches commemorating Chinese New Year, with brands across the industry developing limited-edition variants referencing the animals of the Chinese zodiac. Boutique haute horlogerie brand Konstantin Chaykin has been a prolific part of this trend since 2019, and as the Year of the Ox begins in 2021 the brand has turned its eye toward an unlikely inspiration on this Chinese holiday:  ancient Greece. The limited-edition Konstantin Chaykin Minotaur revamps the brand’s signature pareidolic “Wristmon” concept with a brand new complication and a mythical new theme centered around the legendary bull-headed monster of the Knossos labyrinth. 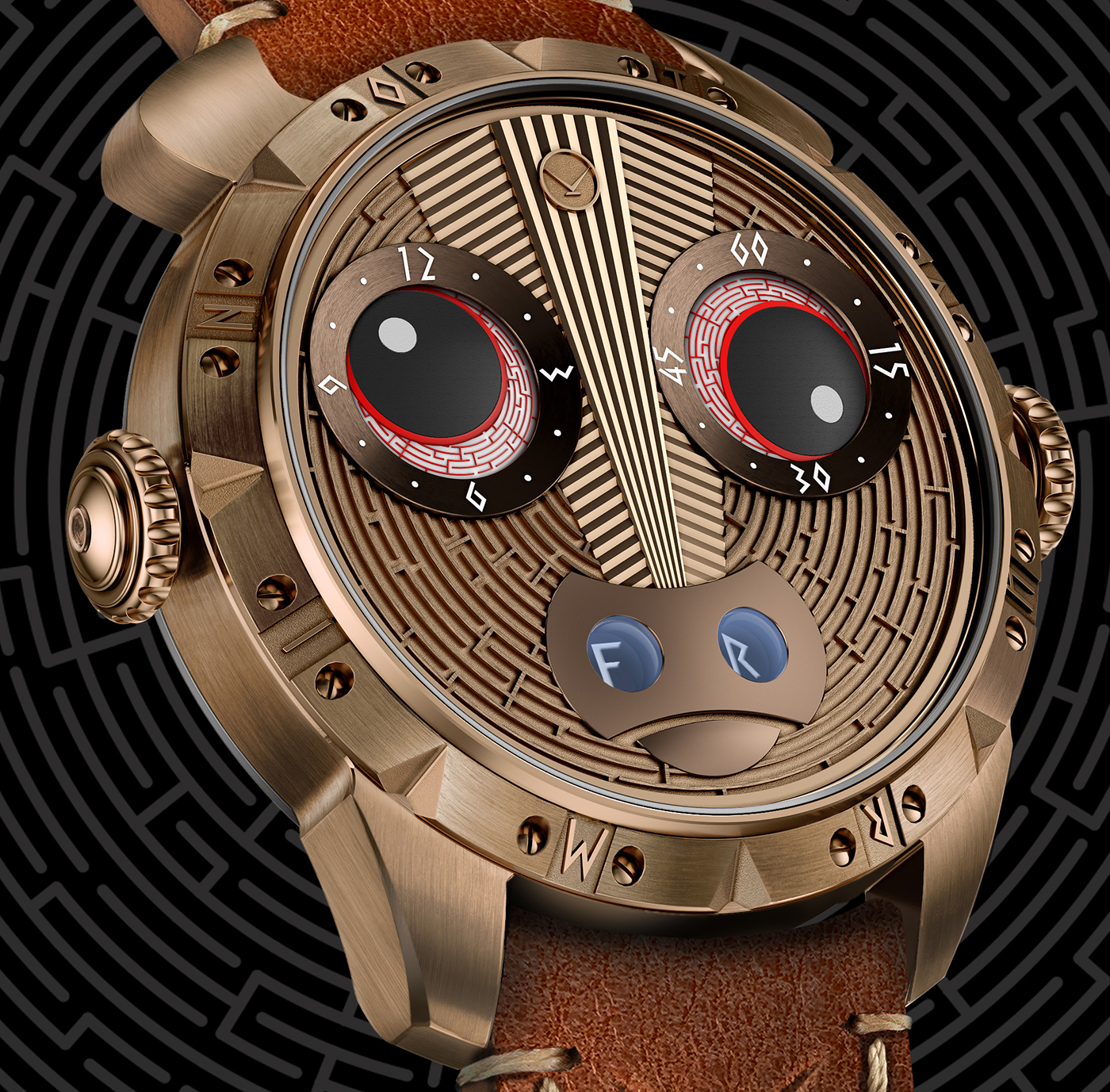 The 42mm case of the Konstantin Chaykin Minotaur shares much of its overall form with the rest of the brand’s offerings but makes some dramatic changes to better fit the mythological theme. The case material is an aggressively brushed iron bronze, adding a rugged ancient Greek flair to the distinctive dual crowns and unique bezel. The lugs at the 12 o’clock side of the case are flared outward with a pronounced curve, creating the horns of the mythical beast, while the bezel text (a hallmark of Konstantin Chaykin’s designs) spells out “Minotaur.” The font choice for the bezel as well as the dial may prove divisive, with an exaggerated angular “ancient Greek” typeface that calls to mind old Norse runes as much as anything from Athens. The caseback is titanium, preventing any contact between bronze patina and the wearer’s skin. 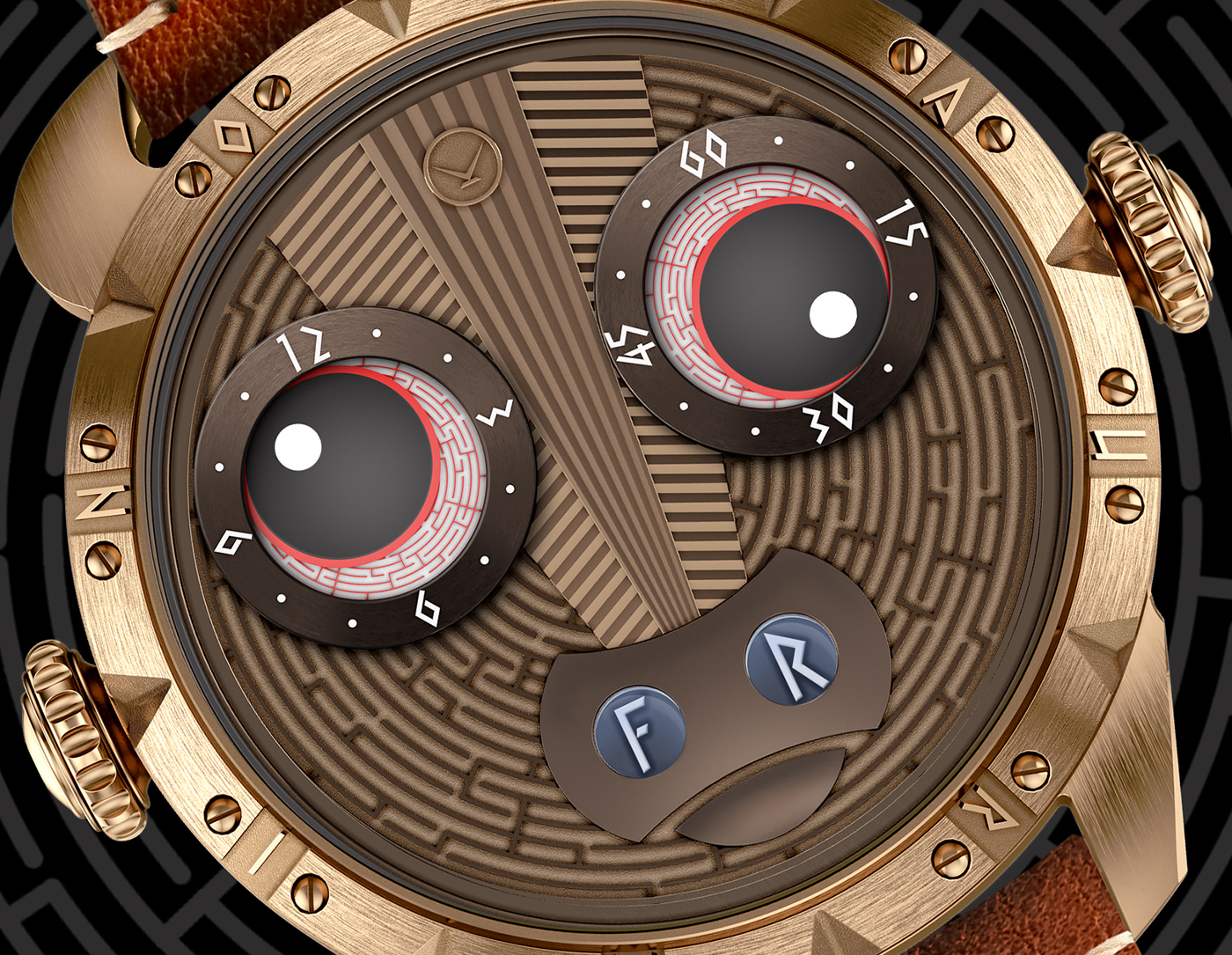 Like the rest of the Konstantin Chaykin “Wristmon” series, the dial of the Minotaur is the real visual centerpiece, creating a literal face with its own quirky personality. In this case, to create the bull face of the Minotaur, the base layer of the bronze tone dial is finished in a complex relief pattern evoking the labyrinth it stalked in legends. Two layers of striped guilloche form the central snout of the beast, culminating in a uniquely shaped raised nose and mouth section at 6 o’clock. The two nostrils serve as a two-part day display, spelling out the first two letters of the current weekday. Konstantin Chaykin claims the discs of this display are made of two different metals, one bronze and the other silver, but in initial images, both apertures appear in black. Both of these display windows are fitted with a sapphire magnifying lens, requiring precise grinding and polishing to prevent distortion. Hours and minutes are handled by the two eye-like subdials at 10 o’clock and 2 o’clock, respectively. While the stylized eyes acting as pointer discs appear bloodshot at first glance, on closer inspection the main dial’s labyrinth pattern is repeated in red for added detail. 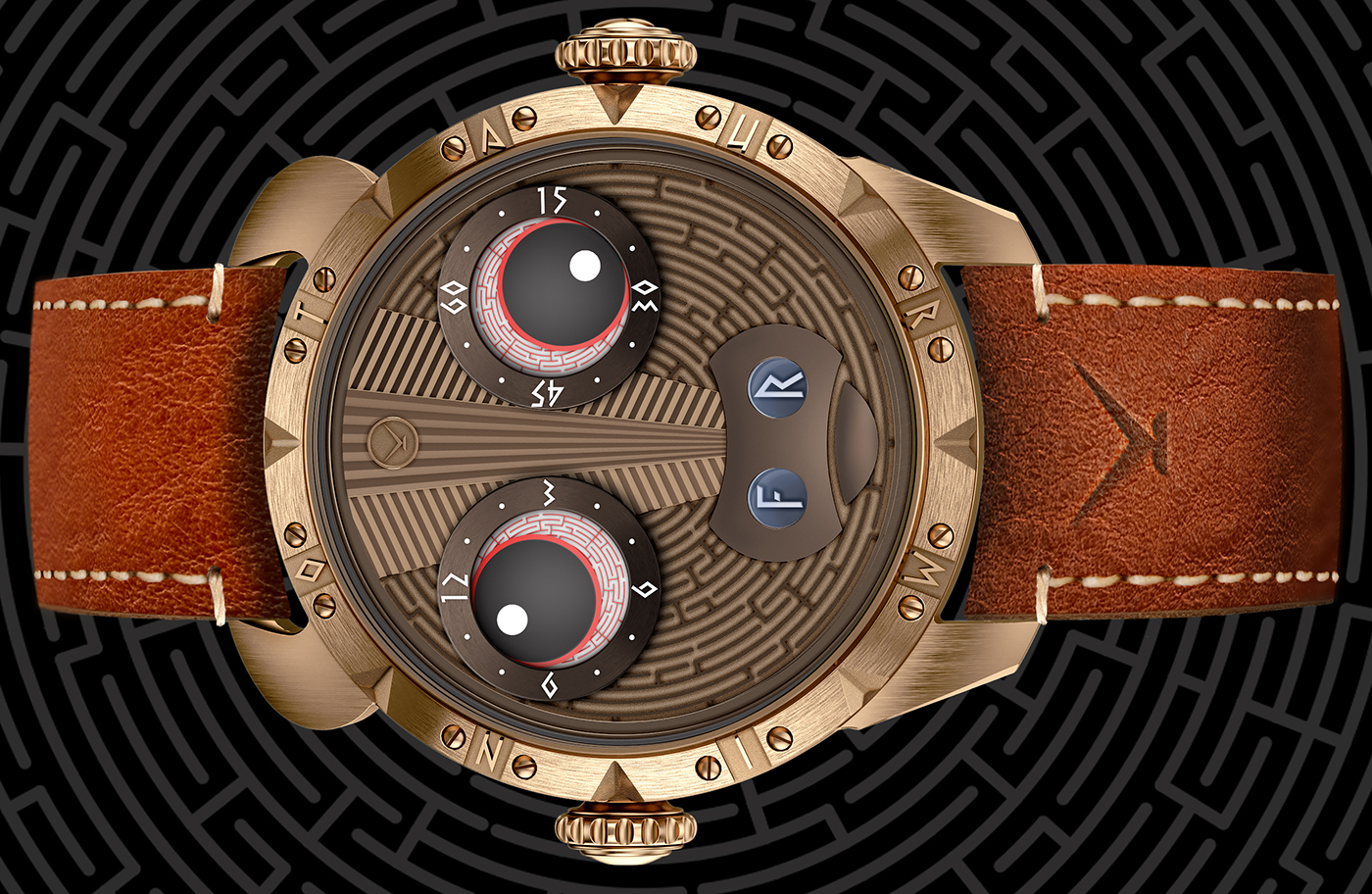 Konstantin Chaykin powers the Minotaur with the Vaucher based Caliber K.08-1 automatic movement. Redesigned from the ground up to accommodate the new dual aperture day display, the Caliber K.08-1 is a substantial evolution of movement concepts used in previous models in the series. Featuring an unusual pendulum clock style anchor escapement, the Caliber K.08-1 offers extensive hand finishing and a 50 hour power reserve at a 28,800 bph beat rate. The brand pairs the watch with a warm cognac brown strap in buffalo leather, accented with off white contrast stitching and a hand embossed logo personally applied by company founder Konstantin Chaykin himself. 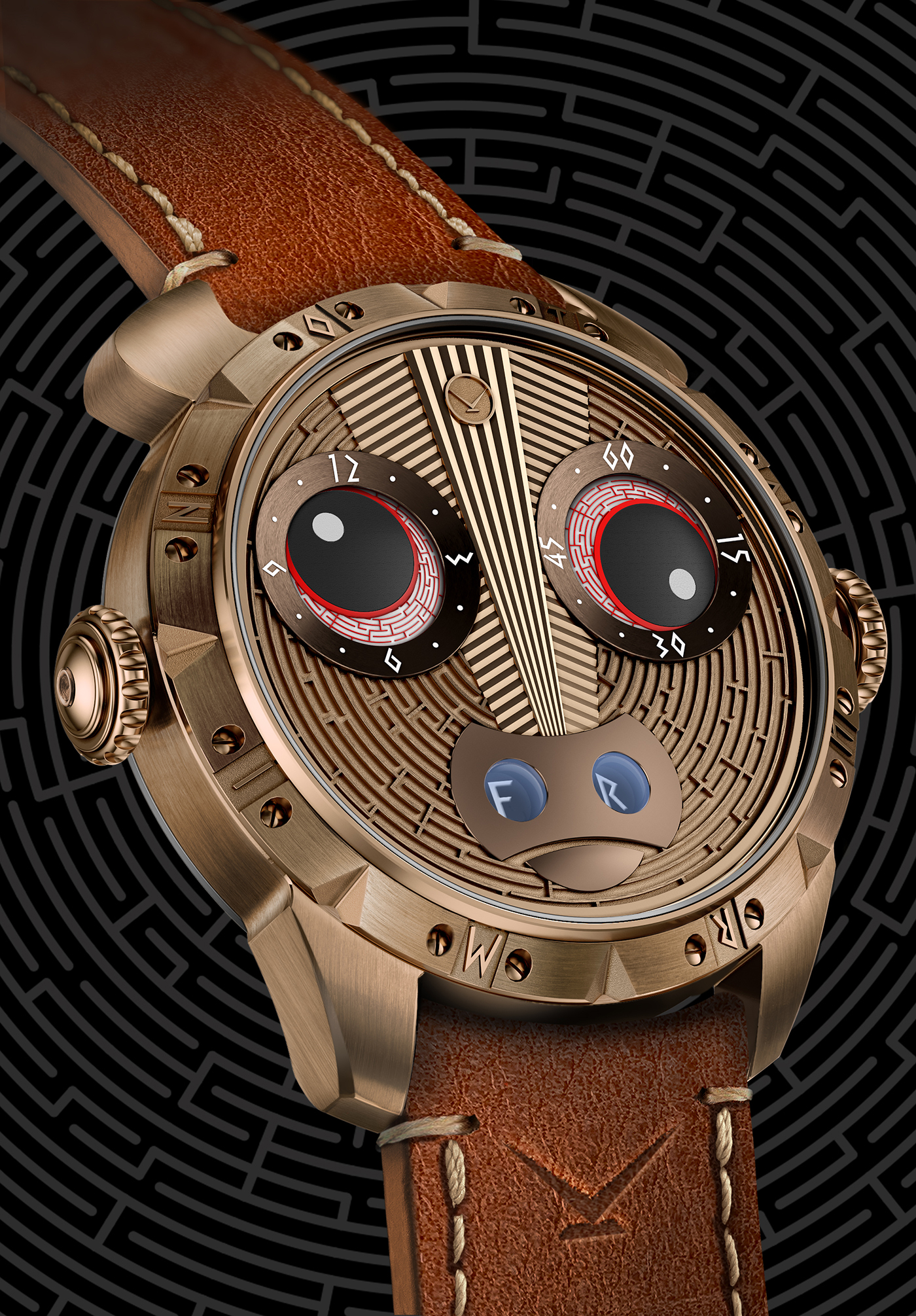