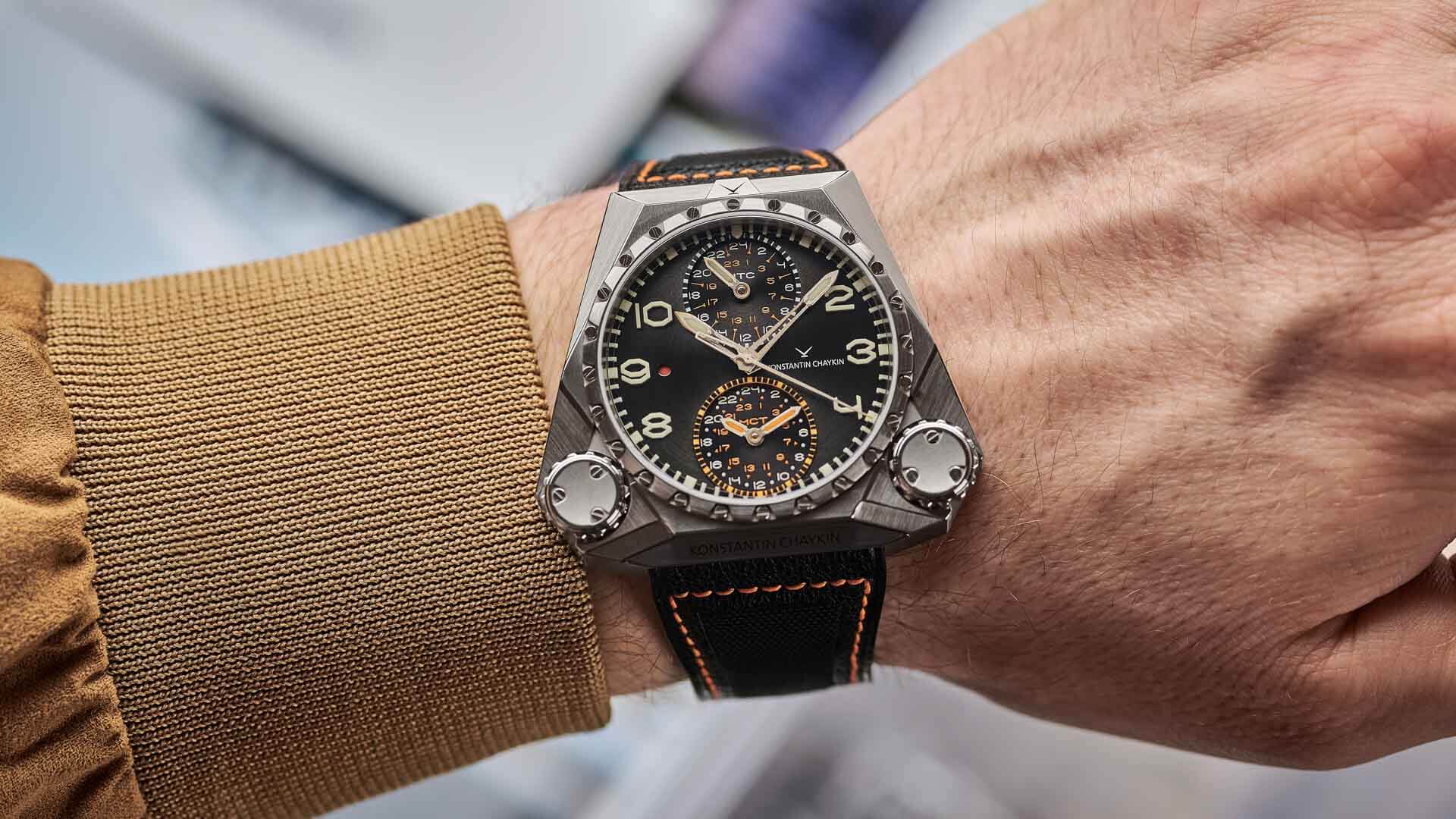 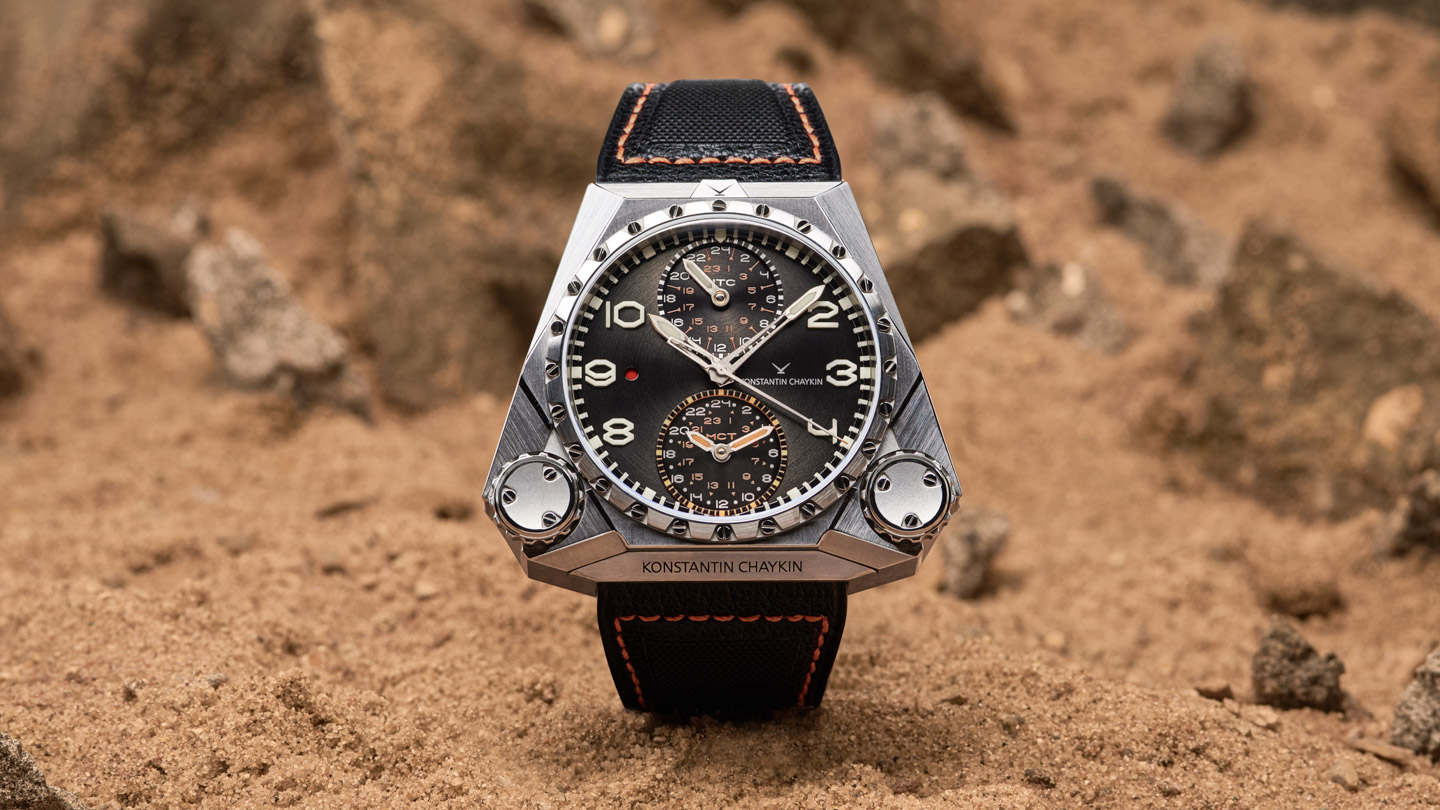 The Konstantin Chaykin Mars Conqueror Mk3 Fighter Project watch finally takes the eponymous project and turns it into a limited edition of eight finished timepieces we can actually see and, a select few of us, purchase. We debuted the Mars Conqueror concept in 2018 and covered it in greater detail here, but since that last occasion in 2019, numerous major changes have been implemented to the watch Chaykin now intends Mars Conquerors to wear.

If you haven’t already, I highly recommend you first read our report on my visit to Konstantin Chaykin’s watch manufacture in Moscow. In it, you’ll read about one of the most agile watch manufactures in the world and, more importantly, you’ll read what is probably the most detailed and honest profile on Mr. Chaykin himself. It is helpful when looking at any of his works to first acquaint yourself with their creator. 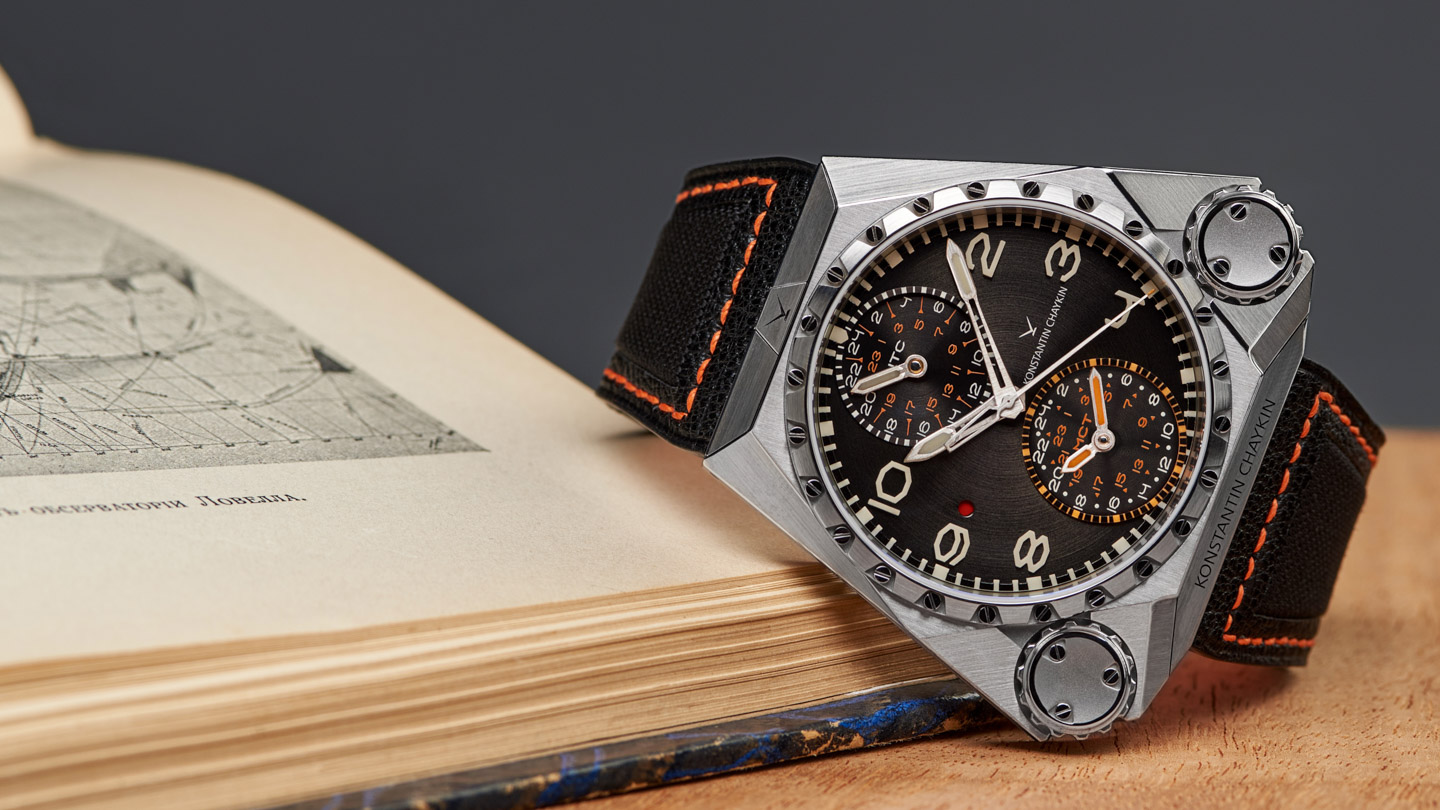 Once you’ve read that profile, you’ll know that this Moscow-based independent watchmaker has long shown a complete and utter disinterest in competing in the established haute horlogerie game. In place of endlessly re-created perpetual calendars and tourbillons, Chaykin has been finding inspiration for his latest creations in the greater world, whether it be the passing of time, the first motion picture, some extremely complicated calendar system, the Joker, Halloween, etc. The list just goes on, and that is a major part of what makes Chaykin one of the most highly appreciated independent watchmakers of our time. 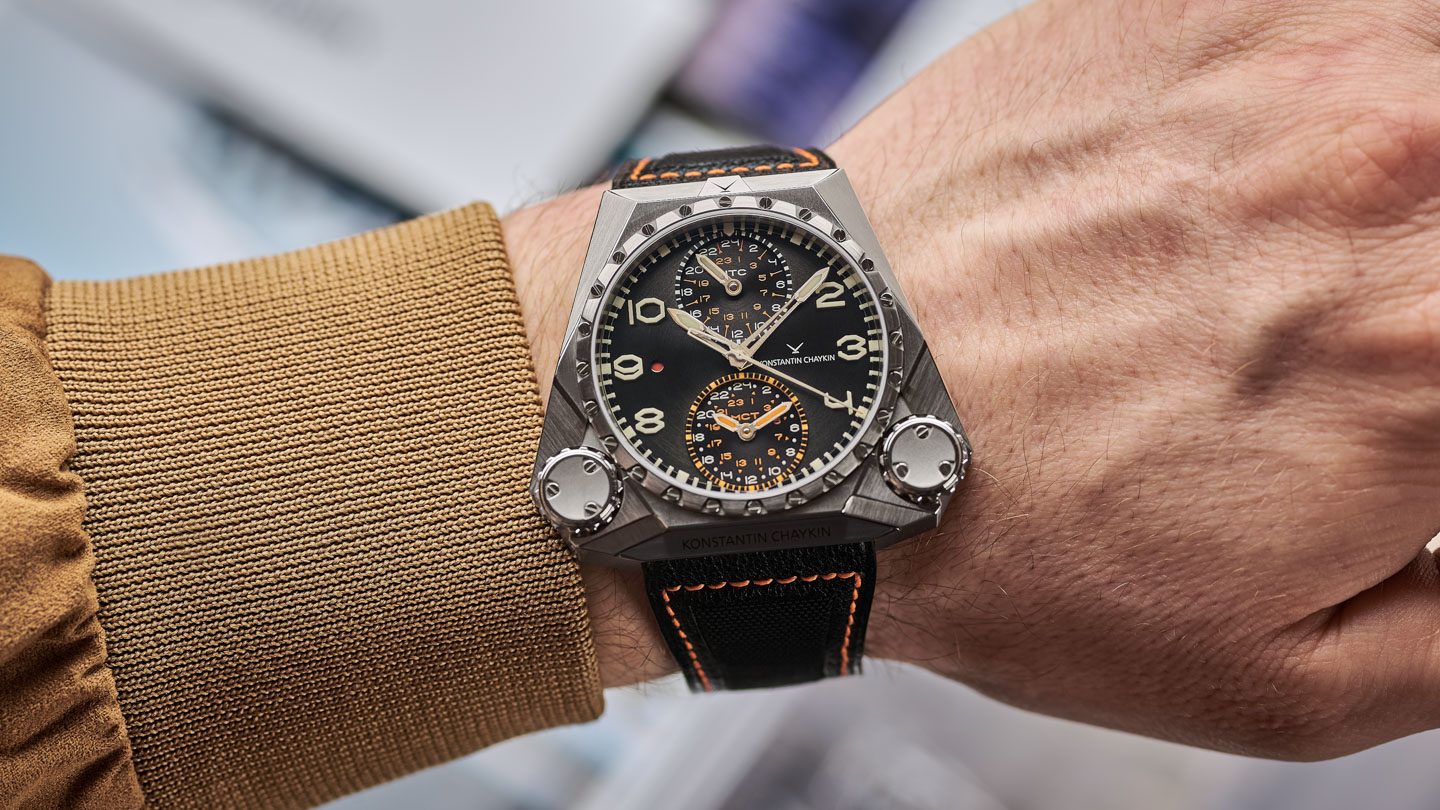 This time it’s humanity’s inevitable journey and the eventual colonization of Mars that’s served as his inspiration. Chaykin explains: “This will not be a nice outing or some kind of space tourism for the sake of a couple of cool-looking Instagram posts, even if we understand that we can do nothing today without social media. The conquest of Mars will not be easy, but it will involve an incredibly exciting process of creation and technological improvement in order to ensure the settlement of humanity in space. We are certain that the conquest of Mars necessitates the thinking over of many different aspects in advance, including the development of a specialized mechanical watch that is reliable and capable of functioning autonomously both in space and on Mars.” 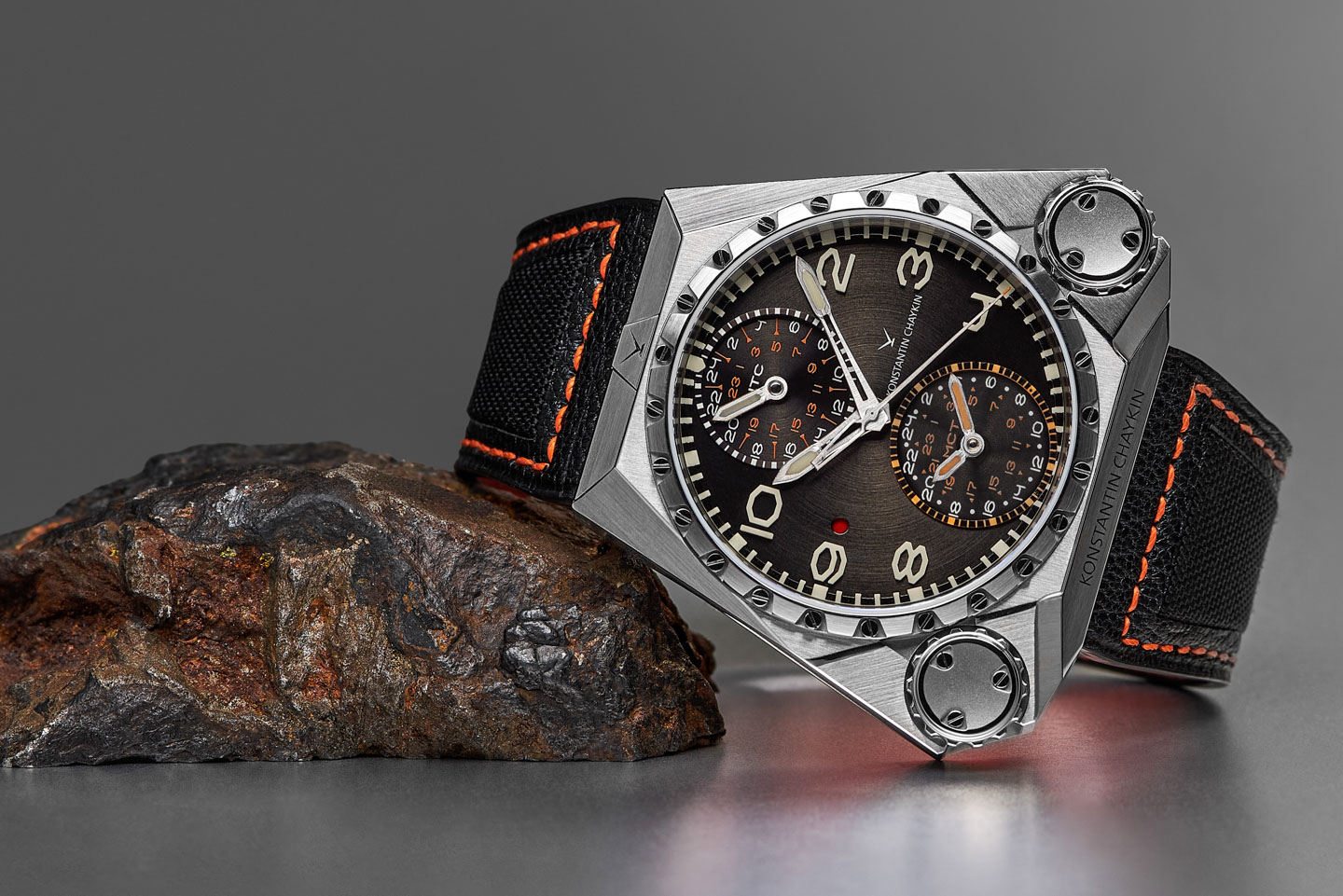 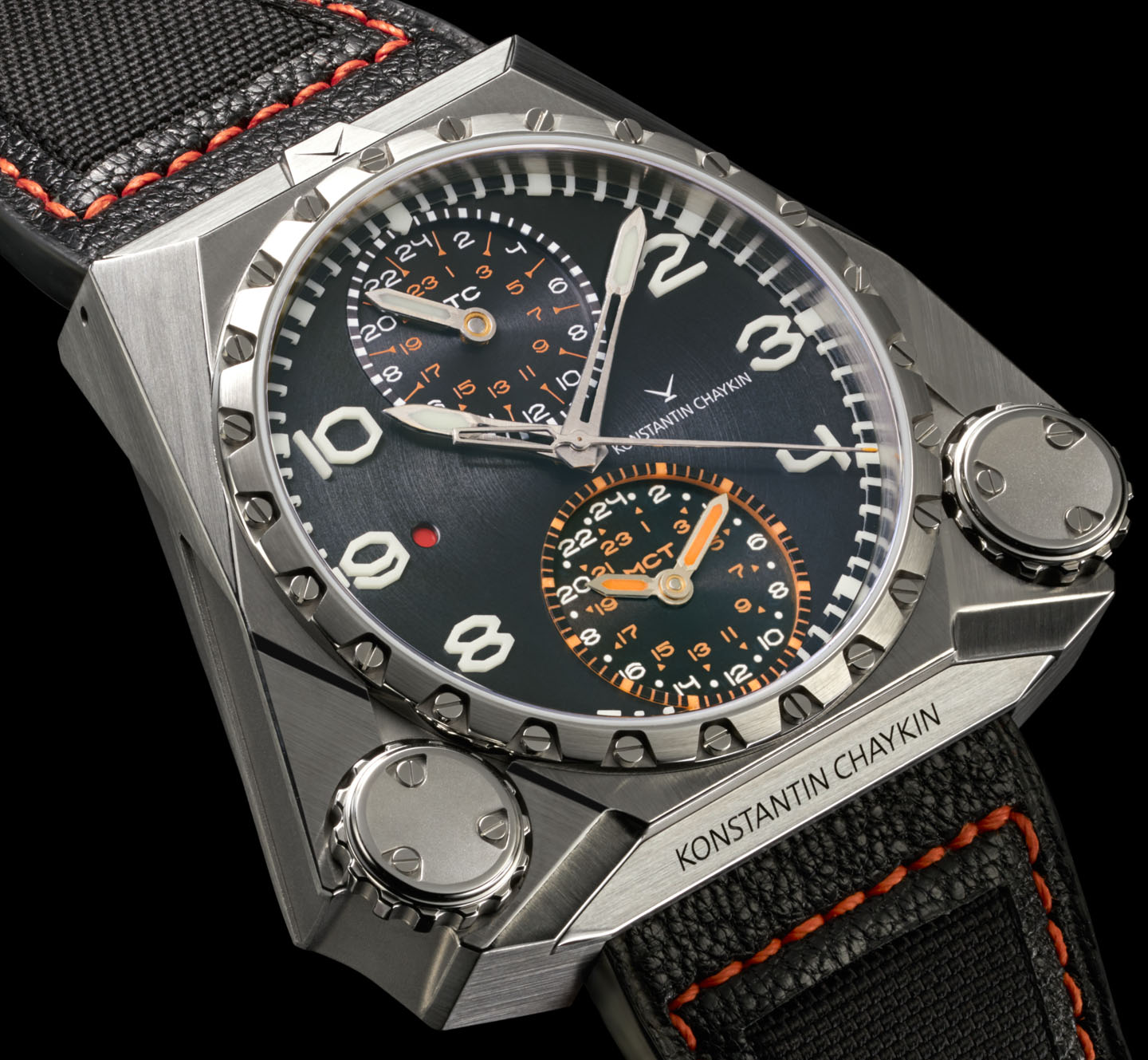 This extraterrestrial inspiration, purpose, and realization reminds me of George Daniels’ Space Traveller, as both watches, in a way, appear to be for people traveling away from planet Earth — all the while having to keep track of time both where they are going and back on their planet of origin. The Konstantin Chaykin Mars Conqueror Mk3 Fighter Project offers three indications: the main hands for local time, the UTC sub-dial at 12 o’clock for a second time zone, and the MCT, i.e., Mars time, as displayed on the 6 o’clock sub-dial. 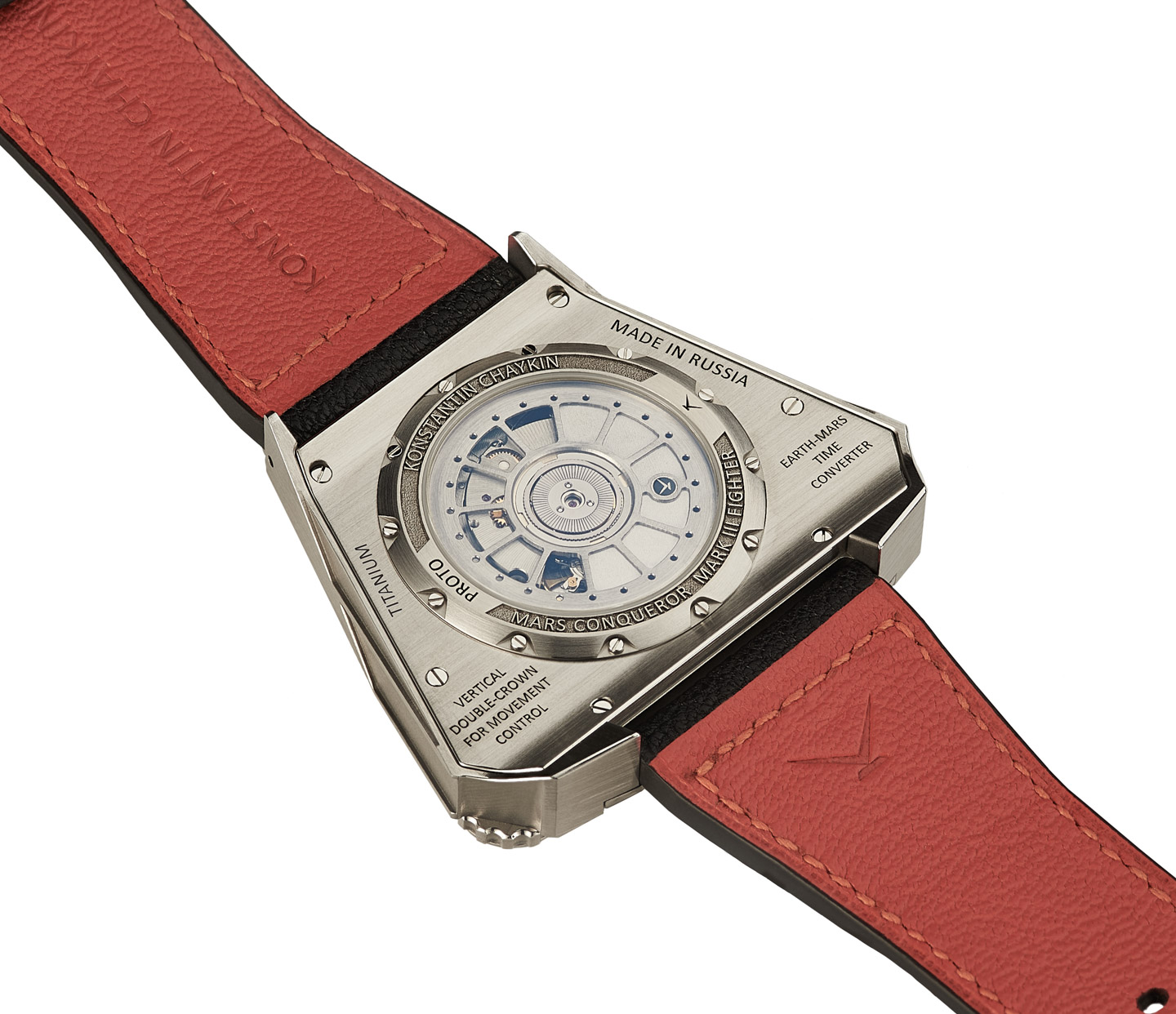 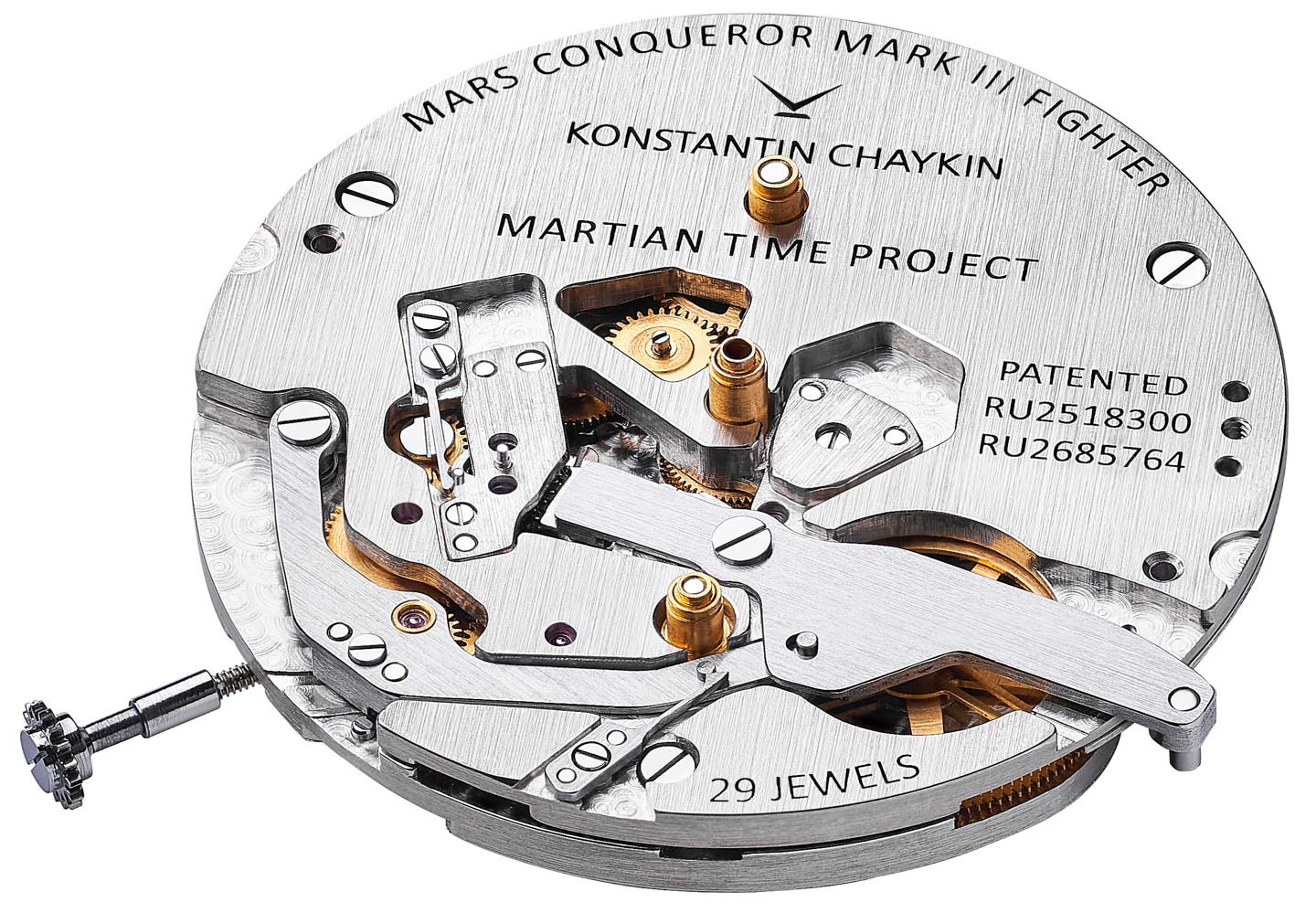 Responsible for all these is a combination of a 125-part module designed, manufactured, finished, and assembled entirely by the Konstantin Chaykin manufacture. Driving this module is a trusty ETA 2893-2, a slim yet powerful base caliber. The entire K.15-0 movement measures just 6.6mm-thick, with the module included, and offers 42 hours of power reserve, replenished through either the crown or the self-winding system. Speaking of crowns, as part of an invention of Konstantin Chaykin (just one of the 78 patented inventions of his career, patent number RU2518300), the Mars Conqueror watch uses two crowns: one for winding and adjusting the K.15-0 movement and the other to select between the functions of the former. 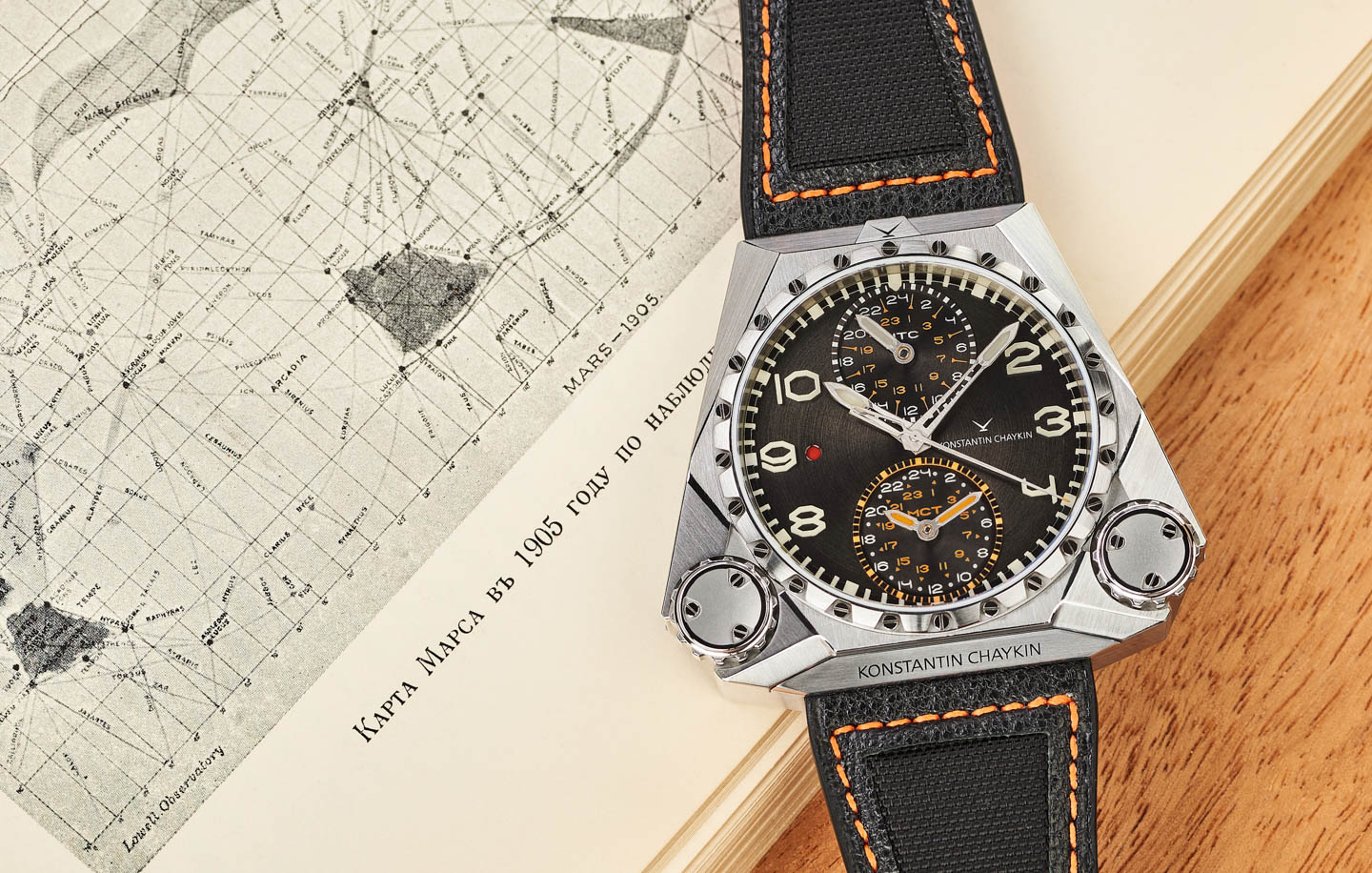 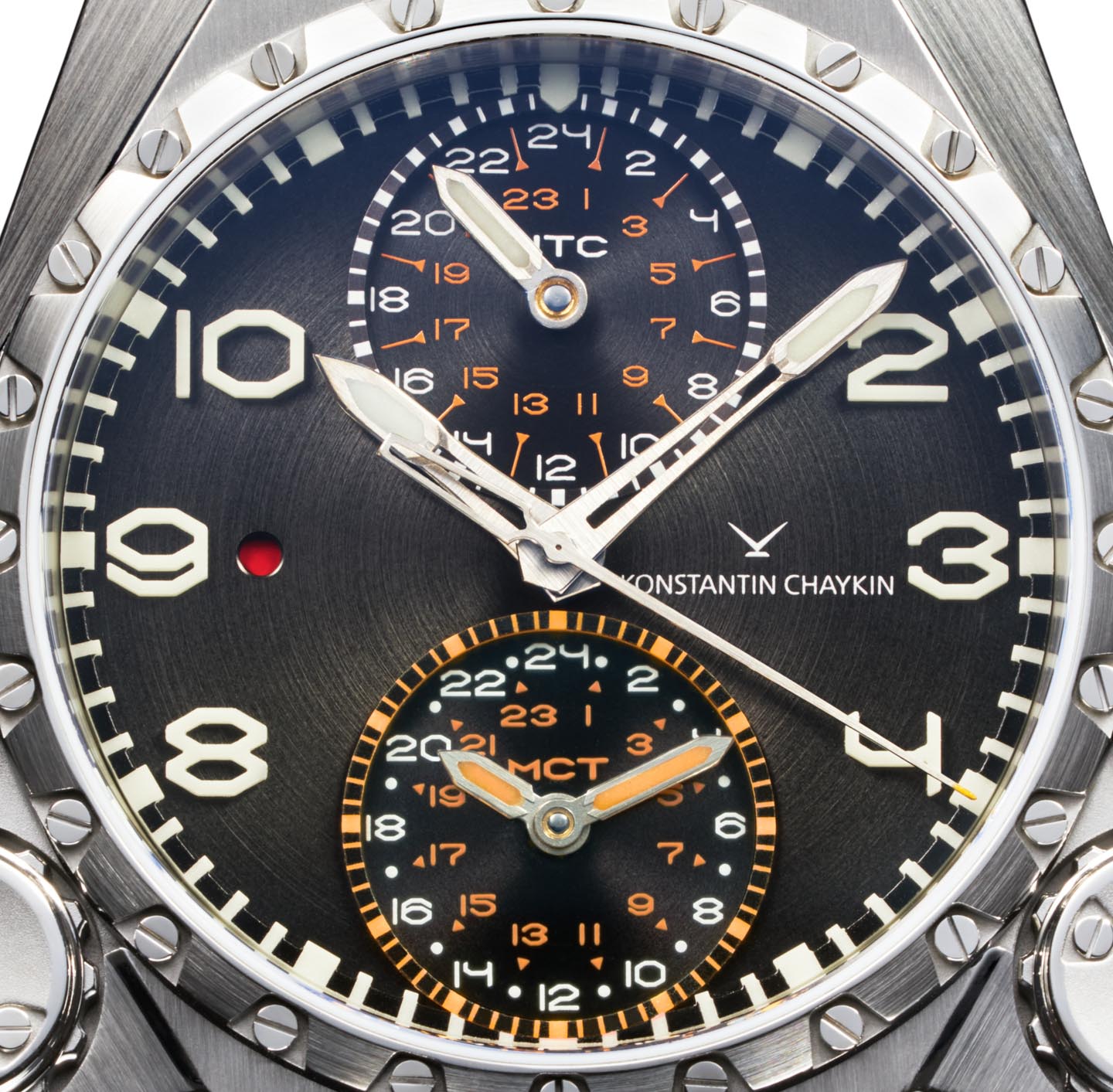 The average duration of the Martian solar day (called “sol”) is approximately 24 hours, 39 minutes and 35.244 seconds, or 88775.244 seconds. The mean of Earth’s solar day is 24 hours or 86400.002 seconds. Based on calculations performed by Chaykin, it is possible to make the transition from the gear system of terrestrial time to the gear system of Mars time with the use of two wheels with 109 and 112 teeth. The 112/109 gear for Martian time indication is patented by Konstantin Chaykin. Thus, the duration of the Martian day with the use of this gear is 86400×112/109 = 88777.98 seconds, which is longer than the mean Martian solar day by just 2.7 seconds. That 2.7-second deviation should be considered precise, as it is less than the daily variation of a mechanical COSC chronometer, which is between -4 to +6 seconds a day. The 112/109 gear allows for the production of a technically correct synchronization of Mars and Earth time indications. 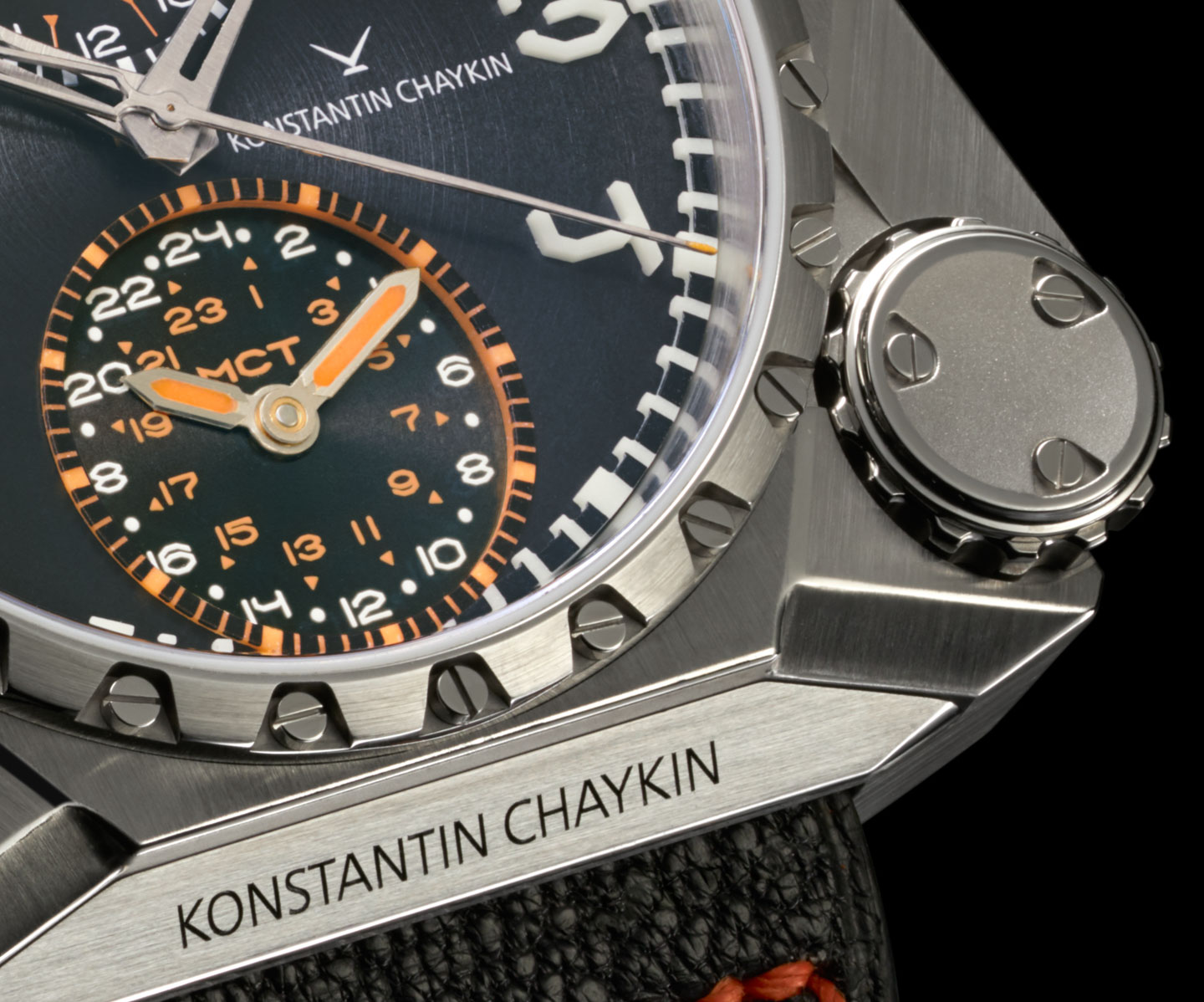 The dark brown dial of the Konstantin Chaykin Mars Conqueror Mk3 Fighter Project has its outside minute scale and applied indices crafted from the innovative monolithic luminophore, which start to glow in twilight and darkness. These have a three-dimensional shape, standing out as solid blocks of luminous material from the plane of the dial. The hands of the MCT Mars time display glow in orange, while the terrestrial time indication’s hands light up in blue-green. 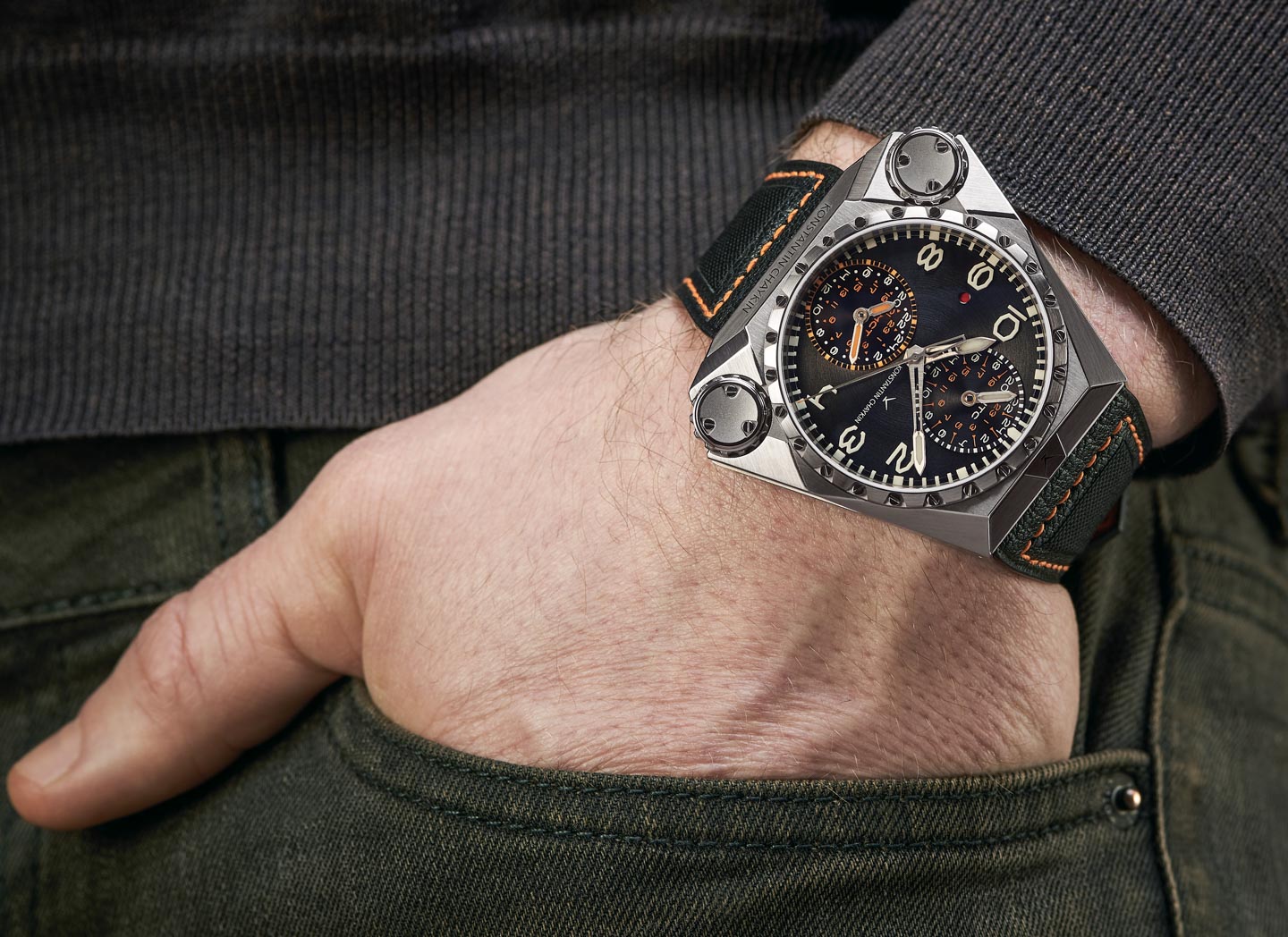 The case of the Mars Conqueror Mk3 watch is crafted from titanium, a space-age material that’s quite the fitting match to the theme. Measuring just 48mm lug-to-lug, it has the same “height” between the lower and upper edges of the wrist as a regular 40-42mm watch. The width of the trapezoidal case is 55.82mm, while the total thickness is 15.3mm. We have seen a wide range of luxury watchmakers use the excuse of a flamboyant theme — such as space travel — to create exorbitantly sized (and likewise exorbitantly priced) watches that were both immensely unwearable and unreasonably unaffordable. Judging from the wrist shots provided by the manufacture, the Mars Conqueror Mk3 won’t be the first dress watch of the orange planet, but it surely will be a wearable timepiece for us mortals here on Earth.

The case is one very complex-looking creation with the arch-nemesis of case decorators: many convergent edges and surfaces. Get one of these edges a bit wrong, and you must correct the other one — and so develops the vicious cycle that leads to a ruined case. The polishing and finishing of the Mars Conqueror’s case won’t be for the faint of heart. The strap is in black leather with a synthetic pad and orange lining, matched to an in-house-made titanium buckle. 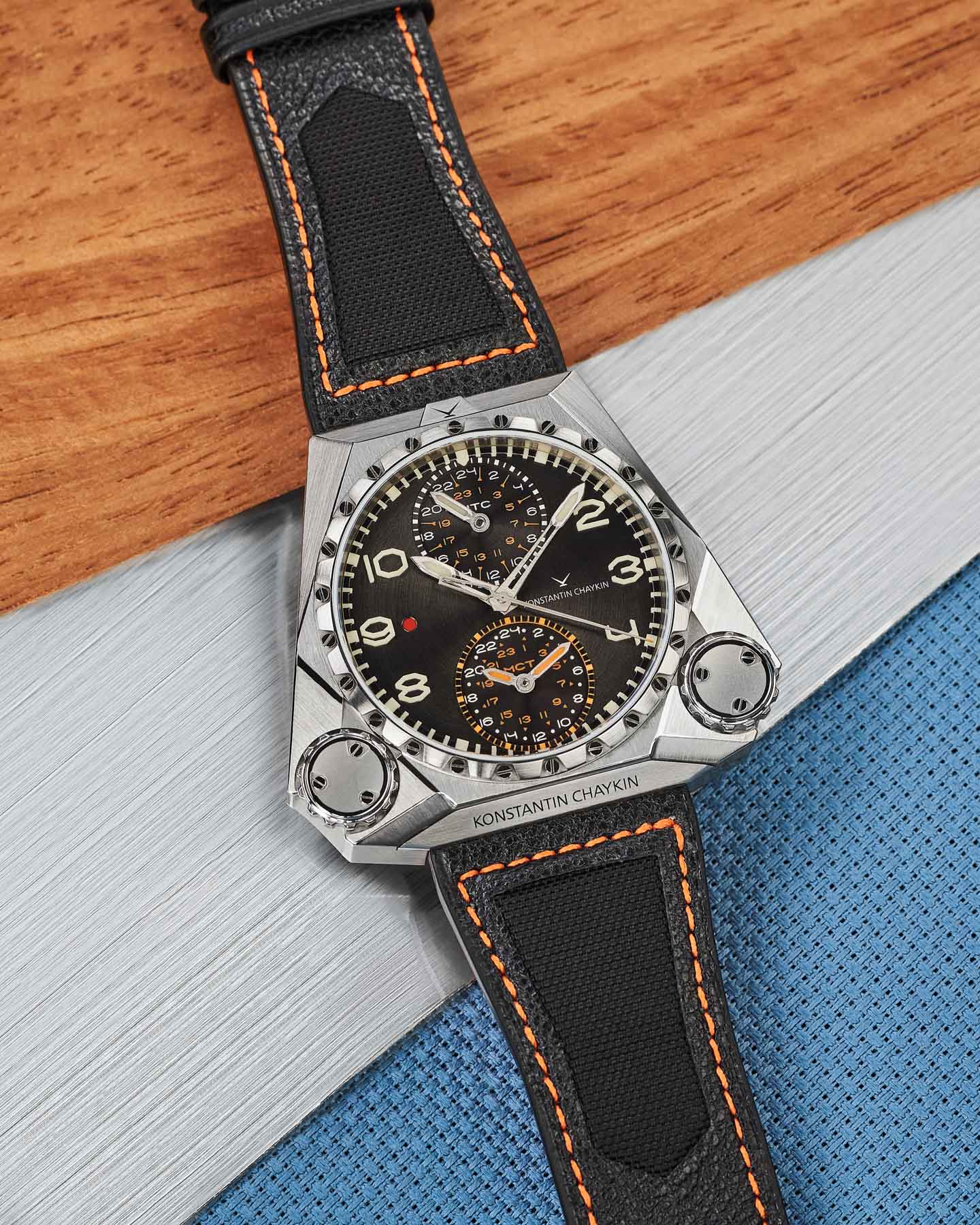 Price for the Konstantin Chaykin Mars Conqueror Mk3 Fighter Project will be 19,710 Euros and this first run in titanium will be limited to just eight pieces. Given the complexity of the design, the novelty factor of the theme and its realization, as well as the fully in-house-made case, dial, crown system, and module, this is one competitively priced package. You can learn more about Konstantin Chaykin and the Mars Conqueror watch on the manufacture’s website.