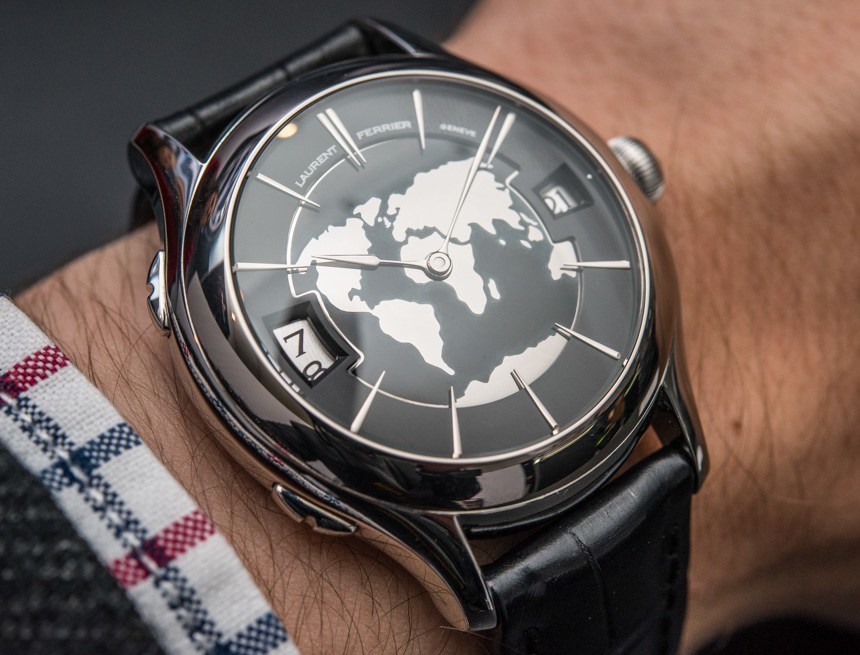 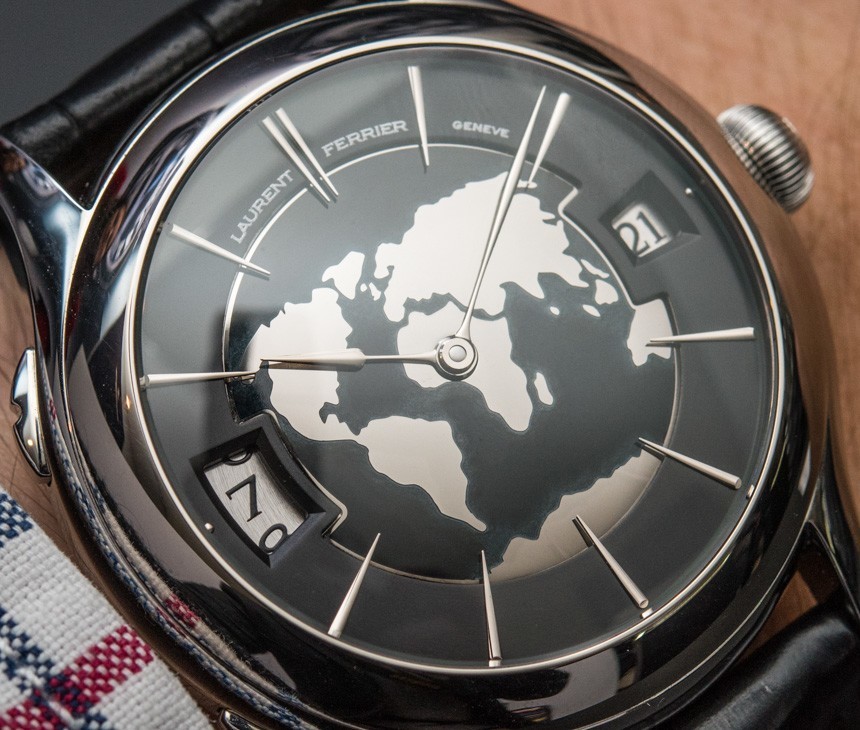 Laurent Ferrier has a lot of experience when it comes to creating a positive brand aesthetic, and working with that to create a visually homogeneous range of stand-alone pieces. A former Patek Philippe watchmaker, the very much introverted Ferrier has made a name for himself thanks to his exquisitely finished movements – like the one in his Galet Classic Double Balance Spring Tourbillon – as well his instantly recognizable, and yet balanced and restrained brand aesthetic. With that said, we went hands-on with what we found to be one of their most eye-catching pieces yet, the new Laurent Ferrier Galet Traveller Globe Night Blue watch, with some fascinating details to appreciate. 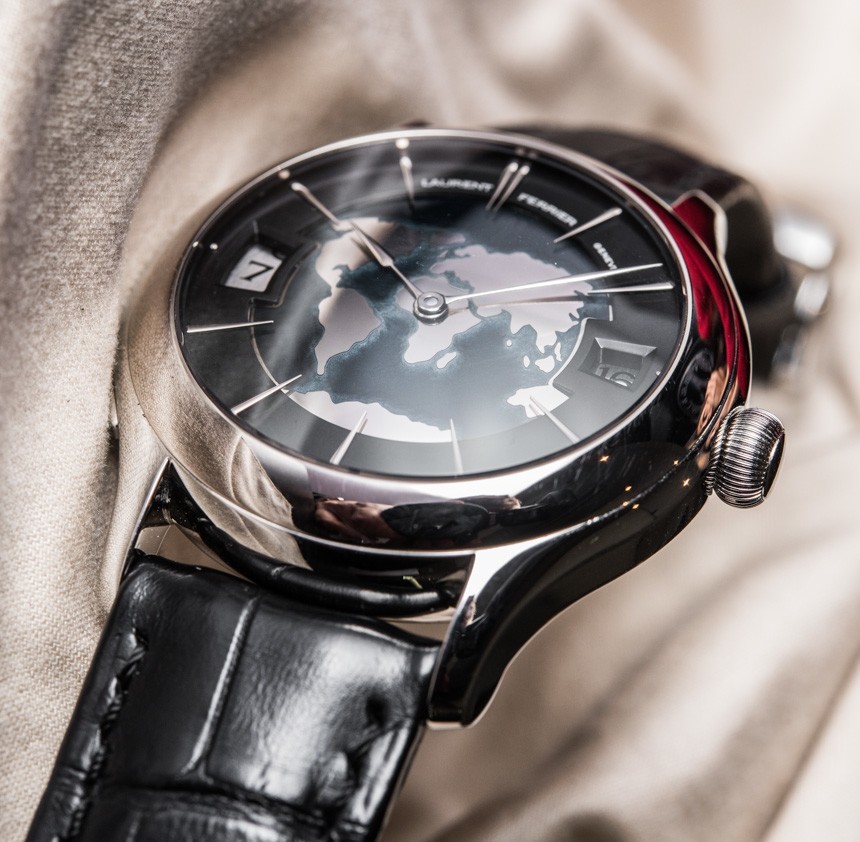 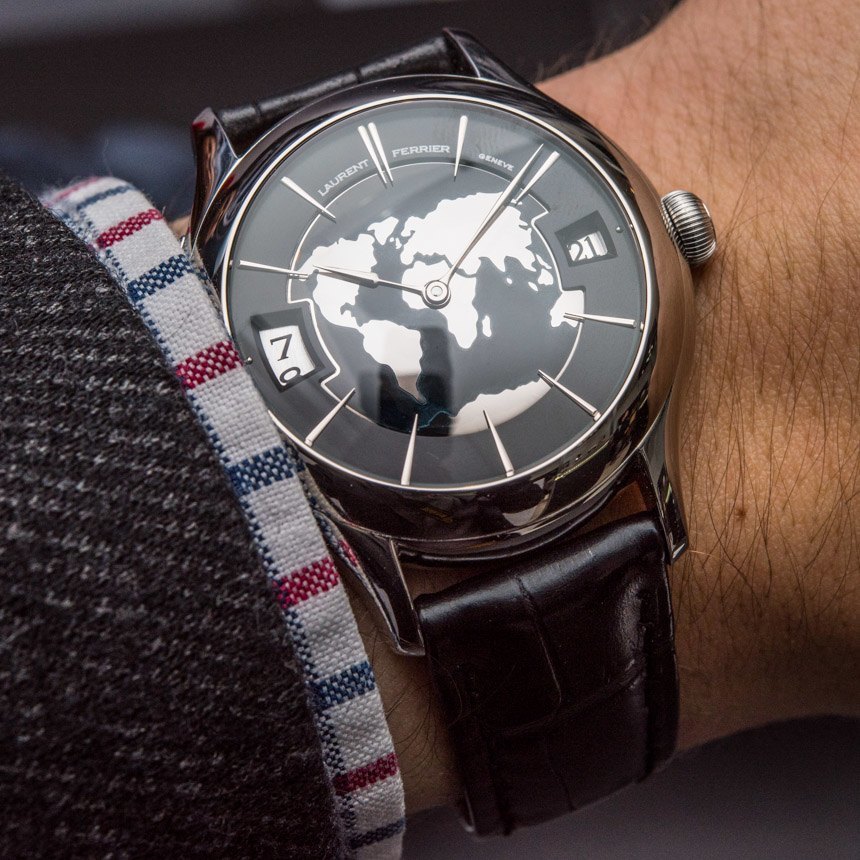 You see, the early version of the Galet Traveller featured a beautiful movement and operated admirably, but it was arguably not as arresting as the Laurent Ferrier Galet Traveller Globe watch. This evolution – which goes beyond the mere addition of a globe to the dial – goes well with what we could possibly identify as some of the key watchmaker values: a pursuit of pushing the limits, if not technically, then aesthetically – although the former is hardly ever possible without the latter. In an interview we recently conducted here on aBlogtoWatch with Laurent Ferrier himself, you can tell that he believes in his products, that they are created with love and skill, and not only a myopic focus on the bottom line. There is a search for the mastery of mechanical methods as well as a playfulness of design in his pieces. 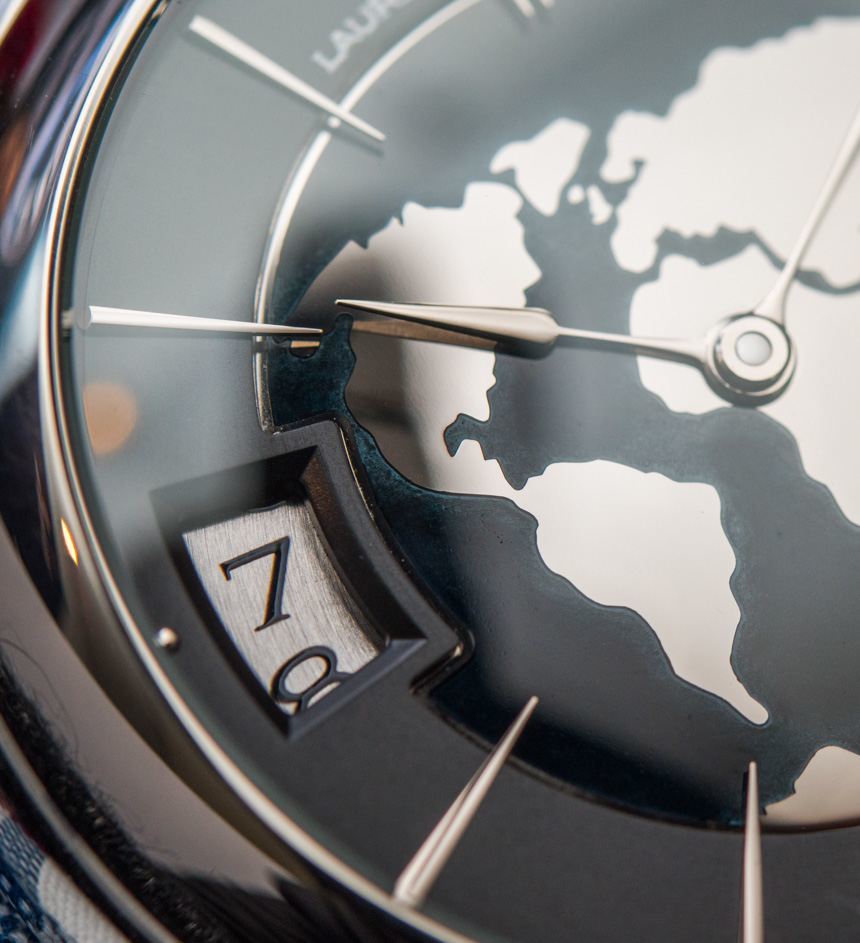 I am sure many would agree that the original white gold and rose gold variants of the Galet Traveller watch were technically comparable to this latest iteration, but where they lagged behind is in providing some extra eye-candy for the viewer. As the term “Globe” in the name of the new Laurent Ferrier Galet Traveller Globe Night Blue already implies, this piece features a striking enamelled dial depicting a map of the world – and in my opinion, it is entirely better for it. Debuted in 2015, we originally saw this piece at SalonQP 2015 – where, despite the watch’s highly polished elements and non-AR coated crystal, we tried our best to capture its many intricate and fascinating details. 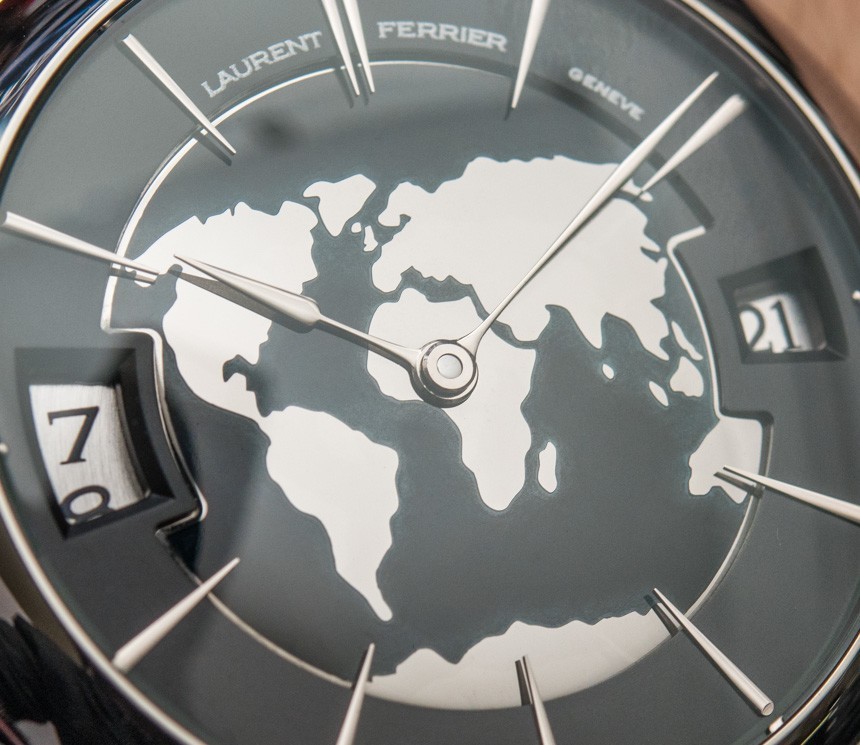 Hence, it is the dial that stands out as the centerpiece of this watch: the central design is rendered in raised areas of highly polished 18 karat white gold, surrounded by blue enamel here on the Night Blue model. While in other iterations, we can expect to see other colors of enamel to be used, here, on the Laurent Ferrier Galet Traveller Globe Night Blue, the oceans are covered in an amazing-looking translucent blue enamel, that goes brighter towards the continents, and almost pitch black for the undulations of the seabed. 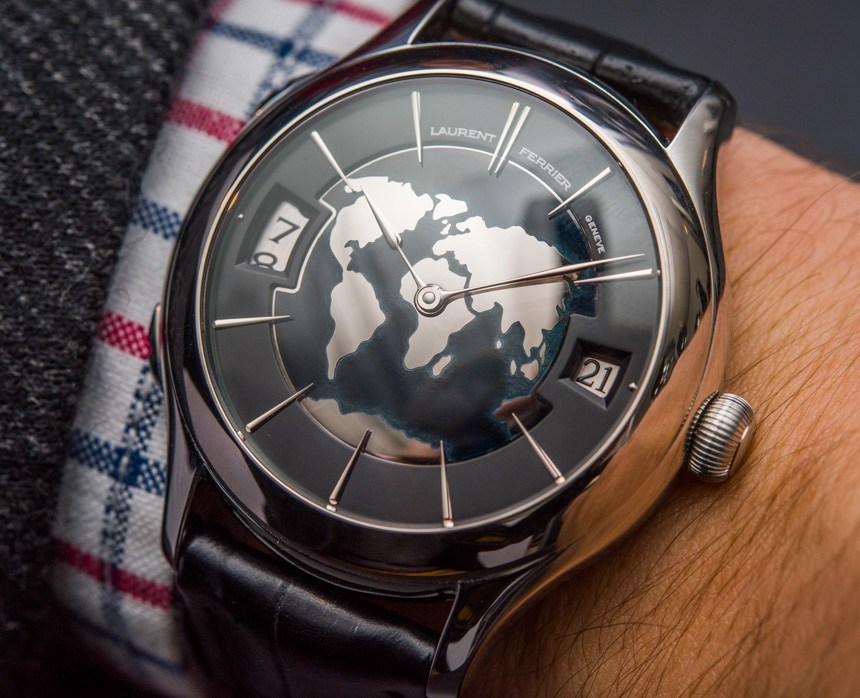 The white gold continents are done so masterfully that they appear to be standing out from the oceans of the world – it is not just a flat picture with some painting on it, but a fantastic-looking (albeit geographically not terribly accurate) three-dimensional rendering of this football we call the Earth. 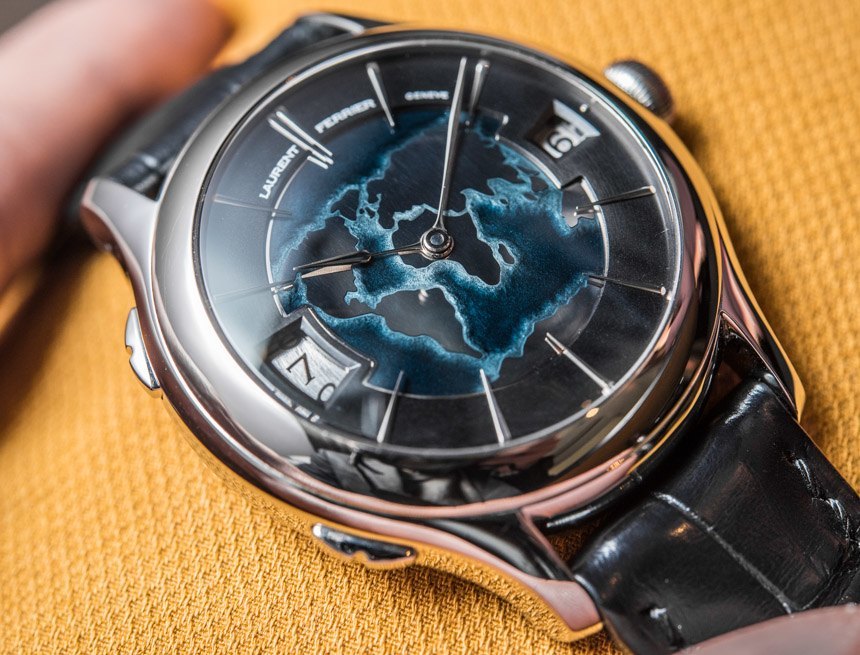 The style of enamelling on display is known as champlevé, which literally means “raised fields.” This is when a solid disc of material (white gold, in this instance), has compartments cut into it to hold vitreous or fluid enamel. Once enamel (in a liquid form) has been applied, it is heated to very high temperatures, somewhere around 1,000 degrees Celsius in an oven. It is similar to cloisonné enamel, but the walls are often much thicker and the design usually less intricate. I think it works really well with bold designs where colour is more important than detail. 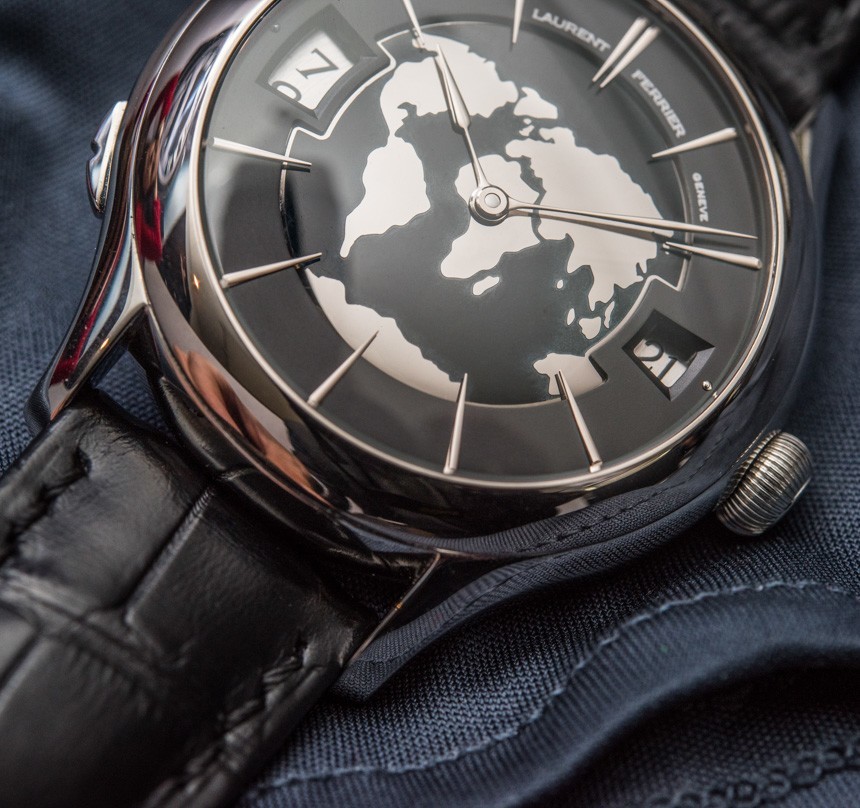 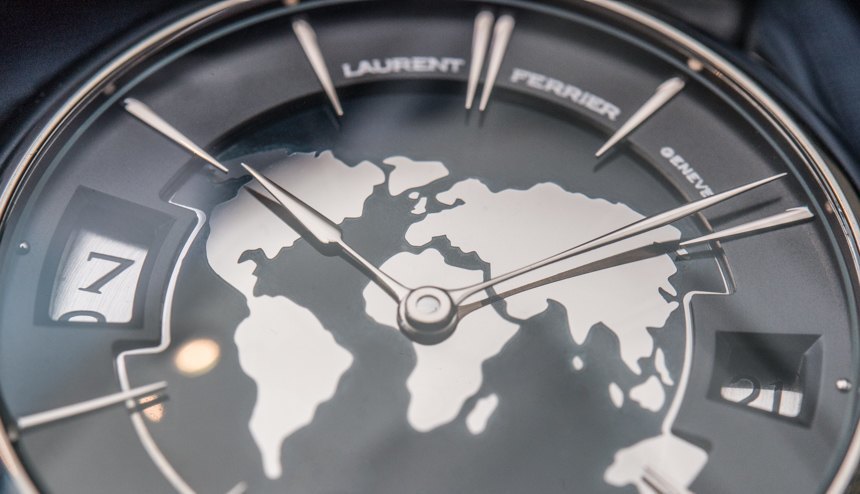 The globe map is slightly domed to give the appearance of a sphere within the watch and it is surrounded by a circular, satin-brushed, sloping rim. The hours are indicated by droplet-shaped pointers in white gold, and these are not only fixed to an encircling chapter ring in black, but actually extend over its edge and above the globe. This gives the applied indices an even more perceptible depth and three-dimensional look, and lets you appreciate how the domed globe is almost reaching the tips of the indices. 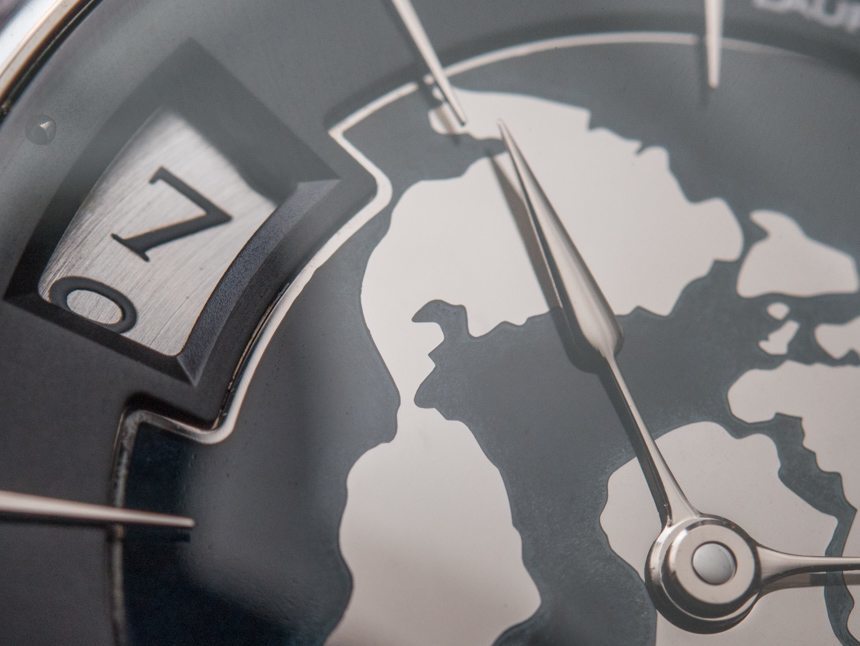 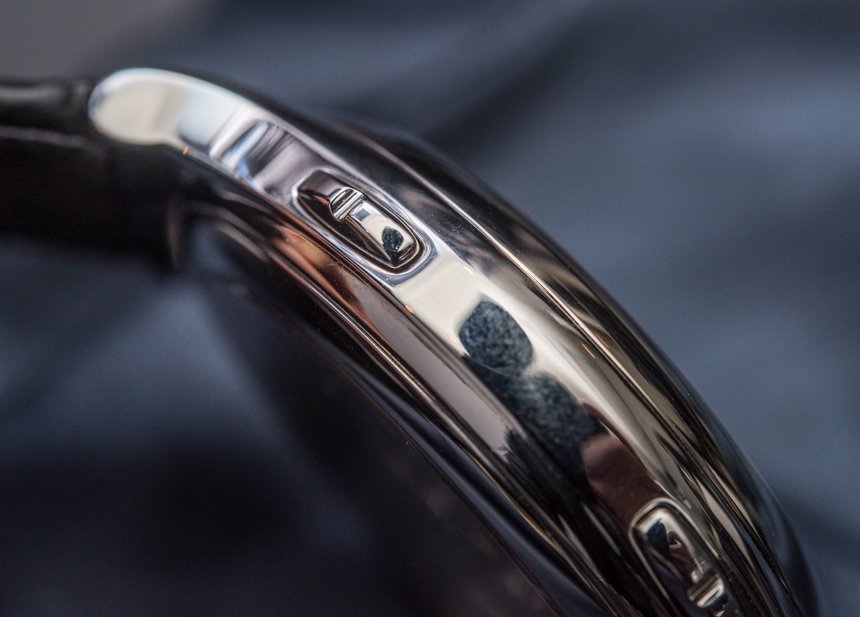 The watch’s main complication, aside from the time and date, is the dual-time function. Thanks to the beautifully polished oblong pushers on the lefthand side of the 41mm non-rhodium plated 18 karat white gold case, the local time can be set forward and backward with ease. The top pusher advances the central hour hand forward by one hour, and the bottom pusher moves it backward. The home time is indicated by a 24-hour disc viewed through an aperture at 9 o’clock, while the date window can be found at 3 o’clock, next to the ball-shaped 18 karat white gold winding crown. The 24-hour aperture to indicate a second time zone is a very elegant solution that allows for the omission of an AM-PM indicator, or a subdial and hands which clearly would not have fit nicely into this design. 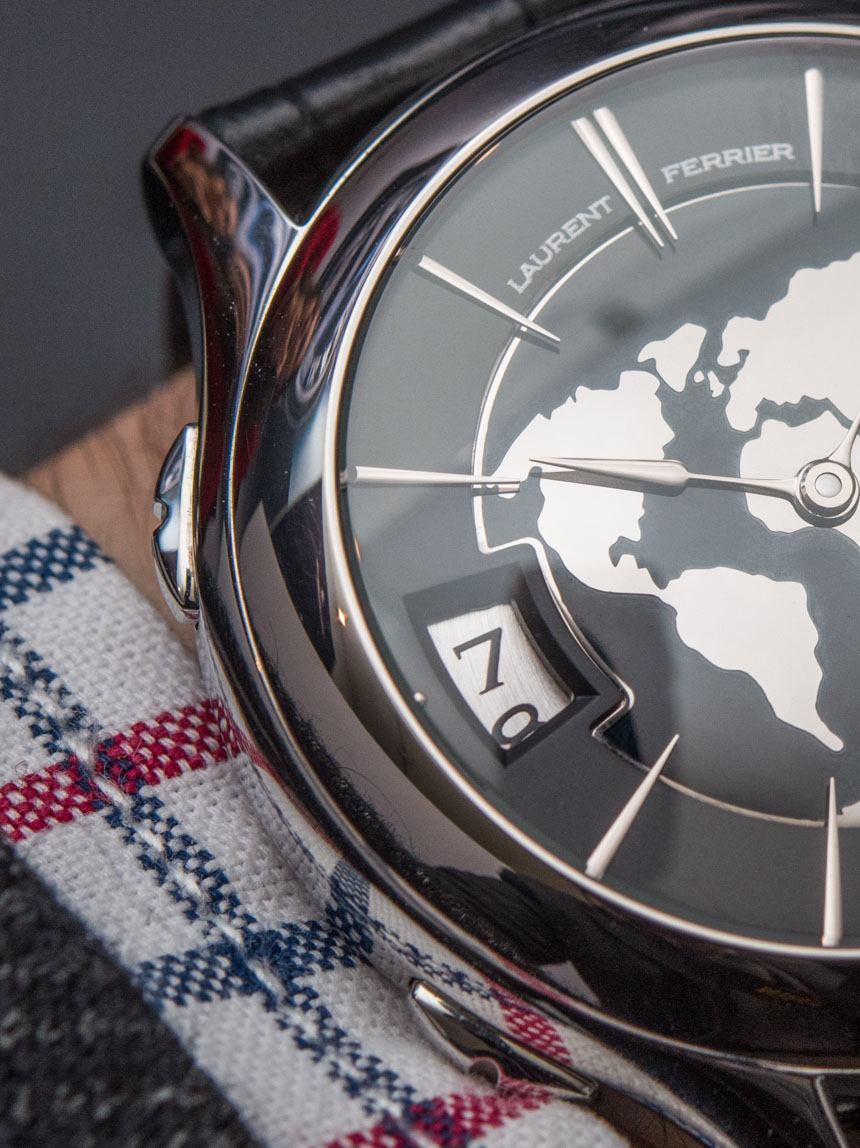 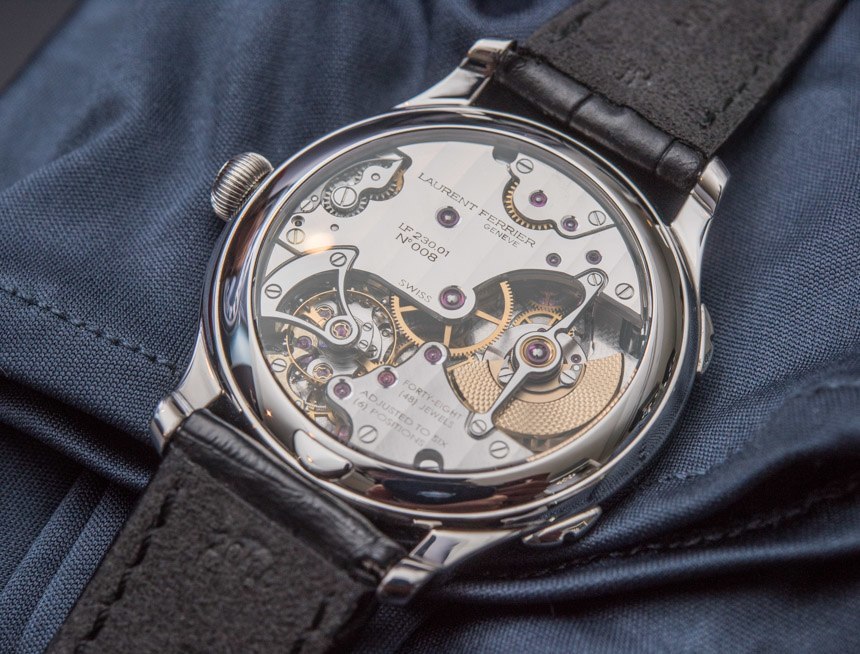 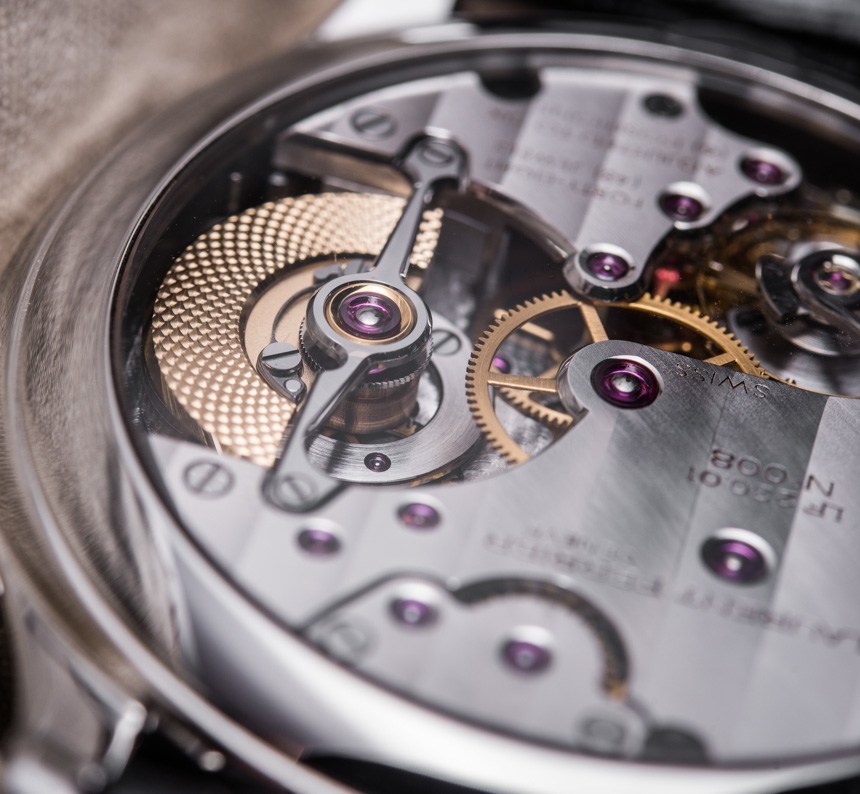 The Laurent Ferrier Galet Traveller Globe Night Blue is powered by the automatic LF230.01 movement. This calibre features an off-centre, unidirectional-winding micro-rotor in 18 karat gold. Ferrier has used this kind of rotor to great effect before (check out an older Laurent Ferrier watch using an eccentric rotor here). A silicon pallet fork that engages with an escape-wheel made from a phosphorous nickel alloy renders lubricants for the escapement redundant. This combination of futuristic materials massively reduces the friction in this most essential time-keeping component of the watch. 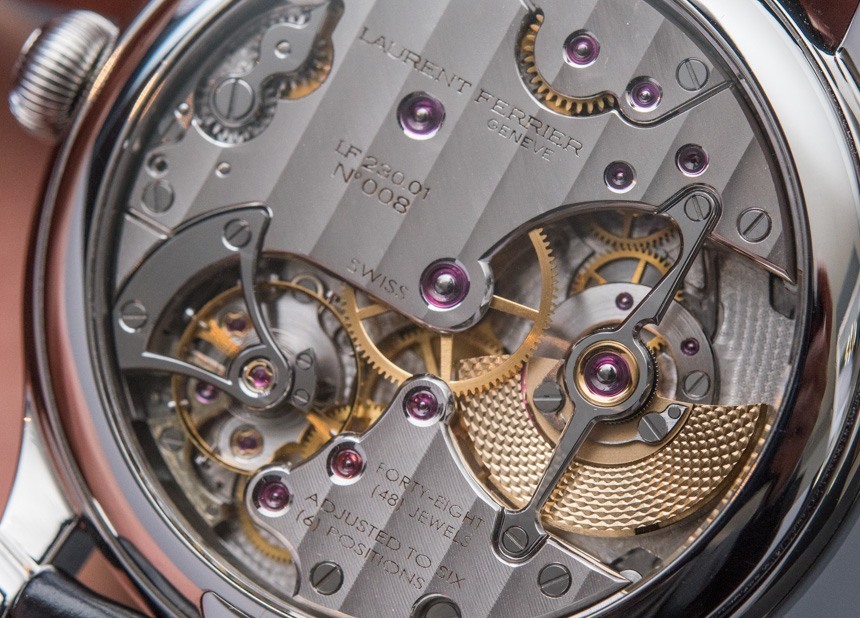 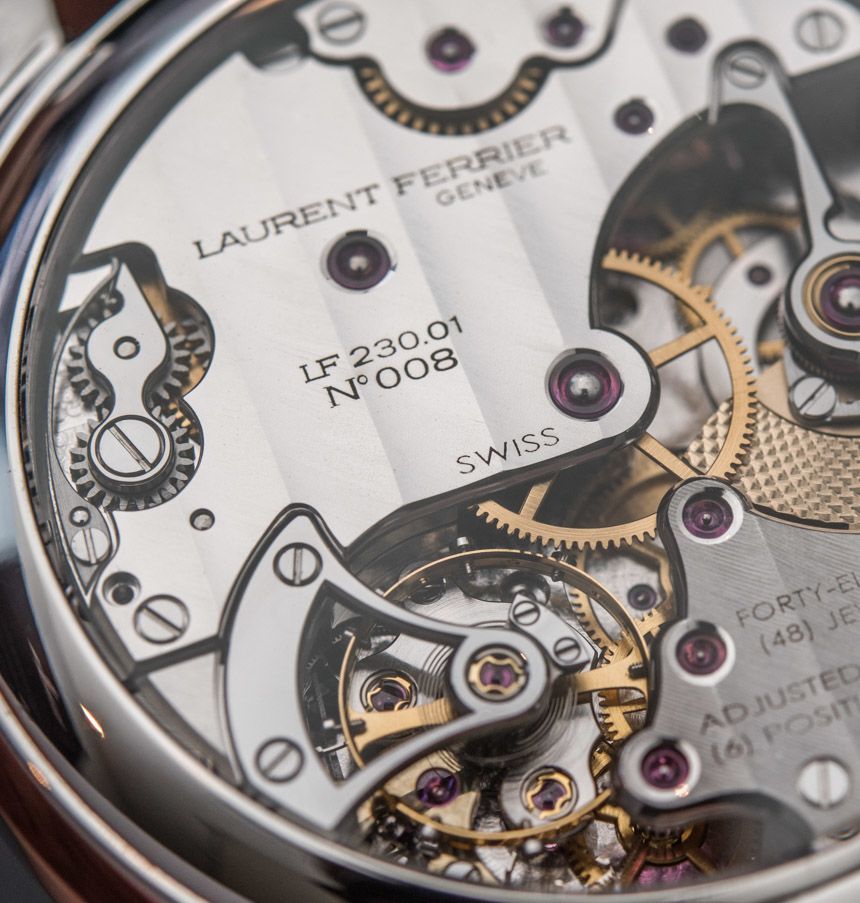 As with previous Laurent Ferrier watches, the Laurent Ferrier Galet Traveller Globe Night Blue is moderately thick, measuring 13.70mm. The case design is incredibly smooth and highly polished, reminiscent of an organic form given mechanical function. Despite the gracility of the case, the Laurent Ferrier Galet Traveller Globe Night Blue boasts a power reserve of 80 hours. This is likely increased by the low level of friction throughout the movement, by its employment of avant-garde materials, and the use of 44 jewels to reduce drag. The watch comes on a hand-sewn alligator leather strap with an alcantara lining. You can also choose between a 16mm pin buckle or double-blade folding clasp, both in 18K white gold. 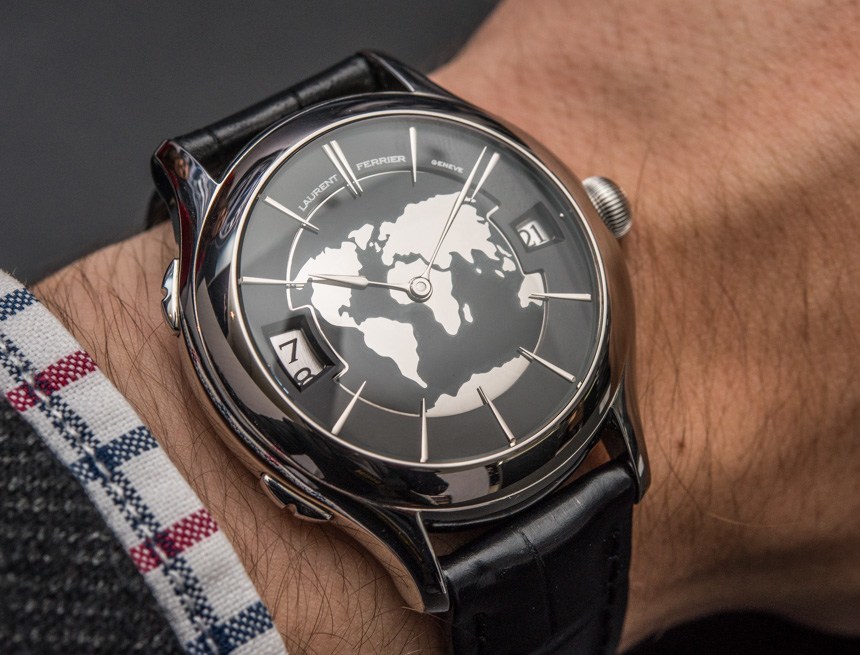 Overall, this watch is another terrific-looking and -functioning entry into the ever-expanding and ever-competitive world of luxury GMTs. This Laurent Ferrier Galet Traveller Globe Night Blue watch has its aesthetic roots in a dressier sphere than many similar models, but it stands-out for that reason. Personally, I prefer this kind of easy-to-read second-timezoner simply because there is often a lot of information on display that can be obfuscated by over-complicated aesthetics. This piece is able to present a luxurious design alongside a very simple, extremely user-friendly complication and so can carry off its extravagances without a problem. The Laurent Ferrier Galet Traveller Globe Night Blue is priced at $87,000. laurentferrier.ch