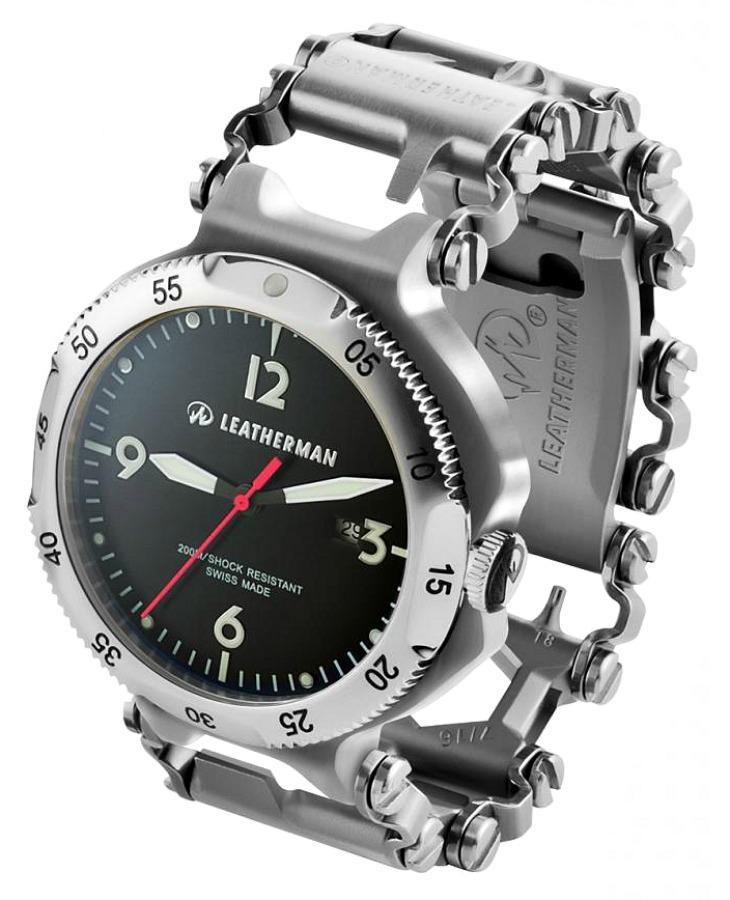 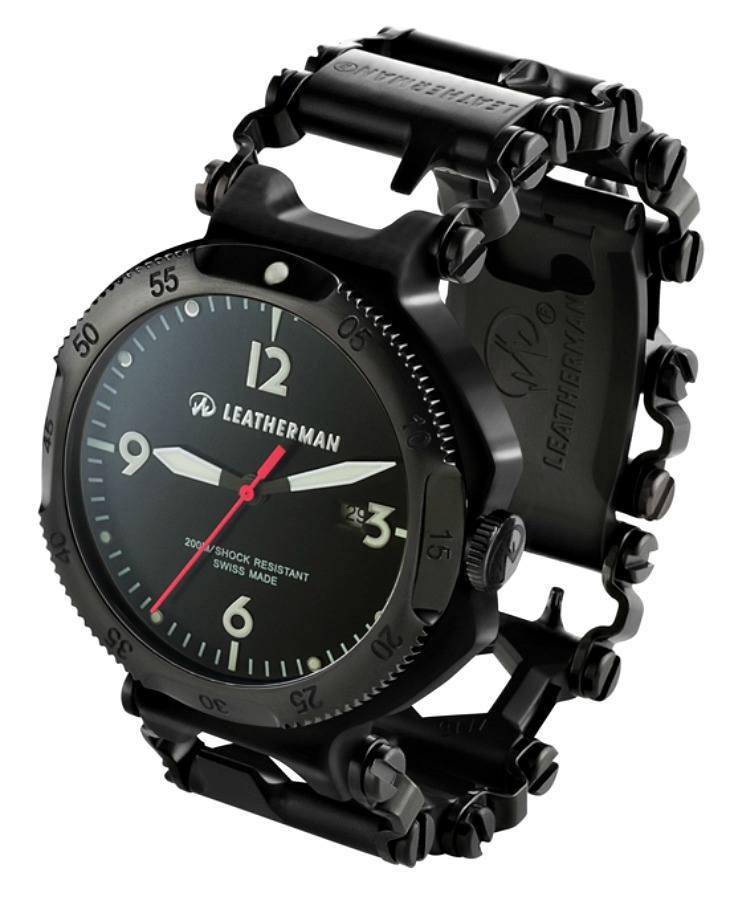 The American company Leatherman – known for their very useful folding multi-tools – will soon release a tool-bracelet known as the Tread. The Leatherman Tread will have 11 interchangeable links that each have a few tools such as screwdriver heads of various styles and sizes. Leatherman will offer the Tread as just a bracelet or make it available with an optional watch case – making the Tread a full-fledged timepiece.

According to Leatherman, the Leatherman Tread watch will have a total of 25 tools – and the integration of all the tools is rather clever, I must say. Each link, for example, has two tools on either side such as a screw head or a small cutting instrument. The center of the link might be used to unscrew various bolts. It appears as though most of the tools can be used without dissembling the Leatherman Tread merely by taking the bracelet off and folding the links to expose a tool. 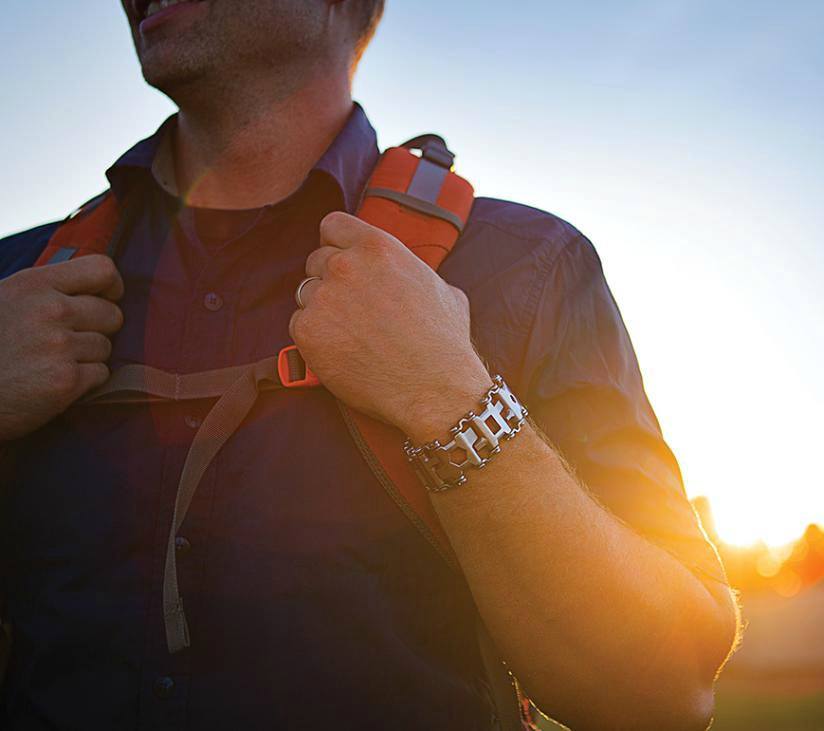 How comfortable the Leatherman Tread watch will be is another matter. Leatherman has mentioned that its people have been wearing and testing the Tread for some time, and that they report it being totally acceptable to be worn on a daily basis. That said, you have a bracelet with a lot of sharp edges and parts which can snag on things. It is also unclear how heavy the Leatherman Tread will be – as weight is an issue that will no doubt turn some people off. Another important issue is how well it fits. Too loose and the Tread starts flopping around and becoming uncomfortable. If you remove links to make the Leatherman Tread smaller, then you might have to make difficult choices about what tools you are sacrificing in order to have the bracelet fit properly.

Then there is the matter of the optional watch dial portion of the Leatherman Tread – the element which makes the Tread interesting for aBlogtoWatch. While Leatherman has not yet released detailed facts such as the watch case size, we know that the Leatherman Tread Watch will contain a Swiss quartz movement and have a sapphire crystal over the dial. The case is also water resistant to 200 meters. Around the dial is a rotating bezel.

The Leatherman Tread Watch is attractive enough with a familiar military/pilot watch style that is both legible and decently attractive. The style is predictably conservative, given Leatherman’s target audience – which is probably not people who wear watches on a regular basis. I find it interesting that Leatherman decided to go the full analog route (rather than have a digital dial) – which is another sign that they are trying to be style conscious. 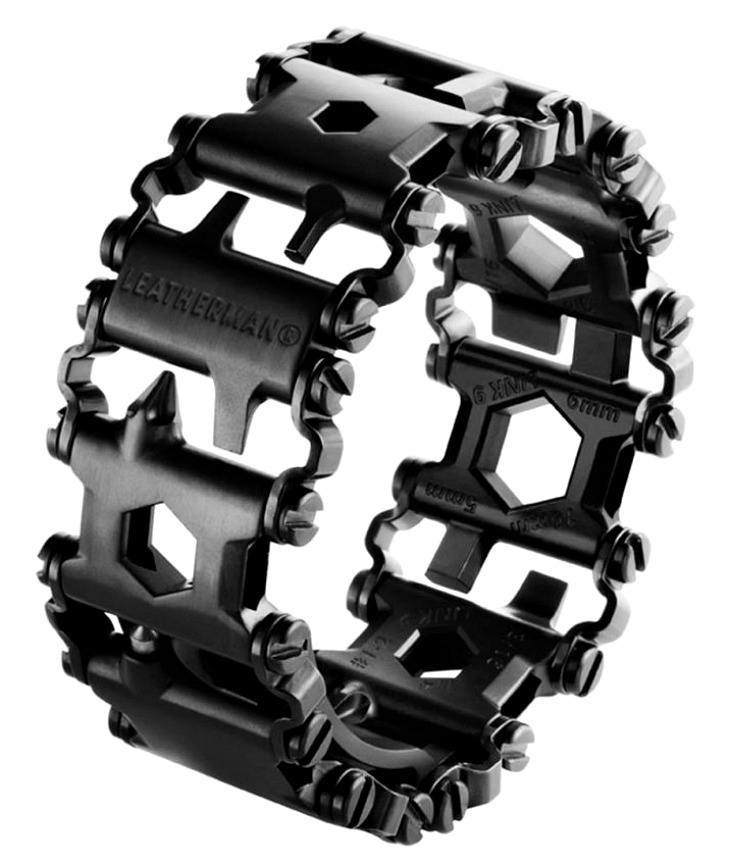 Is the Leatherman Tread a legitimately useful tool or a lifestyle item for guys who want others to think they know a little bit about being “hands-on?” That is a good question. While the tools on the Leatherman Tread likely work nicely enough, they are mostly suited to emergency purposes when you have nothing else available. Trying to unscrew anything with the Leatherman Tread is going to be an extended manual process. I think Leatherman will likely sell a lot of Treads – especially those with the watch attachment, but no one will use one to replace their traditional Leatherman or other mutli-tool.

One popular question about the Leatherman Tread is whether or not it is TSA compliant? Leatherman has confirmed that “YES,” the Leatherman Tread complies with TSA regulations and can be taken aboard flights (at least in the US). That fact does add an additional level of consumer desire for those who like to feel “prepared.” As we enter the era of wearable technology, items like wearable tools will make a bit more sense. A tool bracelet will look a bit cooler than a little leather or fabric pouch hanging on your belt with a tool in it – but you do, of course, sacrifice a degree of practicality and convenience. According to Leatherman, the Tread will be priced at about $150 – $200 when it comes out later in 2015 (sometime between the summer and fall, according to the company). More from Leatherman here.