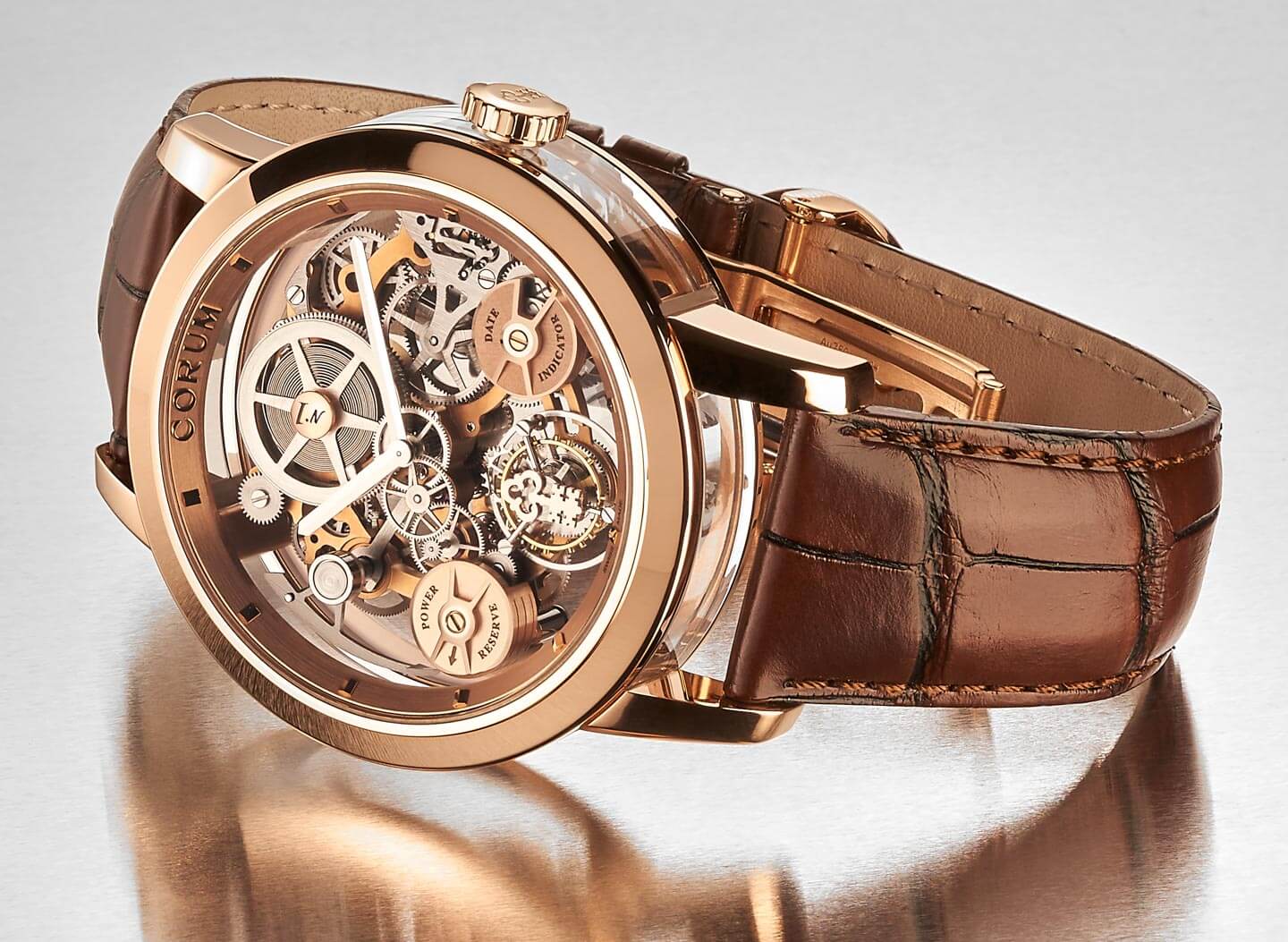 A large part of Corum’s legacy has been built on its innovative design work on gear trains, with watches like the iconic inline Golden Bridge dominating its place in the enthusiast community. For its next major step in advanced movement design, Corum has taken the concept of the flying tourbillon to its logical conclusion, creating a movement containing not just a flying tourbillon but a fully flying gear train almost entirely devoid of bridges. After two full years in development, the limited edition Corum LAB 02 achieves this with an impressively balanced and cohesive design.

The 45mm case of the Corum LAB 02 exists primarily as a showcase for the skeletonized flying gear train movement within, and as such keeps the overall form simple and fully polished. Available in both rose gold and white gold variants, this case features a central case band made of sapphire to allow an excellent view of the movement from almost any angle. For those looking for even more flash, Corum also offers buyers the option of custom diamond cuts, settings, and even colored gemstones for encrusting. 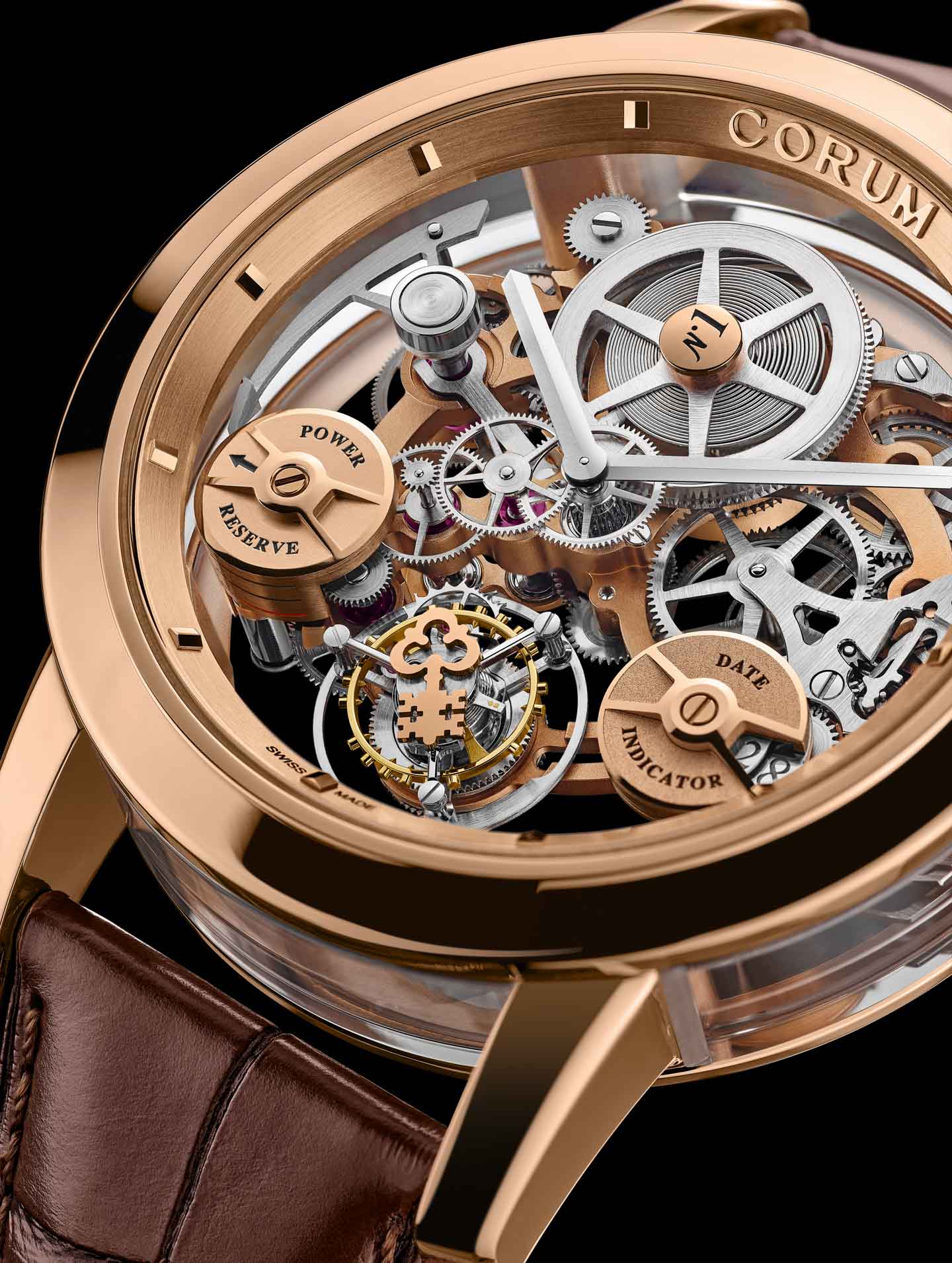 With such an extreme case of skeletonization, talking about the dial of the Corum LAB 02 can be somewhat misleading. Strictly speaking, there really isn’t one beyond a pair of stick hands and an engraved chapter ring, but in practice the layout of the LAB 02’s movement leads to a far more balanced layout than many skeleton dial contemporaries. The view is dominated by the prominent mainspring barrel at 12 o’clock, visually counterbalanced by the 6 o’clock flying tourbillon. Capped with the ornate Corum key emblem, this tourbillon element fits perfectly into the rococo yet balanced sensibilities of the overall design while remaining technically impressive in its own right. At 4 o’clock and 8 o’clock are the LAB 02’s additional complications, visually mirroring each other in design to maintain the harmonious presentation of the movement. For the 4 o’clock module, a grand date is used, while the 8 o’clock power reserve indicator actually moves its useful marker to the case side to decrease visual clutter on the dial. 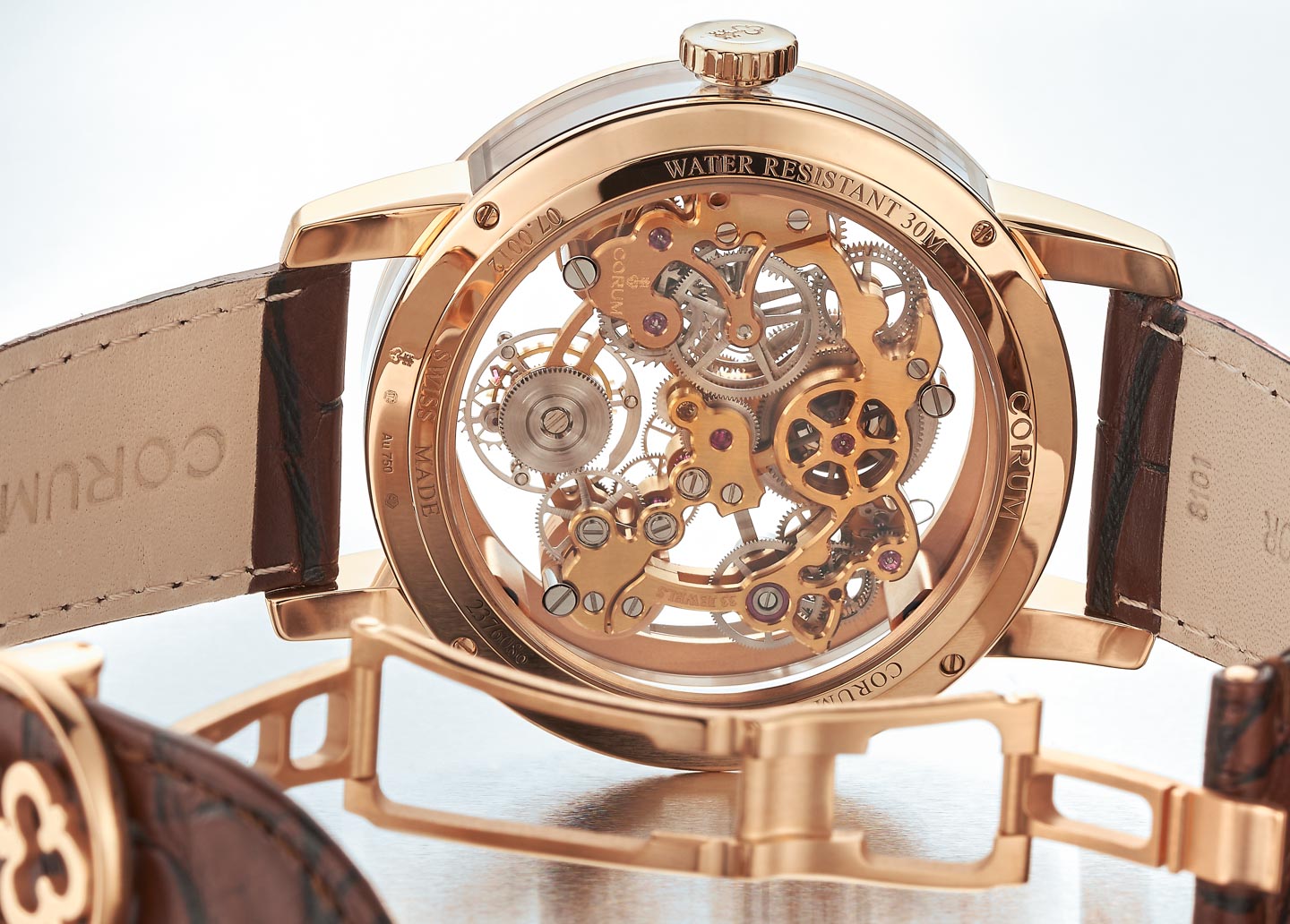 Of course, the in house handwound CO 300 movement is the heart and soul of the Corum LAB 02. Although the inclusion of a flying tourbillon is a difficult technical achievement on its own, in order to achieve the flying gear train effect, the brand had to develop several innovative solutions. The only bridge of any kind in the movement is a narrow element mounted directly on the skeletonized mainplate, so in order to compensate for the loss in strength and structural rigidity Corum replaced all rubies on the mainplate with sturdier ball bearings. The rigidity problem is also addressed elegantly by mounting the entire movement on a sapphire plate between the extended gear train and the caseback. The CO 300 offers 55 hours of power reserve and a 21,600 bph beat rate. 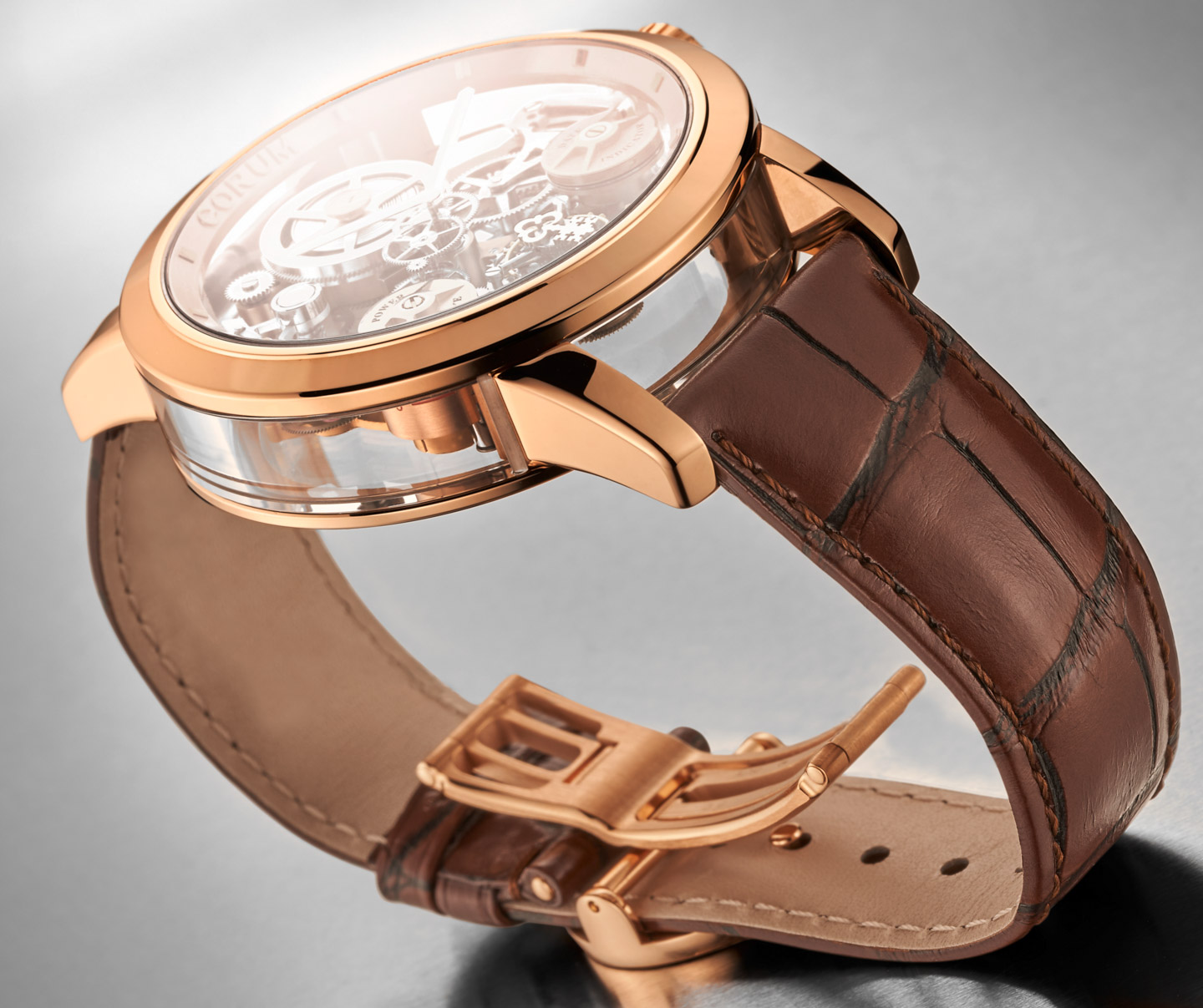 Corum completes the LAB 02 with an alligator leather strap in either black or mahogany brown. This suitably elegant pairing is capped off with a matching gold butterfly deployant clasp. 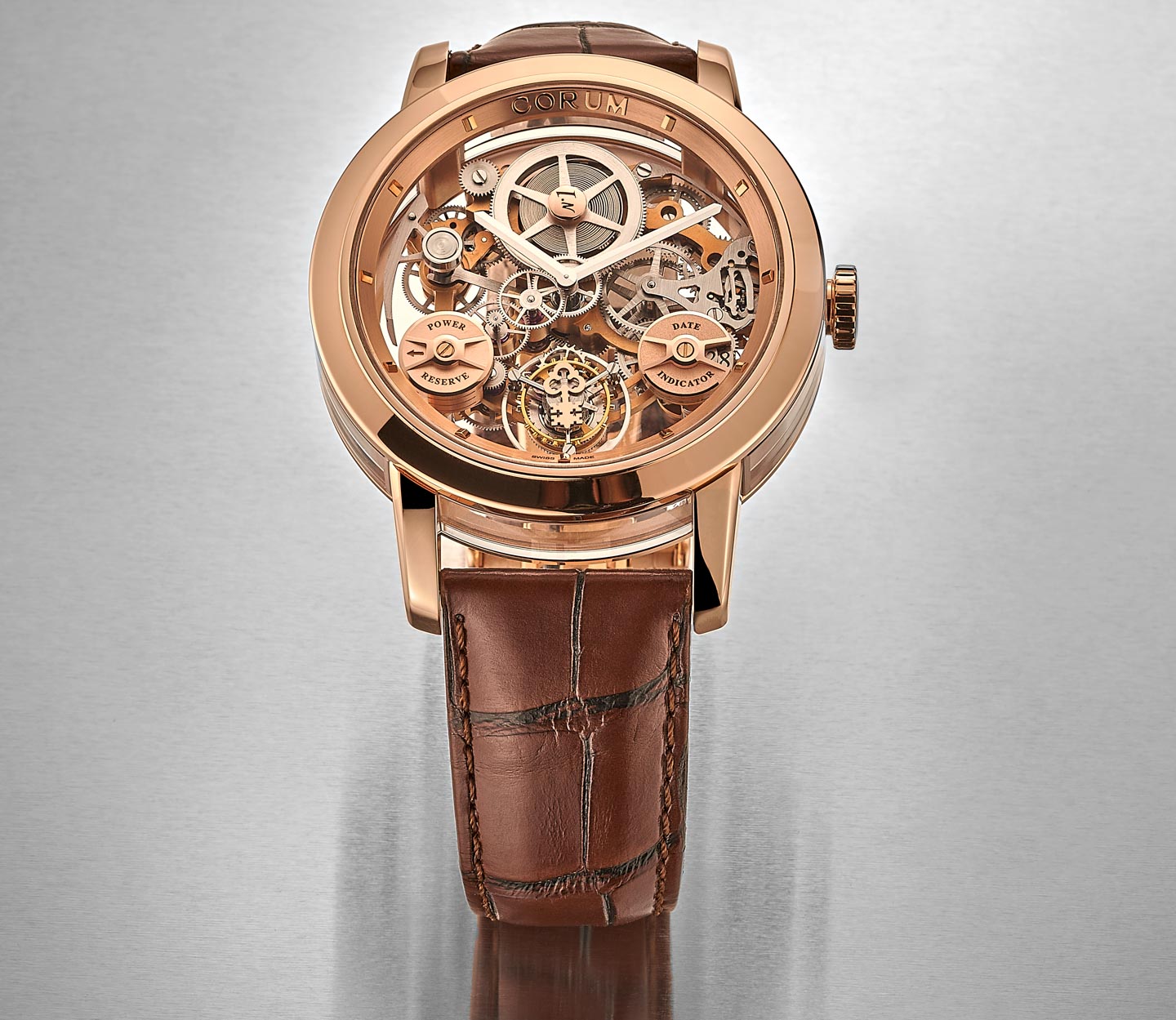 With the LAB 02, Corum continues its legacy of innovative and artistic movement design with a remarkably clean and harmonious haute horlogerie offering. Only 10 examples of the Corum LAB 02 will be made to buyers’ custom specifications, with pricing beginning at 180,000 CHF. For more information, visit the brand’s website.