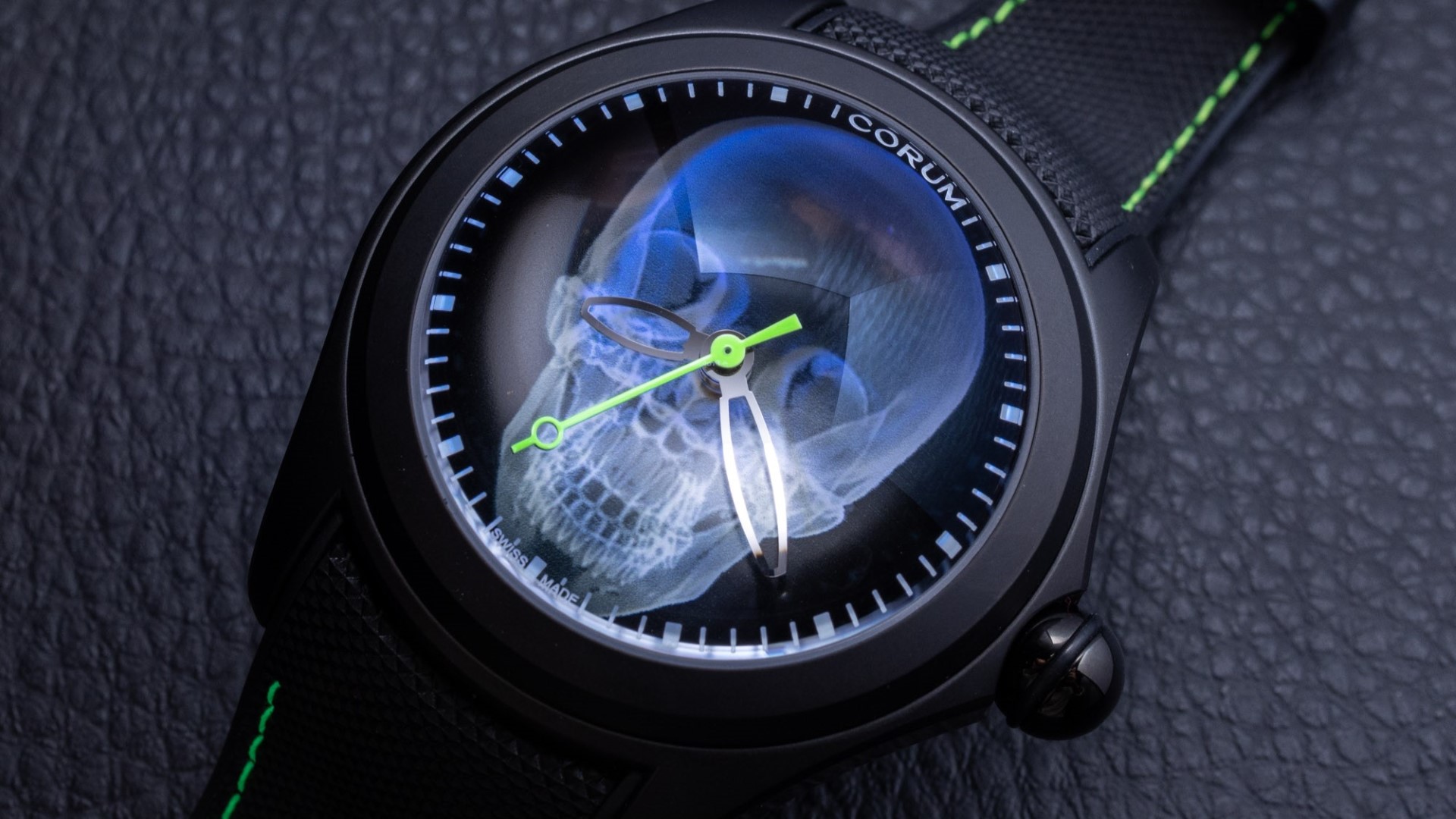 In a way, it seems like Corum is several brands in one. Given its range, from haute horlogerie, like the Golden Bridge and Lab collections, to the nautical-themed Admiral line, to the avant-garde Bubble, it can be difficult to pinpoint exactly what Corum is and for whom its watches are made. The flip side of this, of course, is that Corum makes something for everyone: You can get a solid-gold LAB02 Skeleton with a flying gear train for CHF 183,000, or you can buy an automatic Admiral with nautical pennant hour markers for CHF 4,400. Looking at the entire catalog, you could cover all your horological bases exclusively buying Corums.

The Corum Bubble, though, seems to garner the most oohs and ahhs (and maybe a few cringes).  Introduced in 2000, the Bubble was the brainchild of Severin Wunderman, who had recently acquired the historic brand. The avant-garde design, with a massive domed crystal and jumbo-sized 44mm case was, in part, inspired by a 1960s dive prototype with an enormous crystal Wunderman had seen (presumably the Rolex Deep Sea Special). A skull dial was offered as one of the first options, apparently reflecting Wunderman’s fascination with life and death, and taking inspiration from depictions of skulls from Día de los Muertos. The Corum Bubble Skull X-Ray revisits that original design and continues the collection’s bold, outlandish design tradition with a fascinating dynamic skull design and a few extra dashes of color. 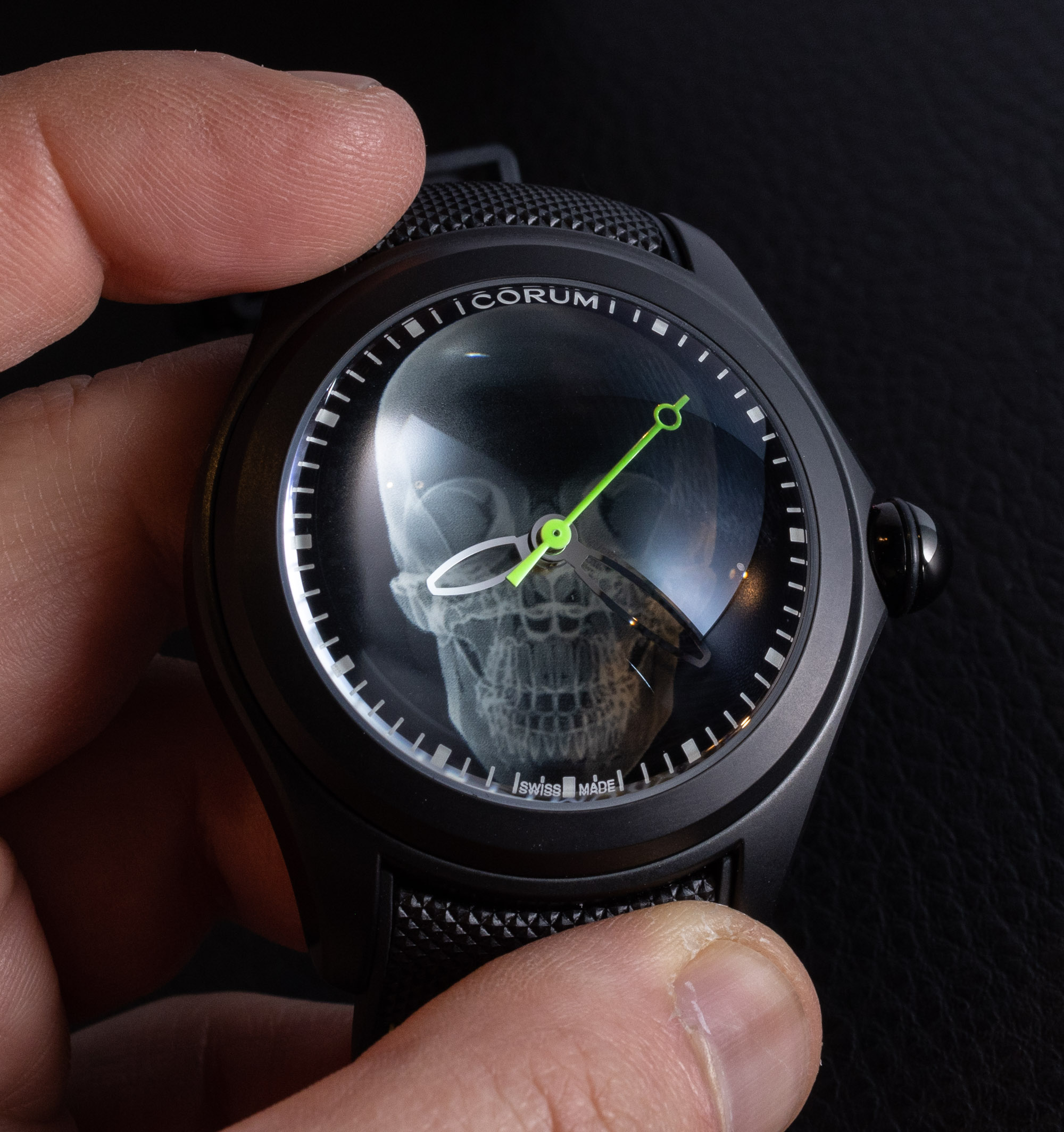 This is not the first Corum Bubble Skull X-Ray. Last year, to celebrate the Bubble’s 21st birthday — its “coming of age,” as the brand said — the company released the first Skull X-Ray model. While that also had a 47mm stainless steel case with black PVD coating and the same skull design, it was limited to just 88 pieces. One assumes they sold well because this year’s limited edition features some subtle upgrades and an expanded release of 666 pieces. The Corum Bubble Skull X-Ray has a pronounced 8mm domed sapphire crystal that creates intentional distortion. You’ll notice that there aren’t any Bubble models with run-of-the-mill dials; everything has some sort of graphic or added depth or design that is amplified and transformed by the crystal. To be sure, without the massive sapphire, this would simply be another oversized watch (and the name wouldn’t make much sense, either). 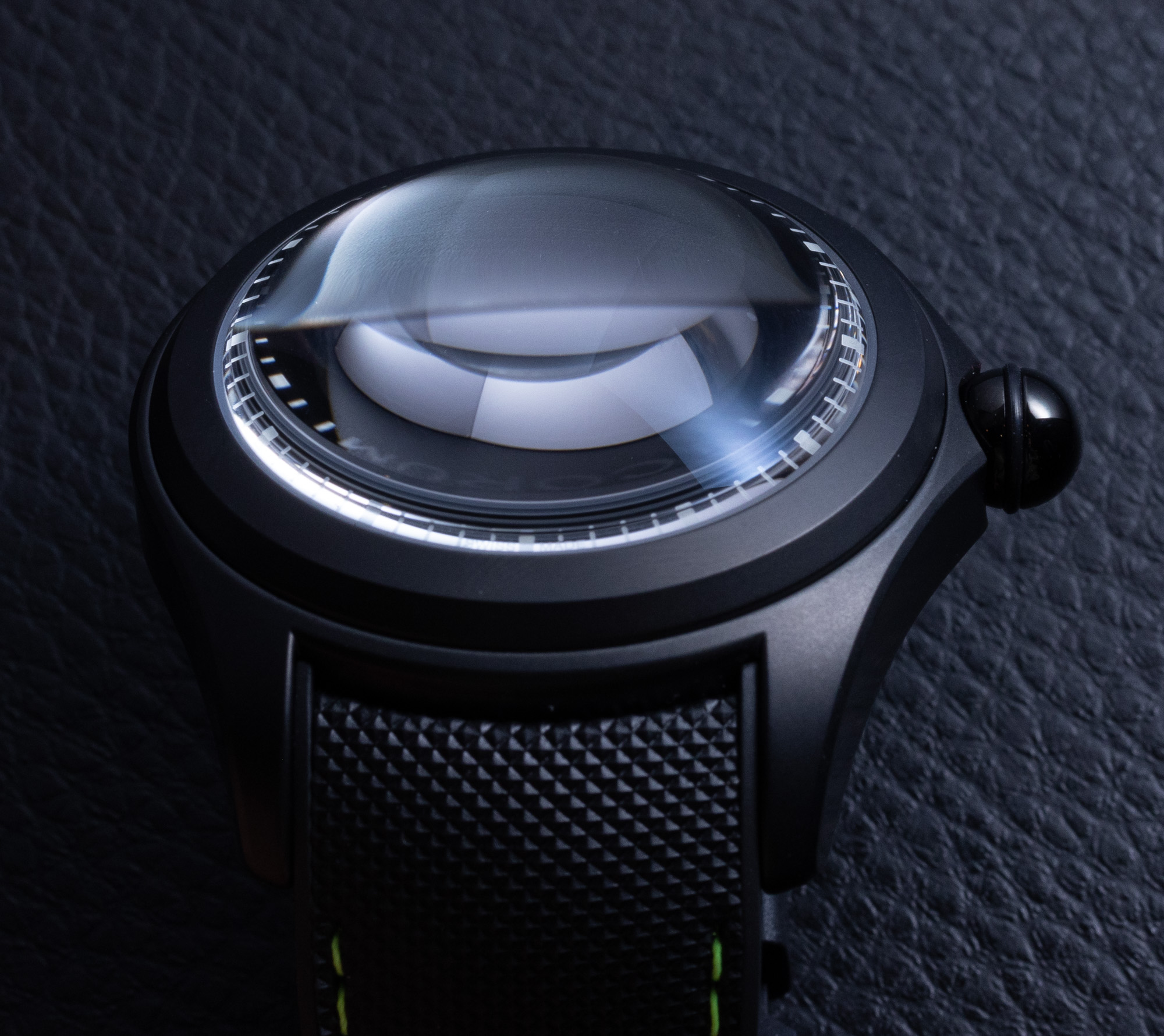 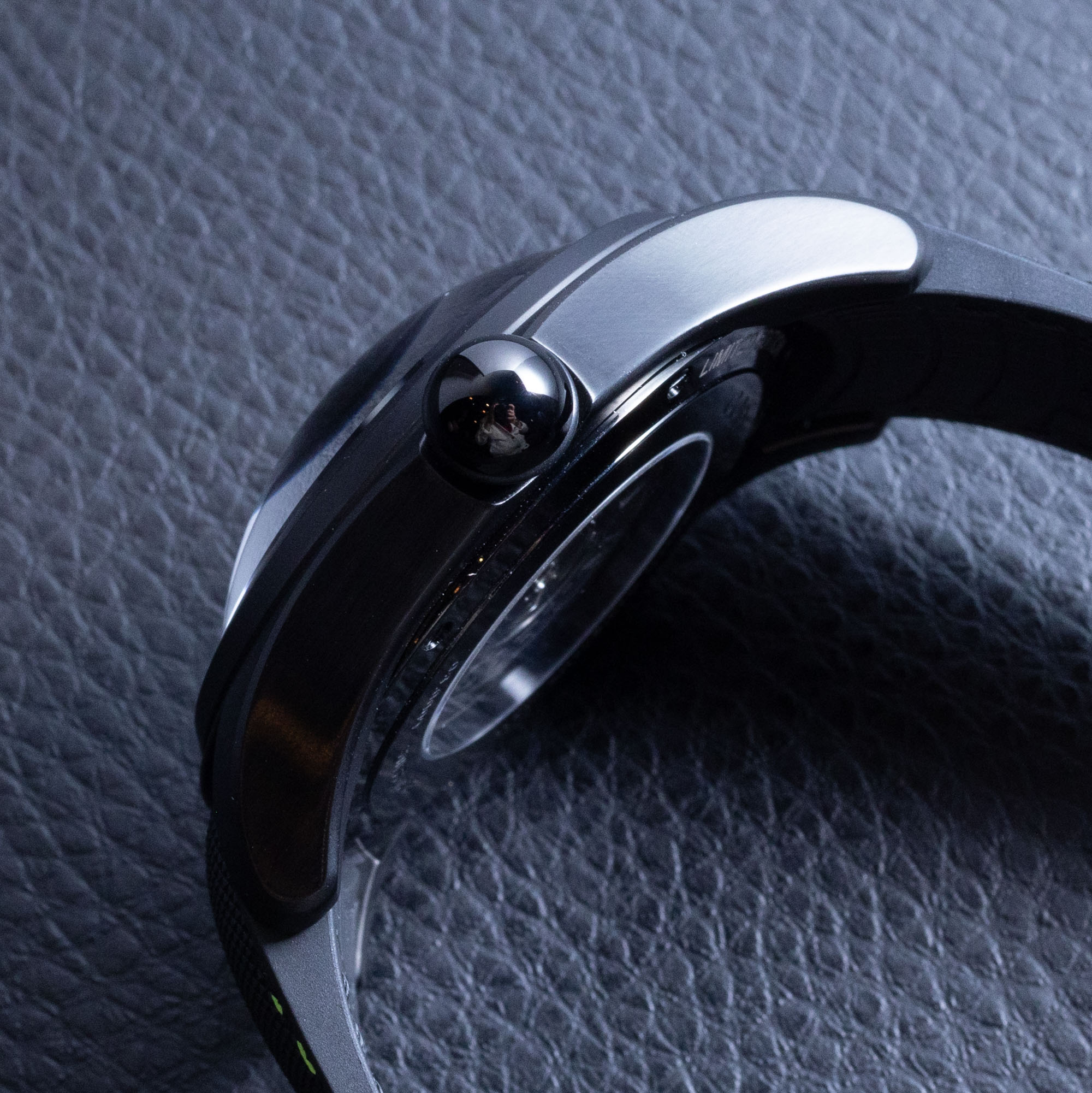 Despite its dimensions (including a cuff-defying 18.5mm height), the Bubble wears shockingly well, which is mostly down to its short, curved lugs that descend below the caseback and hug the wrist. Furthering this effect are the molded ends of the 24mm strap which features a synthetic top with rubber backing. It thickens as it joins the case, matching the case’s curved silhouette and facilitating even greater comfort on the wrist. The simple pin buckle means you won’t be dealing with any added thickness from a bulky clasp, though some people with more adventurous lifestyles may be a bit worried; for what it’s worth, the watched seemed quite secure while on the wrist. The crystal’s dome is complemented by a polished screw-down crown, nested in subtle crown guards, that offers 100m of water resistance but can be a bit slippery given the thin rubber grip and its shape. While complementing the crystal, the crown does offer a bit of contrast to the brushed finish on the case, except for a thing chamfer along the edge. 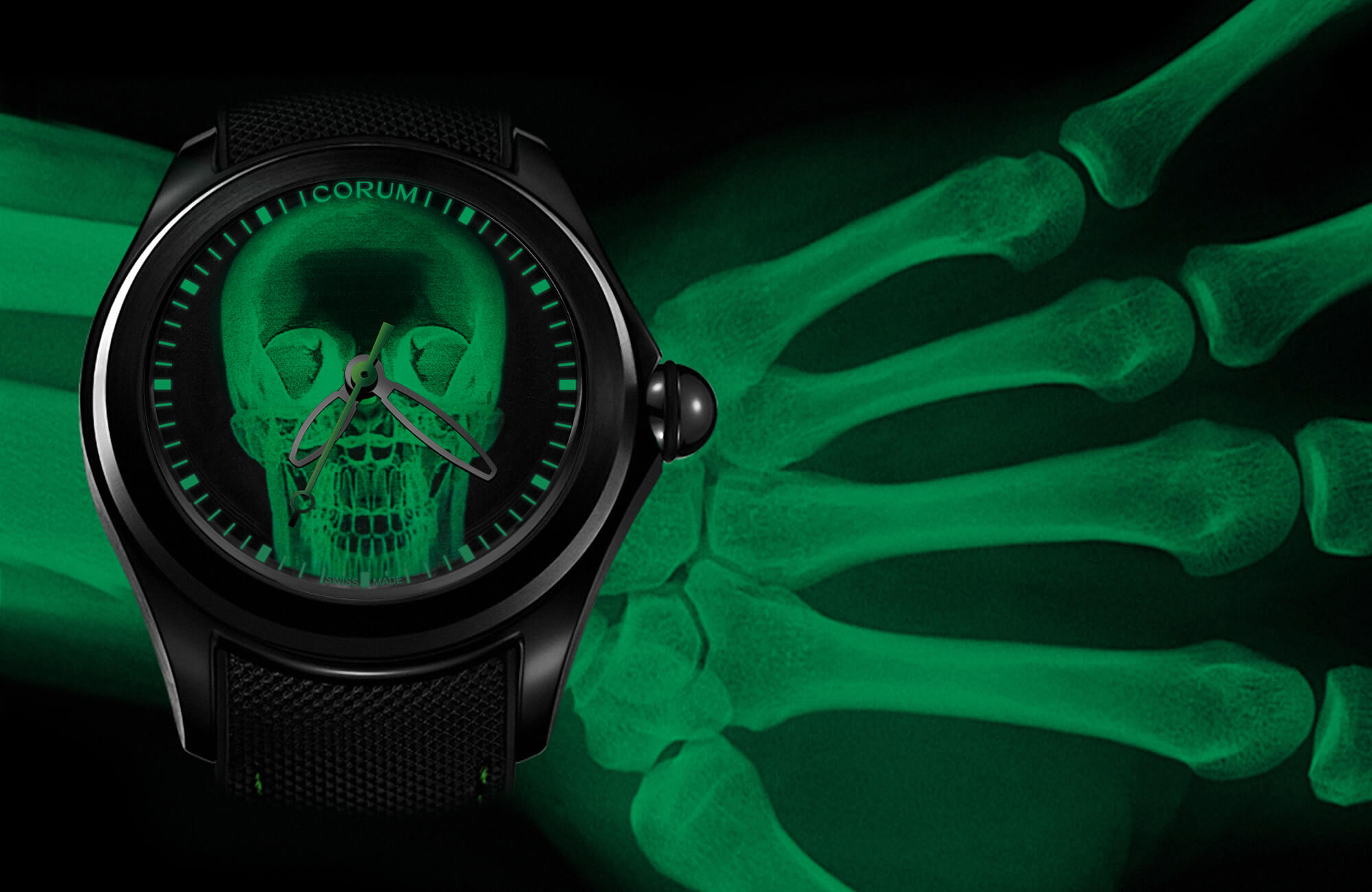 Enough chatter about the big case! You want to know about this dial. The dynamic three-dimensional skull is achieved with multiple layers of sapphire and is oversized, extending beyond the main dial and encroaching on the minute track. Its grin is at once disturbing and captivating, shifting constantly depending on the viewing angle and the light. If you think the darkness will make the scary skeleton go away, you’re wrong: not only is the entirety of the skull luminescent but so too is the strap’s green stitching! As an update from last year’s limited edition, the minute track and brand name are also now lumed with the same Super-LumiNova. What’s not lumed is the rhodium-plated handset, which includes a new varnished green seconds hand. Corum seems to favor skeletonized handsets when it uses graphic dials, and it serves to reinforce the notion the Bubble is as much an artistic statement piece as it is a watch. The use of such a handset here also allows the skull to do its thing without interference, and I will say that against the lumed design, the hands are discernable in the dark. 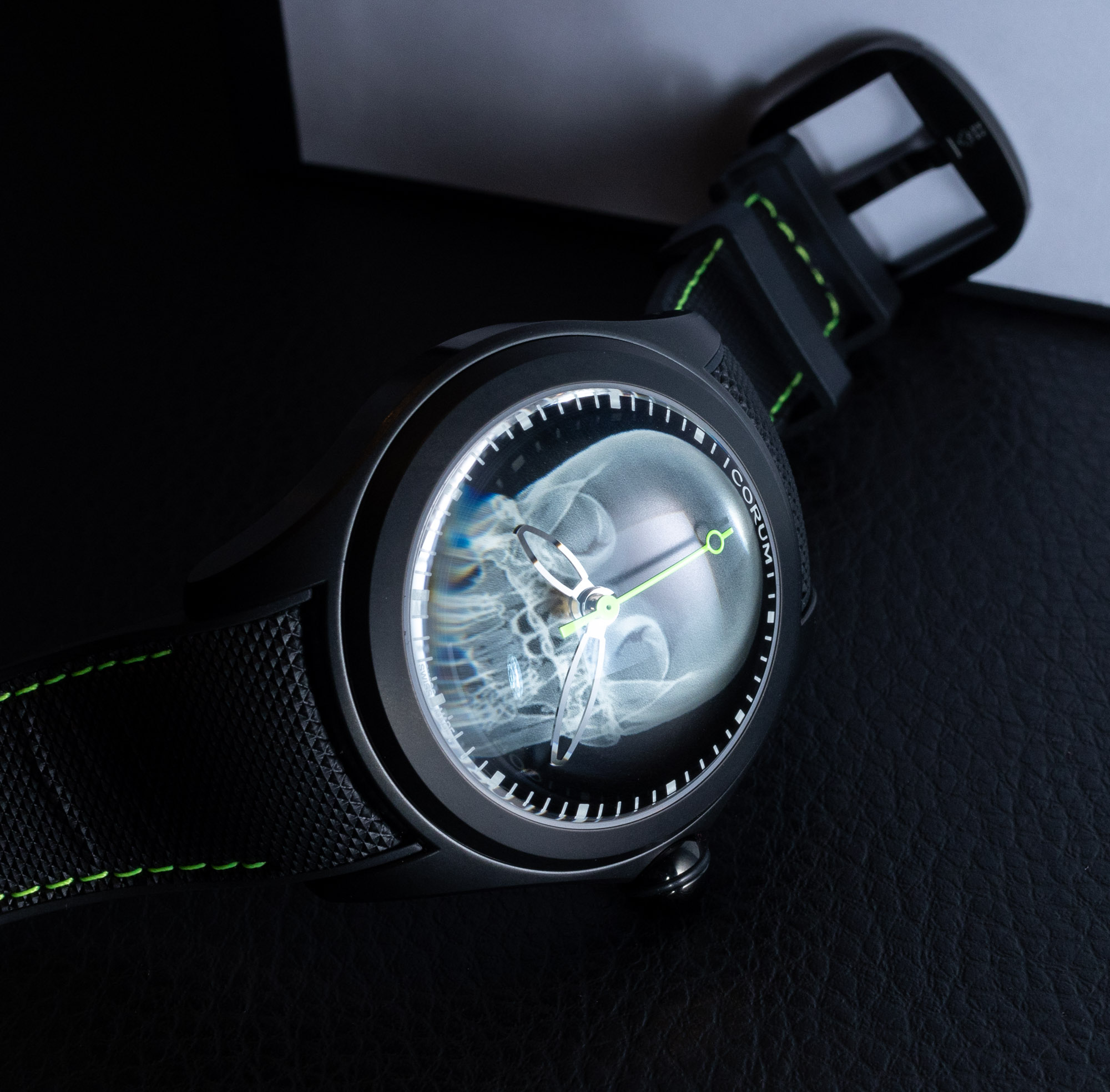 Powering the Corum Bubble Skull X-Ray is the Corum CO 082 caliber, an automatic Swiss movement based on the Soprod A10. Soprod has been manufacturing movements for quite some time, and while it doesn’t have the market share of ETA or Sellita, it’s becoming a more popular alternative as the bigger manufacturers increase prices and become harder to source.  Seen through a screwed-in caseback with a sapphire crystal display, the movement is not exactly a clone of the ETA 2892, but it is comparable. It has 25 jewels and a 42-hour power reserve and a 4hz frequency (28,800 vph). 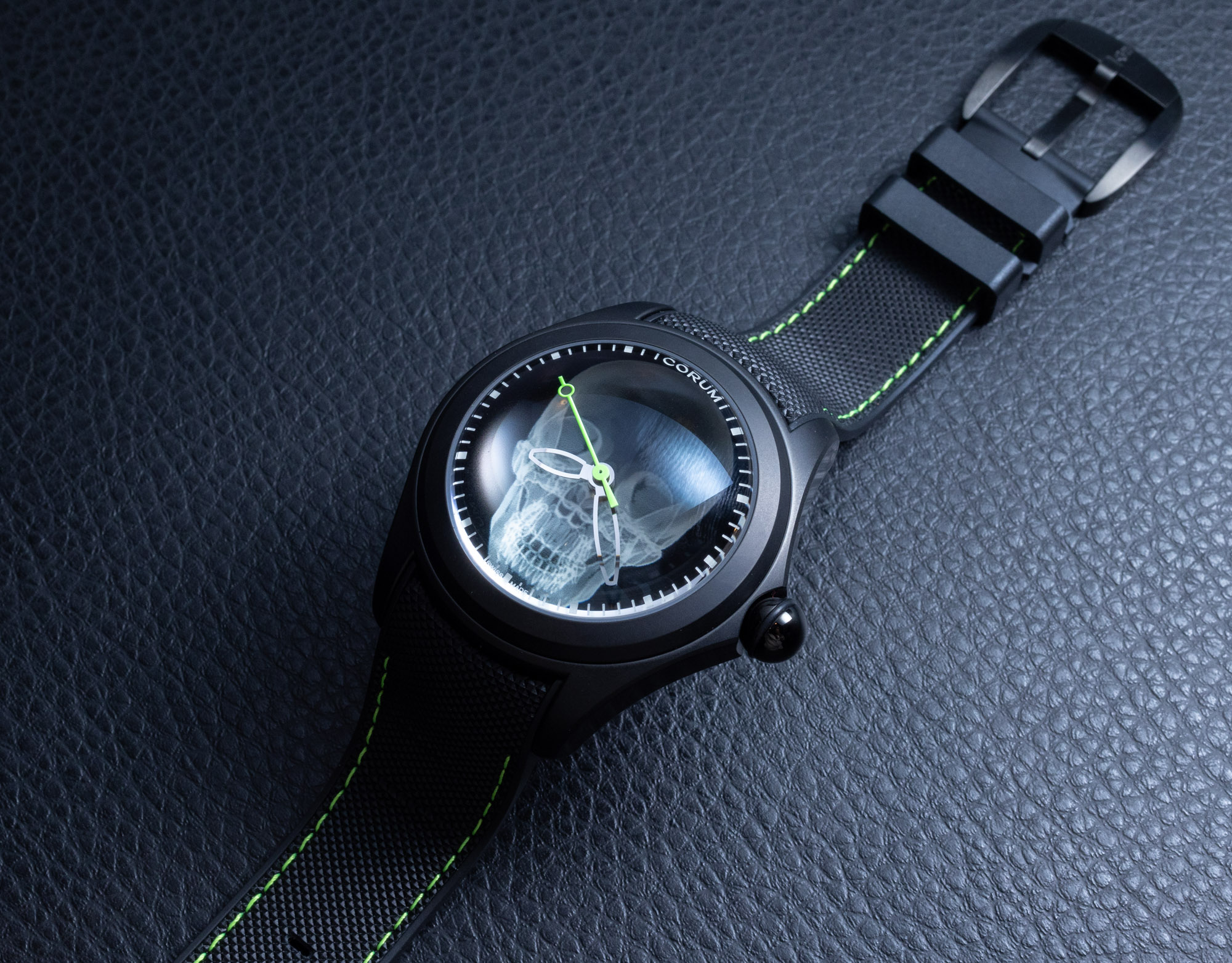 It may be the result of minor tweaks, but the 2022 edition of the Corum Bubble X-Ray Skull seems like the watch it should’ve been all along. The addition of the lumed minute track and the added pop from the green seconds hand really round it out. At 47mm, this is no easy wear, but that’s not the point. The point of the entire Bubble line is to make a statement. With its dynamic, lumed skull exaggerated by the massive crystal, that’s exactly what this watch does. The Corum Bubble Skull X-Ray is available now from authorized dealers in a limited edition of 666 pieces and is priced at $4,000 USD. For more details, please visit Corum’s website.