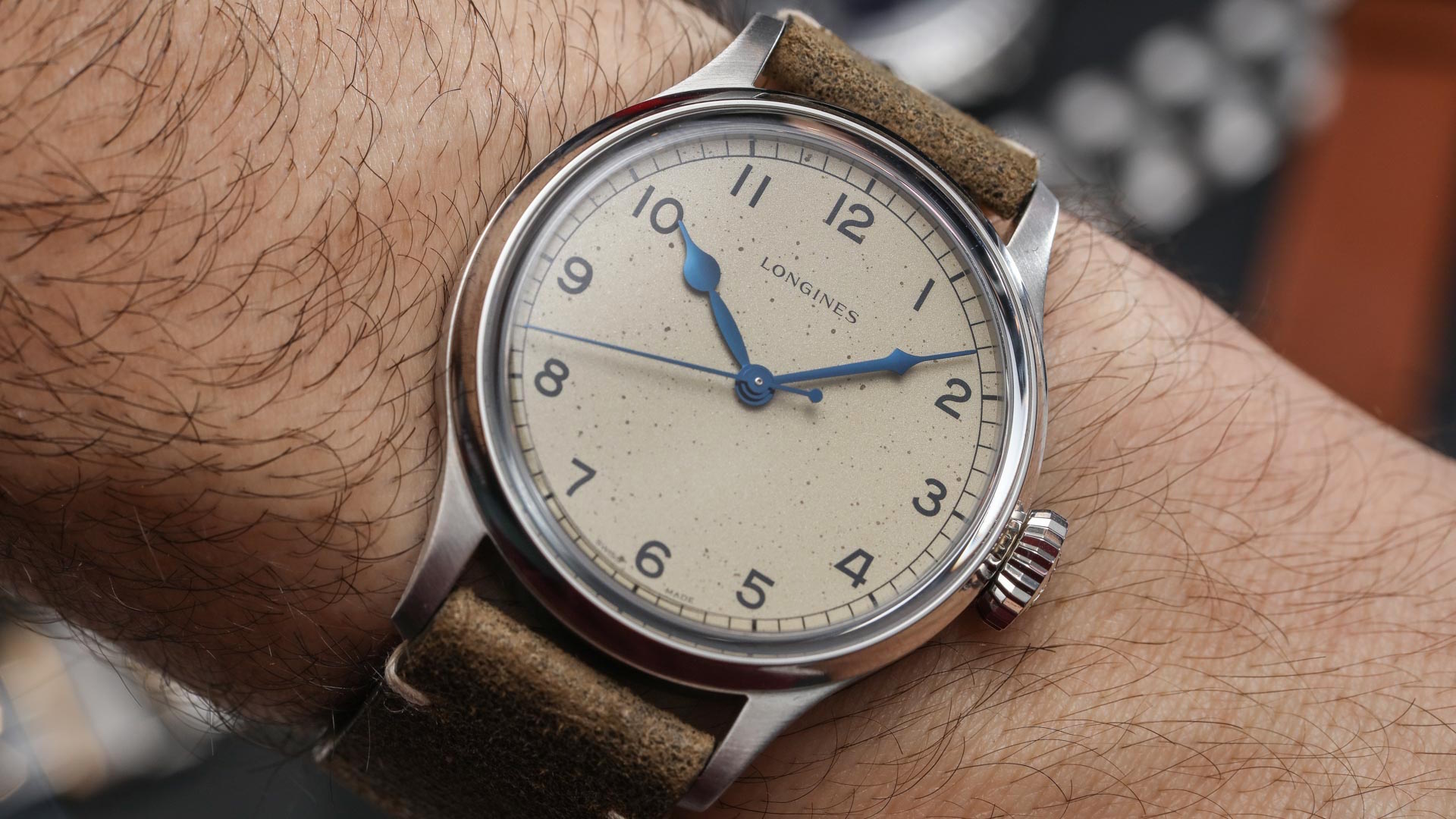 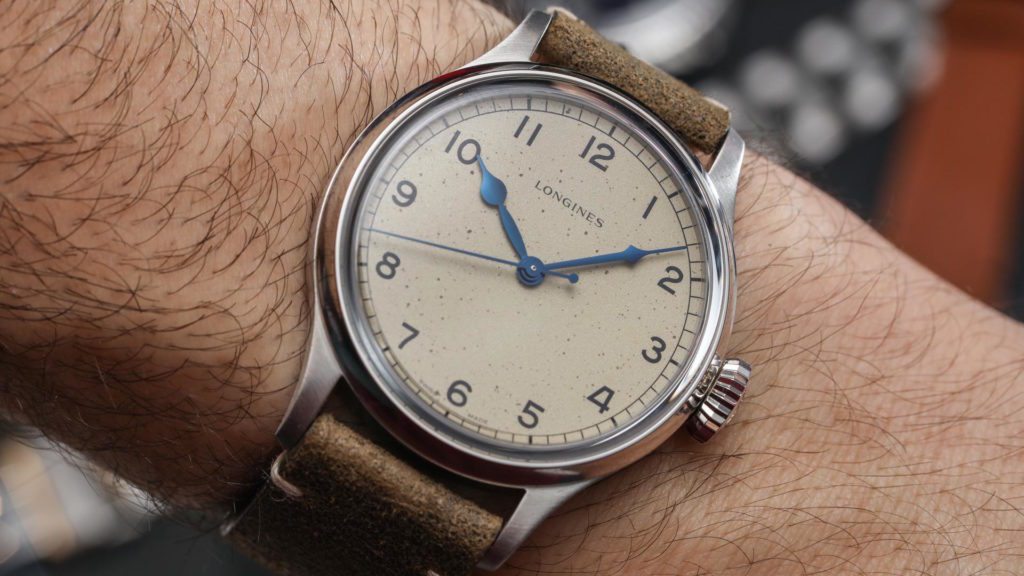 One of my favorite sleepers of Baselworld this year was a Longines reissue inspired by a 1940s pilot’s watch supplied to the Royal Air Force. While the vintage piece was a hot commodity, this modern take brings a faux-vintage charm and availability. The new-for-2018 Longines Heritage Military Watch has earned a bit of a reputation for spectators literally having to ask whether it’s actually new.

The Longines Heritage Collection has been well-received, albeit controversial, among some enthusiasts who are dead set against any fake patina. So, before we get into it, let’s step aside and separate ourselves from the controversy surrounding faux patina and instead talk about how to do it right. This watch does feature “fake” aging. I put “fake” in quotes because this is meticulously done by Longines and borderline indistinguishable from its 1940s counterpart short of a minuscule size difference. Short of having both the vintage and reissued watch next to each other, you wouldn’t know this was a new watch. This is some of the finest “faking” I’ve ever seen in a wristwatch. In fact, when I was first assigned this article, I had to do a bit of research on the original RAF Military watch, because I thought, ignorantly, that they maybe re-used old material a la Tockr with the D-Day C-47 Watch – they did not. 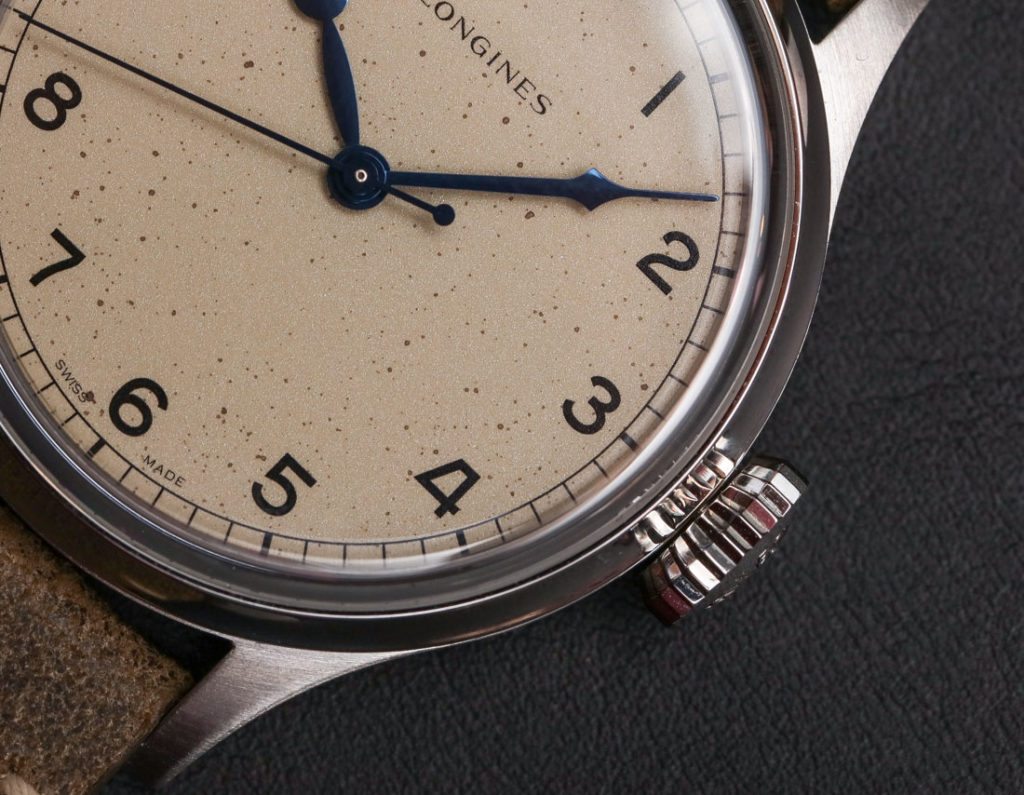 Let’s get to it. The brushed stainless steel case measures in at 38.5mm (thank God for not trying to “modernize” the size with a 42mm pilot’s watch), slightly larger than its predecessor, and wears quite well even on a larger wrist. While I don’t have the exact measurements of the thickness, the watch wears relatively thin, and really feels like a vintage piece. Lightweight, compact, well-sized, and unobtrusive – a true no-frills watch that looks and feels like a tool. The crystal is slightly domed sapphire with “several layers” of anti-reflective coating, making the watch superbly legible. The narrow and curved lugs give the watch a great profile and dip out of the way when paired with the oversized crown – making the watch easy to adjust on the wrist. 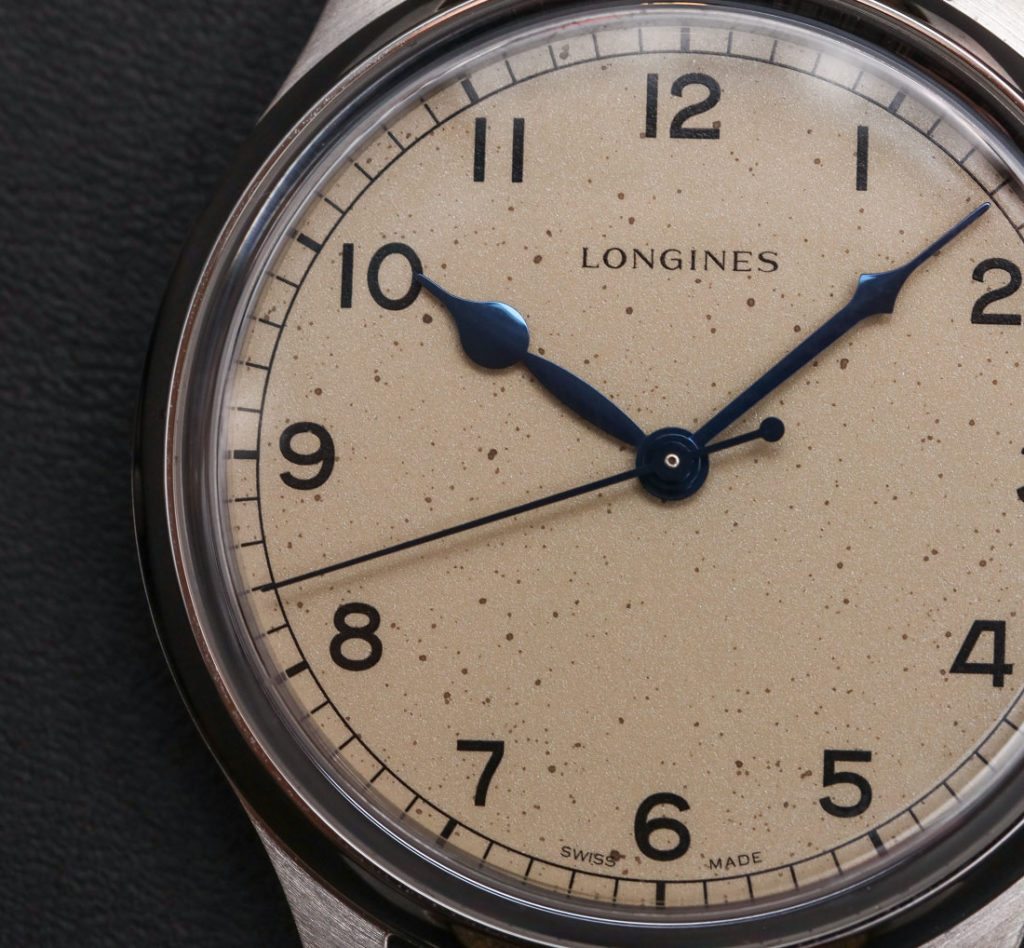 Hands down, the real focus on this watch is the dial. Longines, and the Heritage Collection specifically, has flirted with the faux patina look for as long as I can remember – I would argue there aren’t many other brands that have pulled it off as fluidly as they have. However, this is the first model that I’ve really ever felt enthused by.

The dial plate itself is (I would say) perfectly colored for the vintage look. On top of the dial plate, is a “spray” of little brownish black specs further aiding the aged look and giving the watch a more legitimate vintage feel. Furthermore, this spray ensures that no two watches are identical. In fact, I truly believe, if you showed me a decent conditioned vintage dial of the RAF watch, and the Heritage Military Watch, I would have a hard time determining which is which without a close-up examination. 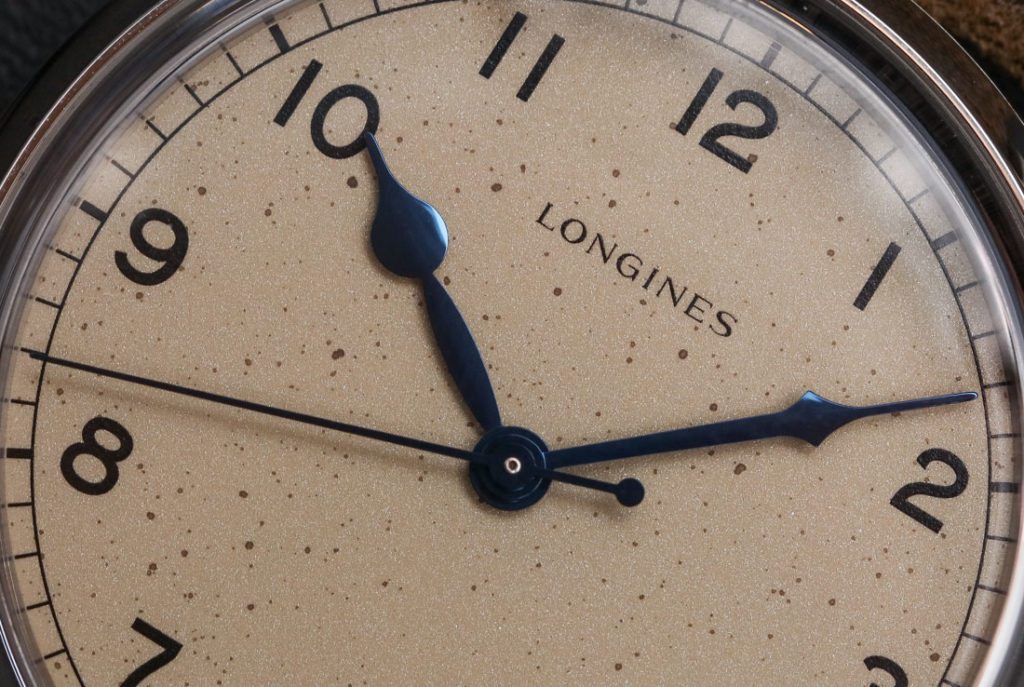 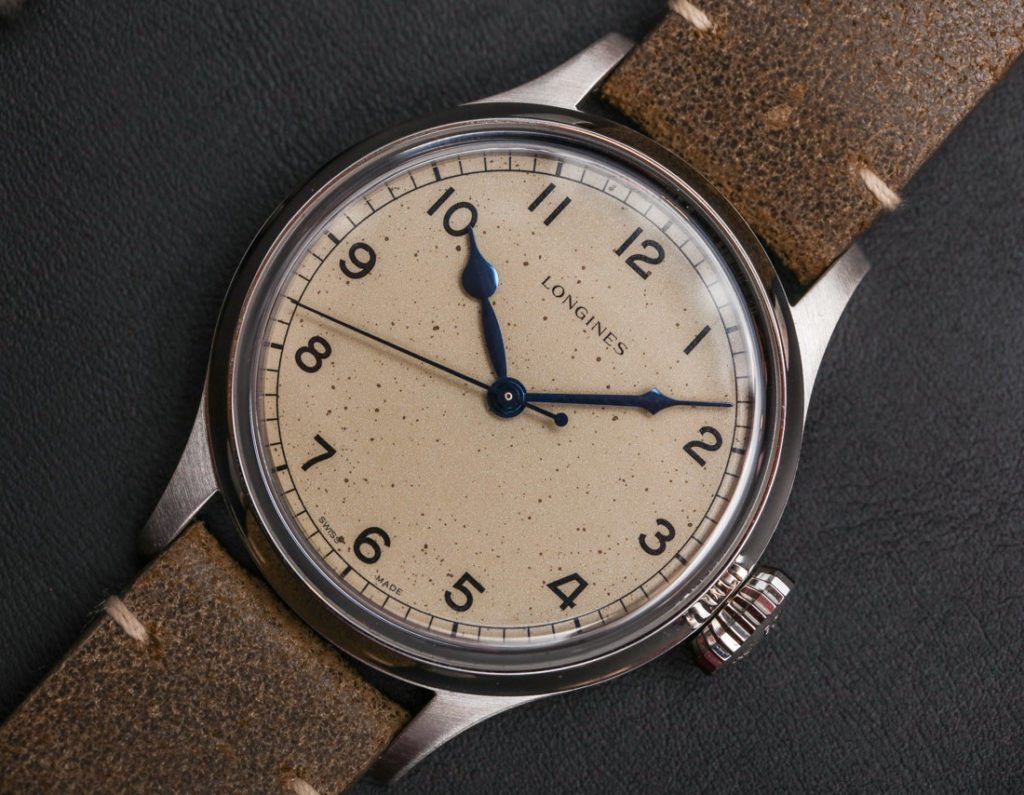 The uniquely shaped handset is blued, and rounded – a nod to handsets of the ’40s, and even feature a barely aged hue. Again, further adding to the vintage charm. I need to commend Longines on two things for the handset: one, the length and shape are damn near perfect for its utilitarian nature – right down to the seconds hand reaching the railroad minute track exactly where it should, and two, non-modernization of the shape. Many brands tend to attempt to slim down vintage-style handsets and unfortunately, produce an out-of-place aesthetic with a handset that doesn’t exactly look vintage but doesn’t look modern either, and Longines avoided that on the Heritage Military Watch.

There is no “Automatic” on the dial, a usual fetish for the brand and besides “Longines” and a small “Swiss Made” at the bottom of the dial, there isn’t any other text displayed – front or back. Additionally, and shockingly, this watch features NO date leaving minimal interruptions in the dial. Overall, I need to commend Longines on the dial design here. I’m not typically a fan of faking it but come to realize I’m actually not a fan of “faking it poorly” and if you’re going to do a faux patina dial, this model is certainly something to look towards on how to accomplish it without looking kitschy. 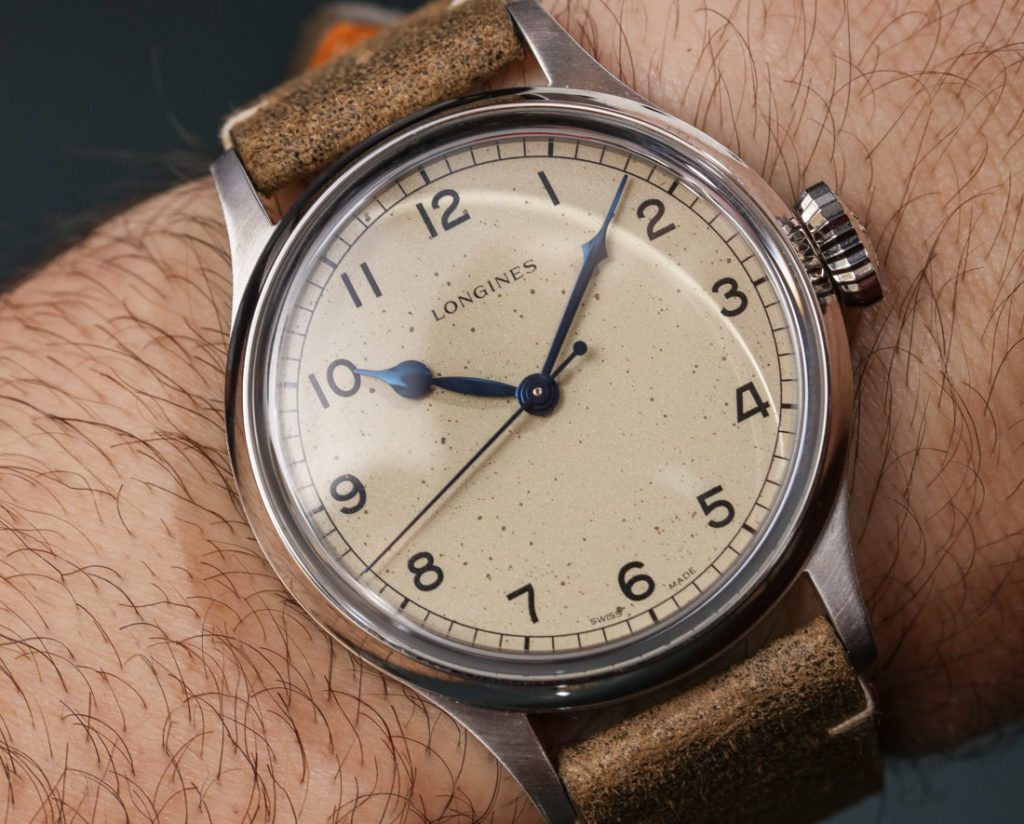 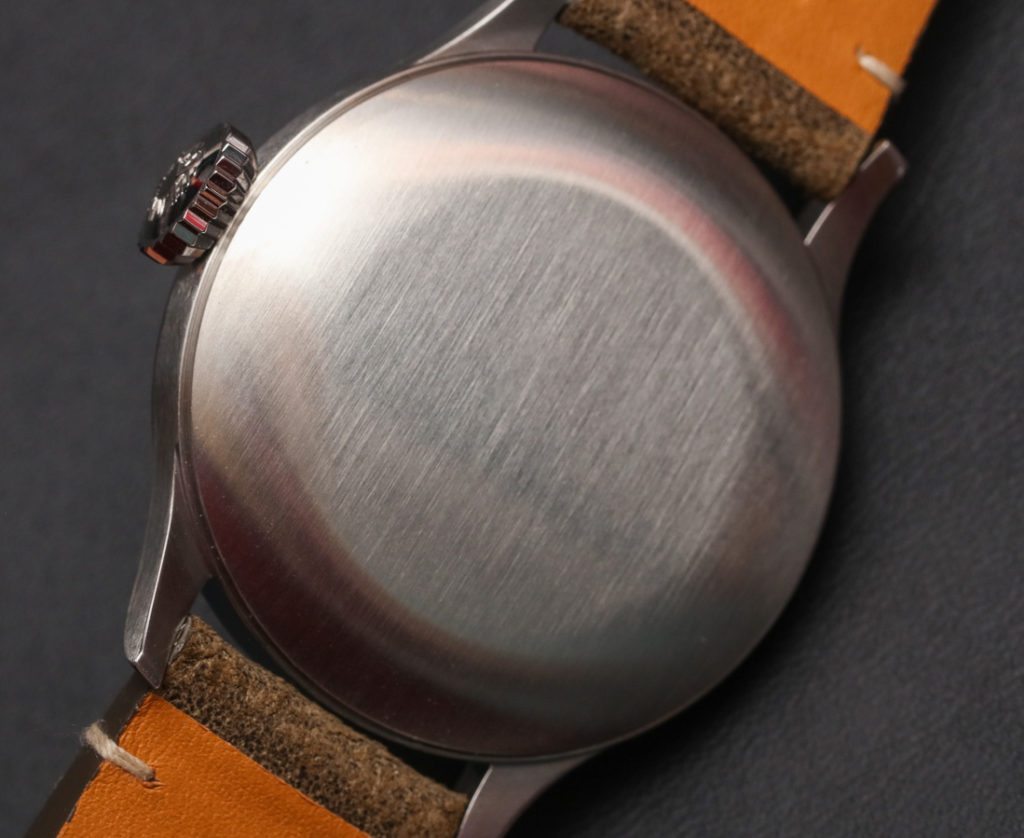 While the rest of the watch calls on some vintage vibes, the guts are very much a modern upgrade. Instead of the hand-wound movement of the 1940s era, the L619/888 Automatic movement gives the watch its heartbeat. It’s a movement based on the ETA A31, beats at 3.5Hz, and features a generous 64-hour power reserve. The time-only movement isn’t visible through the case back, as the watch features a steel, rounded caseback – a nod to the watch it’s emulating and realistically (in my opinion) the only viable option to keep this watch uniform in its aesthetic. 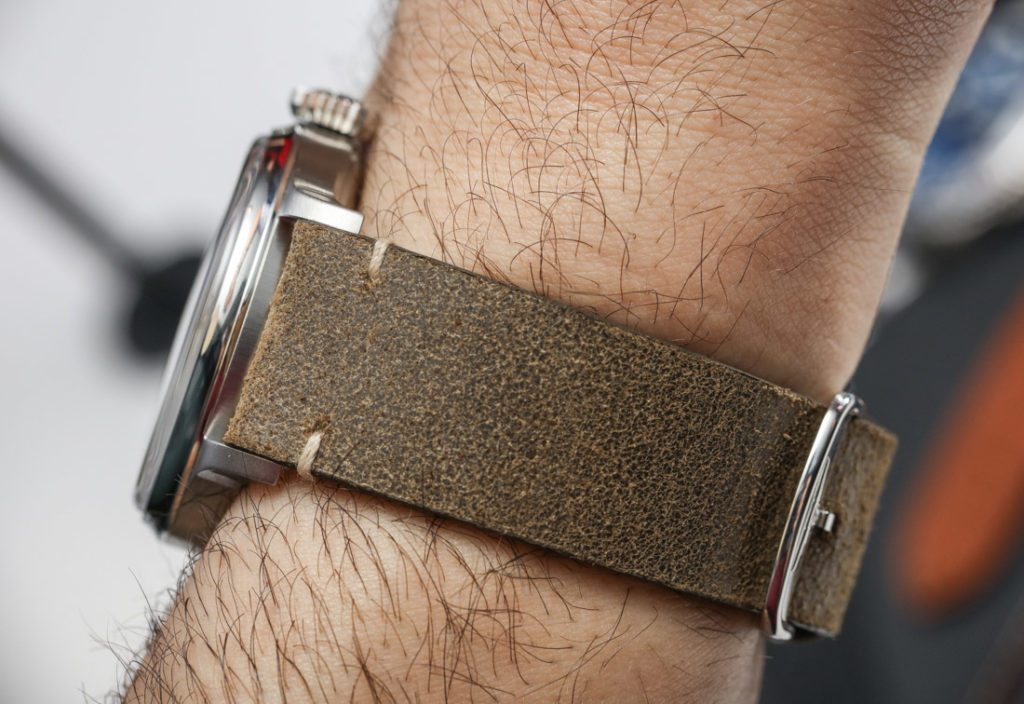 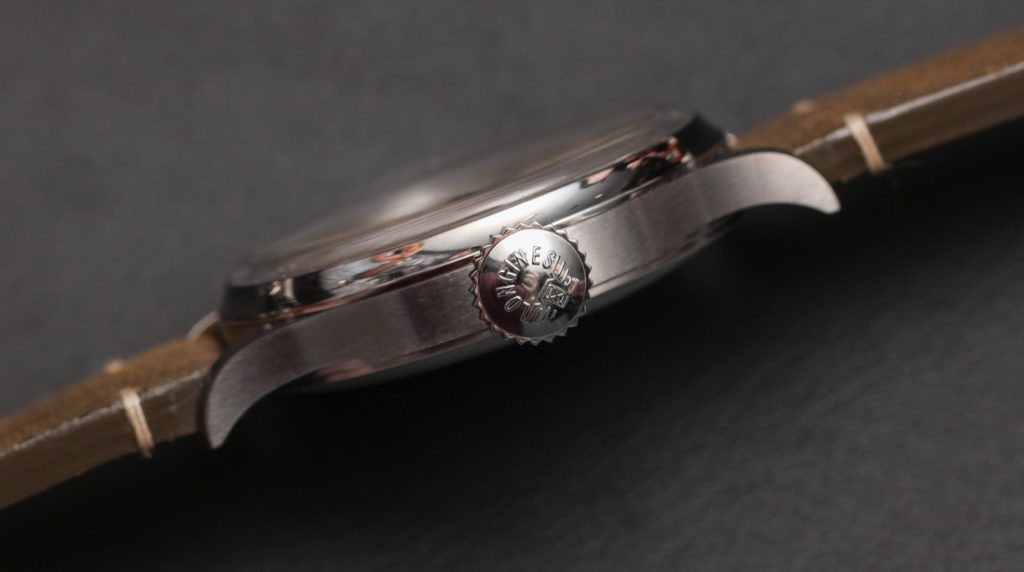 Strapping the watch to the wrist is an aged calfskin leather strap. I must say, it fits the watch extraordinarily well. As a strap junky, I tend to be critical of these types of finishings, and I can’t be here. As for the leather itself, it may look irritating on the top, but is superbly comfortable. It features a full-length strip for the belly and doesn’t utilize a turn-over method (as is often found in cheaper straps) reducing a further point for possible discomfort. My one gripe is the sealant on the edge could be a bit more refined and match a little better. While I understand that’s a little more difficult to do than people realize, it takes away a little bit of the aged look with its crude application. The thin pin buckle features Longines’ wing logo and furthers the simplicity of the look while nodding to the pilot’s influence. 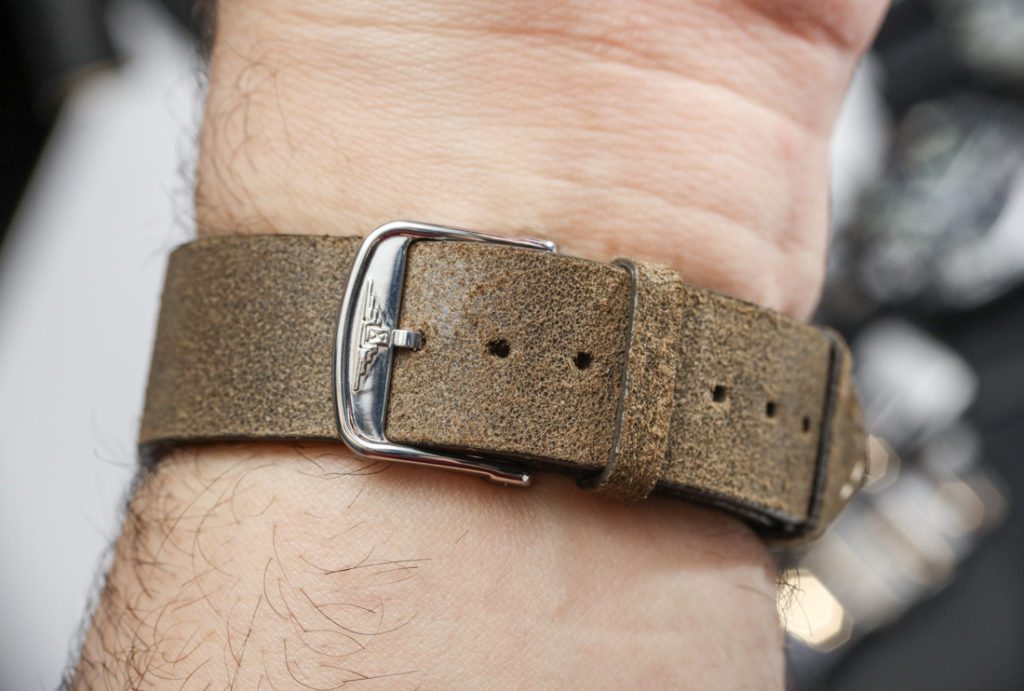 I am not a vintage watch person, but I would totally wear this piece regularly. The modest sizing, influence, and attention to detail on the Patina leave little to be desired in way of effort – that is to say, Longines didn’t phone it in here, and that’s rare to see in a Faux-Patina-ed timepiece in this price-point. This is one of the few Pseudo-Vintage watches that feels honest. I don’t mind the “fake” aging paired with the modern guts. Overall, if you’re in the market for an aged piece that isn’t from the ’50s, and won’t require a service every other weekend, this may be the piece for you. Price for the Longines Heritage Military Watch is $2,150. Learn more at longines.com