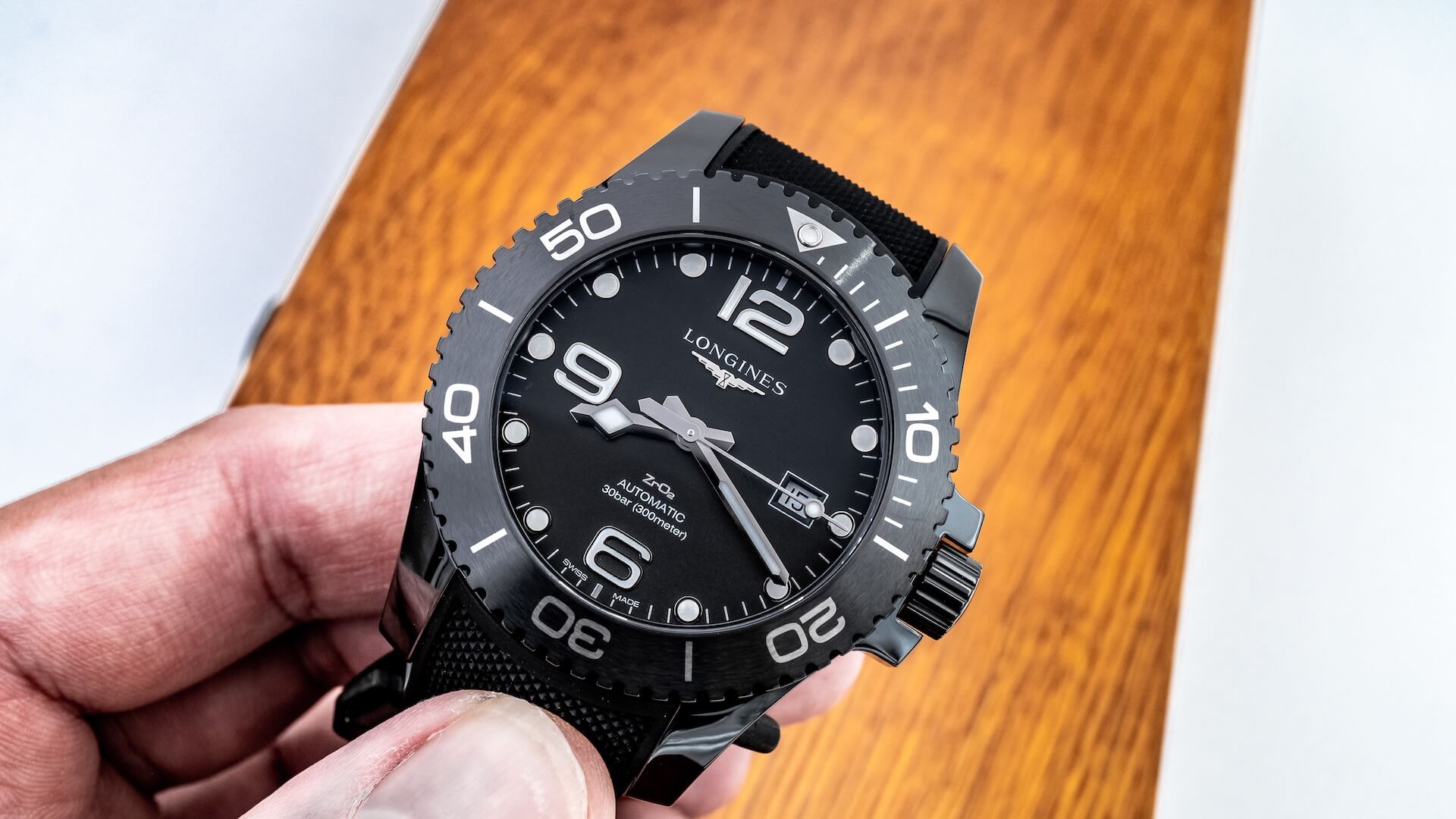 While they’ve grown in popularity and aren’t quite as rare as they once were, ceramic watches are still uncommon and pretty costly, all things considered. I first handled this Longines HydroConquest All-Black Ceramic watch back in 2019 at Couture in Las Vegas, and I felt the execution was largely satisfying and worthy of a brand that has access to the Swatch Group’s resources. Over a year out since its release, it still gives off that feeling of stealthy luxury as soon as I put it on the wrist. It’s hard not to draw comparisons to the Omega Seamaster 300M in black ceramic/titanium, as both are aesthetically similar offerings from the Swatch Group, albeit at two very different price points, with the Longines being something like 60% less than the $8,100 Omega. 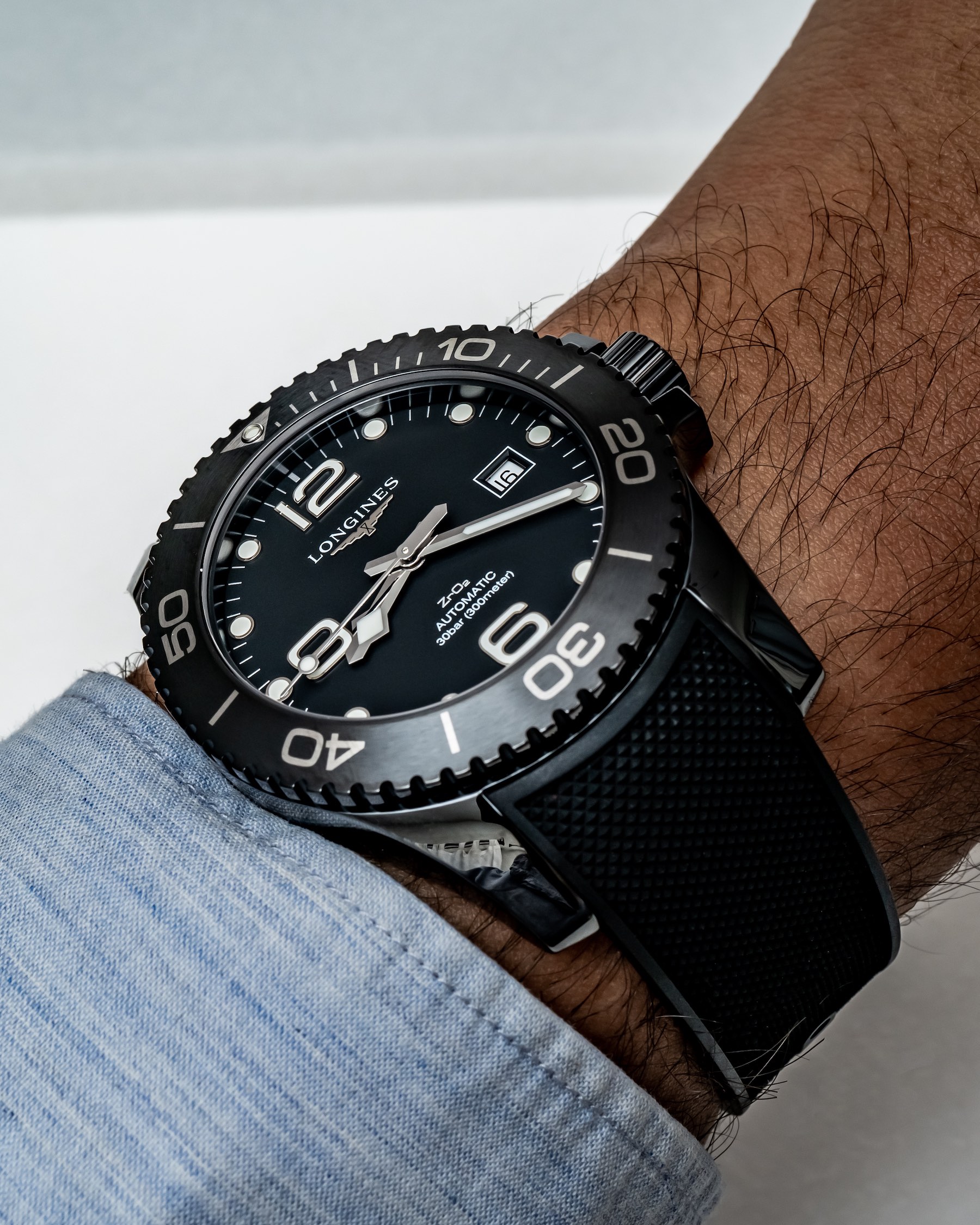 Shaped from a solid block of ceramic, the HydroConquest is very lightweight due to the material, as well as the textured rubber strap — not as disarming as titanium, but significantly lighter on the wrist than the 43mm-wide case would suggest. While largely identical to the 43mm steel case model, the ceramic version does have different have blockier crown guards and a bigger crown. Both of these changes are positive, in my opinion. The lugs are on the longer side, with the case around a 51.5mm lug-to-lug, which is right at the upper end of what I’d ordinarily wear. 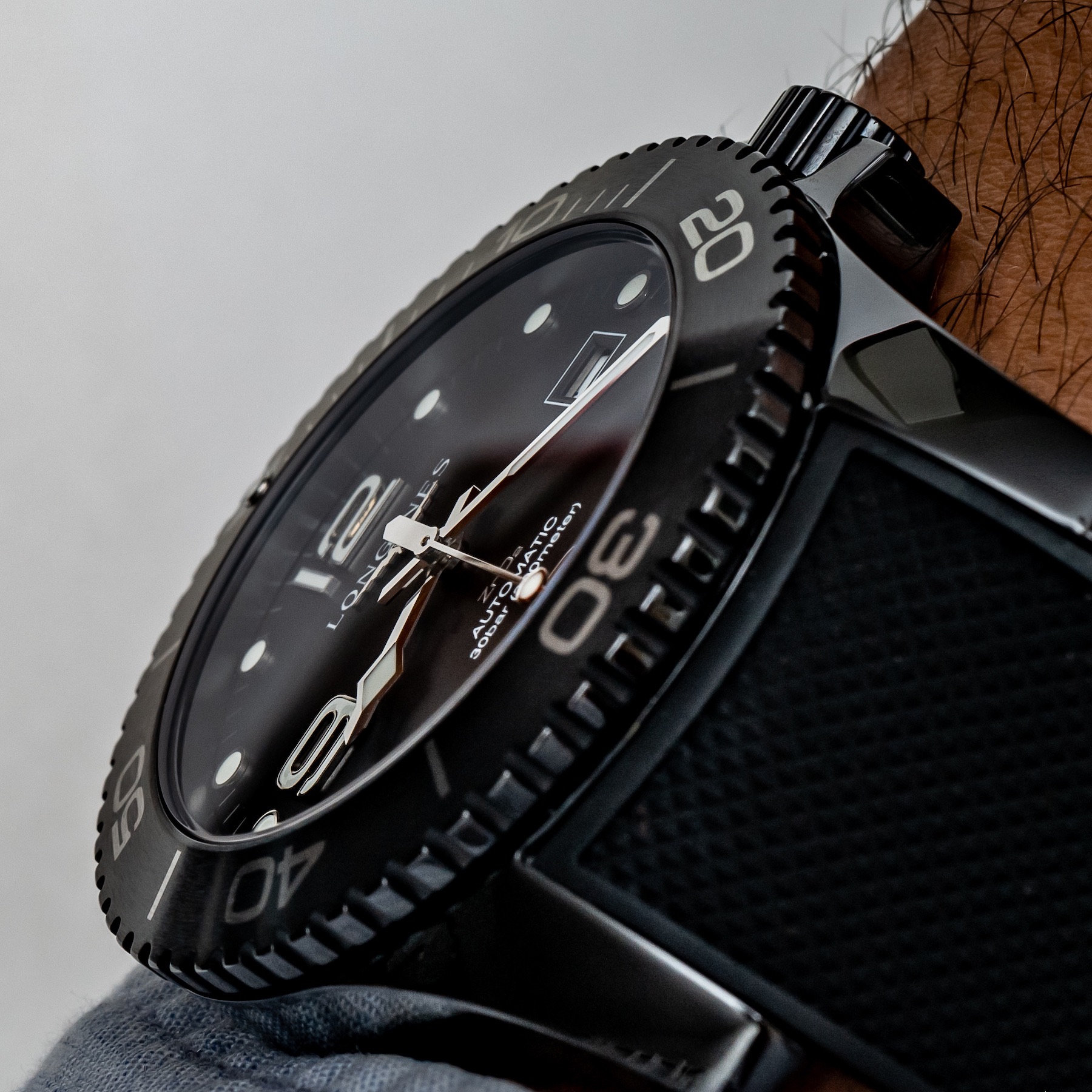 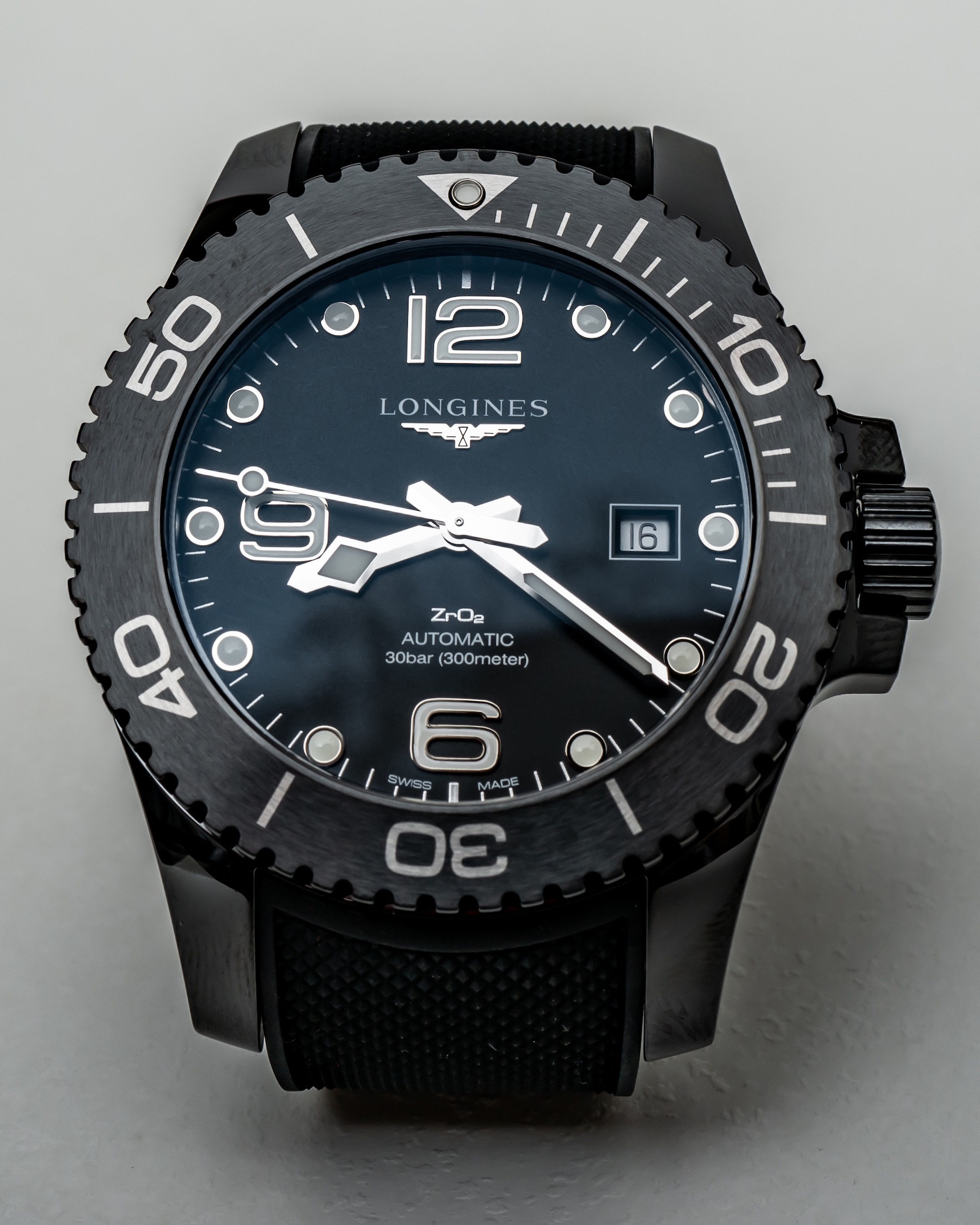 Even with glare, legibility is great

Everything about the case is pretty refined, with the glossiness mellowed out by the brushed uni-directional bezel (which has a very satisfying click) and matte dial. Thankfully, Longines didn’t go the totally blacked-out route and kept a monochromatic black and white dial that is highly legible from various angles, as well as with direct glare, thanks to healthy double-sided AR coating. The lumed hour and minute hands are nice and large, with a proper length that contextually fits in with the dial. The also-lumed lollipop seconds hand is a nice touch, as well. 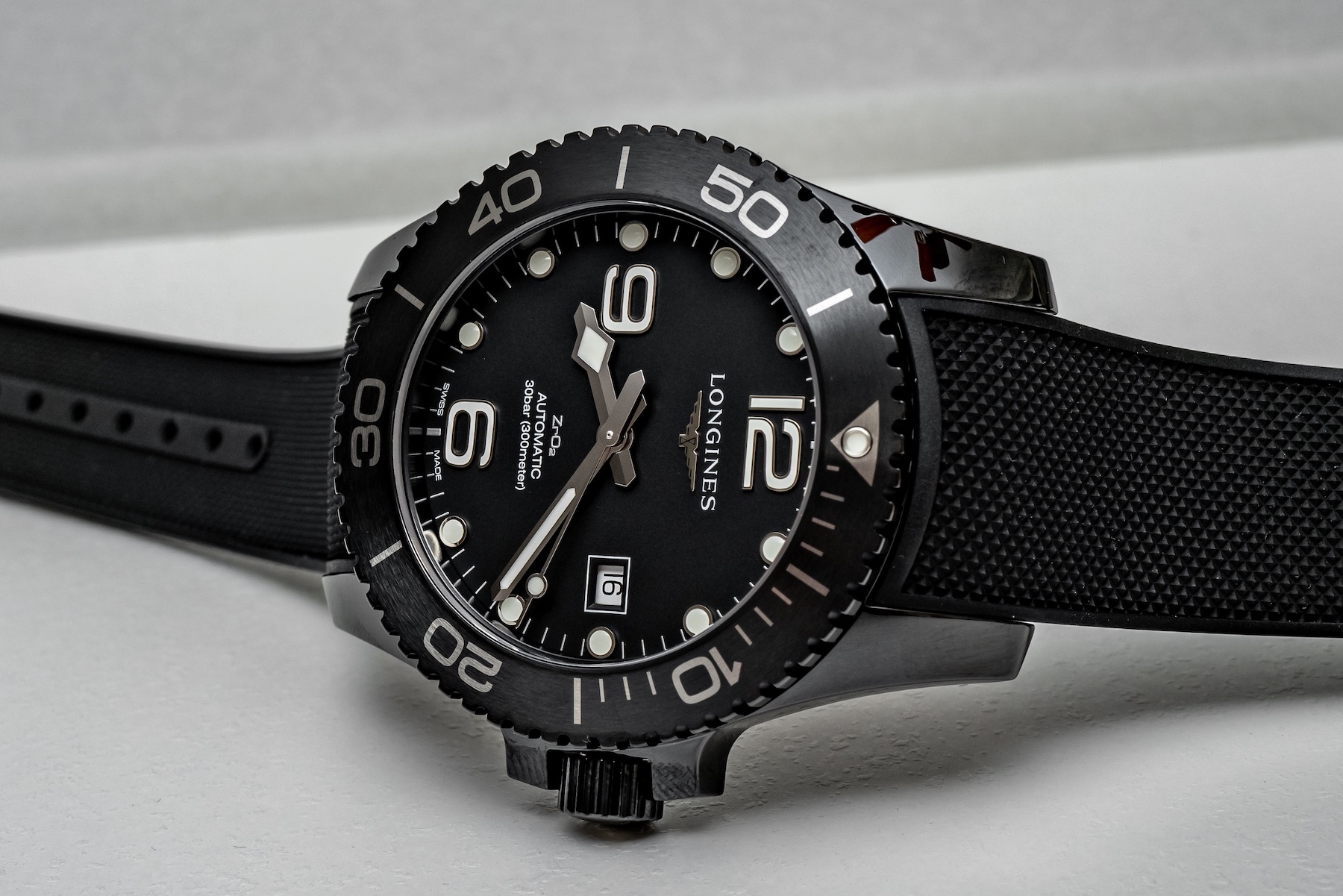 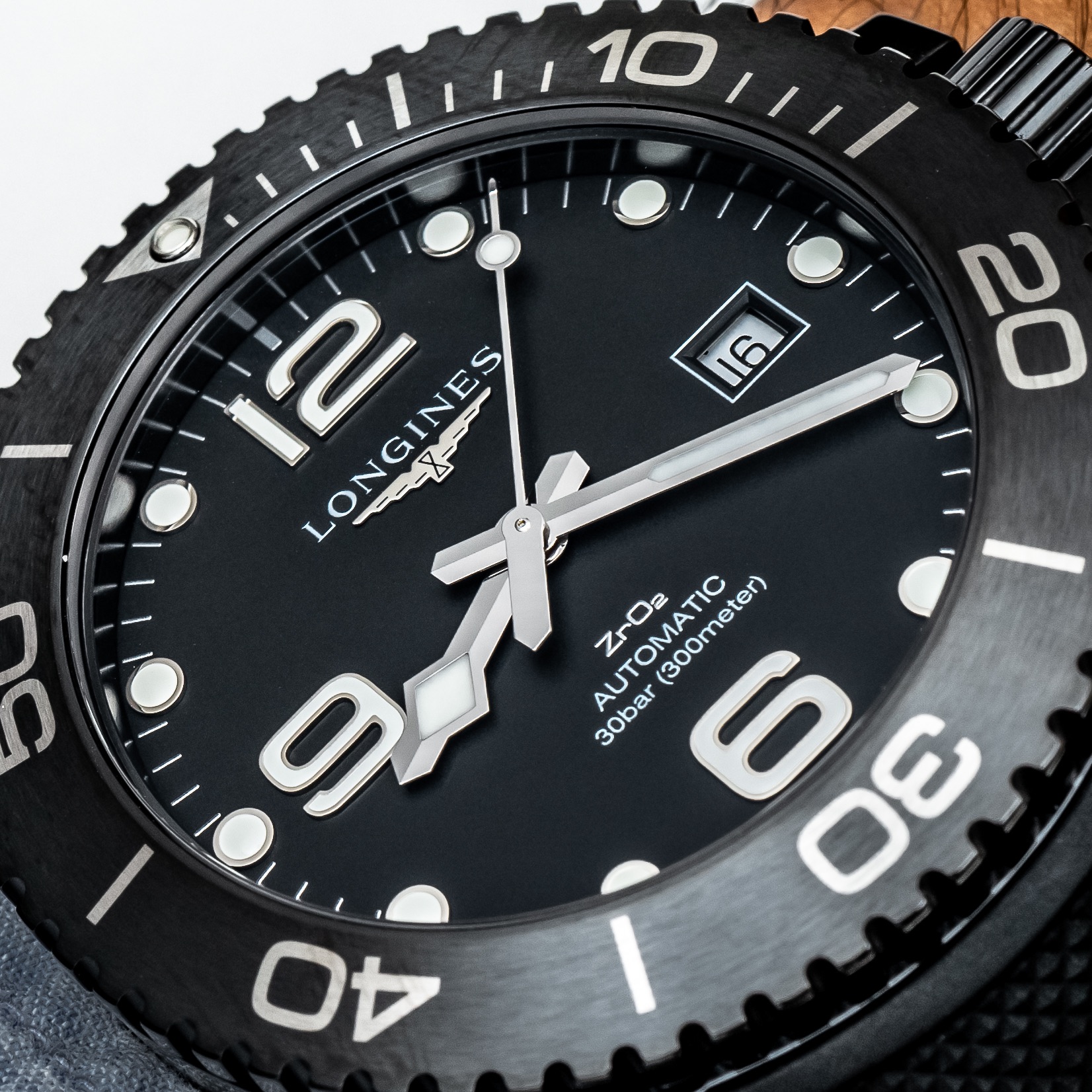 If there’s one thing I could change on the dial, I would probably make the 12, 6, and 9 hour markers a little bit smaller, as they just appear too outsized for my taste. There is no variant without a date window, but in that hypothetical, I suppose you’d have to get rid of the 9 altogether since a 3 there would just be a lot. 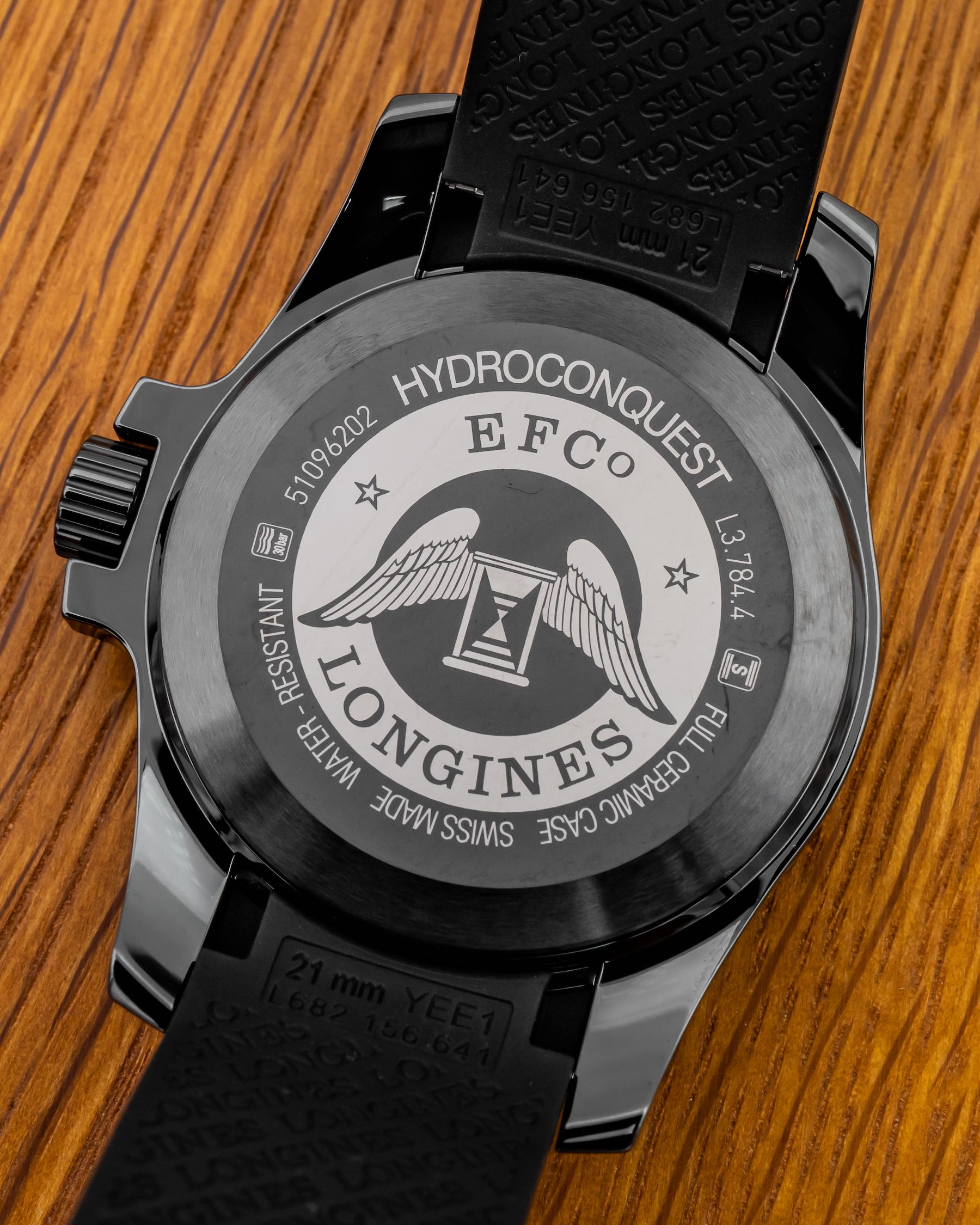 The enclosed ceramic caseback has the Longines wing logo and some basic information about the watch. I am more and more coming around to enclosed casebacks unless there is really something to show off in the movement — otherwise it’s just flashy filler prettied up with a custom rotor and/or mediocre Geneva stripes.

Anyway, since this is a Swatch Group brand, the movement here is the Caliber L888, a modified ETA-2892 that trades a little bit off the frequency for the sake of power reserve. The L888 operates at 25,200 vph but bumps the 50-something hour power reserve of the ETA up to 65 hours. 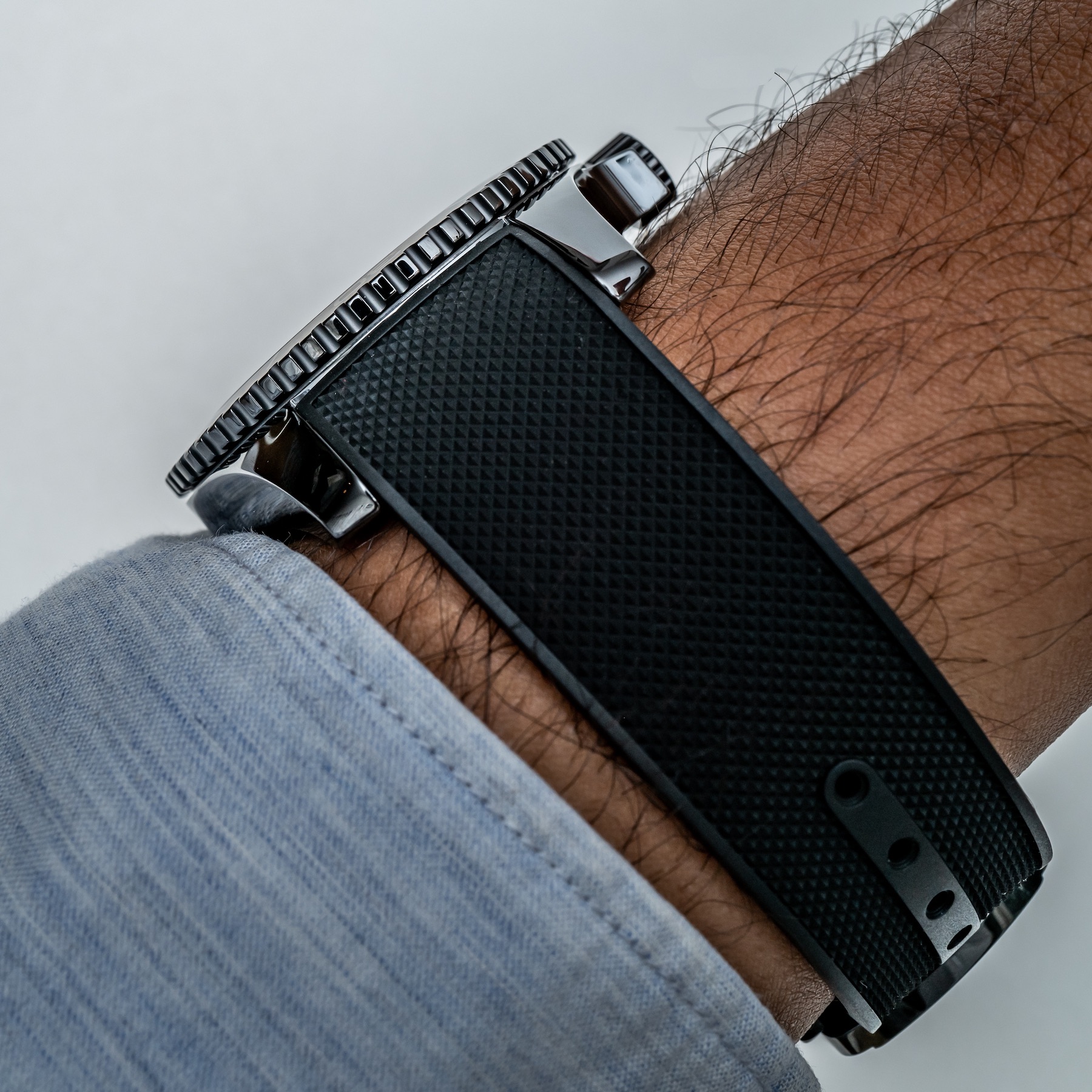 I have to say that I’m a big fan of textured rubber straps, and the one used here is just about as comfortable and well done as that on my Omega Seamaster Planet Ocean. It forms to the wrist comfortably, and sizing is really easy to adjust. The double-folding clasp is also done in ceramic, which is another detail that helps make this such a cohesive piece. 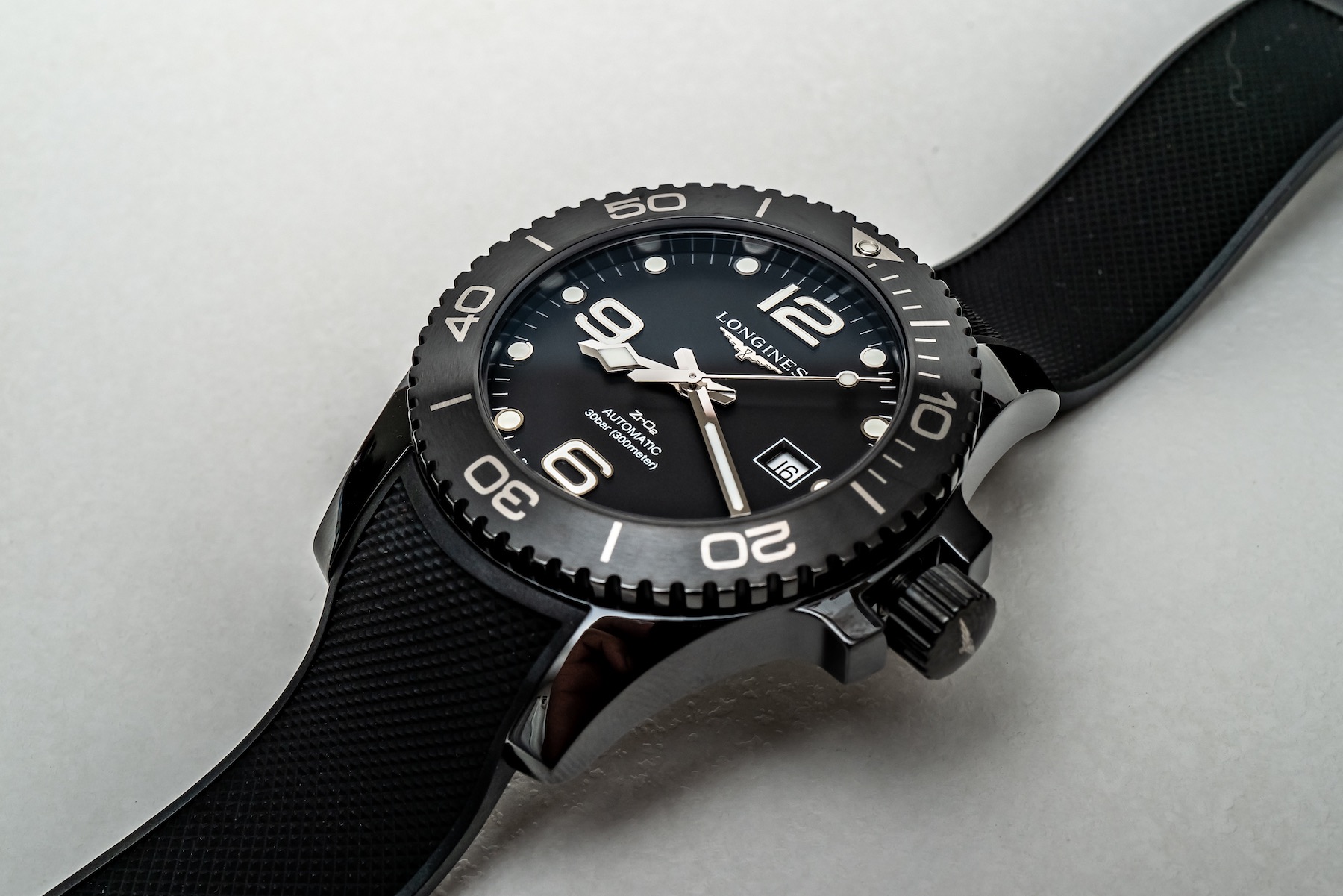 The Longines HydroConquest all-black ceramic is a whole lot of watch for the money. It is just about the same price as a steel Tudor Black Bay. Modern versus vintage diver, brand perception, case material, and movement are the major points of debate between the two, and those can be argued all day. Having handled the Longines in the metal, er, inorganic compound, I know it’s the one I’d pick. An all-around impressive watch that stands out from the competition, the Longines HydroConquest all-black ceramic is priced at $3,725 (see e-commerce page here). You can learn more at longines.com.