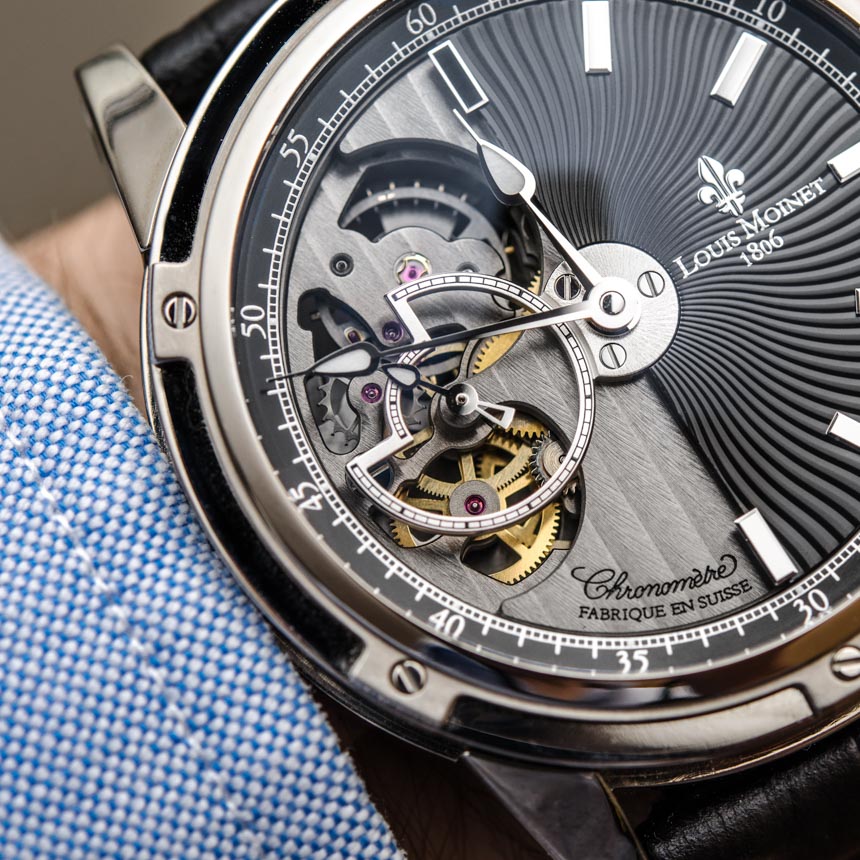 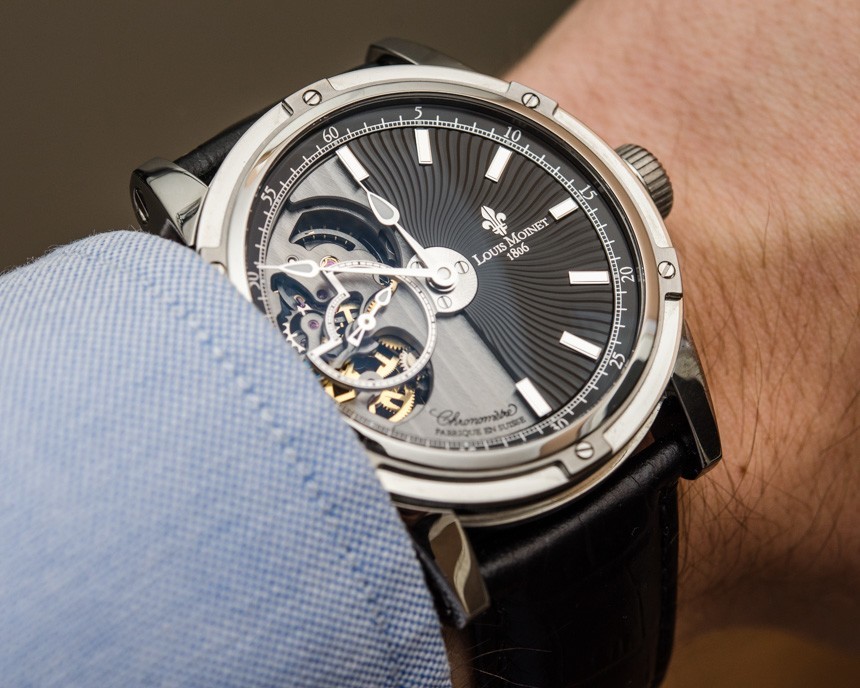 The Louis Moinet Mecanograph does away with most restrictions that seem to have applied to dress watches: its case is wide and thick, the half-faced dial is bold and unique, and the first impression it makes is a powerful one that lacks subtlety. Nevertheless, thanks to its elaborate details, mono-chromatic looks, and beautiful finishing, not only does it not look awkward, but rather it works wonderfully with more formal attire. Coming up now is a review of this half-faced dress watch and its more interesting details. 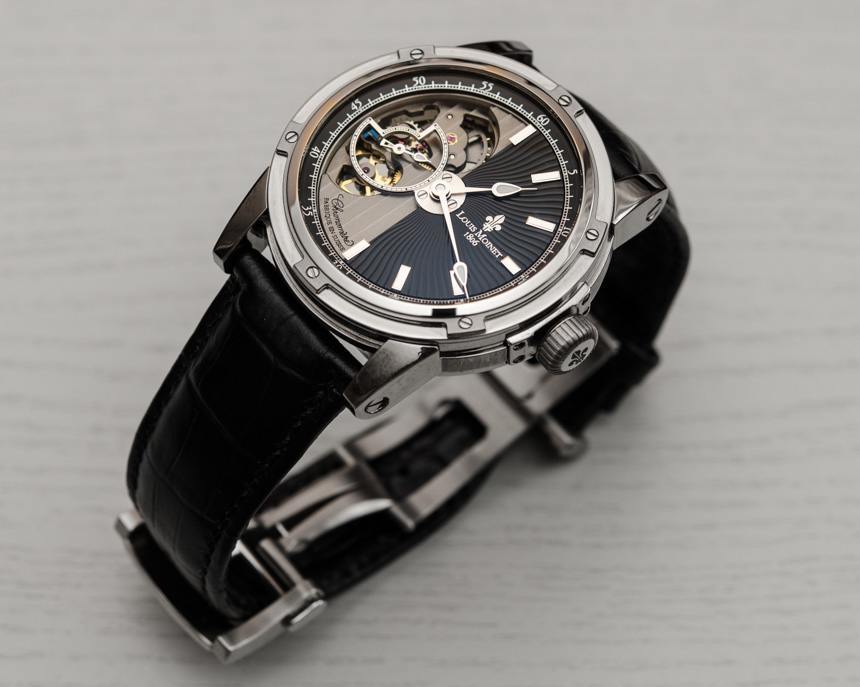 First, a bit of history: 2014 marked the 10th anniversary of the establishment of Swiss high-end watch brand Louis Moinet’s workshops, but the 208th anniversary of the Louis Moinet watchmaking heritage. The new millennia brought upon us a booming luxury watch industry, something many investors, inventors, and watchmakers venture to try and take a slice of. There are those who name their brand after themselves, while others look for an interesting, but lost heritage in the extensive past of horology. Louis Moinet clearly is the latter, but let us not forget that so was Breguet, until as recently as 1999, when Swatch Group president Nicolas G. Hayek purchased the rights to it. 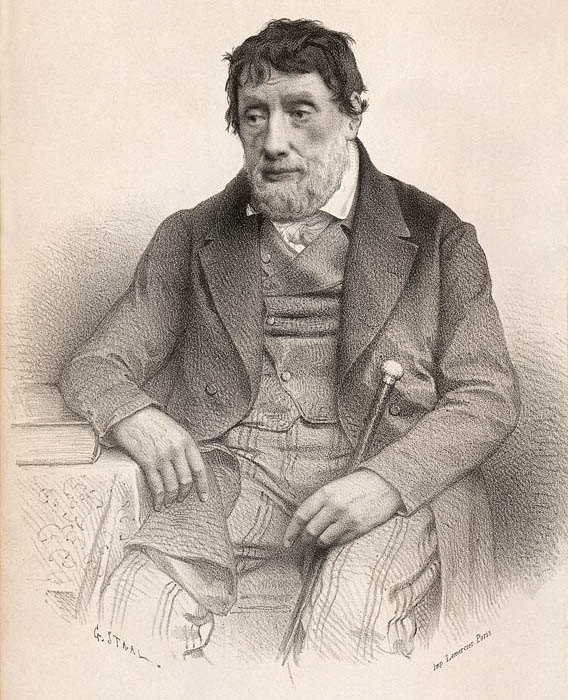 Louis Moinet was a watchmaker who worked during the late 1700s to mid 1800s, as a contemporary of other horological giants like Breguet, Perrelet, and Rieussec. Today, Moinet is considered to be the inventor of the chronograph mechanism – rewriting history, as it was Nicolas Rieussec who was believed to be the inventor of the first stopwatch, with Montblanc paying a tribute to the achievement (hands-on here). Anyhow, what we can be sure of is that Louis Moinet was an incredibly talented and highly successful watchmaker of his time – a heritage definitely worthy of extending. 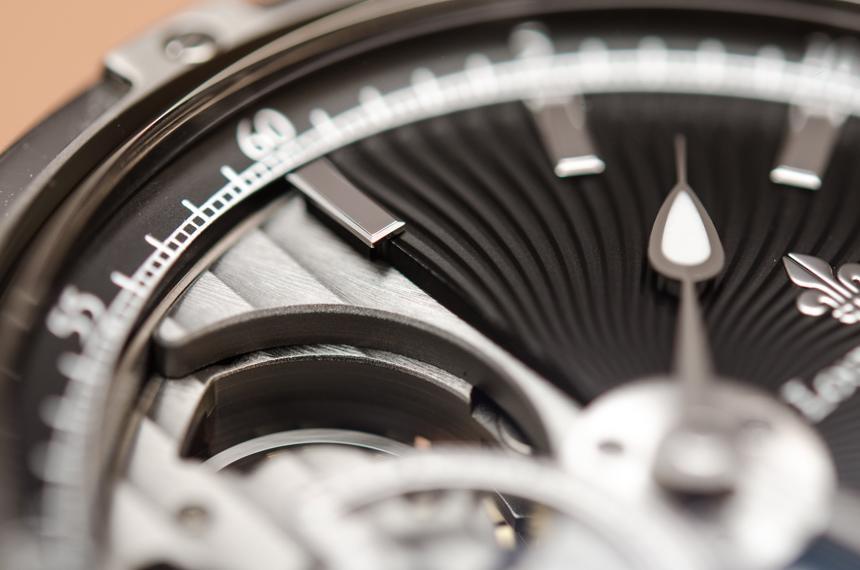 The Louis Moinet Mecanograph can in many ways be considered the “entry-level” piece in the brand’s present line-up although, generally speaking, there is nothing entry-level-ish about it at all. The first detail I would like to discuss is the dial itself, as in many ways, that is the defining feature of the Louis Moinet Mecanograph – as well as many other pieces offered by the brand, as they like to experiment with dials cut up into well-defined, contrasting segments.

The right hand side of the dial features an intricate Côte du Jura wave pattern, with the waves starting out from the very center of the dial and running towards the periphery with deep, well-defined curves which add a more sensible and soothing design element to the otherwise rather serious-looking face of the watch. 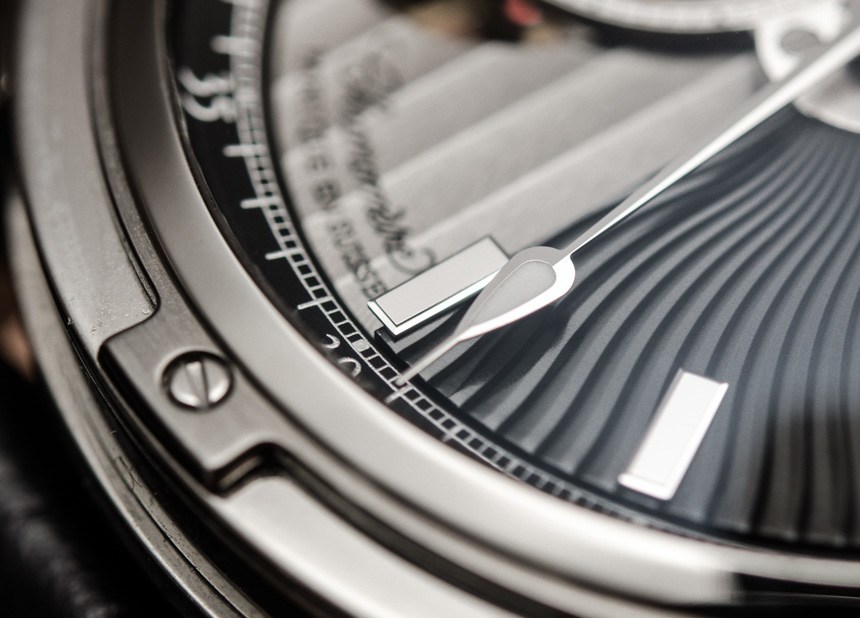 One genuinely cool detail – that is not obvious at first sight but is difficult to “unsee” once noticed – is how the 6 and 12 hour indices appear to be hanging over the edge of the black dial. Placed perfectly in the center, the left half of the intricately polished indices appear to be overhanging onto the cut out portion of the dial. It is only when inspected with a loupe from a very steep angle that the little black supporting piece holding the left half becomes visible – from any other angle the illusion remains. The cumulative effect of such minuscule details is what should play a key role in setting a high-end timepiece and a more affordable offering apart. 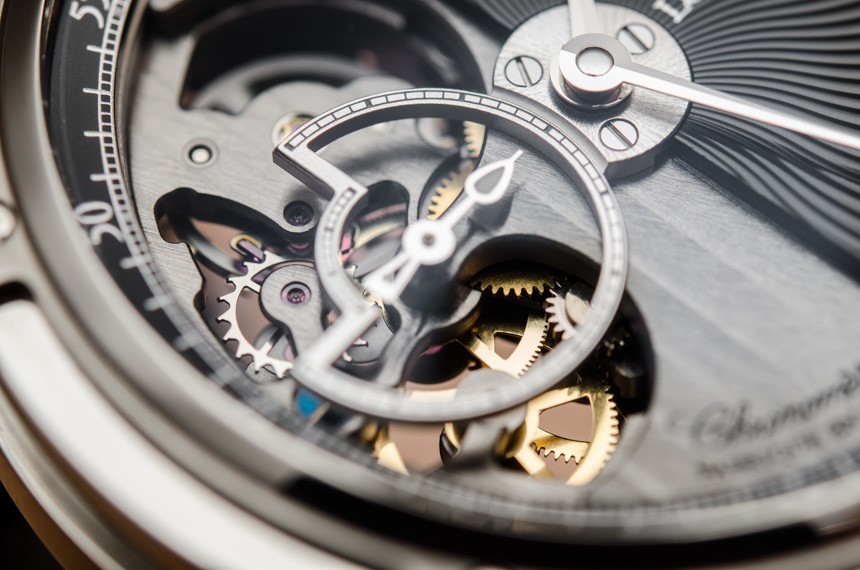 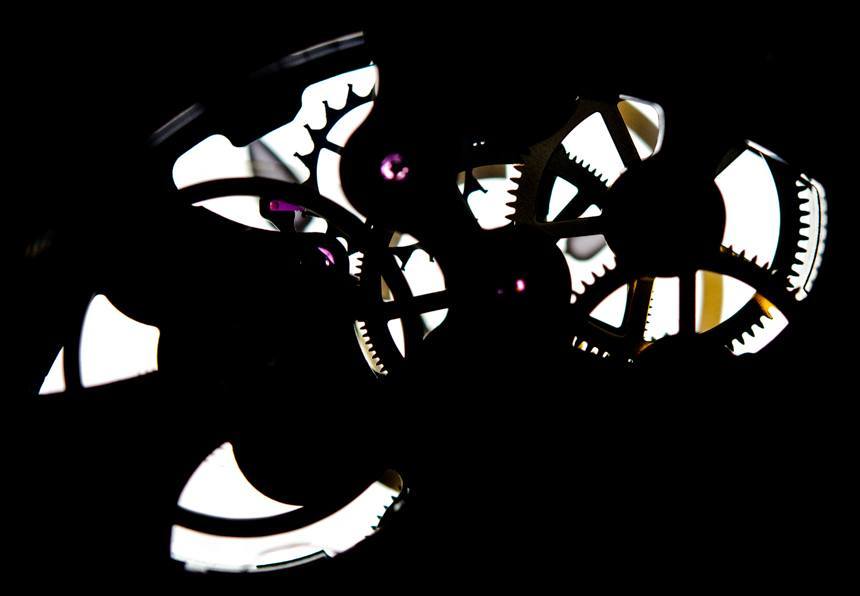 The left hand side appears to be from another watch entirely, as the black dial has been literally cut in half – with just a small frame for the seconds sub-dial remaining – thus exposing the dial-side plate of the movement. The plate has been skeletonized between the 8 and 11 hour positions, providing a unique look into the bowels of the movement. The gold-plated third and fourth wheels, as well as the escape wheel are easy to identify, with the balance wheel being placed a bit further up, secured by a bridge from the top. 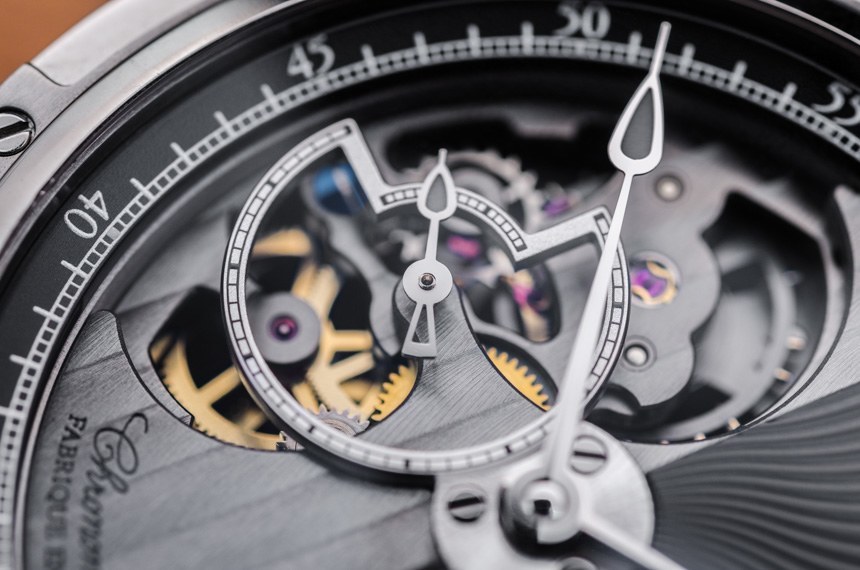 This three-dimensional view is not just cool, but I believe is also very interesting to any watch enthusiast who is fascinated by the inner workings of a mechanical movement. The movement’s plates display a subtle Côtes de Genève striping decoration, not as noticeable as seen on the backs of some other calibers – but that, in this case, is a good thing, as it helps the wave pattern and the skeletonization stand out more, and there really is no need for a third attraction on the dial. 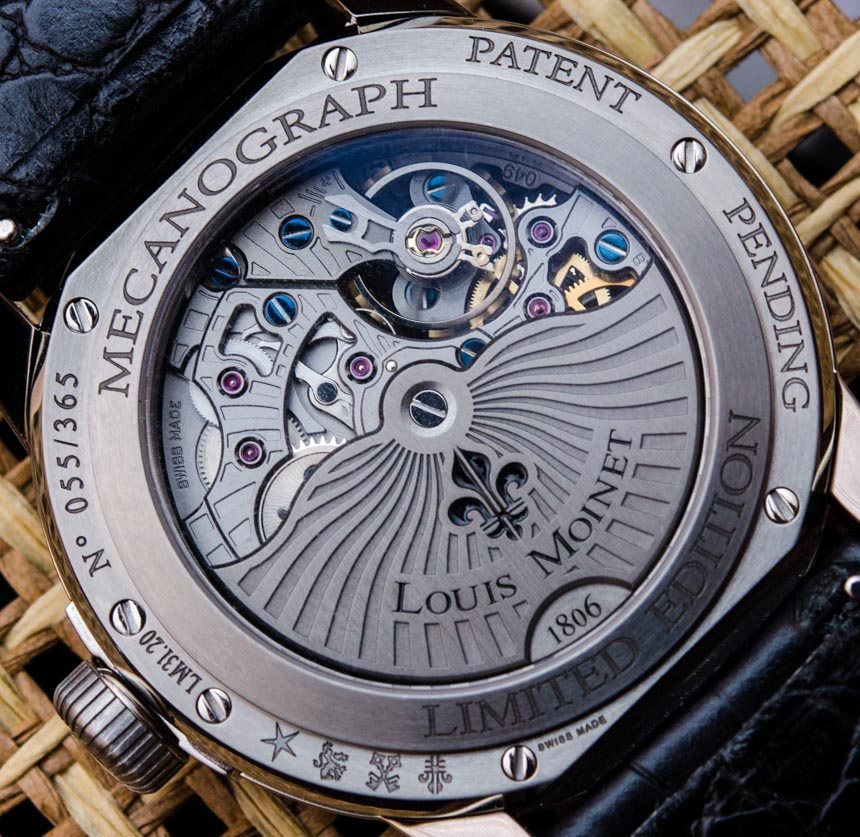 The skeletonization looks more industrial than hand-finished, even when observed with the bare eye – a design choice that becomes easier to understand once we look at the case back. The movement in the Louis Moinet Mecanograph is COSC chronometer certified that is exclusive to the brand and is manufactured by Concepto – a Swiss high-end movement maker, whose logo can actually be found in a hidden corner of the LM31.02 caliber. The movement is covered in what appears to be a matte anthracite colored coating, a diversion from the shiny rhodium plated calibers we have grown used to seeing in most luxury watches. 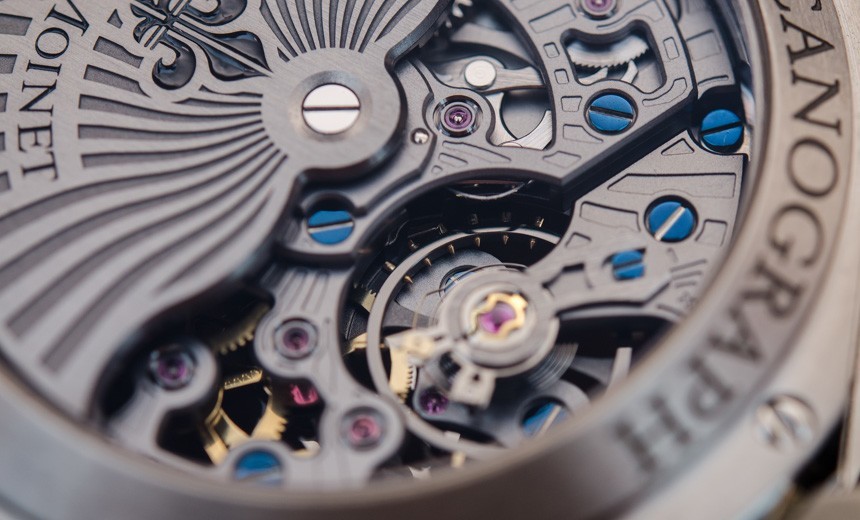 The reason why this makes sense is that this way, the movement’s color now matches the Grade 5 titanium case just about perfectly – leading one to believe that the plates have been crafted from titanium as well, although that is not the case. The price that is to be paid for such harmony between caliber and case is that this anthracite finish, thanks to its matte surface, does not shine as brightly and does not display as many shiny bevels and plates as traditional movements do. The modern aesthetic is further emphasized by the angular, recessed areas on the plates which serve to replace the Geneva striping and perlage we would otherwise see. 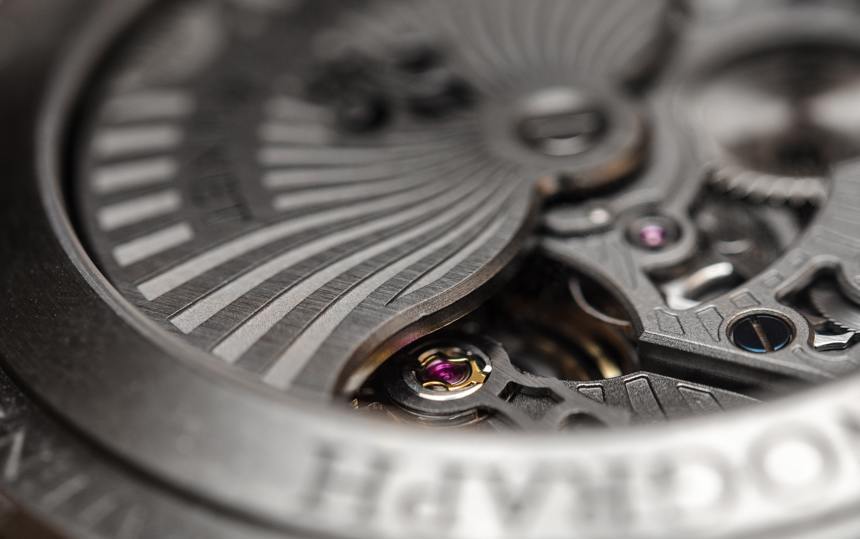 Contrasting strongly against the patterns seen on the bridges underneath it, but matching the black dial’s decoration perfectly is the rotor’s wave pattern, which – although executed in a different, more flat looking way – is the same Côte du Jura pattern displayed on the front of the watch. I consider this to be a welcome detail that implies thoughtful design, as the movement and the dial are linked in their design. 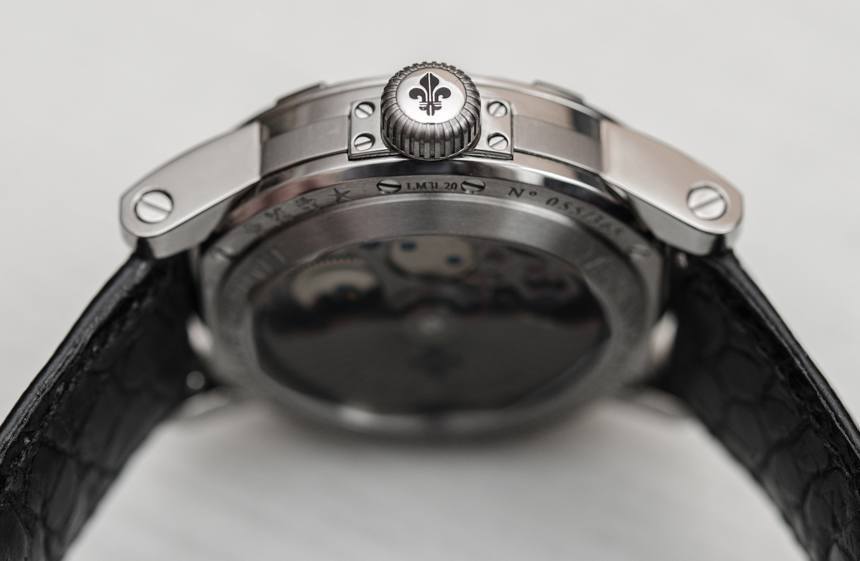 We have mentioned the unusual match between the movement’s and the case’s hue, so let’s see some of the more intricate details of the latter. The titanium case is expectedly light, making the rather large and thick watch wear more comfortably than it would in steel or gold. The polishing on the sides and lugs is beautifully executed, giving a deep shine to these surfaces. Both sides have a brushed stripe that runs between, but does not extend to the slightly curved lugs. The lugs feature large screws in their sides, which may be misleading as the straps can be removed with spring loaded bars (although that is a tool-free process, as a little notch exposed on the inside of the strap lets one remove the strap easily). The large screws set in the lugs then serve no function, and while they do further extend the masculine appearance of the Mecanograph, I do wonder how these sleek lugs would appear with solid, polished sides. 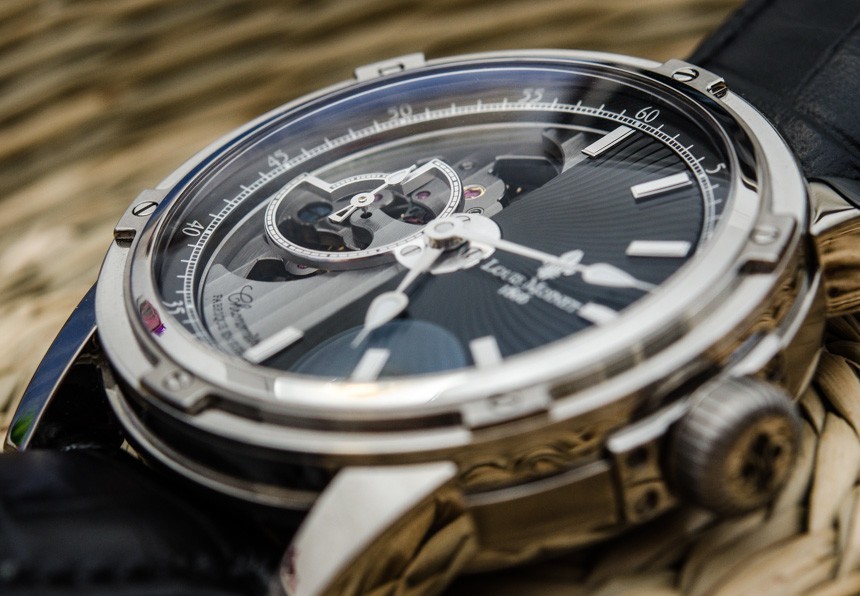 The case back boldly states “Patent Pending,” and with that it refers to the “interchangeable crown tube system.” Also referred to as a patented crown guard, this small section around the crown can be removed thanks to the four screws around it. The crown itself is, although large, remarkably comfortable thanks to its curved edges. If and when it contacted my wrist I never felt it digging or carving into it like so many other, large crowns do – even on similarly priced watches. 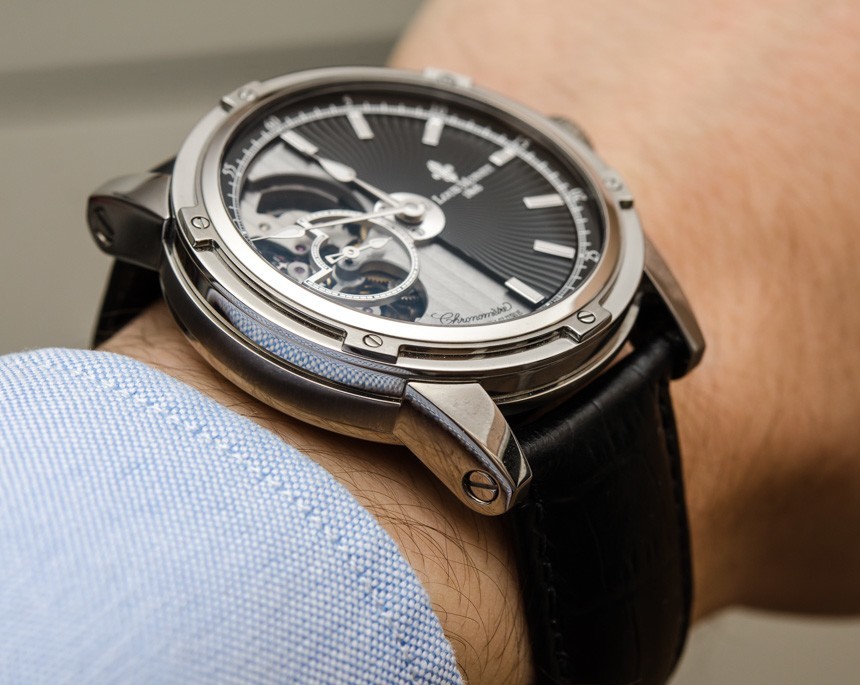 The 43.50 millimeter wide and 15.60 millimeter thick case sits a bit high on the wrist, especially if we consider that it does not have a complicated chronograph or date movement inside – the movement provides the time only. The bezel, secured by its six small – and yes, misaligned – screws features six recessed tiers between the screws. While it lends the round face a more elegant and masculine appearance, lint and dirt quickly gather at the angular parts of these recessed segments and is difficult to remove or keep them clean. A minor complaint, but with a case as nicely finished as this, it is but a bit bothering to see even a small amount of dirt anywhere. 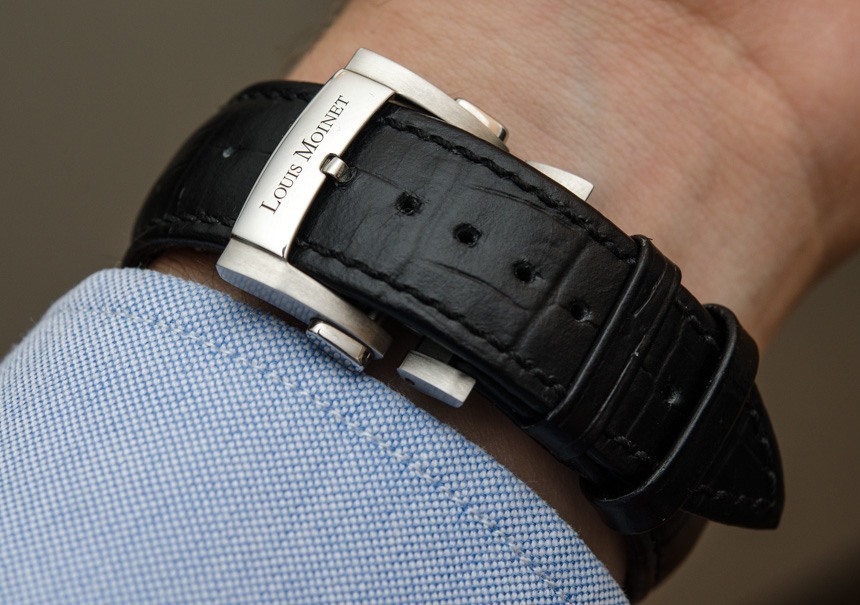 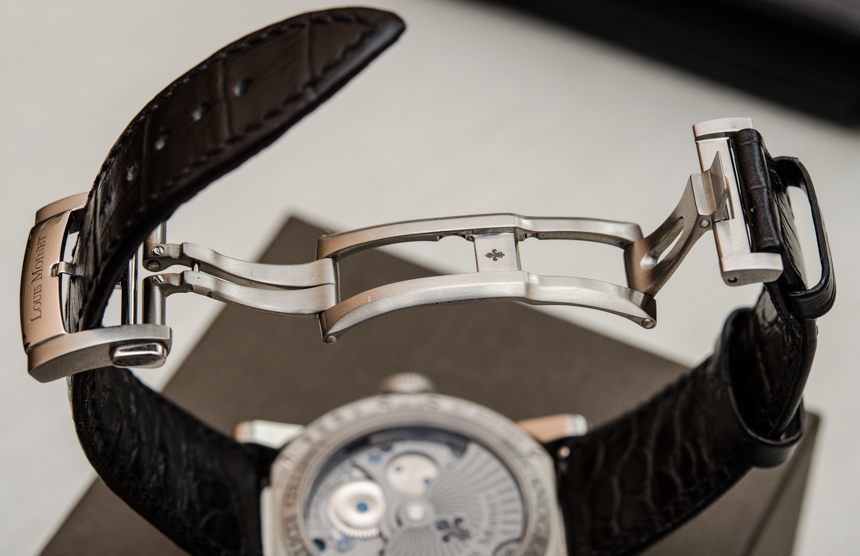 The deployant clasp works as an extension of the case – although it is made from steel and not titanium, the clasp is nicely finished with rounded edges on all components, preventing them from cutting into the inside of the wrist as some other folding clasps do. For some legal (CITES) reasons, the strap that came with the review piece is not genuine alligator, but instead a padded and rather stiff leather strap that I must say did not wear very comfortably on my small, 6.75″ wrist. Stiffness in a strap arguably is more important when the straps are worn in their tightest settings as they have to flex a lot more at the padded part near the lugs to wrap the wrist better. So while I cannot comment on the comfort and quality of the original straps, I am sure they will do a much better job than these plan-B straps. 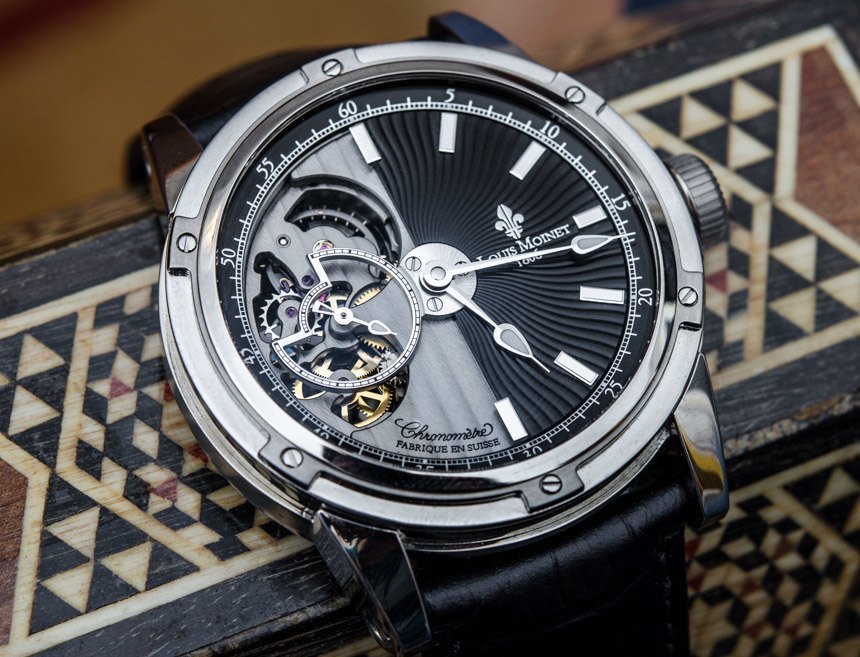 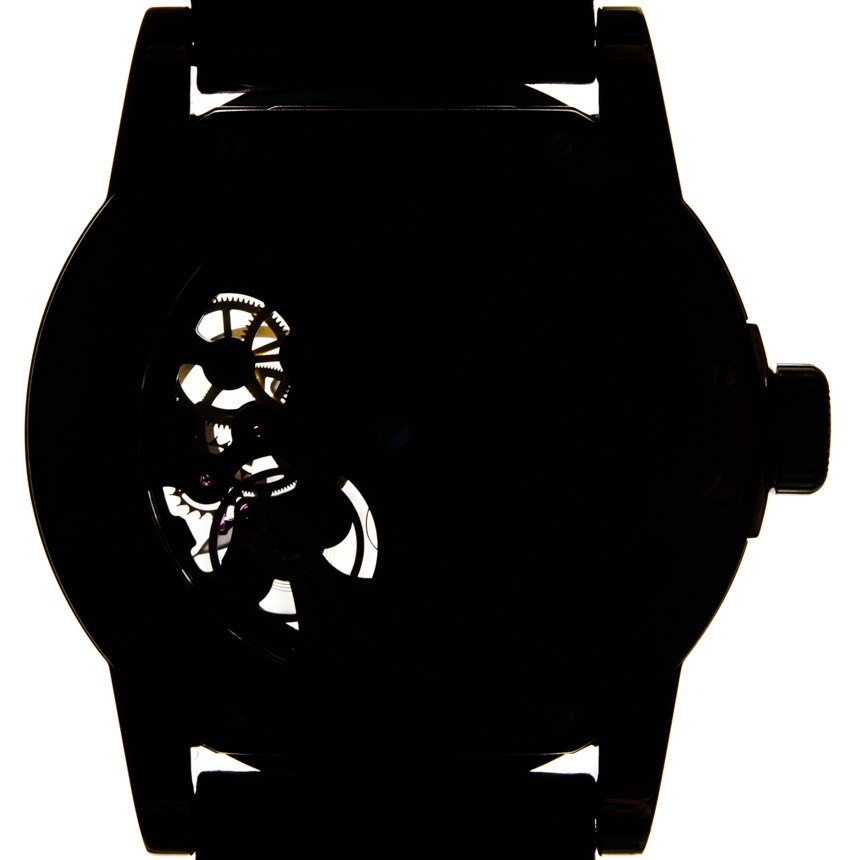 Necessary Data
>Brand: Louis Moinet
>Model: Mecanograph Titanium
>Price: $13,900
>Size: 43.50 mm
>Would reviewer personally wear it: Yes
>Friend we’d recommend it to first: The one who wants to invest in a higher-end watch – and wants to get noticed wearing it.
>Best characteristic of watch: Unique, recognizable and nicely executed two-faced dial with a 3D-look into the inner workings of the watch.
>Worst characteristic of watch: The case looks and wears too thick for a time-only automatic watch.