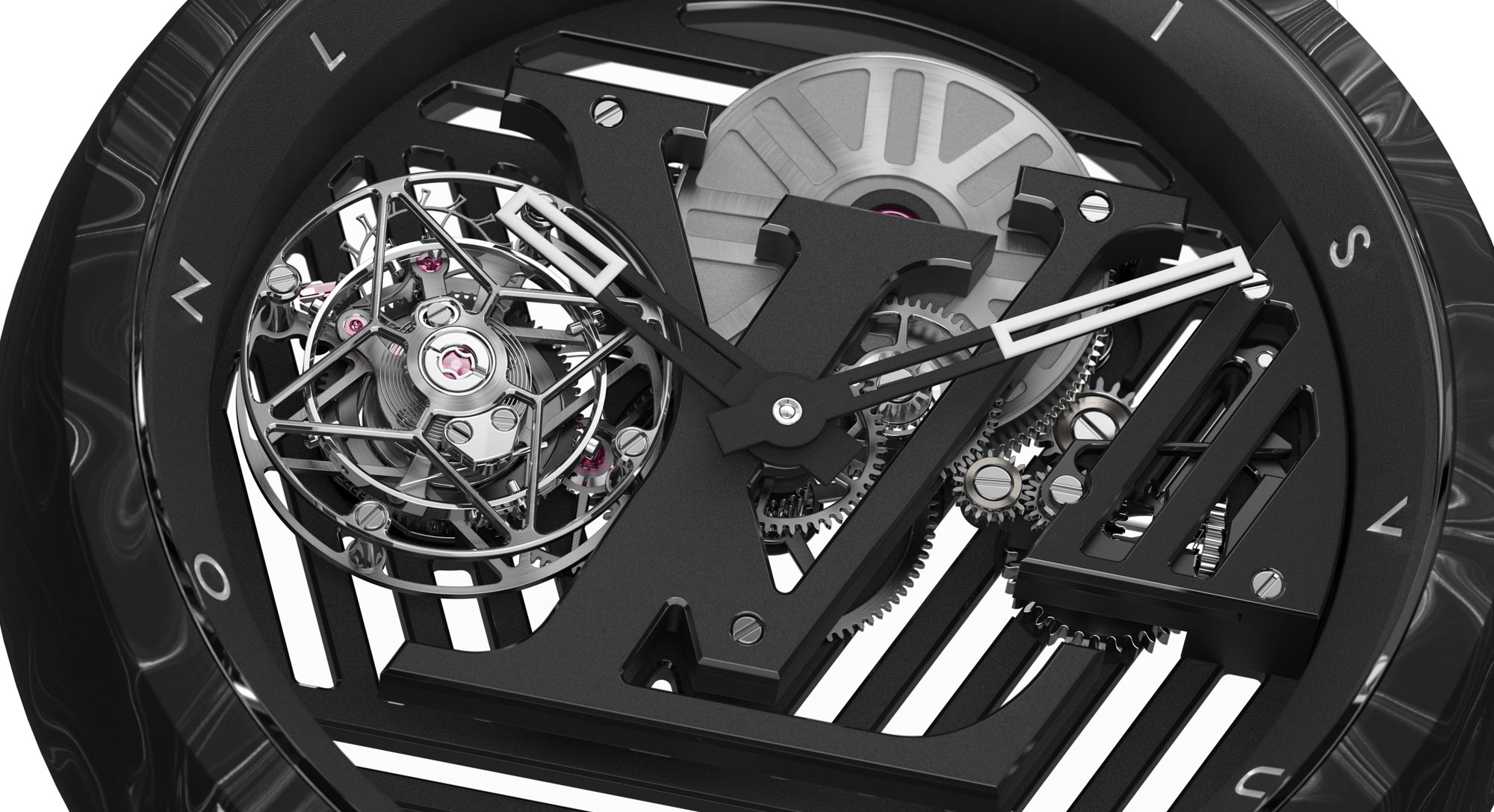 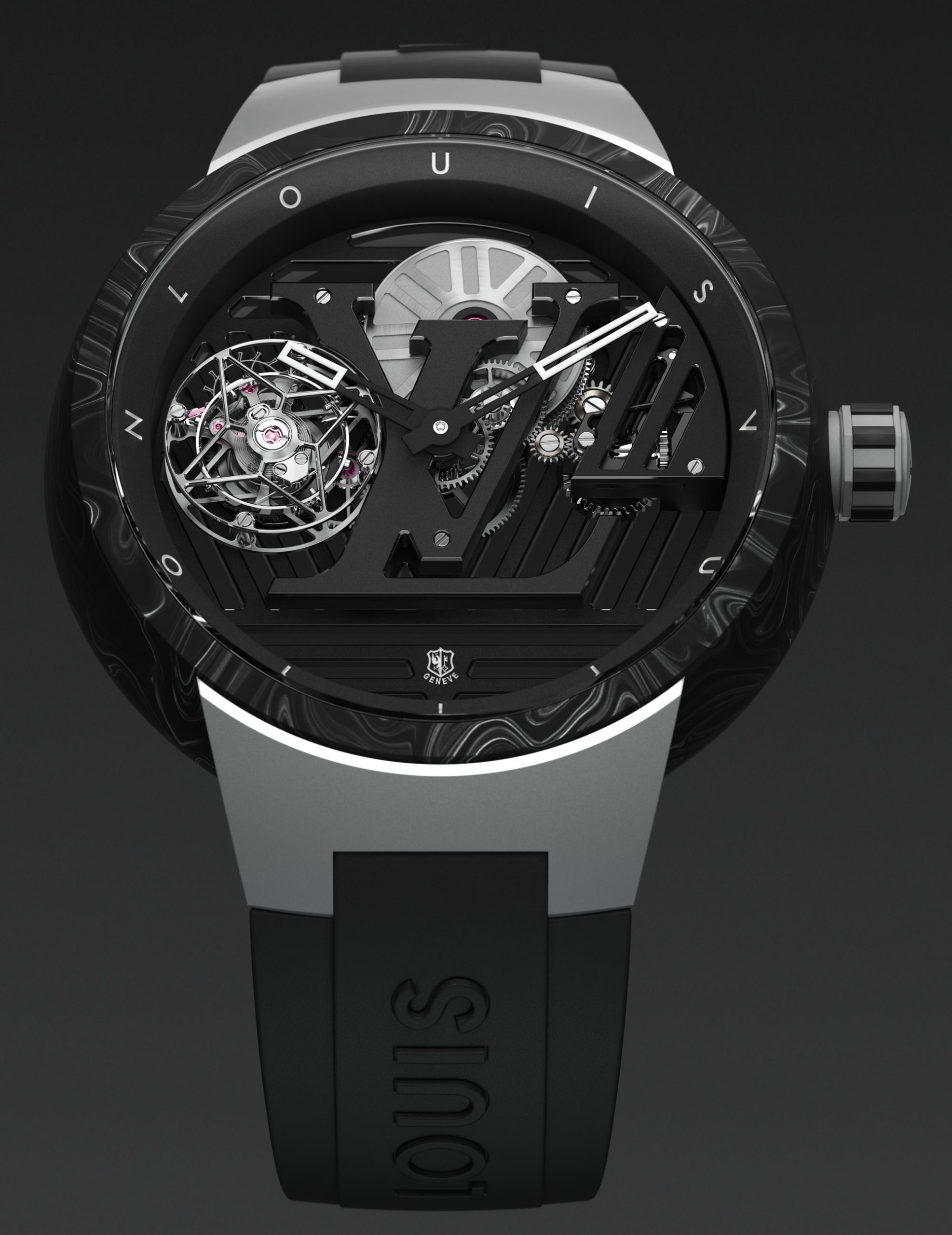 The world of Louis Vuitton watches is a whimsical place. Every once in a while, the world’s most valuable luxury and fashion company presents us with another unique-looking, often quirky, and sometimes extremely expensive, new watch. 2020 is, at least in this one way, is no different. Behold, the Louis Vuitton Tambour Curve Flying Tourbillon Poinçon de Genève that costs €280,000. 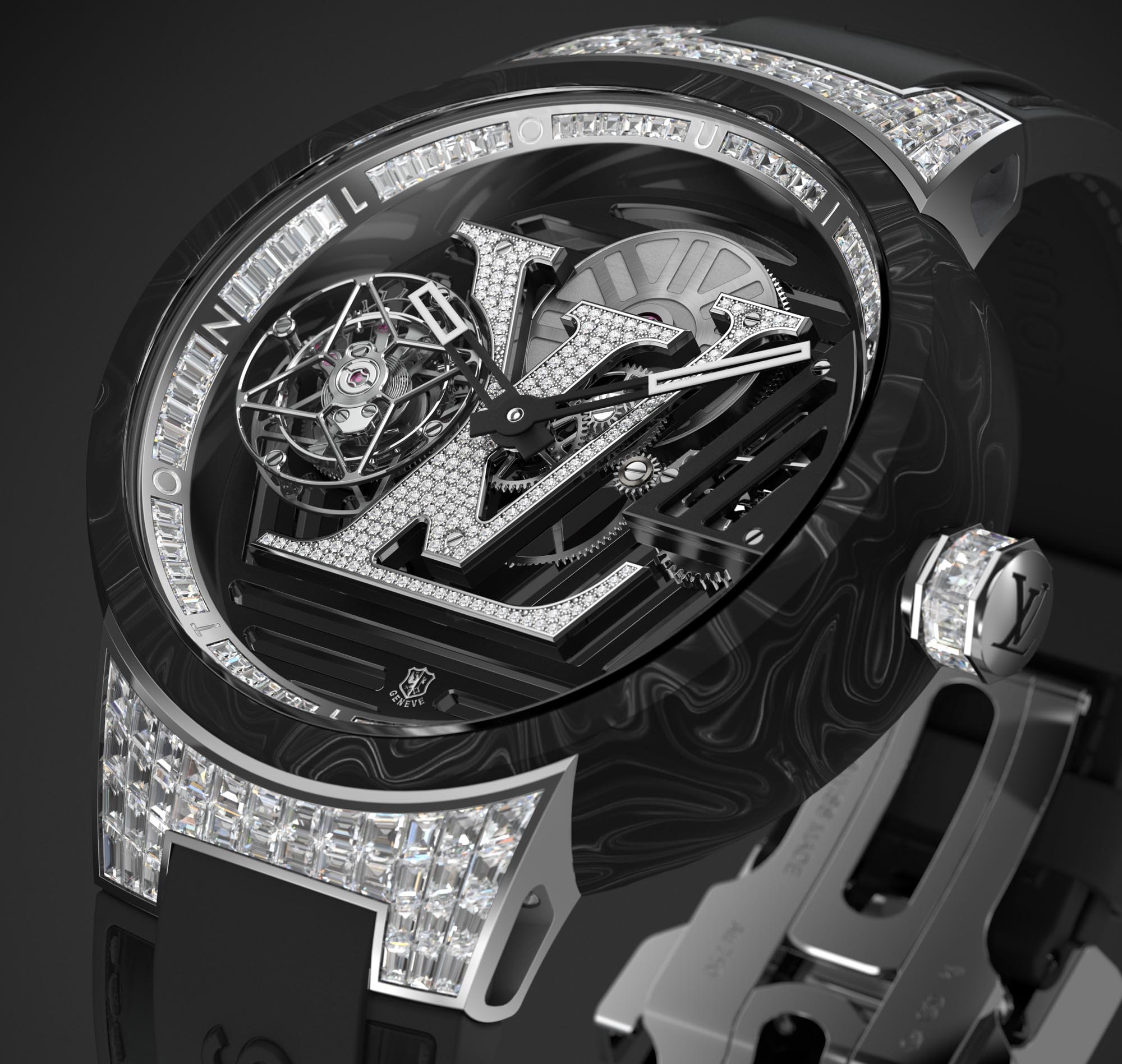 First, about that price… What it actually costs is €350,000, should you want some diamonds on it — but for the more restrained Louis Vuitton collector, it is true that a €70,000 savings is possible. That said, I’d deserve running out of toilet paper if I wished to imply that this was the one and only aspect of the new Louis Vuitton Tambour Curve Flying Tourbillon Poinçon de Genève to make your eyes water. In truth, the really notable bit is that it is yet another sign of life, telling the world that the haute horlogerie department of Louis Vuitton is fully functional. And that is something for many fellow watch-lovers to rejoice over. 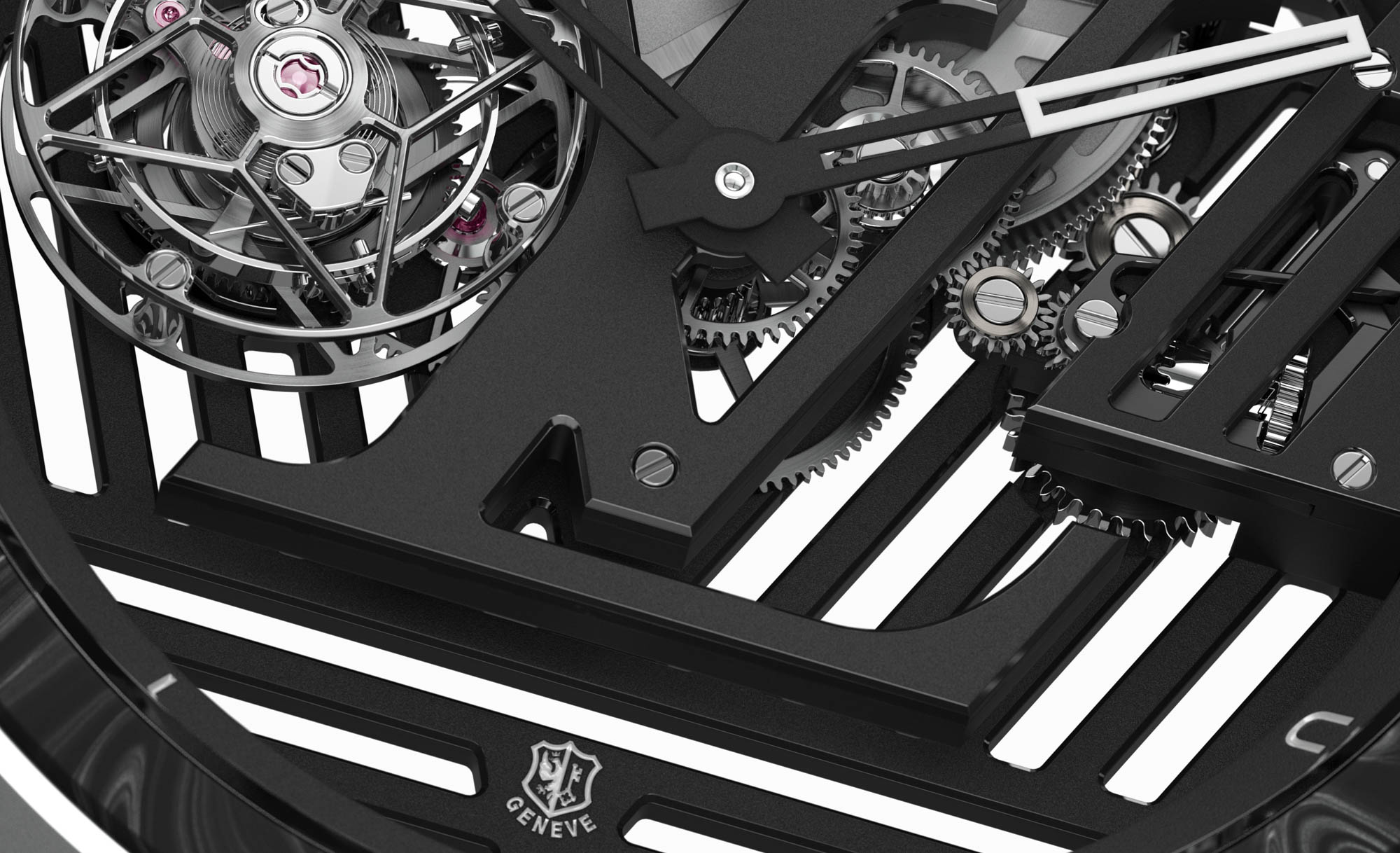 Louis Vuitton calls the Tambour Curve Flying Tourbillon “fine watchmaking of the future,” as well as “intensely masculine.” We’ll focus on the former statement and say that the reasoning behind it is the ultra-lightweight construction of this piece. Extremely light, extremely expensive watches have been growing in popularity in recent years, Richard Mille arguably forging the path that others, such as Omega, are now also heading down. 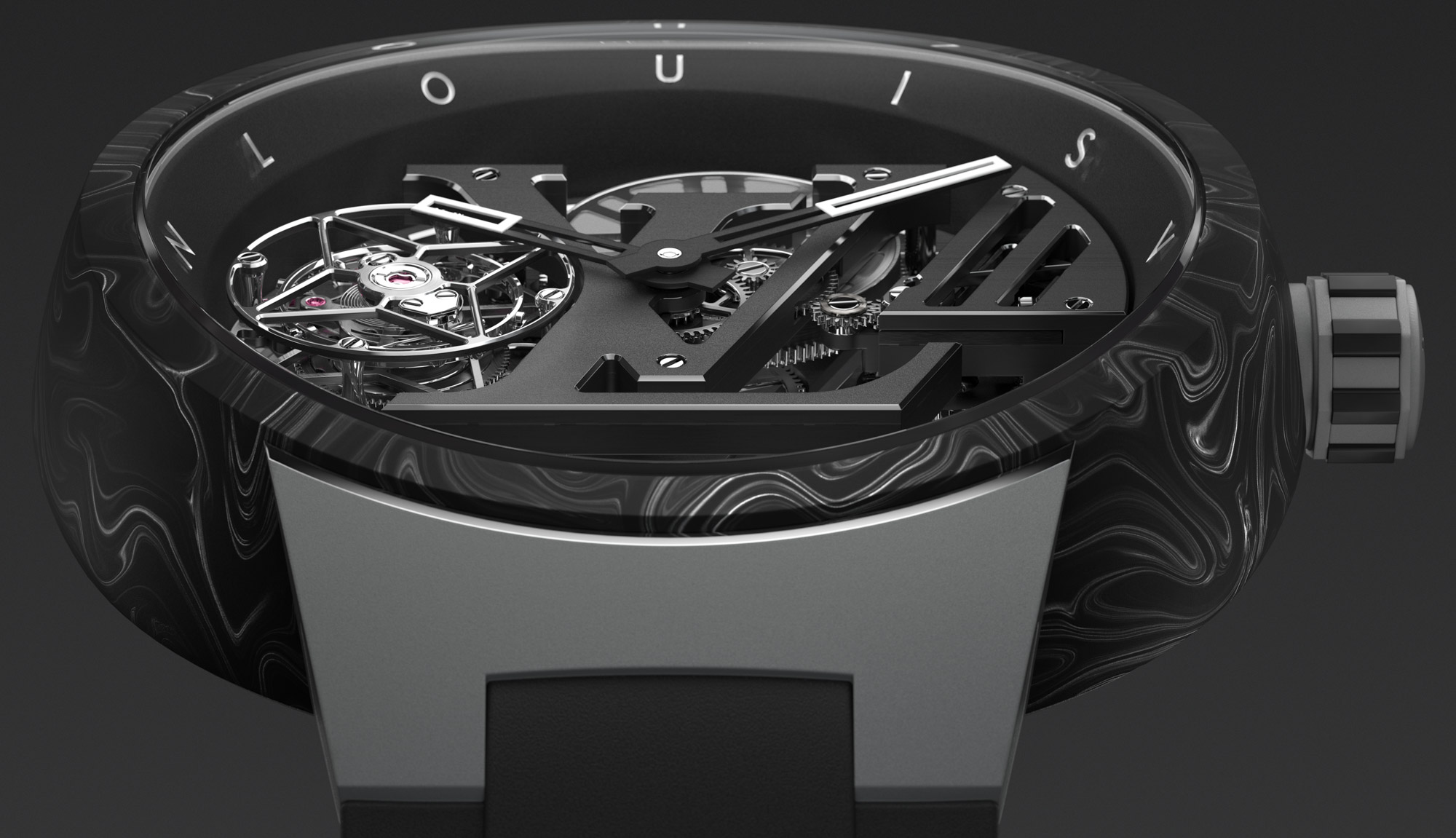 The Tambour case is a truly spectacular watch case that is such an elegant match for the historic brand that is Louis Vuitton. Here, it measures 46mm in diameter and a respectably slender 12.75mm-thick with a convex, upward-narrowing case band that also incorporates the 42m- wide bezel into its construction. The case, with its unique weave pattern, is crafted from Carbostratum®, “a composite material developed exclusively for Louis Vuitton” that is also somehow “used in aeronautics.” It is produced by layering over 100 sheets of carbon “at random,” compressing them at a controlled temperature and then milling them to the recognizable Tambour shape. On a side note, in architecture, a tambour is cylindrical or polygonal wall that supports a dome — which is why every time I walk past a basilica or other massive, centuries-old, applicable building, I think of the Louis Vuitton Tambour watches. For real. 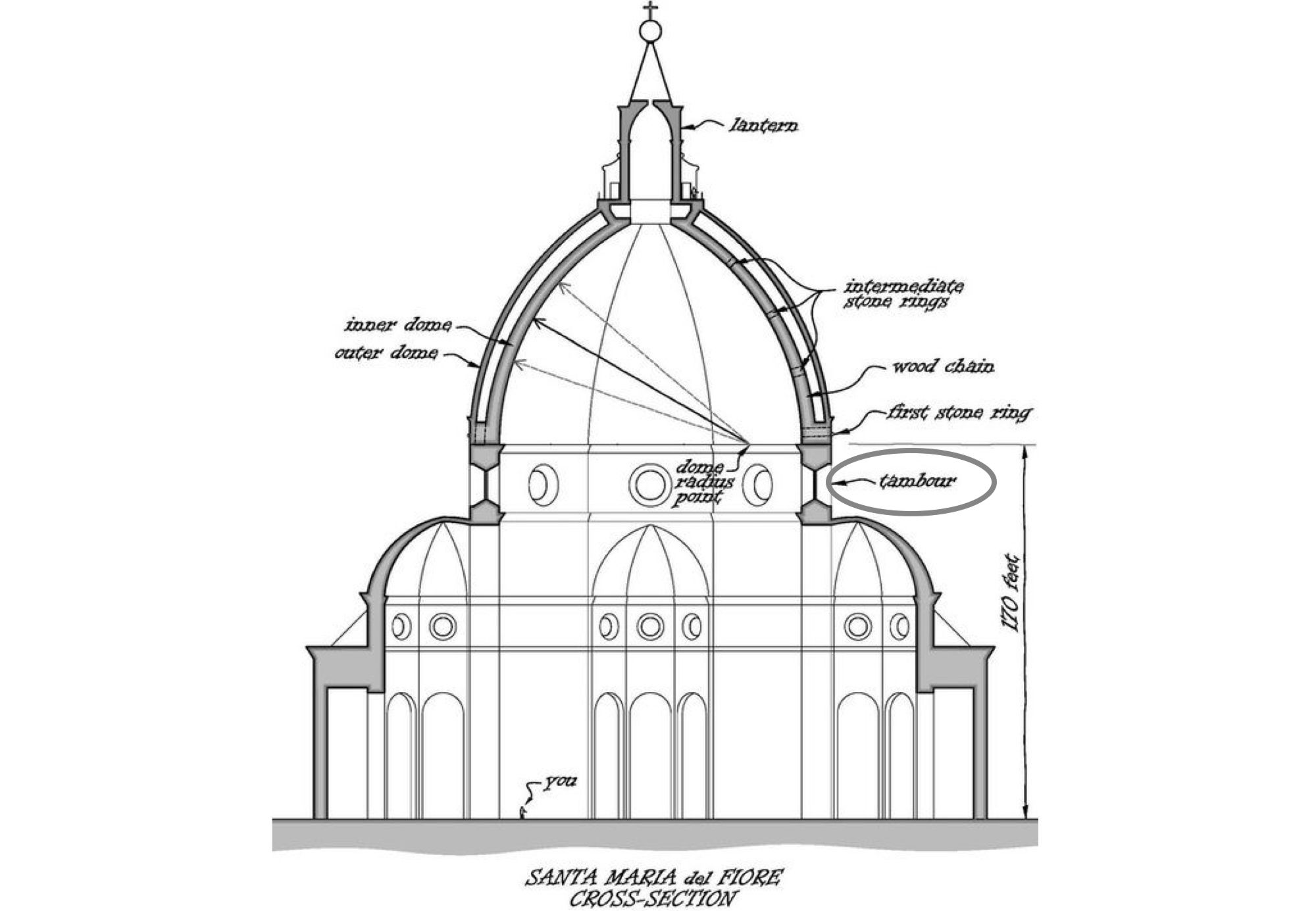 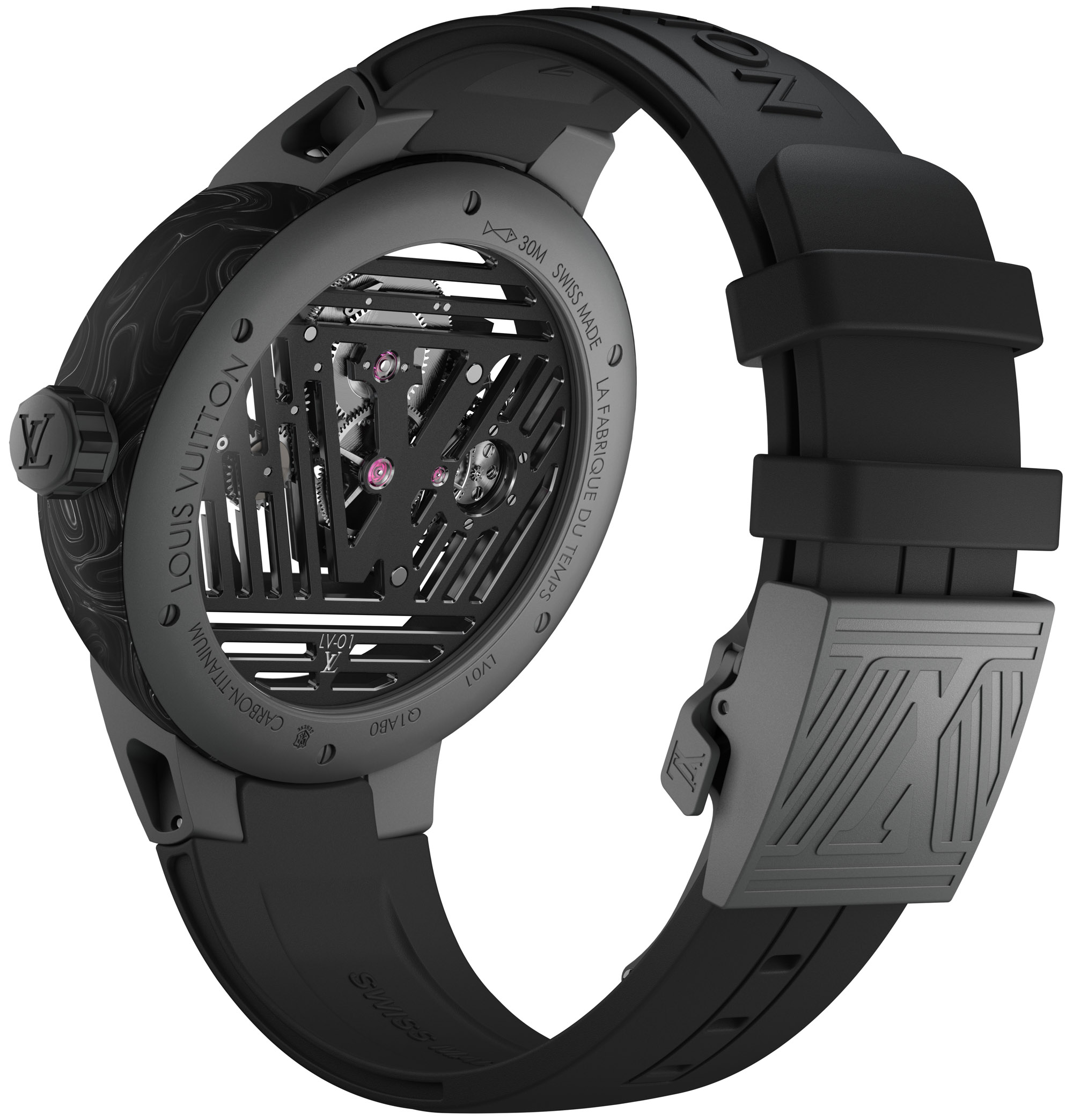 This Carbostratum® material is a sleeve over a grade 5 titanium base, a lightweight metal that is also used for the caseback. The lugs are crafted from 18k white gold on both versions, according to the official specs — however, from the looks of things, the non-bedazzled version appears to have titanium lugs as opposed to ones crafted from the precious metal. A neat touch would have been for the lugs to swivel: the fixed lugs, combined with the rigid rubber strap and the 46mm diameter, will likely mean that the Louis Vuitton Tambour Curve Flying Tourbillon will look right only on wider wrists. To one-up the elegance levels on this modern-looking watch, Louis Vuitton adds a black and a blue alligator strap to the mix, both backed with rubber lining. These, and the “fine watchmaking trunk” the watch is delivered in, will certainly be appreciated by the hardcore LV collector getting one of these. 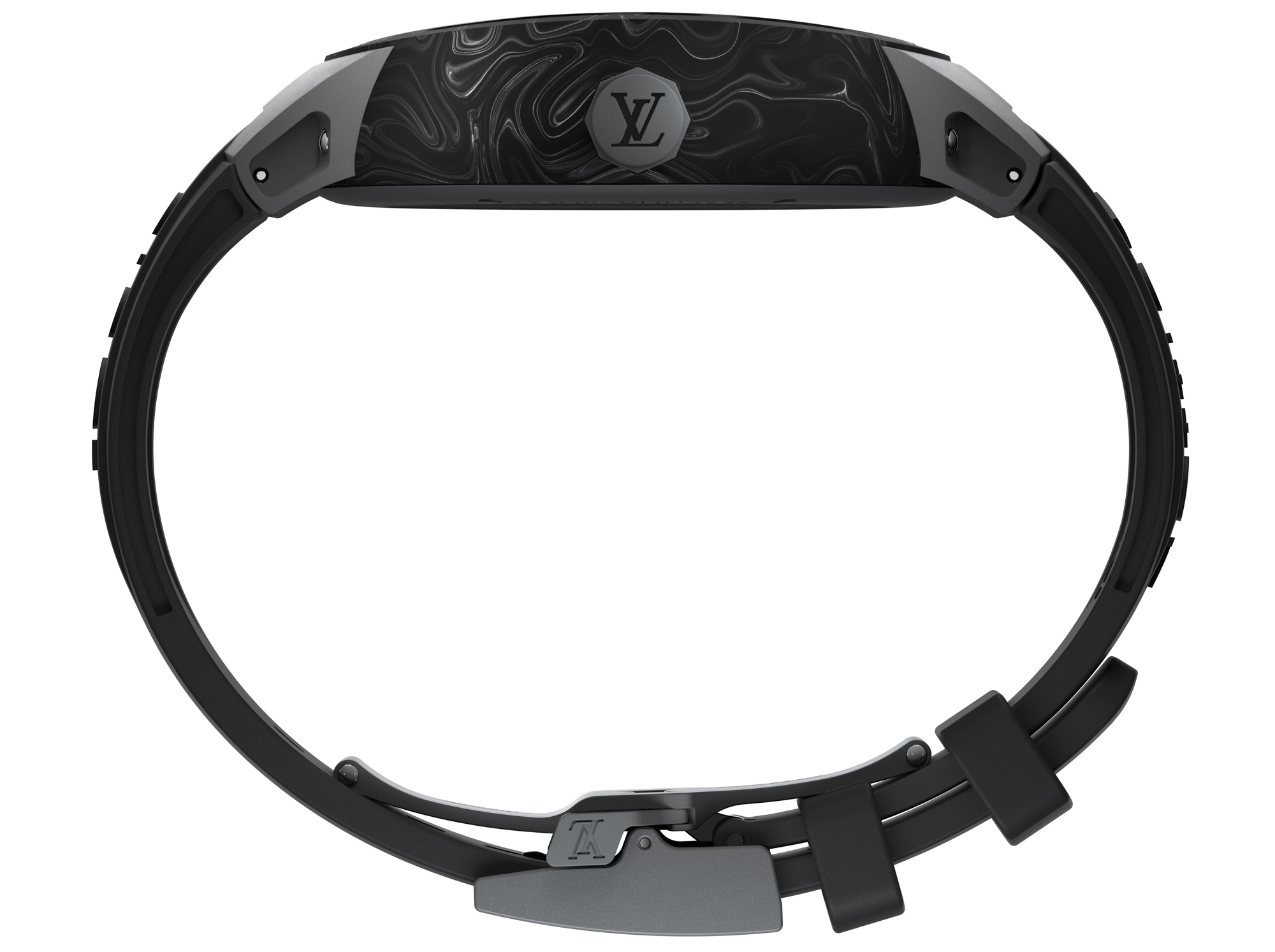 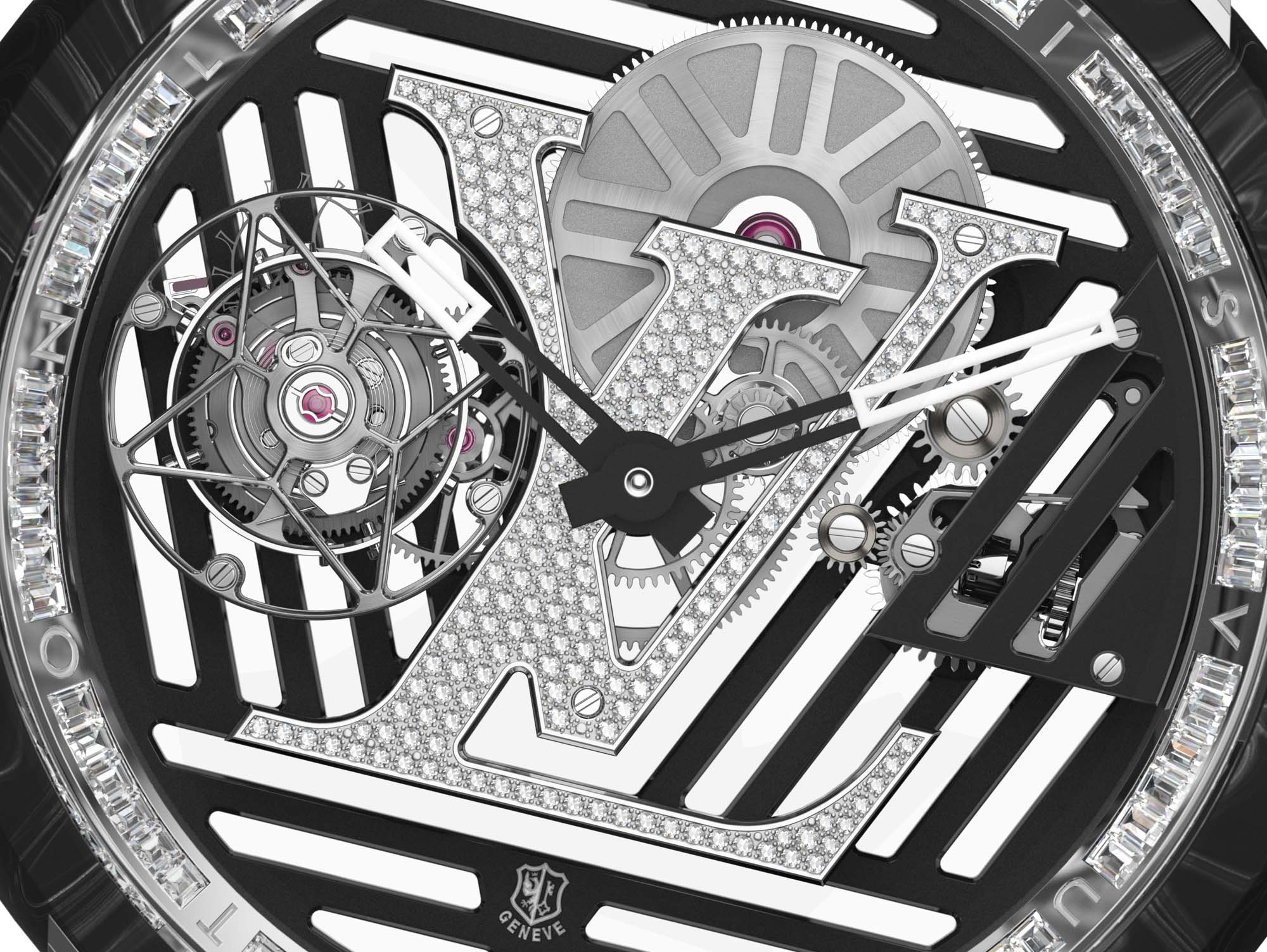 The LV 108 Calibre comes from La Fabrique Du Temps Louis Vuitton workshops in Geneva. This high-end atelier and complication specialist was acquired by the luxury giant in 2012 and employed to design, as well as manufacture, many of its watches, including some that run below the $10,000 mark. So, it’s not just an haute horlogerie tour d’ivoire but also a capable manufacture that paints dials, makes and decorates movement parts, and designs and assembles watches for Louis Vuitton, too. 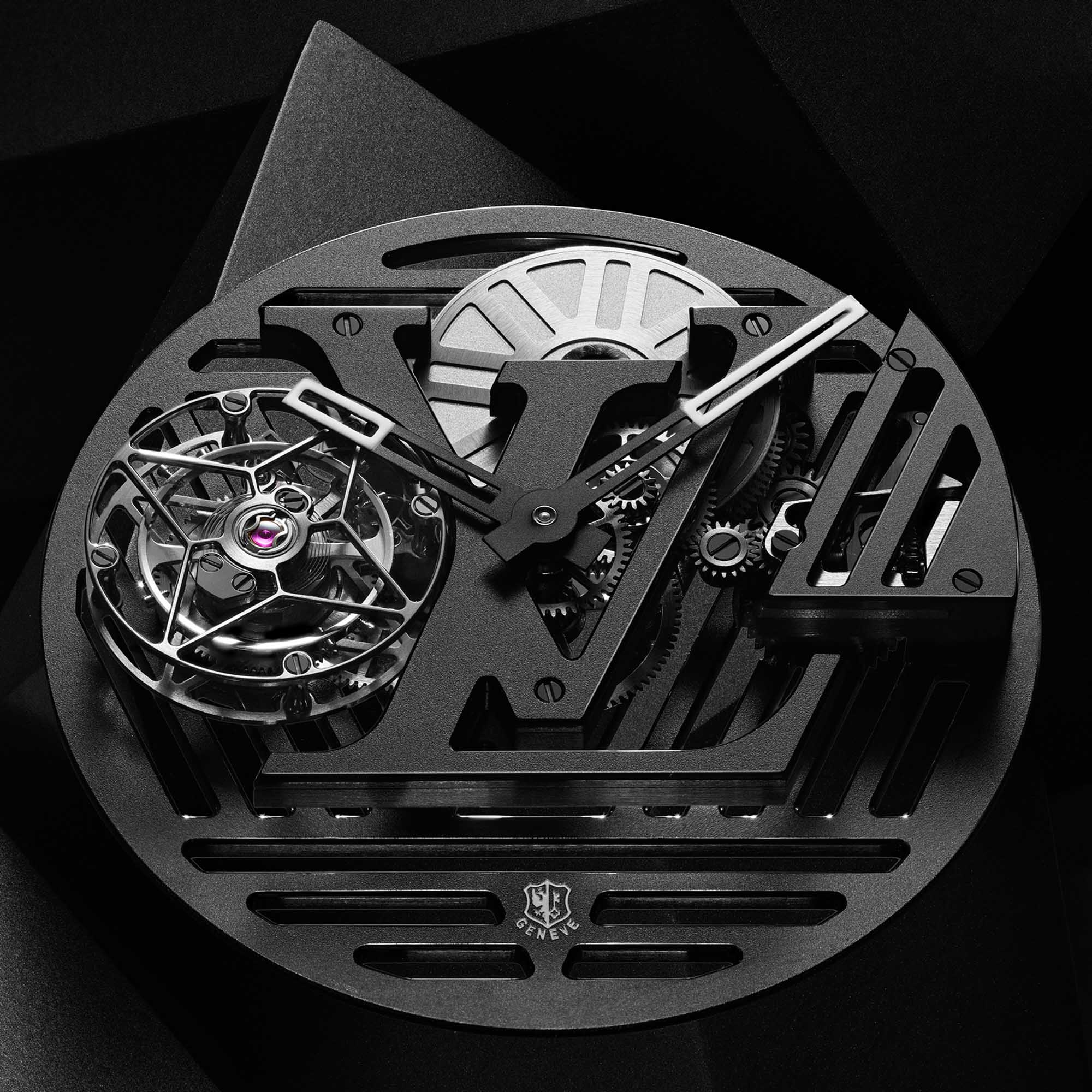 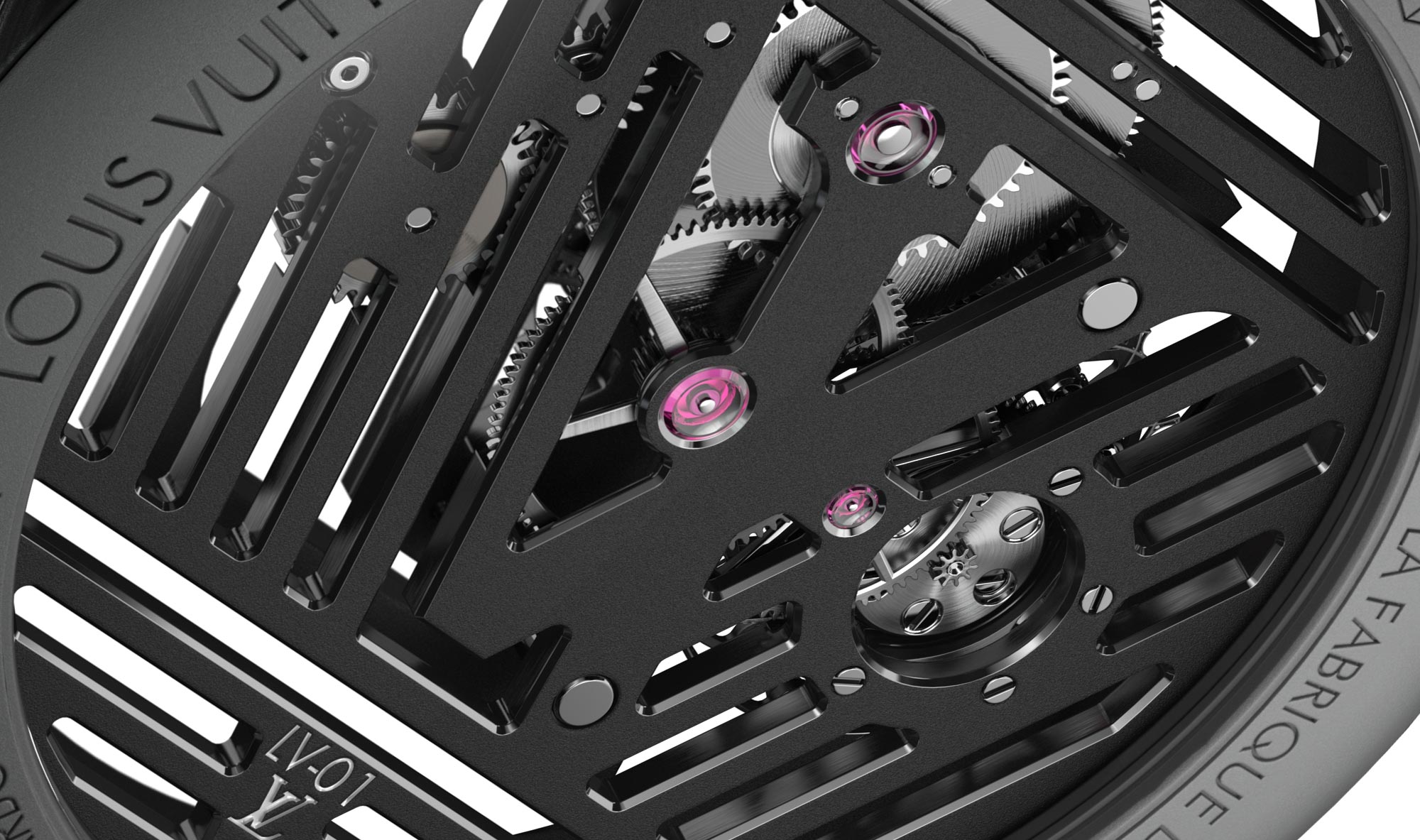 Comprising 159 components, the LV 108 Calibre offers 80 hours of power reserve matched to 21,600 semi-oscillations per hour. There is no shortage of beveled edges: the open-worked design of the plates front and back leave countless angles and lines to be beveled and polished by hand, making a caliber that is otherwise, in truth, rather basic in its construction, appear a lot more delicate and high-tech. 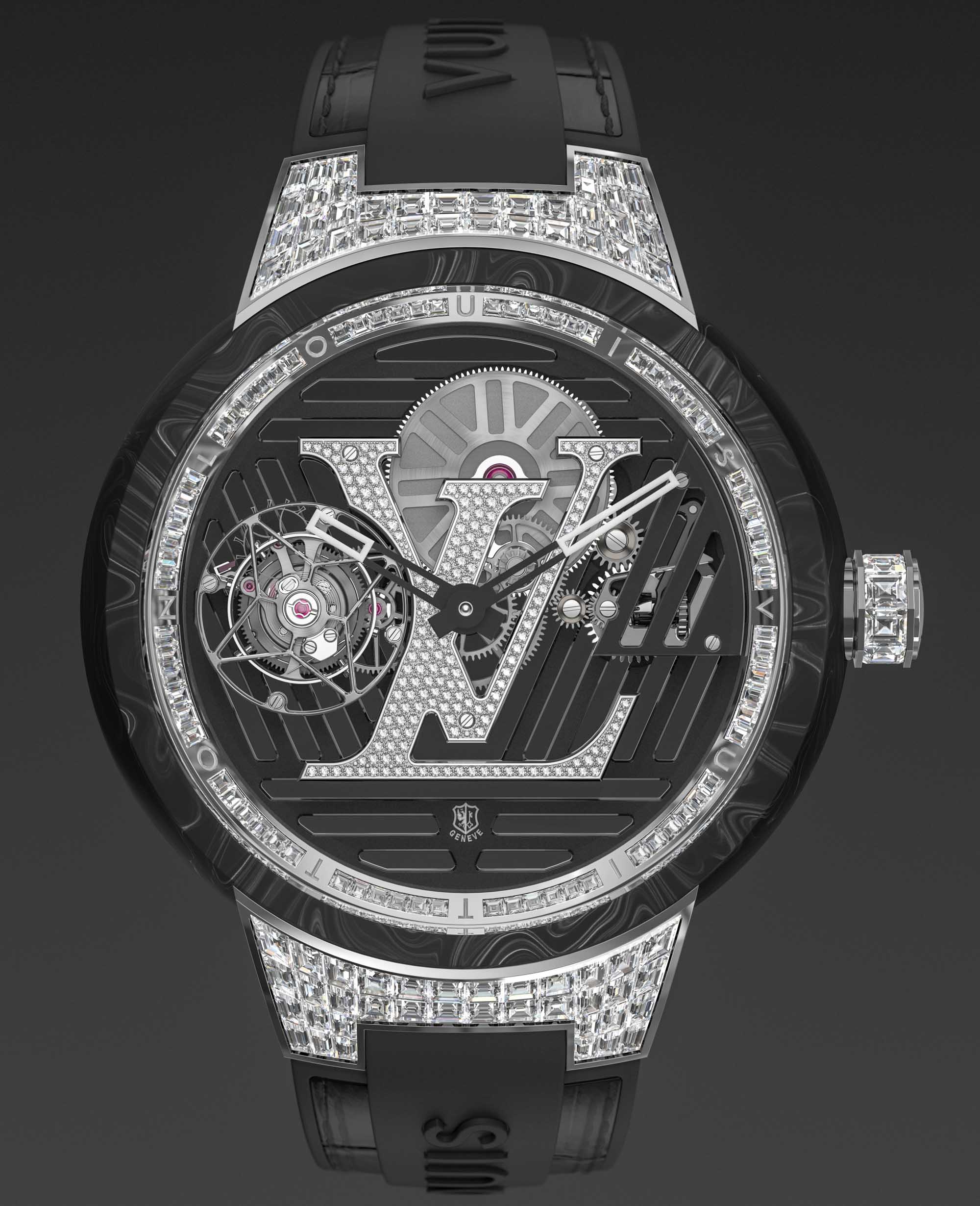