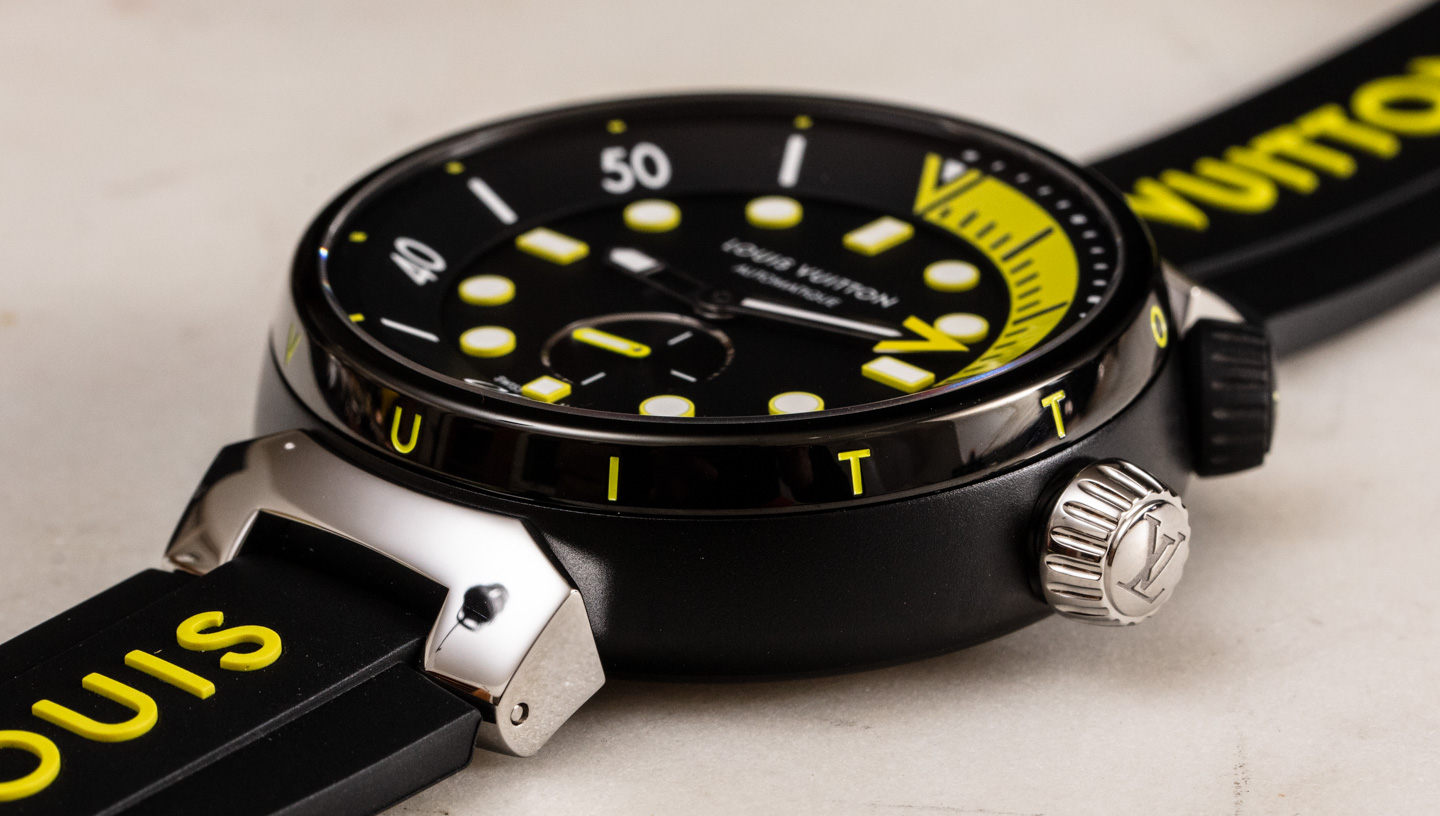 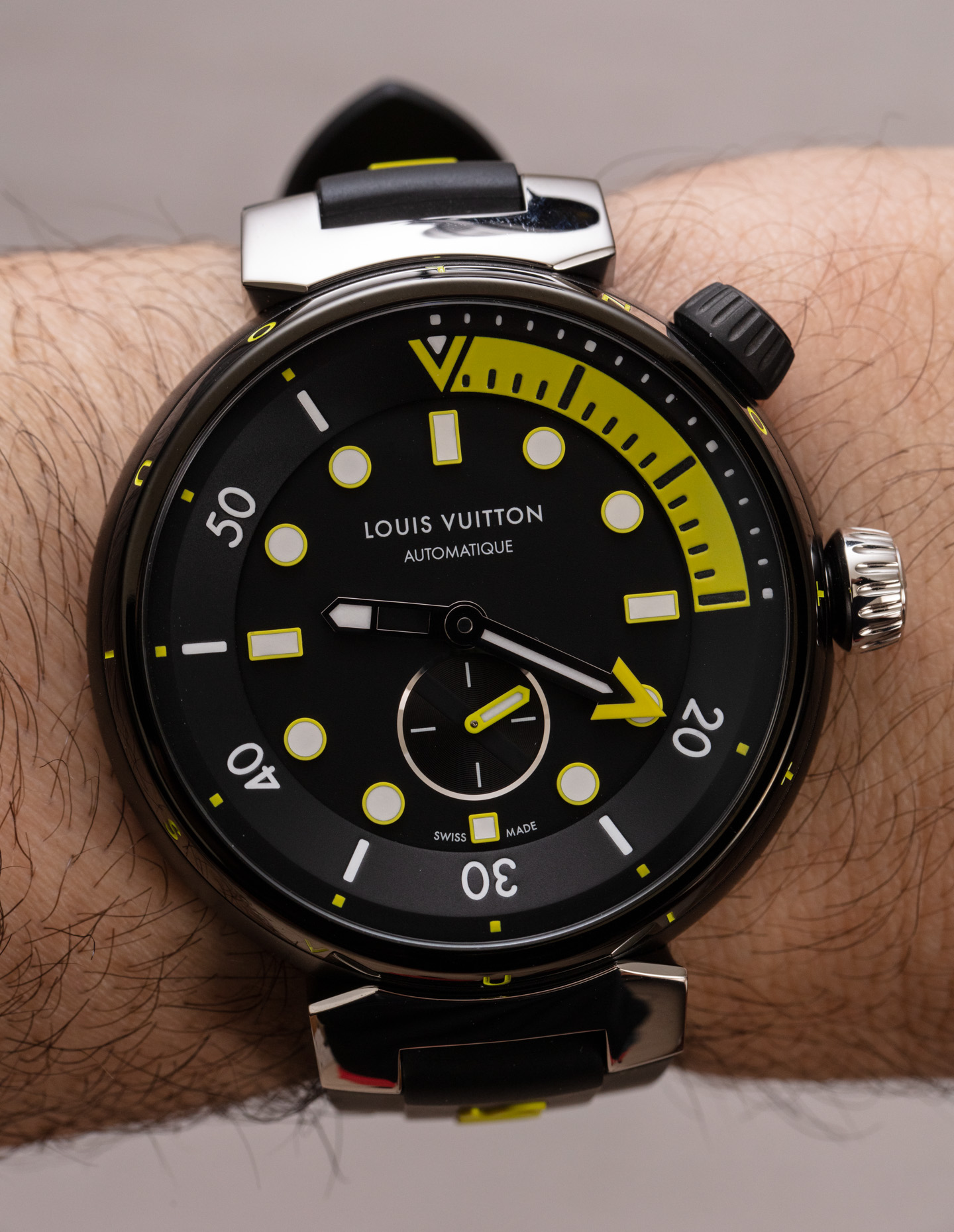 For 2021, Louis Vuitton introduces a third generation to its line of Tambour Diver watches  with the Louis Vuitton Tambour Street Diver collection. Today, I go hands-on with the black and yellow Tambour Street Diver Neon Black reference QA122 (debuted on aBlogtoWatch here). It’s a pretty great-looking watch that continues a legacy of some of the most lovely and quirky dive watches, from one of the world’s most popular luxury brands.

Even though LVMH (which Louis Vuitton is part of) owns a variety of watchmakers, including Hublot, BVLGARI, Zenith, and TAG Heuer, Louis Vuitton also makes watches and has been since 2002. Many of these watches are in the under-$10,000 range, but once in a while, Louis Vuitton creates some really spectacular stuff that can be priced into the hundreds of thousands of dollars. Closer to earth is the new Tambour Street Diver collection, which isn’t cheap but comes with a lot of style and refinement (you know, a lot like other Louis Vuitton gear). 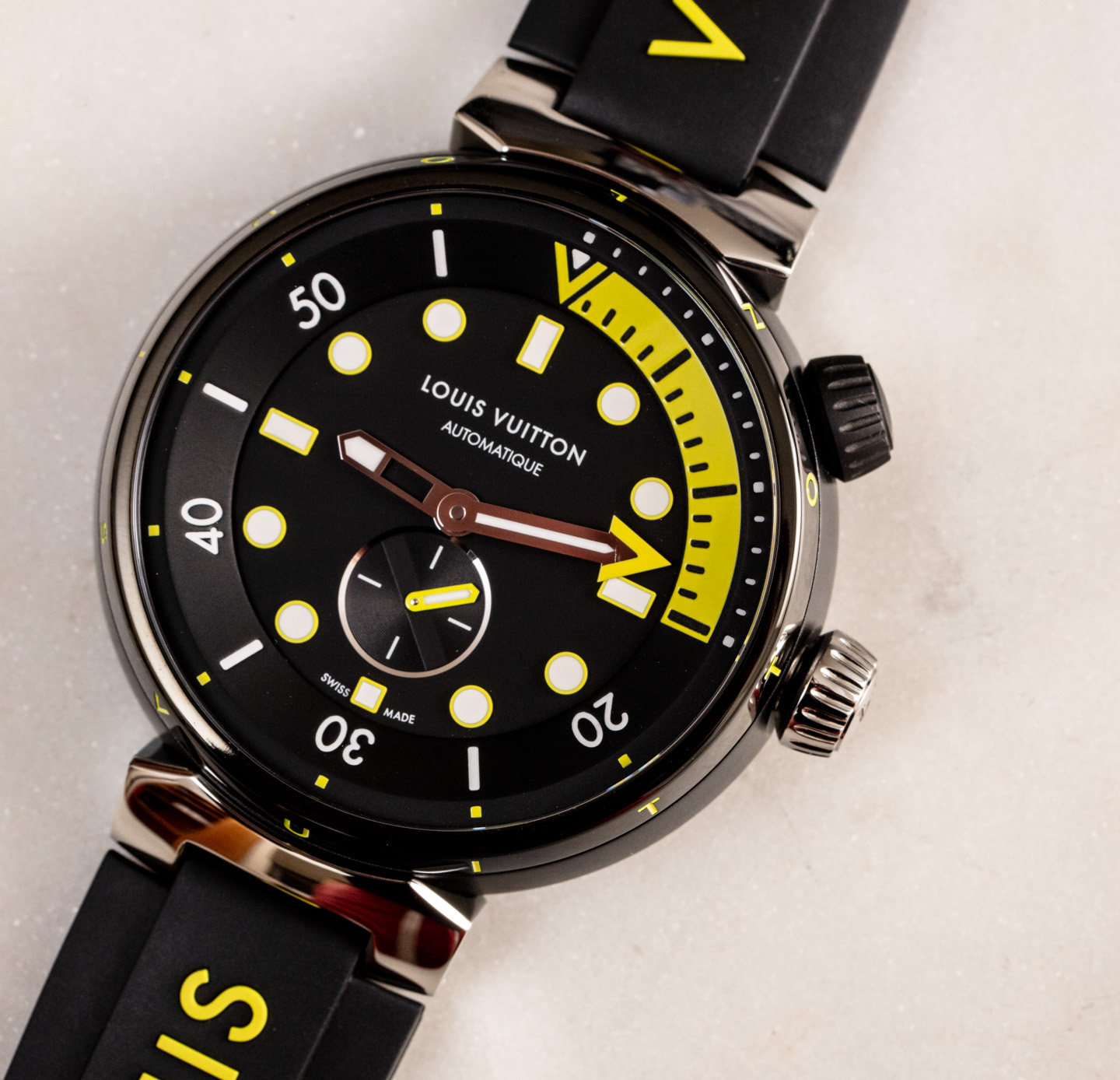 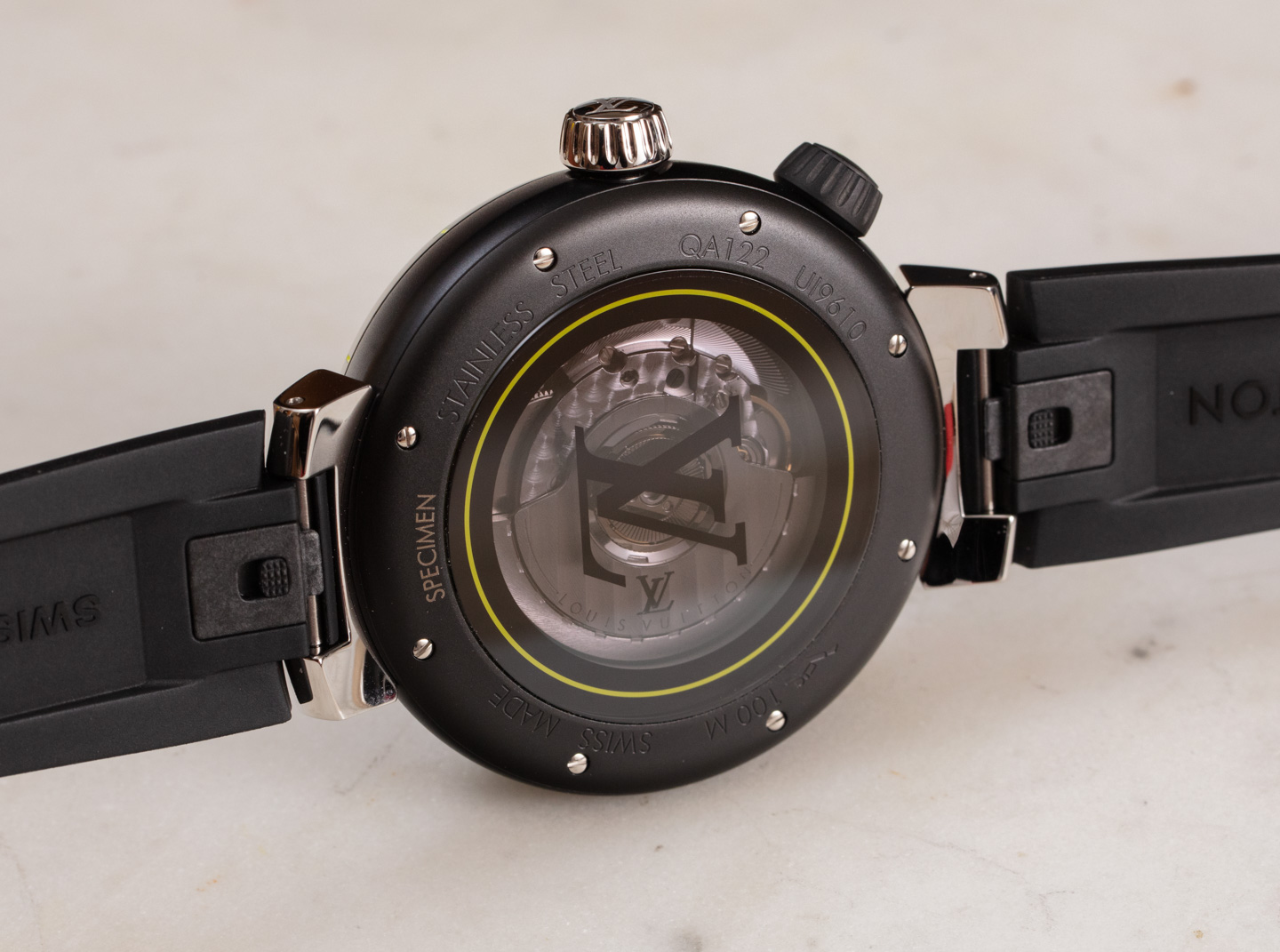 The Louis Vuitton Tambour Diver began life back in 2005 when Louis Vuitton first released that excellent product (such as the reference Q1031 model that I have owned and admired for a number of years). Louis Vuitton later came out with a second-generation Tambour Diver (such as the reference Q113A) that made a number of changes to the case and dial. My favorite part of that second-generation Diver was how the subsidiary seconds hand was designed to look like a diving flag. Now, the third generation Tambour Diver is here, and it is more intended for on-land use given its name, the “Tambour Street Diver.” The collection launches with three models for men containing automatic movements, and a smaller white-colored model for women that contains a quartz movement.

The iconic Tambour case (modeled after the look of a musical drum) has not visually varied much from generation to generation, but across the various Diver generations, Louis Vuitton has made a number of changes. In fact, only the first generation Tambour Diver was a true diver’s watch with 300 meters of water resistance. Today — and ever since the second-generation product — the Tambour Diver case is water-resistant to 100 meters. All that seems to have changed are the crowns and caseback design. While 100 meters is more than adequate for most swimming and even some diving activity, I do wish the product was water-resistant to a full 300 meters. 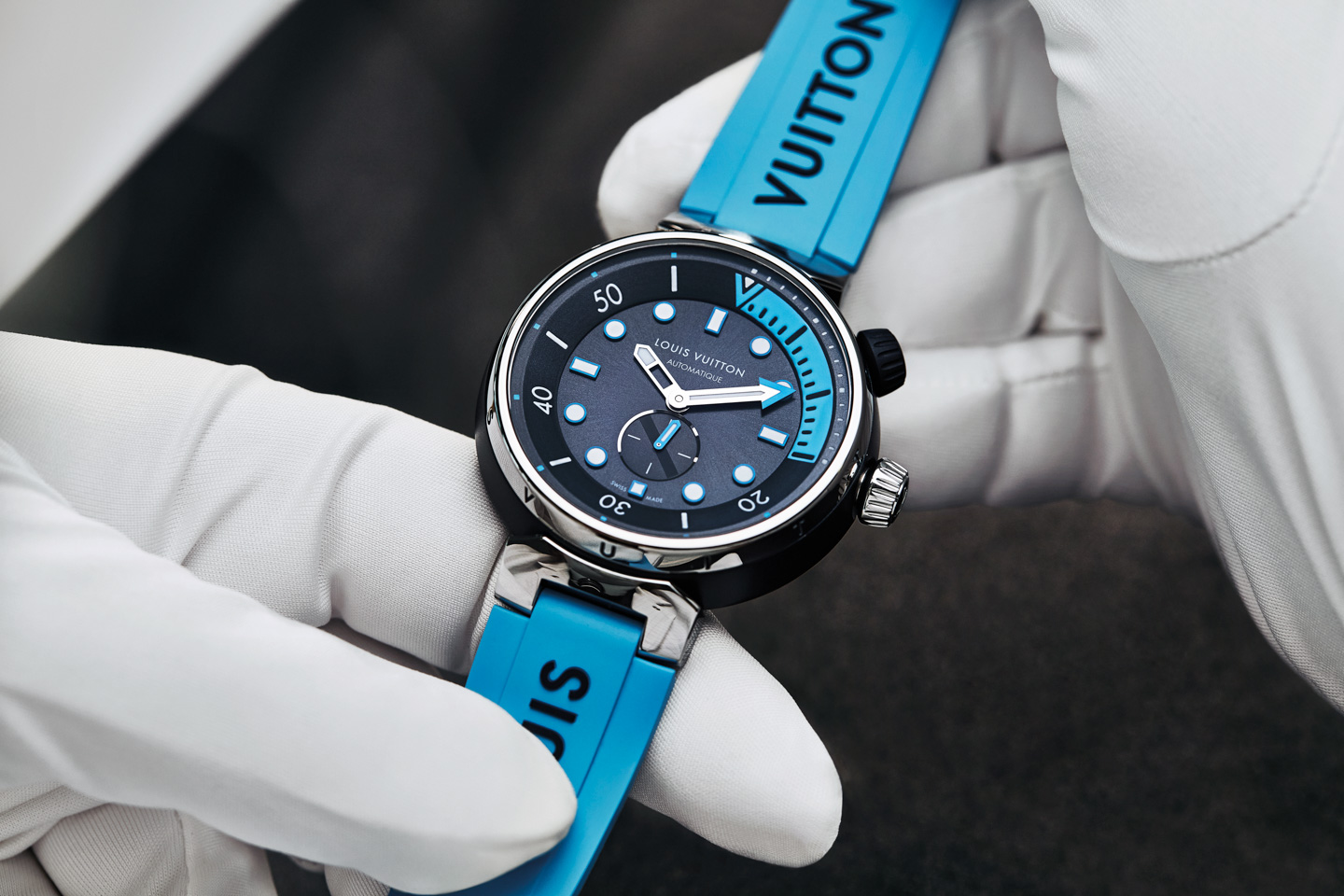 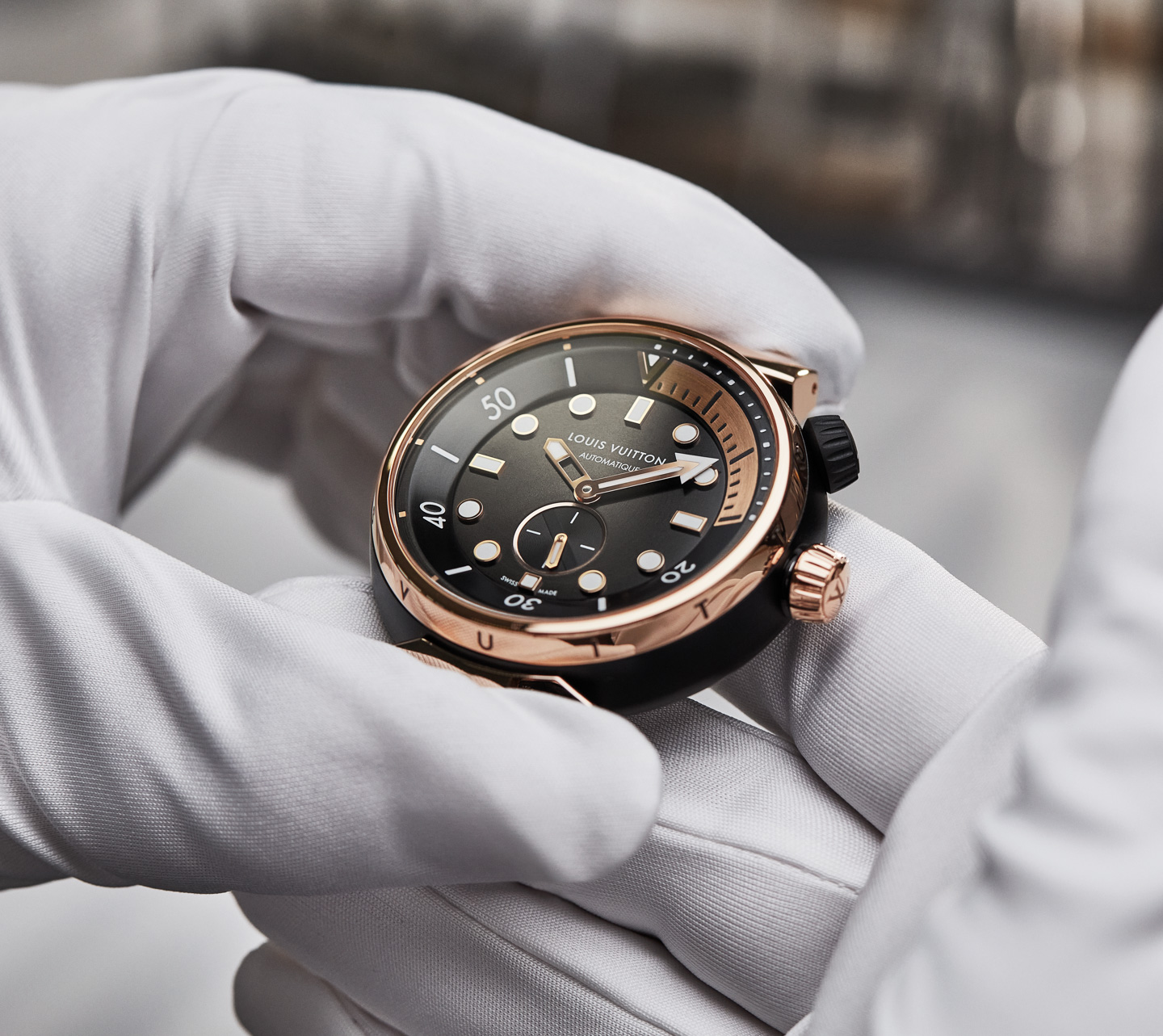 The 2021 Tambour Street Diver has a very similar dial layout as the original Diver, albeit without the date window. We see a return to the second case crown, which is used to rotate the internal diver’s timing bezel. This remains one of my favorite watches with an internal rotating bezel. The internal bezel crown is coated in black rubber with a small yellow diver motif on it, and, according to Louis Vuitton, it is colored black so as to visually differentiate it from the crown for the time. The two crowns look like miniature versions of the Tambour case – which is charming, and the design of the crowns is new for this generation Tambour Diver product. The case is still the same 44mm-wide size in steel, which, for this Tambour Street Diver Neon Black, is mostly in matte PVD-coated black.

Elements like the lug structure and buckle (along with the primary crown) are in polished steel, making for a nice two-tone look. I really like the neon yellow-colored Louis Vuitton lettering around the periphery of the case, which is a theme that began with the original Tambour Diver. 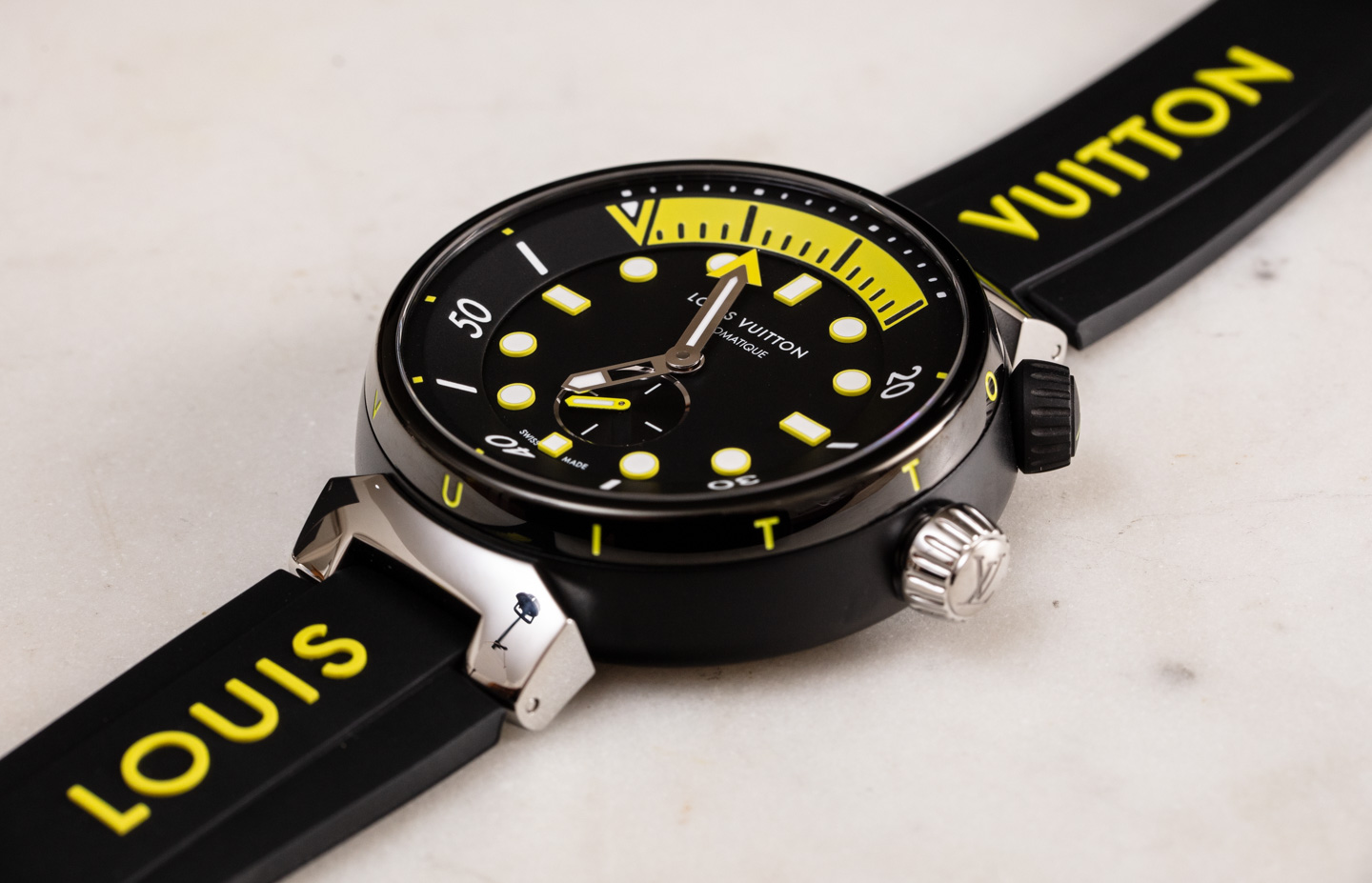 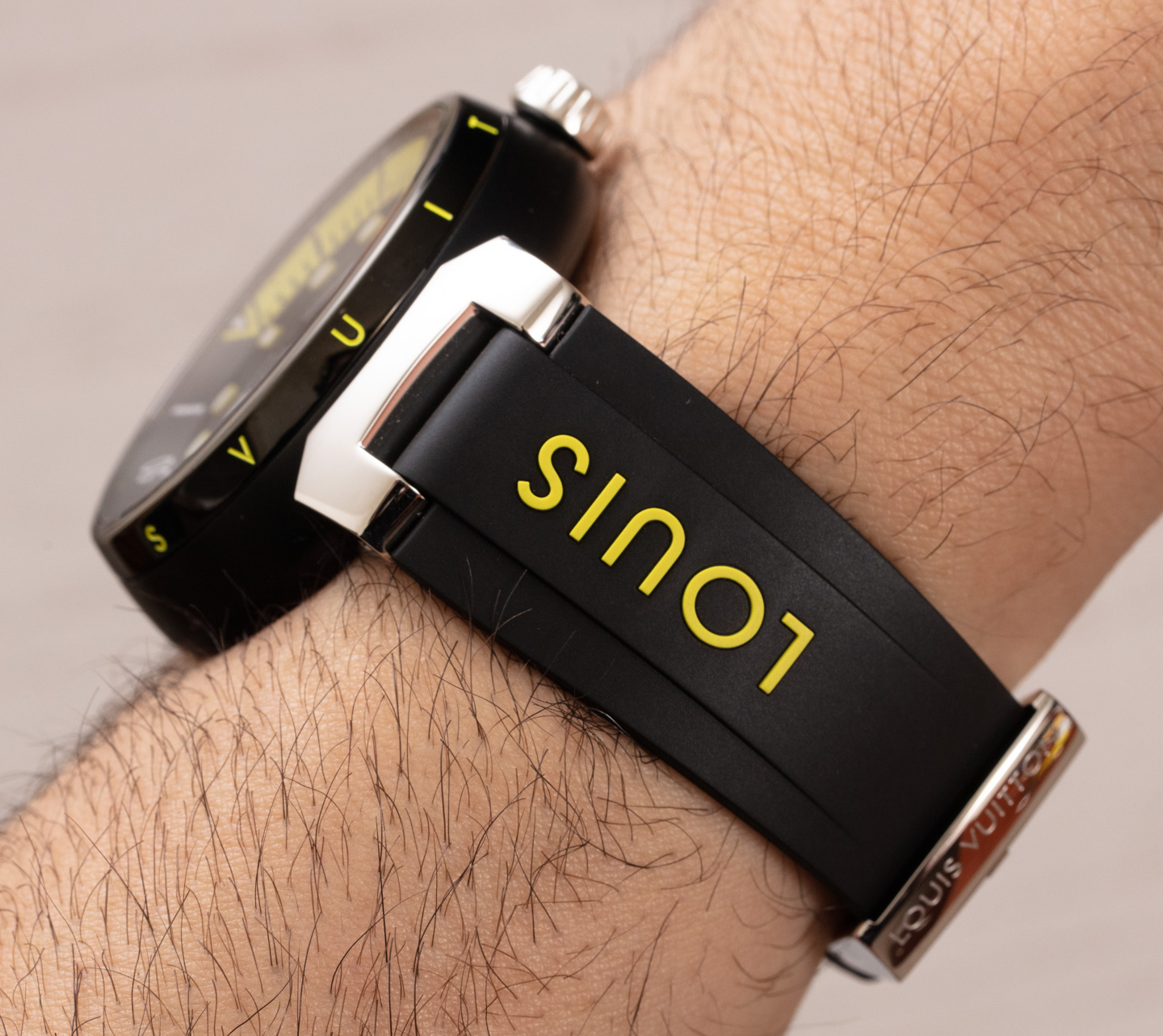 The Tambour Street Diver now features a display caseback with a semi-smoked sapphire crystal that makes the movement view a bit more “moody.” The movement inside the watch is a Swiss Made ETA 2895 automatic, which has been used for all the mechanical Tambour watches on account of its having a subsidiary seconds dial. The movement operates at 4Hz with about two days of power reserve. As I said before, the Tambour Street Diver opts for a more symmetrical dial layout and thus removes the presence of the date window that on previous-generation models was located at 3 o’clock.

The dial of the Tambour Street Diver is very youthful and trendy but also fun and legible. It has a classicism to it given the focus on readability without extra decorative design elements. The first-generation model was the same but had touches like the use of dark mother-of-pearl for the subsidiary seconds dial material. The Tambour Street Diver borrows a look from the middle-generation Tambour with a diagonal line cutting through it — only in black-on-black colors. This was originally inspired by the iconic red and white diver’s flag, but for the Street Diver, is just a small visually interesting element that adds character to the face when you look closely enough at it. 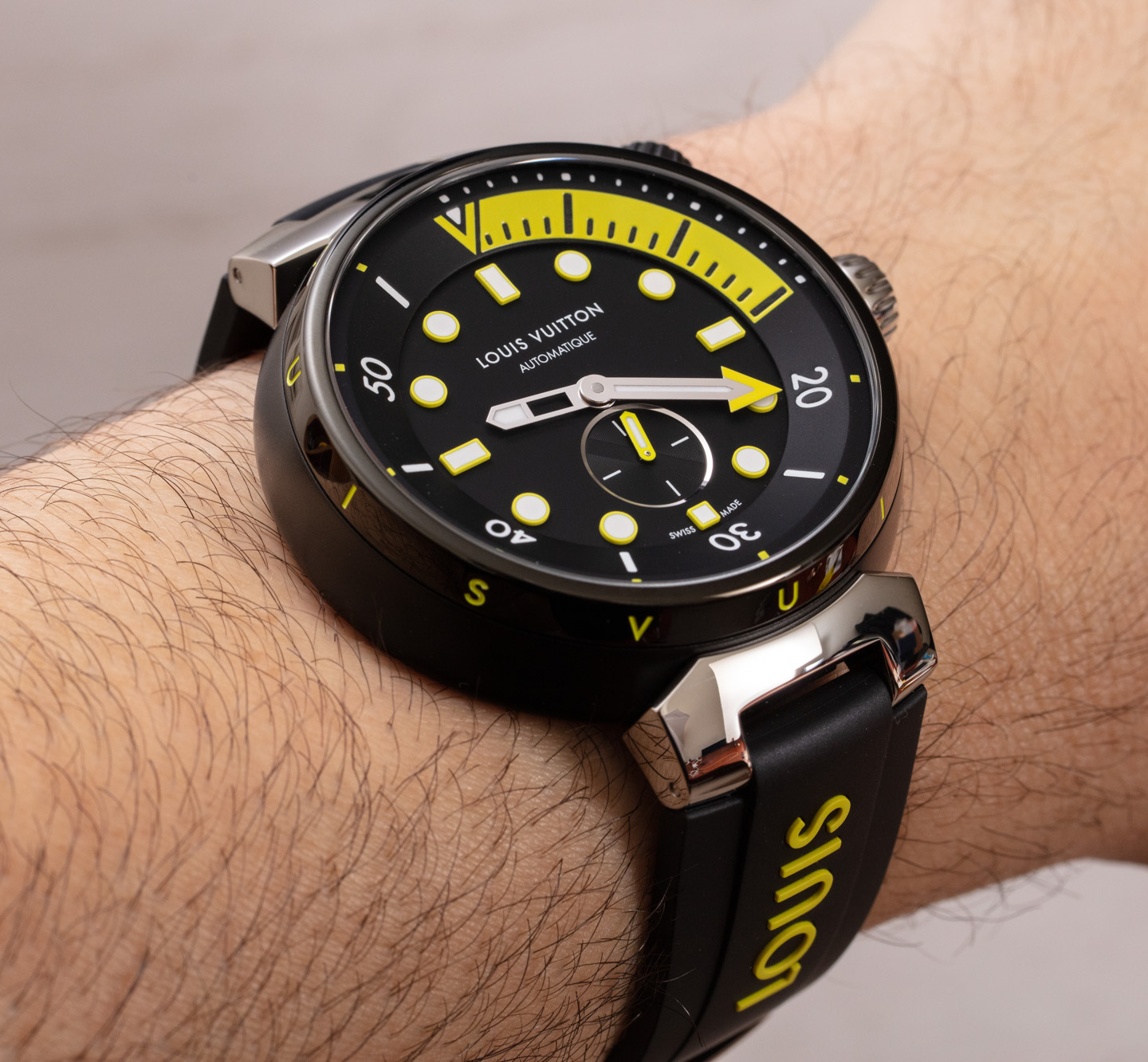 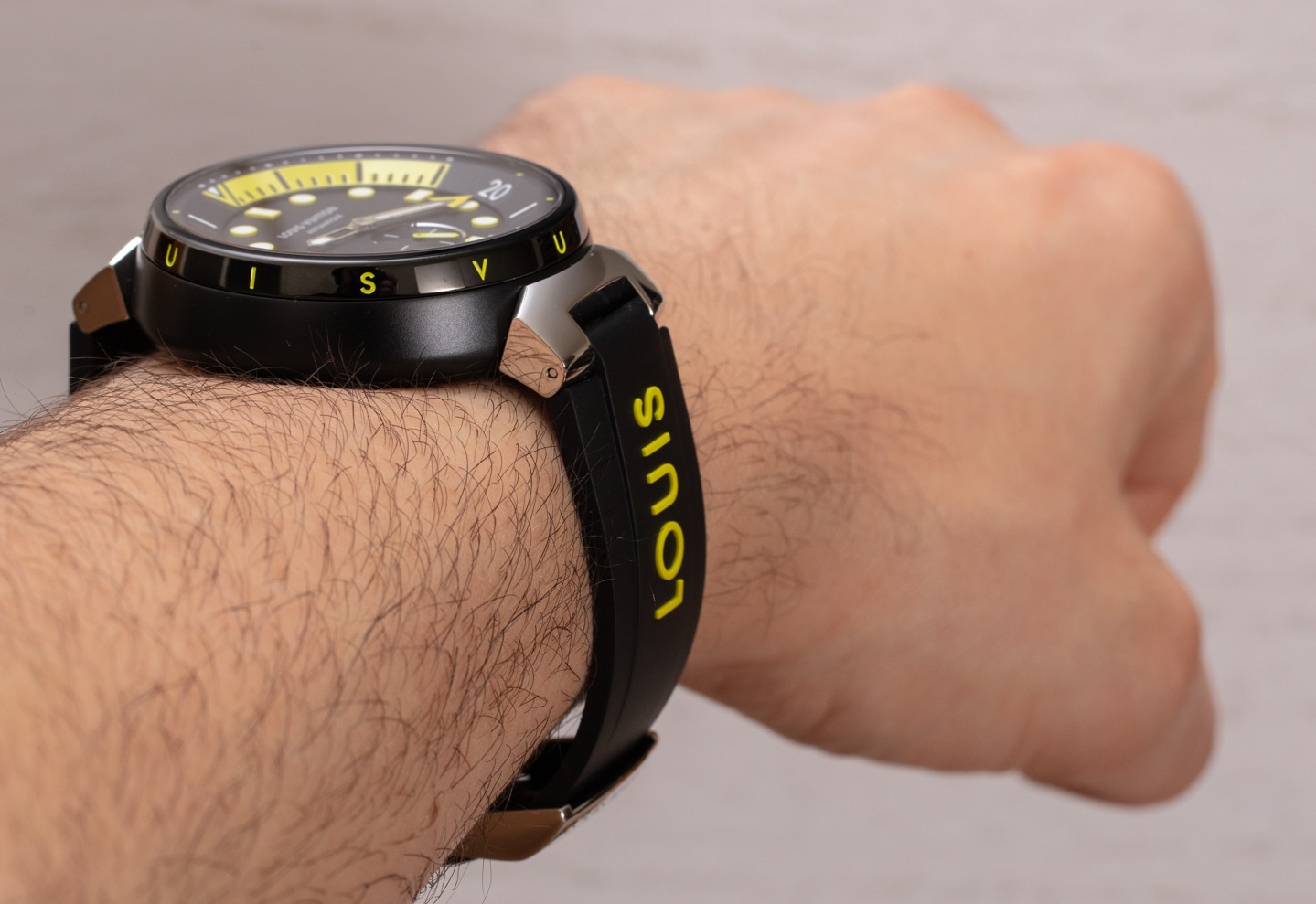 The hour and minute hands are polished, with the minute hand having a broad “yellow V” arrow end to it. Another Louis Vuitton “V” is located in the design of the 60-minute marker on the internal rotating bezel. The polish of the hands doesn’t really hurt legibility at all, and it does help them match the polished steel parts of the case a bit better. The dial is painted with a fair amount of Super-LumiNova luminant material and over the dial is a flat, AR-coated sapphire crystal.

Attached to the case is a custom black rubber strap that has a neon yellow “Louis” on one end and “Vuitton” on the other. A reverse color strap is also available (yellow rubber with black text) On the wrist, the Tambour Street Diver is extremely comfortable — something which has remained true throughout the entire Tambour watch collection. Also new are the quick-release straps, which make it easy to vary up the fashionability of the Tambour Street diver Neon Black with ease. Of course, you’ll have to do it with straps acquired from Louis Vuitton directly. 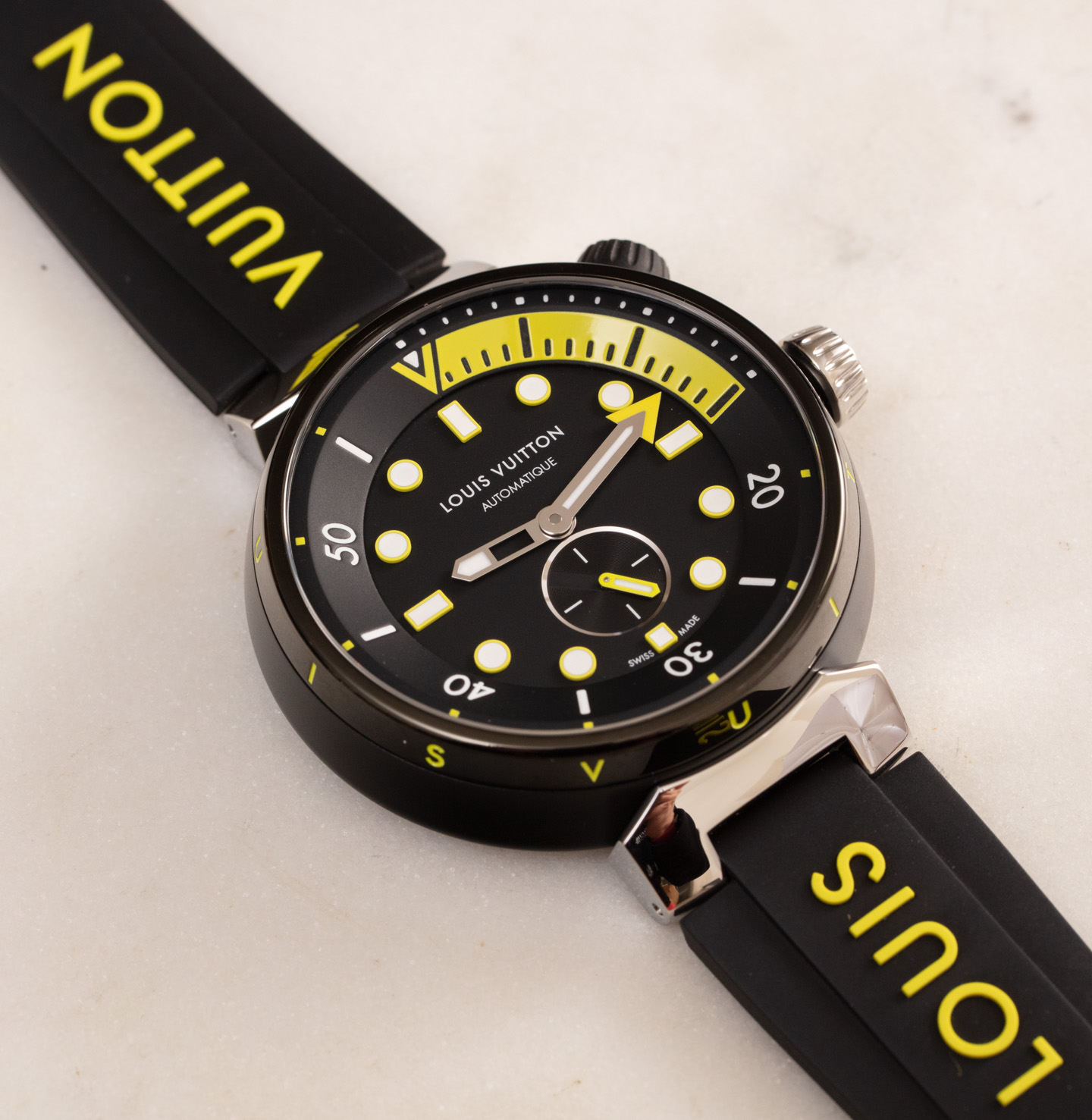 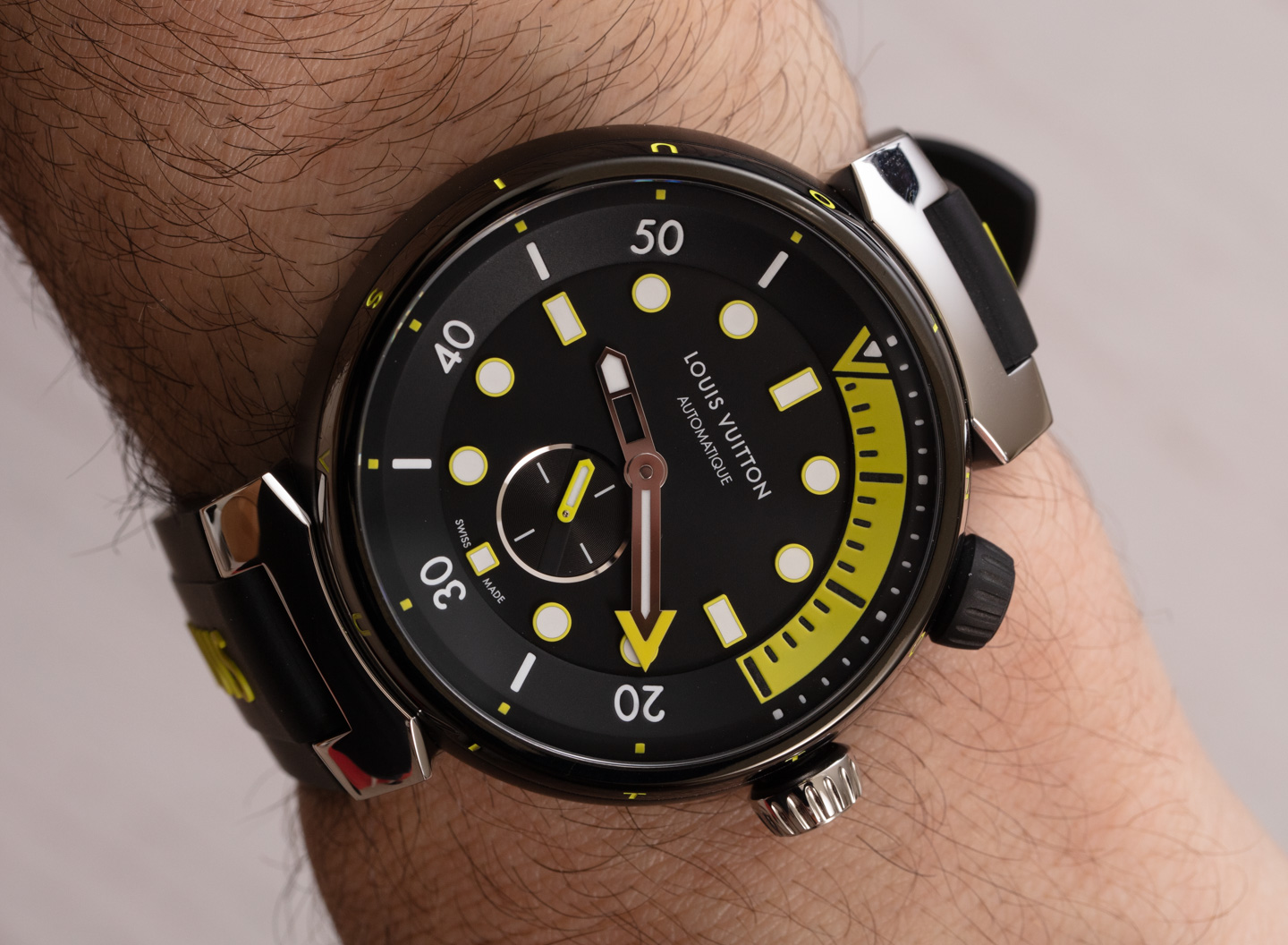