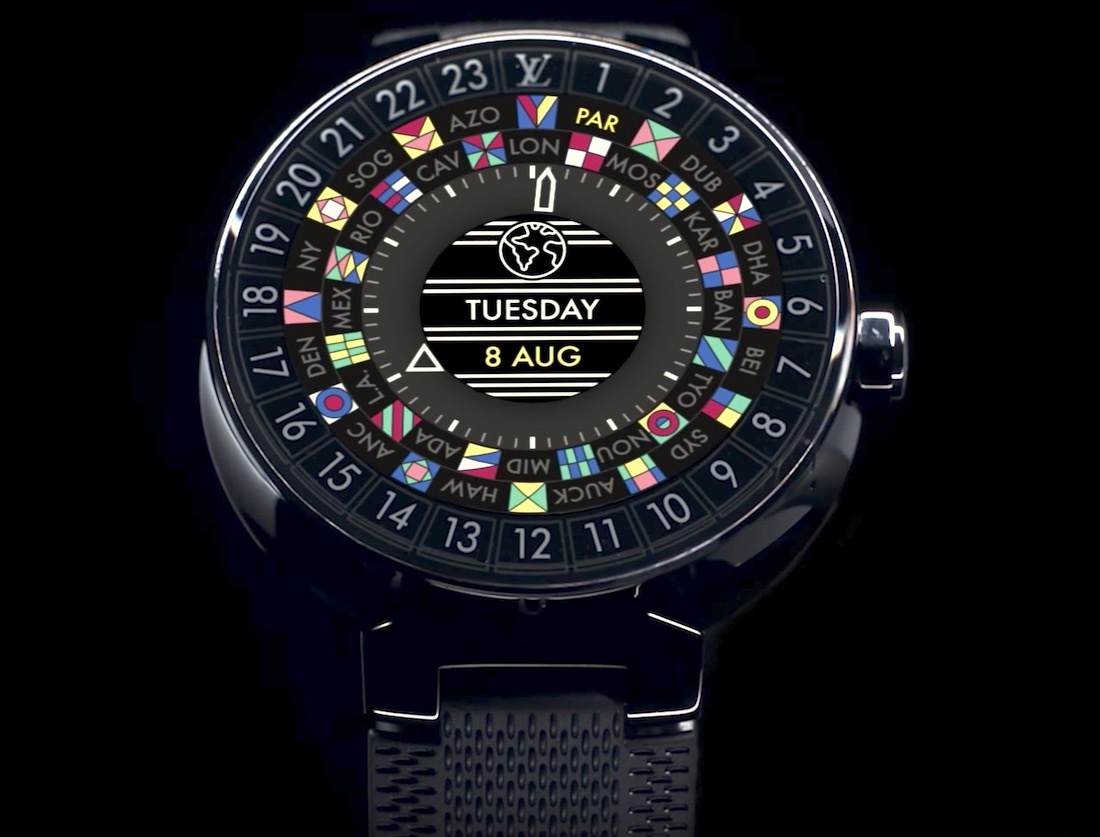 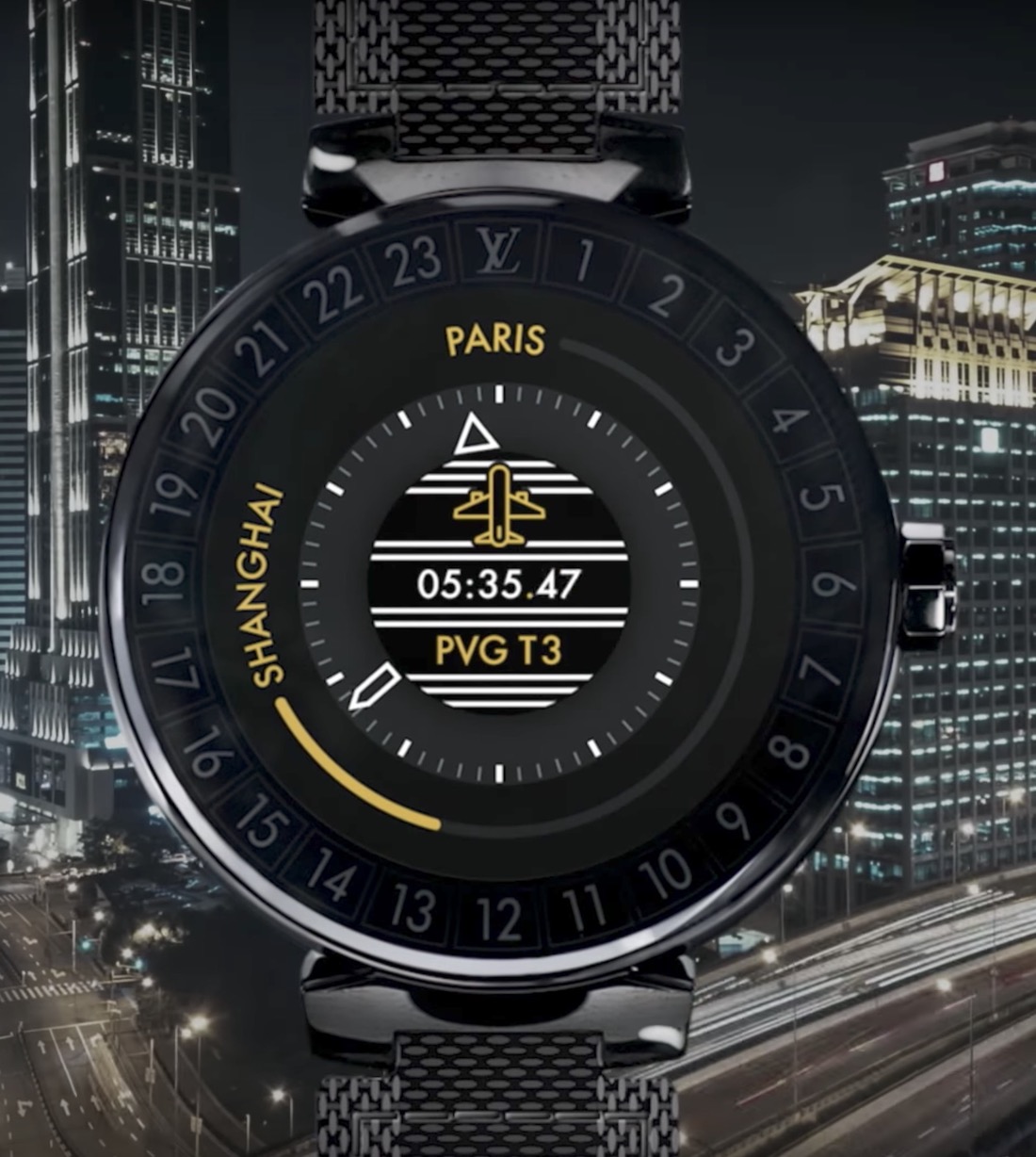 Michael Burke, chief executive of Louis Vuitton, told the New York Times that, in his view, when it comes to wearable technology “there’s a lot of ugliness out there. For us,” he said, “the aesthetic is nonnegotiable.” Okay, so, for a kick-off, there is a strong emphasis on aesthetics – and Louis Vuitton worked with the only watch design that they have working for them: the Tambour. 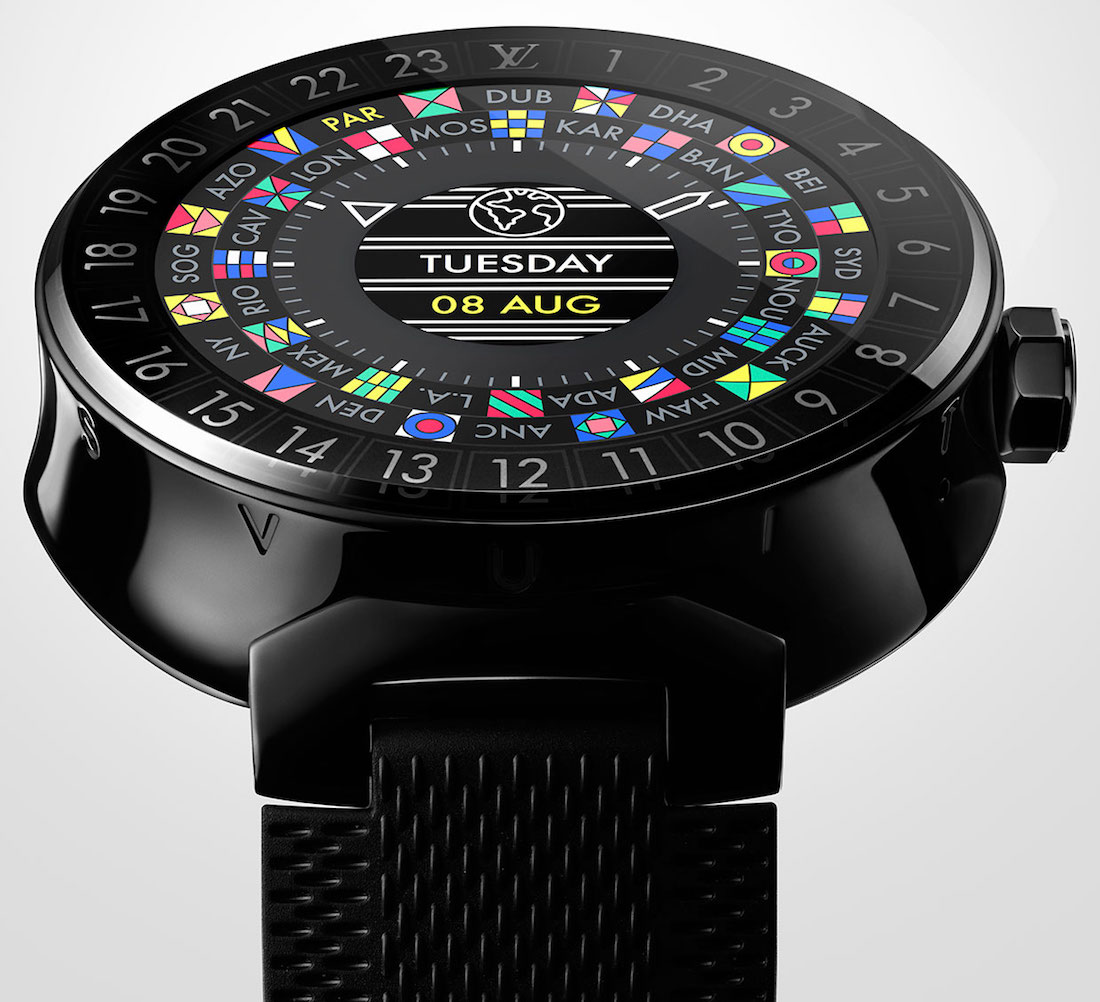 The Tambour got its name and case design from a traditional element in architecture, namely the upright part of a building on which a dome is raised. As far as watch design is concerned, this entails a case that is wider near the case-back than it is in the front. The Tambour Horizon incorporates recent updates to the design with the concave sides that the brand calls the Tambour Moon case. To see how it wears on the wrist, look forward to Ariel’s review of the Tambour Diver soon. 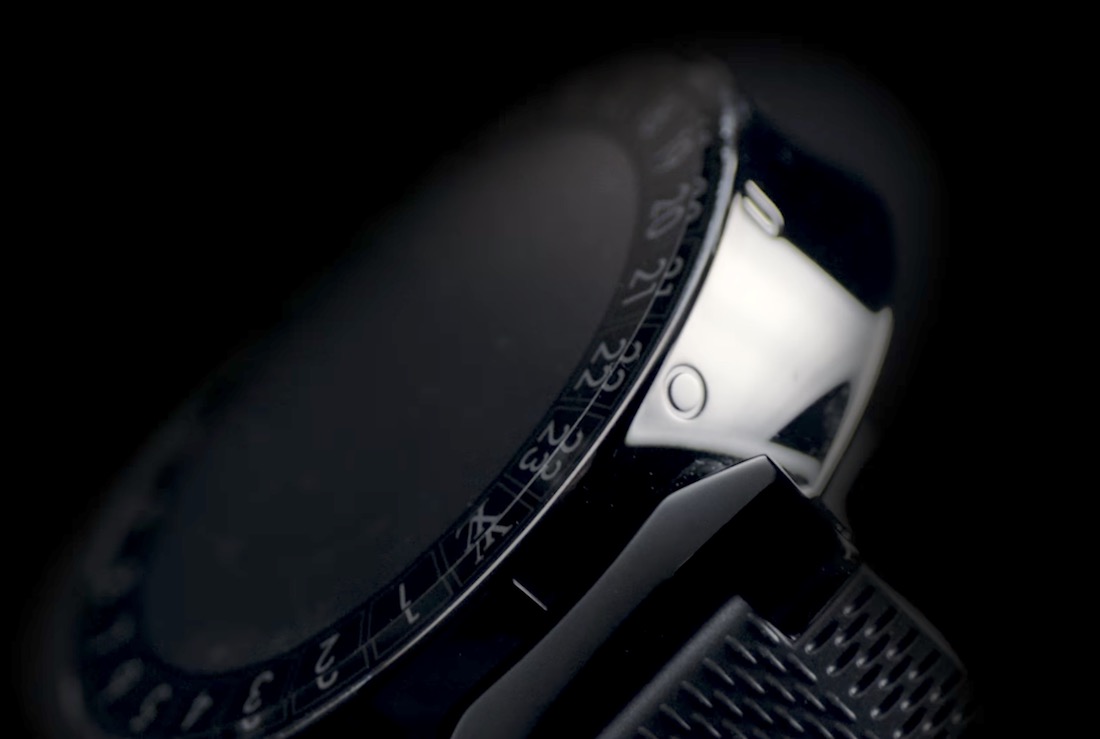 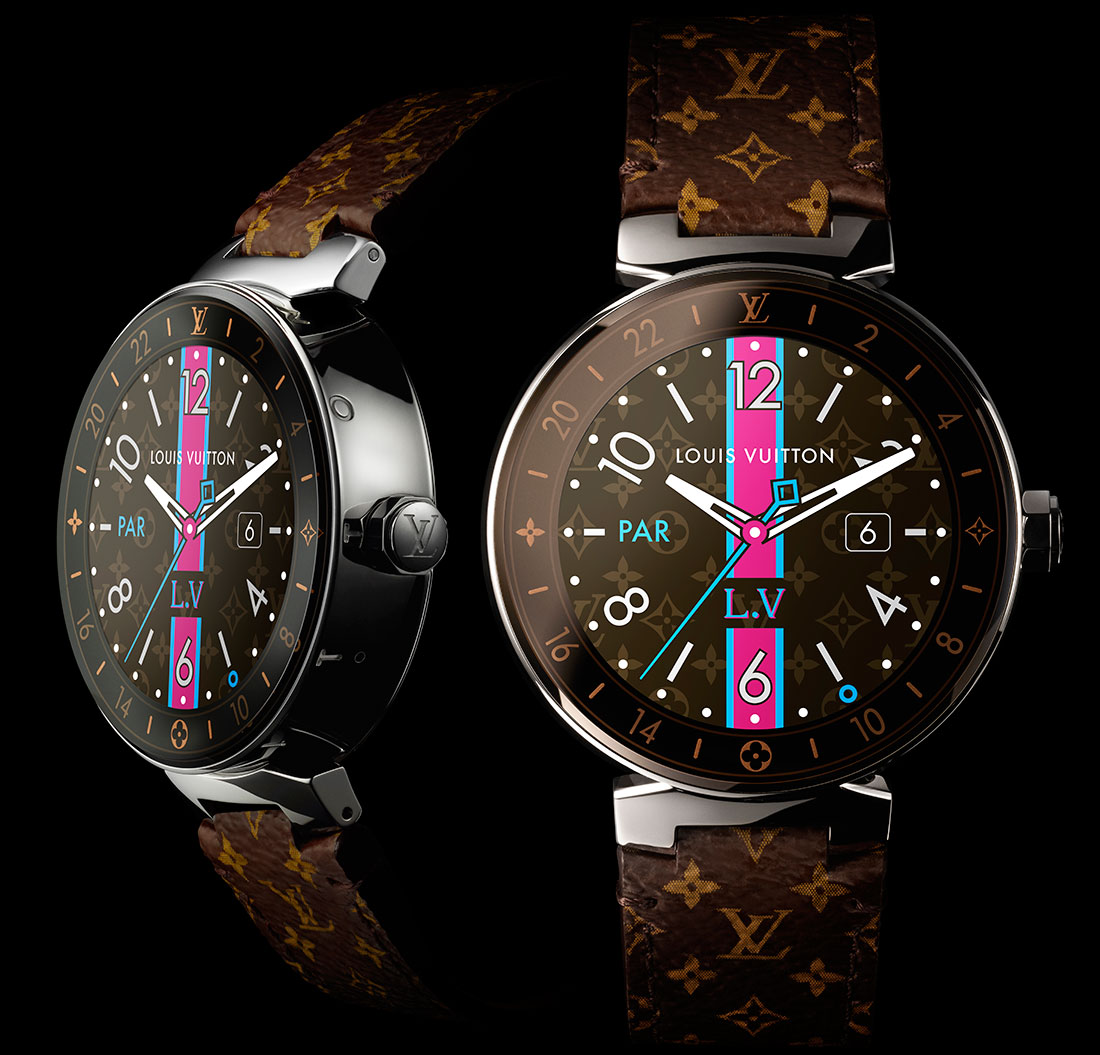 The Louis Vuitton Tambour Horizon is a refreshing 42mm wide and a very commendable 12.55mm thick – TAG Heuer’s Connected Modular 45 is 45mm wide and while it wears well, it is unquestionably large on the wrist, while Montblanc’s recently launched Summit is a massive 46mm wide and, what’s worse, is pretty much unwearably long unless you have extremely thick wrists. 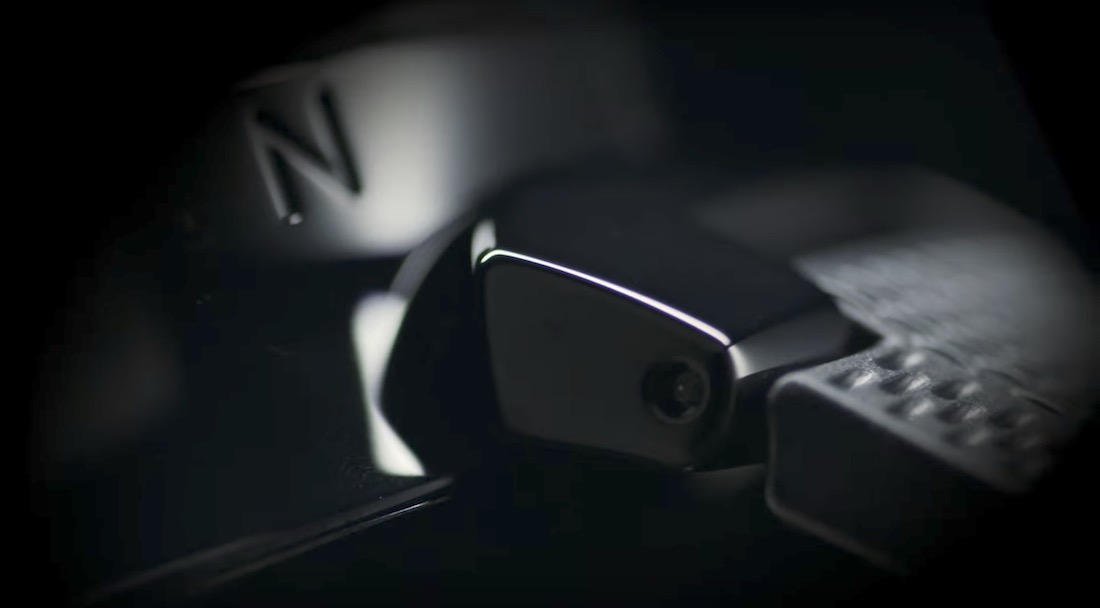 The 42mm diameter of the usually very comfy Tambour case sounds more than promising. The swiveling lugs are neatly integrated and should further enhance wearability, and for their short and articulated architecture, they don’t make the Tambour look unnecessarily long on the wrist. 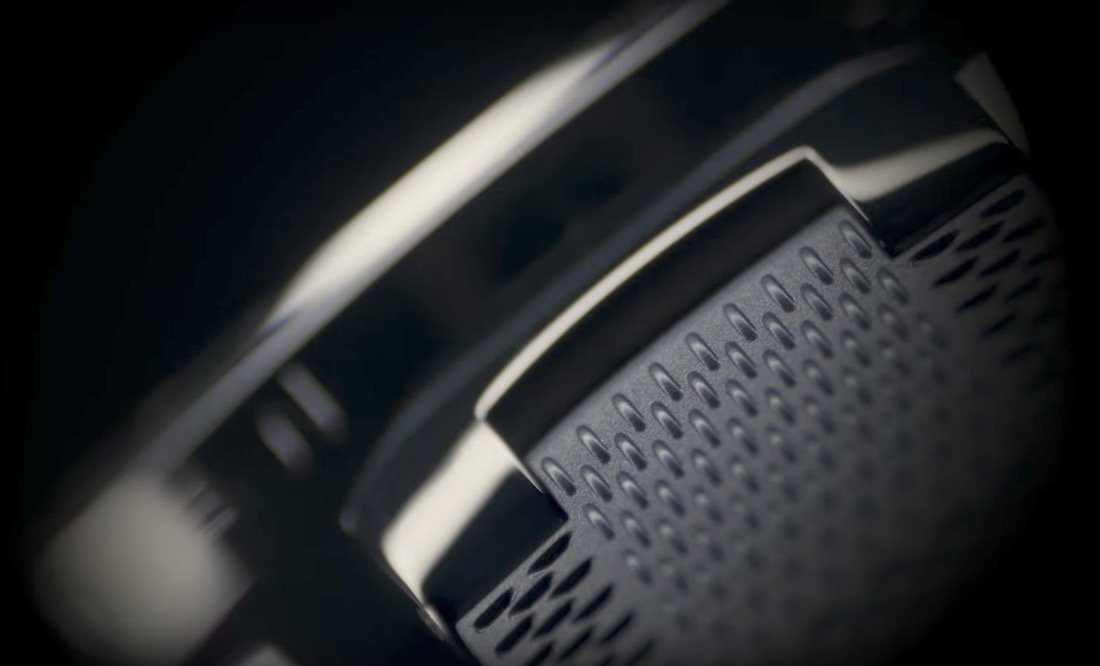 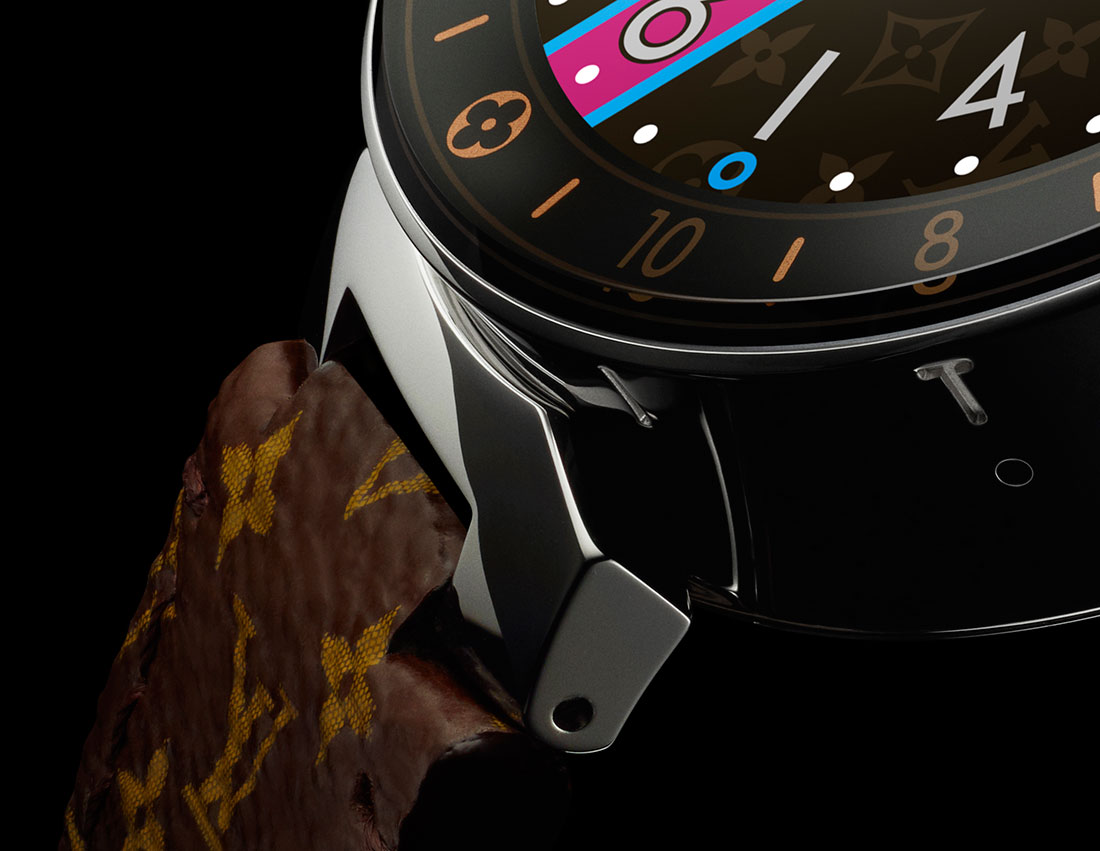 The case of the Louis Vuitton Tambour Horizon is either brushed or satin finished stainless steel with polished “horns” and crown, or a black PVD-finished stainless steel. Considering the near-$3k price point of the black version, we would hope it is of the more durable DLC kind. For both versions, the front is covered by a sapphire crystal with a fixed 24-hour flange ring underneath it. Water resistance is 30m – unlike most other smartwatches, Louis Vuitton has not provided an IP rating. 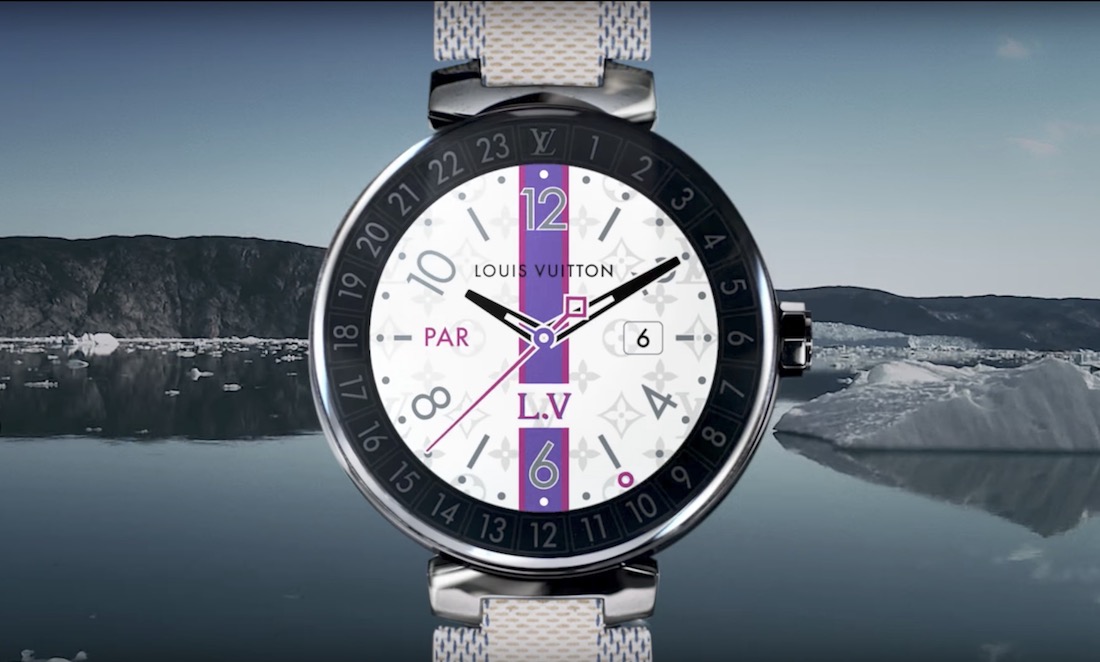 Ariel is in New York for the official launch of this piece and we will have his hands-on take on the new Louis Vuitton Tambour Horizon published soon enough, so for now let’s move onto the technical specs of this new and, truth be told, rather unexpected watch from Louis Vuitton. 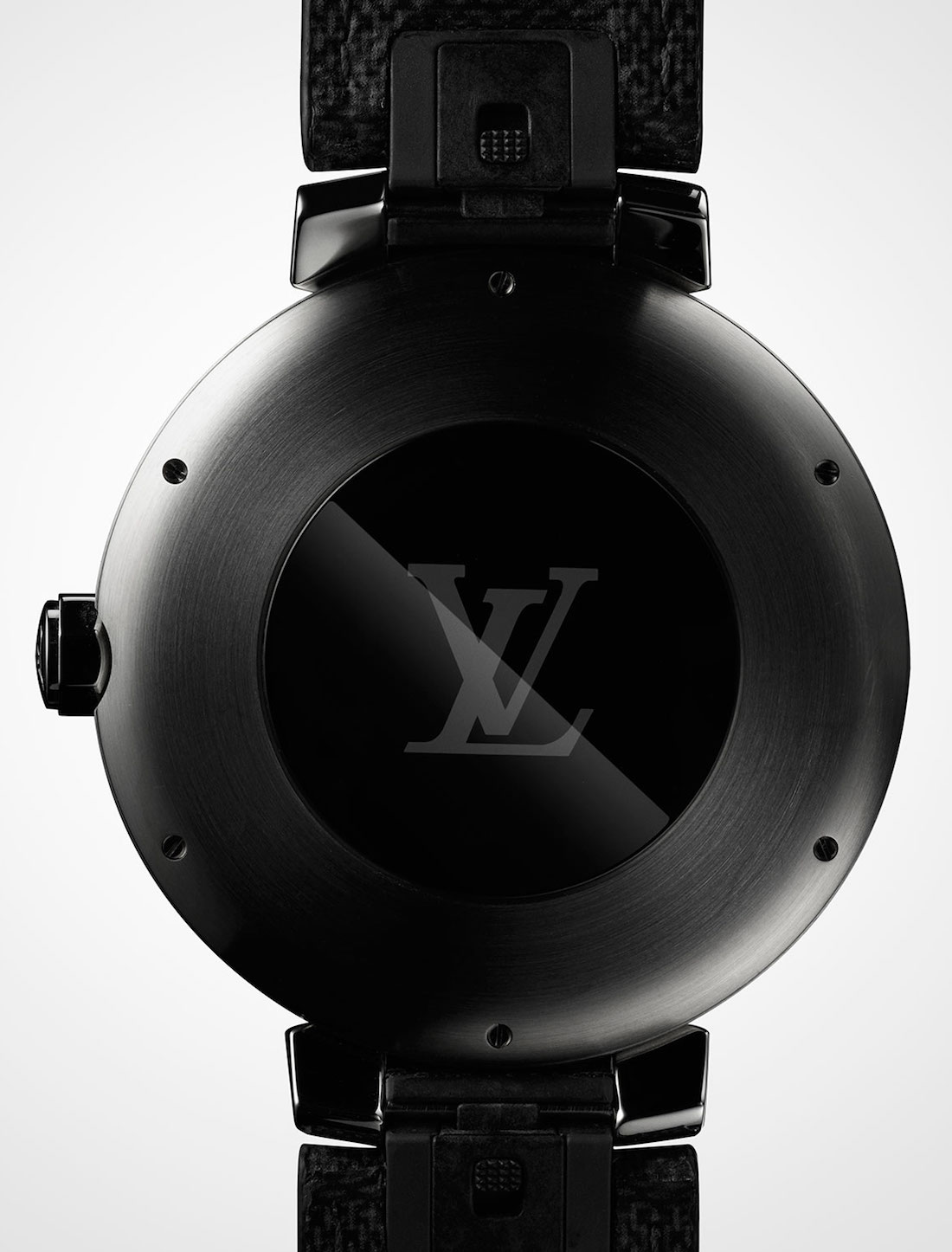 The Tambour Horizon is made in conjunction with Google and Qualcomm Technology, with a case made in Switzerland. TAG Heuer, also part of LVMH like Louis Vuitton, worked with Google and Intel so, apparently, Louis Vuitton’s smartwatch is not using the same technology or module as the TAG Heuer Connected Modular 45. We presume that is because of the Tambour’s smaller case size – TAG Heuer’s module, comprised of a battery, chip, and screen, could not fit into the smaller case that Louis Vuitton insisted upon for the Tambour Horizon. 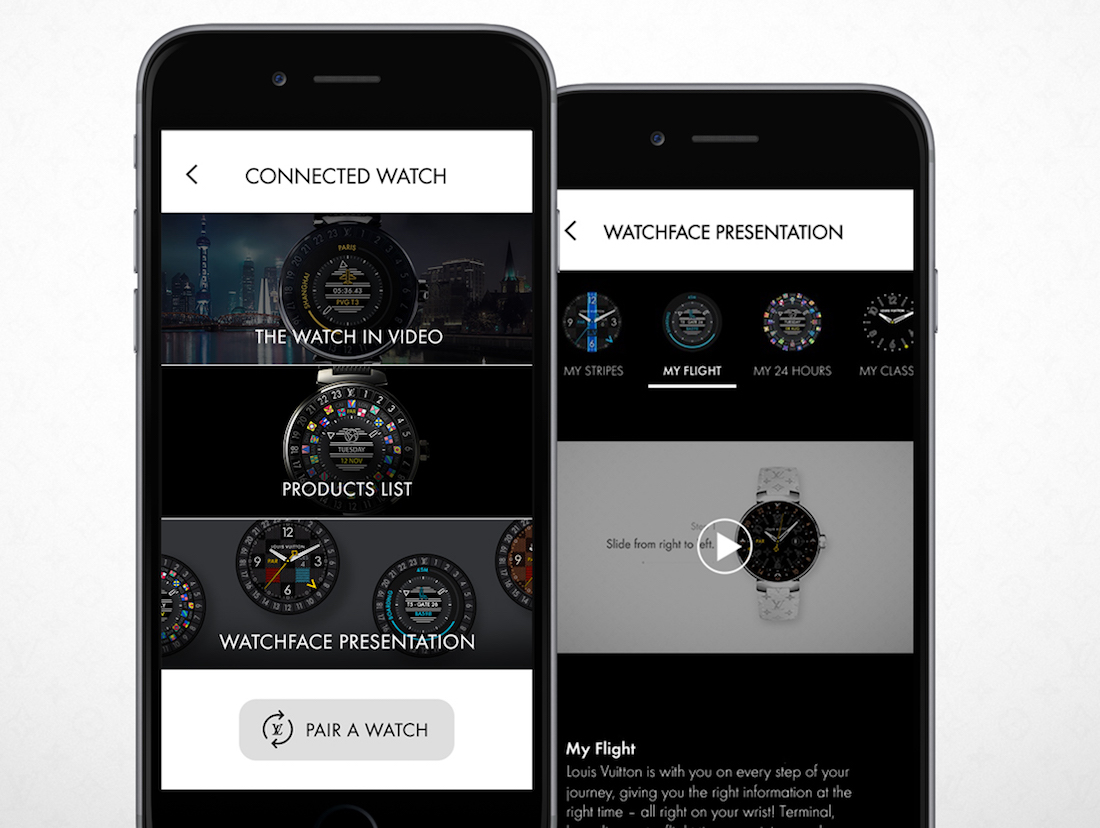 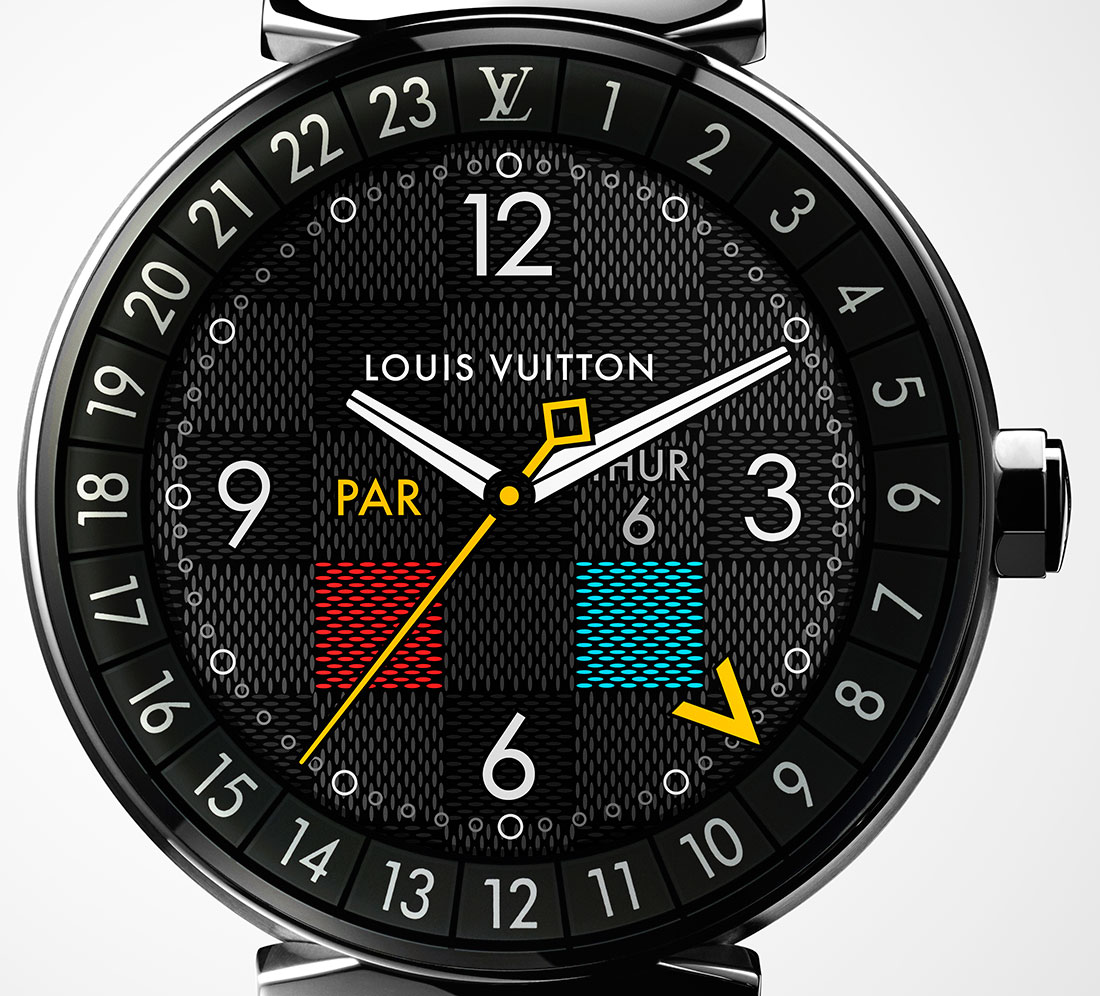 This noted, the Louis Vuitton Tambour Horizon runs on Android Wear 2.0 which renders it compatible with both Android (4.3 and up) and Apple iOS (version 9 and up) devices and, consequently, it does what most smartwatches do: it sends you email and text alerts, counts your steps, and has a variety of additional apps. By contrast, the Tambour Horizon does not contain a heart rate monitor, so it won’t be able to give you health warnings the moment you learn your flight just got delayed another two hours. 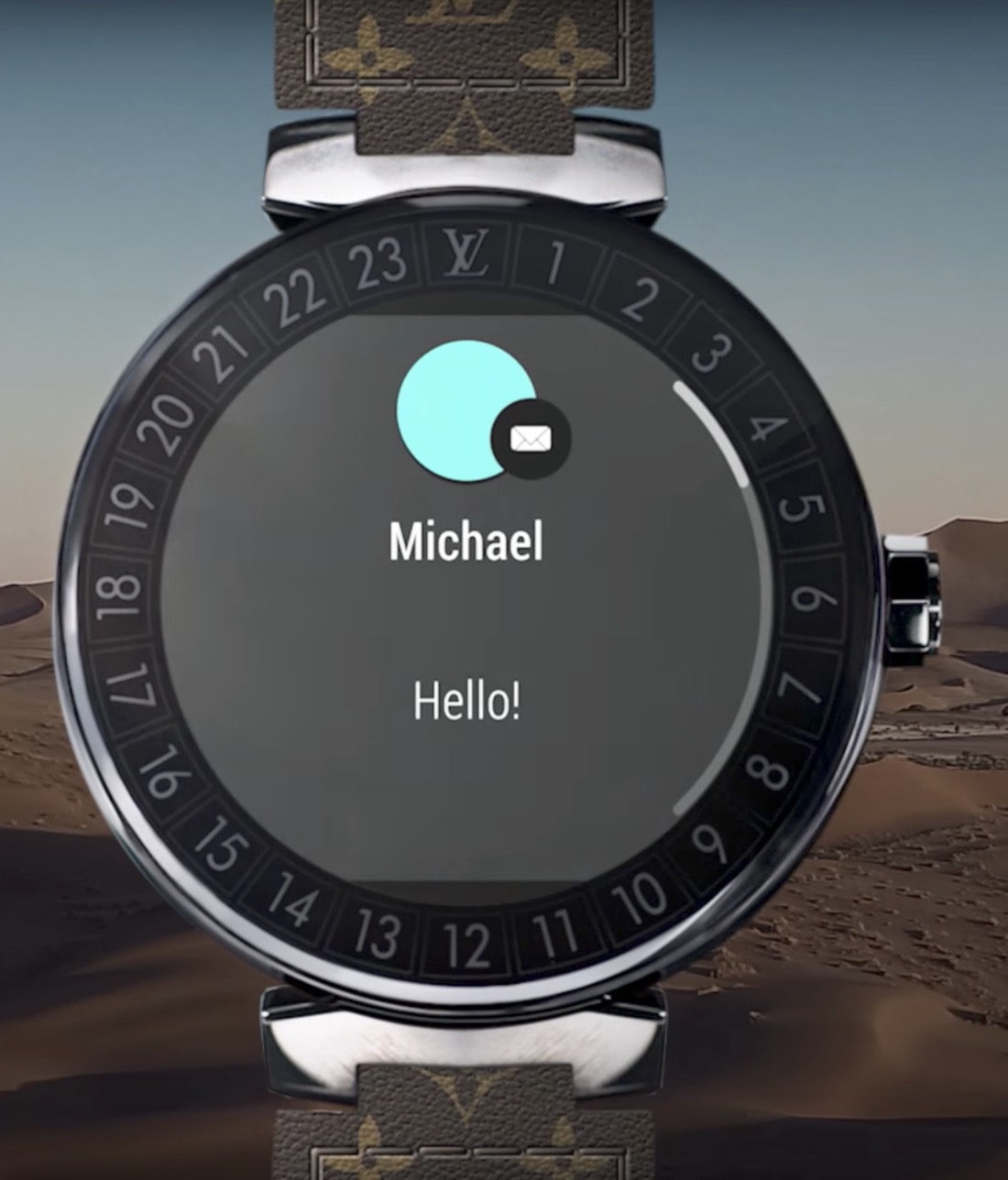 Speaking of traveling, that is the angle Louis Vuitton – who knows its customer base very well – has given to the Tambour Horizon. Once you decide to give it access to all your tickets, the LV Pass app (your typical travel app) will keep you updated on the progress of a flight, let you know of delays, wait times, and other related information. The NYT reports that Louis Vuitton has made special deals with local platforms like Weibo in China to ensure that their smartwatch continues to work when traveling to the People’s Republic. 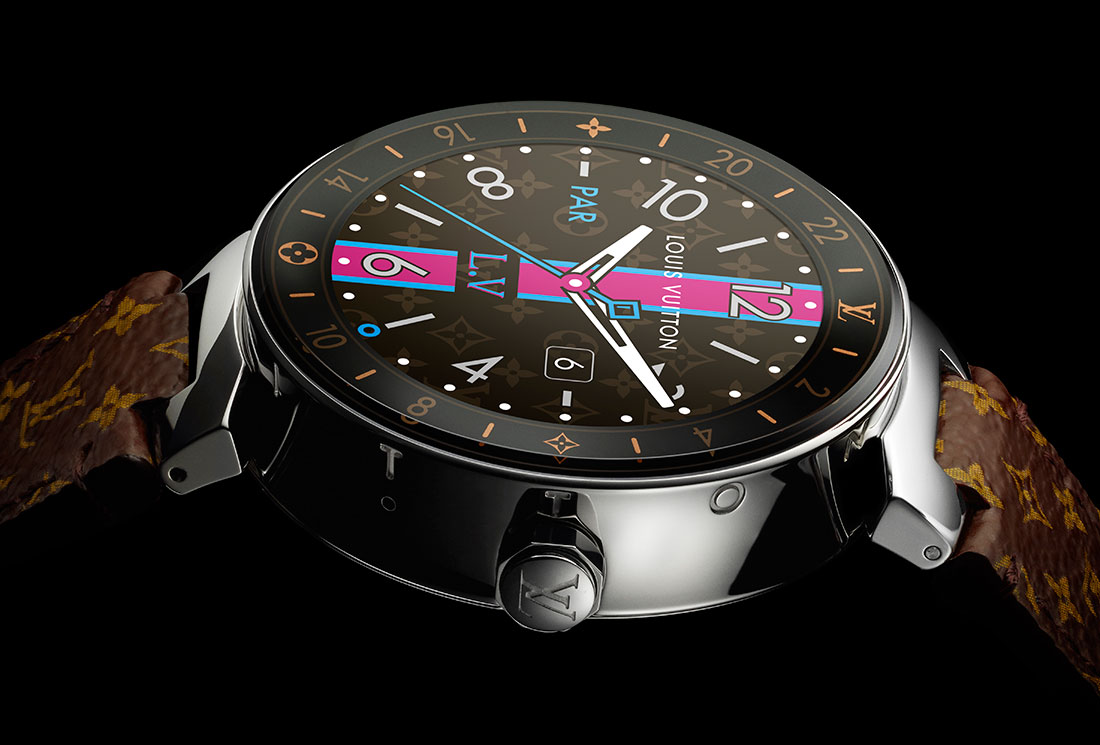 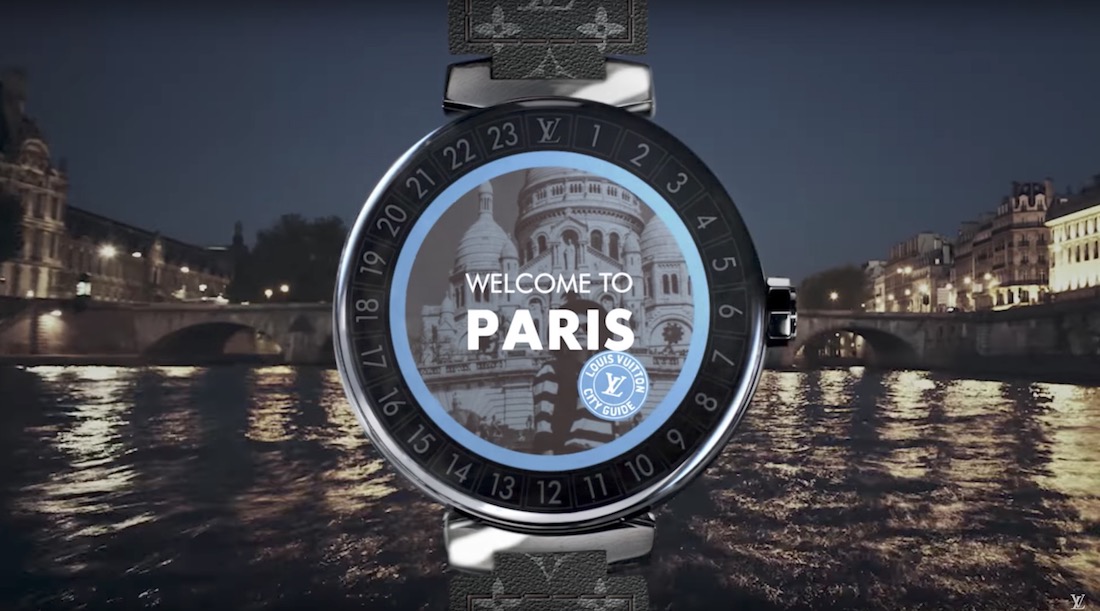 A concierge type of app is called Near Me / City Guide (the naming is rather confusing at this point) and it will work in major cities of the world to help you locate and gather information about nearby hotels, restaurants, and the like. How well it will actually work is yet to be seen, but given that it will rely on the accuracy of the information said venues make available about themselves, there may be some loopholes in the system. I expect it to be one of those apps that when it functions to design is a fantastic thing to have around but is rather frustrating when, for whatever reason that’s out of your control, fails to deliver the information you are after. 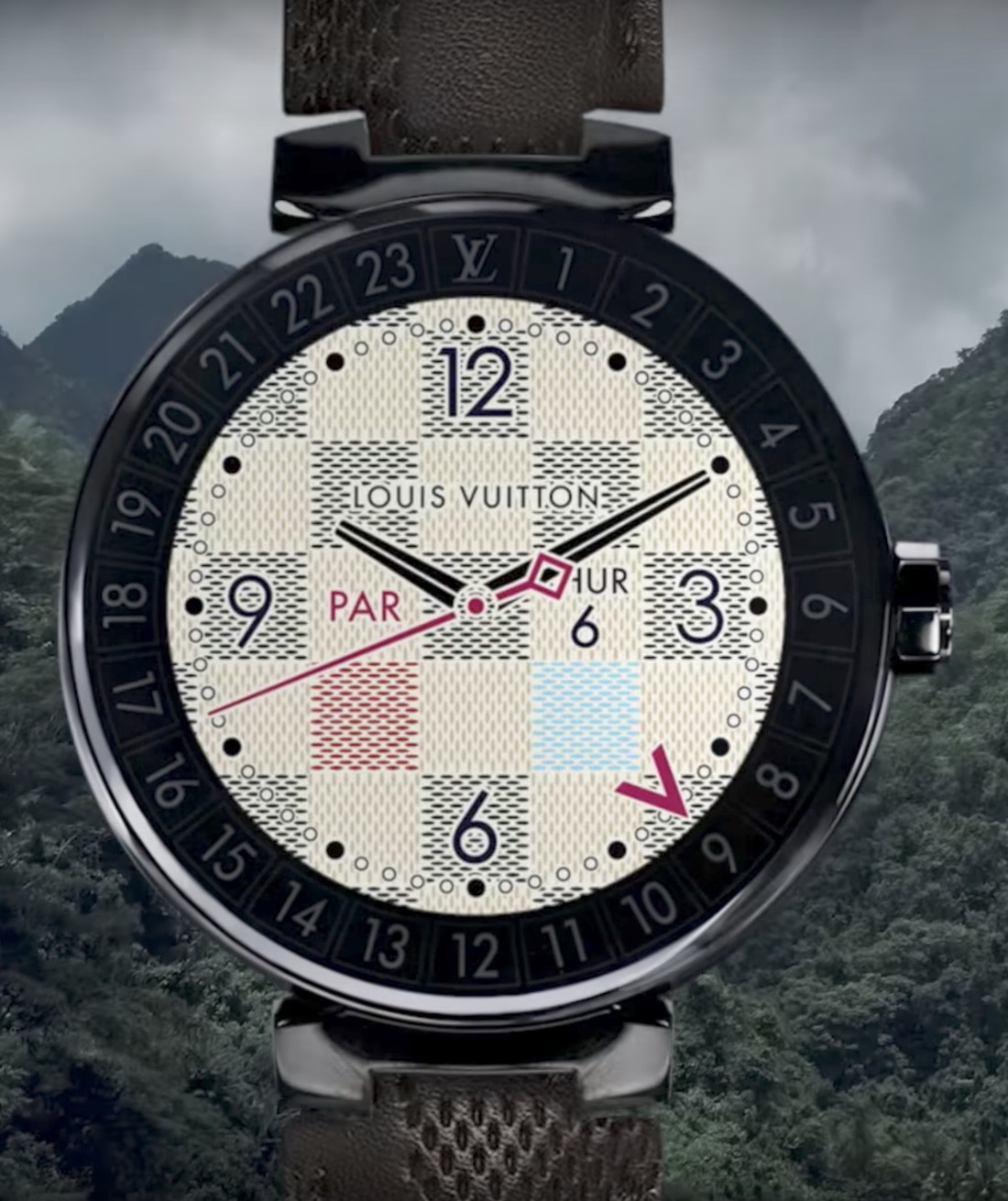 The Louis Vuitton Tambour Horizon has an AMOLED touch screen that should be bright and with vibrant colors, and with a resolution of 390 by 390 pixels, it isn’t pixel-city either. The screen does have an always-on mode, so that it provides basic information with little to no fancy animations and at a dimmed brightness, to save battery, but also to keep the watch from looking like a non-functional object when the screen is off. 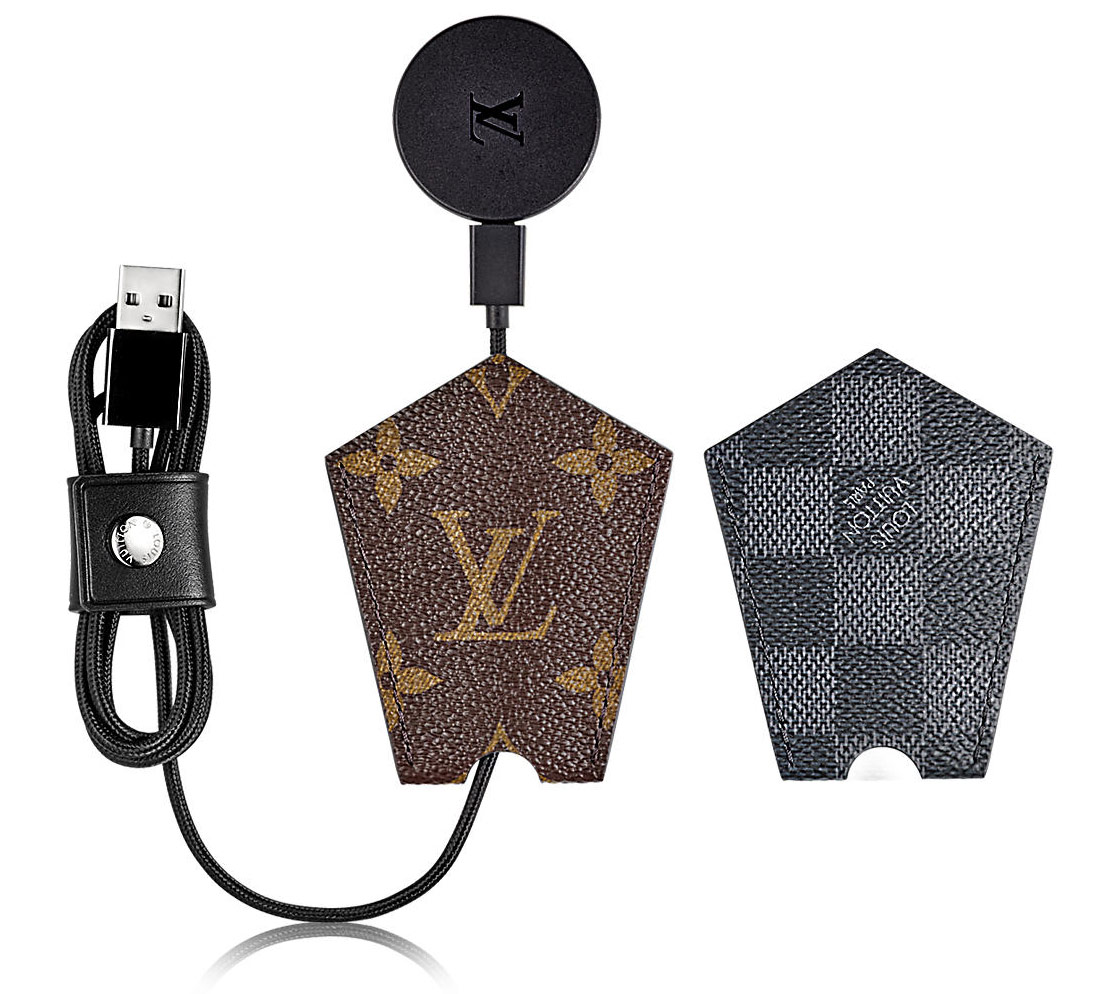 Battery life Louis Vuitton estimates to go “up to 22 hours” during normal usage and can be charged by a, well, very Louis Vuitton-style magnetic charger via the case-back. Though there is a step counter, without the heart beat sensor we expect this to be less of a fitness companion, and without that one extra sensor tapping into the battery’s reserves every so often, it shouldn’t be that much of a problem for the Tambour Horizon to make it through a day. 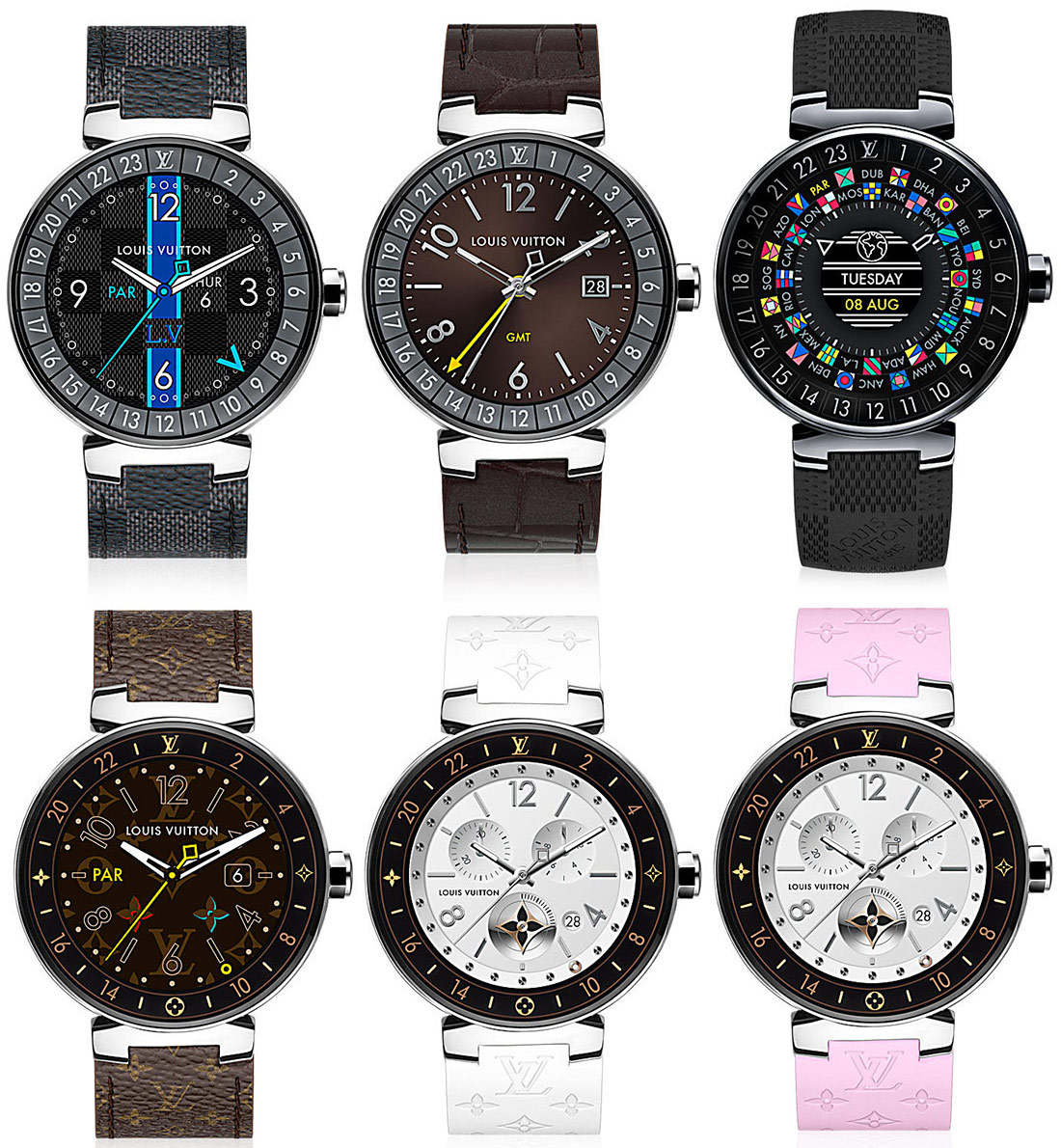 Customization options include a reported range of 30 men’s and 30 women’s strap styles as well as a multitude of dial options that are either inspired by previous Louis Vuitton watch dials or are completely new. Needless to say, more dial options will be available for download later on. Pricing for the Louis Vuitton Tambour Horizon smartwatch in steel starts at $2,450, while the black variant will retail for $2,900. To give you some context, the TAG Heuer Connected Modular starts at $1,650 and goes up to $6,700 with diamonds (and $17,000 with a mechanical tourbillon watch-head on the side), while the Apple Watch Sport retails for $269, with the Hermès collaboration variants starting at $1,149.

We end this quick run-down here as Ariel will be back with a hands-on take on the new Louis Vuitton Tambour Horizon very soon. louisvuitton.com