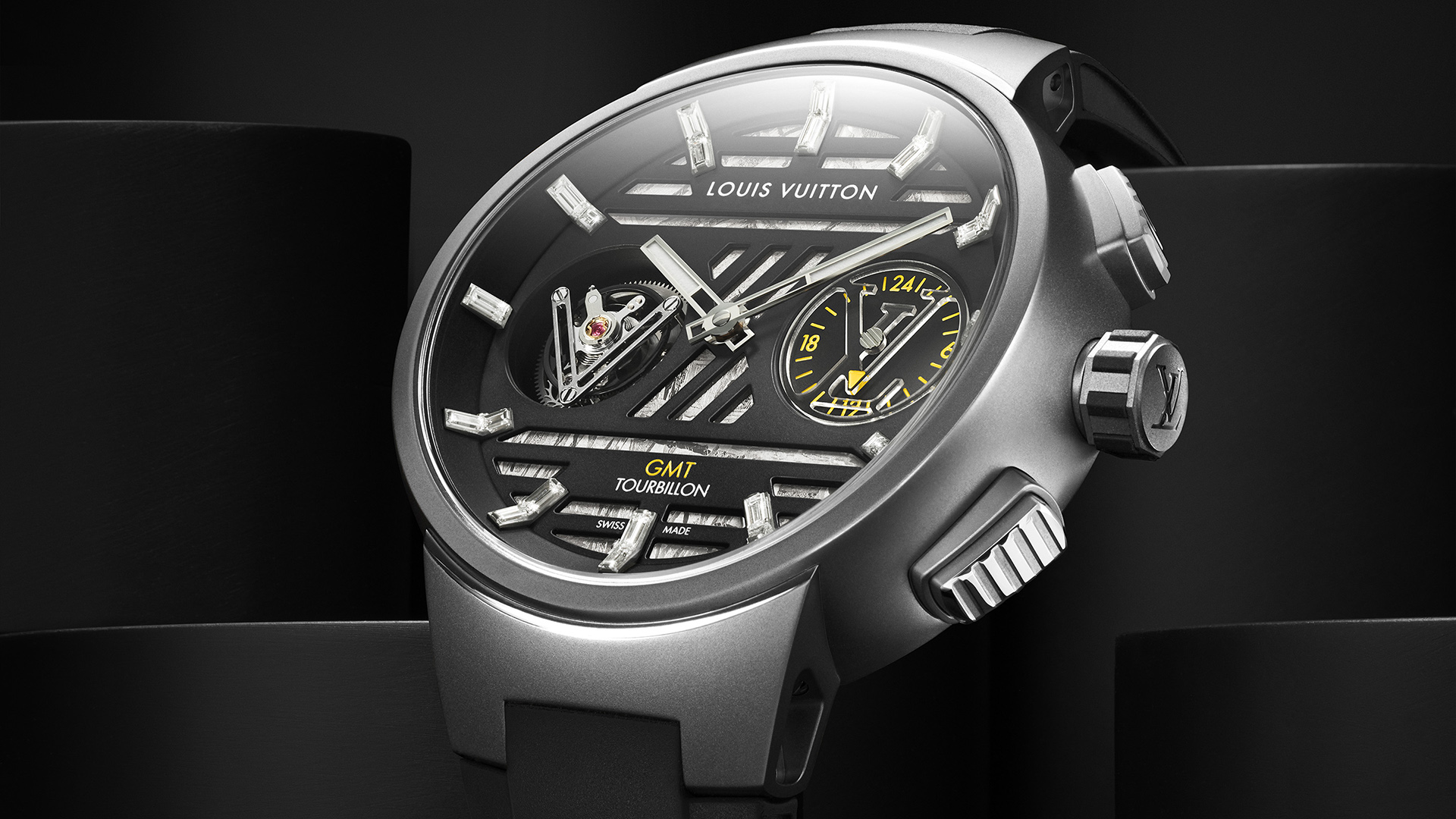 2021 has so far been an aggressive year of releases for the luxury watchmaking arm of fashion giant Louis Vuitton. The brand’s core Tambour line has been reimagined as everything from a streetwear-influenced diver-style watch to a high-concept statement piece this year, but perhaps the most impressive from a sheer watchmaking perspective is the brand’s new Tambour Curve GMT Flying Tourbillon. Seemingly aimed squarely at the wealthy traveling fashionista, the fully in-house design offers a lithe Parisian take on the modern GMT sports watch with both a prominently displayed flying tourbillon and a trio of distinct stylistic interpretations. The new Louis Vuitton Tambour Curve GMT Flying Tourbillon continues the brand’s trend of dancing to its own unique drum, creating a genuinely impressive piece of high watchmaking in an inimitable Louis Vuitton suit. 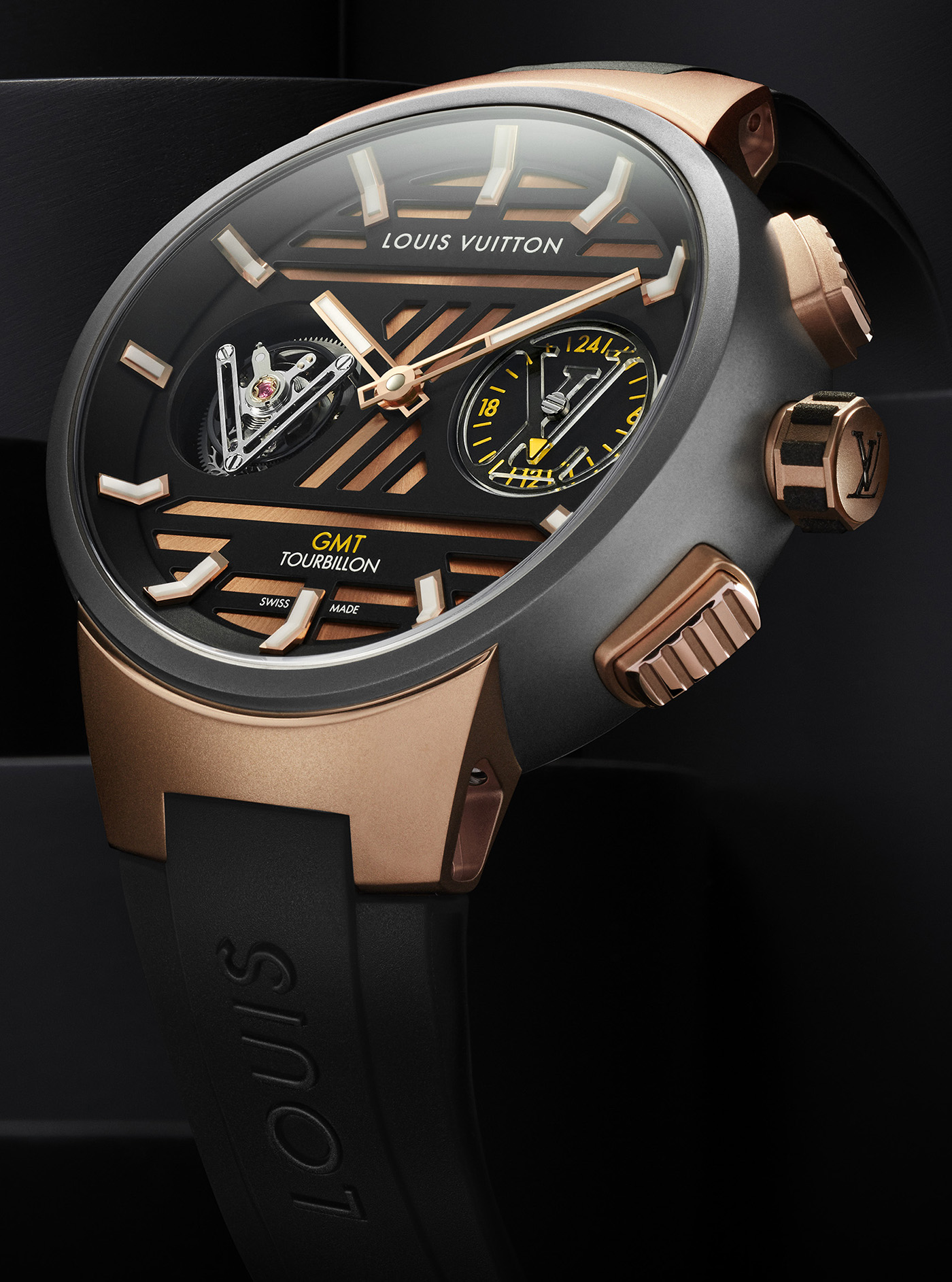 There’s no getting around the fact that the Louis Vuitton Tambour Curve GMT Flying Tourbillon is a hefty watch. The tapering drum-inspired central case, a staple of the Tambour line since its inception in 2002, measures in at a diameter of 46mm, with a wide base that may potentially make the watch feel ungainly on the wrist. This case, with its streamlined semi-integrated attached lug assembly, is available in either a full-shot blasted Grade 5 titanium finish or a mix of black-coated titanium and 18k pink-gold accents for a more luxurious look. The simple form of the rounded, smooth case design draws added attention to the details, and Louis Vuitton imbues these models with small touches of refined functionality. The crown and tapering rectangular pushers both feature small ridged segments to aid grip, giving these elements a sporty feel. While rubberized ridges like those on the crown are usually used for easy handling in wet environments, however, the Tambour Curve GMT Flying Tourbillon is decidedly not ready for water activity with a water resistance of only 50 meters. That said, the inclusion of pushers into this GMT design adds an easy and useful on-the-fly adjustment of the 24-hour second time zone hand. 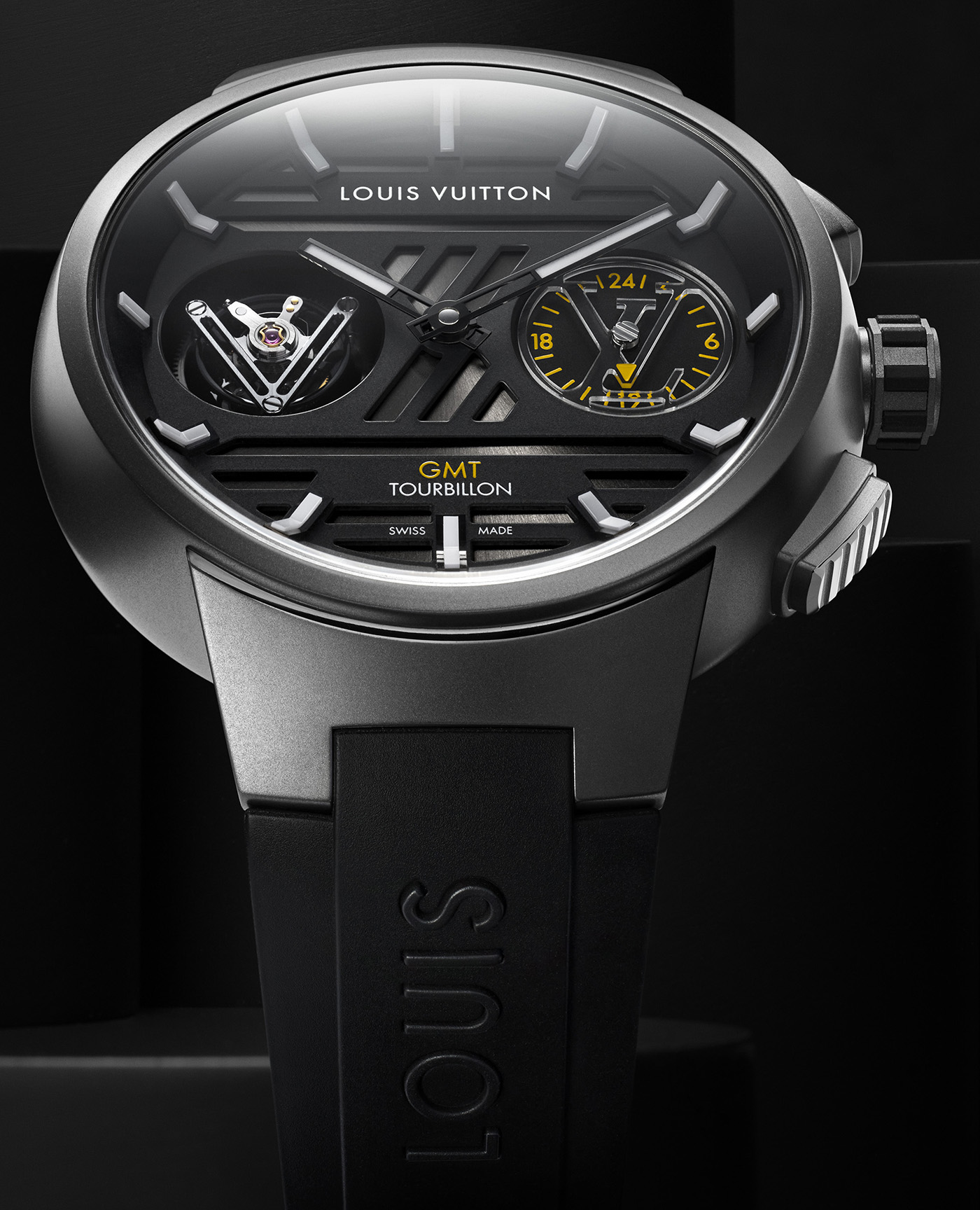 The layered cutout dial designs of the Louis Vuitton Tambour Curve GMT Flying Tourbillon offer a delicate visual balance of modernism and masculinity, without coming off as aggressive. All three dial variants follow the same formula, with a matte black main surface cut through in stripes to reveal a contrasting layer through the “Venetian blinds” and stylized hourglass motif. The sloping applied indices bridge the gap between this dial surface and the steep rehaut and feature applied blocks of solid Super-LumiNova rather than the more common painted application. Although this isn’t exactly a minimal dial design by any means, the real depth of visual detail on these dials shines through in the GMT subdial and flying tourbillon window. A flying tourbillon becomes the visual centerpiece of nearly any watch that features one, and the balanced approach Louis Vuitton takes to incorporating this element into the dial allows the horology to speak for itself rather than needlessly forcing the eye towards the display. It’s a clean and confident execution, but not without a Louis Vuitton flourish in the V-shaped skeleton tourbillon cage. The brand’s classic “LV” branding is slickly integrated into the 3 o’clock GMT subdial as well, as the hand for this display is a sapphire LV emblem with a yellow pointer forming the tip of the V. This bold yellow accent on the GMT hand, as well as the matching yellow 24-hour scale, injects a further sense of modern sporting energy into the overall design. From this point, the three variants diverge, with the core titanium model accenting the matte black top layer with a cutout lower dial layer in sunburst black. This is likely to be a subtler effect on the wrist than the pink gold cased model, which brings a matching pink gold sunburst layer to the design. Lastly, the titanium case variant can also be optioned with a lower dial layer in bright and dynamic meteorite. While most brands are vague about the origins of meteorite dial materials beyond the obvious answer of “outer space,” Louis Vuitton takes this material as an opportunity for product storytelling. The brand claims this meteorite sample is from the Gibeon meteorite in Namibia, sought after by jewelers for its unique pattern and which the native Nama people have used to make tools for generations. To accentuate this extraterrestrial material, Louis Vuitton replaces the applied indices for this model with baguette-cut diamonds. 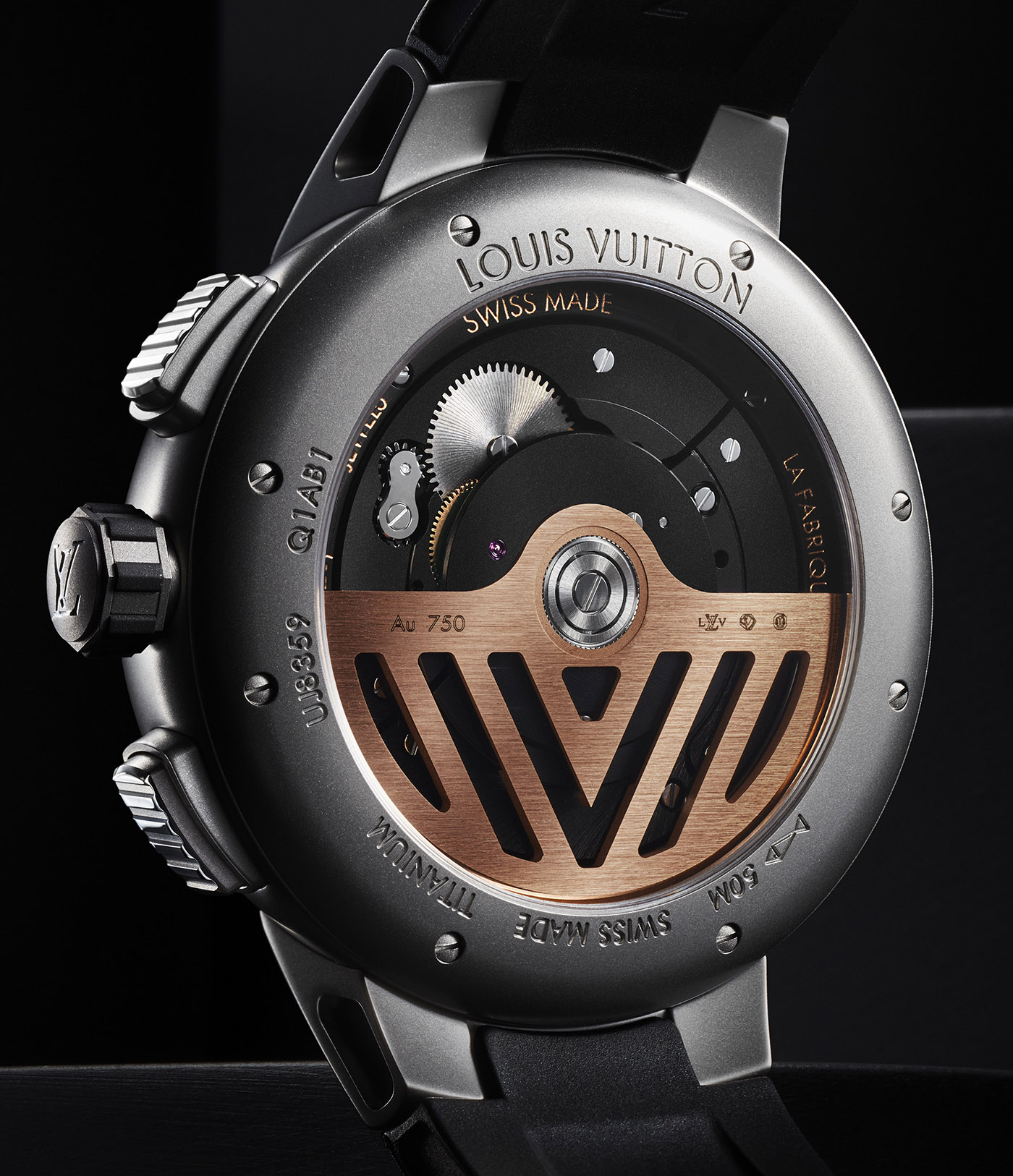 Louis Vuitton powers the Tambour Curve GMT Flying Tourbillon with its in-house LV 82 automatic flying tourbillon GMT movement. Overall finishing for this movement is clean and modern, with matte black full bridges topped by a skeletonized pink gold rotor. Performance for the LV 82 is robust, with a 65-hour power reserve at a 28,800 bph beat rate. All three variants in the Tambour Curve GMT Flying Tourbillon series are paired with Louis Vuitton’s signed black rubber strap to reinforce the futuristic and sporty ethos of the design. 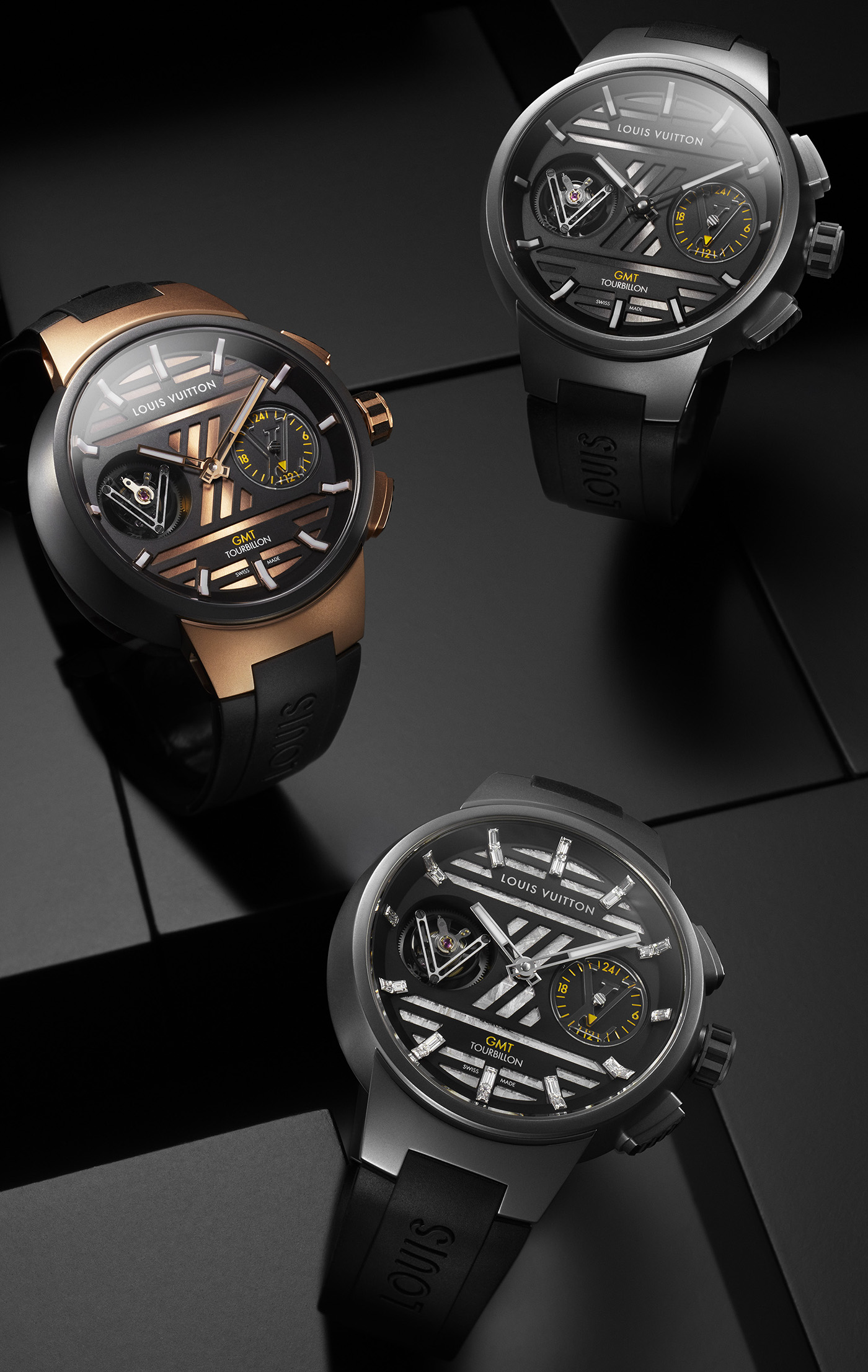