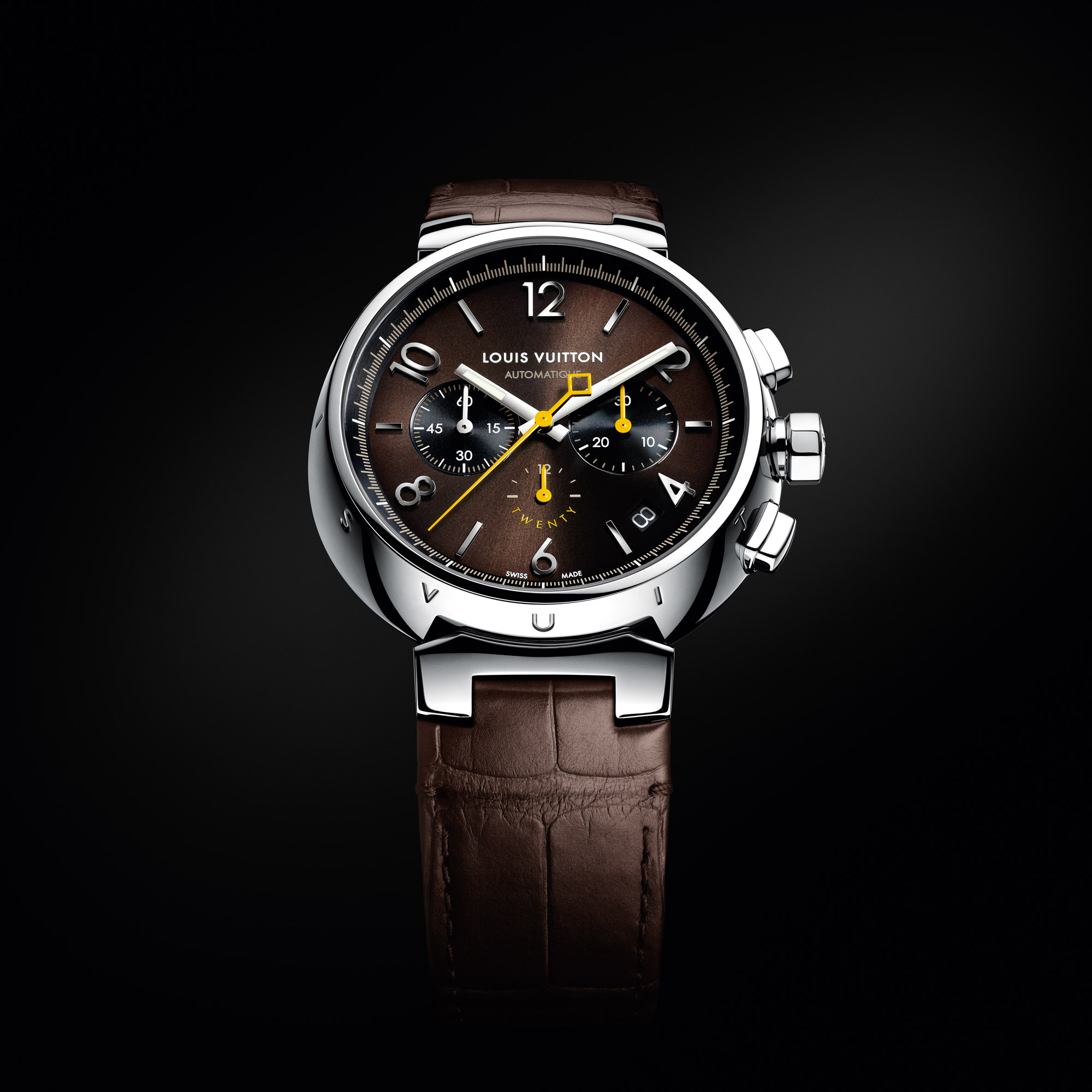 Outside of watches, specifically, when it comes to internationally renowned luxury brands, Louis Vuitton is easily on the shortlist of the most famous names in the entire world. With that in mind, although the brand itself has been around since 1854, it only first started producing watches two decades ago with the 2002 launch of the Louis Vuitton Tambour, which featured a unique case shape that drew its aesthetic inspiration from a drum, hence its name (“tambour” means “drum” in French). Over the years, the Tambour’s unique silhouette has become one of the designs most representative of Louis Vuitton as a watch manufacturer, and it has served as the basis for a number of different models that span everything from divers and connected watches to ultra-thin editions, a flying tourbillon, and everything in between. To celebrate twenty years of Louis Vuitton watchmaking, the brand is releasing the Tambour Twenty as a limited edition of 200 pieces that celebrates the 20th anniversary of Louis Vuitton’s very first watch. 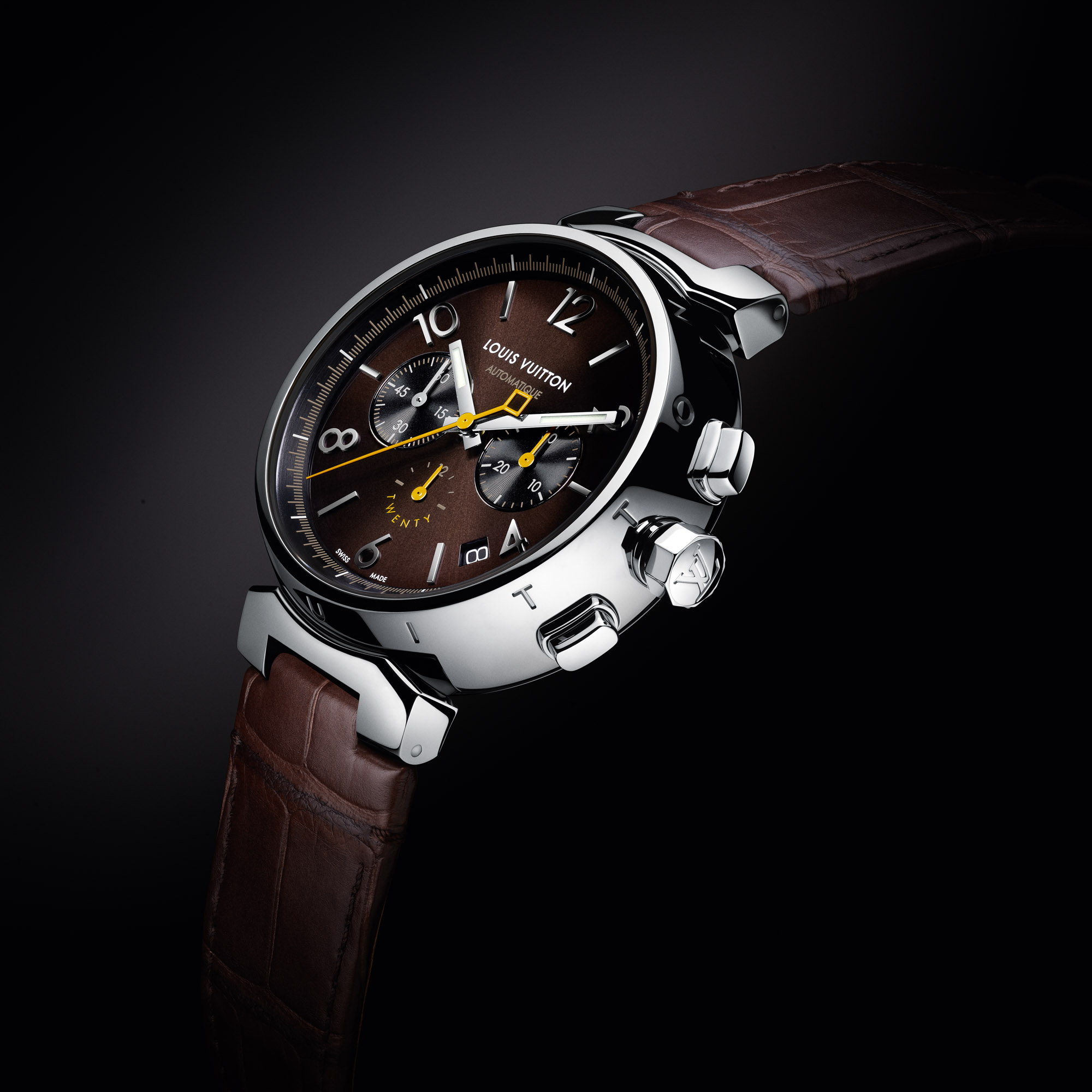 The case of the Louis Vuitton Tambour Twenty is crafted from stainless steel, and it measures 41.5mm in diameter by 13.2mm thick with a flat anti-glare coated sapphire crystal fitted on top to protect the dial. The overall profile of the watch is immediately identifiable as being from the Tambour collection, with its round shape that features flared sides and applied horn-shaped lugs that are connected to either side of a dark brown alligator leather strap. The case itself features entirely high-polished surfaces, and just like the original model from 2002, the circular side of the case is engraved with the words “Louis Vuitton” — with each of the twelve letters placed adjacent to one of the hour markers on the dial. An octagonal winding crown signed with the brand’s interlocking “LV” logo sits at the 3 o’clock position, and it is flanked by two rectangular pill-shaped pushers that offer access to the model’s chronograph functions. The rounded stainless steel caseback features a large sapphire display window that offers a view of the internal movement, and the caseback itself is attached by six small screws to help provide the Tambour Twenty with 100 meters of water resistance. 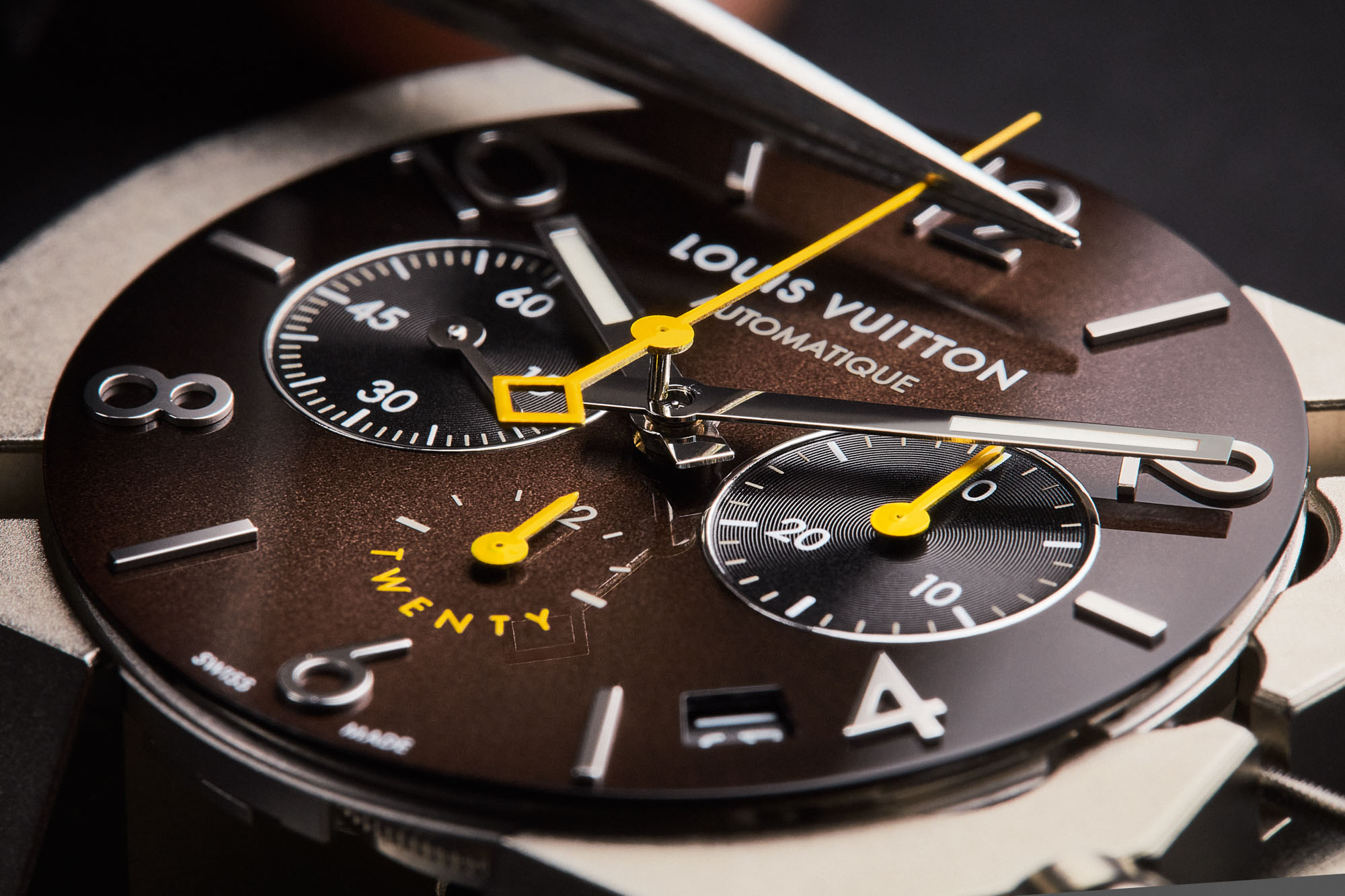 The dial of the Louis Vuitton Tambour Twenty features a brown sunray surface, which houses a pair of black snailed counters and polished applied hour markers that consist of a mix of batons at the odd numbers and Arabic numerals for the even ones. A pair of centrally-mounted hour and minute hands display the time with an accompanying running seconds indicator appearing within the sub-dial at the 9 o’clock location. The other black snailed sub-dial at the 3 o’clock position houses the minute counter for the chronograph, with the 12-hour totalizer for the chronograph appearing at 6 o’clock with the word “Twenty” occupying the lower half of its scale in bright yellow letters. A date window with a white-on-black calendar disc appears at the ever-controversial 4:30 position, and both the minute hand and the centrally-mounted chronograph seconds hand are finished in a matching bright yellow color as reference to the thread that was historically used in traditional leatherwork. 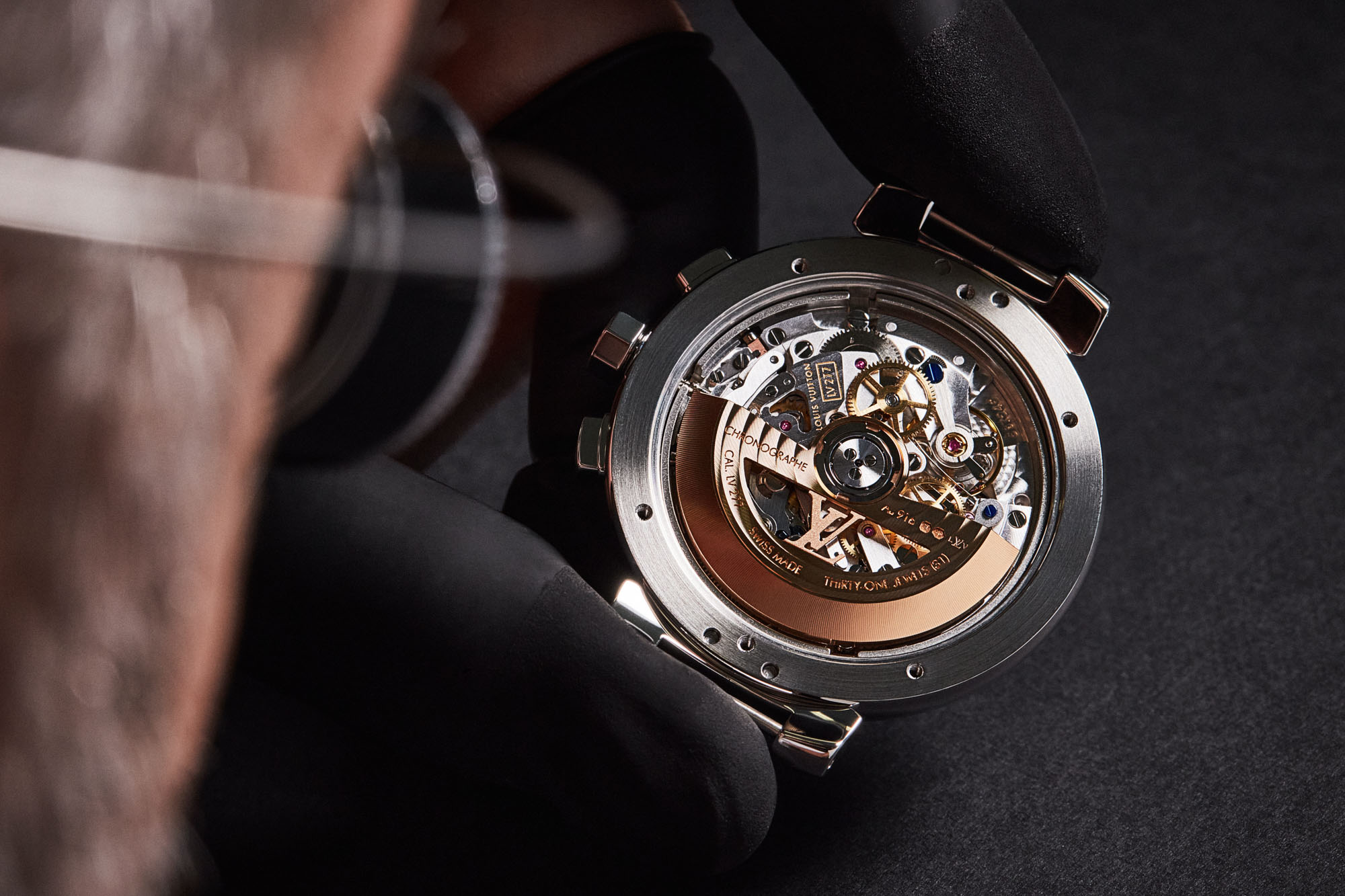 Although Louis Vuitton is first and foremost a luxury fashion brand, the movement powering the new Tambour Twenty is a significant step in the horologically -minded direction compared to the various off-the-shelf calibers that frequently get selected to power timepieces produced by other big-name fashion brands. Just like many famous watch manufacturers, Louis Vuitton is owned by LVMH and therefore benefits from access to certain movement technologies. Based on the legendary Zenith El Primero, the Caliber LV 277 automatic movement inside the Louis Vuitton Tambour Twenty is a high-frequency chronograph that runs at a rate of 36,000vph and offers users a power reserve of approximately 50 hours. While the movement itself relies on Zenith’s original pioneering technology, the self-winding Cal. LV 277 chronograph is manufactured and assembled in-house by Louis Vuitton’s La Fabrique du Temps workshop, and it is fitted with a 22-carat pink gold oscillating weight, with the entire movement visible through the sapphire window in the caseback 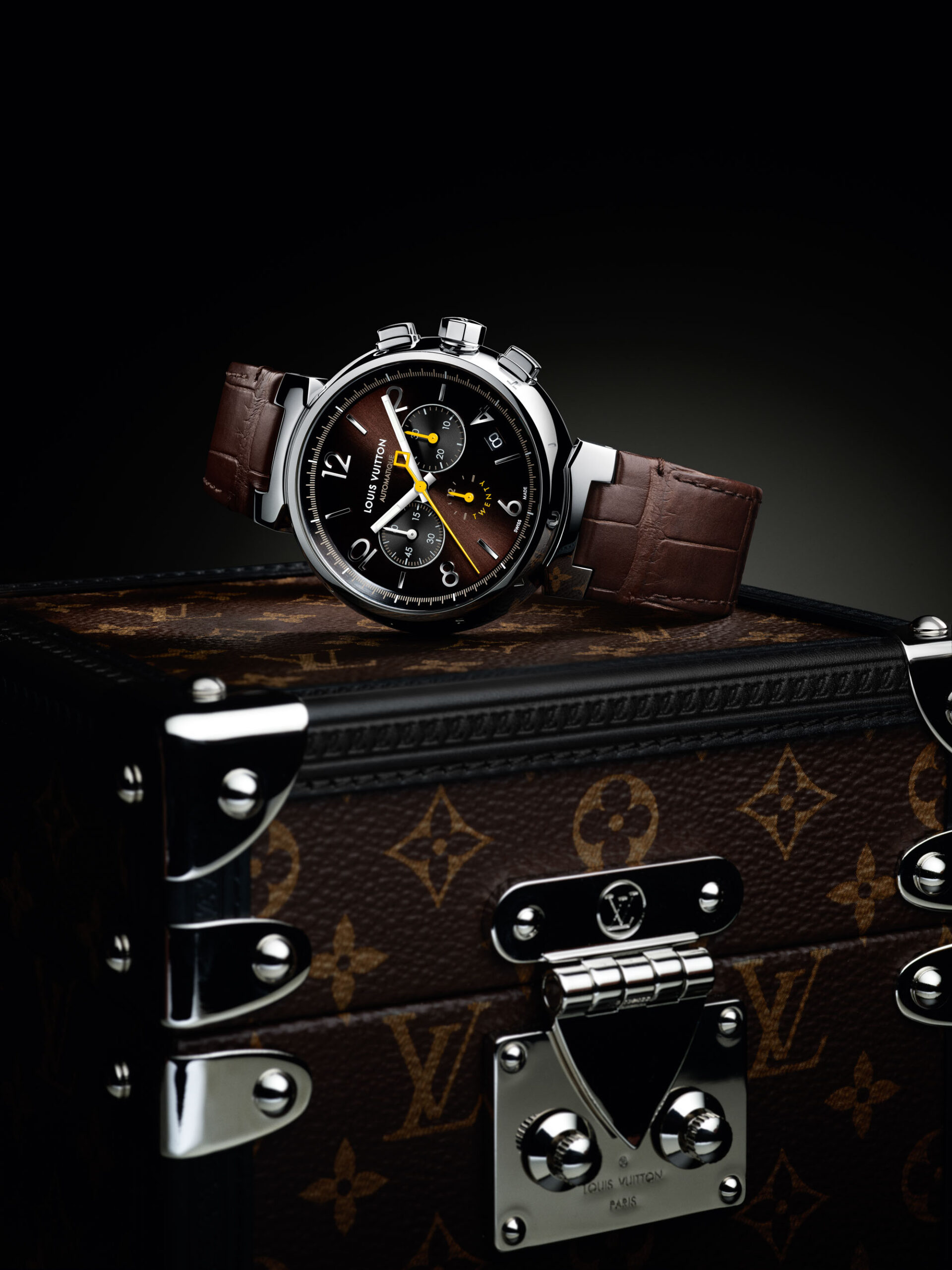 All things considered, the Louis Vuitton Tambour Twenty is a watch that is highly emblematic of the brand on a number of different levels. In addition to the Tambour case being the company’s signature timepiece design, when I close my eyes and think about Louis Vuitton, the single image that first comes to mind is the company’s classic brown and gold monogram print, and this watch definitely offers a similar overall vibe with its dark brown dial and bright yellow accents. Additionally, another nice touch is that the box for the 20th-anniversary edition Tambour Twenty takes the form of a miniature Louis Vuitton Monogram trunk, which looks just like a tiny version of the legendary travel bags and suitcases that first pioneered the now-iconic aesthetic. With an official retail price of $17,800 USD, the Louis Vuitton Tambour Twenty is anything but an inexpensive watch. However, it’s important to remember that the model is a 200-piece limited edition that uses an elevated version of the Zenith El Primero for its movement, and it comes from a company that is easily in contention for being one of the single most famous and recognizable luxury brands in the entire world. For more information, please visit the manufacturer’s website.