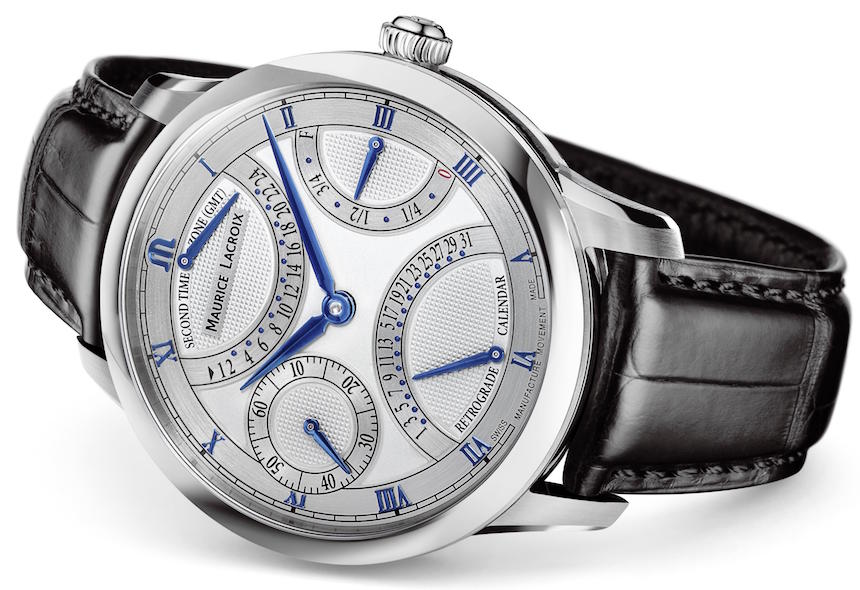 Coinciding with the start up of Baselworld 2017, Maurice LaCroix has just announced two new models in their Masterpiece Retrograde series of watches – one with dual retrograde registers, and one with a moon phase complication. Officially named the Maurice LaCroix Masterpiece Double Retrograde and Masterpiece Moon Retrograde watches, these are some lust-worthy-looking pieces – which is what I typically expect from this line. These models will be replacing the outgoing versions which have been around since around 2003, cleaning up the look and making the pieces a little sleeker overall. 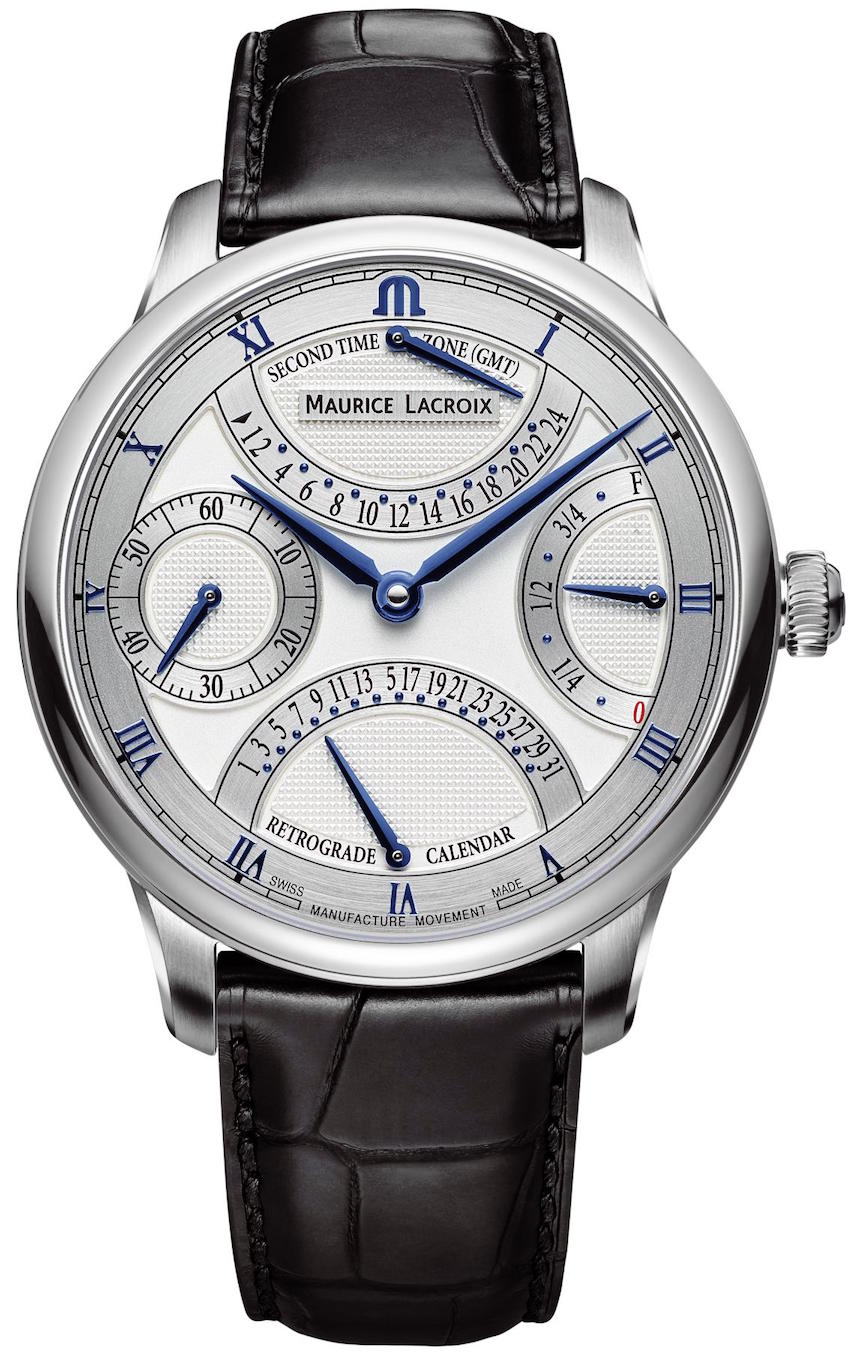 For the Maurice LaCroix Masterpiece Double Retrograde, you have the retrograde calendar at 6 o’clock (a retrograde calendar is simply one that runs linearly and then resets back to the beginning rather than operating in a circular subdial) with the second time zone indicator at 12 o’clock. I know this is a serious piece of watchmaking but… is it just me, or should there be a “freak out” button that sets those two hands moving like windshield wipers? Rounding out the dial tucked into the 43mm stainless steel case you have the sub seconds over at 9 o’clock, and a power reserve over at 3 o’clock. And then, turning above all of that, you have the central hours and minutes, of course. 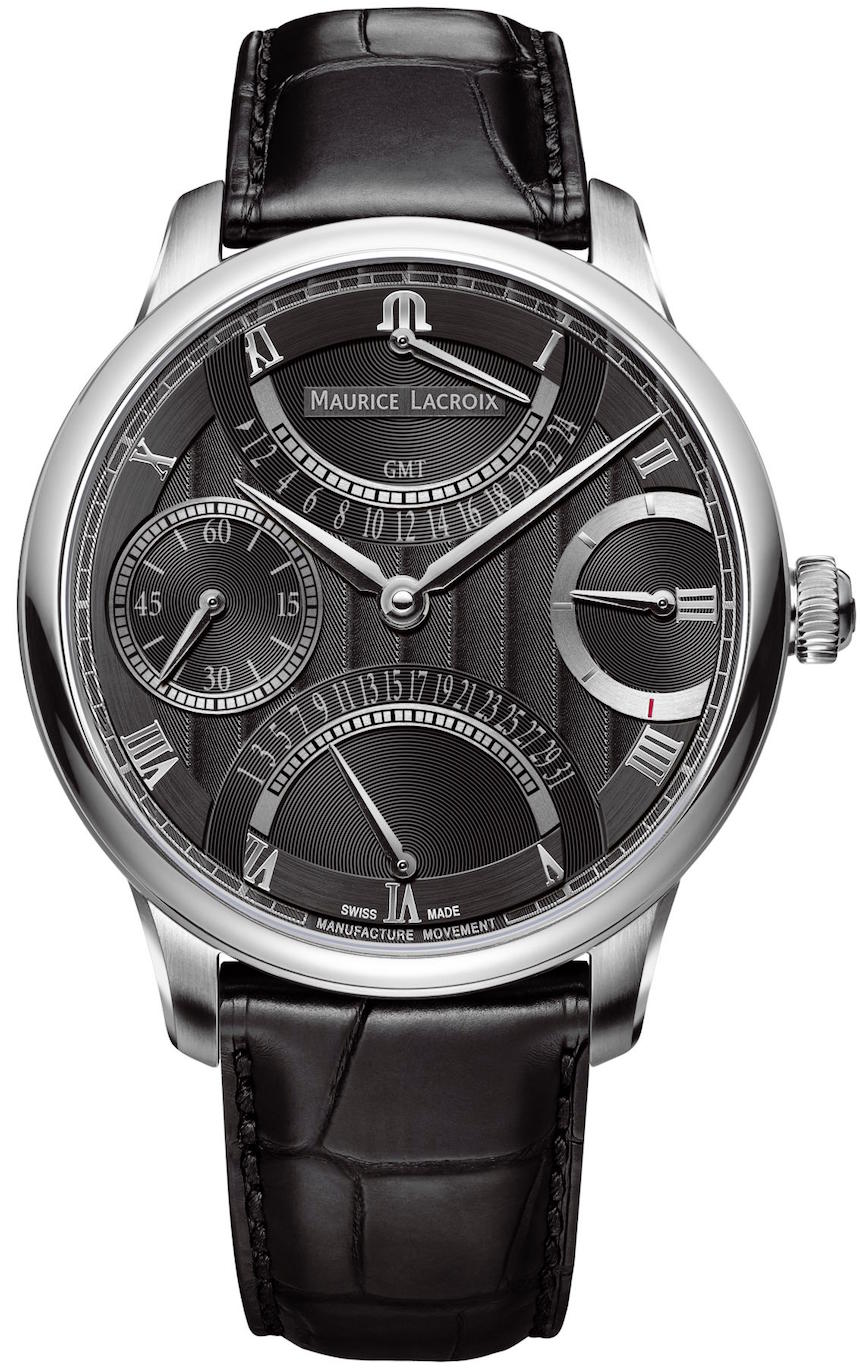 Anyway, rounding out the dial tucked into the 43mm stainless steel case you have the sub seconds over at 9 o’clock, and a power reserve over at 3 o’clock. This is all powered by the ML191 movement which operates at a languid 18,800vph (2.5Hz) and has a power reserve of 52 hours.

When you start talking retrograde registers on a watch, to my mind, you are getting a look that is simultaneously classy and complicated. Basically, it’s a way of displaying information on a register that allows for a profusion of hands on the dial, which shows off – on the dial – the complications going on within the movement. The Maurice LaCroix Masterpiece Double Retrograde is available in either a silver or black dial, with blued or Rhodium accents. My money is on the blue, if anyone was asking. Oh, you’ll be able to see the movement from an exhibition caseback, and we’ll be able share those pictures with you once we get our hands-on images of this watch. 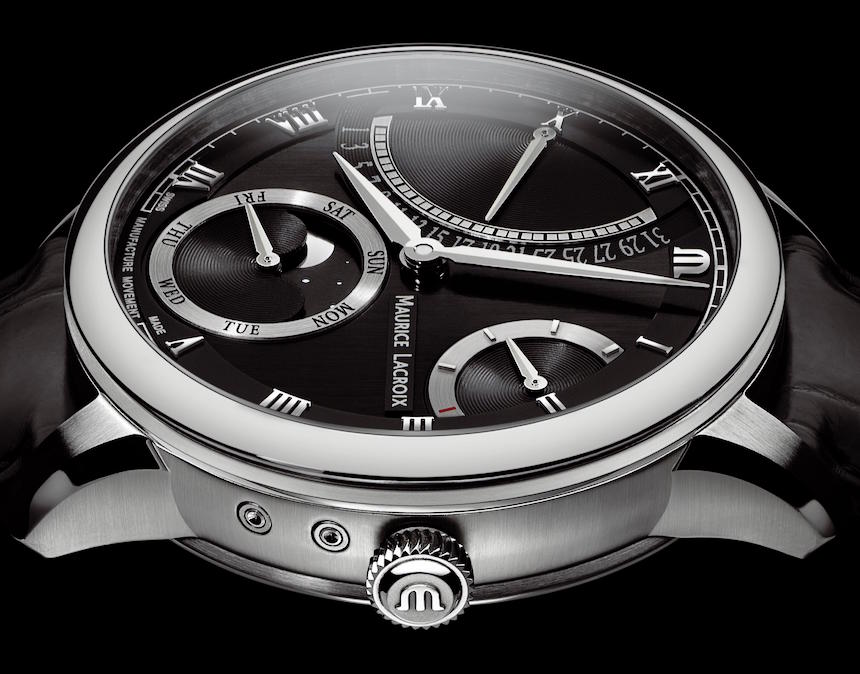 Should two retrograde dials be too much for you, there is a very interesting design option in the form of the Maurice LaCroix Masterpiece Moon Retrograde. Of the two new designs, I like this one the most, even though I personally do not have a lot of functional use for a moon phase complication. Why do I like it better? 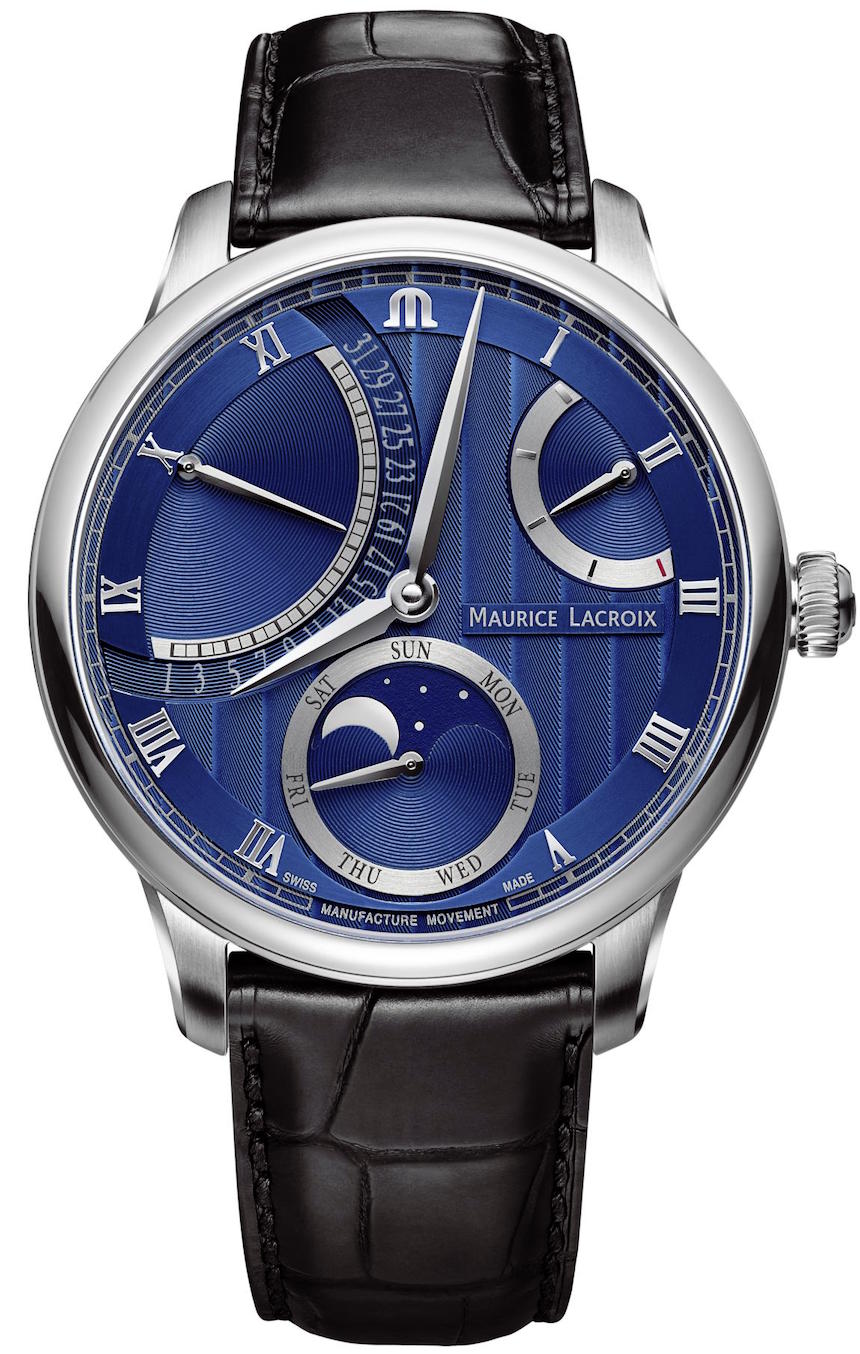 I’m glad you asked. The Maurice LaCroix Masterpiece Moon Retrograde has a bit of whimsy built into that classy (and complicated) look. This is accomplished by the large retrograde calendar on the left of the dial, which gives an off-kilter feel to the dial without totally unbalancing things. Add the day of the week (which surrounds the moon phase) and the power reserve indicator, and you have a watch that is showing you about all of the temporal information you might need. Obviously, that’s aside from a second time zone, which the Maurice LaCroix Masterpiece Double Retrograde has, of course. 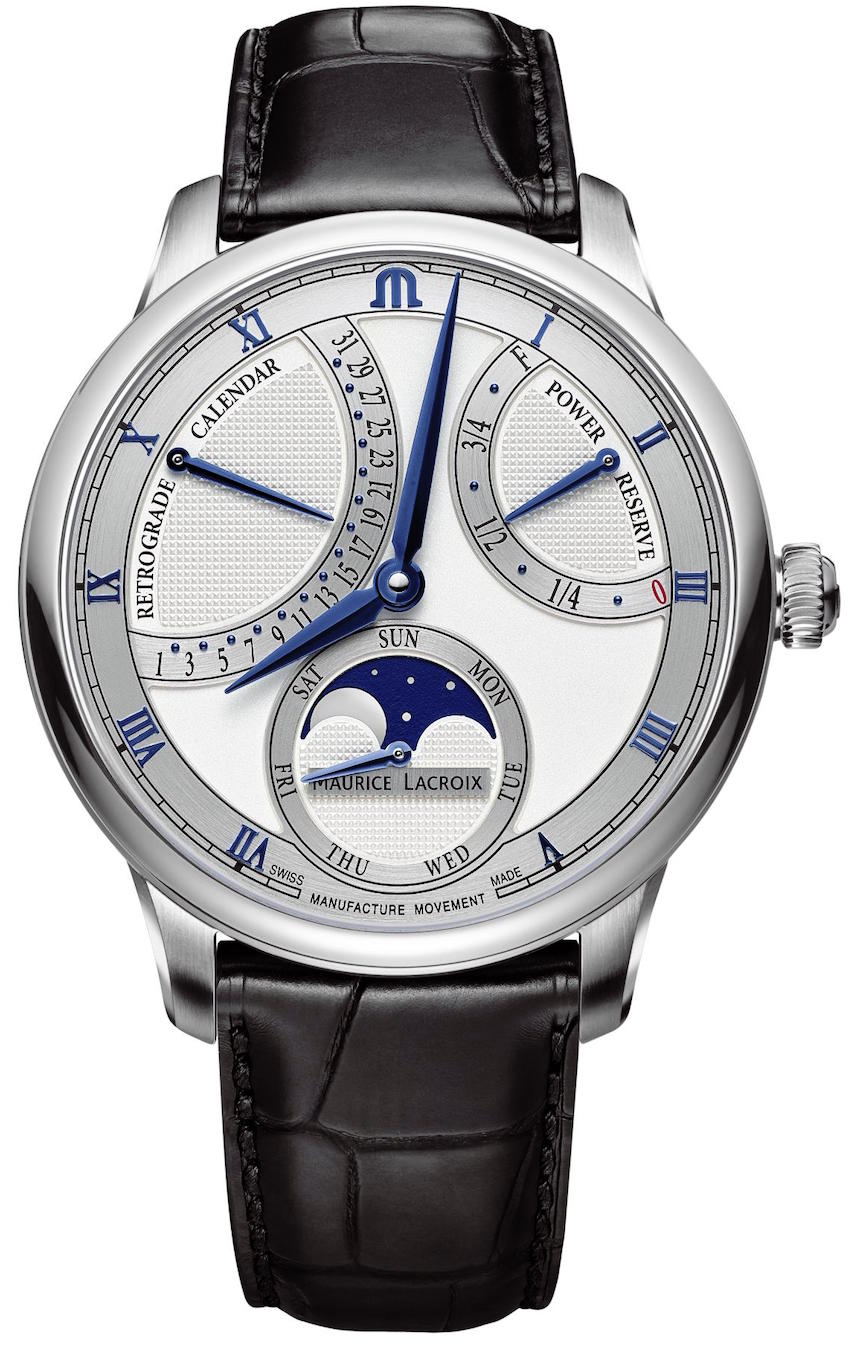 Now, for the Maurice LaCroix Masterpiece Moon Retrograde, you have three different dial options in the 43mm case – black, silver, or blue, with Rhodium or blue accents. While the silver dial with blue accents is tidy, I find myself giving the edge to the blue dial. Going to go bolder with the larger retrograde calendar, why not be bold with the electric blue dial? Oh, and this watch is powered by the ML192 movement which also gets a 52-hour power reserve and there will be an exhibition caseback as well.