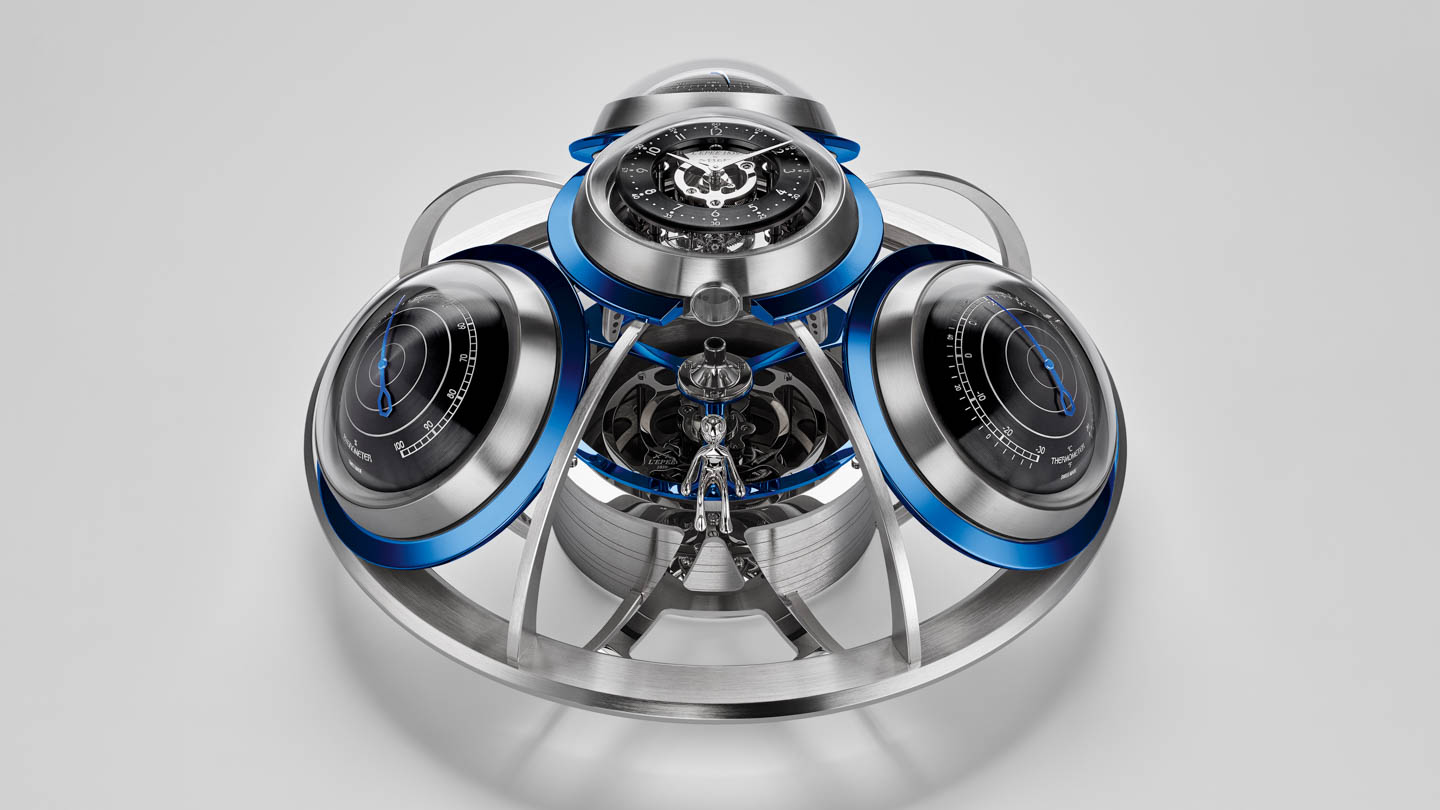 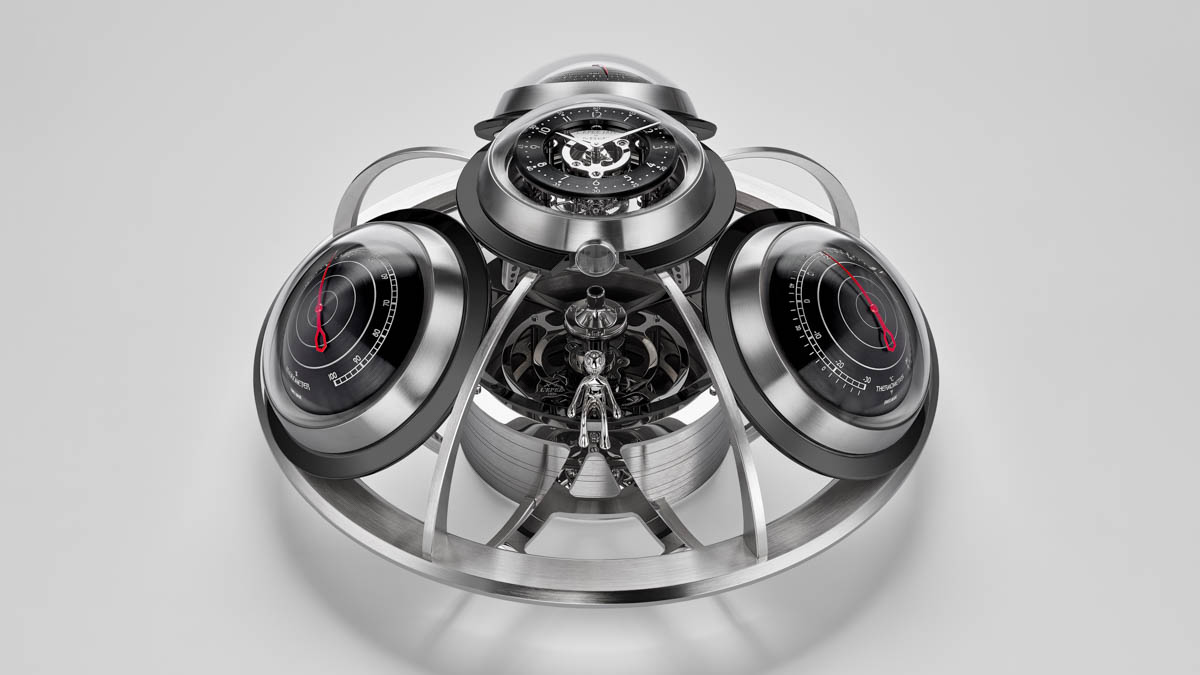 Swiss MB&F and renowned Swiss clockmaker L’Epée have teamed up on numerous occasions in the past and the newest Fifth Element Horological Weather Station might just be the most impressive yet. The Fifth Element Horological Weather Station is so-called because of its five components. The clock, barometer, hygrometer, and thermometer are four, but can you figure out which is the fifth? 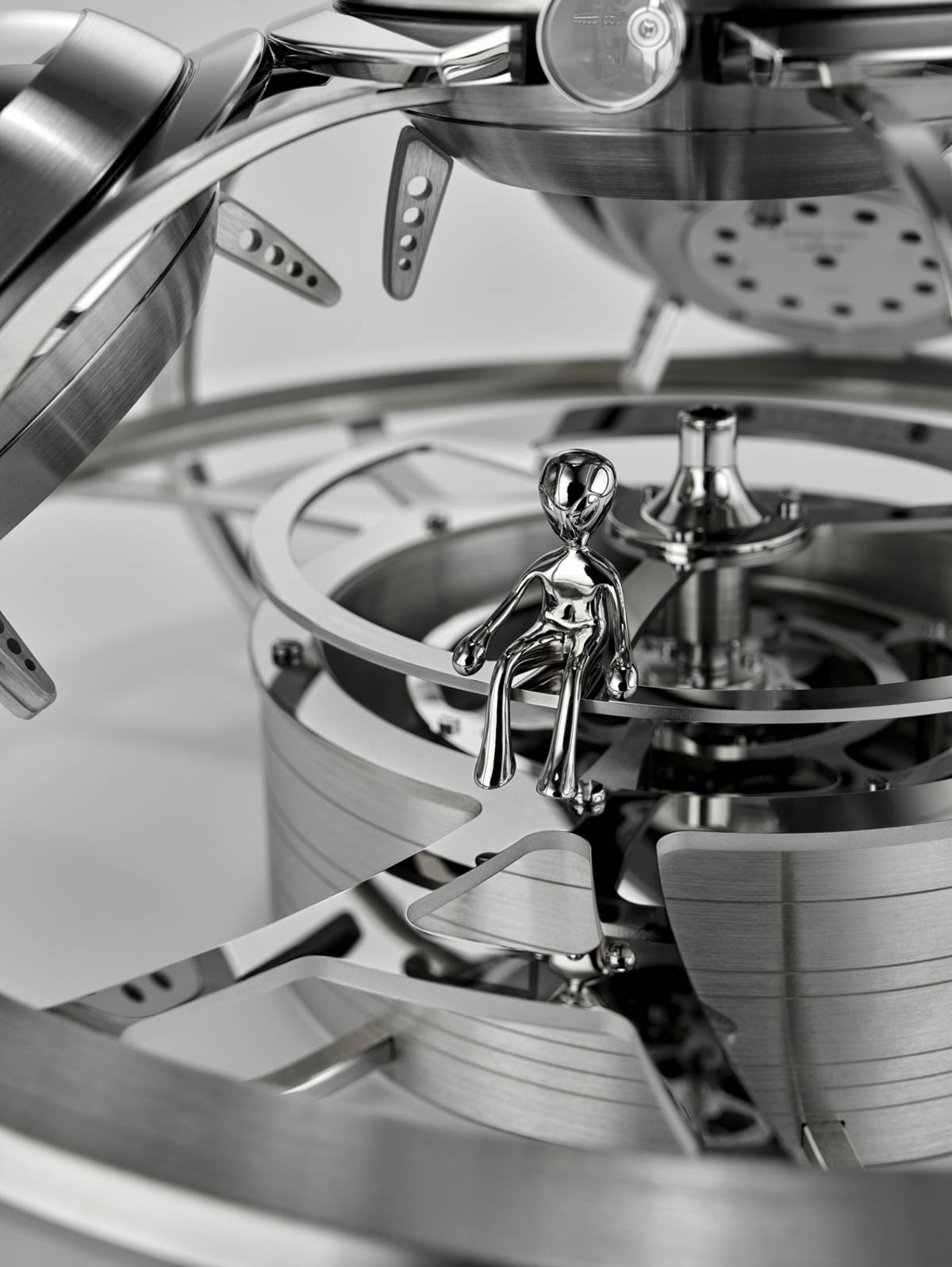 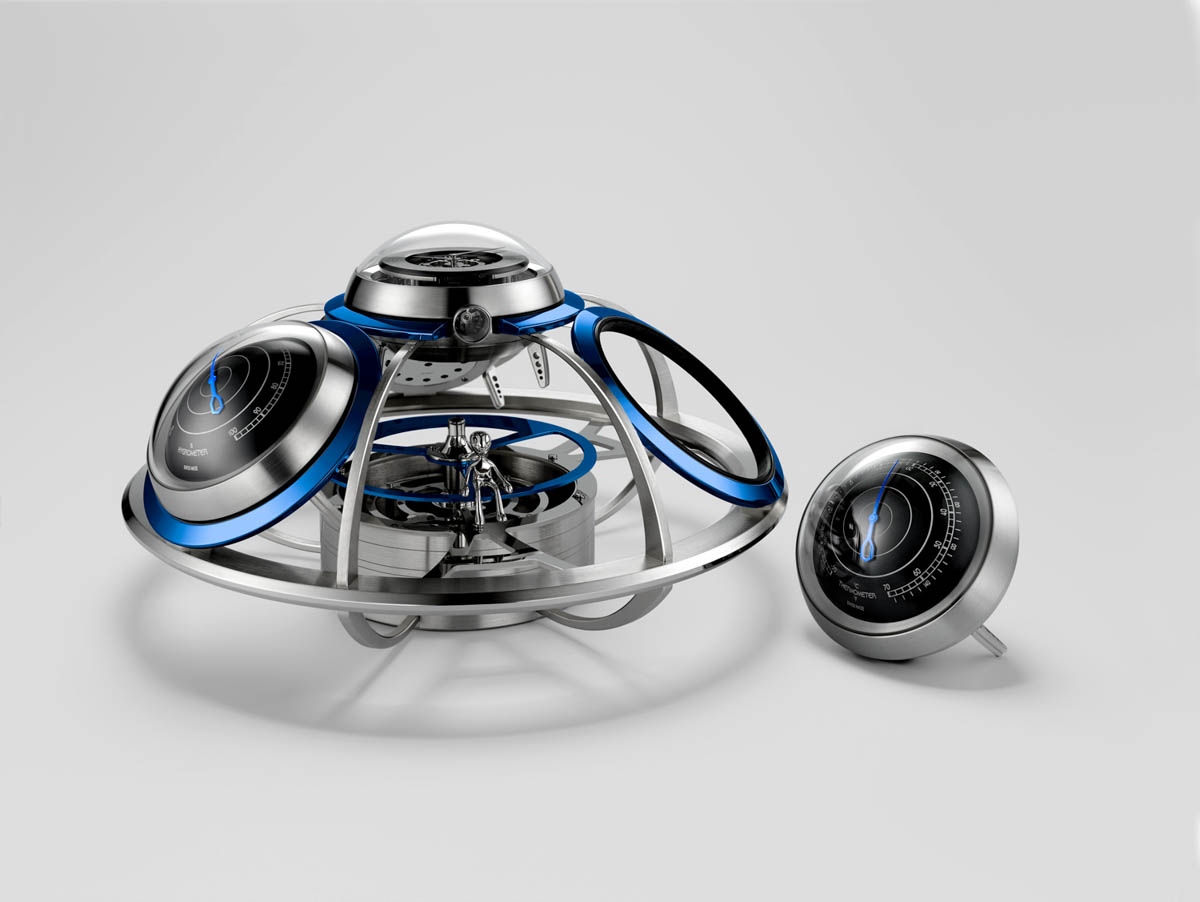 The fifth element of this remarkable clock is actually slightly concealed. At the bottom of the base is a small figure of an alien pilot that MB&F and L’Epée call Ross. And thanks to its own air-regulated movement, Ross will actually rotate around the clock. MB&F and L’Epée describe Ross’ movement as checking the skies are clear of both clouds and hostile invaders, but it is really is just a neat way of letting owners know that the clock is running. This is the fifth element that gives this clock its name. 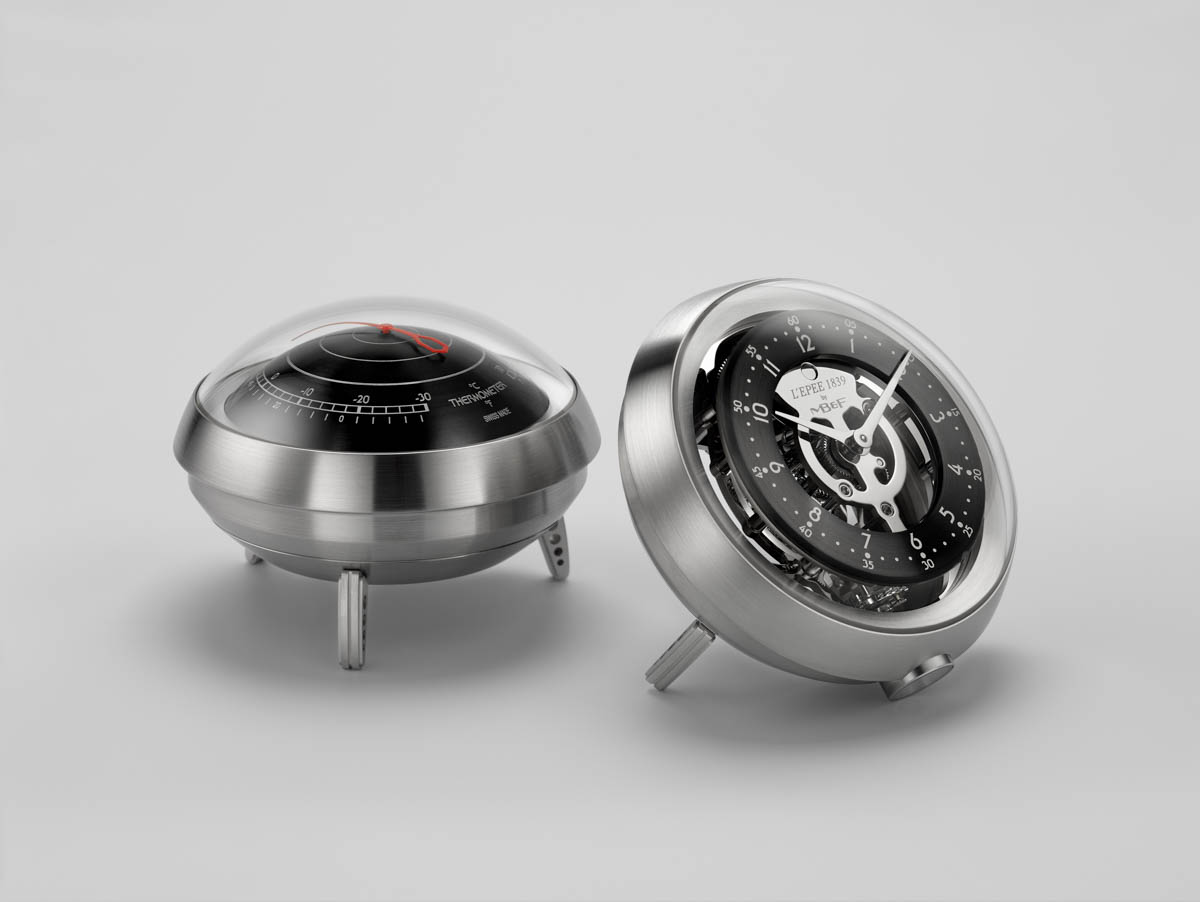 So, the Fifth Element Weather Station is wacky and fun. But that doesn’t mean it isn’t practical. To begin, the time and dials for the various weather readings look perfectly legible. And, the four “elements” can actually be removed from the frame and can function independently on their own. After all, they have integrated stands, so they won’t just flop on the table if you remove them from the frame. In all, the Fifth Element Horological Weather Station is an excellent example of how to make horology fun and interesting without sacrificing practicality and functionality. 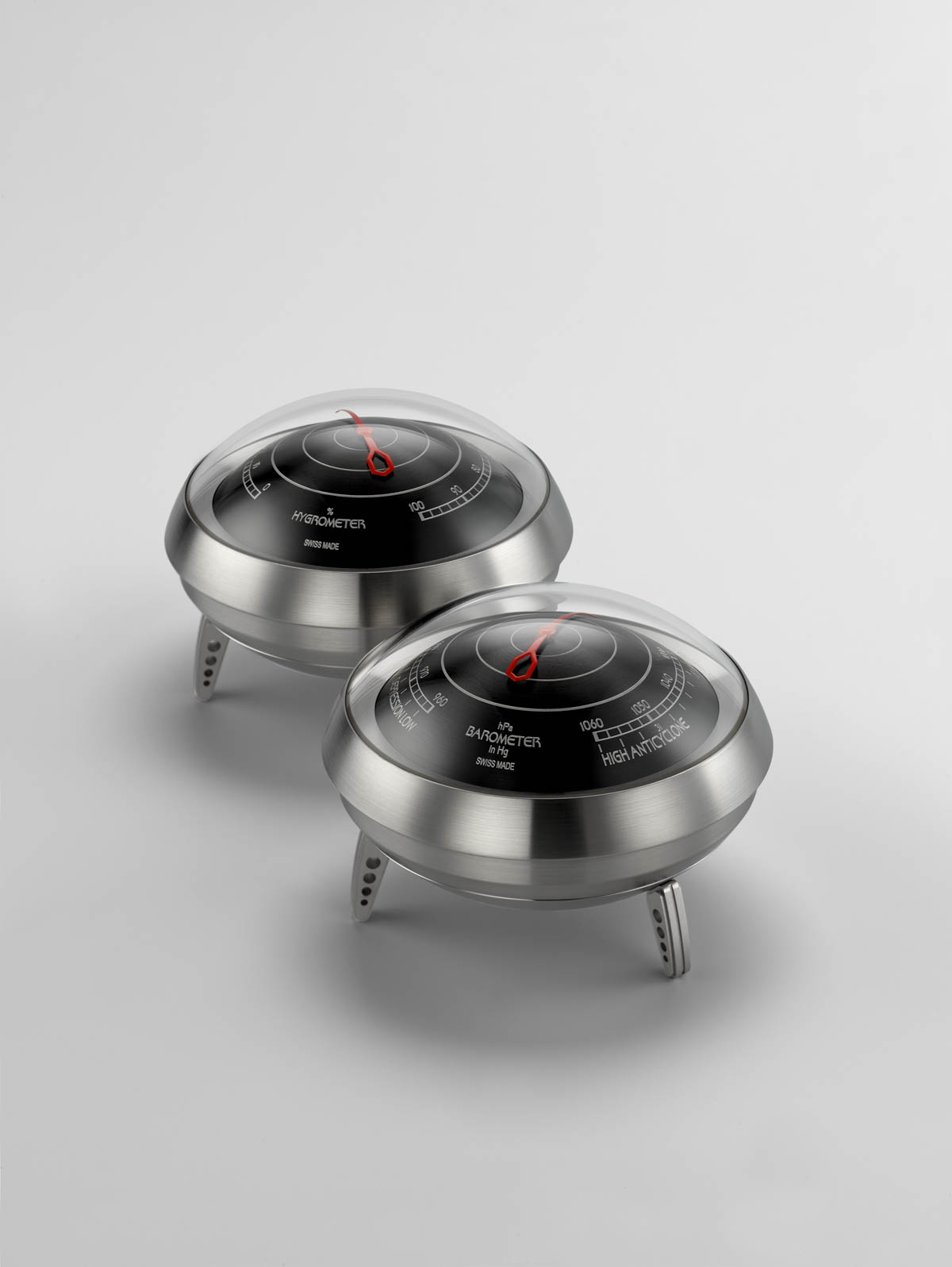 I always look forward to the clocks made by MB&F and L’Epée, mainly because they provide a larger canvas for MB&F to go wild and work their magic. Their past collaborations have been nothing short of epic and fun. Remember the Octopod clock and the Starfleet Machine Clock? I’m glad to see that they managed to carry over this philosophy to this new clock. The MB&F and L’Epée Fifth Element Horological Weather Station is available in three limited editions of 18 pieces in black, silver and blue, and is priced at 52,000 CHF. mbandf.com