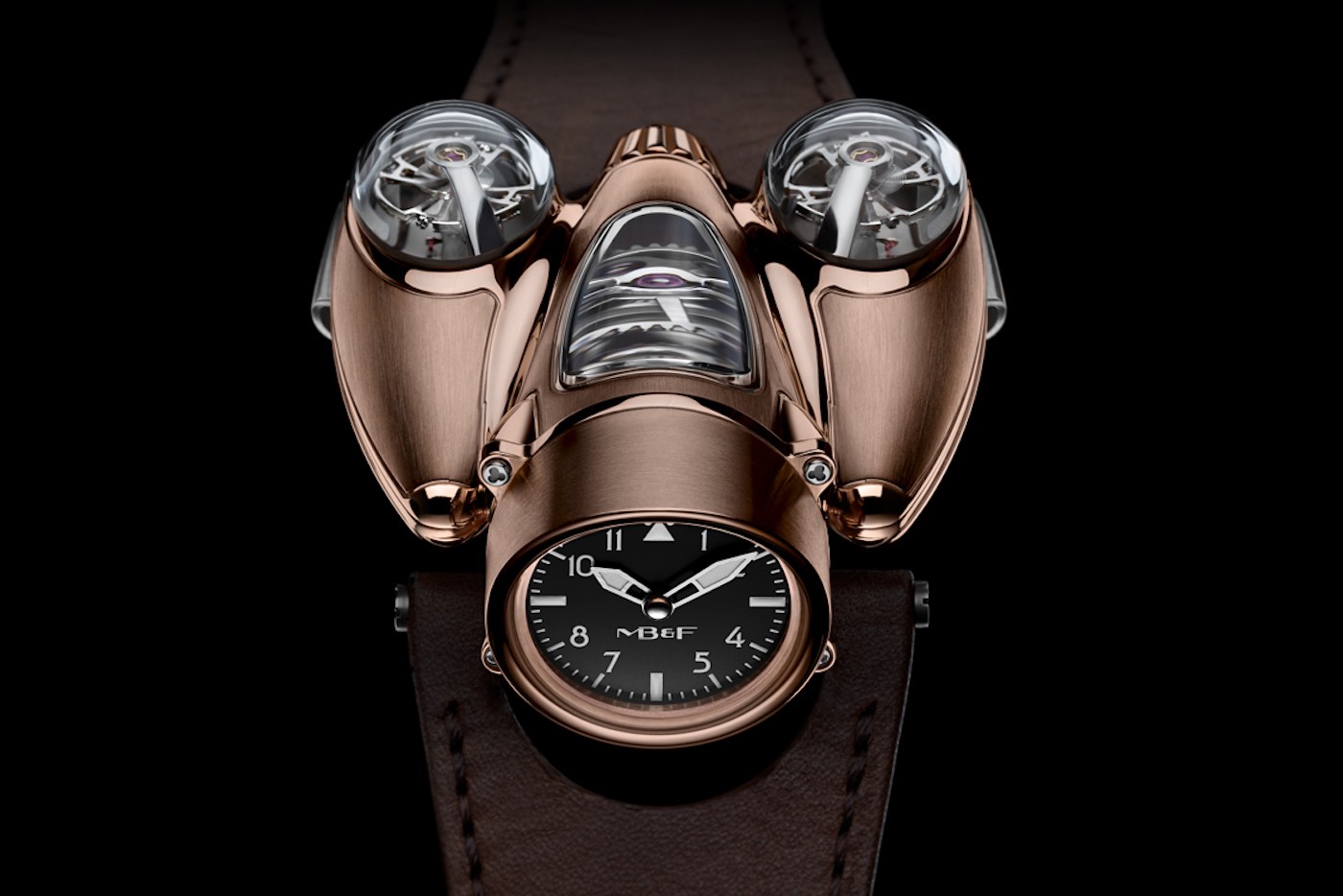 Hot on the heels of Ariel’s in-depth review of the titanium MB&F HM9 Flow watches, Max Büsser and team has announced a red gold version of the MB&F HM9 Flow Air (90.RL.AB) and the MB&F HM9 Flow Road (90.RL.RB). These new iterations are just as visually engaging as the previous models in the Horological Machines canon but have that extra luxury edge that MB&F’s signature shade of red gold adds to its designs whenever it is called into action. It joins the HM9 Flow Air (90.TL.AB) the HM9 Flow Road (90.TL.RB), in the ninth numbered installment of the HM family. 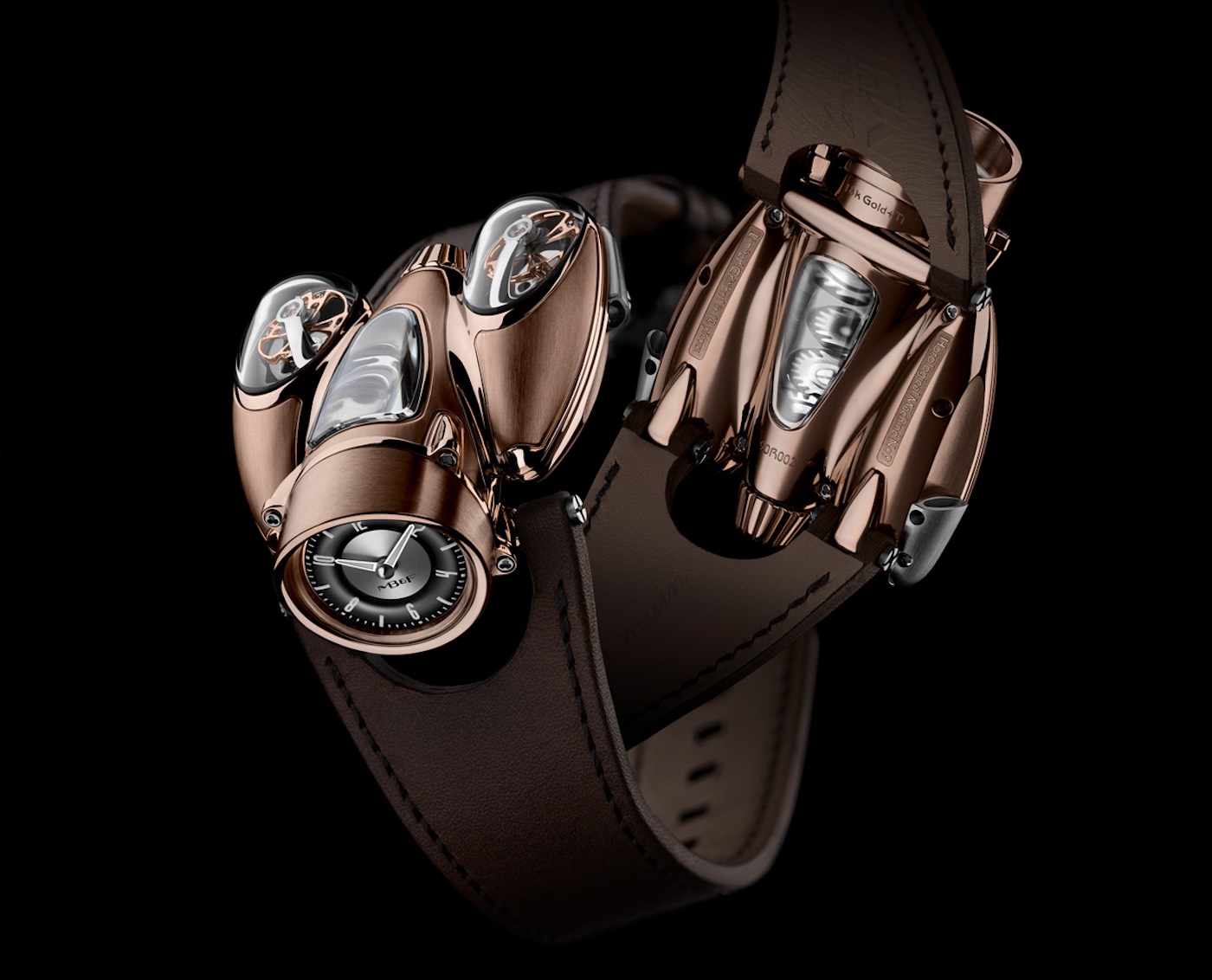 The HM9 concept is over a year old already, but this watch still looks remarkably fresh. Whenever I see a new piece by MB&F, I am lulled into a state of childlike amazement at the shapes and functions this ever-changing team of dynamic designers/movement magicians can come up with. I also tell myself that the quality of MB&F timepieces has been entirely constant since the brand’s first foray into the world of ultra-niche time-telling machines, simply because my reaction to them, which is grounded in the context of the industry at the time of each’s model’s release, has been. But I’m convinced now, after going back and looking through the history of the brand, which kicked off around the time I started working on movements and was dreaming of all the possibilities a career path yet trodden may hold, that MB&F is not maintaining a level of quality few others can match, but rather improving upon its previous efforts with every subsequent release. 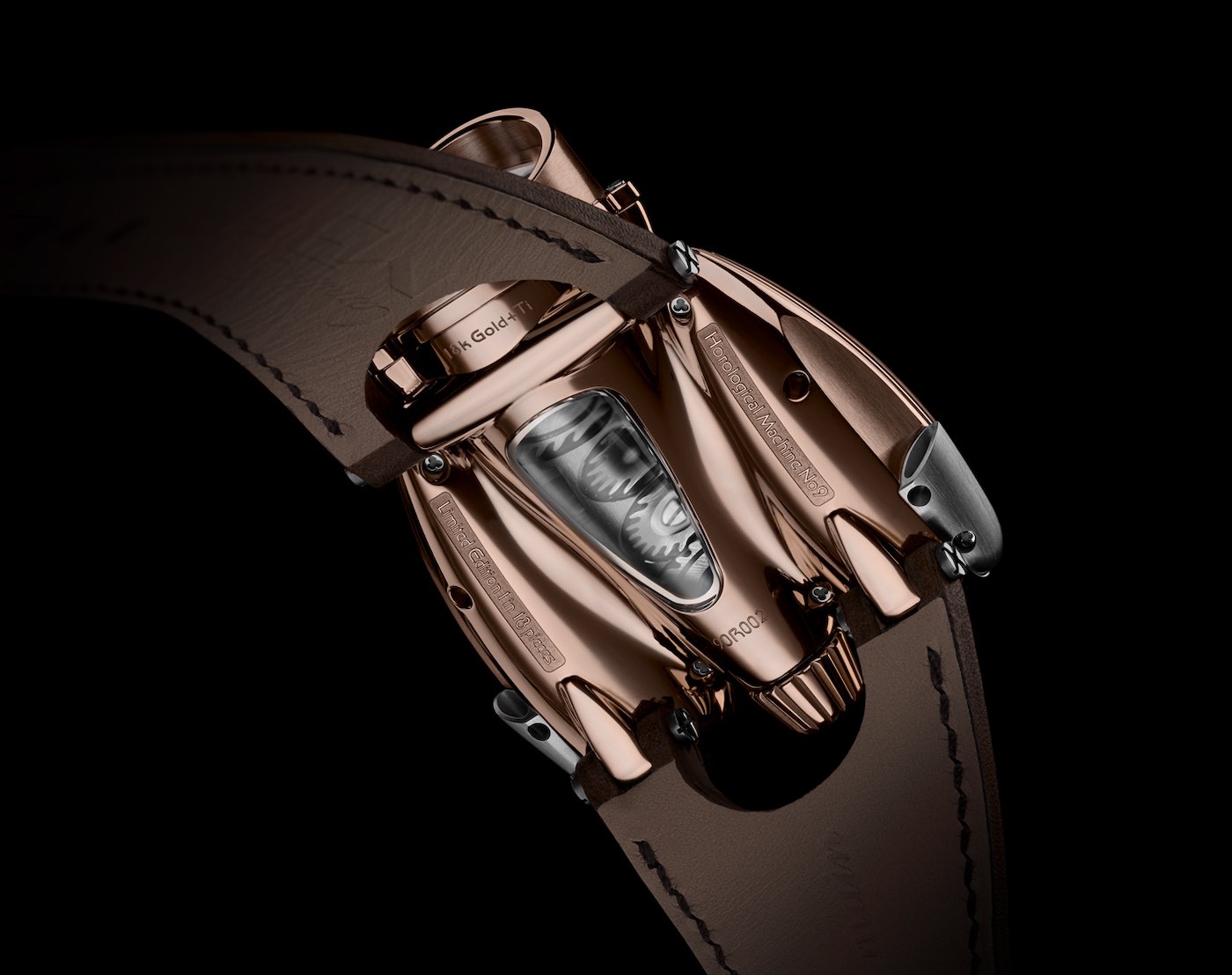 There is clearly much to be gained from experience. And experience counts all the more when it is in a field that remains relatively unexplored. The 3D wrist sculptures produced by MB&F for years have very few parallels in the industry, even now. Manufacturing techniques, knowledge of new and interesting materials, and movement design have all improved at a rapid (and hitherto unseen) rate since the turn of the century. More and more brands can do what MB&F did in its earlier days, but MB&F remains a trendsetter and a trailblazer because of that experience that just can’t be taught. 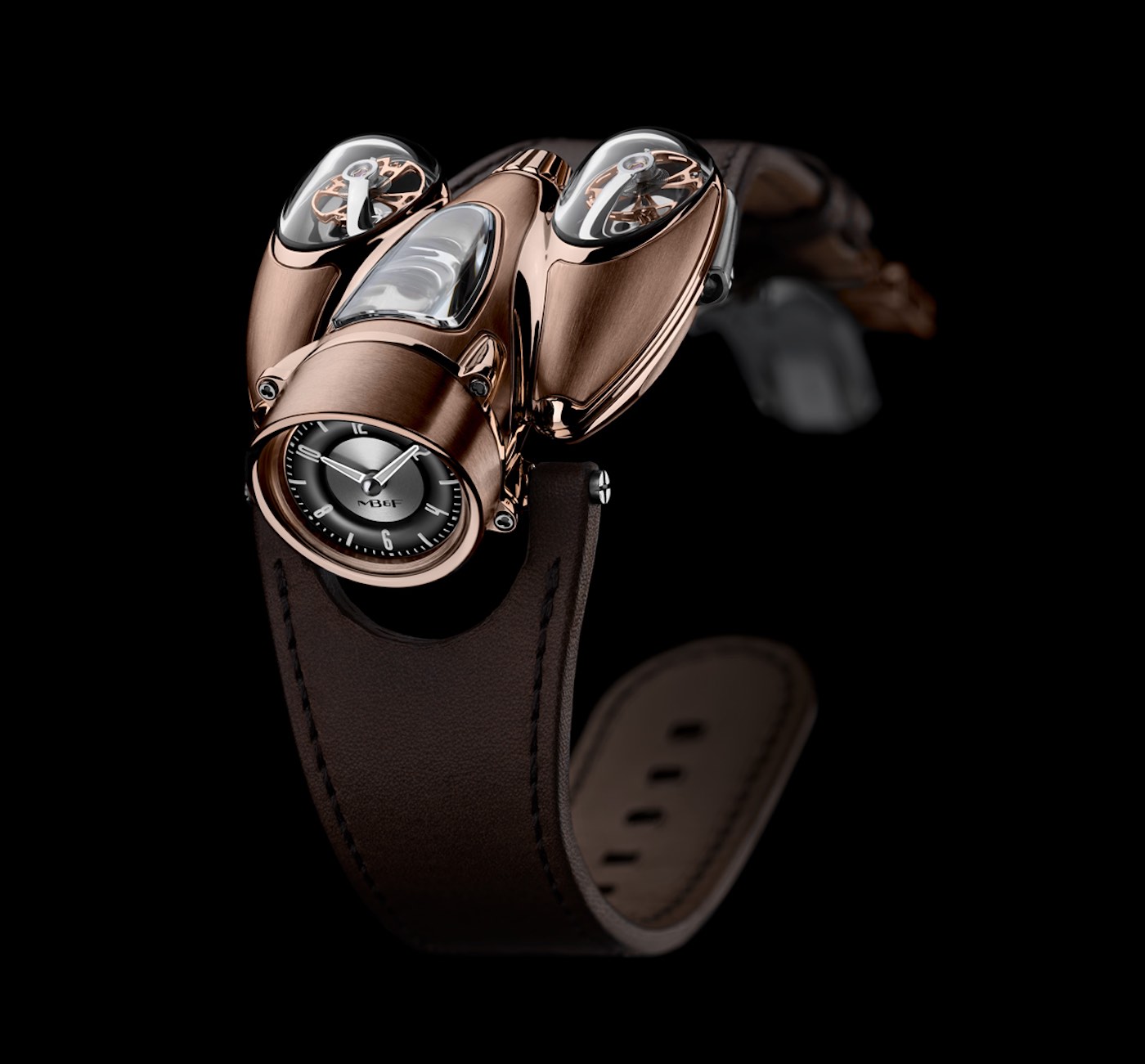 As Ariel pointed out in his recent hands-on with the titanium model, the MB&F HM9 is water resistant, albeit to just 30 meters. But the three-dimensional seal needed to secure the shaped sapphire crystals in place is nothing short of remarkable. Perhaps seals and gaskets are not the sexiest components over which to fawn, but an appreciation of how many humdrum hurdles the brand has to overcome to continue to put out models of such ambition is really at the heart of appreciating what this brand does. 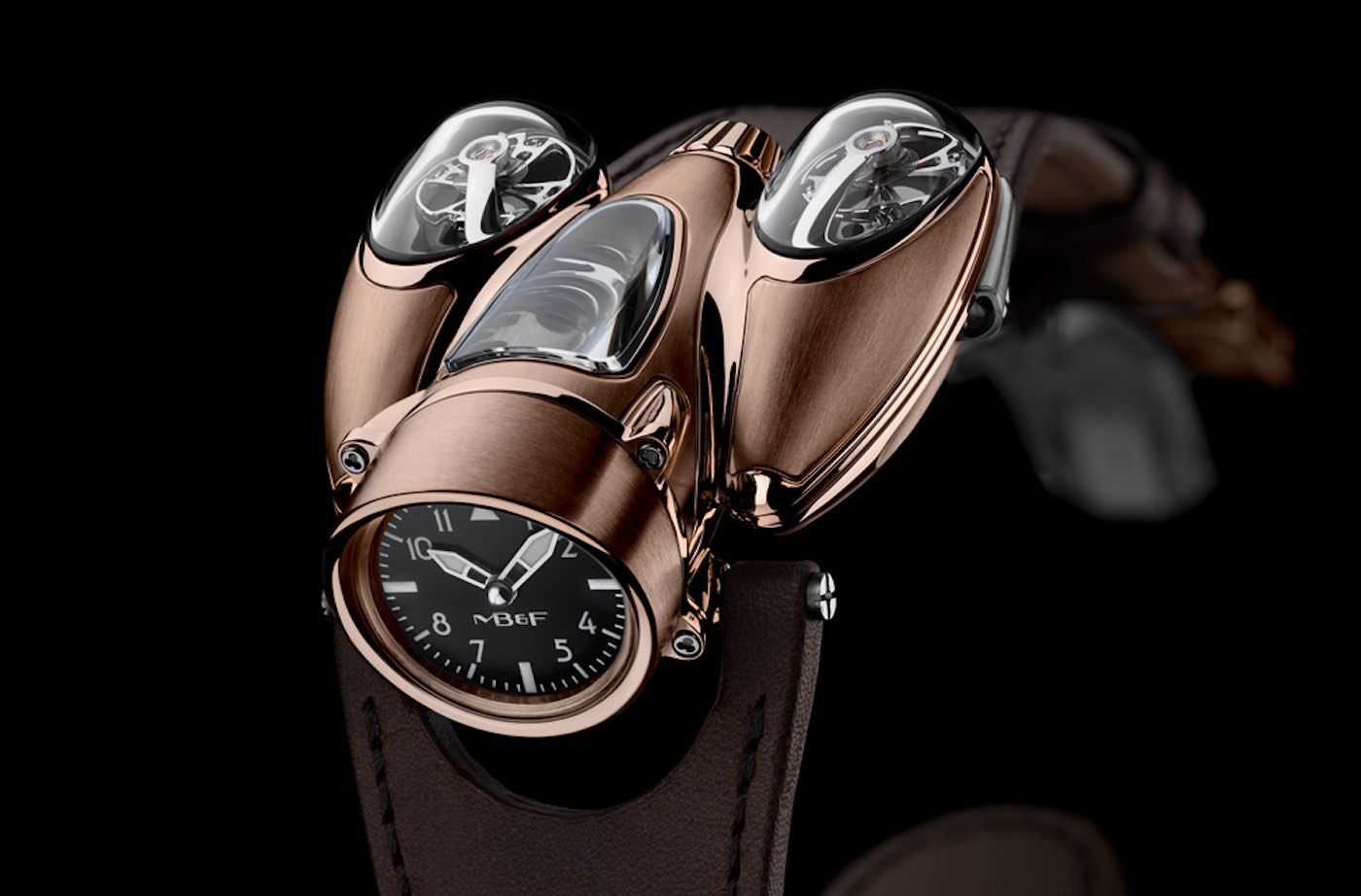 In much the same way as Formula One can influence mass-produced automobiles, so too can horizon-expanding pieces like the HM9 stretch the industry. The level of finish on such a complex case is breathtaking, and the way the time is told via a side-mounted perpendicular dial is surprisingly natural to read. On the wrist, these bizarrely-shaped models sit comfortably, which is a testament to the practical awareness the design team possesses. 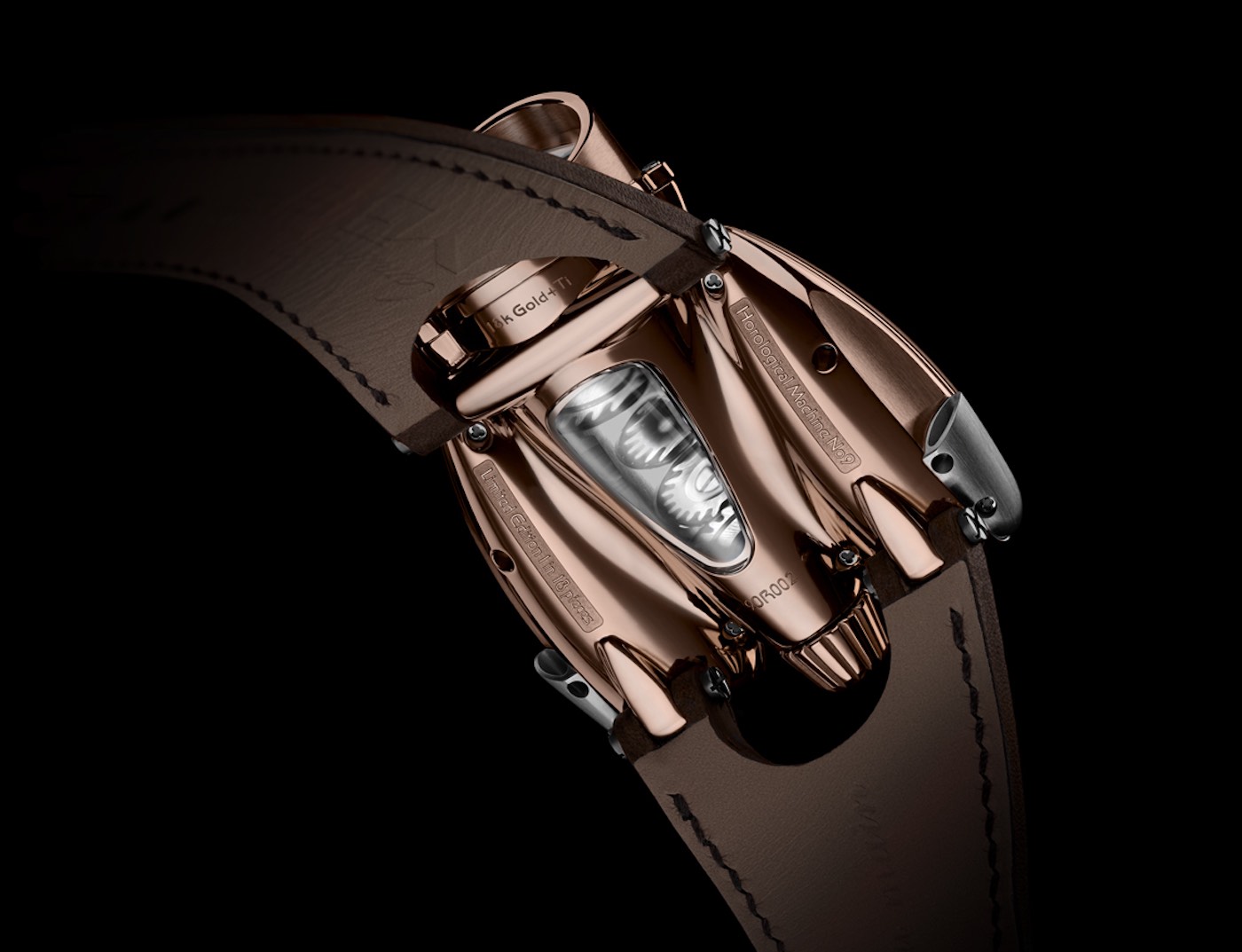 As futuristic as this and many of MB&F’s models appear, a lot of the inspiration for these off-base forms comes from the past. In the case of the HM9, the body of the watch is inspired by the pioneering research into aerodynamic technology of the 1940s and 50s. The dials (which define the “road” and “air” models) are inspired by the fields of study that most benefited from the research into aerodynamics in the mid part of the last century.

The movement, which is typically unique in its layout, uses two balance wheels, both given pride of place atop the case, to ensure excellent precision. A planetary differential takes the average reading of these two regulating organs (which beat at 2.5Hz), combining that output before it is communicated to the hands. 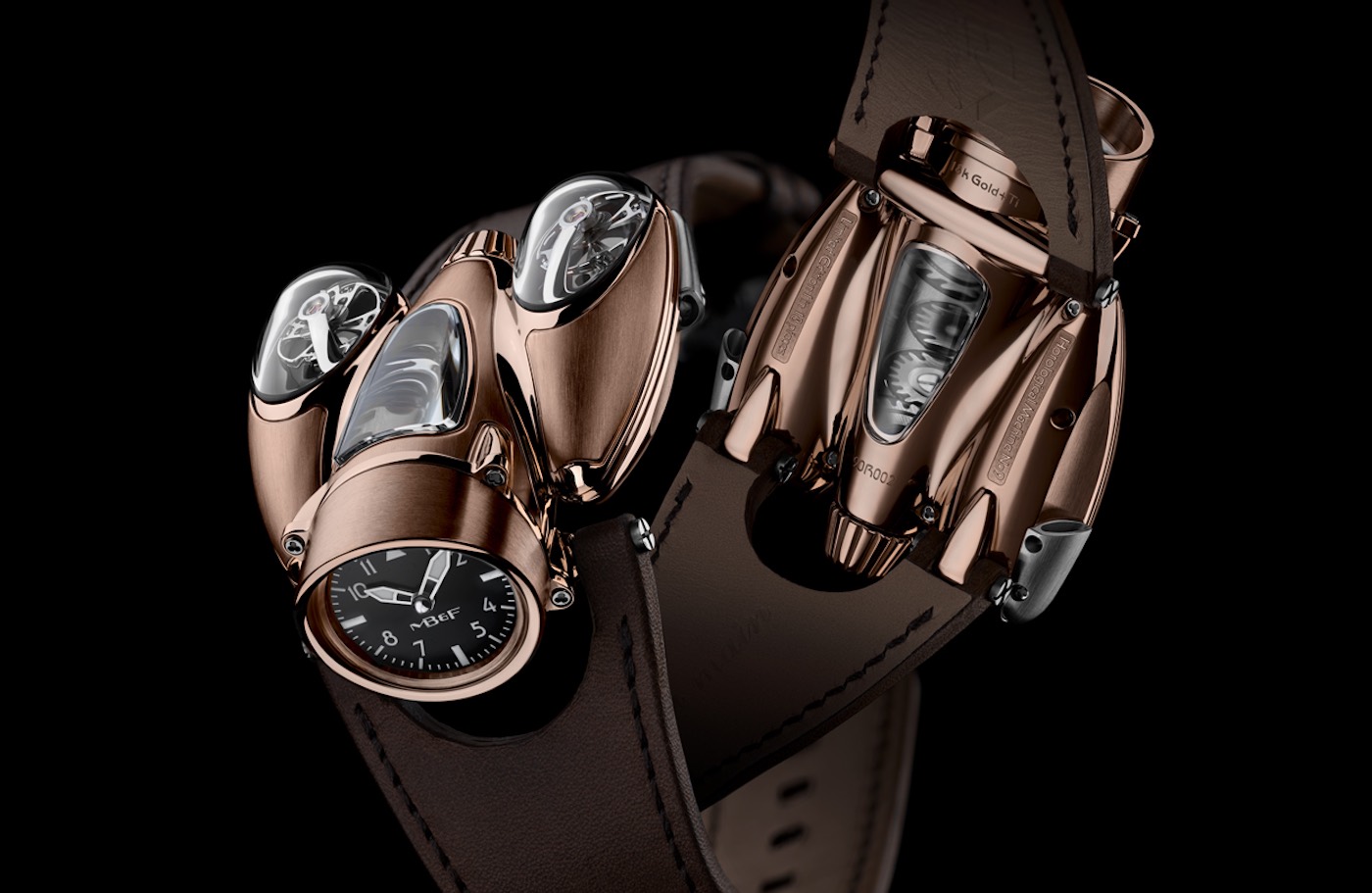 The 5N red gold versions of the MB&F HM9 Flow “Air” and “Road” models will be limited to 18 pieces each (down from the 33 pieces of the titanium versions). Aside from the aviation-inspired dial for the “Air” and the automotive-inspired dial for the “Road,” the major difference between the two references is the movement treatments: The “Air” model has an NAC-plated movement and rhodium-plated balance wheels, while the “Road” model with the black and silver dial has a rhodium-plated movement and red gold balance wheels. Learn more about these arresting machines at mbandf.com.