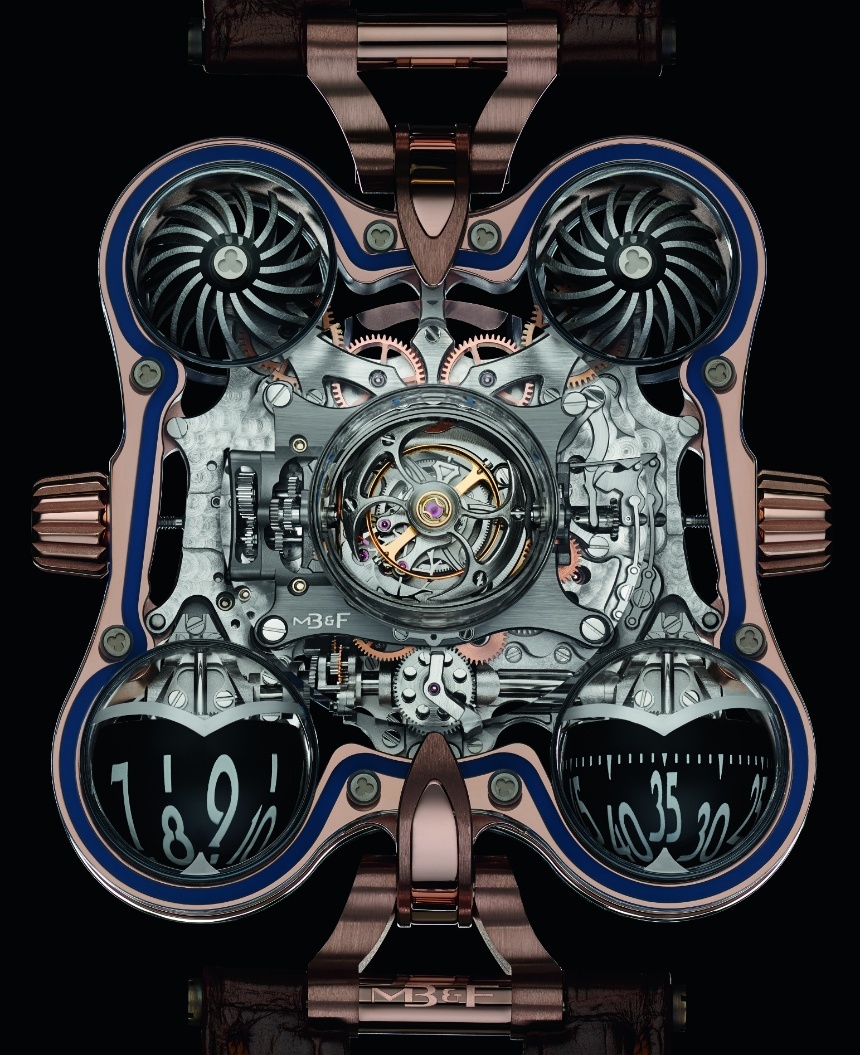 In addition to recently offering more entry-level (relatively speaking) price points, MB&F is also upping their game on the super high-end. At SIHH 2016 MB&F will introduce the Horological Machine No. 6 SV which should be their most expensive watch yet with a price very close to $400,000. “SV” stands for “sapphire vision,” a concept MB&F introduced us to back in 2011 with the debut of the MB&F HM2 SV “Final Edition” watches (hands-on here). 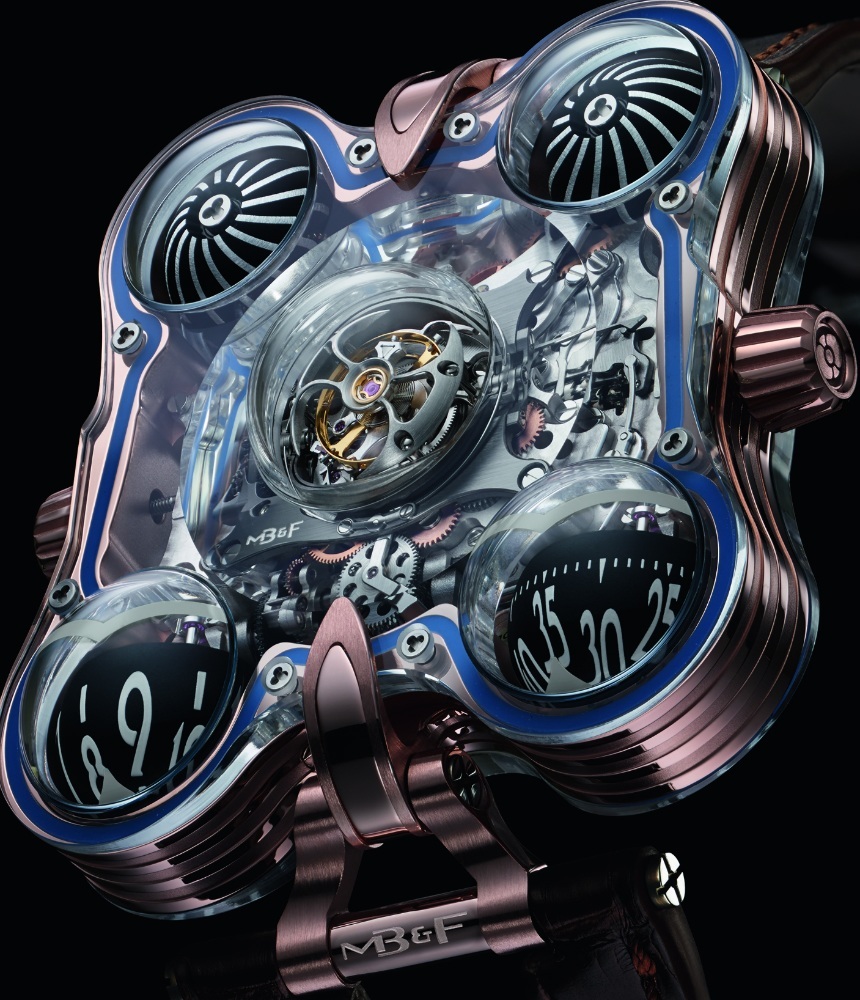 At the time, it was highly unusual for a watch to have anything but the top crystal itself produced from sapphire. Watchmakers were keen to use the hard and transparent material for more applications, but sapphire is incredibly difficult to machine in unique shapes given how hard it is and how long it takes. Rebellion watches recently introduced a watch with an all-sapphire crystal case and claimed that it took 99 business days to fully cut just one complete case. A few years ago, Richard Mille began introducing watches with cases cut from one solid piece of sapphire crystal, and said watches come with prices of over $1,000,000 or over $2,000,000 each. 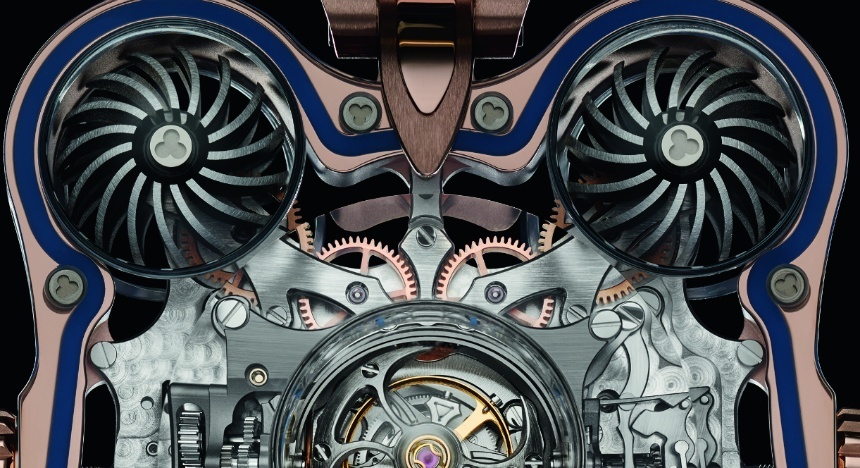 For the MB&F HM6 SV, MB&F doesn’t use one solid piece of sapphire crystal, but rather 11 distinct pieces which are then specially “glued” together. This includes the main sapphire crystal plate for the top and bottom of the watch, as well as the nine domes which go over various elements. Like the HM2 Sapphire Vision, the MB&F HM6 SV Sapphire Vision uses a colorful gasket ring (here, in blue on both versions) as a further enhancement of style. 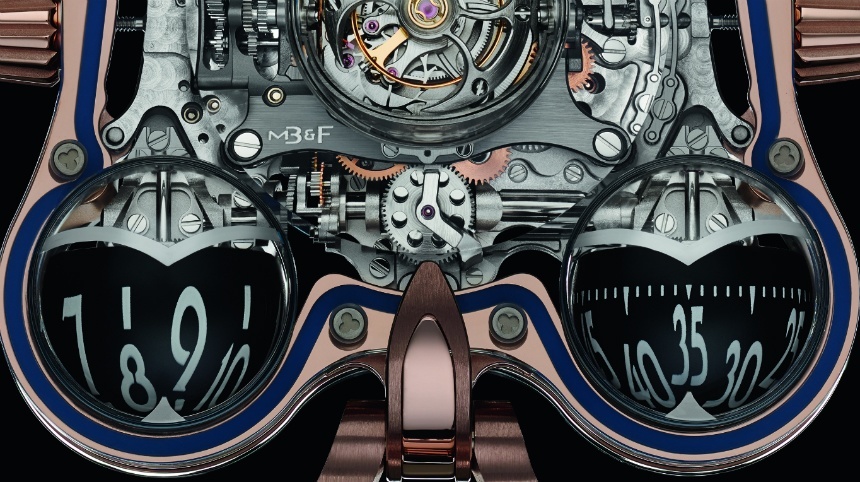 MB&F’s Horological Machine No. 6 began life in 2014 as the HM6 Space Pirate (hands-on here). Produced in titanium (and later in the HM6 RT titanium and red gold model), the original HM6 was inspired by a French-language Japanese animation that MB&F founder Max Busser viewed when he was young. With a very original design and price tag of $230,000, the HM6 Space Pirate was an amazing creation but one that didn’t suit everyone’s tastes aesthetically in terms of being “beautiful.” For luxury watches, beauty is extremely important when it comes to “must-wear” emotions, so it is interesting to see how MB&F returned to the notion of the HM6 case with something quite different (yet familiar) in the MB&F HM6 SV.

According to the brand, the MB&F HM6 SV is inspired by Art Deco, as well as the era’s use of wind tunnels to design everything from aircrafts to automobiles. Thus, the MB&F HM6 SV design could be referred to as “Art Deco streamliner,” according to the brand. The new style of case mixing precious metal and sapphire crystal is very interesting, and I am deeply excited to see the watch in person quite soon. I believe that a lot more people will find this particular version of the Horological Machine to be “beautiful” (yet there is a steep price to pay). 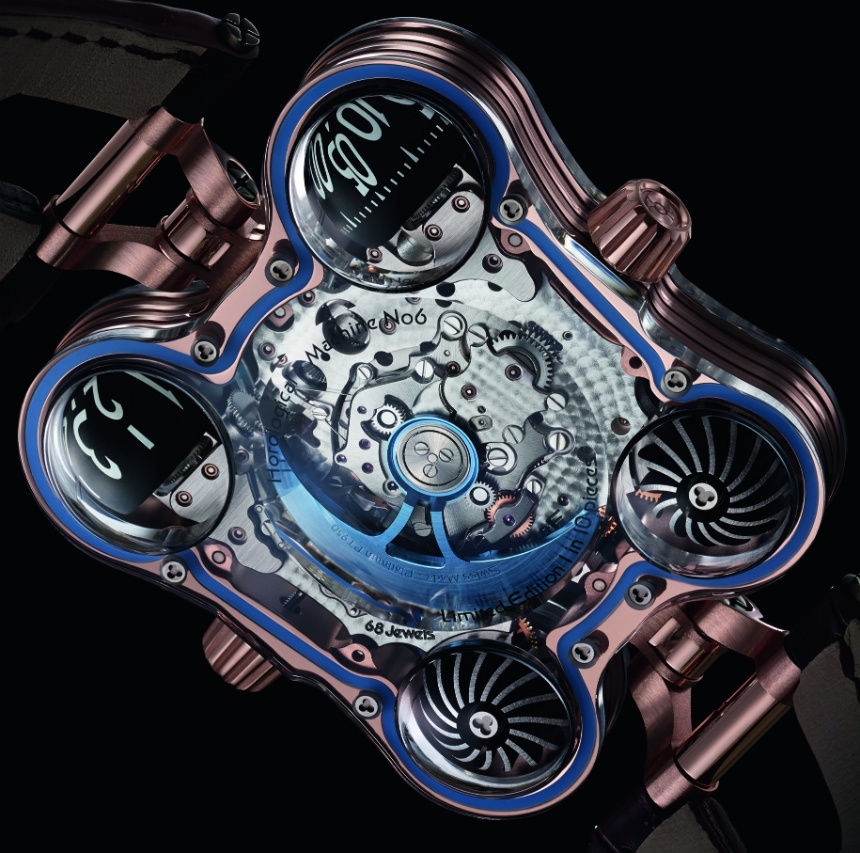 The more “biomorphic” design influences of the HM6 Space Pirate have been replaced by more solid lines in the metal as well as the layered grooves on the side of the case. Most of the dramatic curves once rendered in titanium are now in sapphire crystal which is a bit more graceful and plays nicely with the view of the incredible movement. 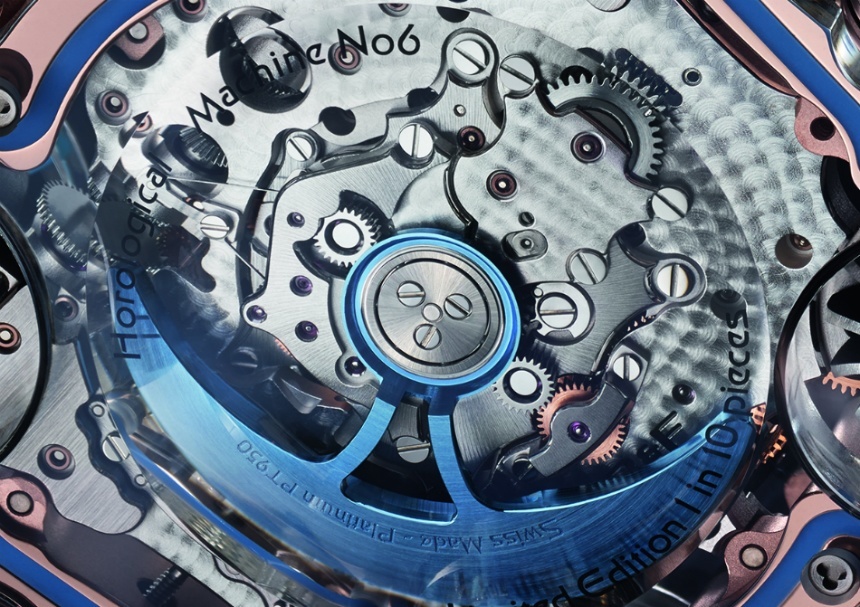 If anything, we are just as much fans of the HM6’s original mechanical movement as MB&F. Our David Bredan wrote a full article celebrating the MB&F HM6 movement here as a story unto itself. So it goes without saying that a design which is meant to expose more of this incredible and complicated movement gets our thumbs-up. 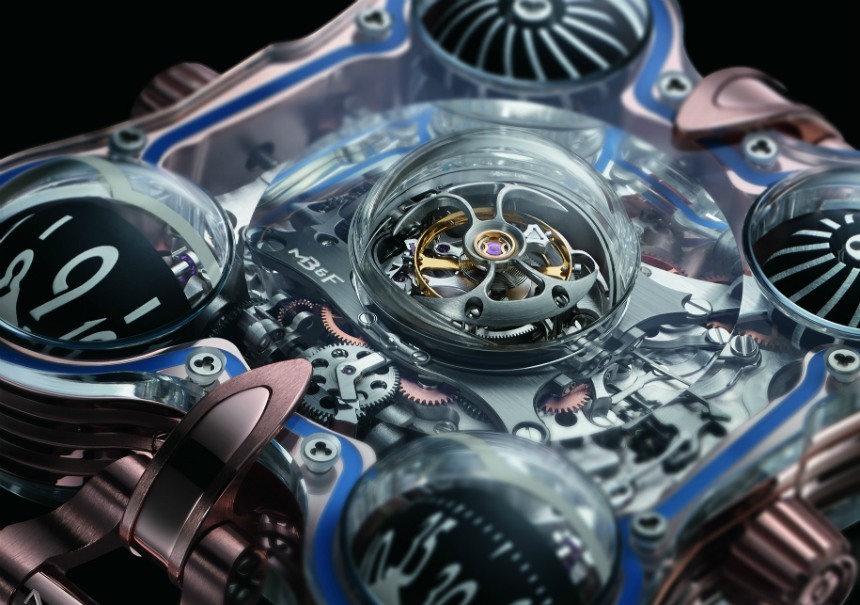 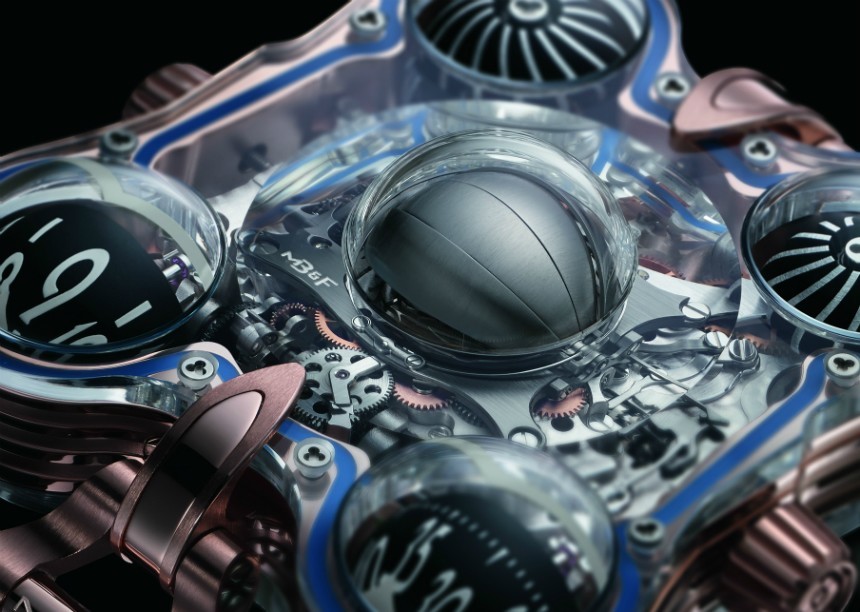 For a more in-depth discussion of the movement, I encourage you to visit that article, but I’ll give you the basics. Produced in collaboration with David Candaux, the MBF HM6 mechanism is made up of a 475 components and includes a flying tourbillon and automatic winding. Operating at 2.5Hz (18,000 bph), the movement has three days of power reserve and also has a manually operated titanium “shield” dome that can be opened or closed over the centrally-mounted flying tourbillon. 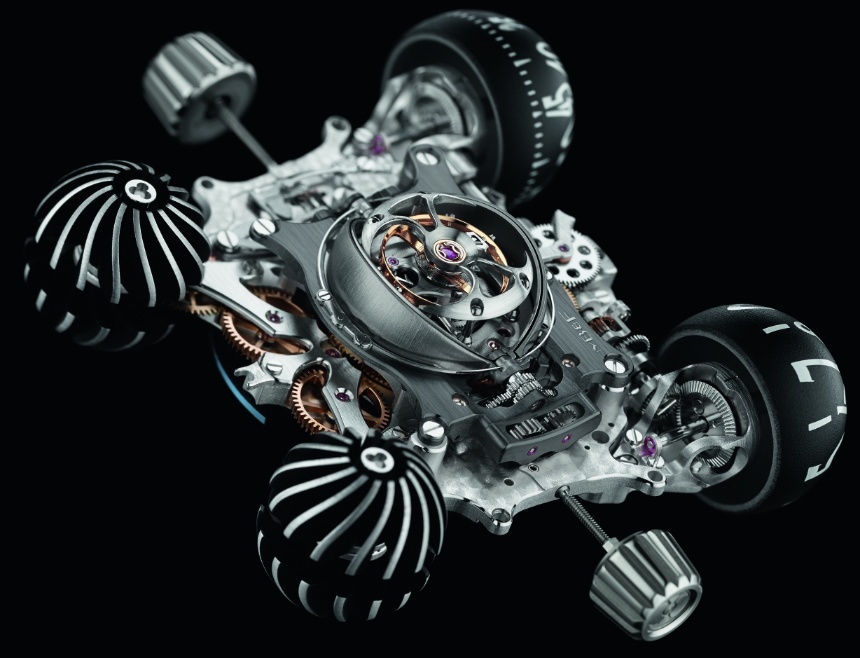 Spherical “turbines” toward the rear of the movement move with the automatic rotor which is produced from blued 950 platinum in MB&F’s typical “battle axe” shape. Time is indicated on separate domes for the minutes and hours opposite where the spinning turbines are located. The movement is truly a thing of beauty, and if you are ever compelled to spend this much on a timepiece, you should really settle for nothing less. 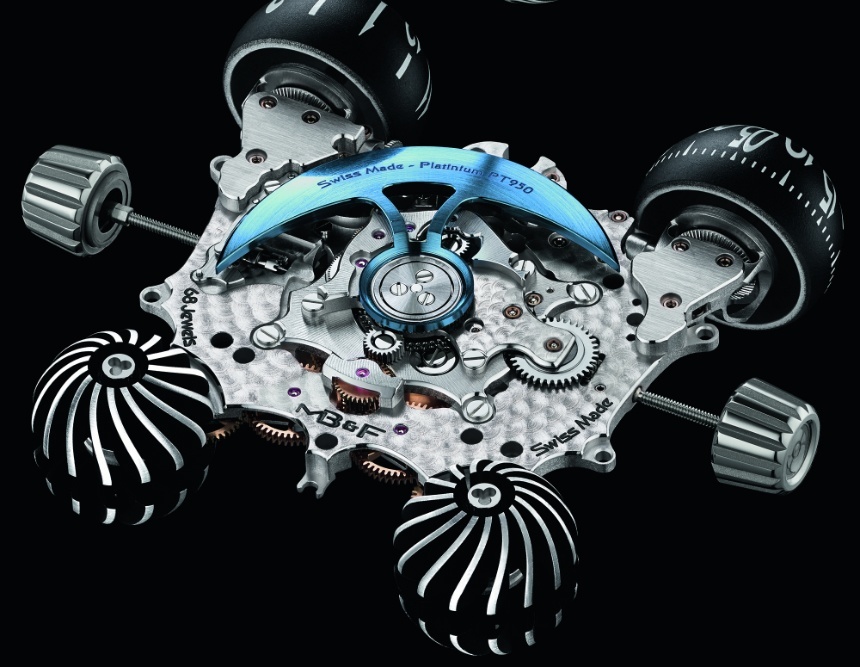 Wonderfully displayed, the HM6 movement is the centerpiece of the MB&F HM6 SV’s overall design rather than being hidden inside of the case. Now, the case serves as a frame for this central and most important element. MB&F truly re-imagined the HM6 with the MB&F HM6 SV, and in the future there will be even more variations, I am sure. 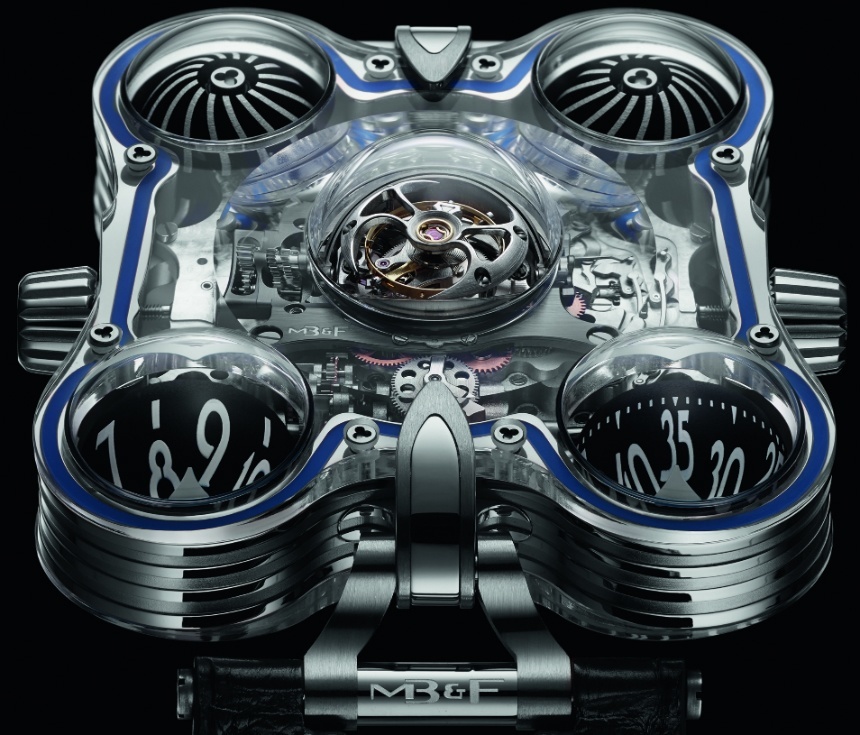 If the MB&F HM6 SV is anything like the HM6 Space Pirate, then it will wear a bit smaller on the wrist than its physical dimensions suggest. The watch is 51mm wide by 50mm long, and 22.7mm thick. Note that, while not by much, the dimensions of the MB&F HM6 SV are slightly different than that of the HM6 Space Pirate. In all, the Sapphire Vision version should wear marginally larger. The case is water resistant to 30 meters and produced from a total of 78 different parts. 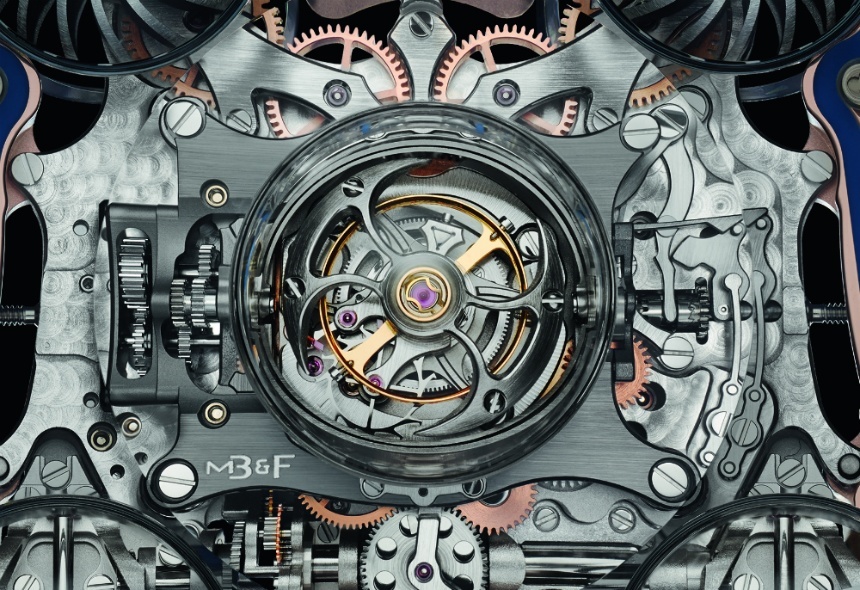 I will not hide the fact that I am very enthused by these MB&F HM6 SV watch designs in the abstract. As luxury art, I applaud the effort and execution and welcome these two MB&F HM6 SV models into the world. From a practical perspective, you really need to be the right type of watch collector to invest in these. Note that they will each be highly limited as the entire Horological Machine No. 6 collection (all versions from the HM6 Space Pirate to whatever MB&F decides to produce next) will be limited to 100 pieces. Exotic, exclusive, and expensive, the MB&F HM6 SV will be all but a fable for most watch lovers, and I am sure all that people need is yet another elusive “grail watch” to add to their wish list. So take that as my minor level of irritation that here is yet another watch I’ll be lucky enough to wear for a short amount of time, and never get to stroll around town with and call my own. 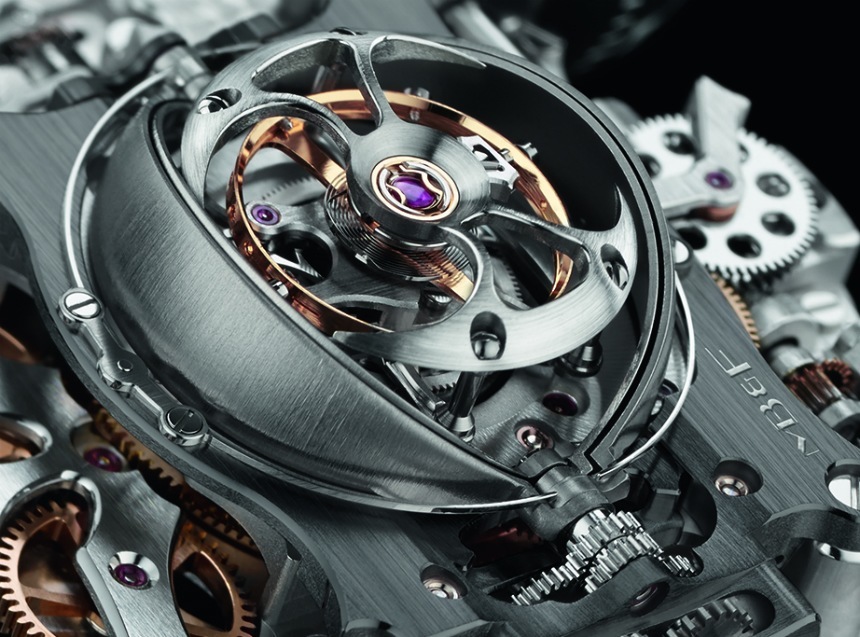