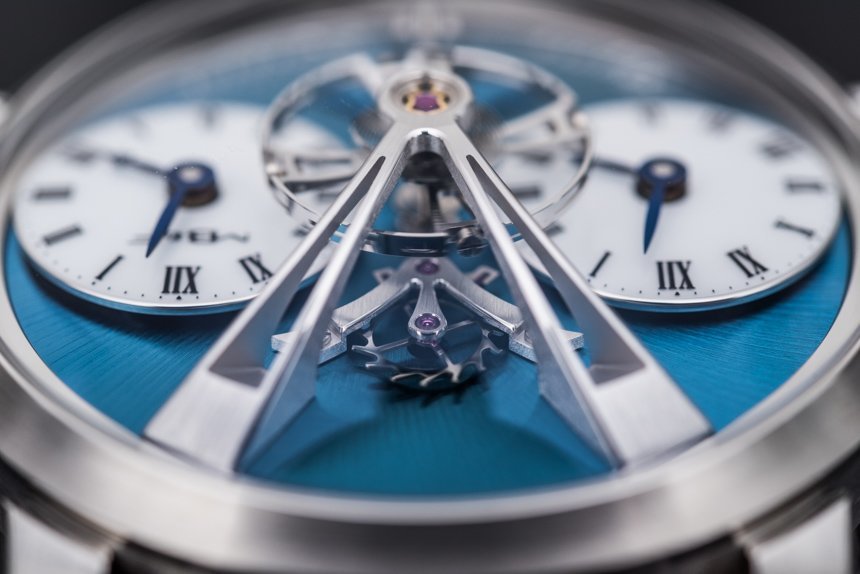 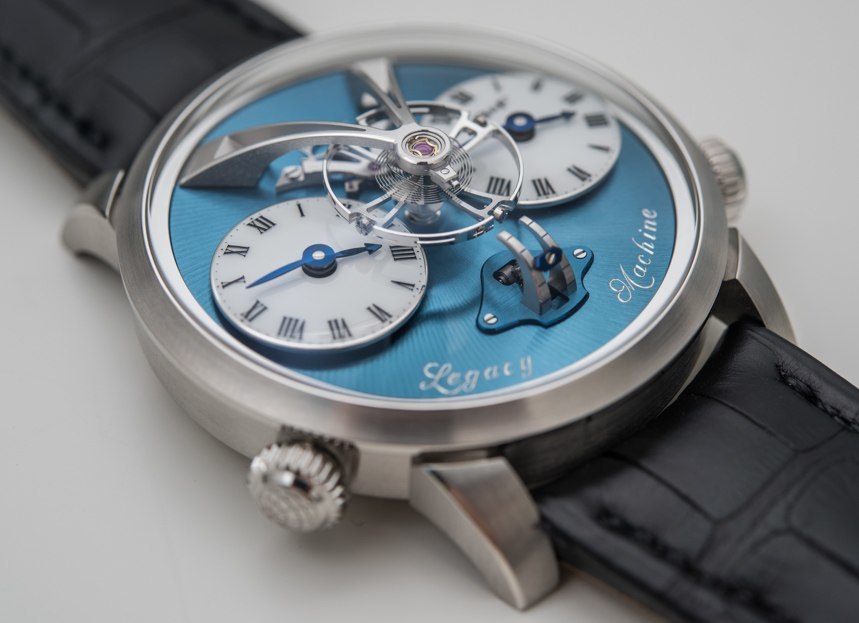 It was back in 2011 when Geneva-based MB&F totally changed their corporate image by releasing the LM1 which debuted the new Legacy Machine collection of timepieces. I’ve written about this topic at length in the past, but MB&F prior to the LM1 watch produced exclusively modern Horological Machines and items within that collection. The first Legacy Machine added a more “traditional” side to the MB&F brand that fans did not expect. 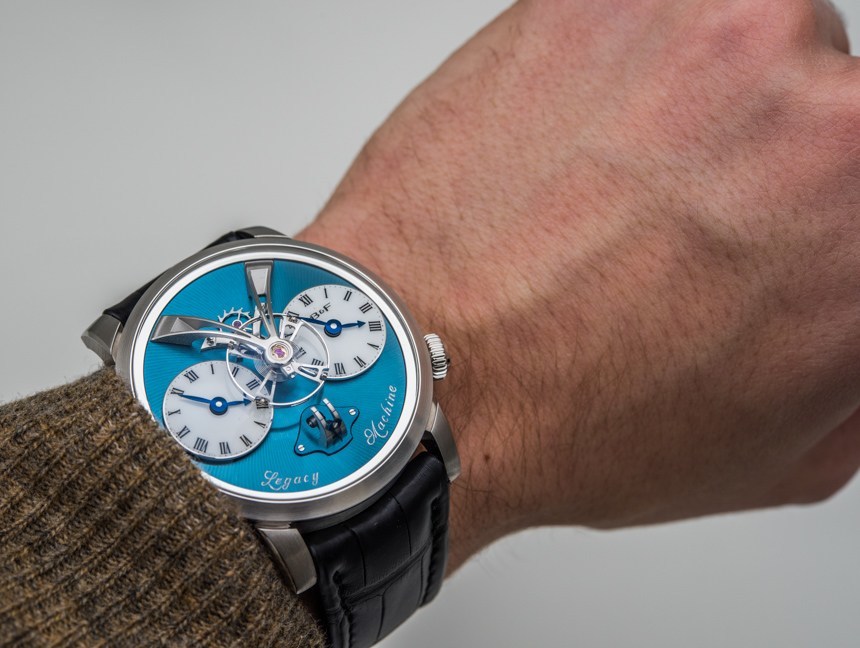 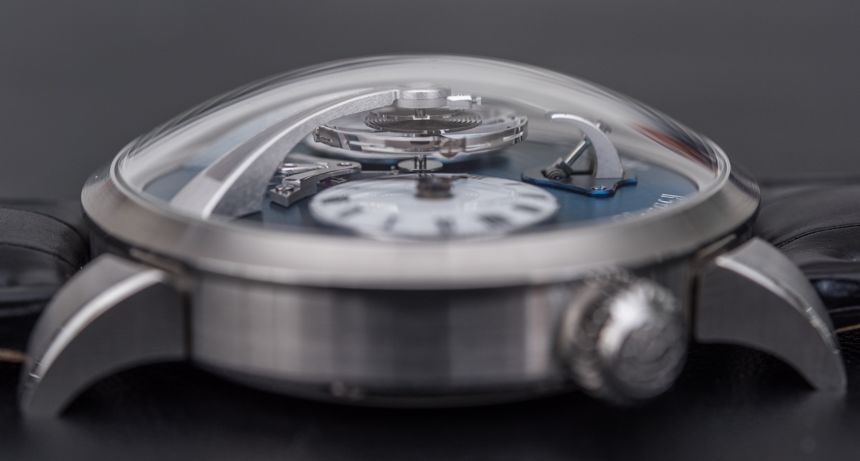 Today, several years later, the beautiful Legacy Machine (LM) products by MB&F are still at odds with the futuristic theme of their Horological Machine (HM) products, but no one seems to notice or be bothered by that fact any longer. The attractive design and desirable movements in the MB&F Legacy Machine watches helped solidify their place in MB&F’s product catalog. Two years after the launch of the original MB&F LM1 watch collection, MB&F followed up with the even more complicated (and expensive) MB&F Legacy Machine 2 set of watches (review here). Among those MB&F LM2 watches was a particular limited edition of 18 pieces that came in a platinum case with an “electric blue” dial at a price of $190,000. 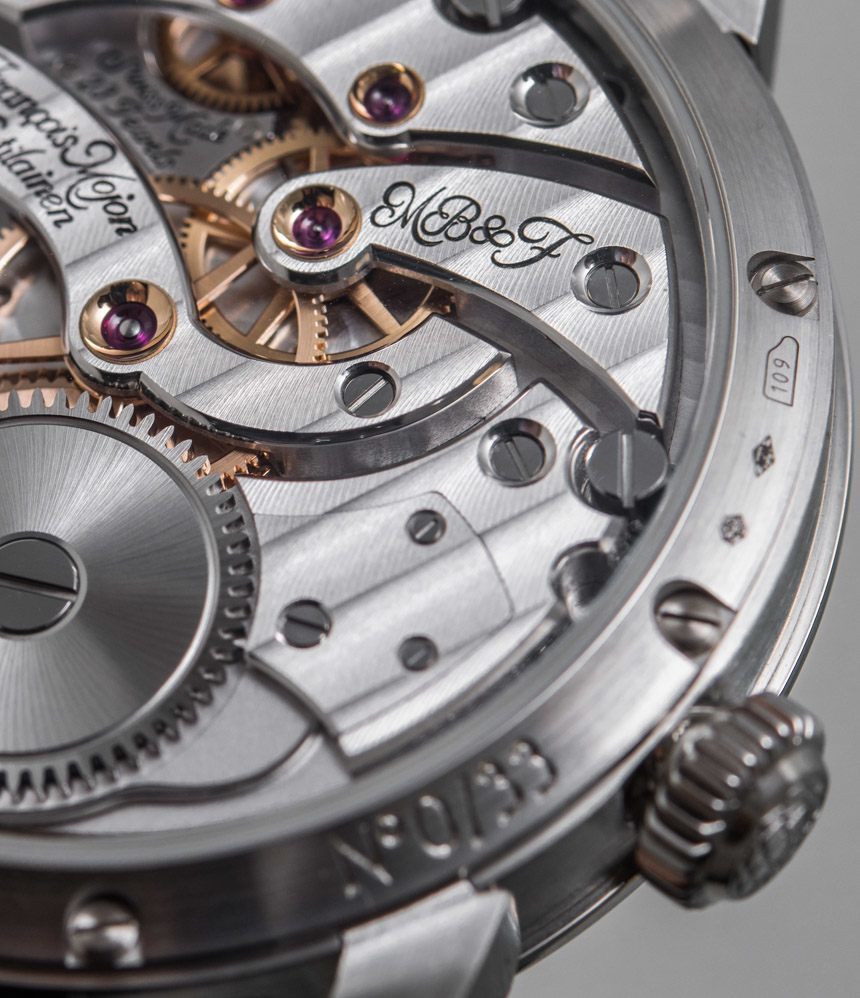 MB&F claims that this platinum and blue version of the MB&F LM2 quickly became a hit – and who would deny that, given the lovely combination of colors and high-end materials. Everyone loves a heavy platinum watch mixed with some attractive blue elements. Platinum is so wildly emotional a value proposition given its rarity (and not much else that is particularly useful in a watch) that part of the enjoyment of wearing a platinum-cased timepiece is wearing a large one. Why? Just so you can spend more on additional platinum metal? Well that is part of it, but more specifically, I am talking about the decadent feeling you get when wearing something so heavy and dense… and knowing how valuable it is. 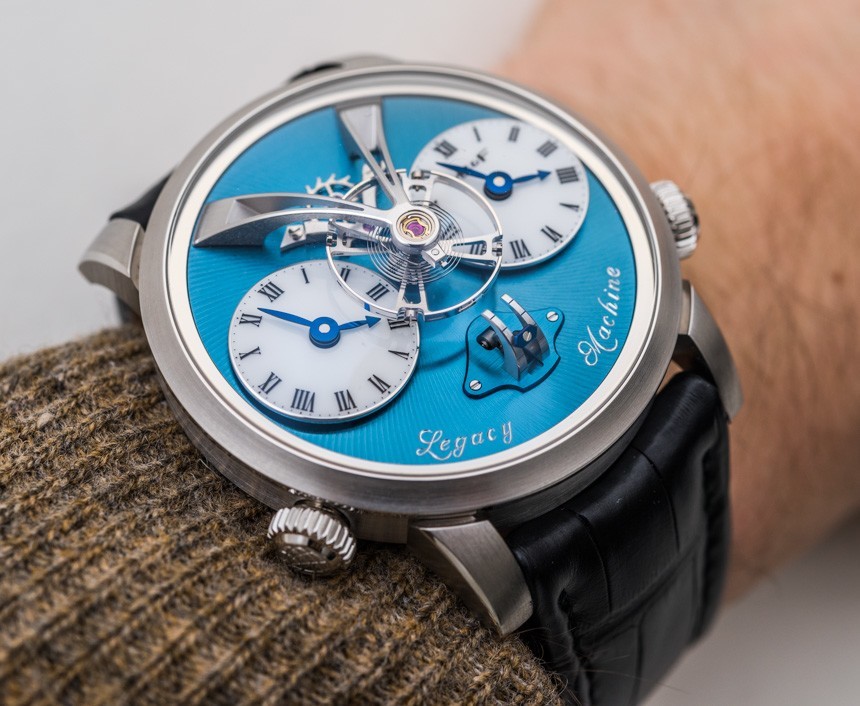 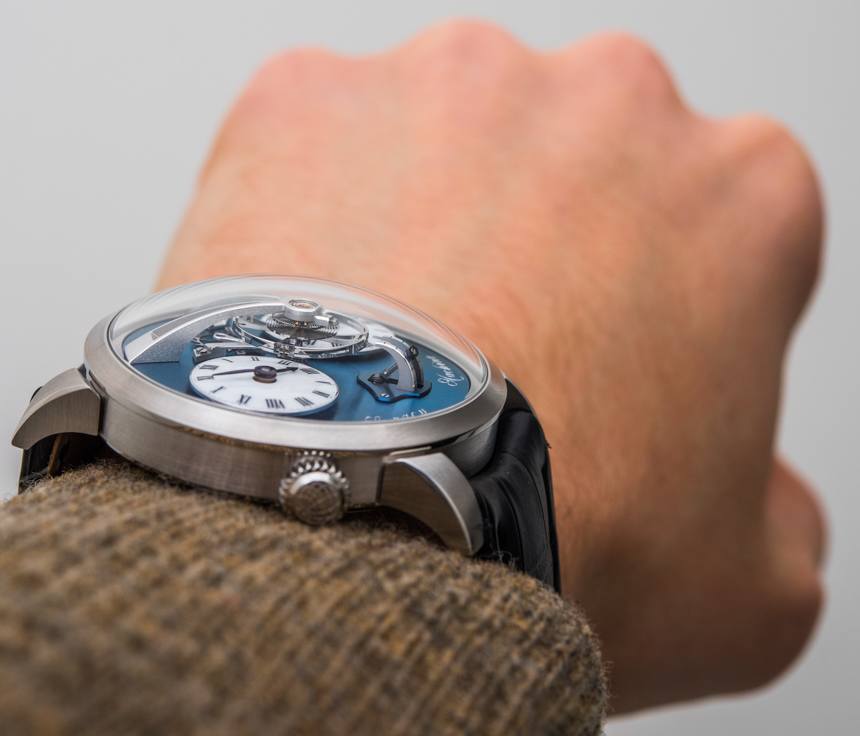 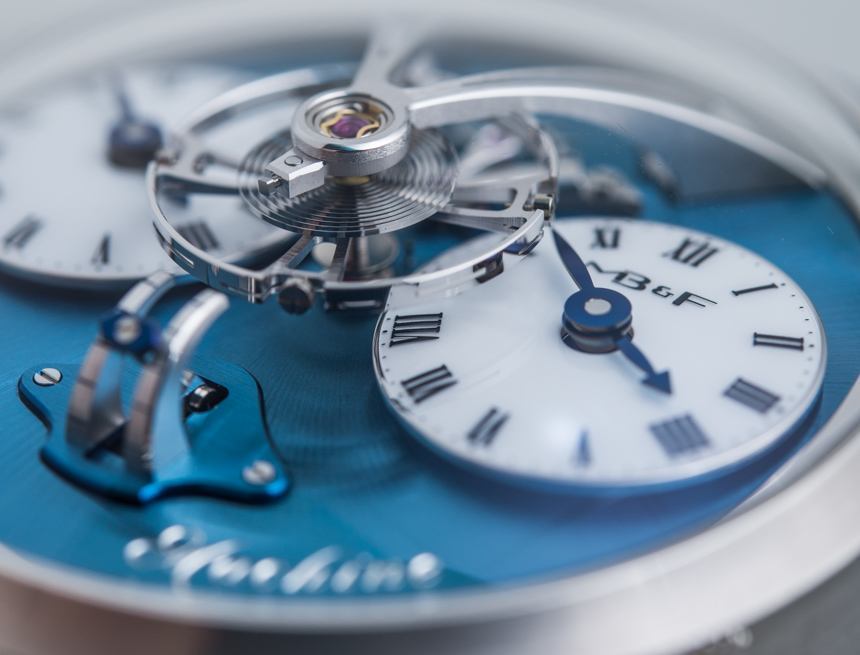 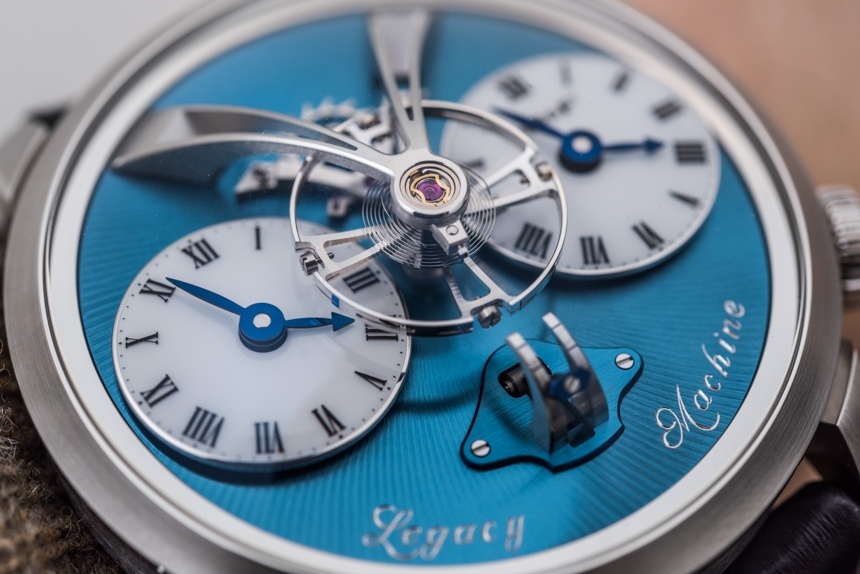 Few words are required to explain the almost immediate visual appeal of this particular combination of colors and materials in the classically-themed MB&F Legacy Machine 1 watch. I will note that for whatever reason “blue dials” are a huge trending thing in the watch industry – especially for 2015. I don’t know what it is, but we are seeing more interesting blue-dialed watches now than I recall ever seeing in the years past. It isn’t that watches with a blue-colored dial are anything new, but rather that so many good ones are coming out this year. 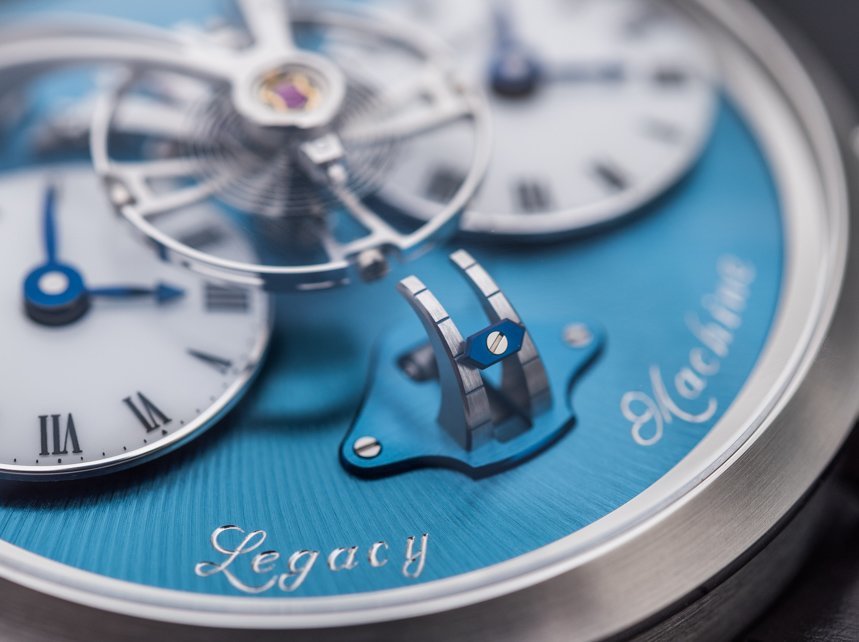 What do I mean by a “good” blue watch dial? That is a good question. Not all blues are created equally and to create an industrially reproducible blue color for watch dials that looks attractive is actually very difficult to do. Blues are one of those colors that can look great or terrible with just a few small differences. Getting colors on worn products correct is an art, and in the context of watches, a huge amount of effort is required. For that reason, when MB&F “discovered” this particular shade of PVD-coated blue, it was excited enough to know that it would make for good use on a range of products. 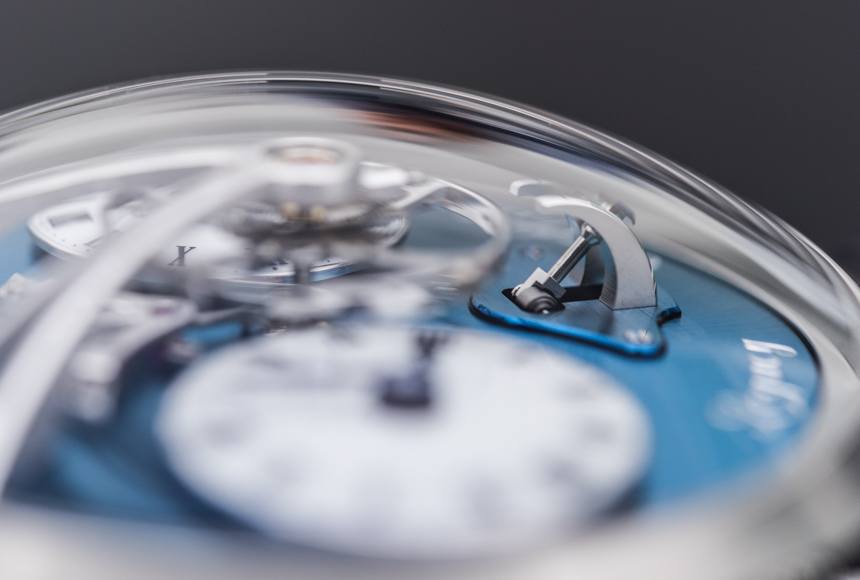 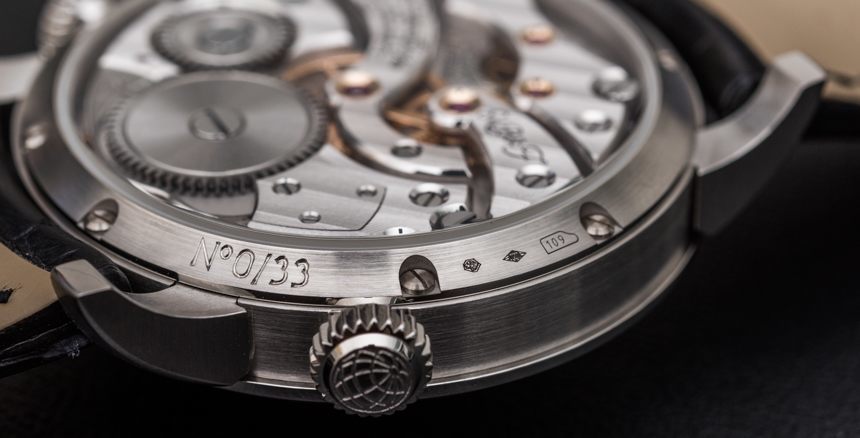 The MB&F LM1 watch is typified by a watch face with two subsidiary dials, a “linear” power reserve indicator that looks like some sort of tiny medieval catapult, and a large suspended balance wheel oscillating over the center of the dial. Each of the dials for the time can actually be individually set down to the minute, so it is like having two separate watches in one movement. 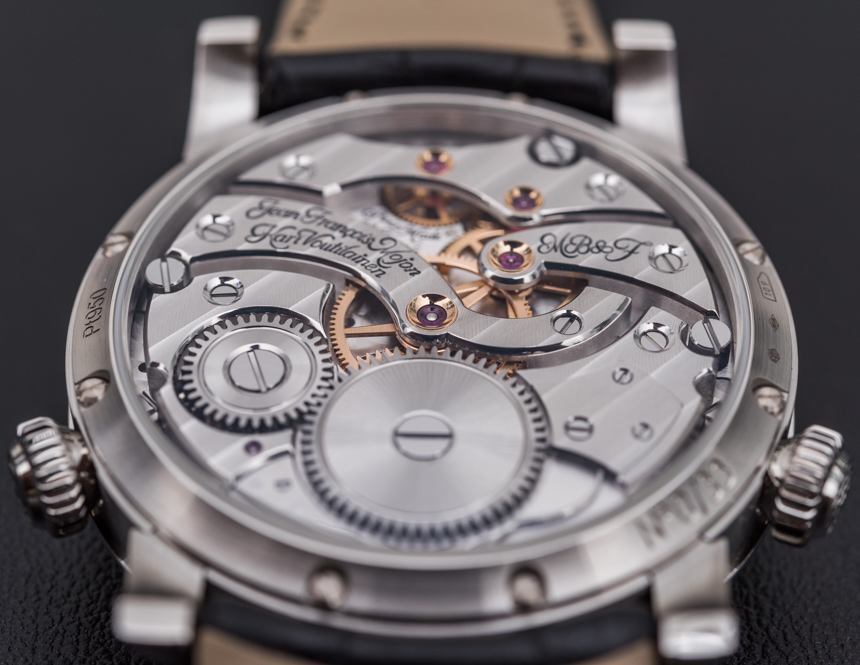 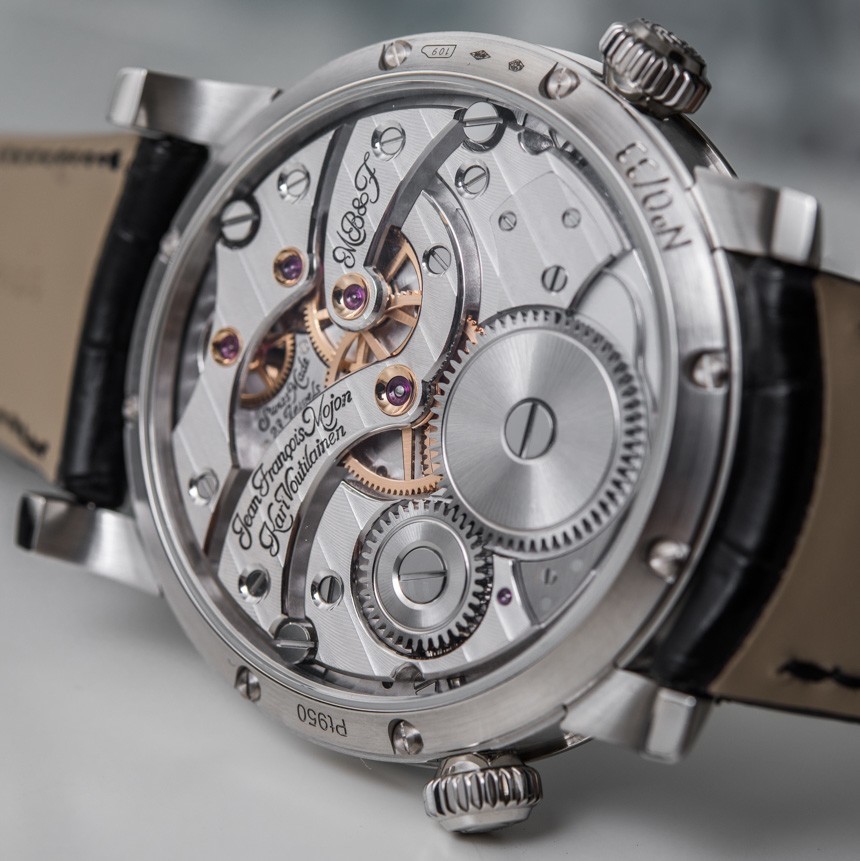 Kari Voutilainen’s workshop finishes all the movements inside the MB&F LM1 watches – and that is a beautiful thing, given how much of a fan I am of Voutilainen’s work as well as that of Max Busser and MB&F (Jean-Francois Mojon designed the movement, which is why his name is on there as well). The movement takes up the entirety of the back of the watch caseback window and is a beauty to behold – truly something that a few years ago I would never have guess to be something with an MB&F name on it (in cursive, of all typographical styles). That is especially true with how emphatically “old school” the movement is trying to be, with its almost cartoonish nod to the past, as seen in the curvy bridges and large gold chatons where the rubies are placed. 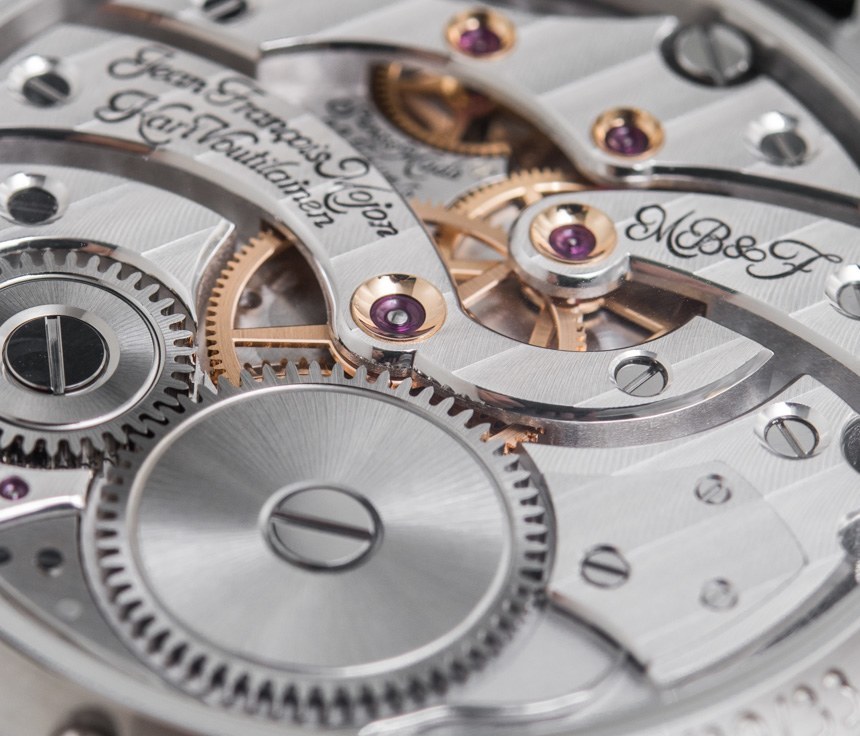 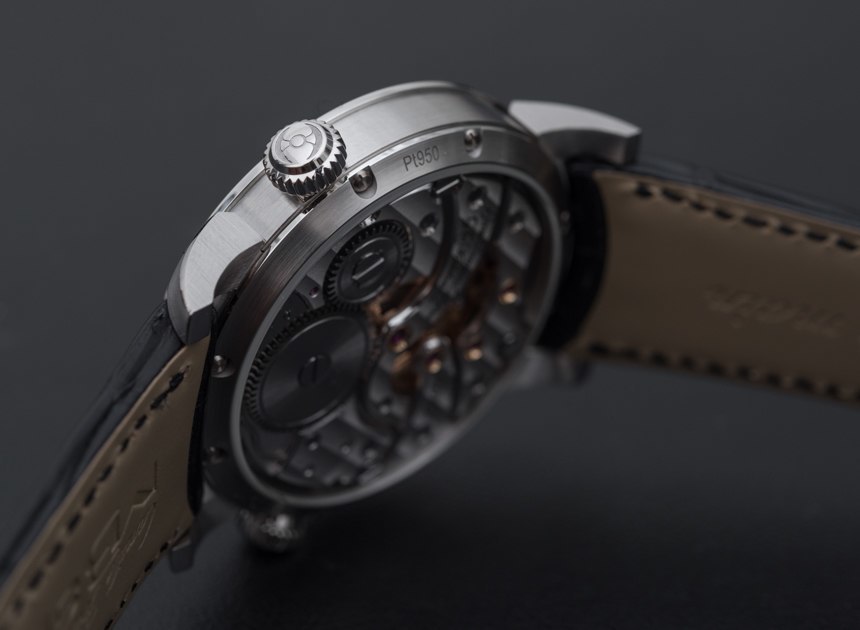 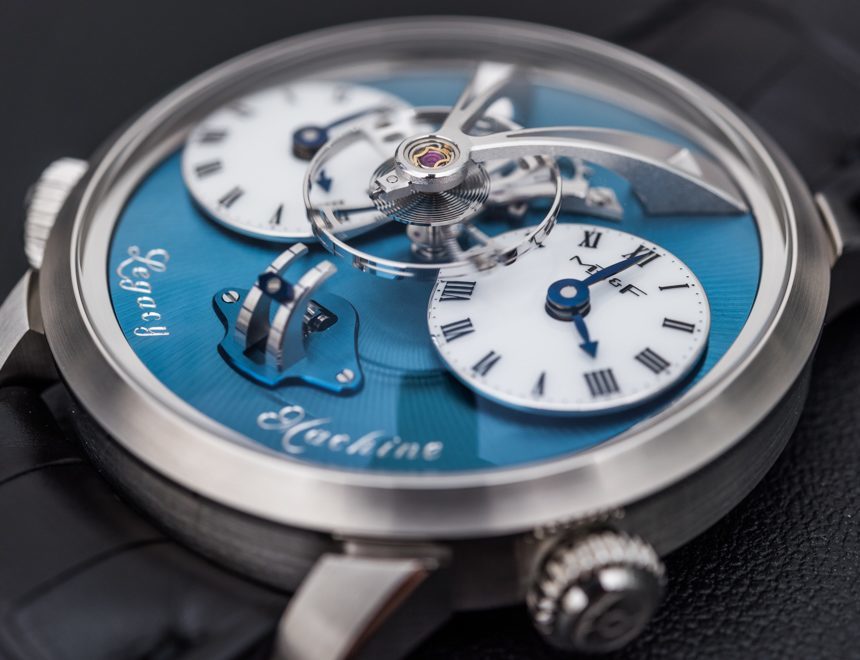 Now a few years after the MB&F Legacy Machine 1 debuted, I still think that it is an exemplary design and one that I’d love to have. If money were at my will to control, then it would most certainly be this platinum-case version of the MB&F LM1 with the deliciously enticing blue dial. Price is $114,000 and it is limited to 33 pieces. mbandf.com