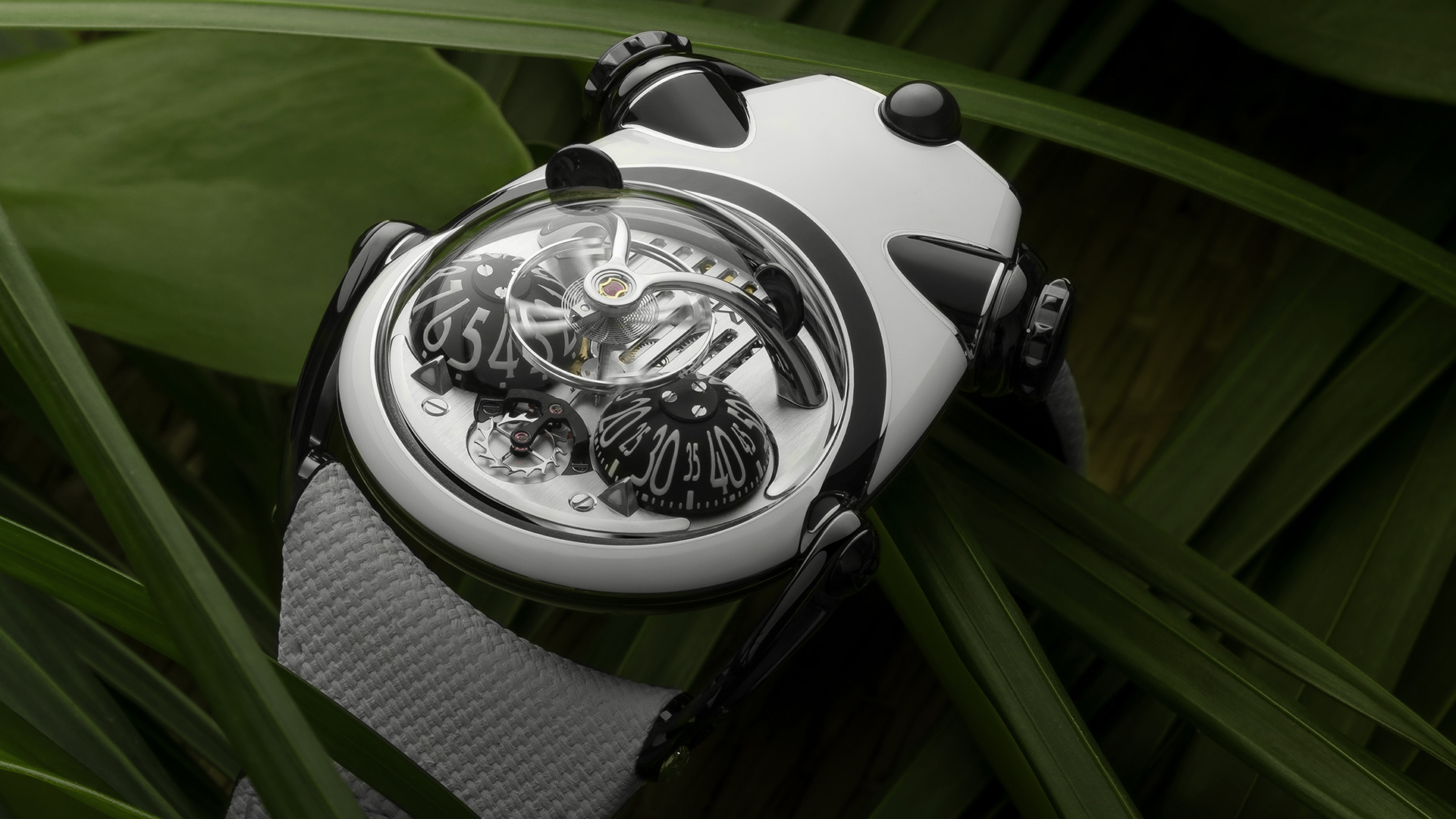 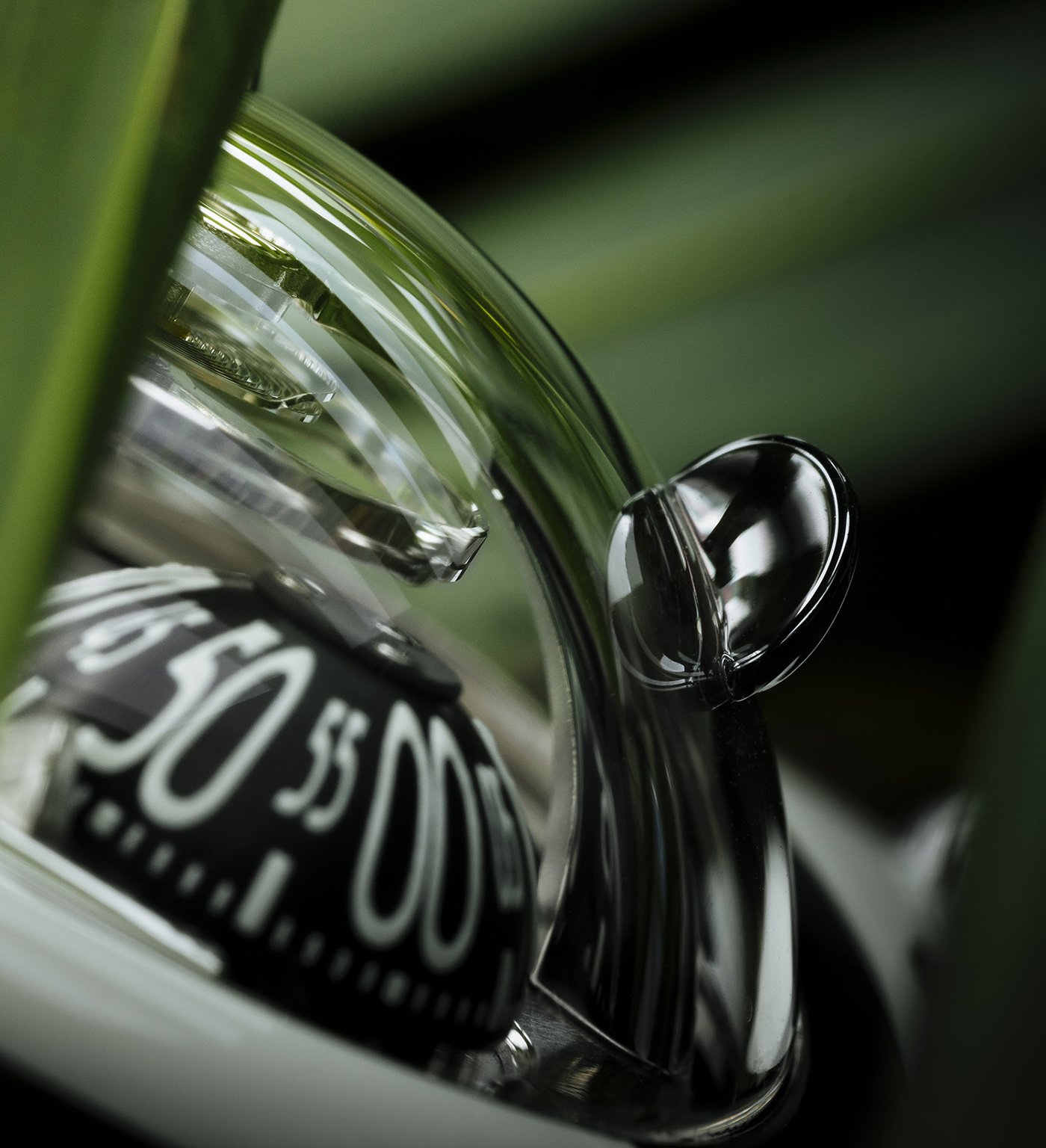 In the current ultra-competitive boutique haute horlogerie market, few independent brands garner as much attention from enthusiasts and industry insiders alike as MB&F. Since 2005, the avant-garde marque has spent its time dramatically reinterpreting the basic form of the wristwatch with playful Flash Gordon-esque retro-futuristic streamlined concepts, and this creative spirit shines through most strongly in its series of anthropomorphic designs. During the initial announcements for the Only Watch 2021 charity auction in July 2021, MB&F announced its latest animal-themed creation, the HM10 Panda, through a series of watercolor illustrations. As the event draws closer MB&F has released full details on this playful one-of-a-kind release, and its bright monochrome departure from previous entries in the Horological Machine line. The pièce unique MB&F HM10 Panda is a streamlined and cuddly riff on one of the brand’s most adventurous recent releases, with new finishing techniques and a dedication to raising funds for Duchenne muscular dystrophy. 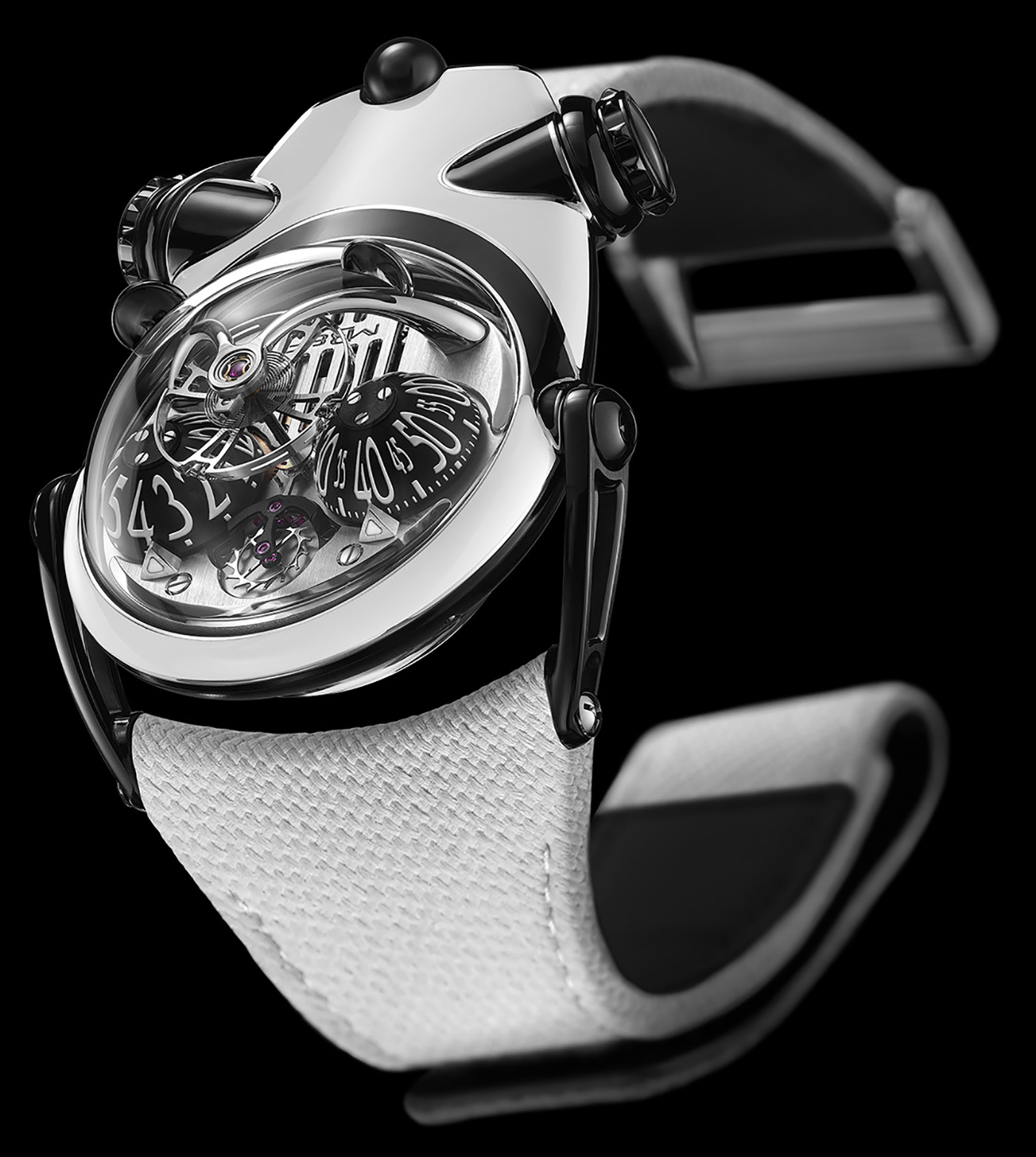 At 45mm wide, 54mm from lug to lug, and 24mm thick at the highest point of its exaggerated domed sapphire crystal and caseback, the case of the MB&F HM10 Panda should offer a standout presence on the wrist. Even more than the size, the HM10 Panda’s unique asymmetrical sci-fi design gives it a presence miles apart from the standard wristwatch formula. Based on 2020’s HM10 Bulldog design, the hinged lugs, sweeping lozenge-shaped case, and ultra-tall domed sapphire crystal work together to create a panda bear for the wrist. The panda’s black and white coloration is achieved through a multi-piece case design, with lacquered stainless steel in black and white for the top side of the case, while the caseback and lugs are finished in black PVD-coated Grade 5 titanium. While the overall form is shared with the HM10 Bulldog, the HM10 Panda completes its panda bear look with a spherical black ceramic “tail” ornament at 12 o’clock and a pair of rounded PVD-coated Grade 5 titanium “ears” attached to the crystal. With such an avant-garde, stylized design, it’s clear that the MB&F HM10 Panda is not made for heavy sporting use, however, the watch manages a light but better-than-expected 50 meters of water resistance. 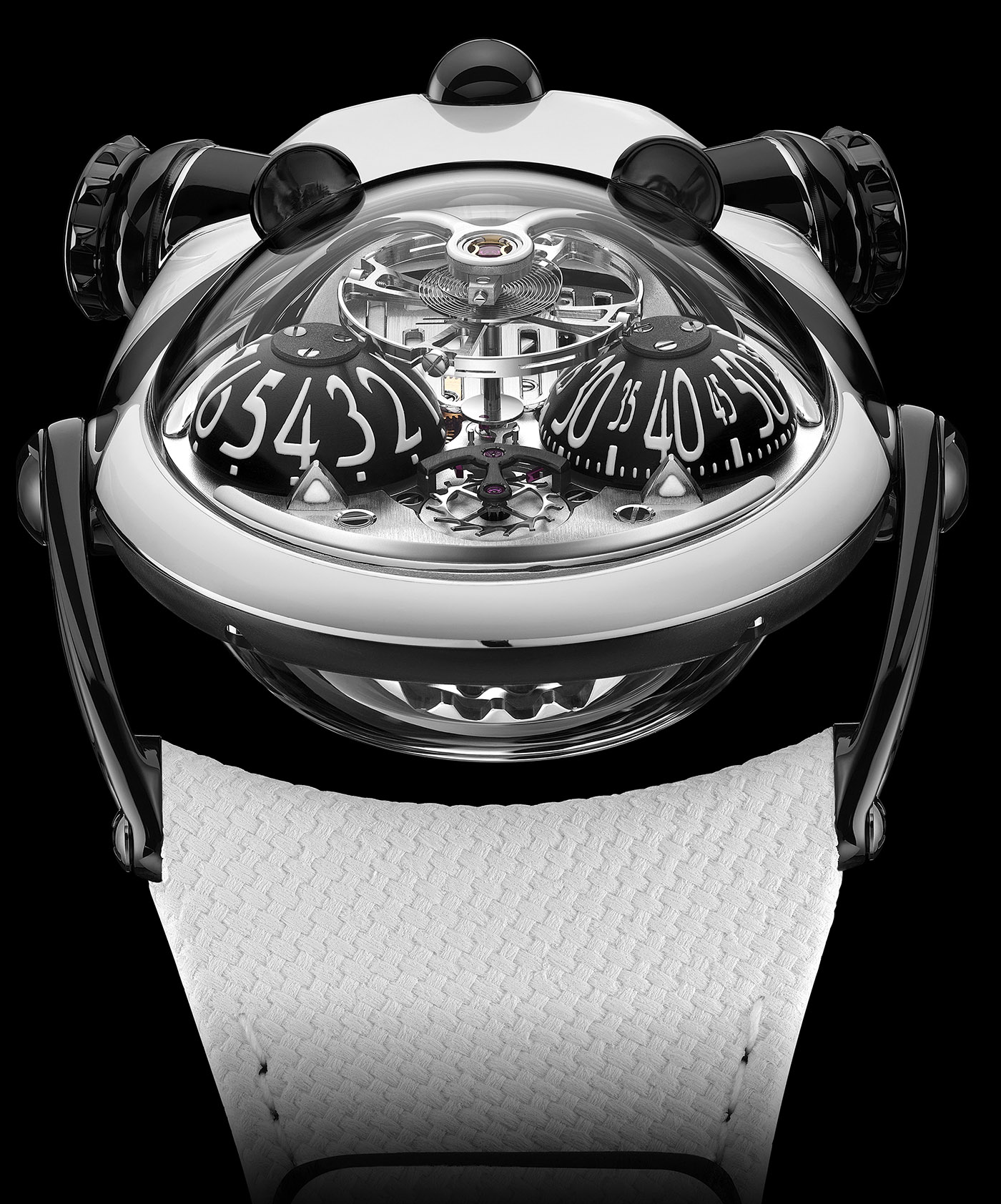 Like the case, the dial of the MB&F HM10 Panda is less of a traditional dial and more of an exercise in deconstructivist anthropomorphic design. Like the HM10 Bulldog it’s based on, the HM10 Panda’s “face” can be seen most clearly from the 6 o’clock side of the case, where elements of both the main skeleton dial and the caseback come together to form the image. Timekeeping is handled by a pair of domed rotating disk hands in black that form the HM10 Panda’s “eyes”, while beneath the beltline of the case a pair of hinged brushed and polished “jaws” form a stylized power reserve indicator – when the HM10 Panda’s mouth is closed, the power reserve is completely empty, but when all the polished teeth are exposed the movement is fully wound. MB&F’s signature sweeping, architectural floating balance bridge dominates the view beneath the main crystal otherwise, and beneath this sleek polished element is a nearly full brushed bridge with a small window at 6 o’clock for the escape wheel. Taken as a whole, the character-focused multi-window dial design of the HM10 Panda is an imaginative and playful example of the brand’s creative approach to watch design, with an ethos that approaches watchmaking as a sculptural art form first and foremost. 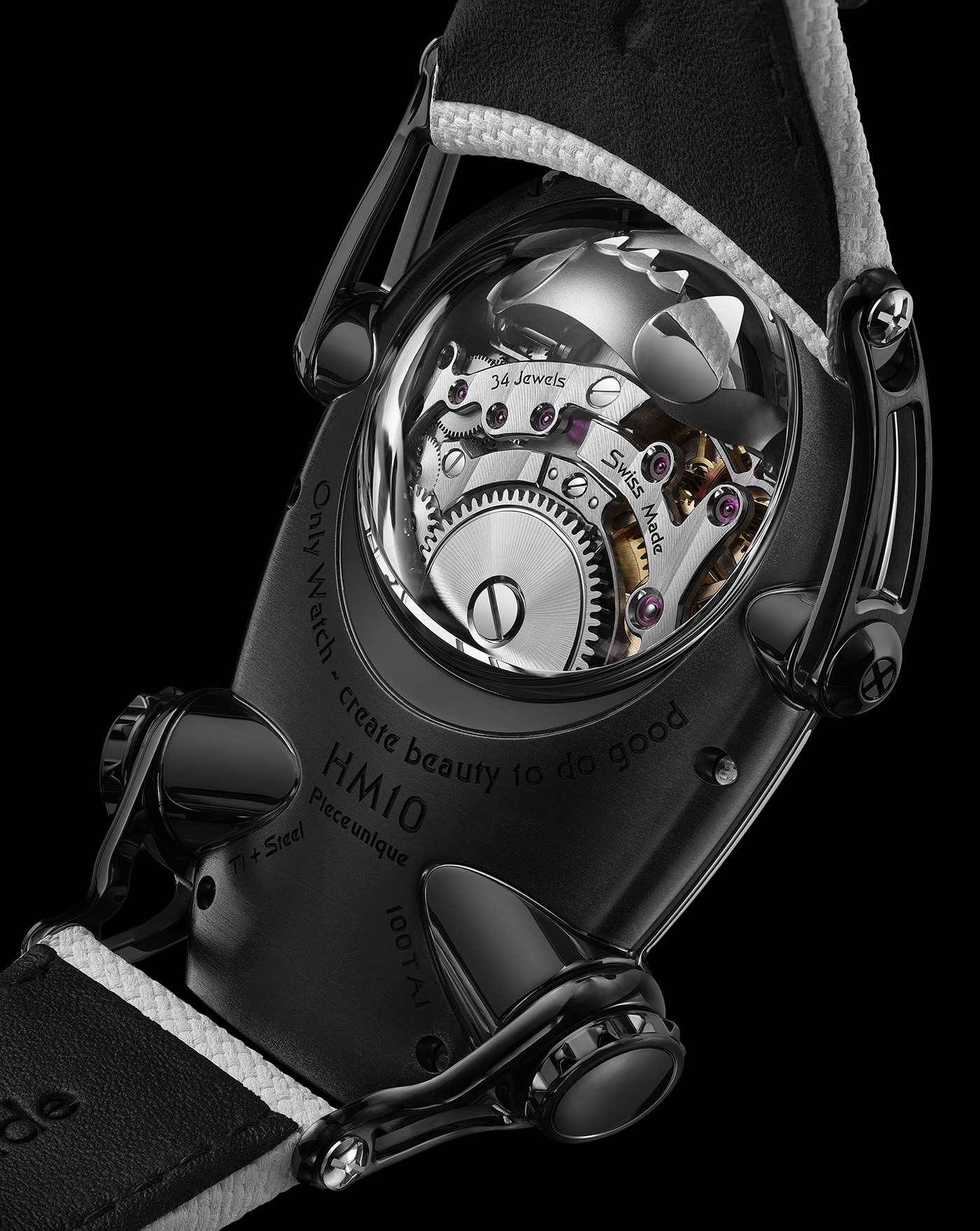 Carried over from the HM10 Bulldog, the in-house hand-wound HM10 movement inside the MB&F HM10 Panda is as unorthodox as its case and dial designs. This twin-crown design uses dedicated crowns built into the “rear legs” of the case for winding and time-setting, and outside of its stylized anthropomorphic elements uses a handsomely executed traditional suite of finishing techniques across its plates and bridges including Côtes de Genève, polished chamfered edges, and a light arabesque finish atop the single mainspring barrel. In terms of performance, the HM10 movement offers a 45-hour power reserve at a steady 18,000 bph beat rate. MB&F pairs this retro-futuristic design with an equally dramatic tapering Velcro-fastened woven strap with black leather lining. 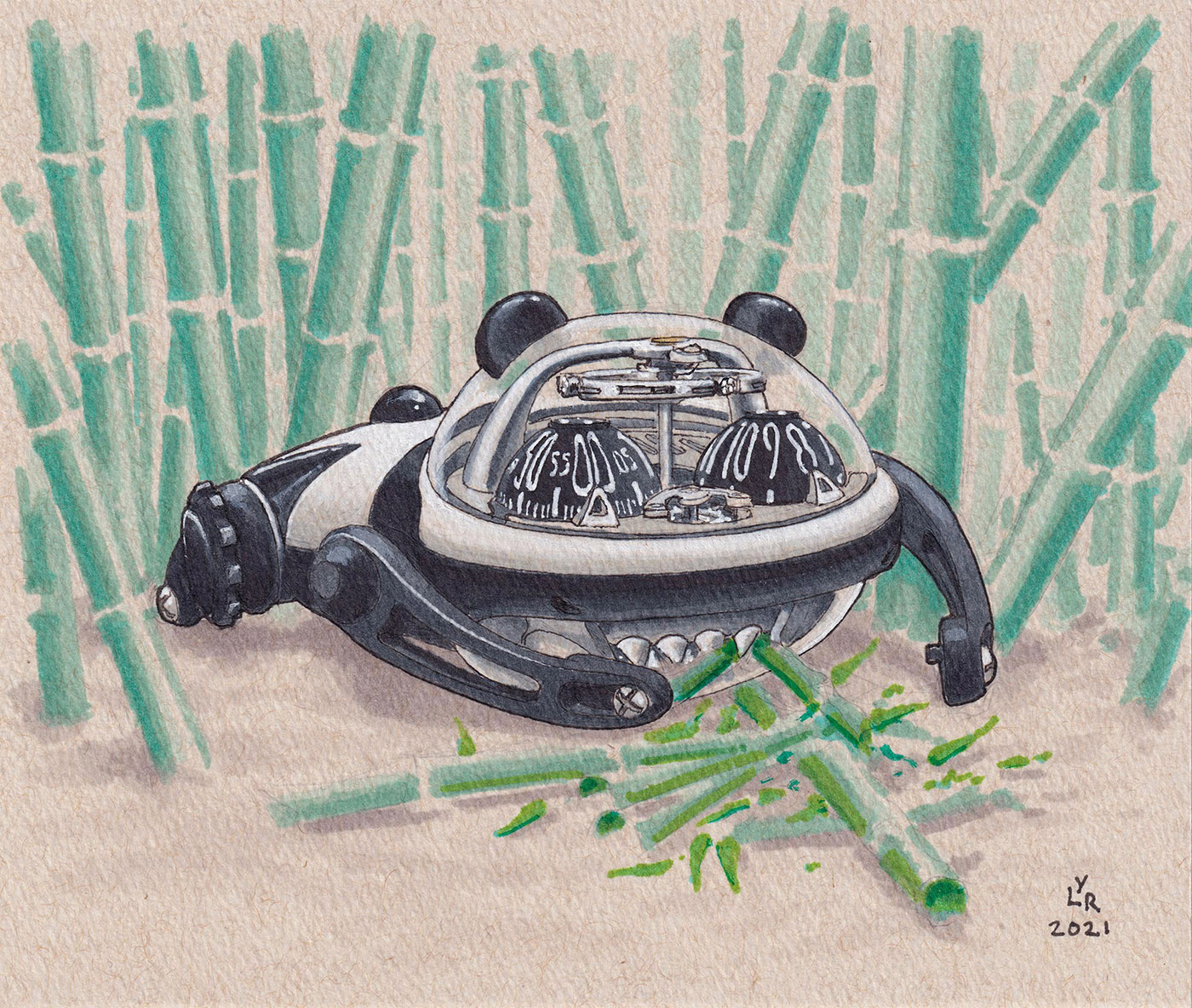 With new case finishing techniques, added animalistic features, and a clean monochrome colorway, the pièce unique MB&F HM10 Panda is one of the most unique and stylish entries into Only Watch 2021. The sole example of the MB&F HM10 Panda will be auctioned off at Only Watch 2021 in Geneva on November 6, 2021, with 99 percent of the proceeds going to support research in treating and curing Duchenne muscular dystrophy. As this is a one-of-a-kind release with no intention for a wider release, MSRP information is not available for this watch. For more details, please visit the brand’s website.