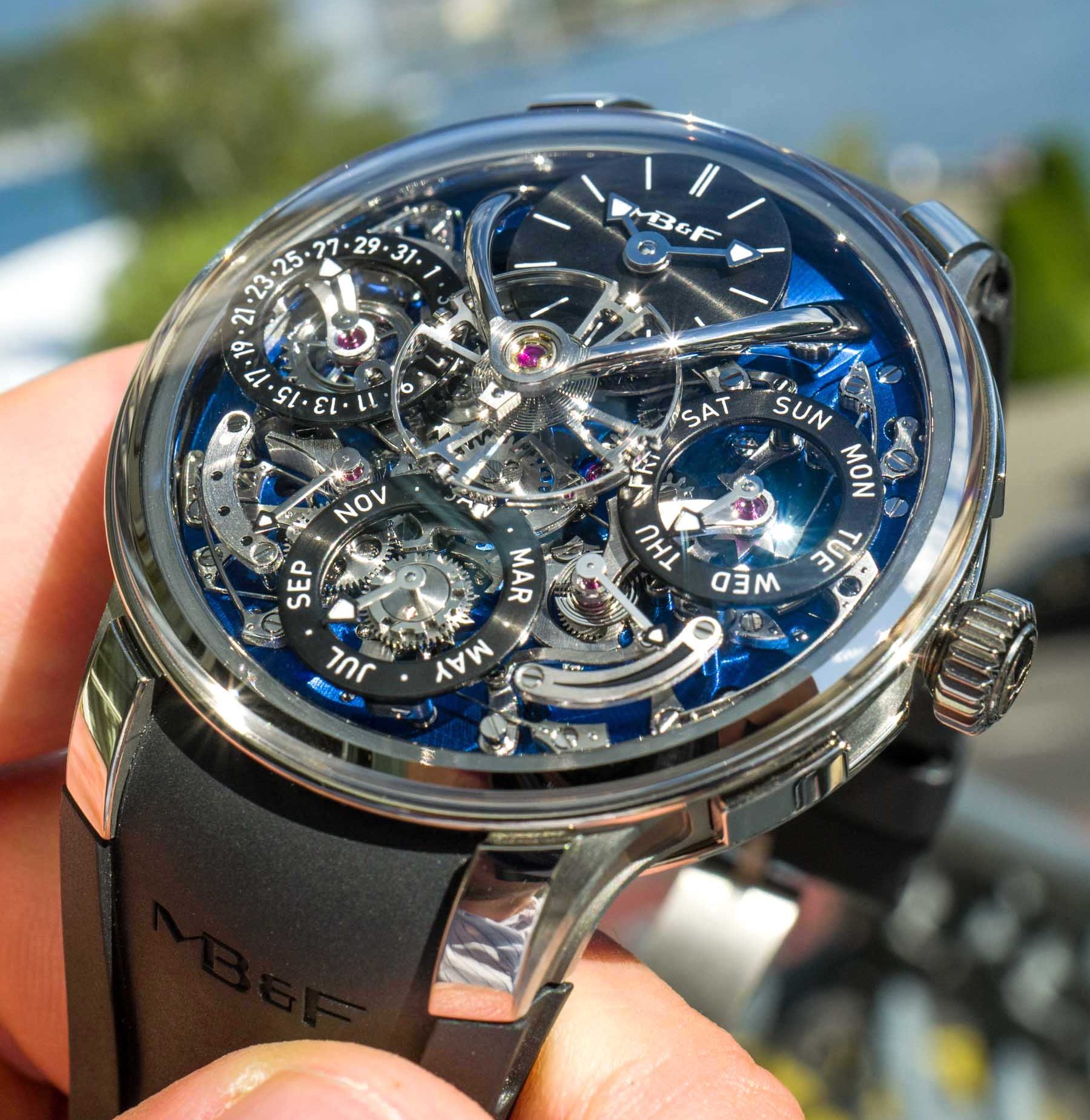 Sports-capable luxury watches are all the rage these days — and what better proof do you need for that than the launch of the first-ever MB&F engineered for an active lifestyle? Behold the MB&F Legacy Machine Perpetual Evo, a beautiful and beautifully made mechanical watch that takes the odd concept of the “beater luxury watch” to a whole new level. 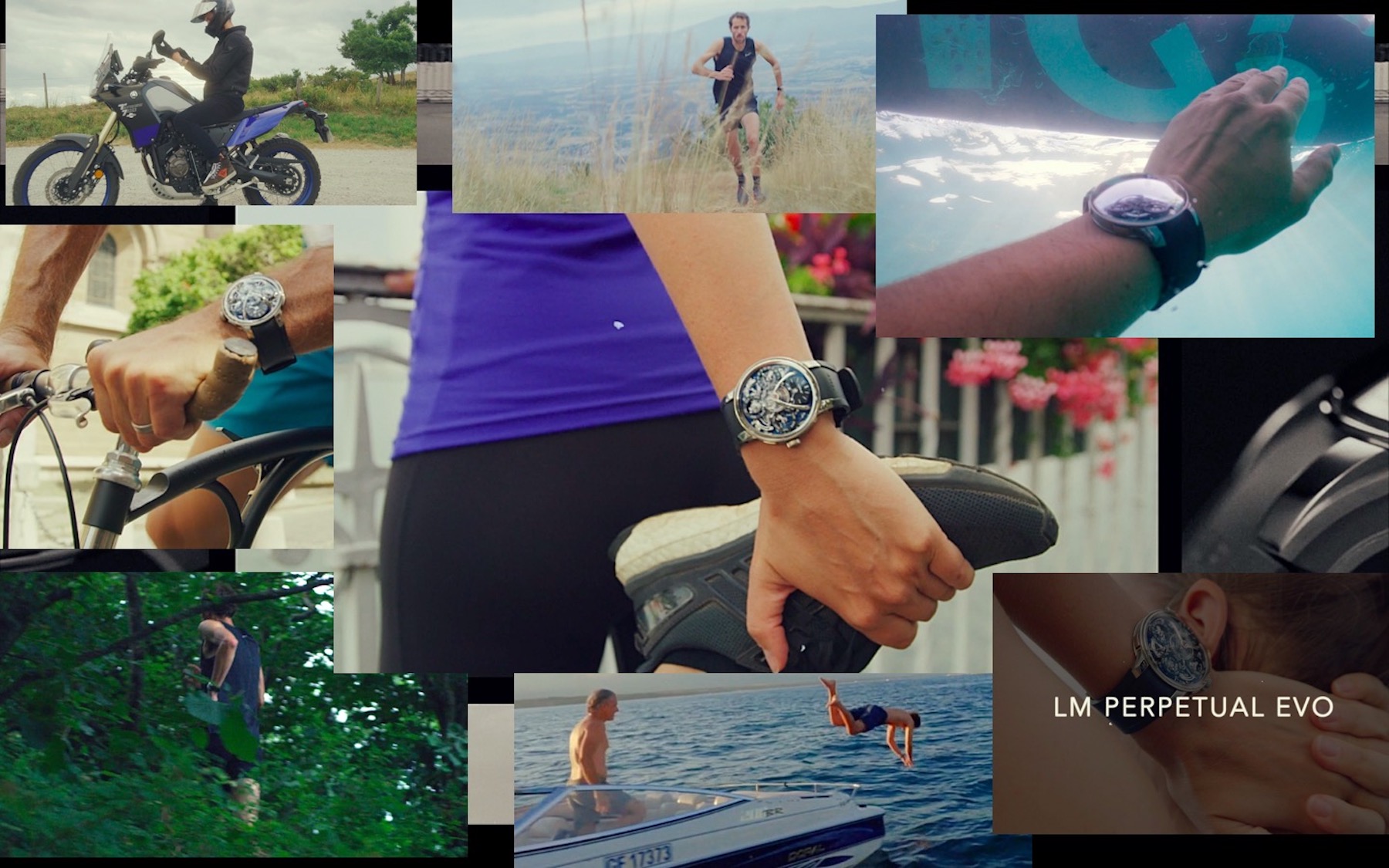 Hands-on impressions in a moment, but first a reflection on the video MB&F launched the 3 x 15 pieces of its evolutionary Legacy Machine Perpetual with. Beautifully produced and featuring members of the MB&F team, the video shows people running in the wild, head-diving into the sea, and, for the most extreme of use scenarios, cycling and running in Geneva — probably the most dangerous legal (for the time being) activity in all of Switzerland. The watch and its countless exposed components glisten and sparkle, while the specially domed sapphire crystal and zirconium case gently glow in the light. And as I’m witnessing this, multiple times I find myself swallowing outcries like, “Ouch!” and “Don’t do that, you loony!” — even though I’m sitting in front of my laptop all on my own. In other words, capable the MB&F Legacy Machine Perpetual Evo may be (and we’ll see in a pinch that it is), seeing people wear such a remarkable timepiece while running and cycling in town or the wilderness is as adrenaline-pumping an experience as an action movie. 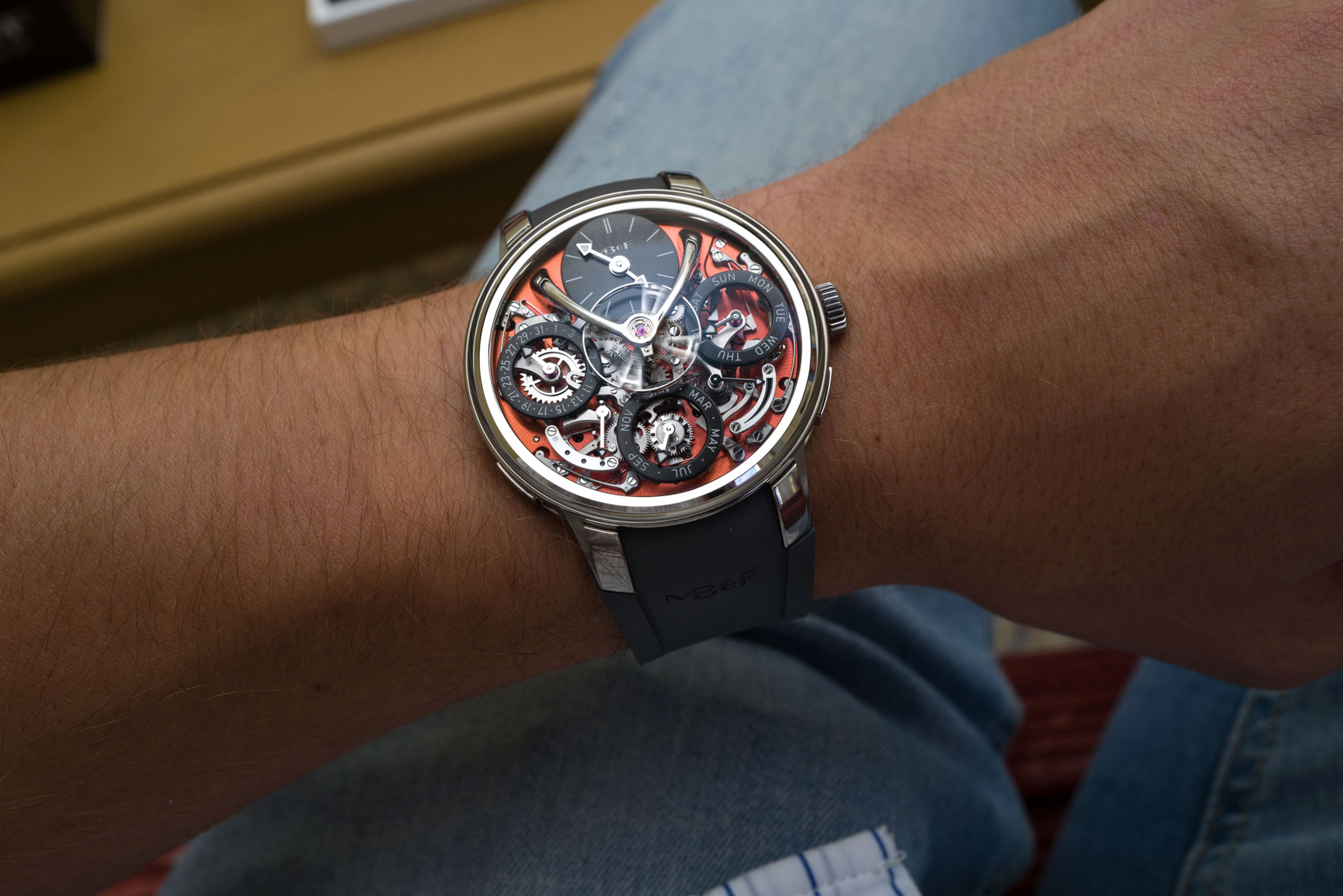 And yet, once you have this 44mm x 17.5mm horological creation on your wrist, it all starts to make sense. It’s the sort of watch you don’t ever want to hand back, let go of, or even take off. So yeah, on that basis, I guess you do end up running with it in Geneva, the city you would least expect to have such a life-threateningly high number of unapologetically French cyclists and jaywalkers. Having seen nigh-on every variation of every MB&F timepiece created (lucky me), I rank MB&F among those brands with the highest hit-count of never-wanna-take-off watches. And the Legacy Machine Perpetual, with its — you guessed it — perpetual calendar and eye-wateringly beautiful presentation of fine watchmaking is another one I, and I presume many of us, would happily have as our only watch to wear. 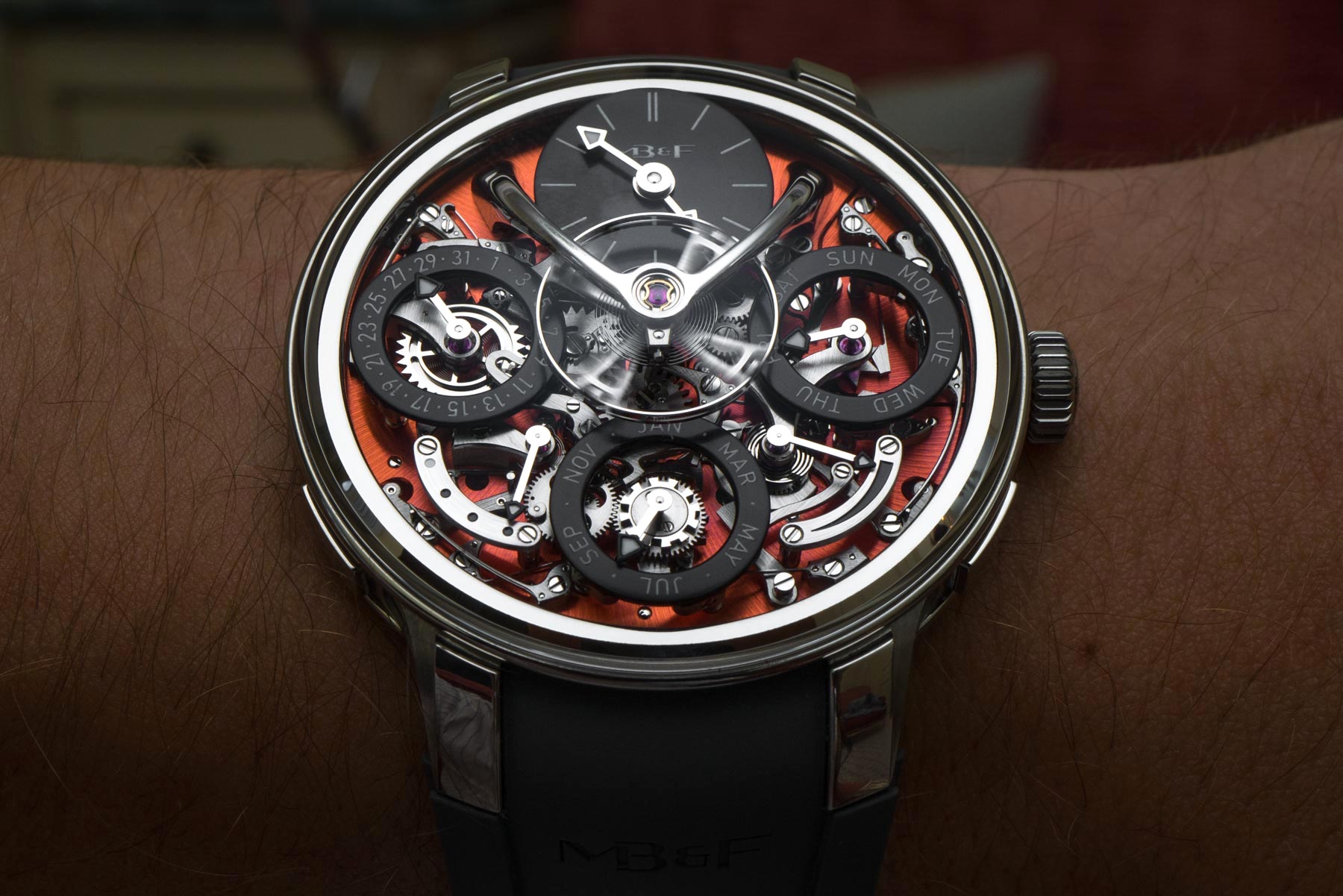 MB&F claims many of its customers were feeling the same way; but, you see, there was a problem. The original LM Perpetual was never designed to be worn during such trying activities as head-diving, riding bicycles and motorbikes over rough terrain, or running. Not that movement, not that case, and not that strap. So MB&F figured they’d have a crack at turning its delicate perpetual into an all-rounder watch and have done so by introducing a host of updates to it. They began by increasing water resistance to a rated 80 meters (that’s the Swiss watch industry’s way of saying the case and its gaskets are robust enough to provide peace of mind for the occasional jump from the back of your boat and not that you can actually go anywhere near 80 meters deep with it). 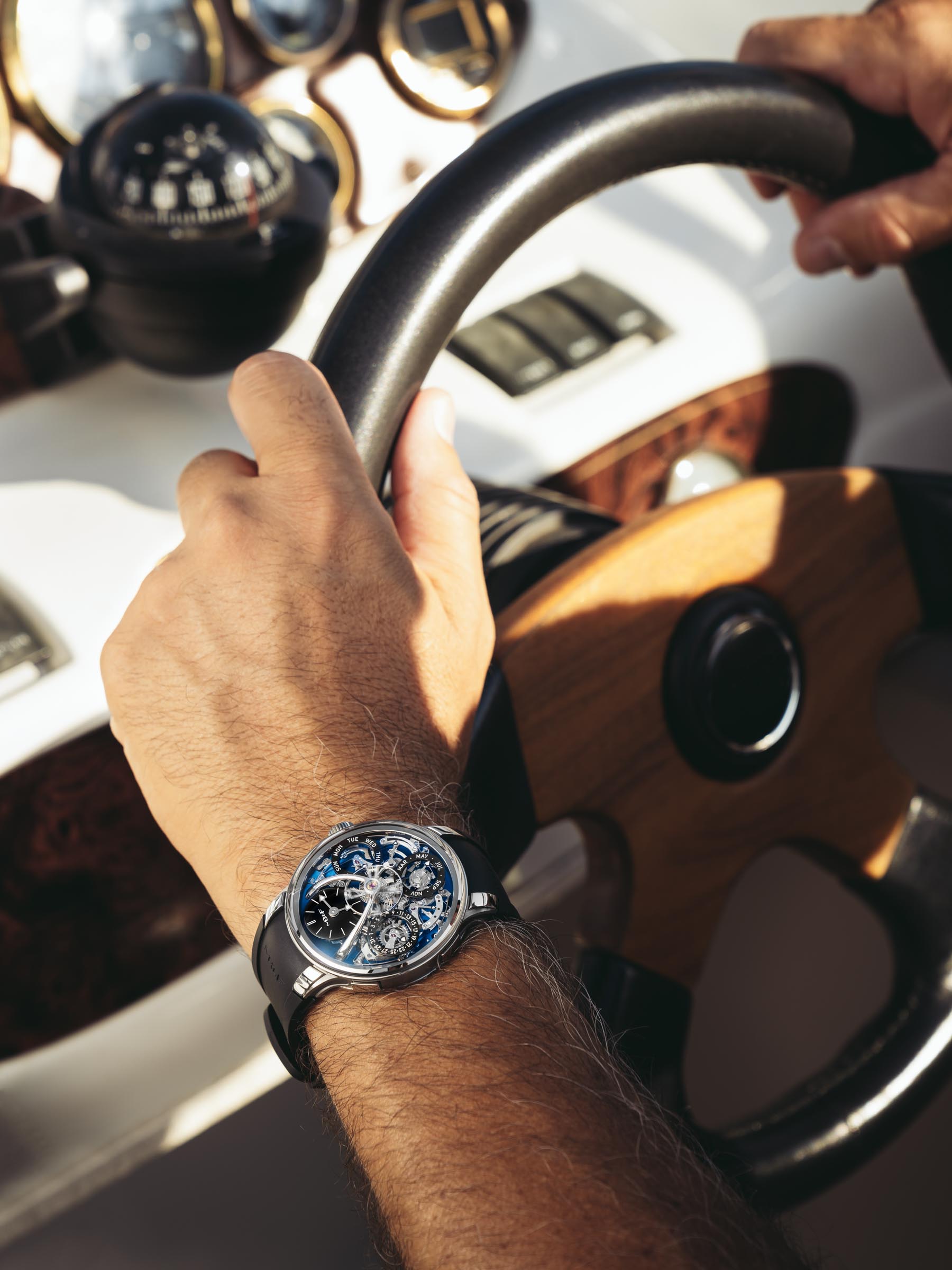 Likewise, the four small, round adjuster pushers on the original have been replaced by wider, double-sprung, oblong actuators that offer a better seal and are easier to press. The bezel and sapphire crystal have also been re-engineered: The crystal now sports a new geometry for greater structural rigidity and is now “fused” (actually thermal-bonded) to the case in a bezel-free design. The crown is now screwed down for added security and water-tightness and is equipped with a system that disconnects the winding stem when screwing the crown back down. This comes handy when the mainspring has been fully wound and the crown can no longer be turned — but you do need to screw it back down to secure it. 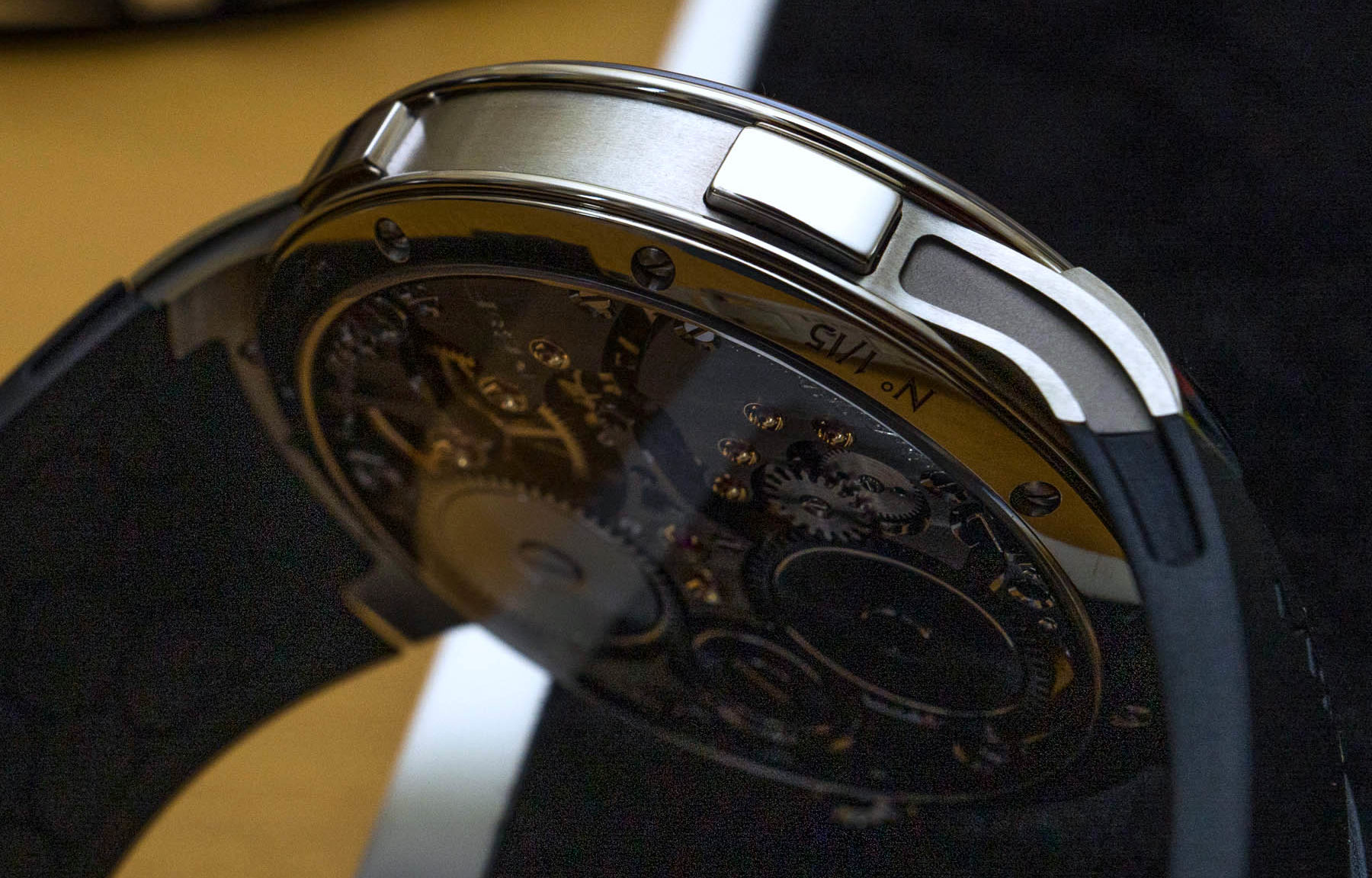 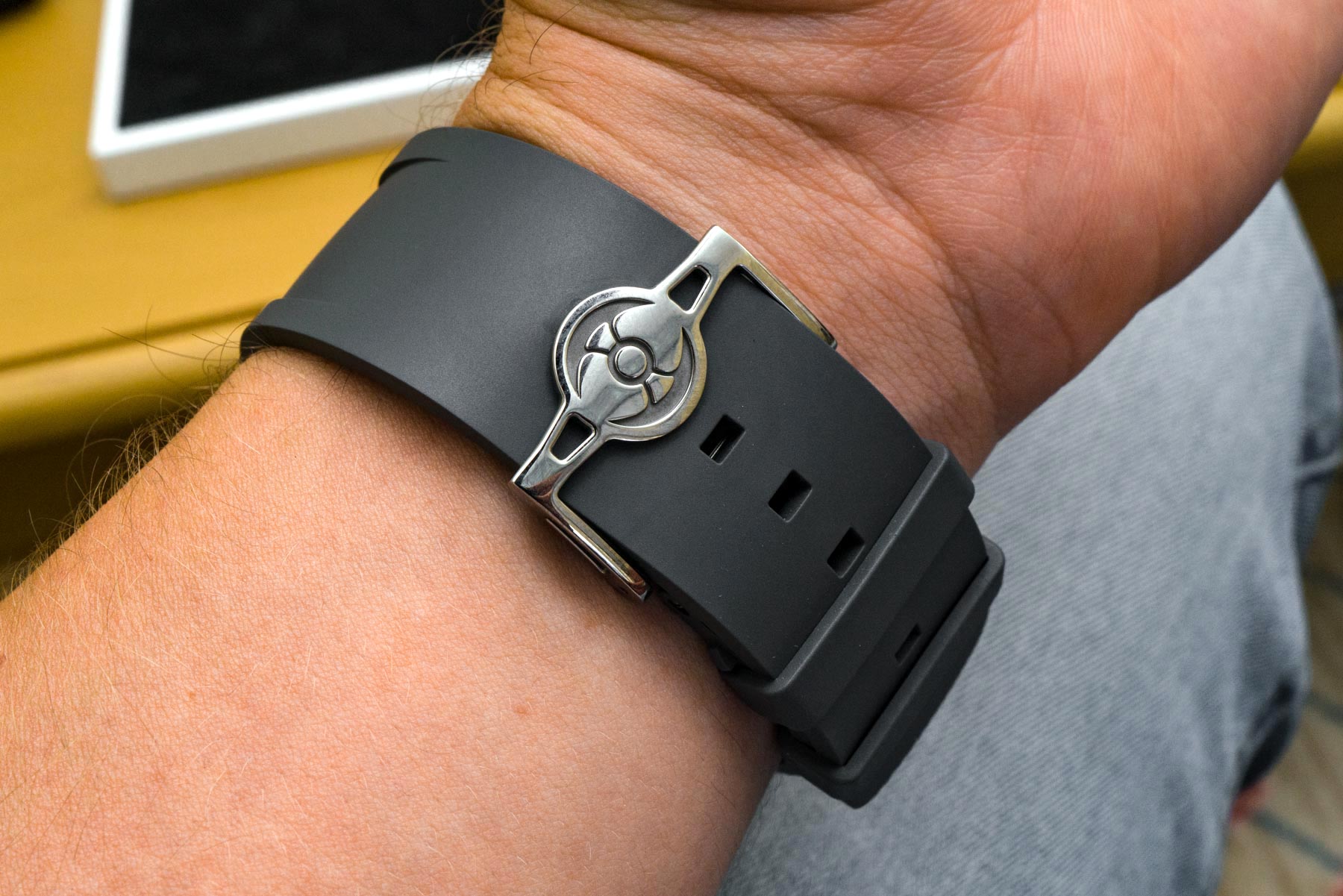 The greater water resistance rating and the customers’ request for wear in water necessitated the development of a rubber strap and its perfect integration with the case design. As such, the strap follows the curvature of the case in between the lugs and widens by the end of the lugs to provide a slim but wide strap with optimal security and reduced wobble of the watch head. I am not sure if this made sense aesthetically, but I do wonder if the strap had looked better with some openings (Richard Mille-style) for better ventilation and to complement the complex look of the dial and case. The folding clasp is in neatly finished titanium with the MB&F logo. 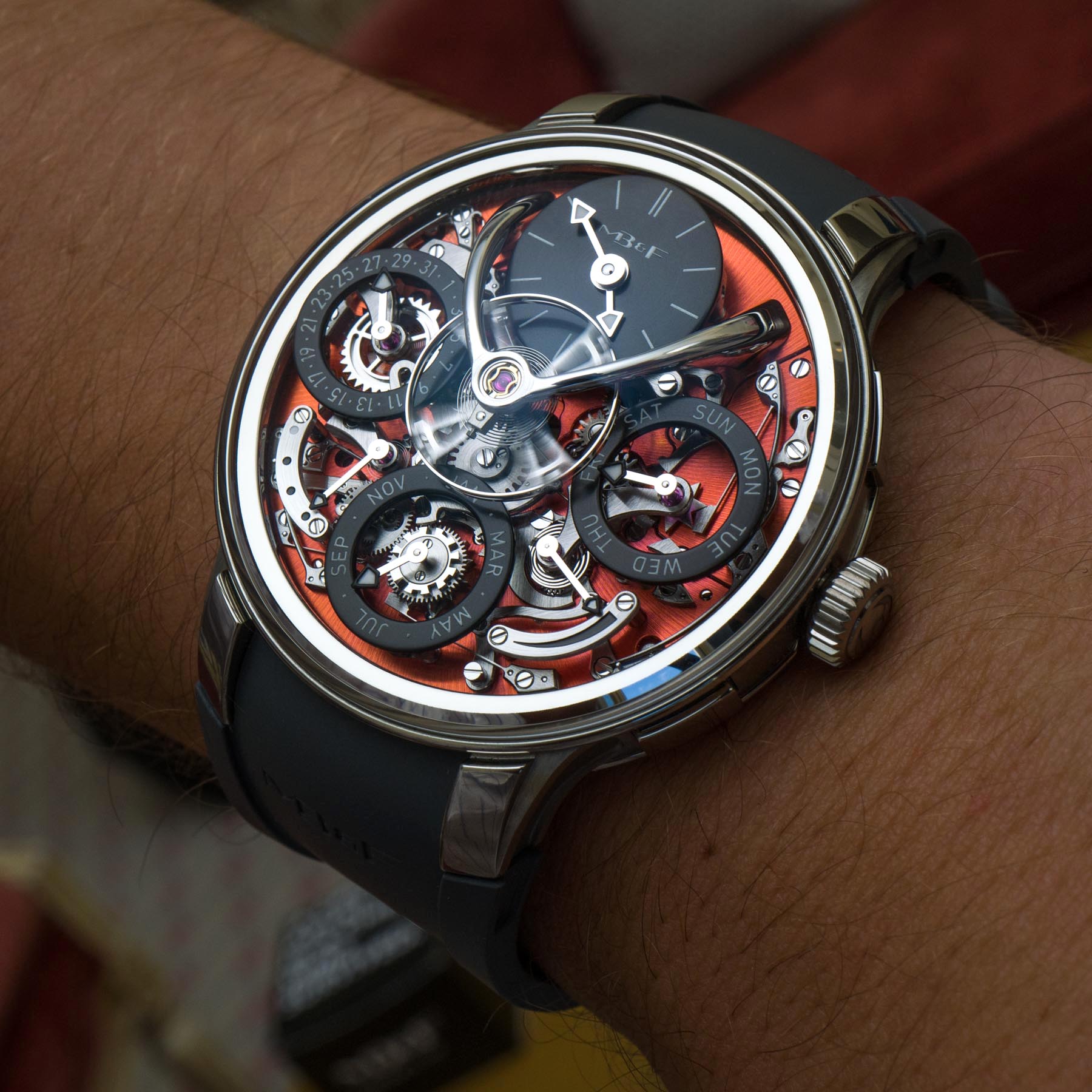 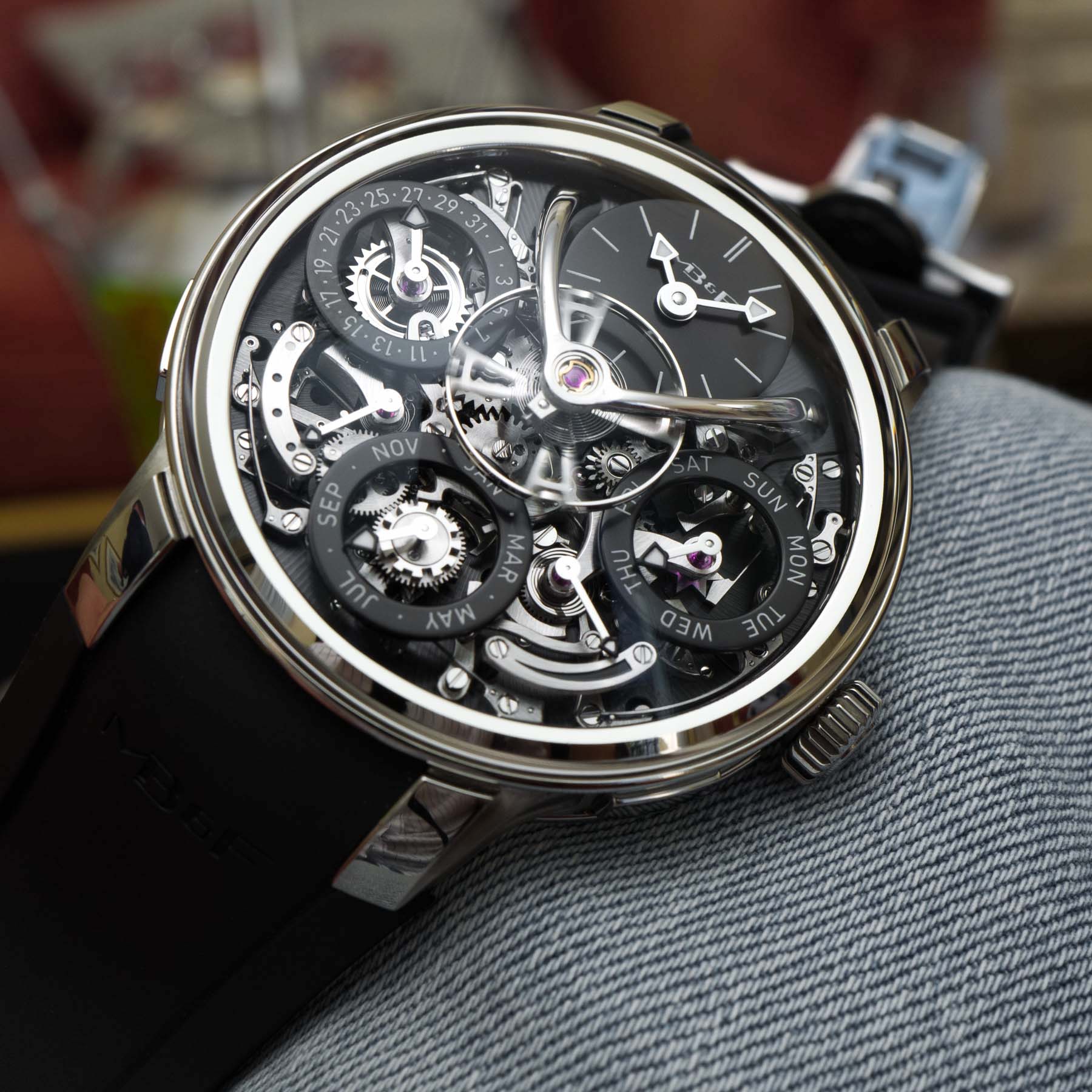 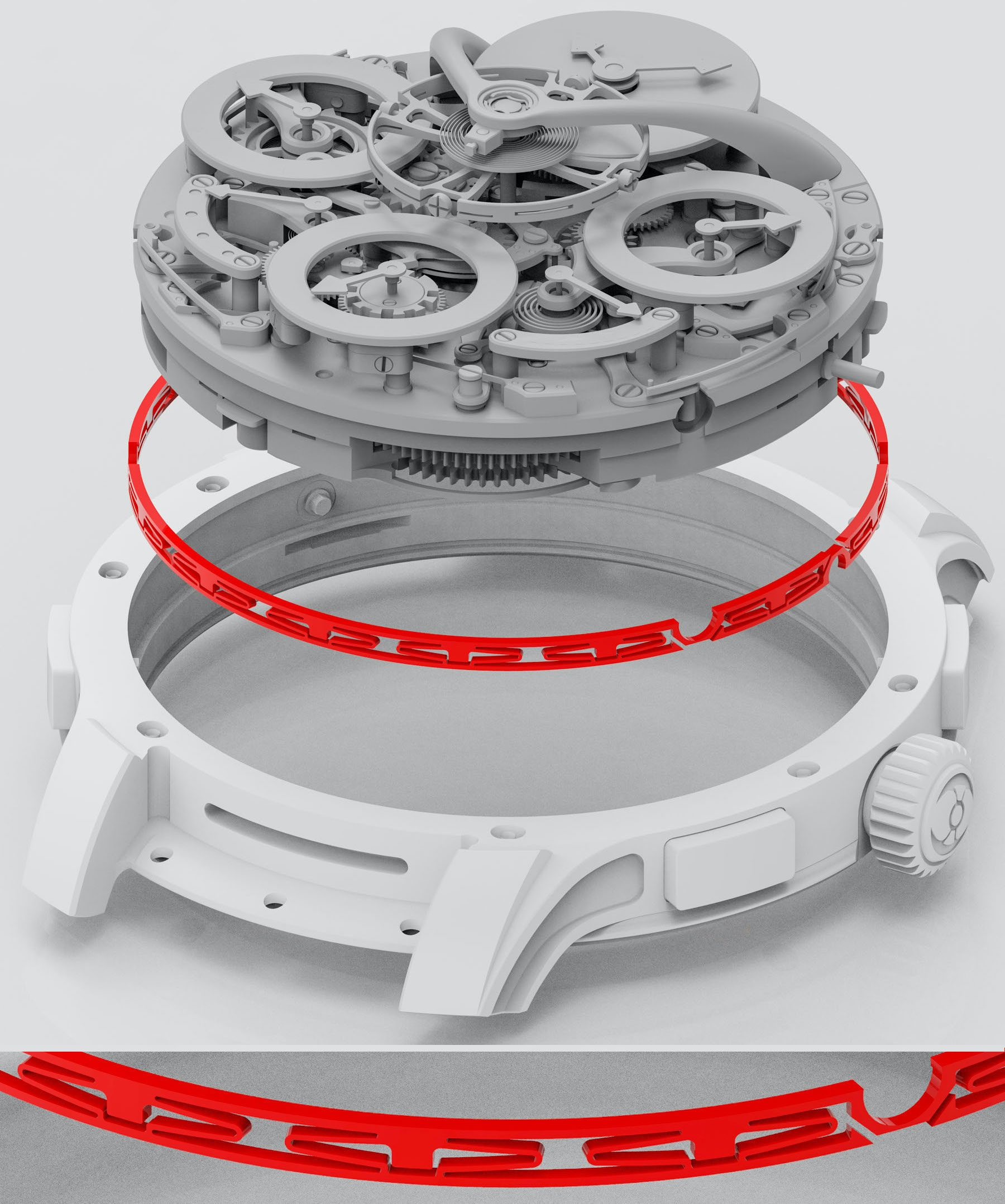 Last comes the most surprising detail of the MB&F Legacy Machine Perpetual Evo: the aptly called “FlexRing.” This monoblock shock-absorbing system, MB&F explains, “is an annular dampener fitted between case and movement, providing shock protection along the vertical and lateral axes. Machined from a single block of stainless steel, the dampener imparts exceptional robustness.” The idea reminds me of the “Alpha GEL” dampener system that plays a key role in making G-Shock watches so famously robust and durable. More to the point, MB&F is to be applauded for going the extra mile in thoroughly engineering this piece for activewear — as opposed to just fitting a rubber strap, increasing water resistance, and calling it a day. 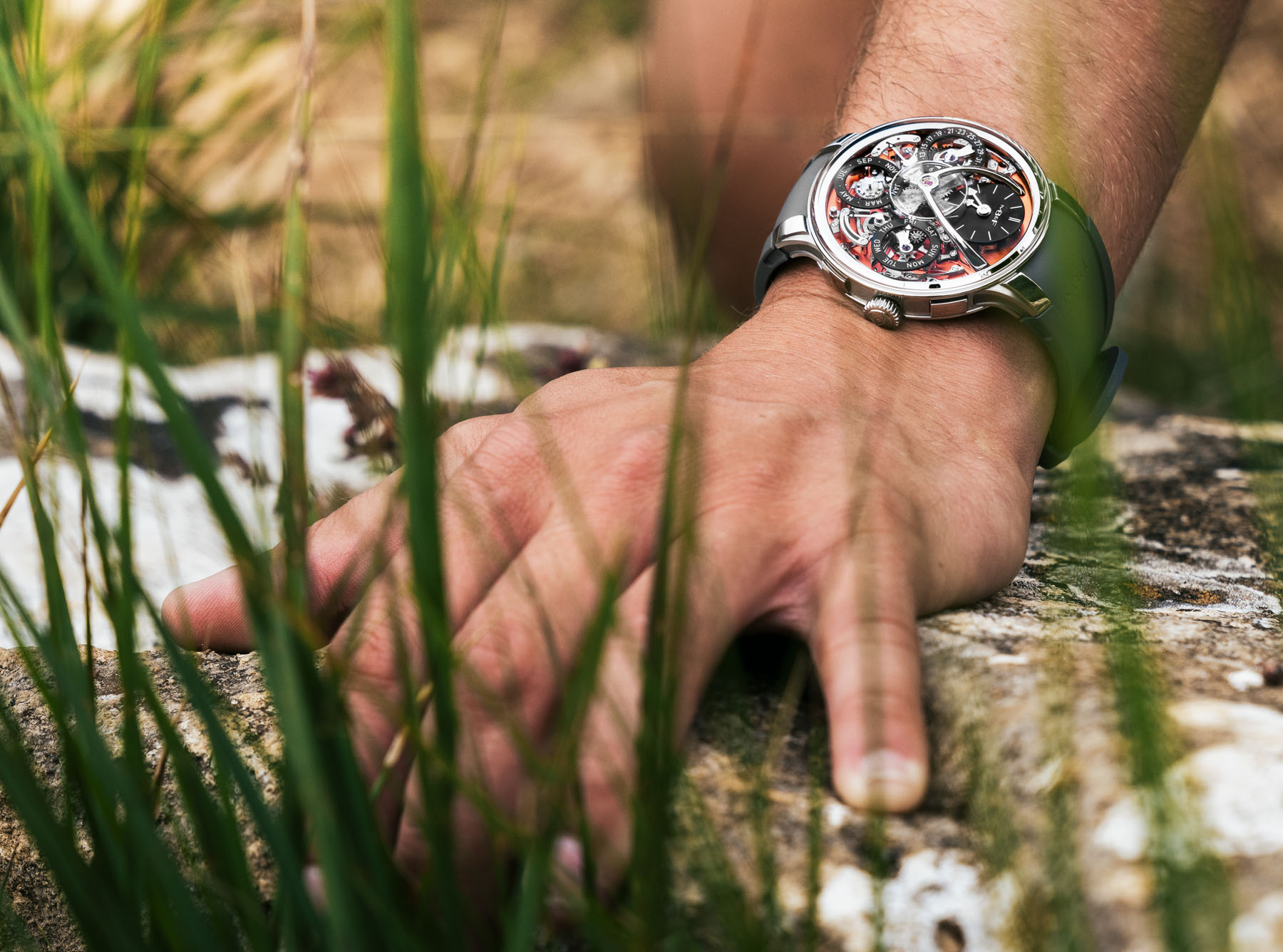 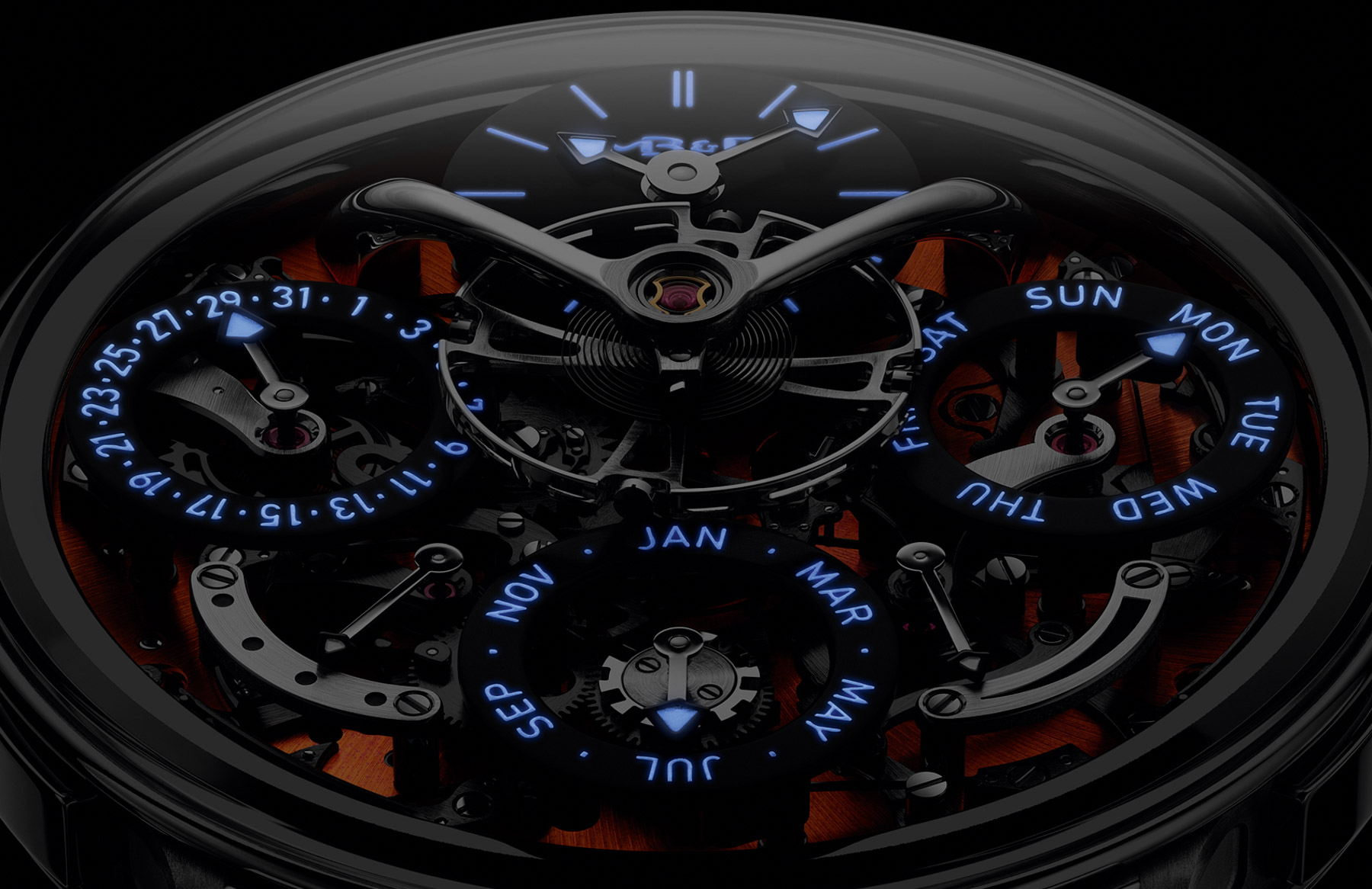 The MB&F Legacy Machine Perpetual Evo is available in three different variations — each limited to 15 iterations and each cased in zirconium. The variations have dials in orange CVD, blue CVD, or black PVD — with the fiery orange version being my personal favorite for its flamboyant, rich color that so perfectly underlines the sporty nature of this latest Legacy Machine. Revealed are many of the Stephen McDonnell-developed movement’s components — a grand total of 581 parts and 41 jewels make this baby run with a power reserve of 70 hours, replenished exclusively through the crown. 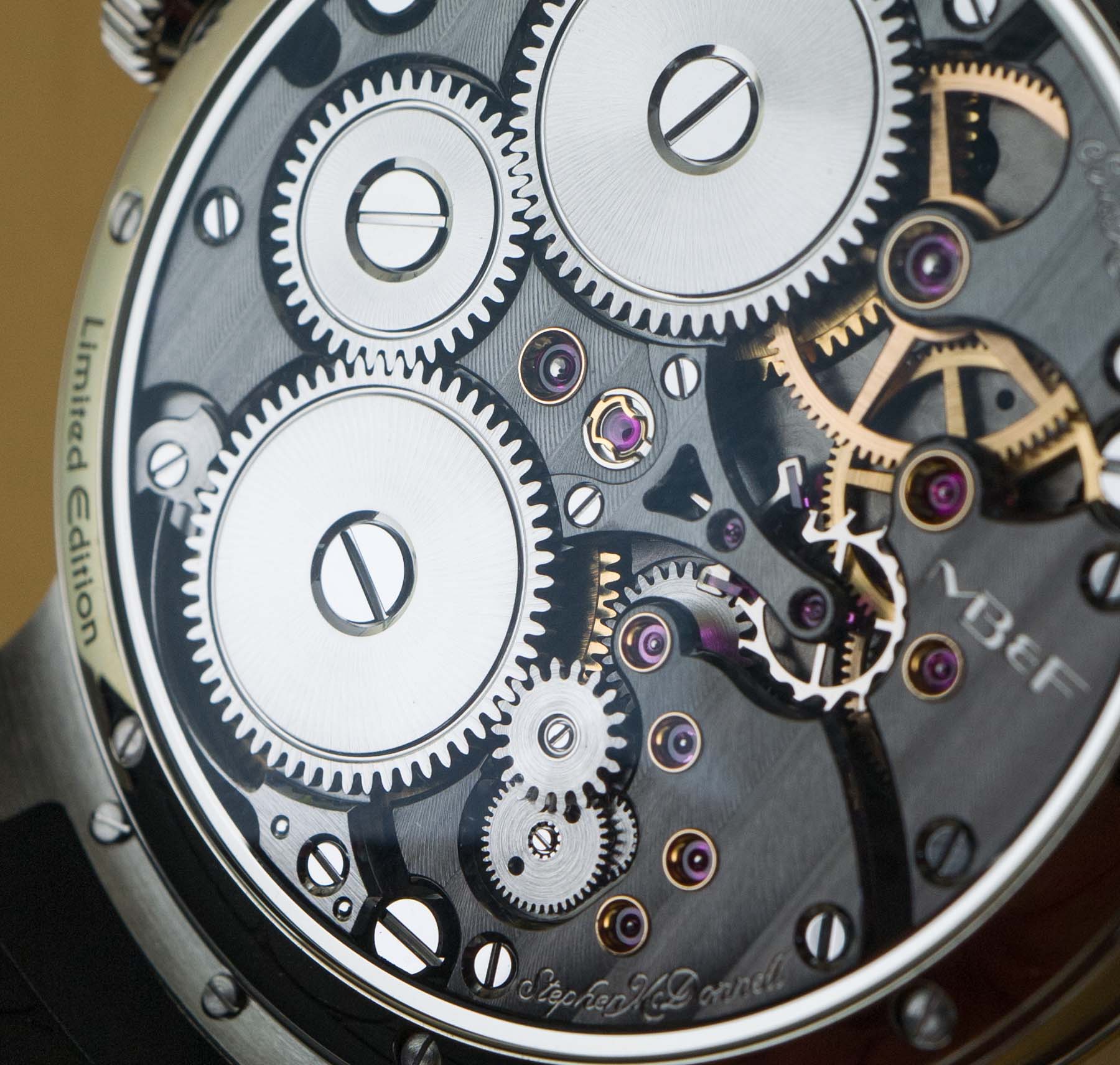 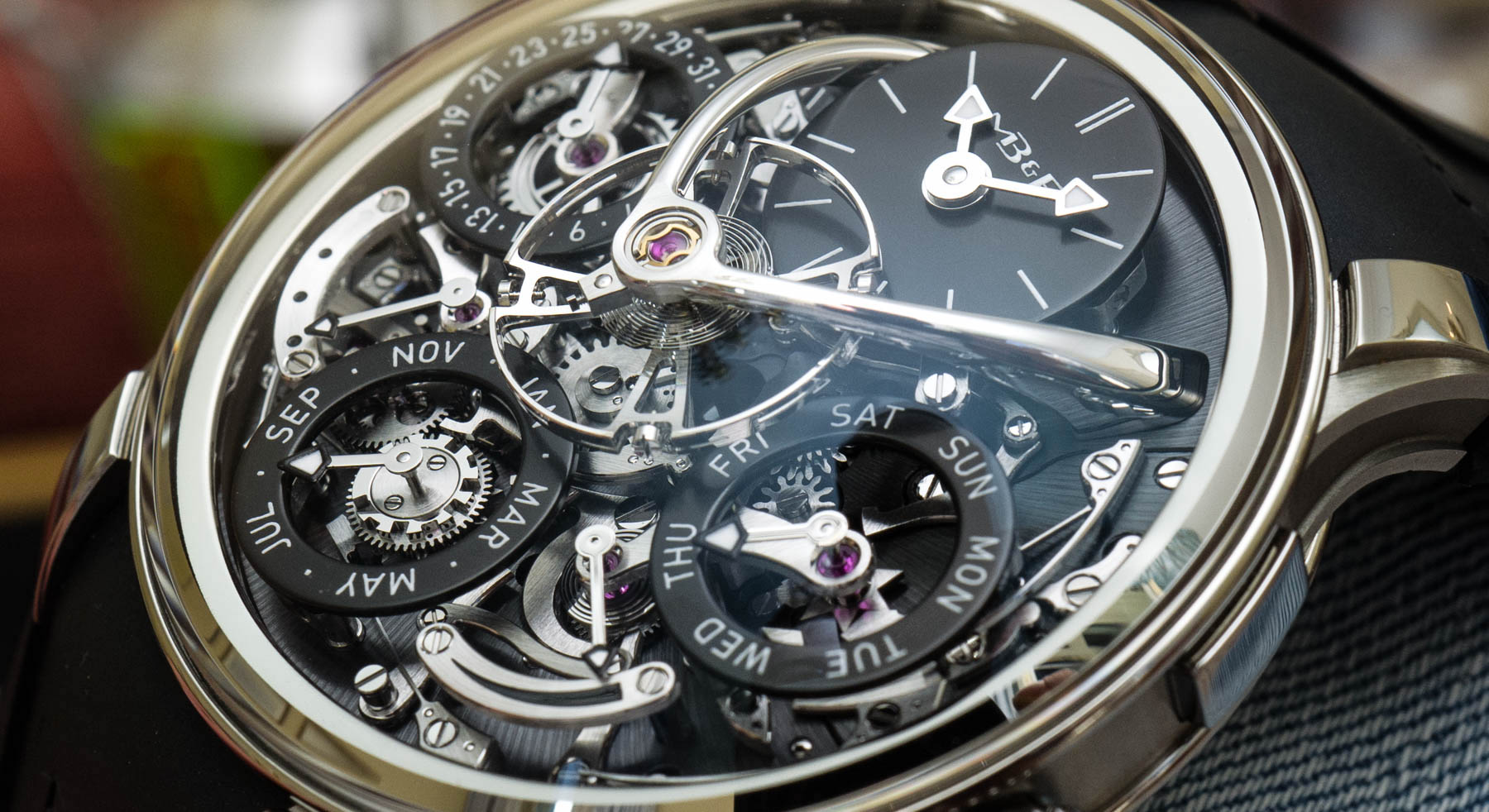 Hand-finishing “respecting 19th-century style” is abundant front to back, including the giant wishbone bridge that suspends the absolutely massive, 14mm-wide balance wheel and its traditional regulating screws for variable moment of inertia. It is the exceptional finishing of movement and case (because the case finishing on MB&F watches often doesn’t get the credit it deserves with the movement usually stealing the show) that makes this piece such a head-scratcher: It is watchmaking par excellence, that you can have on you and take into the most unlikely use scenarios. To think of all these meticulously hand-finished and hand-assembled movement and case components desperately trying to impress to wearer while he or she is on a rampage through the undergrowth is both silly and magnificent at the same time. 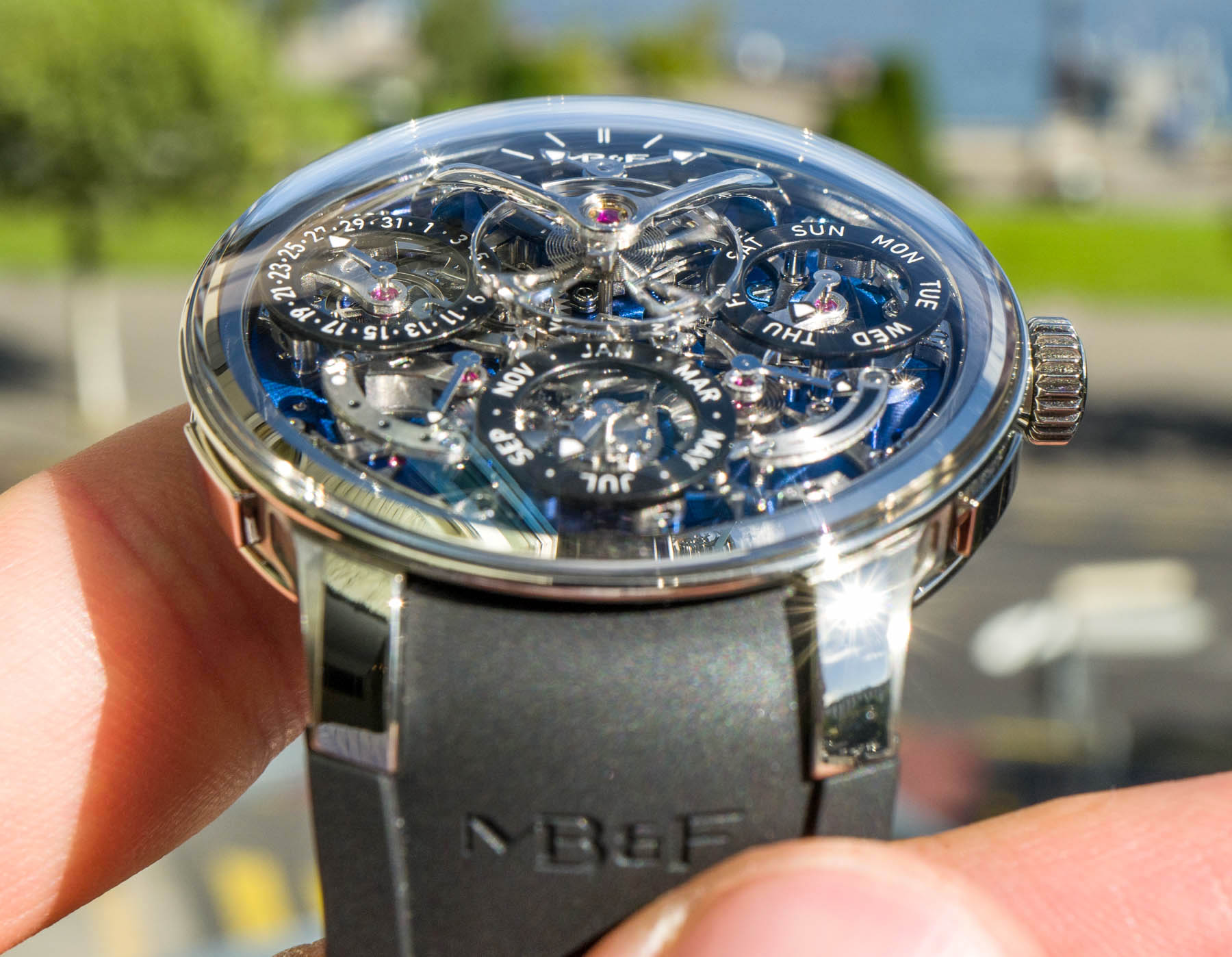 Price for the each of the three-times-fifteen MB&F Legacy Machine Perpetual Evo limited-edition watches is $167,000. Mighty expensive, but hey, if you wear it non-stop for the next 30 years of your life, that’s just $5,566 a year! In all humbleness, this has got to be the best financial advice ever.