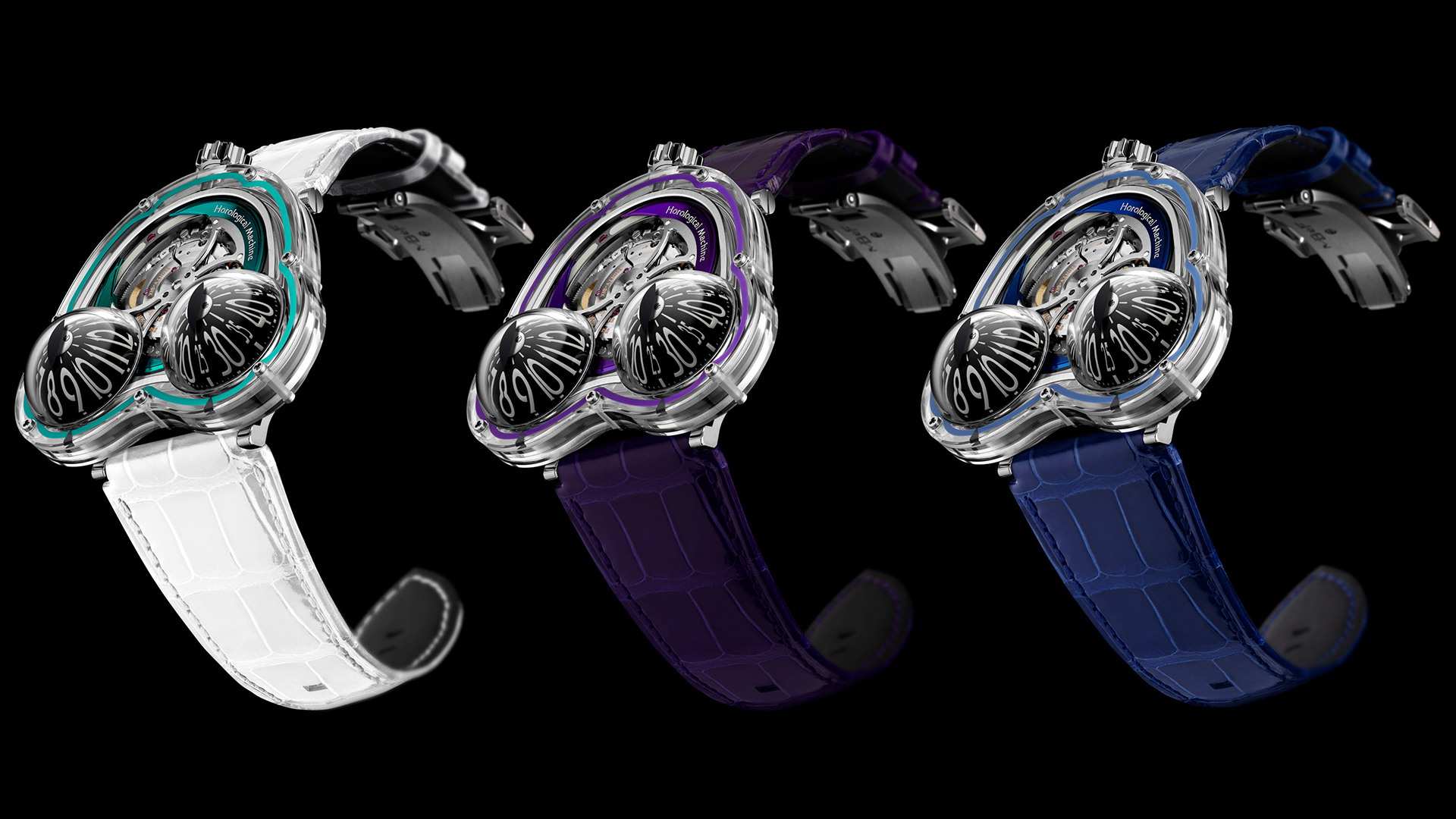 The exclusive and ultra-expensive world of haute horlogerie has long been a space for unusual and expressionistic designs, but few brands in this space play with form with more playfulness and character than MB&F. While the boutique brand got its official start a few years prior, the release of the wild, pareidolic HM3 Frog in 2010 would set the tone for the marque’s unique expressionistic style. 2020 marks the 10th anniversary of the original Frog, and to celebrate, MB&F has created a limited-edition revival of the series in eye-catching full sapphire, exposing the complex inner workings of the HM3 movement in detail while including some colorful new touches to the design. The limited-edition MB&F HM3 FrogX is a technically masterful reinterpretation of one of the brand’s signature designs, maintaining the same fanciful form as the original while pushing the envelope further in terms of movement design and finishing. 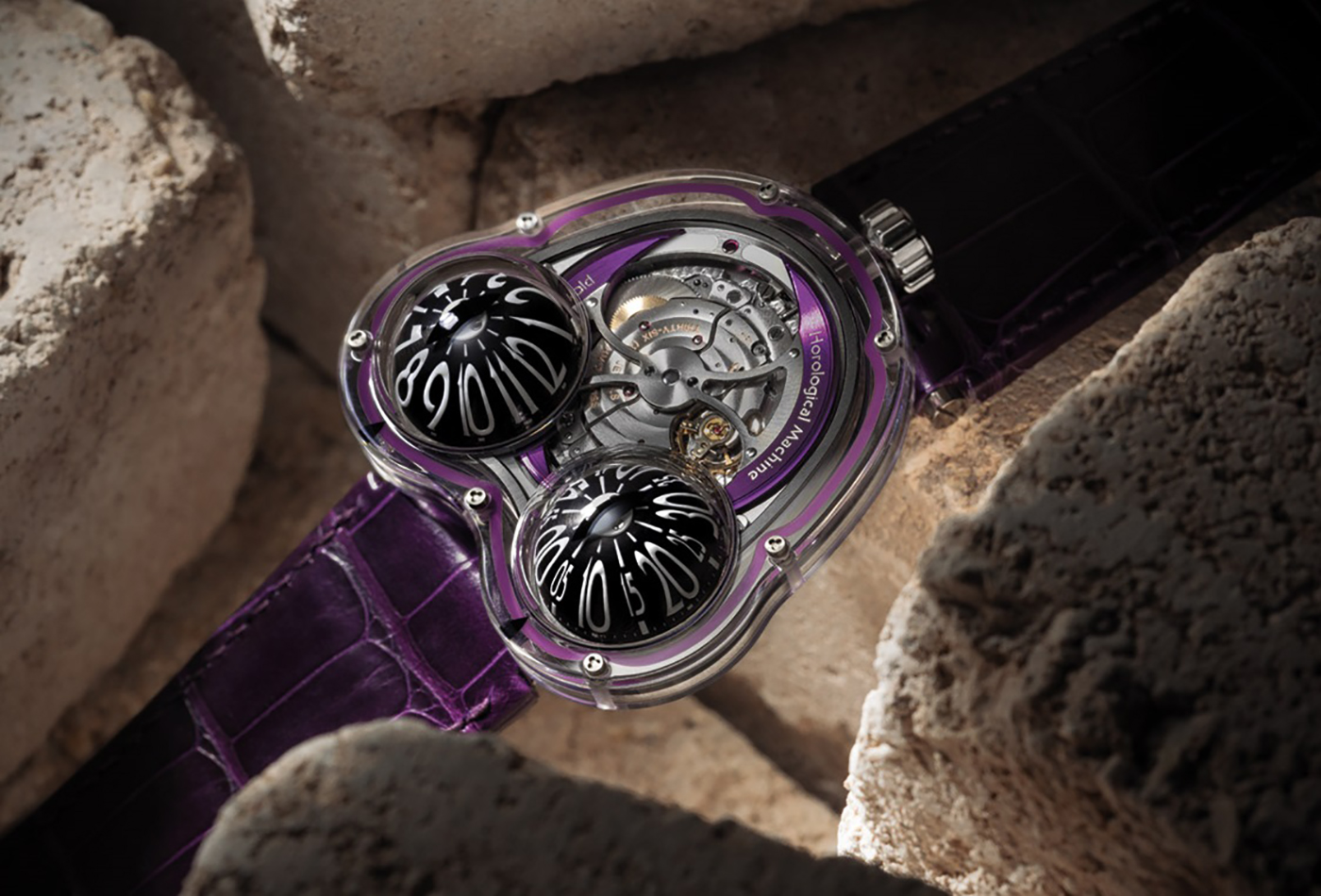 While the asymmetrical, double-domed case shape of the original HM3 Frog is carried over for the MB&F HM3 FrogX, the FrogX opts for a full sapphire crystal case to expose every facet of the unorthodox movement within. Due to the complex double domed form, each sapphire case takes weeks of labor-intensive work to ensure perfect distortion-free clarity. At 48.3mm by 52.7mm in size, this is likely to be far from a shrinking violet on the wrist, but a design like this intends to stand out, to begin with. The FrogX further sets itself apart from the original with two subtle aesthetic additions. The first is a colored gasket, vibrantly standing out inside the sapphire case material in either turquoise, navy blue, or a wild and exuberant purple. The second is a hidden detail MB&F refers to as the “Secret Message” crown. The 12 o’clock crown lacks a traditional signature but uses a unique micro-forming and surfacing process from Swiss industrial brand Rayform to create a unique reflective surface. When held near an even surface such as a wall or table, this “Secret Message” crown reflects ambient light to project the MB&F battle axe emblem onto that surface. While utterly impractical in practice, it’s difficult to imagine a more compelling conversation starter. 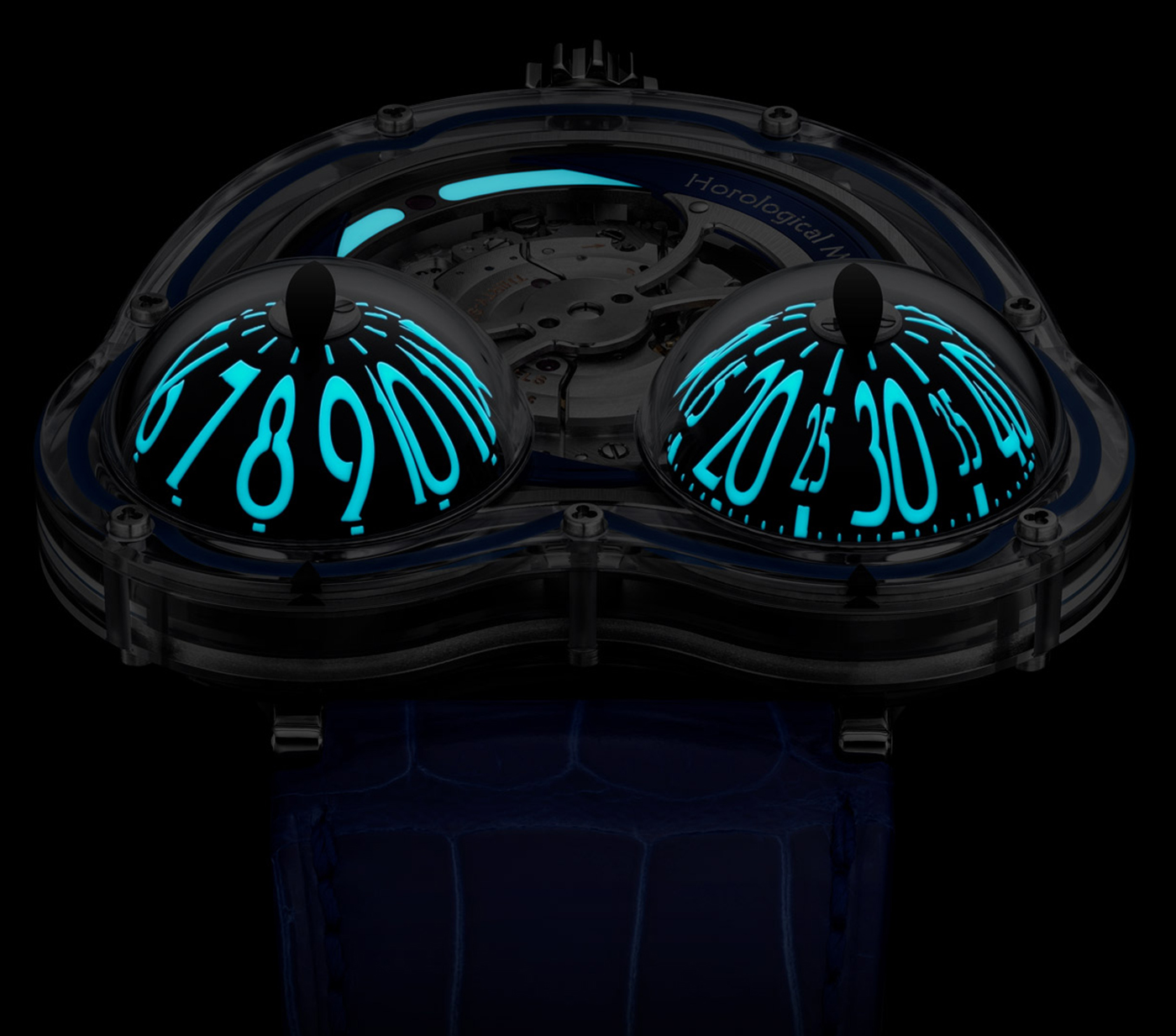 Speaking about the dial of the MB&F HM3 FrogX can be somewhat misleading, as the fully skeletonized design features no traditional dial at all, but the actual timekeeping display of the watch comes into view on the 6 o’clock side of the case. From this angle, the “Frog” moniker becomes clear. Like the 2010 original, the FrogX displays hours and minutes via two rotating domes in black anodized aluminum, marked by tapering black pointers. Viewed from that 6 o’clock angle, these twin domes take on the look of a bulbous pair of frog’s eyes, complete with tapering slit pupils as the pointers. The display is nearly as novel and playful today as it was on its debut in 2010, and further adds to the playful feel with its rounded, tapering Arabic numerals. 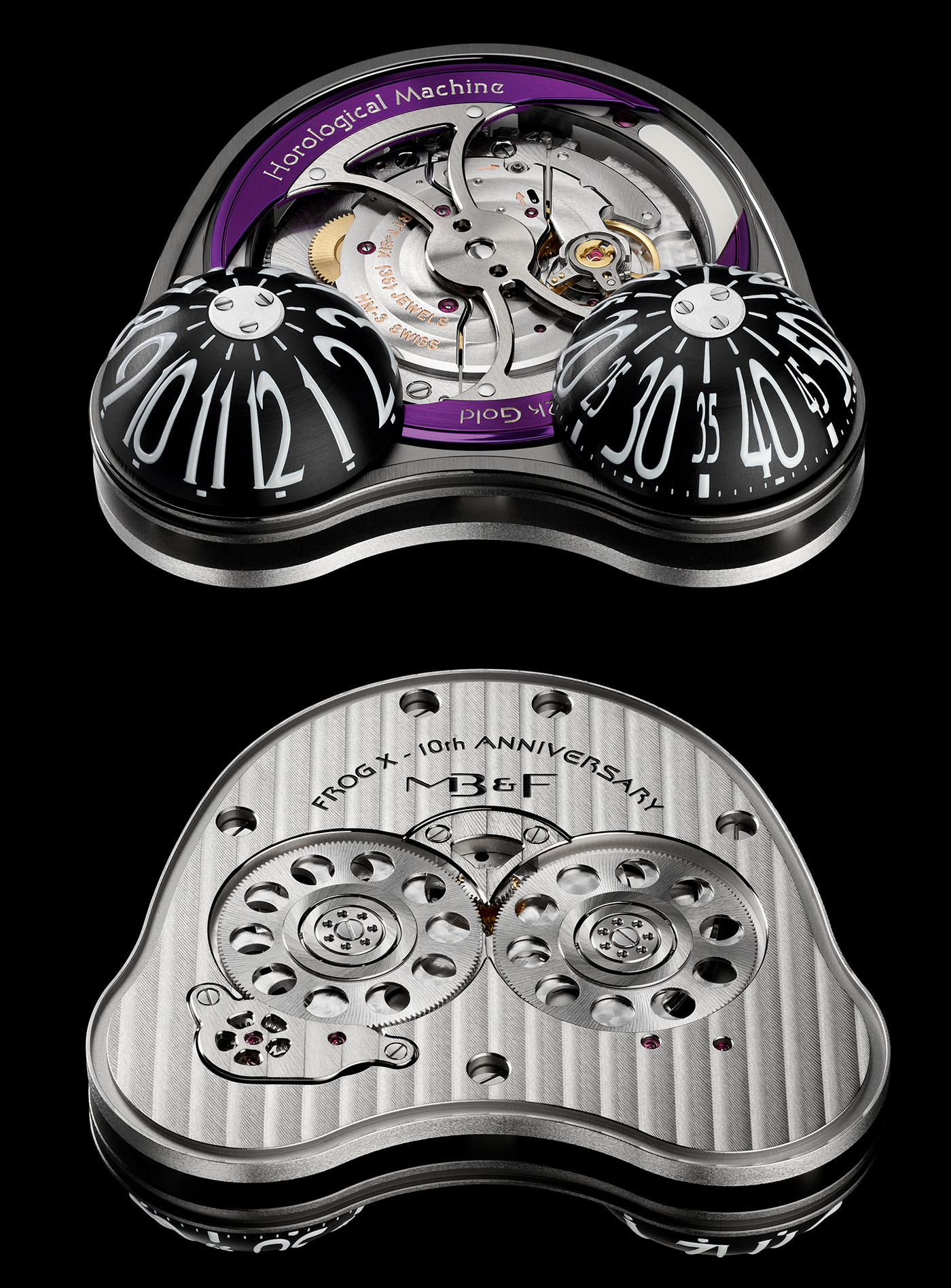 Viewed from the top of the case down, however, the full complexity of the Girard-Perregaux based HM3 automatic movement inside the MB&F HM3 FrogX is revealed. The view is dominated by the wide, axe-head-shaped winding rotor, which adds another splash of turquoise, navy blue, or purple CVD coating along its edges. The rest of the movement finishing is remarkably traditional by comparison, with wide circular Côtes de Genève along the bridges, and perlage finishing on the baseplate. The view from through the caseback is restricted almost entirely to a pair of symmetrical eye style gears thanks to nearly complete bridges covered in vertical Côtes de Genève. Technical details about the performance of the HM3 movement are scant, beyond a 28,800 bph beat rate. 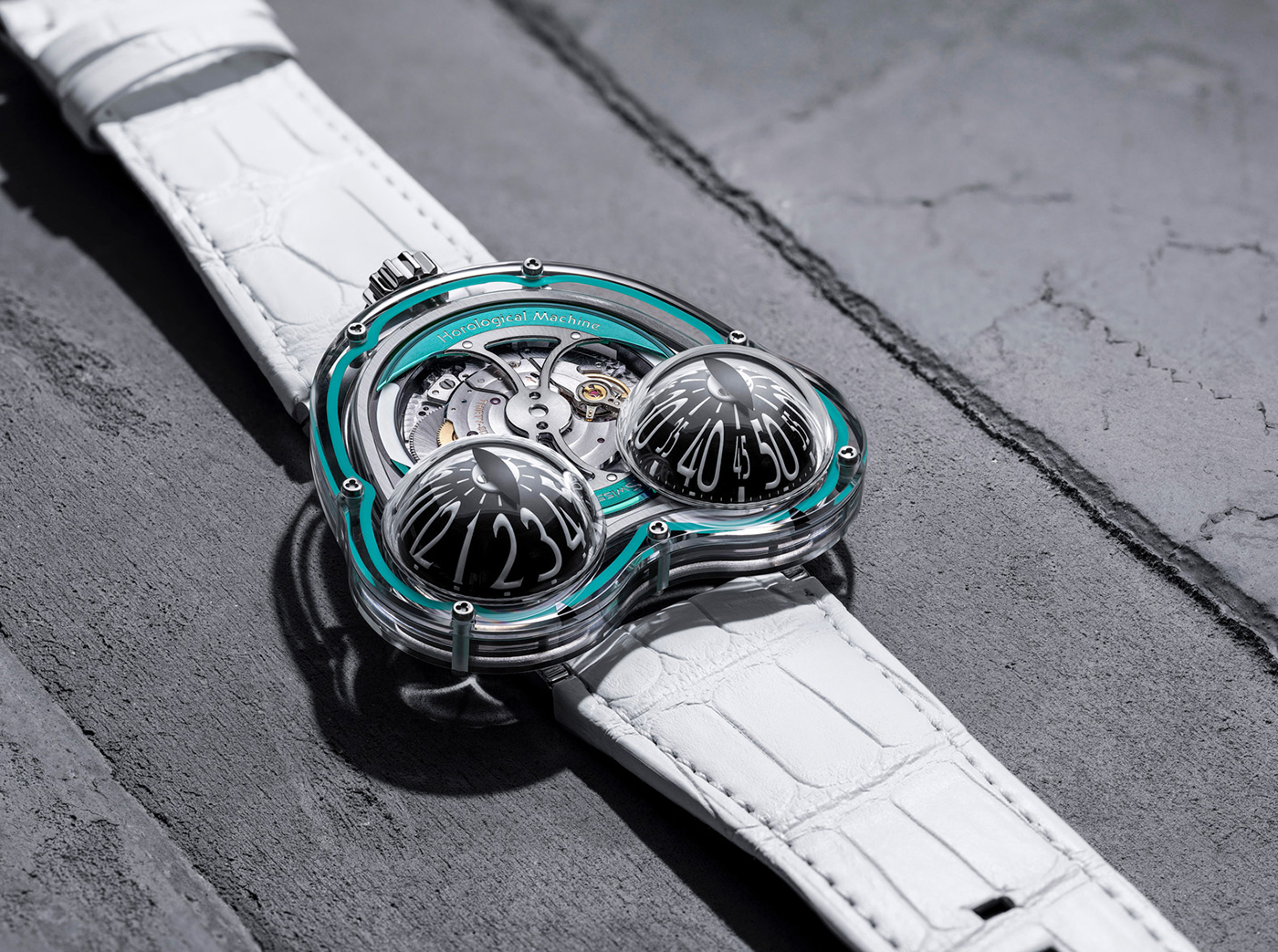 MB&F pairs each colorway of the limited-edition HM3 FrogX with a hand-stitched alligator leather strap. While the navy blue and purple variants receive matching straps, the turquoise detailed version is offered with sharply contrasting white leather. This combination in initial images looks to provide a bright visual impact, maximizing the “shock and awe” factor of an already attention-grabbing design. 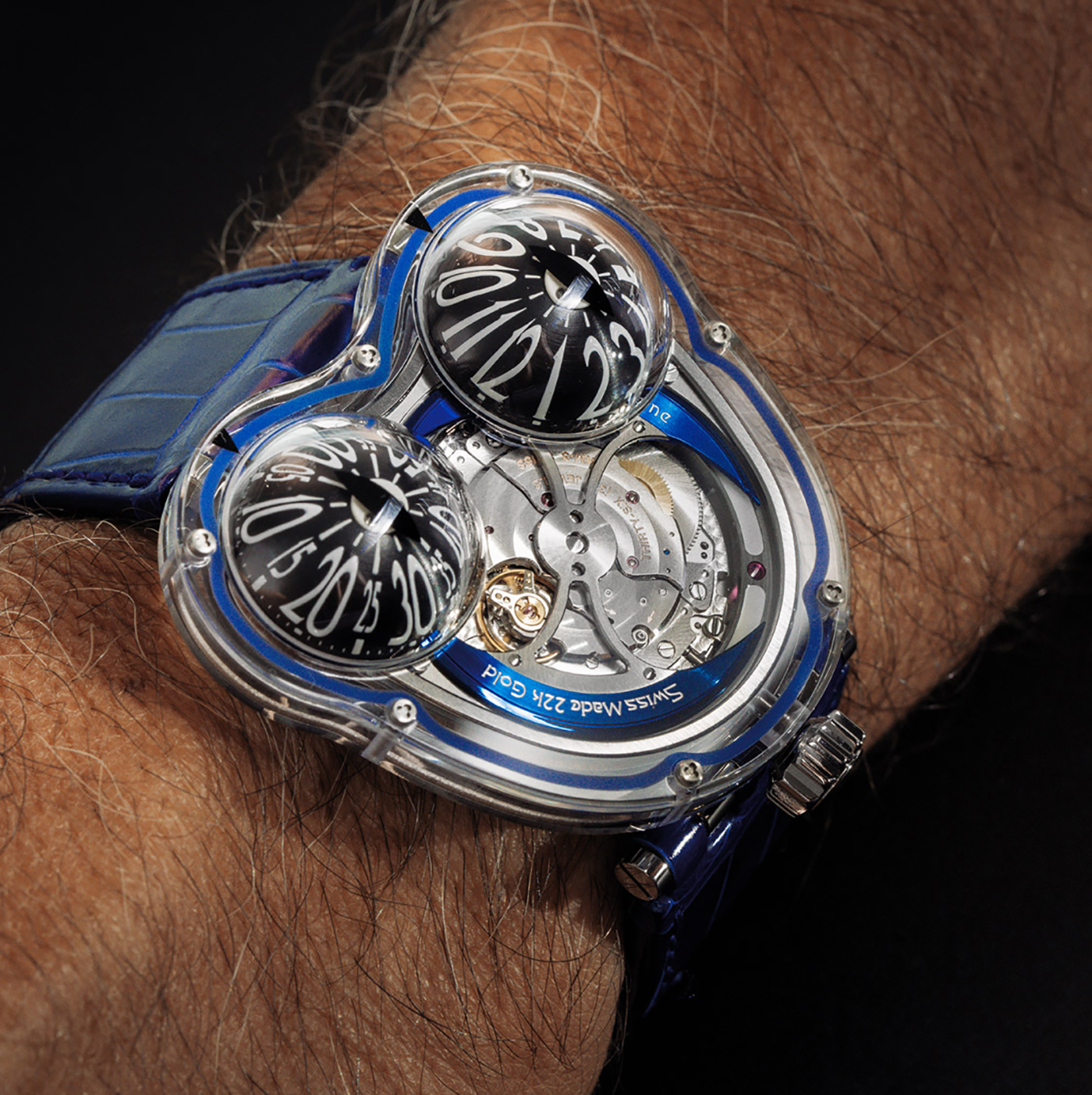 With the limited-edition HM3 FrogX, MB&F has dramatically returned to one of its most enduring collections with an added layer of visual panache. Only 30 examples of the MB&F HM3 FrogX will be made, with 10 models in each colorway. The MB&F HM3 FrogX is available now through authorized dealers with an MSRP of $152,000 USD. For more details, please visit the brand’s website.