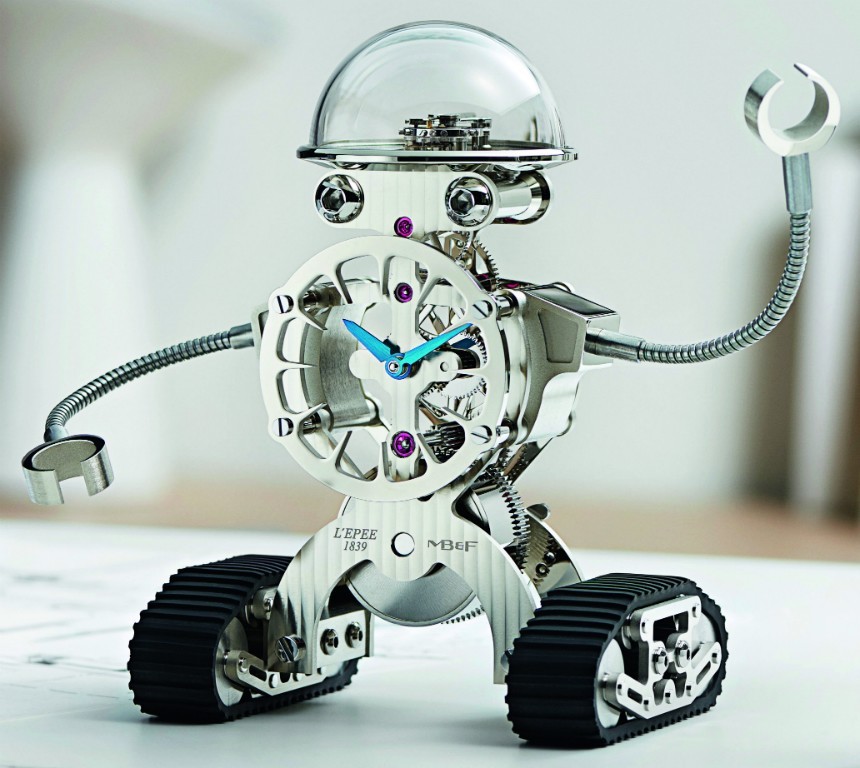 At SIHH 2016, Swiss MB&F will release their newest robot-inspired clock produced in collaboration with clock-maker L’Epée. Say “hi” to the friendly-themed MB&F Sherman, which is the thematic little brother of the 2015 MB&F Melchior (robot) clock (hands-on here). The MB&F Sherman is the friendly robot which in some pop culture is the less frequent underdog to the scary robot. After releasing such clocks as the MB&F Arachnophobia, it was probably a good idea for MB&F to focus on a clock display that didn’t frighten small children. 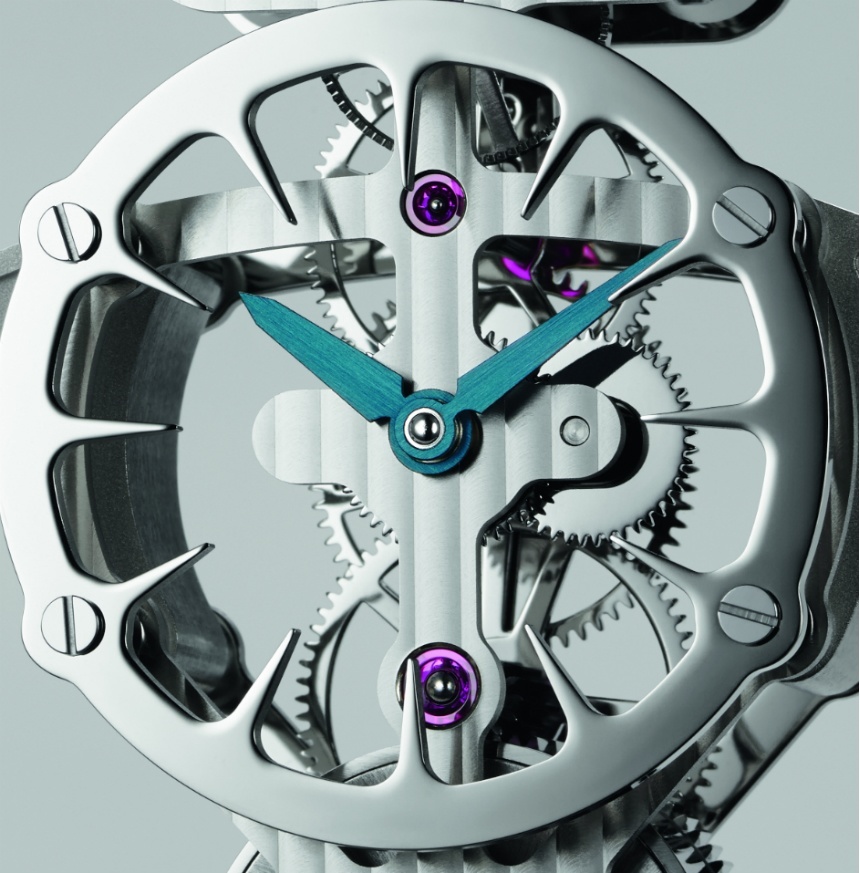 More happy news is that most versions of the MB&F Sherman are priced at less than half the cost of the MB&F Melchior. With that said, this limited edition series also has a diamond-set model which, of course, has added cost to it. 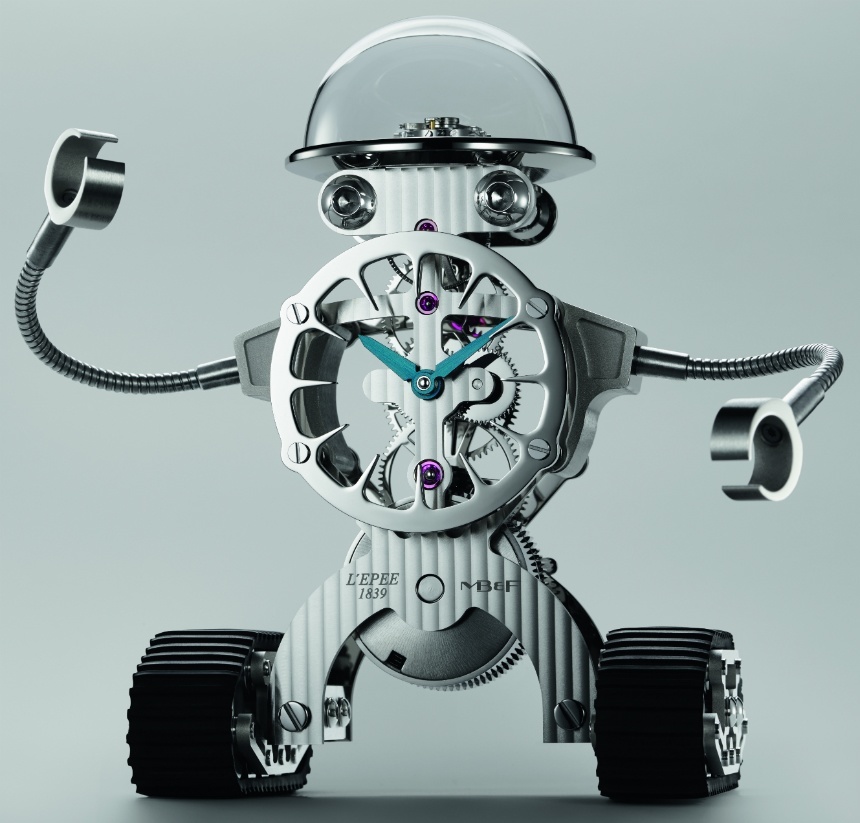 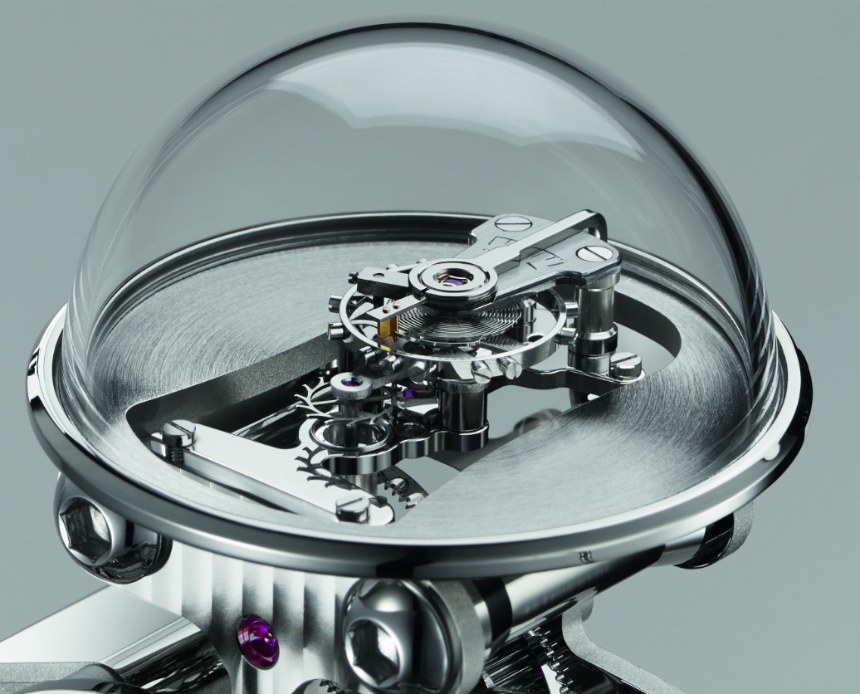 I think a lot of people will appreciate the simple, straightforward nature of Sherman. There are no exotic complications and time is displayed in a traditional two-hand clock-style dial in the region that makes up his chest. Two blued-steel hands along with a ring of cutout hour markers make reading the time relatively simple. Just like Melchior, the “brain” area over the head is topped with a mineral glass dome, underneath which, you can see the balance wheel and regulation system for this mechanical timekeeping desk clock device. 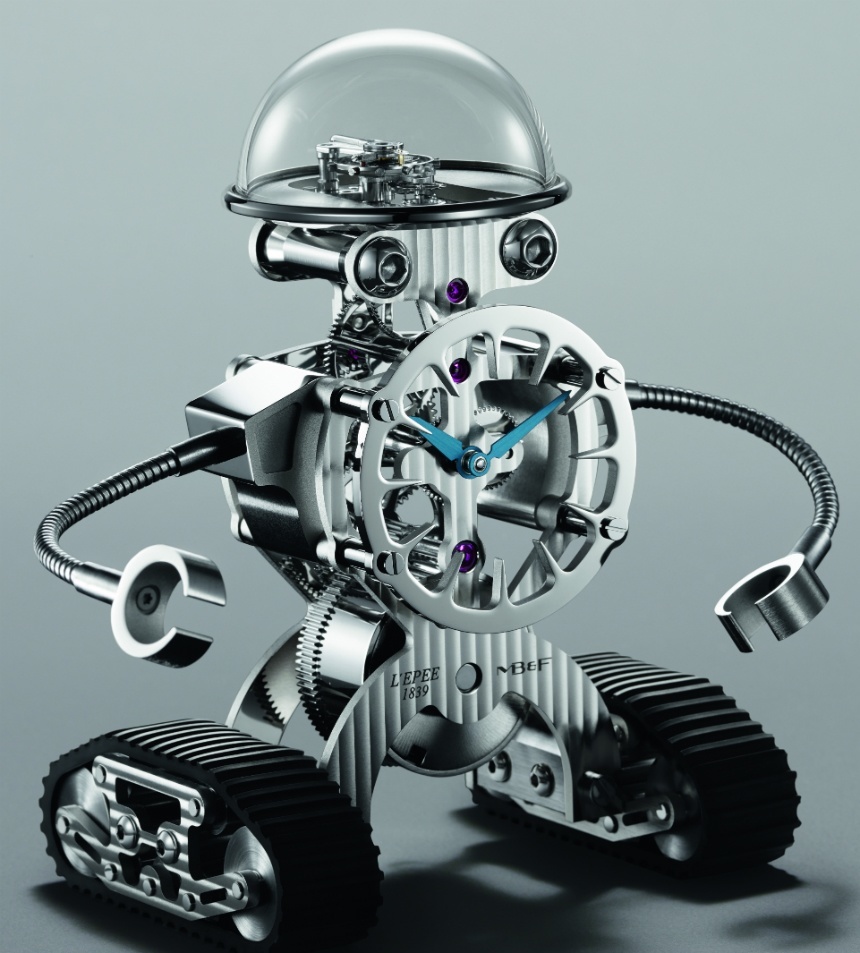 Designed by MB&F, Sherman’s body and movement are fully produced by Swiss L’Epée. The movement has a long power reserve of eight days and is produced from 148 parts. You can see the mainspring barrel above the tank treads, and the movement operates at a steady frequency of 2.5Hz (18,000 bph). The MB&F Sherman’s “eye sockets” (on the rear of the clock) double as where you insert the winding key to either wind the movement (one side) or adjust the time (the other side). 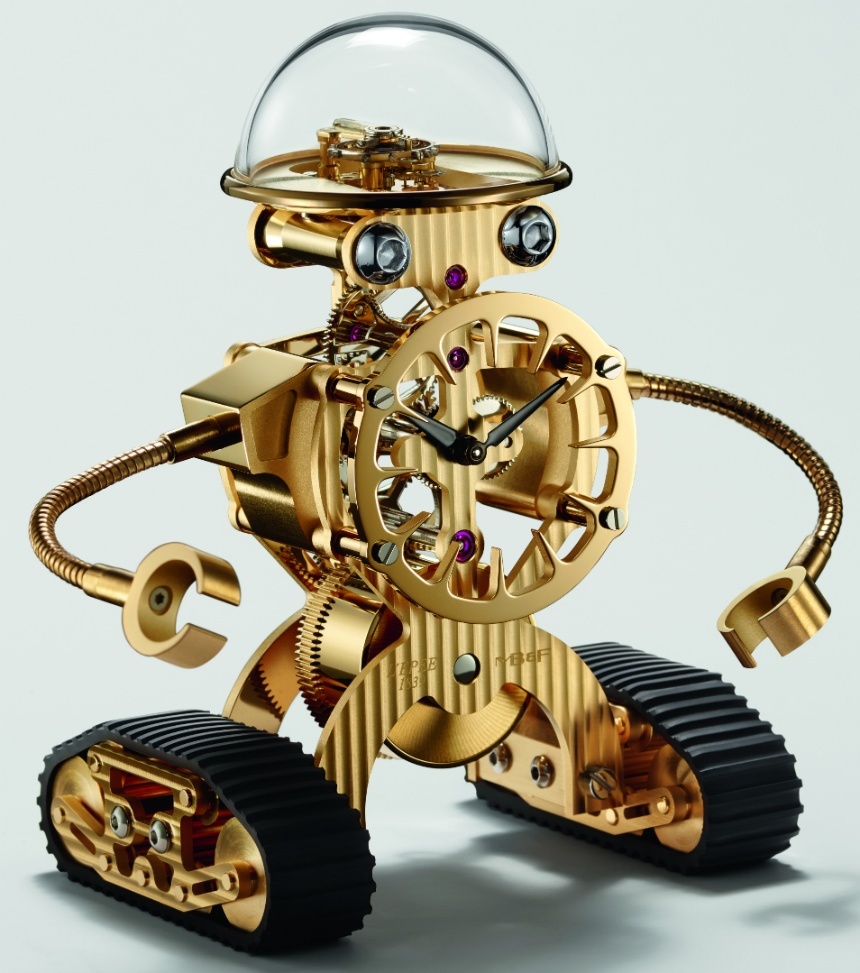 The MB&F Sherman is produced from brass but finished with various plating options. The silver-colored MB&F Sherman is plated in palladium and nickel (for some of the movement parts), and there is a gold-plated version as well. The diamond-set model has 735 diamonds around the head region. Sherman weights a not-too-heavy 0.9 kilograms and is 143mm tall by 109mm wide and 80mm deep. 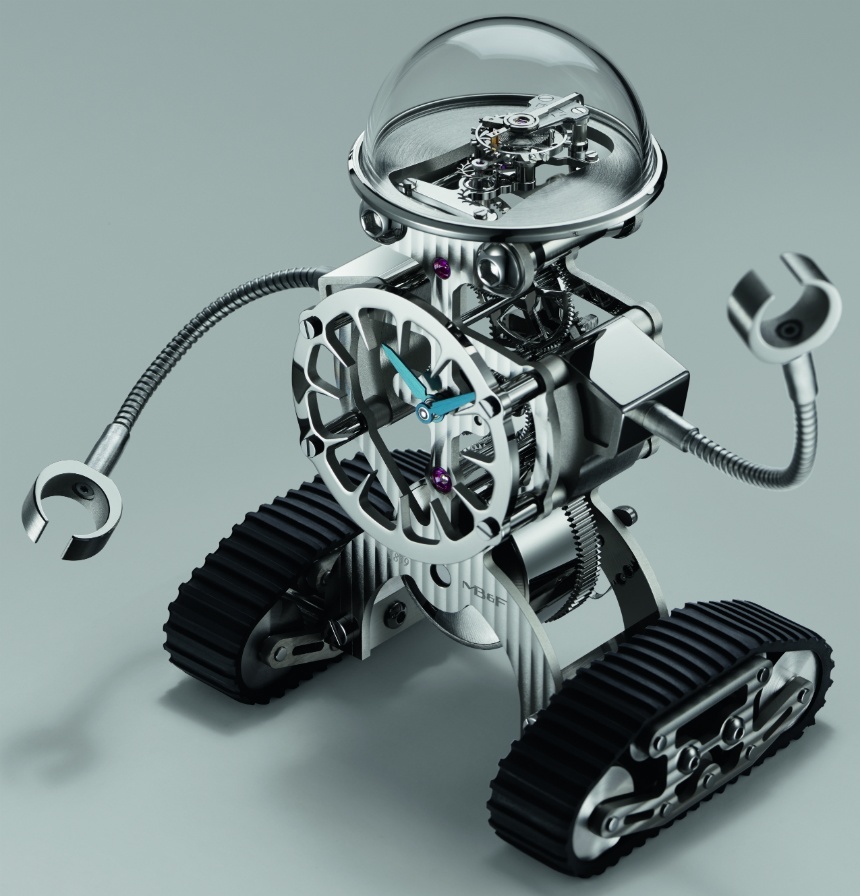 Other interesting aesthetic (and fun) features include the articulating metal tube arms and the working tank treads that function as the feet/base. While the direct visual design of MB&F Sherman doesn’t have a specific pop culture analog, there are a few sources of inspiration that MB&F designers pulled from when conceiving Mr. Sherman. 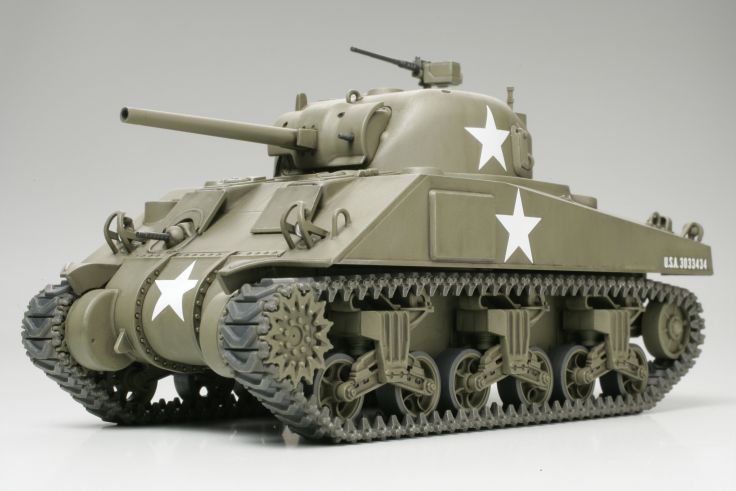 First is the World War II-era American M-4 Sherman tank. One of the most popular fighting machines on the allied side in WWII, this medium-sized American tank was out-classed and out-gunned by some larger German tanks (such as the Tiger), and American tank operators needed to win through numbers and tactics. Of course, the Sherman tank inspiration comes in with the tank-tread feet.

Another possible source of inspiration is a robot named Sherman from a relatively obscure and “hairtacular” science fiction movie called Millennium from 1989. In Millennium, the emotionally-scripted Sherman robot does this likable smile and tries to cheer up the lead actors quite a bit. If anyone in that movie deserves reincarnation in the form of a luxury Swiss clock, it is Sherman the robot. I am going to include the entire movie via a YouTube embed in this post for those who are curious what that movie was all about. 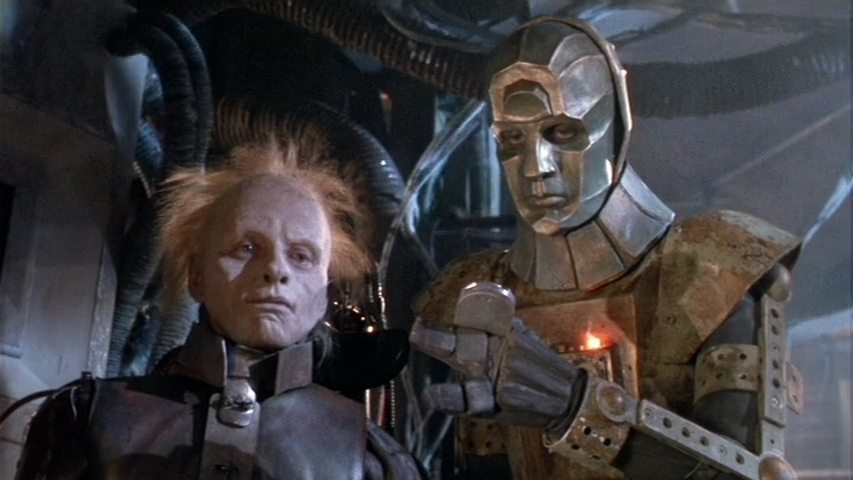 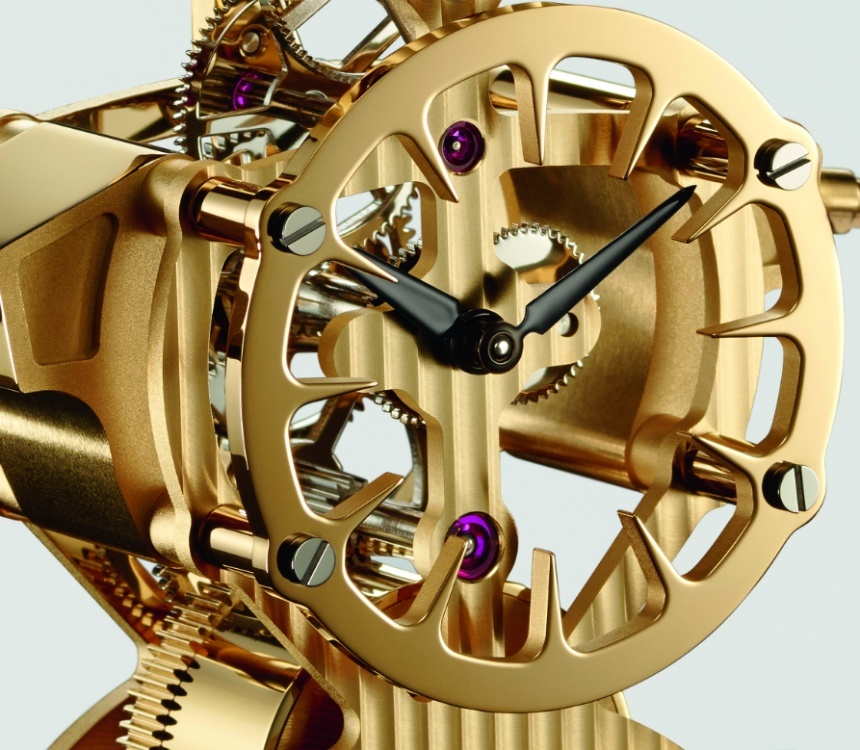