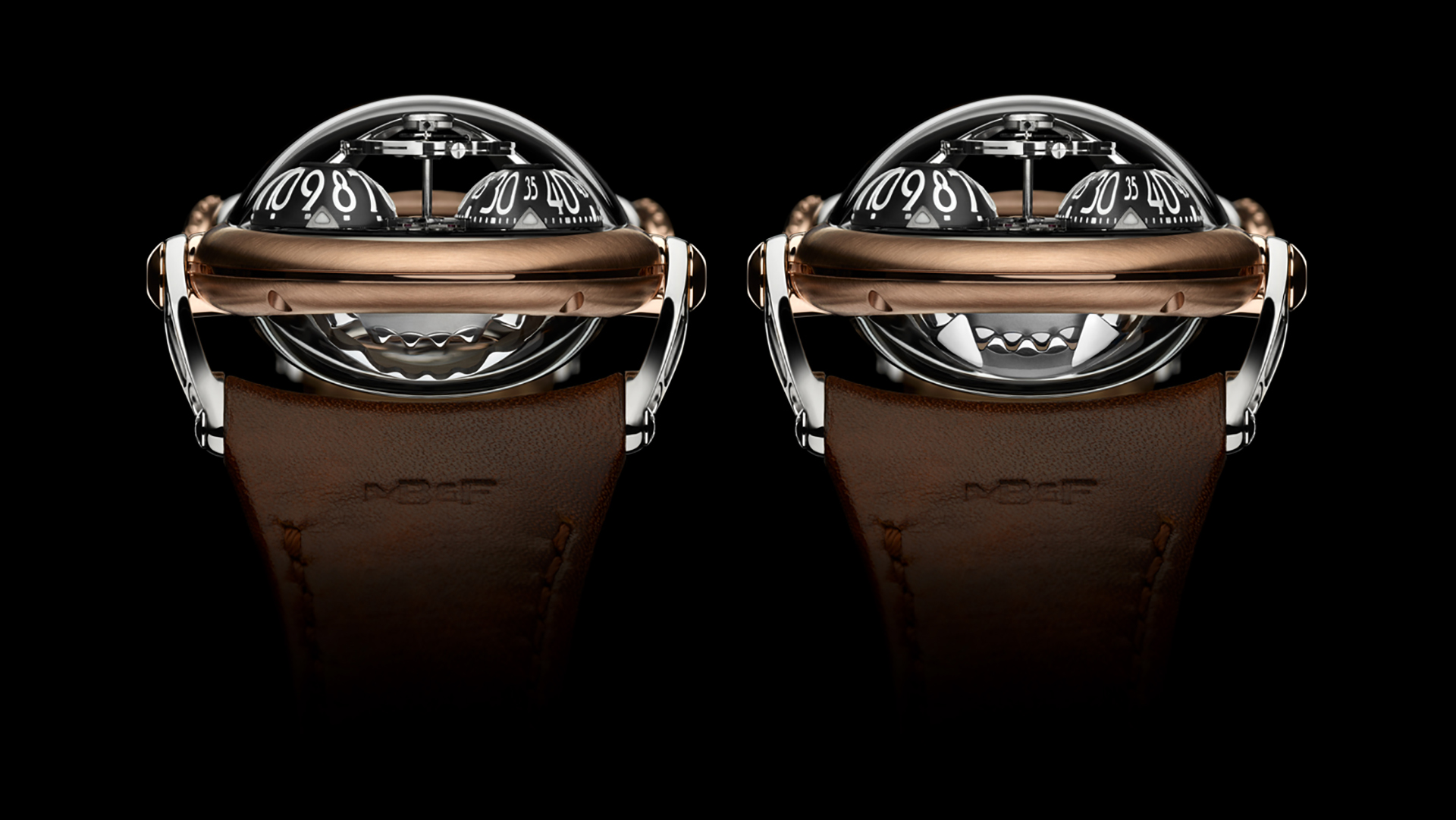 There have predominantly been two schools of thought when it comes to crafting an ultra-luxury timepiece. On the one hand, there are brands with centuries of heritage creating beautifully detailed, massively complicated, and ultimately extremely traditional watches. On the other, you have the avant-garde, with younger and more daring watchmakers eager to deconstruct the notion of a mechanical watch without taking themselves too seriously in the process. Perhaps the best example of this second group is MB&F, which has literally reshaped high-end watchmaking into a variety of fanciful forms over the years. Its latest creation in the Horological Machine series, the HM10 “Bulldog” is a perfect example of this with a streamlined “Buck Rodgers” futuristic form that takes inspiration from man’s best friend. 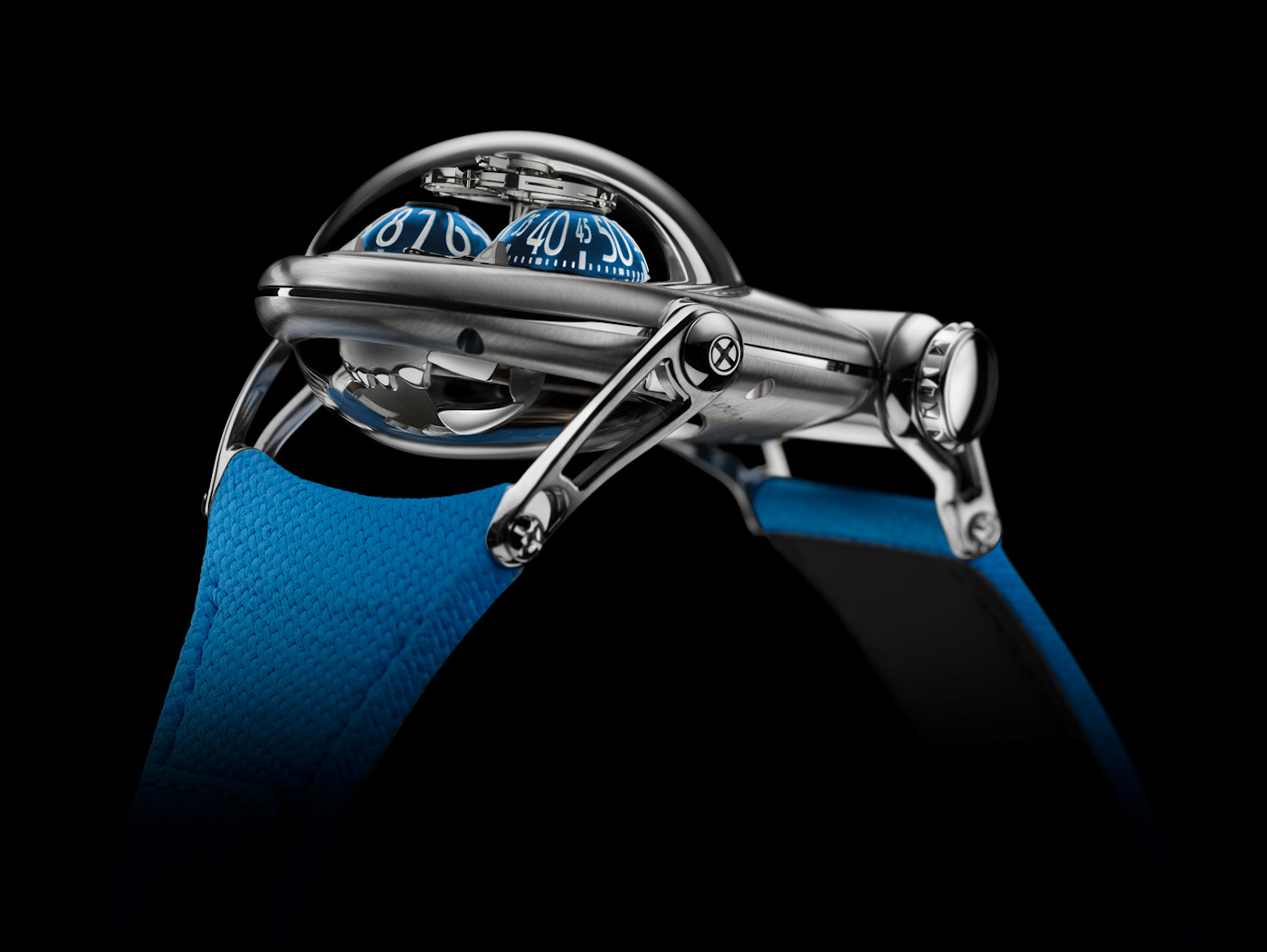 The case of the MB&F HM10 “Bulldog” shows off this playful and friendly inspiration right off the bat, with a 45mm by 54mm vaguely oval-shaped case in either 18k red gold or Grade 5 titanium. The attached lugs at the corners mimic the wide, squat stance of a bulldog, complete with shorter, more muscular “back legs” on the 12 o’clock side. Beyond the vaguely doglike form, however, the most striking attribute of this case is the exaggerated bubble sapphire crystals on both the top and bottom of the case. These two crystals, housing an unobstructed view of the unorthodox dial and movement, bring the total height of the case to a whopping 24mm thick, but as more of a piece of wearable sculpture than a serious daily-wear timepiece, this is less of an issue than it seems. 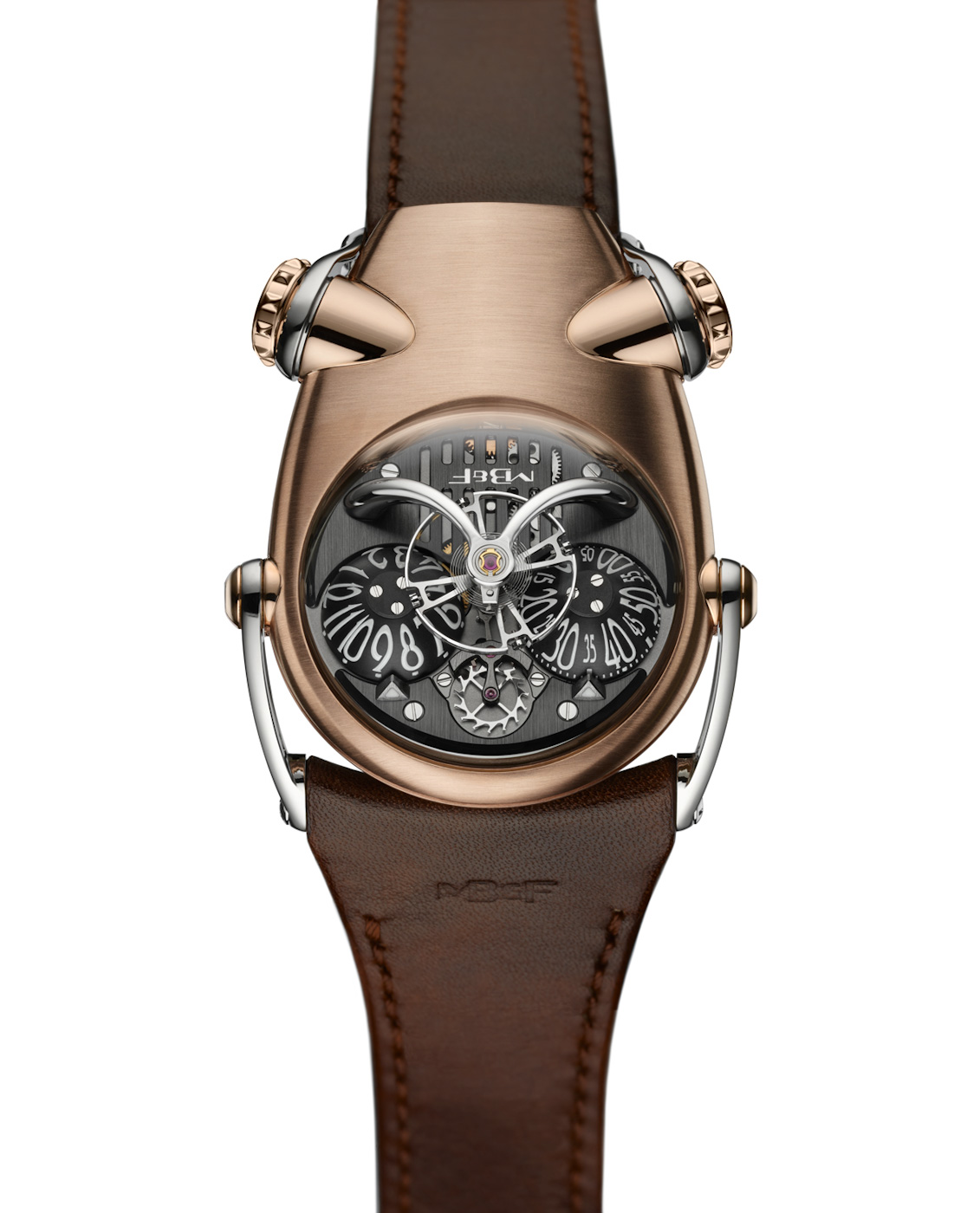 Like the case, it’s difficult to call the dial of the HM10 “Bulldog” a dial in the traditional sense. It’s a bit of a deconstruction, dominated by MB&F’s signature floating balance bridge along with two domed wheels (black on the red gold variant, rich blue for the titanium version) with pointers for hours and minutes. When looking at the case side-on from 6 o’clock, however, the real intent of this unorthodox design comes together. The underslung dome of the sapphire caseback features a set of stylized metal jaws complete with teeth, serving as a power reserve indicator. When the jaws are wide open, the reserve is full, and when the mouth is closed it’s time to wind the watch again. Combined with the “eyes” of the rotating hour and minute domes, the entire package comes together to form a friendly canine face. It’s the sort of playful, retro-futuristic deconstructivism that has become MB&F’s signature dish, and the simplicity of the elements at play here only serve to improve the concept. 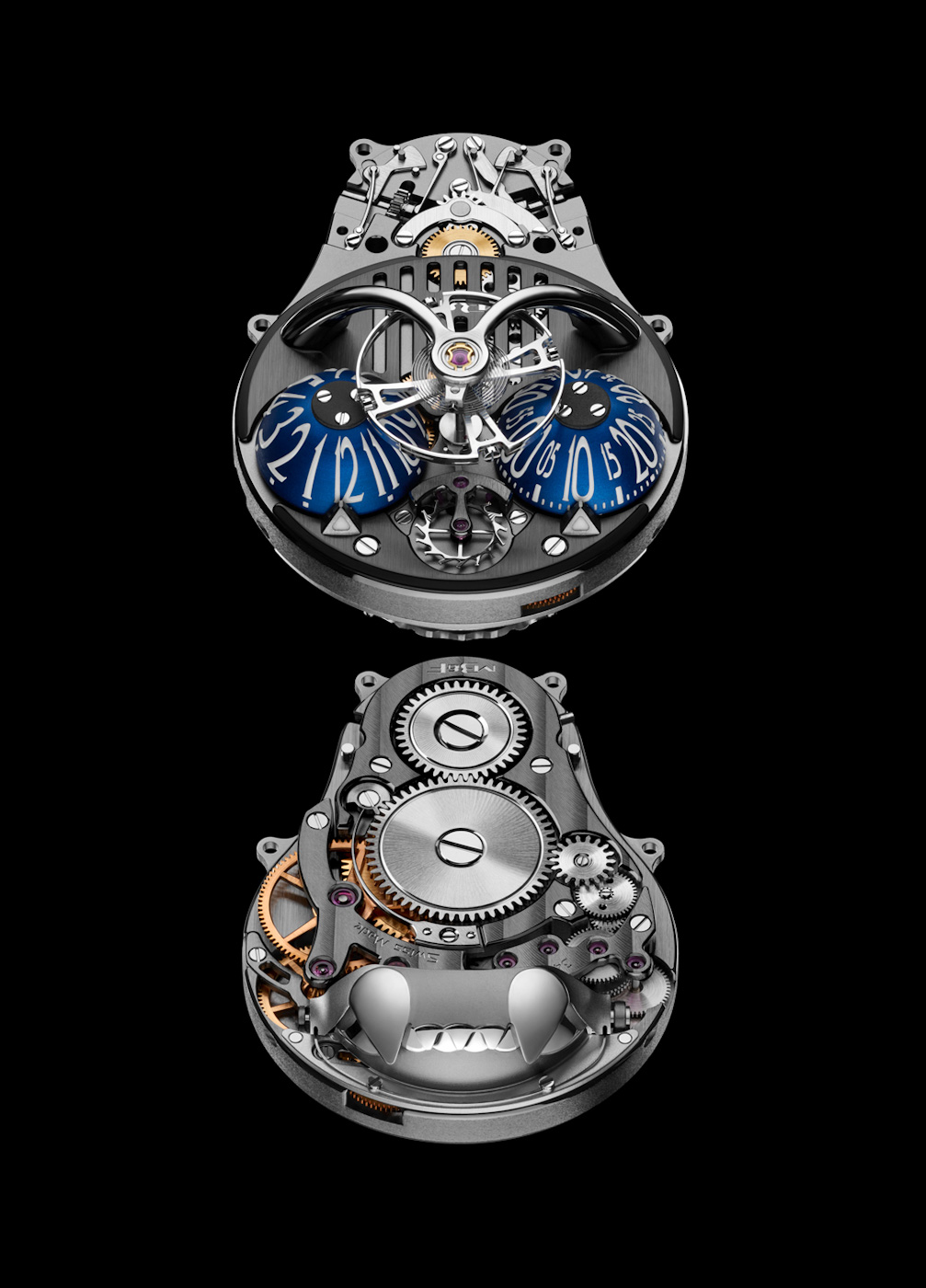 As one might expect with such an unorthodox watch, the manual wind HM10 movement is no ordinary powerplant, using a dual-crown system with dedicated crowns for both winding and time-setting. Outside of the unusual structure, the 34-jewel movement offers a far more ordinary 45-hour power reserve. 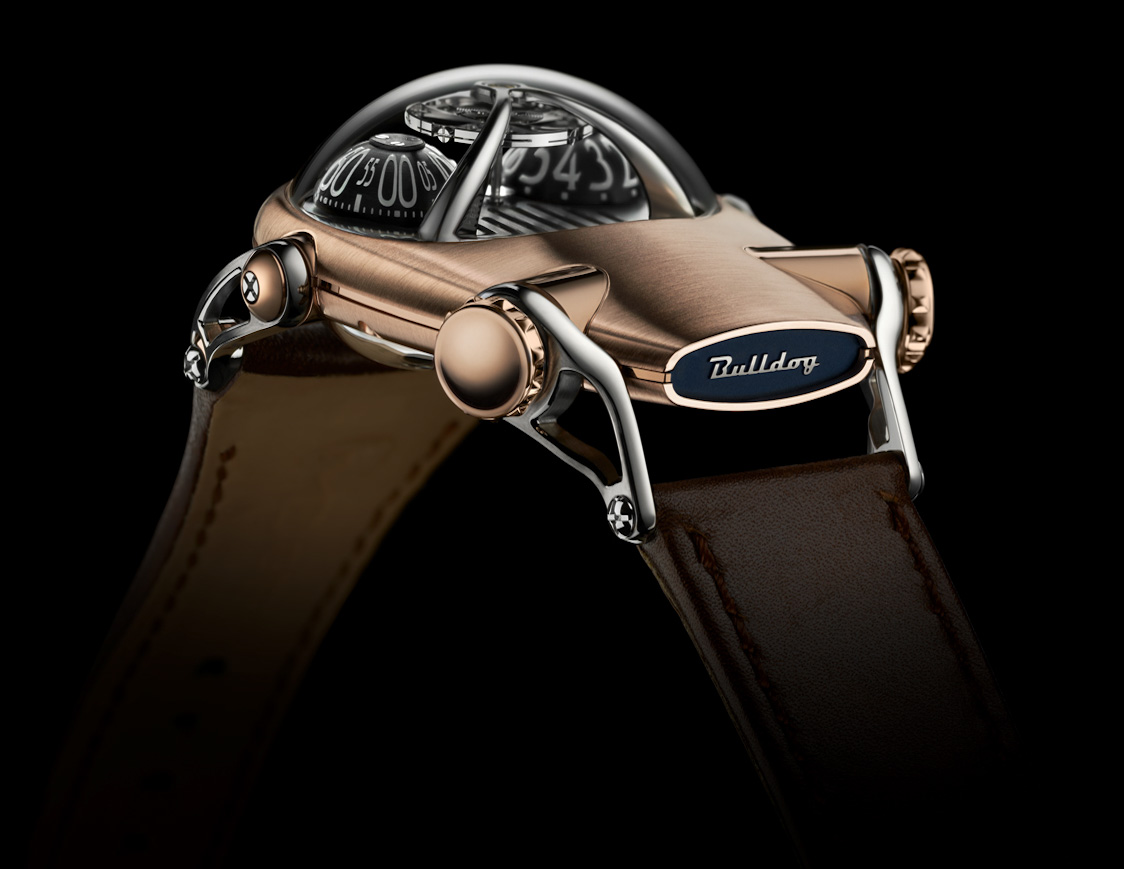 MB&F pairs the HM10 “Bulldog” with a dramatically tapering leather strap in mahogany brown for the red gold variant and electric blue for the titanium case. Interestingly, both variants also feature a unique buckle system, with the red gold model featuring a custom deployant clasp while the titanium version opts for an unusual Velcro system. 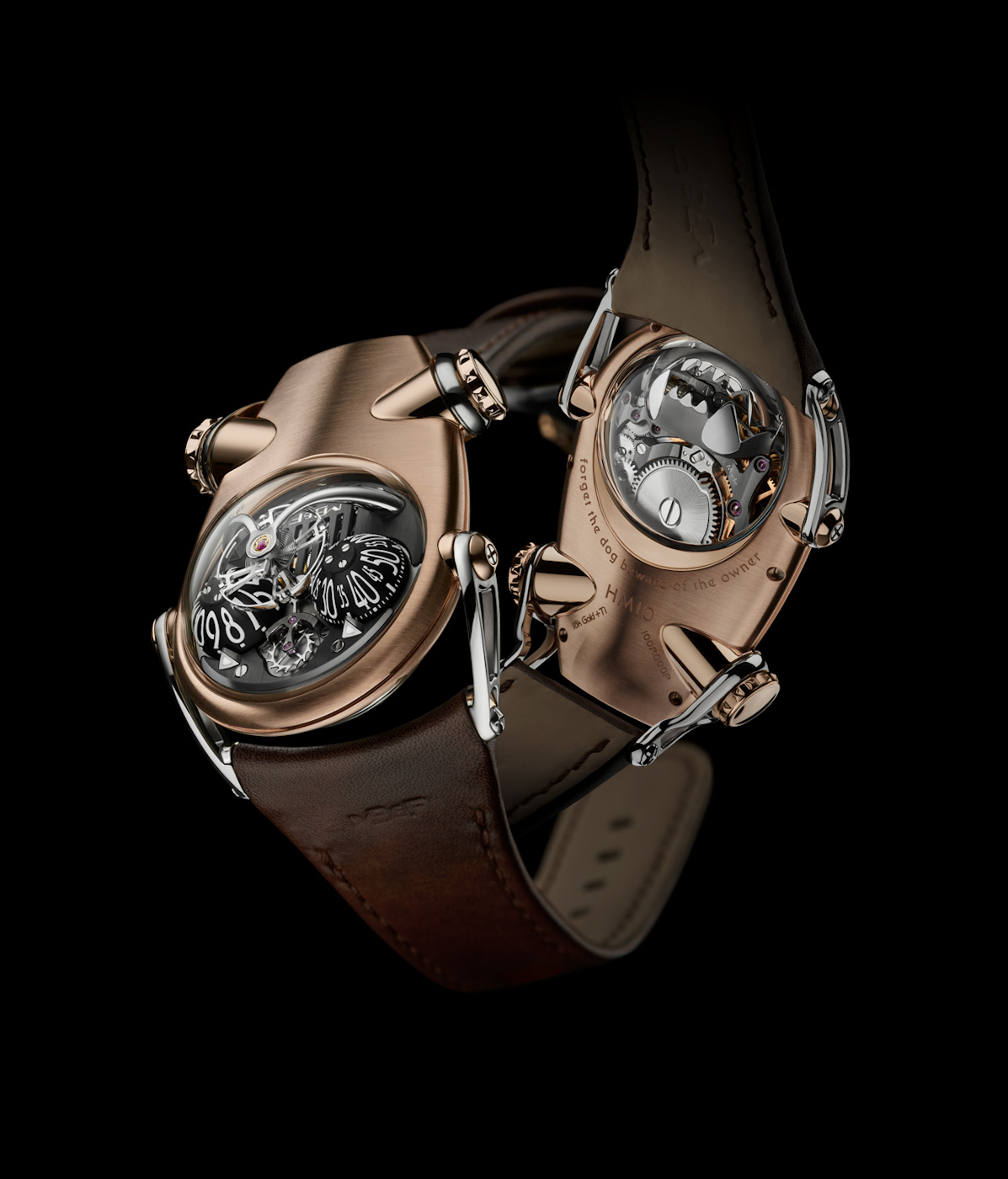 There’s no denying that the MB&F HM10 “Bulldog” is a deliberate attempt at creating something that won’t appeal to everyone, but regardless of whether you fall into the “love it” or “hate it” camp it’s difficult not to appreciate the sheer creativity at work here. The HM10 “Bulldog” is available now through authorized dealers, at an MSRP of $105,000 for the titanium model and $120,000 in red gold. For more information, visit the brand’s website.