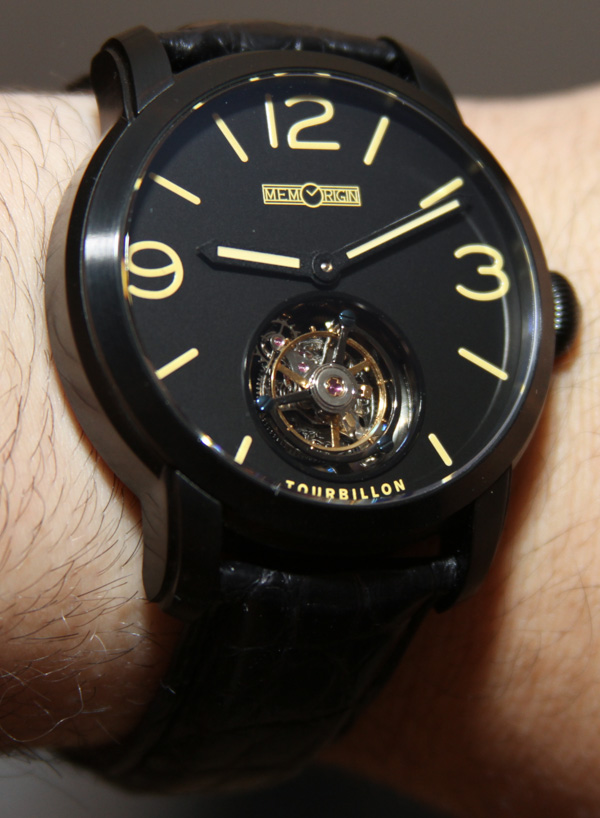 A lot of the times that we post a video about some cool, expensive Swiss watch on the aBlogtoWatch YouTube channel, we get a regular type of comment. In some manner or another, one of our viewers says something akin to “I will wait until the Chinese make one for a few hundred dollars.” Yea, I get that timepieces are expensive, sometimes crazy expensive, but it is true that the Chinese can copy just about anything? No, and I think most people know that. One area that they have however been more successful in stealing thunder away from the Swiss has been with tourbillon movements. The Chinese ardently pushed to replicate, in high-quality, the magic of the little revolving balance wheel. This is one of those.

Don’t let me get off on the wrong foot by making this review sound like I am talking about a Chinese copy of something European. That isn’t exactly the case here. My opening point was however to suggest that in the case of getting a tourbillon, there are fair offerings from Chinese brands that are all less expensive than their European counterparts. Are they analog watches or replicas? No. They are merely Chinese expressions of the same complications, and the best of them have some Asian flair. This is a review of the Memorigin Military Tourbillon, and I have to admit that after several months of wearing it off and on, I’ve grown quite attached to it. 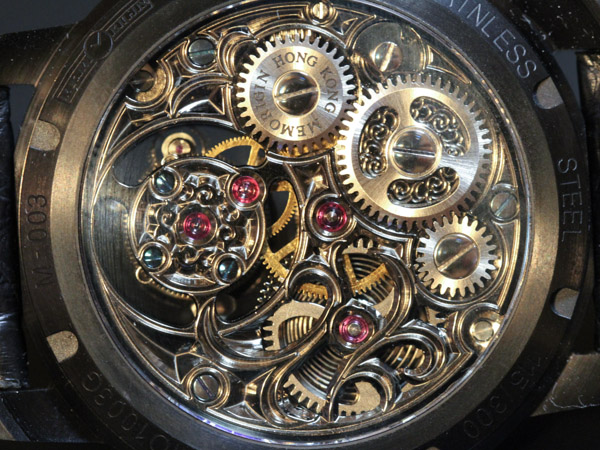 Hong Kong-based Memorigin is a brand we’ve discussed before. In this past article we showed you some of their more uniquely designed watches made for the Asian market. The Military Tourbillon (here ref. MO 0707) is a more world-friendly design. With a Panerai-style dial in yellow mixed to a simple black-colored round case, the addition of a tourbillon is a charming, and unexpected addition to the design. This particular mixture of complication and simple sport isn’t something you’d ever see out of Switzerland, and it is almost ironic. Though for me it seems to work.

Flip the case around and you’ll see the exposed manually wound movement through the case back window. Memorigin designs them to look more classy than sporty with swirly engraved bridges and other decorative motifs on the dark gray colored metal. If you look closely through the tourbillon on the dial-side you can see more of the decorative features under the tourbillon on the movement plate. The mixture of sport and classical elements continue with the sapphire crystal cabochon in the crown. None of this makes sense on paper, but in execution, at least for the right people, it makes perfect sense. 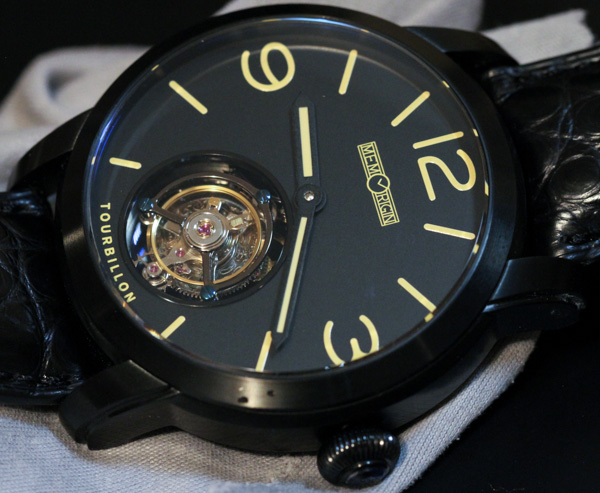 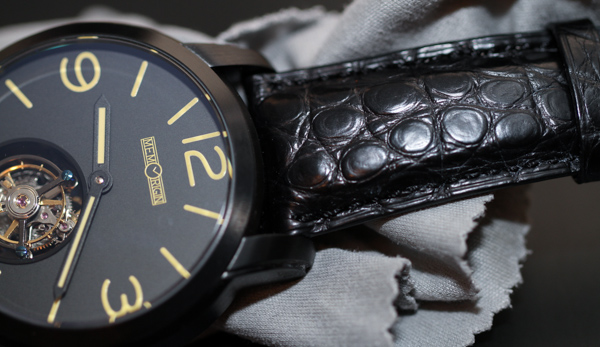 Not everything out of China makes sense to us in the West. Traditional Chinese design is something we don’t see very much of and their Western amalgamation products seem to mix and match various things in ways that are often confusing to everyone but the people who combined them in the first place. Some could argue that is the case here. Is the Military Tourbillon a lot like putting fine leather seats inside of a Hummer? In a sense it is. At the same time the design is more playful and fashion-oriented. This is an animal you won’t find in nature. A designer animal if you will.

Compared to other more elaborate Memorigin tourbillon watches, I wanted to review the Military Tourbillon the most because of its restrained simplicity. One of the reasons that European design is often much better than Chinese design is that Europeans have a better grasp of the “less can be more principle.” A good example is that many Chinese tourbillon-based watches have day/night indicator discs on them. It isn’t a useless complication, but it isn’t a particularly pretty one. European watches for the most part don’t have day/night indicator discs because they understand that aesthetically they don’t add to a luxury product. This watch feels a bit more akin to that ethos, rather than the typical Chinese tendency to stick as much great stuff in the same package as possible. 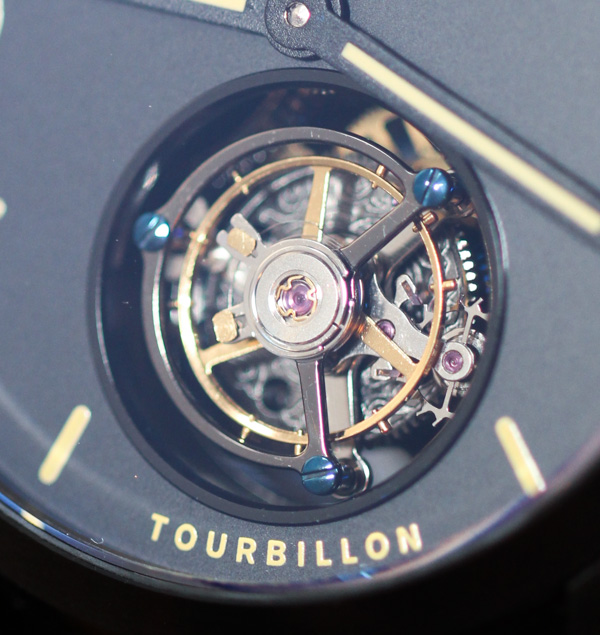 Little things like putting “tourbillon” on the dial are unnecessary. Refined customers know that labels such as this detract from an otherwise clean approach. It isn’t stating “tourbillon” that is luxury, it is being able to enjoy the tourbillon that is luxury. But aside from really minor stuff like that, the Military Tourbillon is a pretty good effort in combining a popular sporty look and a popular high-end complication in one package.

While Memorigin is based in Hong Kong, not much is actually produced in Hong Kong anymore. Production is nearby in China, where the caliber MO 0707 manually wound tourbillon movement is produced. The movement is engraved as skeletonized for decorative purposes. It operates at 28,800 vph and has a power reserve of about 40 hours. You should also note that this is a flying tourbillon (which means it has no top bridge). From a chronometric standpoint we haven’t done any timing tests, but we figure it is probably just a bit less accurate than most Swiss tourbillons. 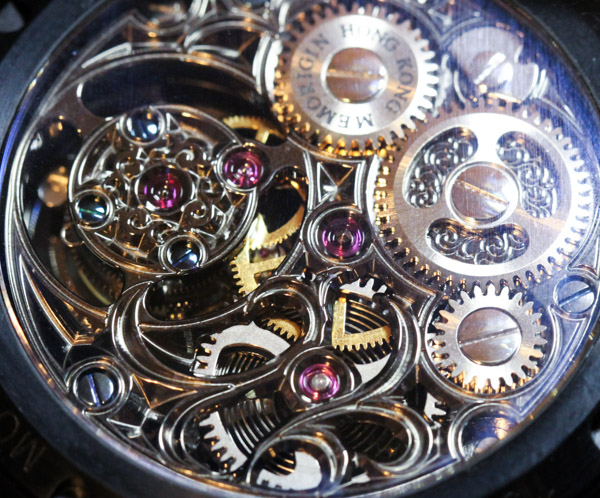 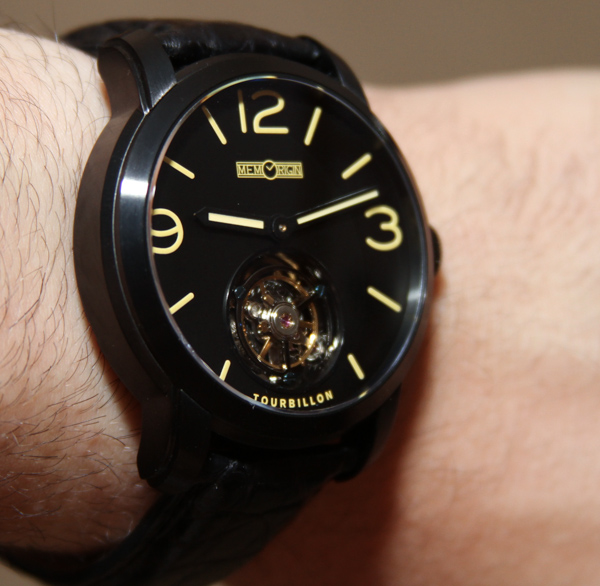 The black case, strap, and dial mixed with pale yellow hands and hour markers works well. Visibility is good, and the indicators are coated with lume (though not the strongest lume in the world). The crystals are sapphire, and the case is water resistant to 50 meters. On the wrist, the steel case is 44mm wide and wears comfortably on the plush alligator strap. Memorigin isn’t trying to be a low-priced alternative to Swiss-made tourbillon watches. Instead, the brand more tries to be a home-grown Asian tourbillon brand with its own personality that just happens to offer a lower-priced alternative to something from Europe.

With the popularity of watches in Asia (especially mainland China) so high, the popularity of Asian watch brands is also on the rise. One of the most interesting elements of the Asian watch industry is that so few of them end up leaving Asia. There are dozens of brands made exclusively for the Chinese market that you’ll probably never hear about. Some of them are huge comapnies. Smaller ones like Memorigin represent a class of luxury Chinese brands, and in a sense is a new breed as the Chinese tend to only like foreign-made luxury brands. But again, that is also changing.

The Memorigin is certainly a unique product and one that I like, but not always for logical reasons. What is logical is that if you want a tourbillon but simply can’t afford a Swiss one, brands like Memorigin are a good place to look. But remember that affordable doesn’t mean cheap. Memorigin isn’t a copy-cat brand so you are getting a distinct unique character with them. The Military Tourbillon is further part of a limited edition of 300 pieces. Price is HKD $19,800 (which is about $2,500 USD). memorigin.com

Necessary Data
>Brand: Memorigin
>Model: Military Tourbillon
>Price: $19,800 HKD
>Would reviewer personally wear it: Yes
>Friend we’d recommend it to first:  An experienced watch lover who values style and a good sense of humor over pure class-ism and classicism.
>Worst characteristic of watch:  Could use better luminant, and “Toubillon” label on dial is unnecessary.
>Best characteristic of watch: Cheeky mixture of Panerai-popularized military dial design with a lux complication makes for a unique wearing experience that is hard to define.