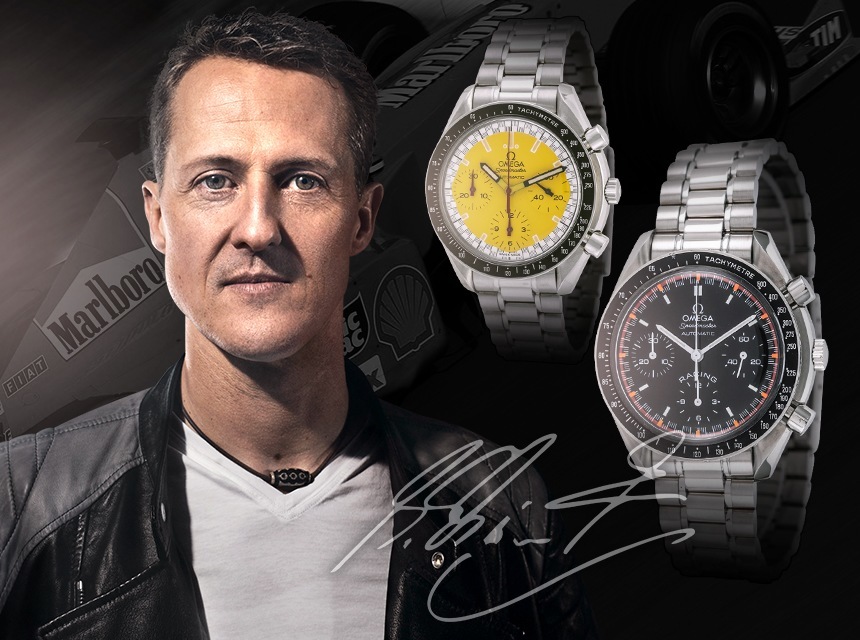 Among fans of Formula One, the name Michael Schumacher is spoken in hushed, reverent tones, for it belongs to a man who, even in this modern age of hyperbole, can rightfully be called a racing legend and, perhaps, the greatest driver of all time. Active from 1991 to 2006 and again from 2010 to 2012, the German driver won seven Formula One (F1) World Championships, holds the record for most victories (91), and in 2002 became the only driver in F1 history to finish in the top three in every race in a season (breaking the record for most consecutive podium finishes concurrently), among other accomplishments. It is unsurprising, therefore, that he was approached by Omega to become a brand ambassador for the Swiss watchmaker, lending his name and influence to a series of special editions of their iconic Speedmaster lineup. Though no longer produced, fans of the series will find that on the second-hand market, these watches represent excellent value compared to other lines of used Omega Speedmaster watches and are an excellent way to combine two passions into one: racing and watches. 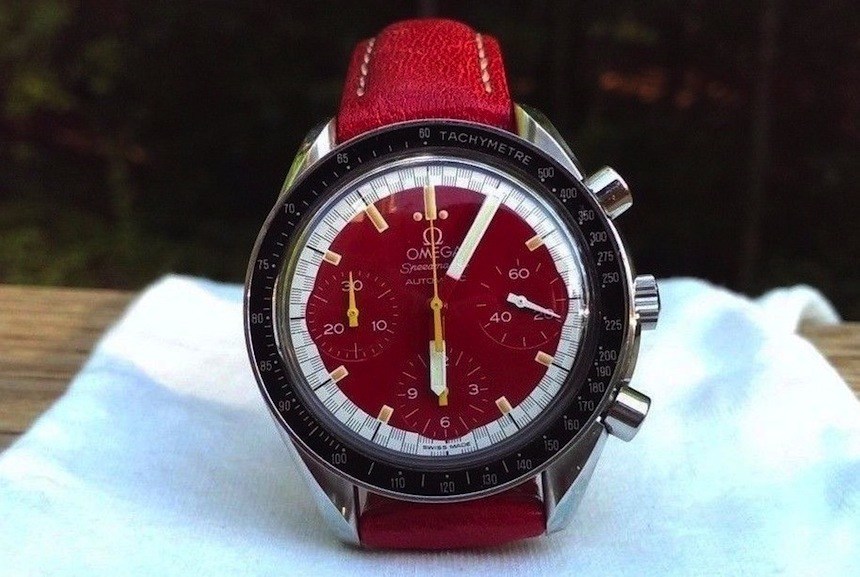 In 1996, the first version of the Omega Speedmaster Schumacher was revealed by Mr. Schumacher at his go-kart track in Kerpen, Germany. It came with a choice of either a red or yellow dial (celebrating Mr. Schumacher’s first year driving for Ferrari) and a choice of either a red or yellow leather strap or stainless steel bracelet. The production ran from 1996 to 1999, and though the case itself did not bear the name “Schumacher,” there were a number of unique items included with the watch that marked it out as something unique. The watch came packaged in a small rubber tire that could be pulled apart, splitting at the middle to reveal the watch. On the right side of the tire was Mr. Schumacher’s signature and on the left were Omega brand markings. Included was a small stand that prevented the whole get-up from literally rolling away from the owner. It had a hesalite crystal, snap-on back, and featured an automatic 1141 movement. The case measured 42mm with the crown and 39mm without (this sizing remains consistent throughout the editions). Interestingly, the movement’s serial number was stamped on the outside of the rear cover and not on the movement itself. 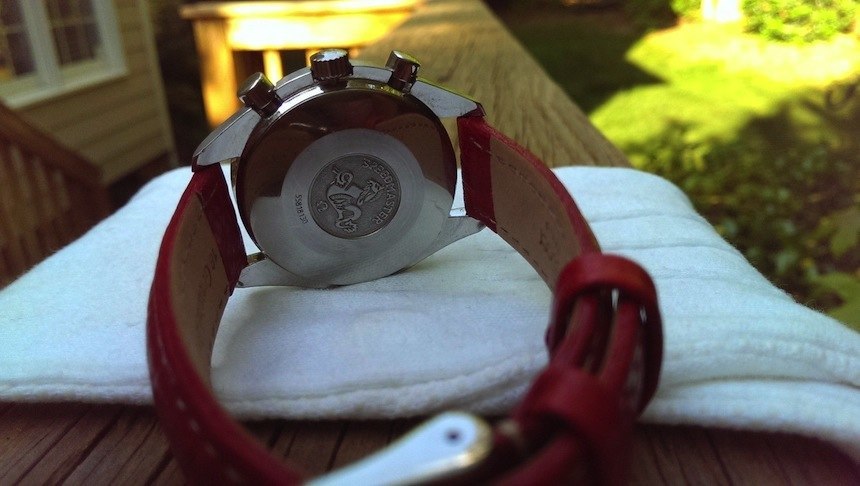 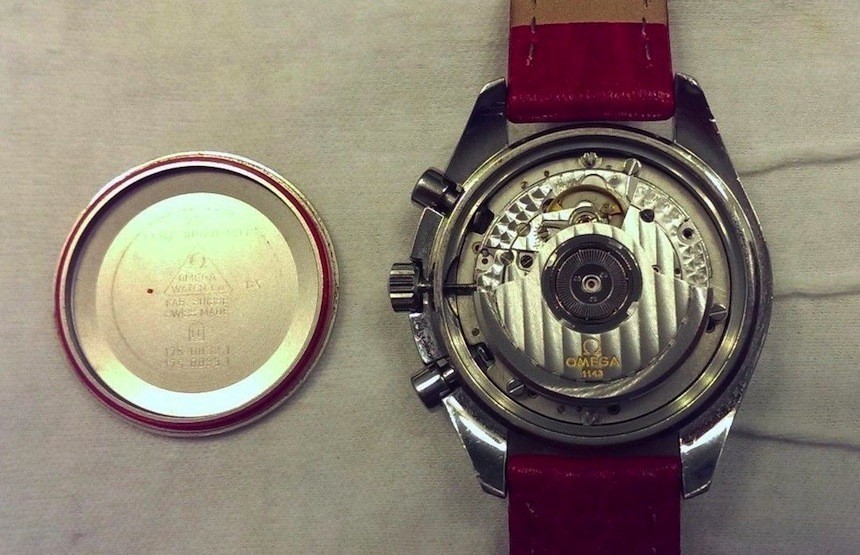 Following the first Omega Speedmaster Schumacher came the Omega Speedmaster Racing Schumacher World Champion 2000 Limited Edition. This watch was numbered and limited to 10,000 pieces, of which 6,000 had a black dial and 4,000 had a white dial. The watch featured the word “Racing” above the sub-dial at the six o’clock position and had red and orange checkered markings around the outside of the dial. It too had a snapback case but, unlike the previous edition, did bear Mr. Schumacher’s name, which was engraved into the back of the case along with his signature and the production number. It came with an option of either a stainless steel bracelet or black leather strap and had an Omega 3220 movement. 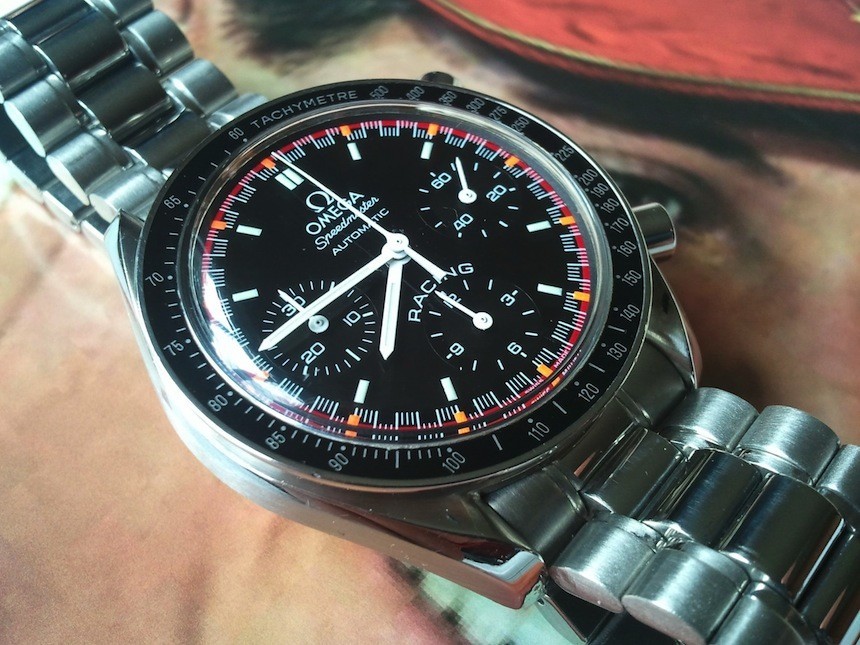 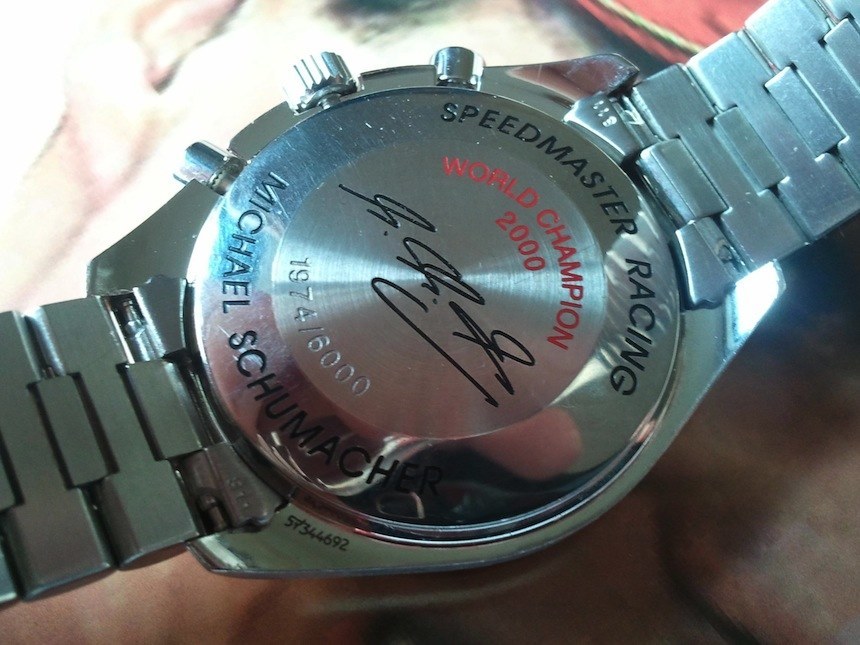 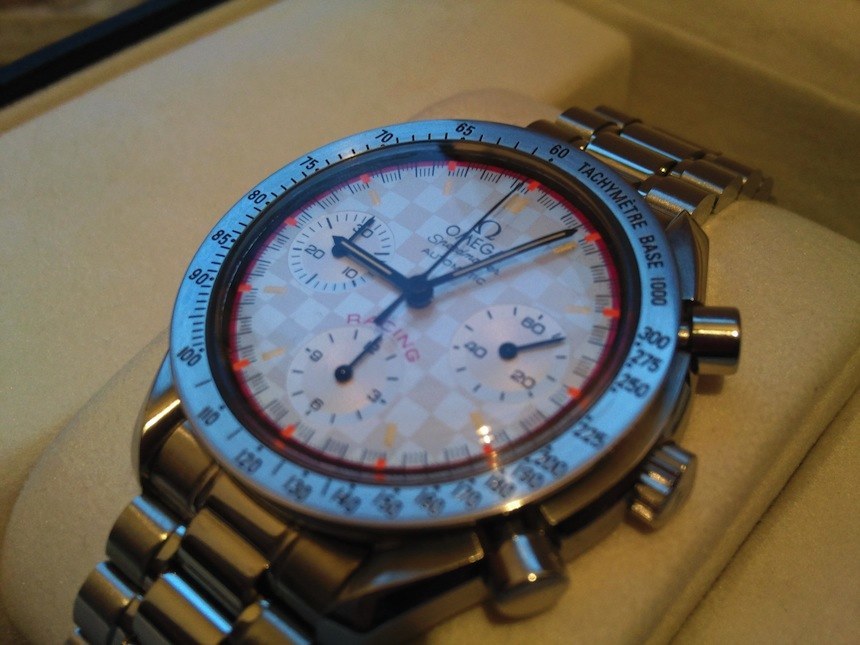 The following year, the Omega Speedmaster World Champion 2001 Schumacher Limited Edition, was released and limited to only 11,111 pieces. It had a sapphire crystal and a carbon fiber dial and an Omega 1152 automatic movement. The hour marks, as is typical with the Speedmaster, were small bars, everywhere except at the one o’clock position, which has a large “1” proudly displayed. 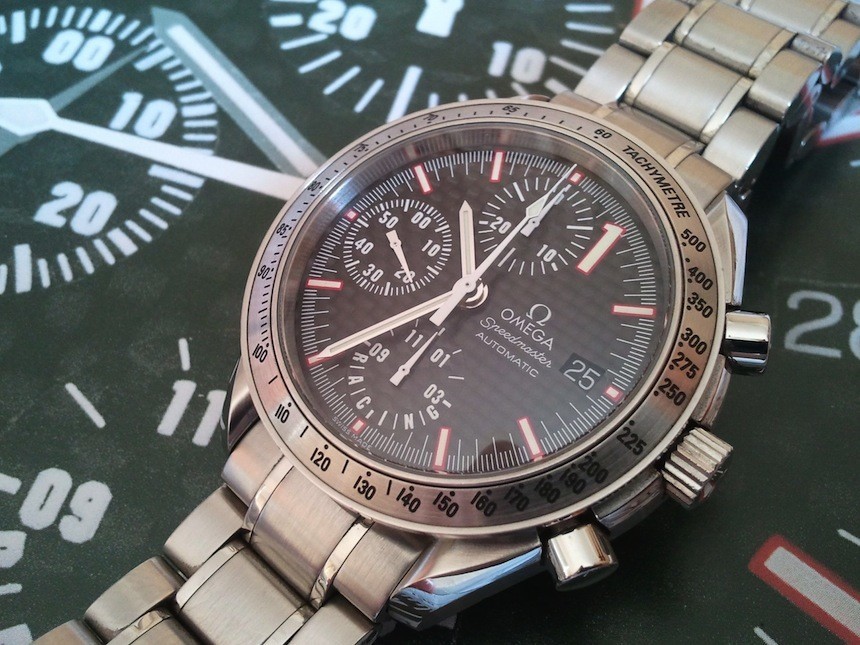 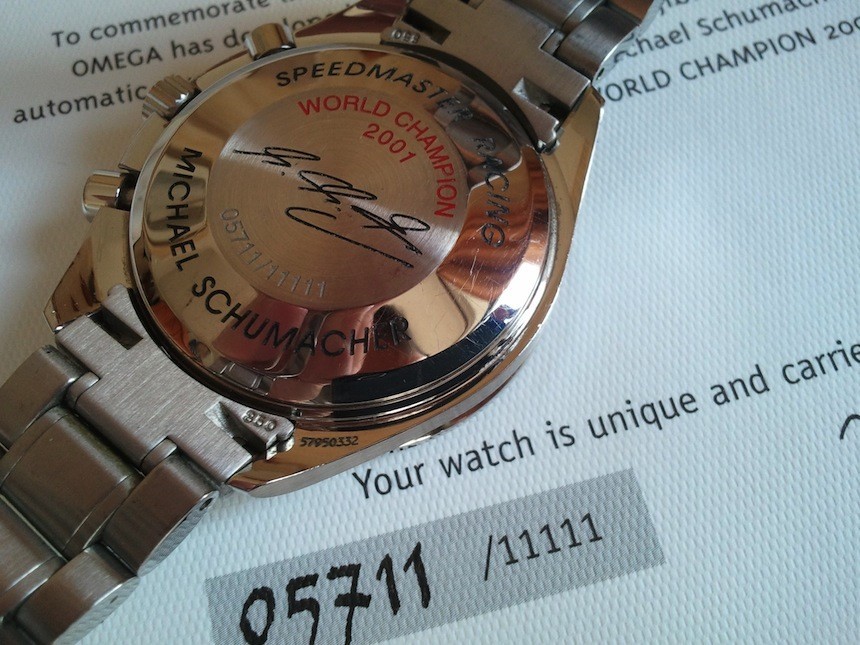 At this point, you may have noticed a small trend in the naming of the Omega Speedmaster Schumacher watches, and the next edition lived up to expectations. Named the Omega Speedmaster World Champion 2002 Schumacher Limited Edition, this edition was numbered and limited to 5,555 pieces. It featured a sapphire crystal and a carbon fiber dial and the word “Racing” appears below Omega branding text at the three o’clock position on the dial. The watch had an Omega 1151 automatic movement and was most famous for its day wheel. Monday through Saturday were displayed on white backgrounds, but Sunday, aka race day, was red. A reminder for any forgetful fans that it was time to tune in to the day’s pageantry. 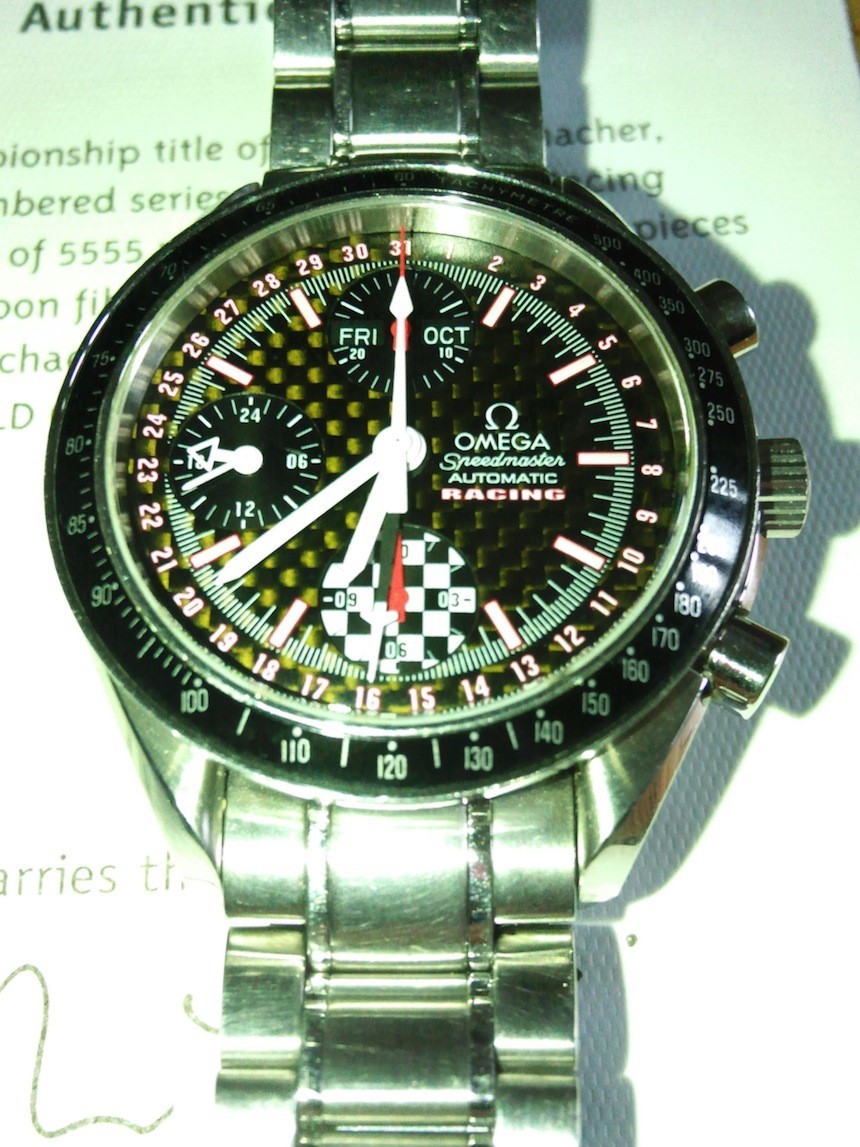 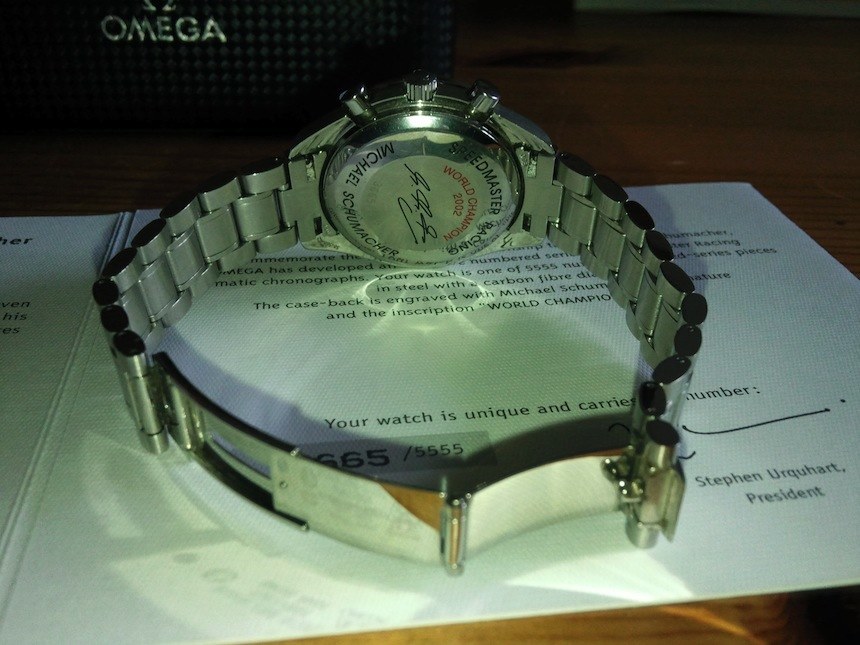 In 2002, Mr. Schumacher won his fifth world championship, tying the record of Argentinian racing legend Juan-Manuel Fangio whose last world championship came in 1957, a full 46 years earlier. The Omega Speedmaster Broad Arrow Michael Schumacher, cased in 18kt rose gold with choice of matching bracelet or black leather strap, honored this achievement in 2003. Engraved into the case was “Michael Schumacher – Five-Times World Champion.” It had a black dial and sapphire crystal and featured the Omega 3303 automatic movement. This was the first watch to feature Mr. Schumacher’s name on the dial itself, a fitting rise for prominence on the watch that was mirrored by his racing career. 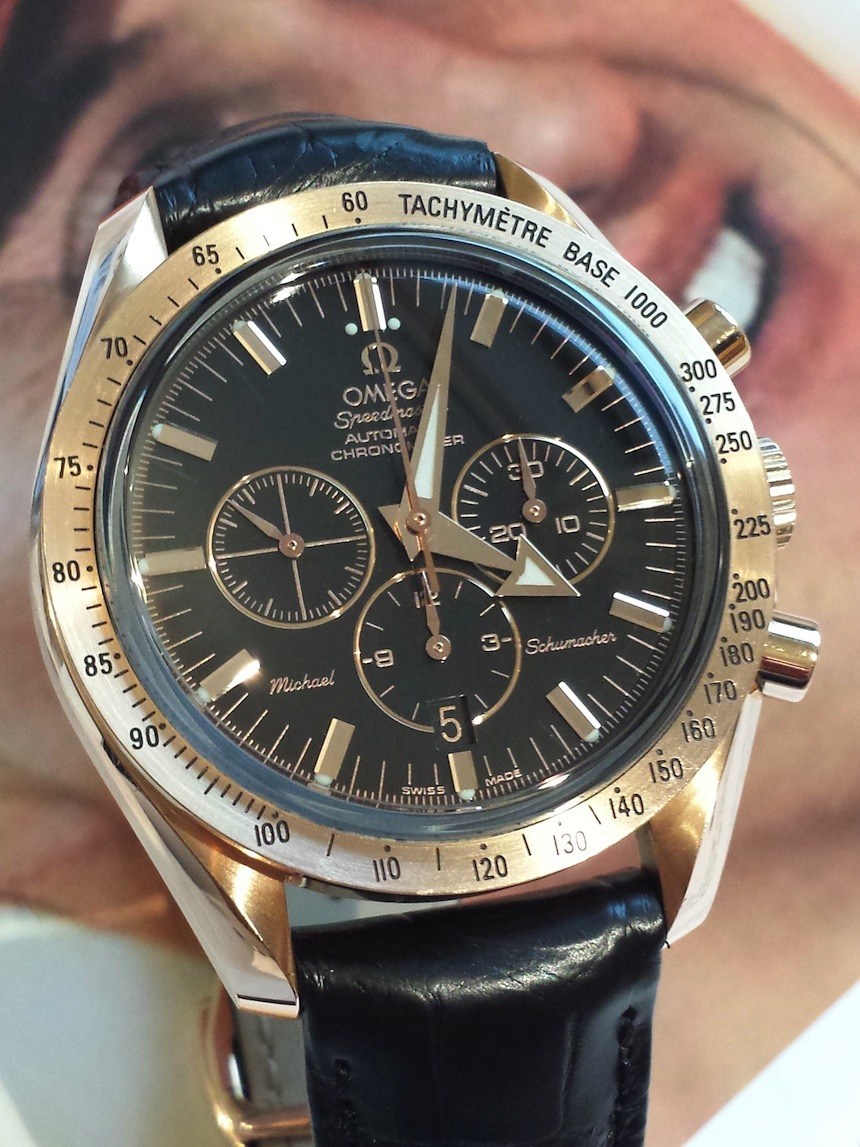 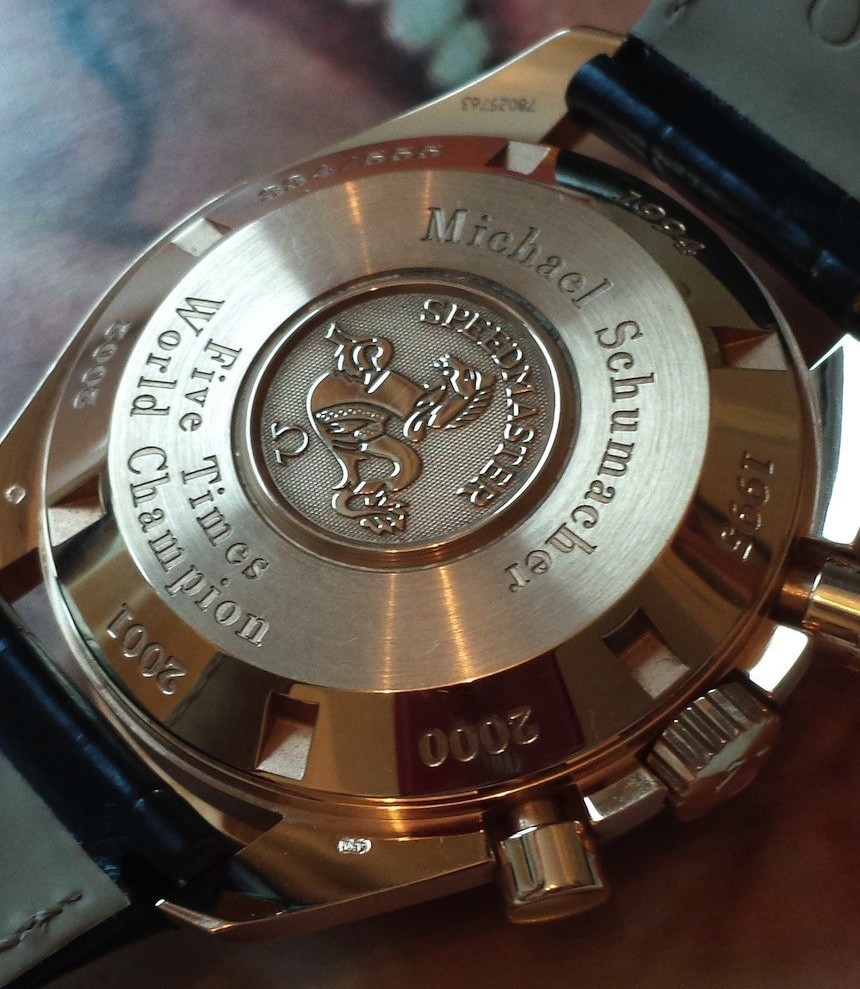 At the end of 2003, Mr. Schumacher did Juan-Manuel Fangio one better and claimed his sixth world championship, making him the most successful driver in the history of F1. This was commemorated in 2004 by the Omega Speedmaster Sixth World Title Schumacher Limited Edition, a series of 6,000 watches famous for their “panda” dials. 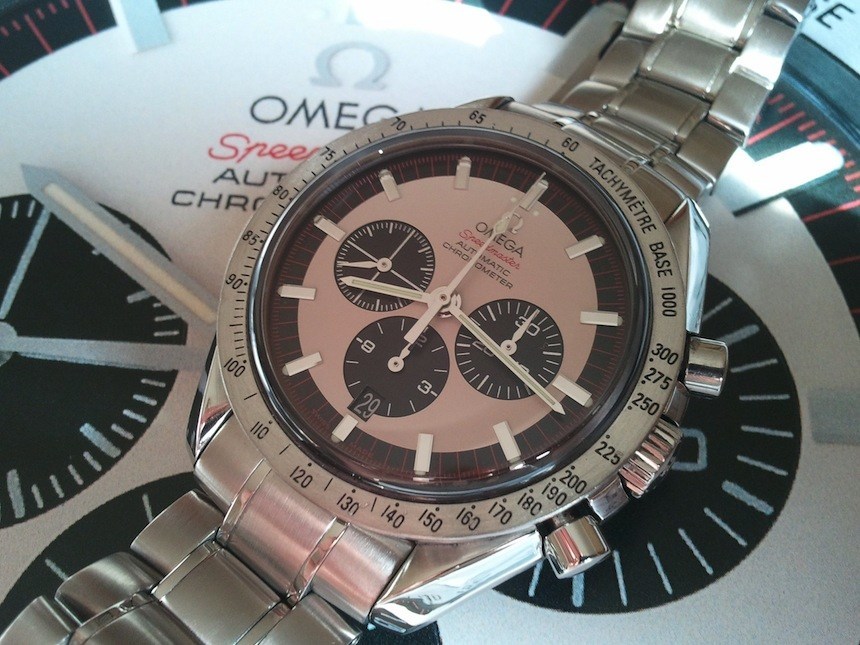 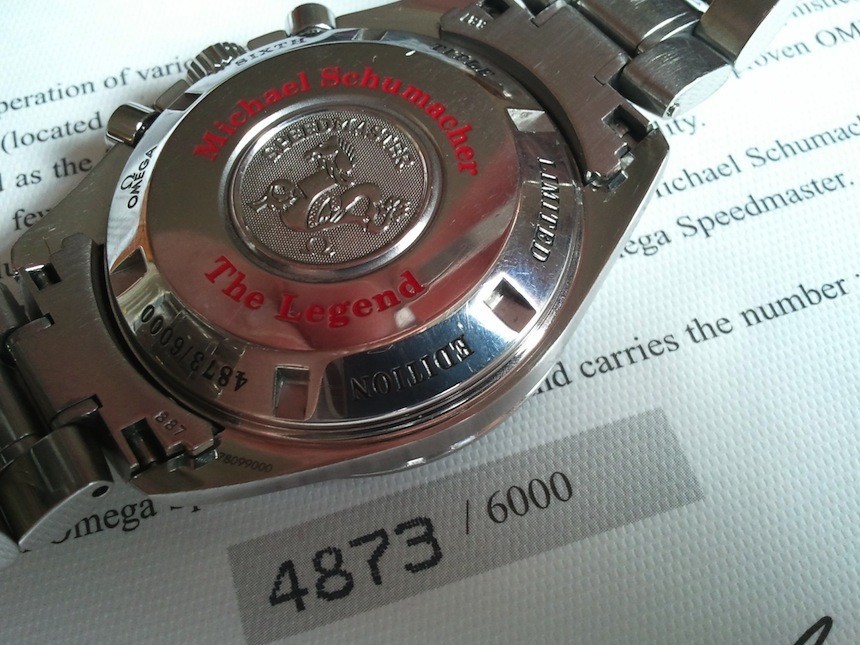 With Mr. Schumacher’s final title came the final Schumacher Speedmaster, the Omega Speedmaster Legend Limited Edition. This watch is easily distinguished from the rest with its first seven hour markers being replaced with numerals, counting up the number of titles won, all set on a subtly checkered carbon fiber dial. It is powered by an Omega 3313 movement and features a crystal display back, allowing easy viewing of the heartbeat inside. Around the bezel are listed all of Mr. Schumacher’s accomplishments: seven world titles, 250 F1 races, 68 pole positions, 91 victories, and 154 podiums. A well thought out and classic tribute to the legend. 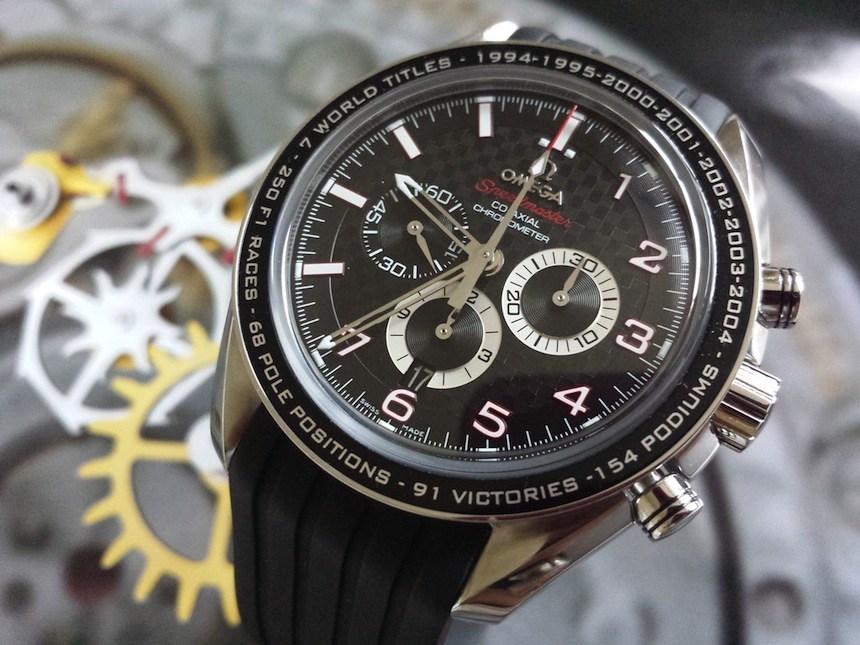 No longer produced by Omega, buyers interested in picking up one of the watches in this series will have to turn to the second-hand market. Of all the various series of Omega Speedmaster watches available, the Michael Schumacher series watches are fairly available, ranking fourth in volume sold on online auction site eBay, though at number four, they still only make up 3.3% of Speedmasters purchased from December 2014 through March 2015 (the range of available data that was collected for this article). Four watches on average were sold per month, with an average of 14 bids per watch meaning that though they are only available in smaller quantities, there is demand, though it must be noted that 14 bids could mean there were two battling buyers or up to 14 battling buyers per watch. 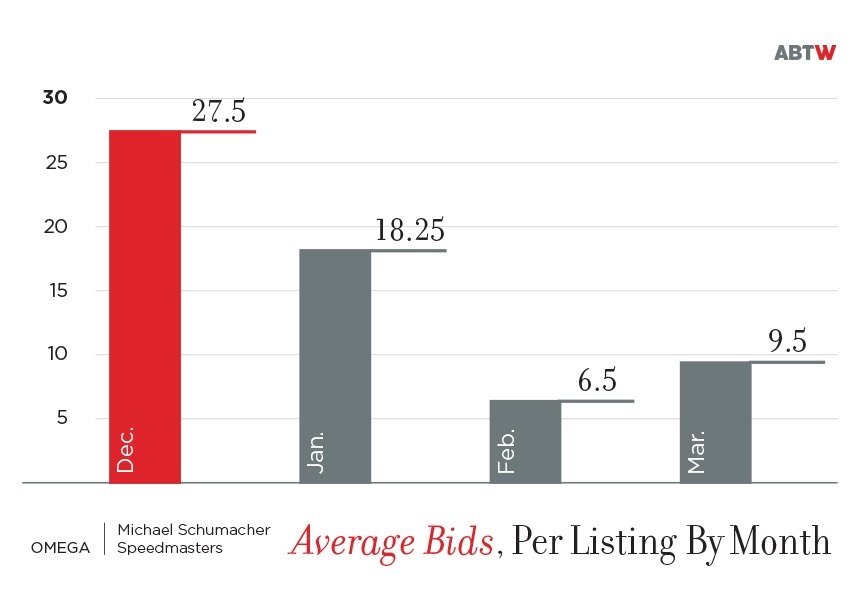 Even if the volume available is low, one highlight in regards to buying these watches on the second-hand market is that compared to other series in the Omega Speedmaster line, the Michael Schumacher series sells on the low end. The average price from December 2014 through March 2015 was $1,495.11, with a high of $1,999.00, a low of $1,112.00, and a median of $1,635.00. This can be compared to the Omega Speedmaster Professional, which has an average total cost of $1,927.06 and the Omega Speedmaster Olympic series, which has an average total cost of $2,327.67. As far as country of origin, 57% of the Michael Schumacher series Omega Speedmasters were sold by sellers from the United States. Interestingly, the remaining 43% were sold from sellers based in Japan, a testament to the combined global reach of the Swiss giant and the racing legend. 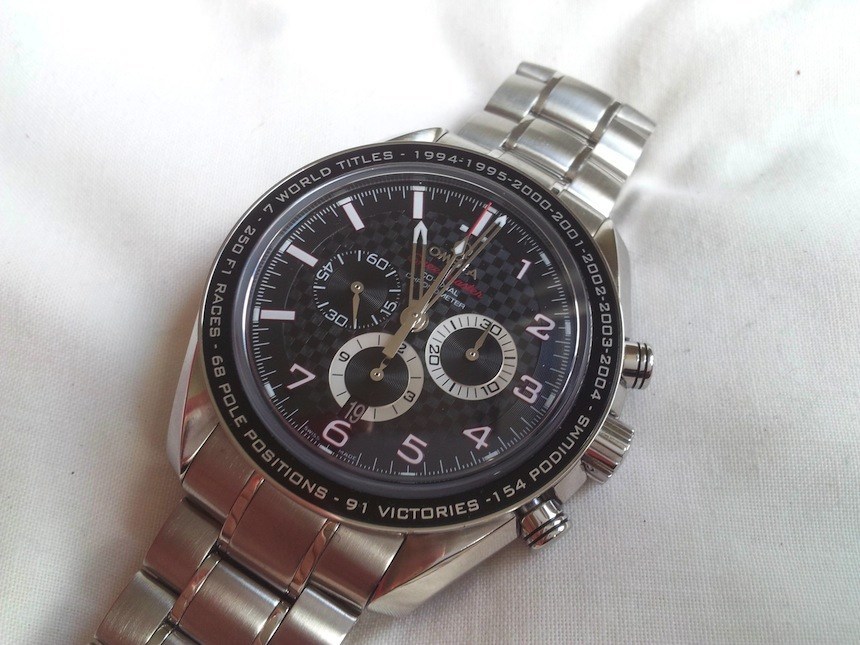 Interestingly, as his career progressed and his fame expanded, the accessibility of a “Schumacher” watch decreased. Series were limited to fewer and fewer watches and, as was mentioned earlier, Mr. Schumacher’s final Omega watch was an 18kt rose gold option priced for an elite buyer. This continued with Mr. Schumacher’s move to Audemars Piguet as a brand ambassador in 2010, where he was commissioned to help design a watch specific to his racing needs. Earlier this year, that watch was released, the Royal Oak Concept Laptimer, priced at a cool $229,500 and limited to 221 pieces. 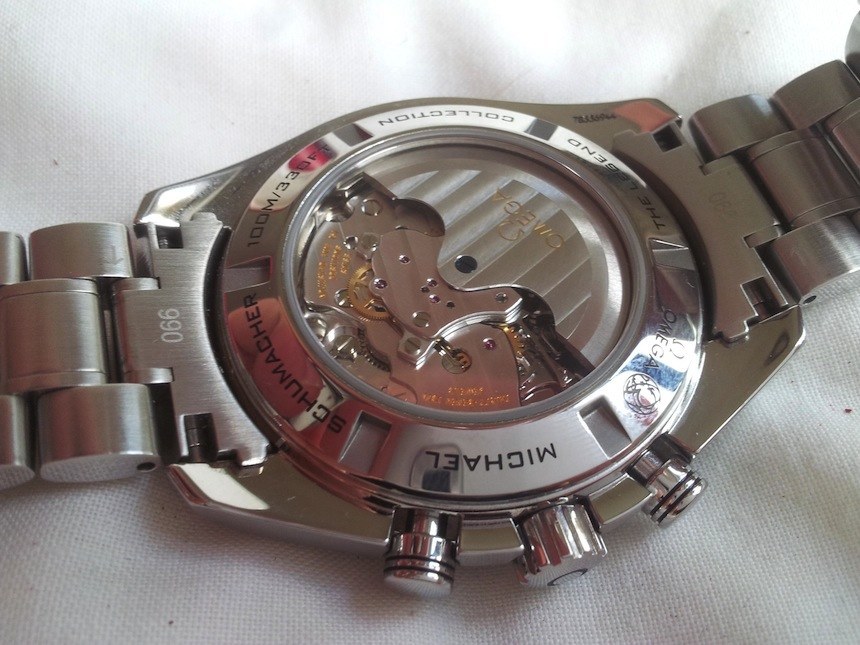 Twenty-four years after he first began racing in F1, Mr. Schumacher is still talked about as one of the greats, if not the greatest, but unfortunately, many conversations about the man have been much more tragic in tone these past few years. On December 29, 2013, while skiing near the French resort of Meribel, Mr. Schumacher was involved in a skiing accident while with his son and suffered serious head injuries. He was immediately airlifted to the hospital and placed in an artificial coma and operated on to relieve pressure on his brain, saving his life, but leaving him paralyzed and with severe memory loss. These past few years have seen small steps on the road to recovery, but it is still uncertain to what level he will ever function again.

Through this dark time for Mr. Schumacher and his family, there has been at least one ray of hope. His son, Mick, recently made a pre-season testing debut in the German Formula Four racing division. Should his career reach anywhere near the heights of his father’s, perhaps we will be seeing a second line of Omega Schumacher Speedmasters again in the future. michael-schumacher.de