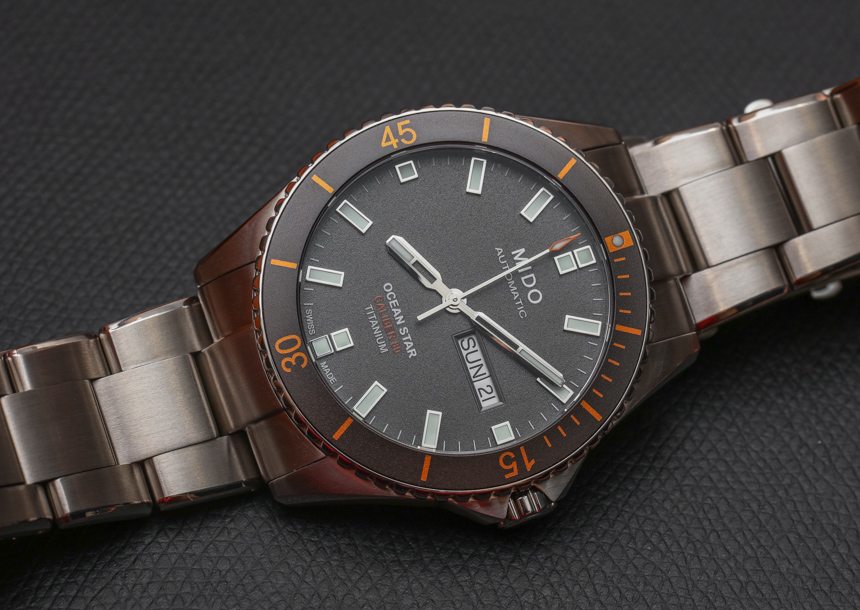 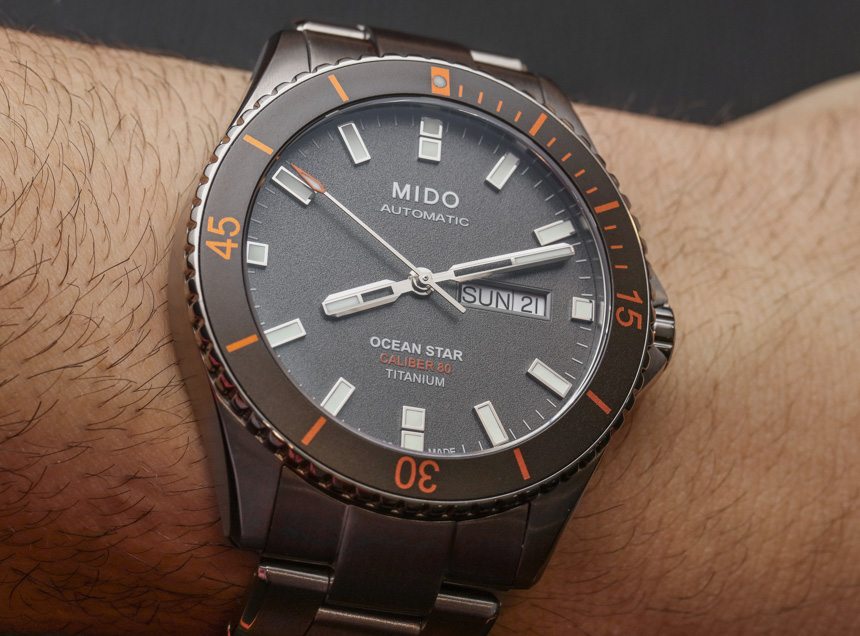 One of the surprise hits for me at Baselworld 2016 was the new Mido Ocean Star Captain V in titanium (reference M026.430.44.061.00). Mido is one of the less well-known Swatch Group brands, at least in the United States, but it has some cool watches such as the Commander and Multifort. I understand that Mido watches do particularly well in South America, actually… Anyhow, the brand’s flagship dive watch collection has always been the Ocean Star, and this is the Ocean Star Captain V (which came after the Captain IV). Mido produces the Ocean Star Captain V in steel models as well, in addition to the titanium model. Those aren’t bad either, but there is something quite special in the titanium model, particularly when you take cost into consideration. 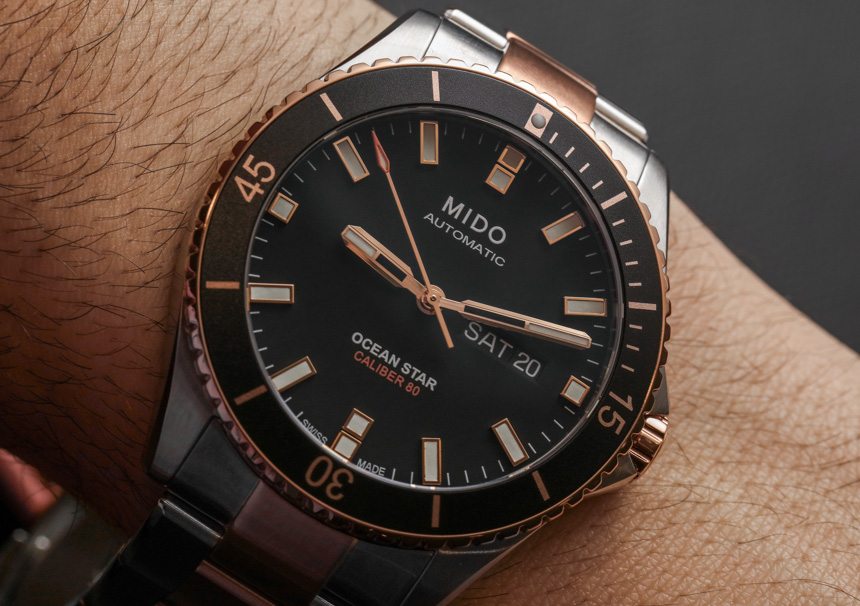 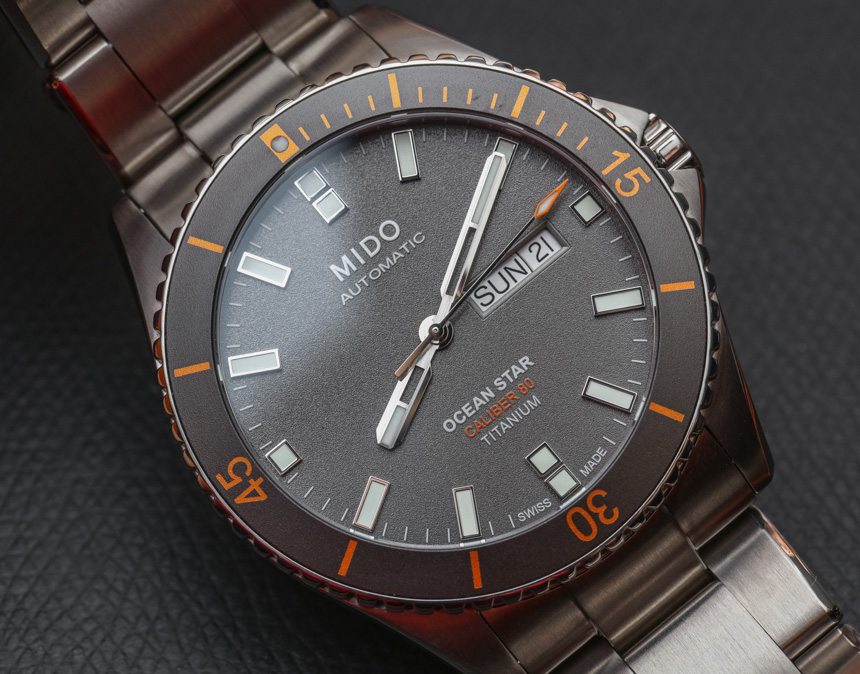 Just for comparison purposes, I’ll also include some images of a steel (with gold-toned parts) Mido Ocean Star Captain V diver watch so that you can see the difference. With the Captain V over the Captain IV version of the Ocean Star, Mido more or less redesigned the watch to be a lot more mature, but also timeless. Sure the Mido Ocean Star Captain is a conservative watch, but in the right ways. The overarching theme of the timepiece seems to be function, and so much of the watch is trying to not be showy that you get an excellent tool watch feel, with a real Swiss level of refinement, from an unexpected place. 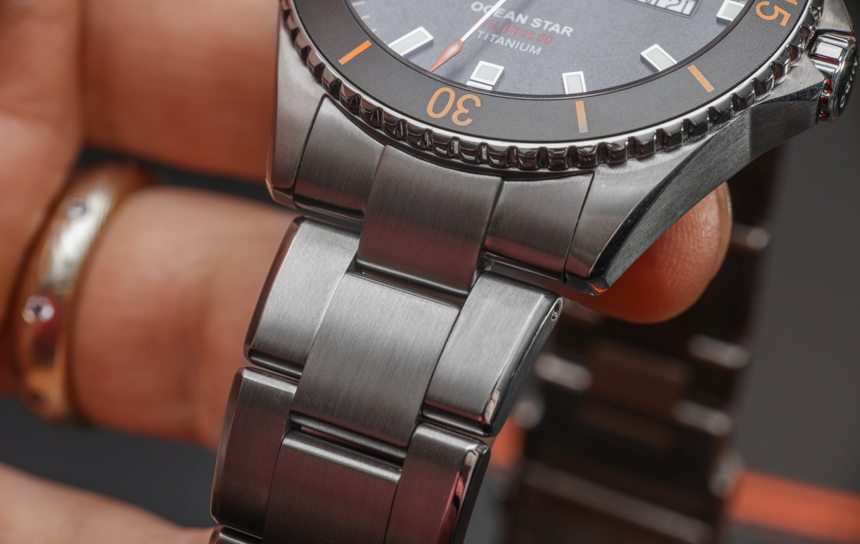 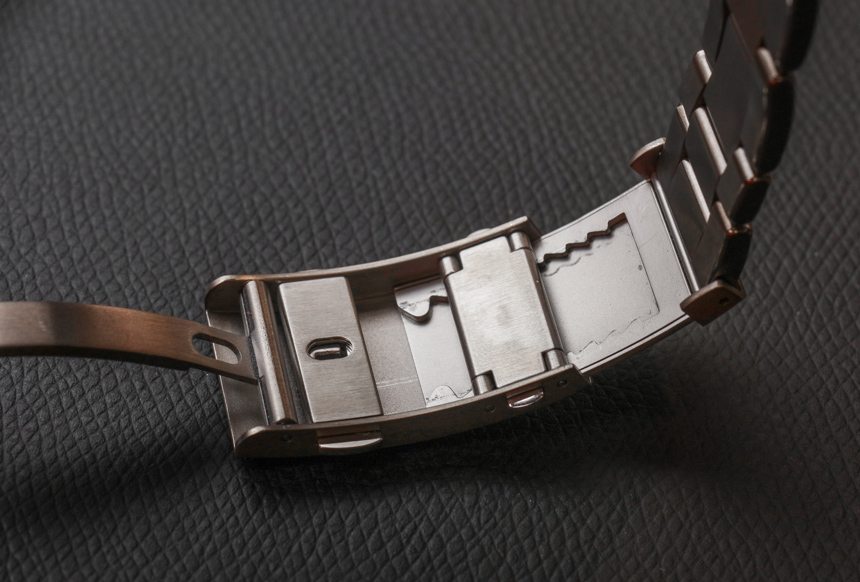 One of the first things you’ll notice when you pick up the mostly satin-brushed titanium case is the polished beveled edges. This is a minor, yet very important decorative feature of the watch and bracelet which is done so nicely. It is also totally unexpected at the price. Staying on topic with the bracelet, have a look at the deployant clasp that offers a nice little micro-adjust mechanism. It might not be a Rolex GlideLock system, but it works well and certainly gets the job done. Honestly, once you get a watch bracelet with a micro-adjust feature like this it can be hard to go back to not having one. 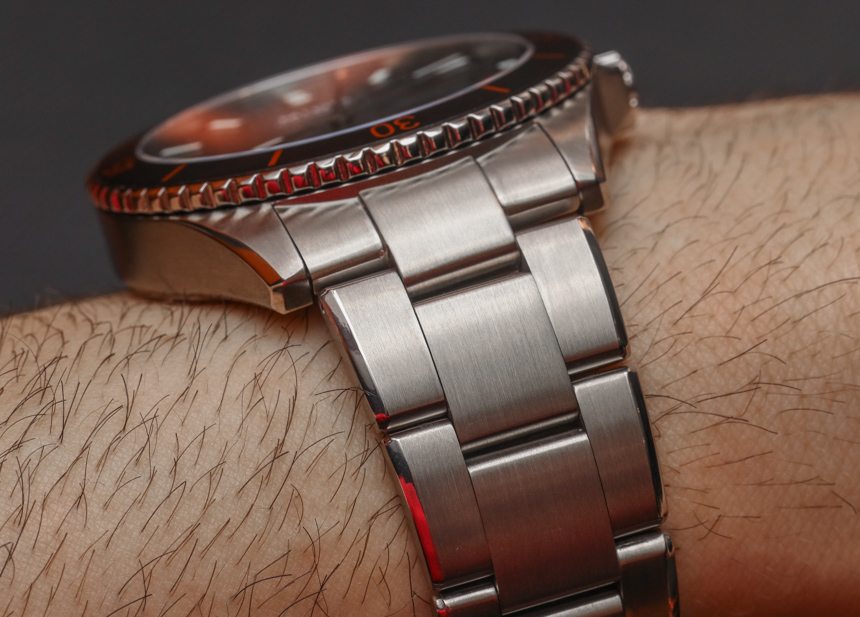 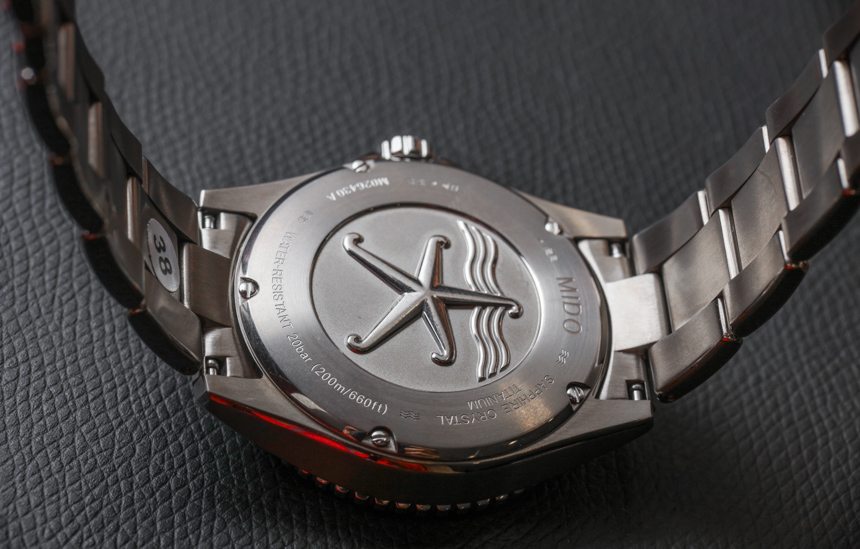 The cheesiest part of the Mido Ocean Star Captain V is the deep relief image of the sea star on the rear of the case. Its like amateur oceanographic art, but then again, I’ve seen much (much) worse watch caseback art. The case is water resistant to 200 meters with an AR-coated sapphire crystal over the dial. What’s actually quite nice about the case is how thin it is for a dive watch. Mido isn’t going to beat any records with the Mido Ocean Star Captain V’s case dimensions, but it wears slim on the wrist with a profile that can easily slip under shirts at probably under 11mm thick. 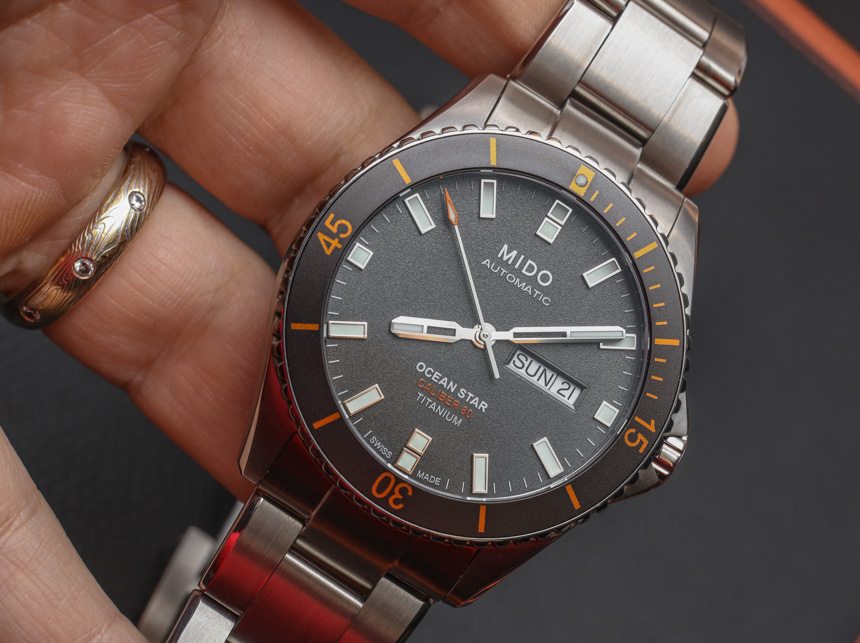 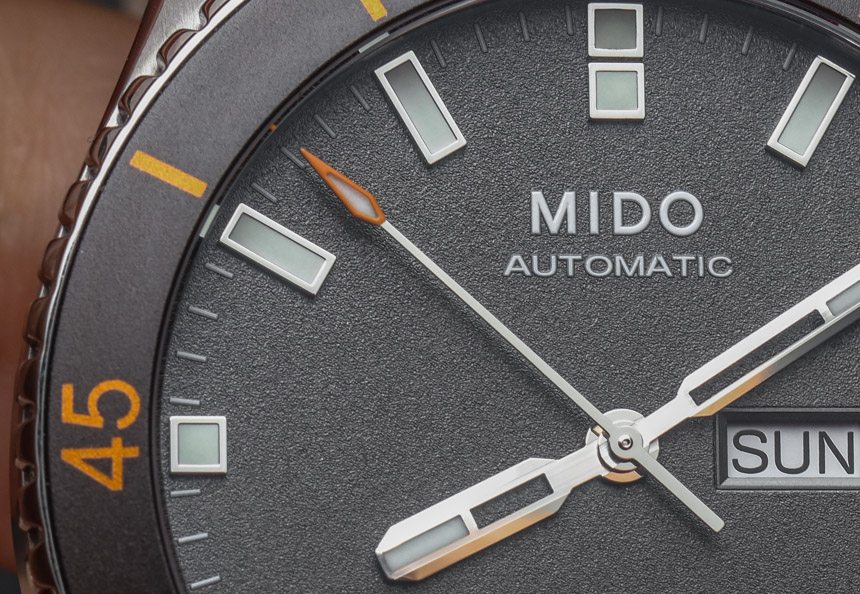 Neatly constructed with refined yet intentional angles, the Mido Ocean Star Captain V titanium case is 42.5mm wide, sitting really well on most wrists. The dial finishing is a great example of function and form offering a wise slew of matte surface finishes with only flat polished elements for the blocky hour indicator and modern sport watch-style hands. The hands don’t at all need to be skeletonized, but given the textured matte dial that is mostly sparse, there is no appreciable loss in legibility.

It would have been great for Mido to have a ceramic insert for the rotating diver’s style bezel, but the matte finished aluminum insert works well enough. To make it a “true” diver, Mido placed a lume pip at 12 o’clock. I’m glad that the lume is there, but the round dot oddly contrasts with the rectangular marker it is inserted into. Just a minor quirk, to be sure. 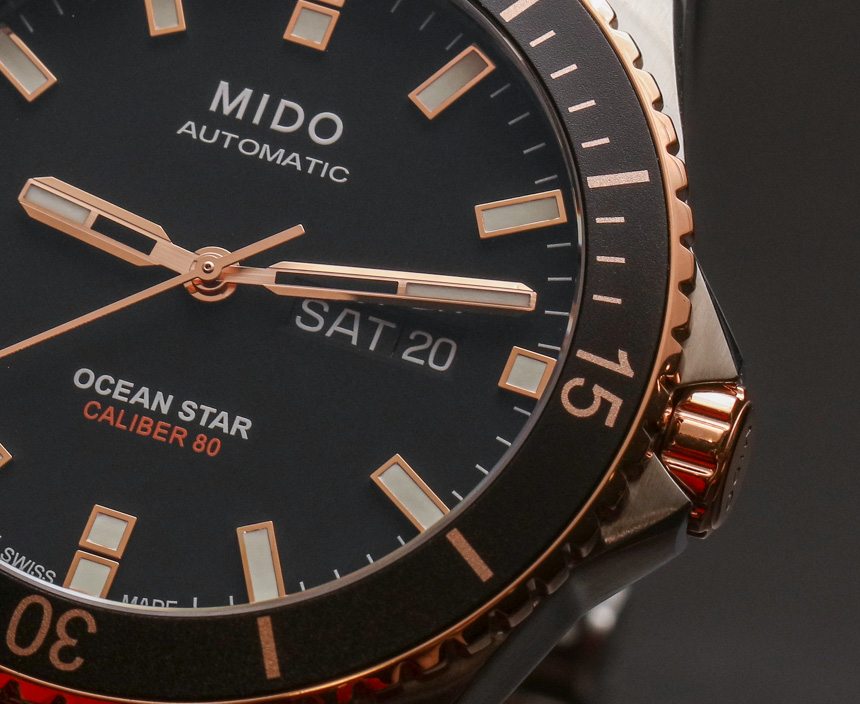 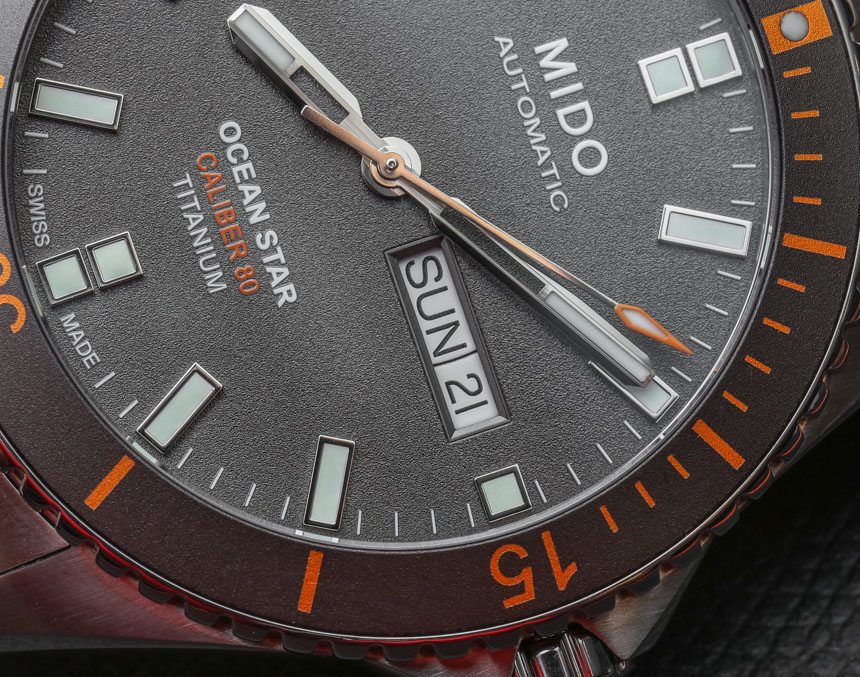 One of the reasons I like Mido sport watches in addition to their reasonable pricing is because they know how to make a dial that is both a little bit “different,” but still also classy and refined. Most consumers might not even really be able to define what makes the dial that much different from similar watches, but the distinctive character is for sure there. What Mido is doing really well is blending textures and shapes, along with colors, skillfully. 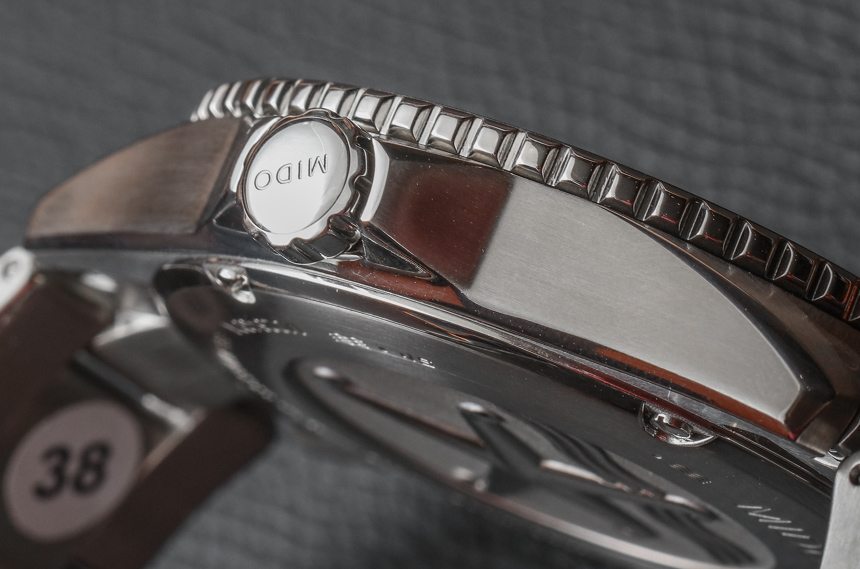 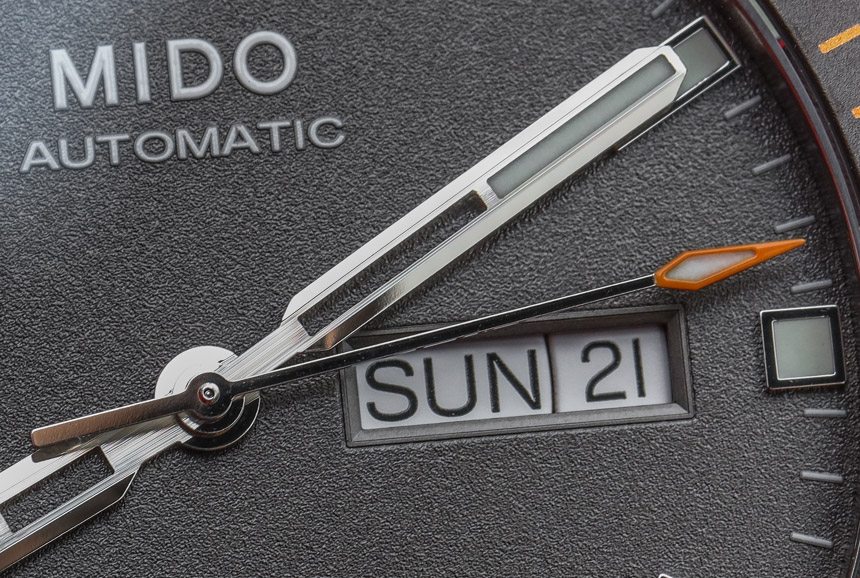 Inside the watch is Mido’s Caliber 80, which is built for them by ETA. What a lot of people don’t know (often because the Swatch Group brands like Mido, Longines, Hamilton, and Certina aren’t amazing at communicating this information) is that some of ETA’s most advanced movements are found in timepieces like this. The Caliber 80 is also known as the ETA C07.621, which was originally spawned from the 2824-2. The movement has a power reserve of 80 hours (other Swatch Group brands have their own versions like the Hamilton H-10 or Powermatic 80) and operates at 3Hz. (21,600 bph). Functions include the time, date, and day of the week. Yes, it is true that the reduced frequency of the movement (to 3Hz from 4Hz) accounts for it using less power and thus lasting longer – but that isn’t the whole story. There is even a version of the Caliber 80 which is COSC Chronometer certified.

The movement uses a Swatch Group-made Nivaflex NM mainspring, which helps improve power and efficiency, and friction is reduced in the movement in general to promote a higher level of performance. The movements can be fine adjusted, but are mostly done via laser in a sort of automated process. Swatch Group is really impressive when it comes to some of their rapid watch assembly and level of production while maintaining a high level of quality.

While you can’t see the Caliber 80 in the watch, it is also given a high “élaborée” level of decoration along with Geneva stripes and even blued steel screws. Mido apparently adjusts the watch in three positions when trying to get the accuracy right. It’s not the world’s most impressive Swiss mechanical movement, but it is a damn fine one in a timepiece costing only this much. 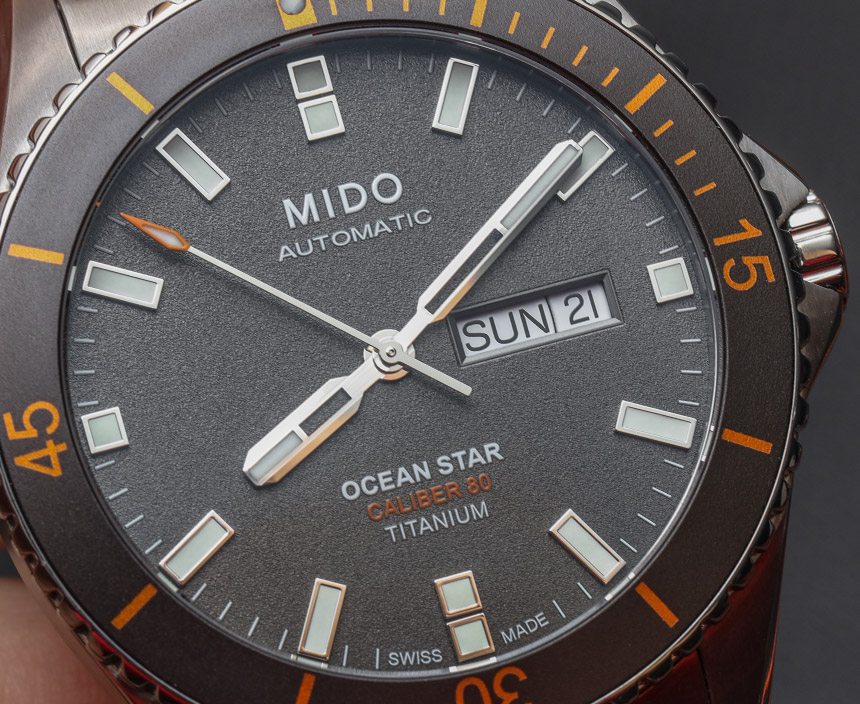 As a daily beater watch or slick-looking sports diving watch with some added style (and orange), the Mido Ocean Star Captain V titanium is a great option. It is lightweight, has a decent movement with a day/date complication that a lot of consumers want, it wears comfortably (and is hypoallergenic), and it doesn’t look half bad either. Retail price for this reference M026.430.44.061.00 Mido Ocean Star Captain V titanium watch is US$1,040. midowatch.com