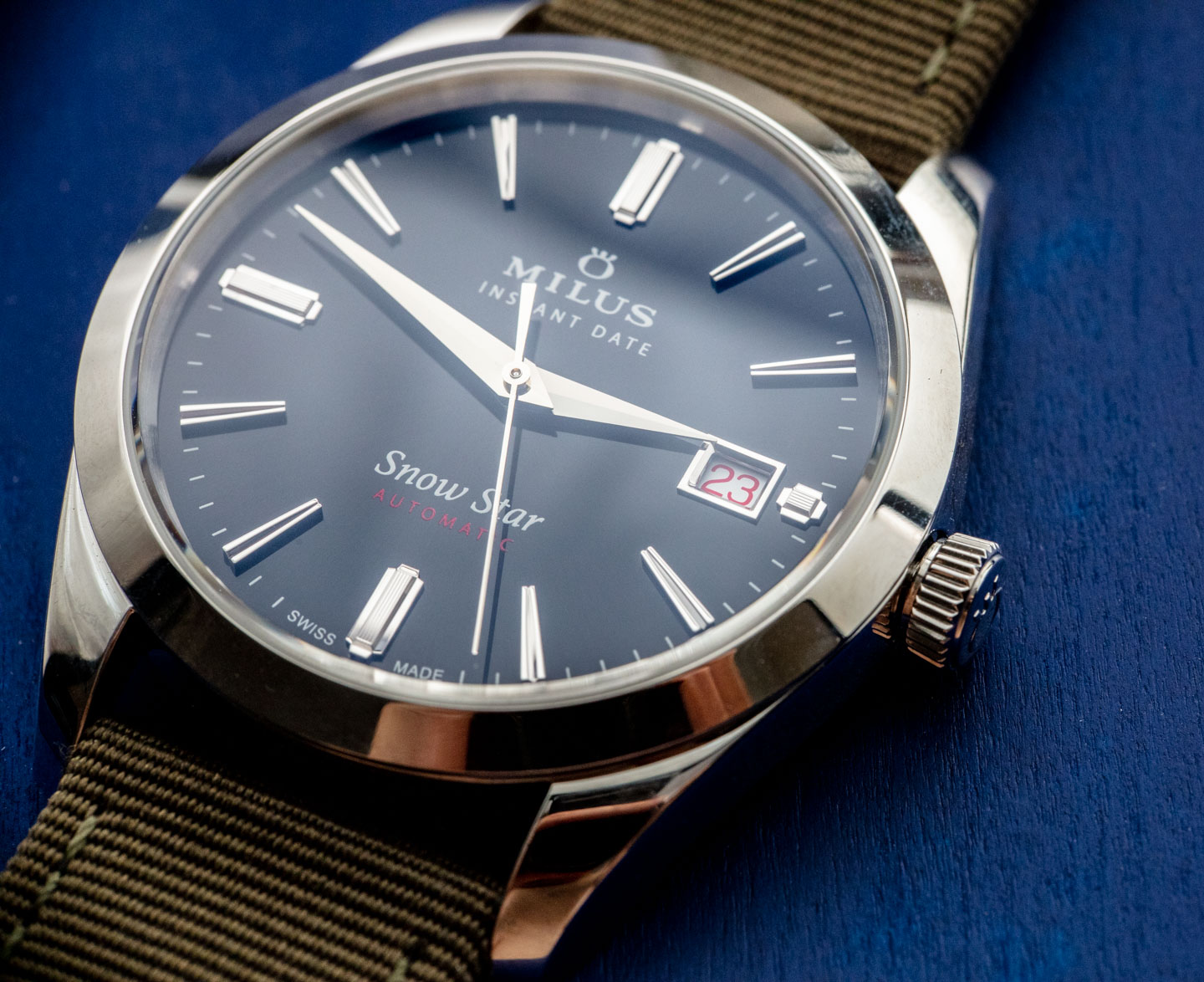 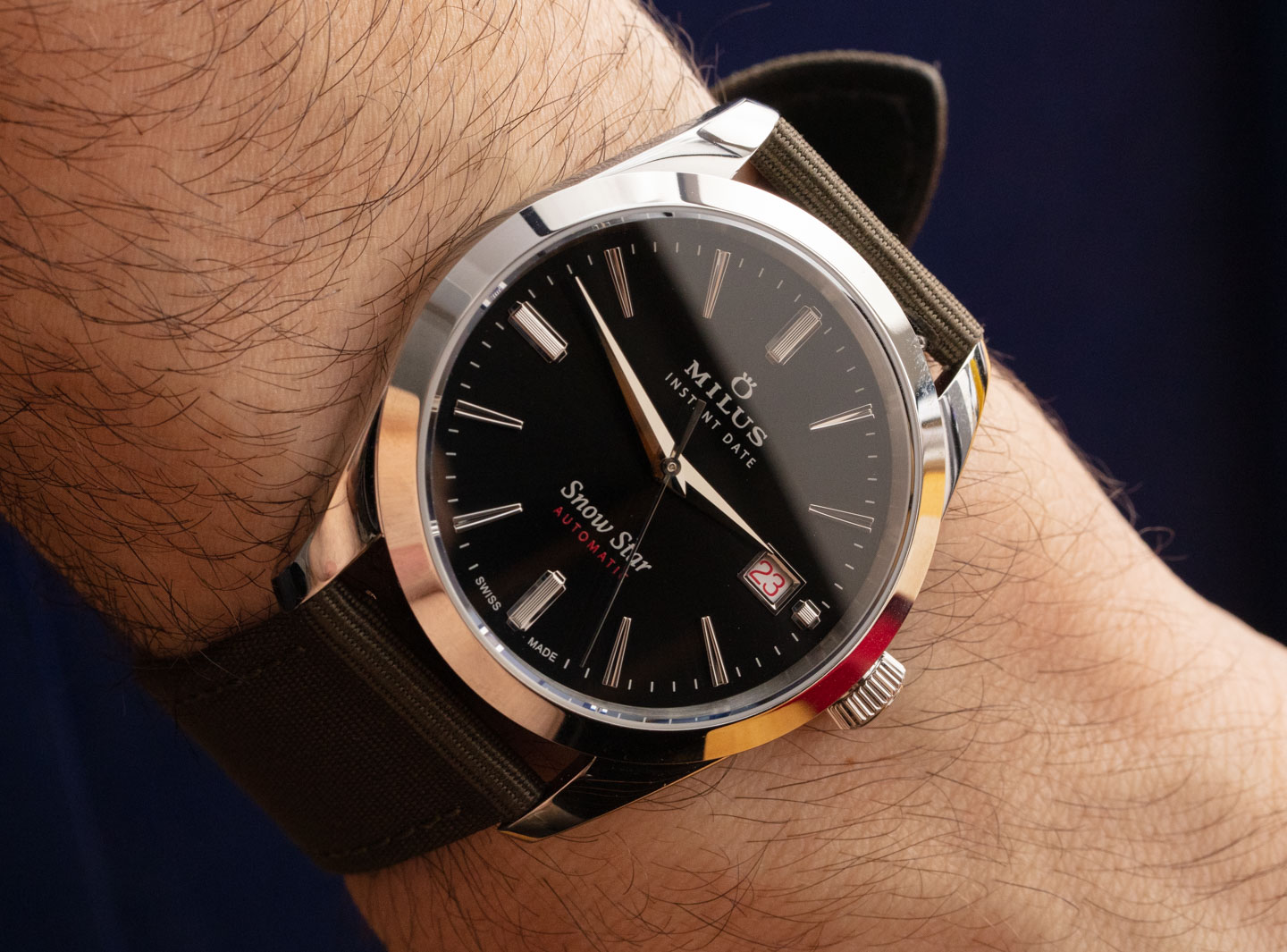 Classy and elegant (with watch-enthusiast wearers in mind), the Snow Star is a leading model currently produced by Swiss Milus. In this article, I go hands-on with the Milus “Snow Star Black,” the black-dialed variant of the Snow  Star which currently complements the Milus Snow Star Silver (aBlogtoWatch review here). Both of these watches are the same price and are, technically, identical. What separates the two current Snow Star models is the dial color and strap — but style-wise they, indeed, have two different personalities.

If you recall from the article about the Snow Star Silver, Milus believes a watch just like this was included in a “survival kit” the U.S. Navy used during World War II for pilots flying in the Pacific theater of war in Asia. While there is some question as to what precise Milus watch was featured in the kits, there is no question that Milus watches were part of a selection of jewelry that was intended to be sold or traded for help if a pilot landed in hostile or unfamiliar territory. Such a store is compelling and part of the brand’s history, and, for the purposes of this watch, can serve as pleasant icing on an otherwise tasty piece of horological cake. 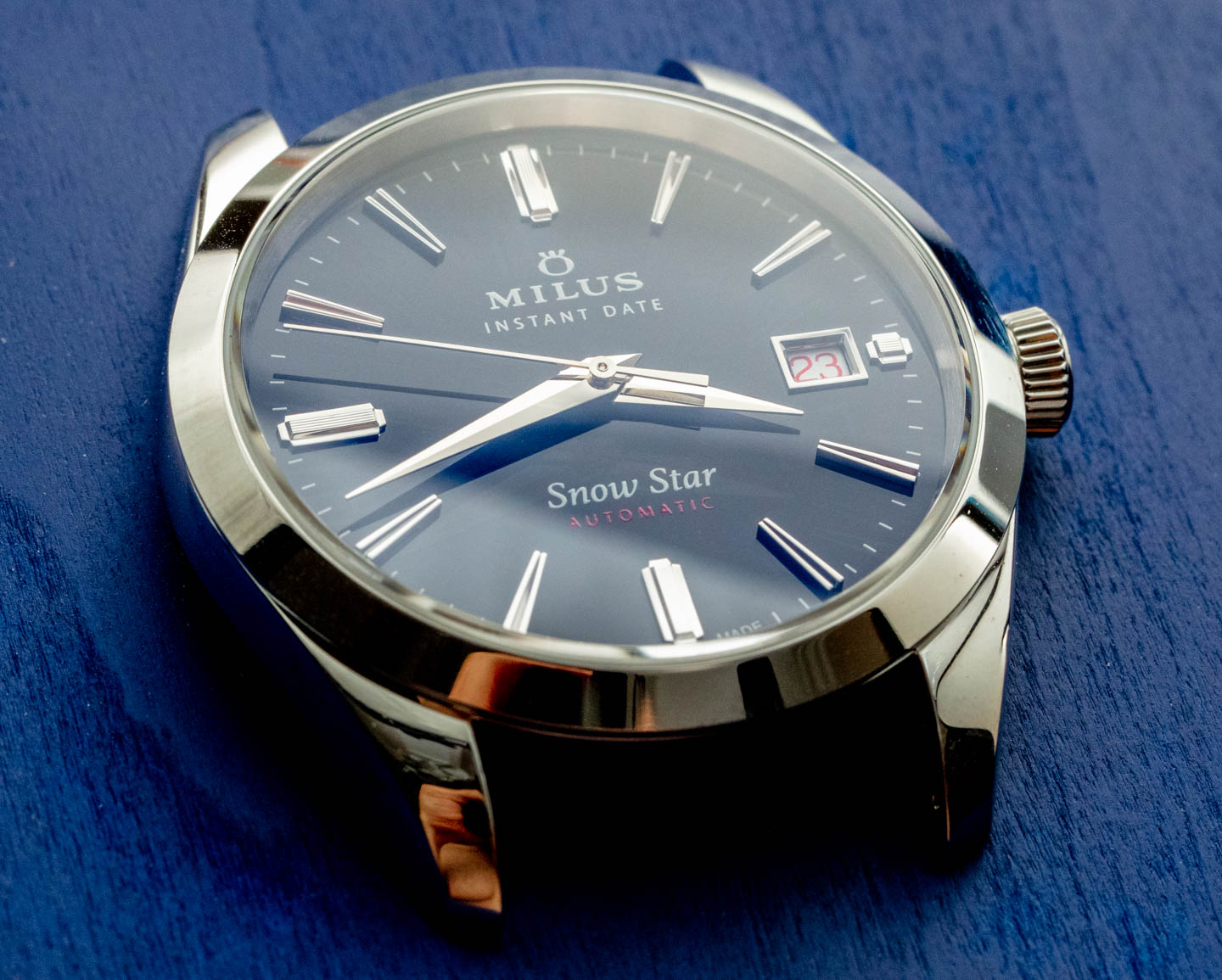 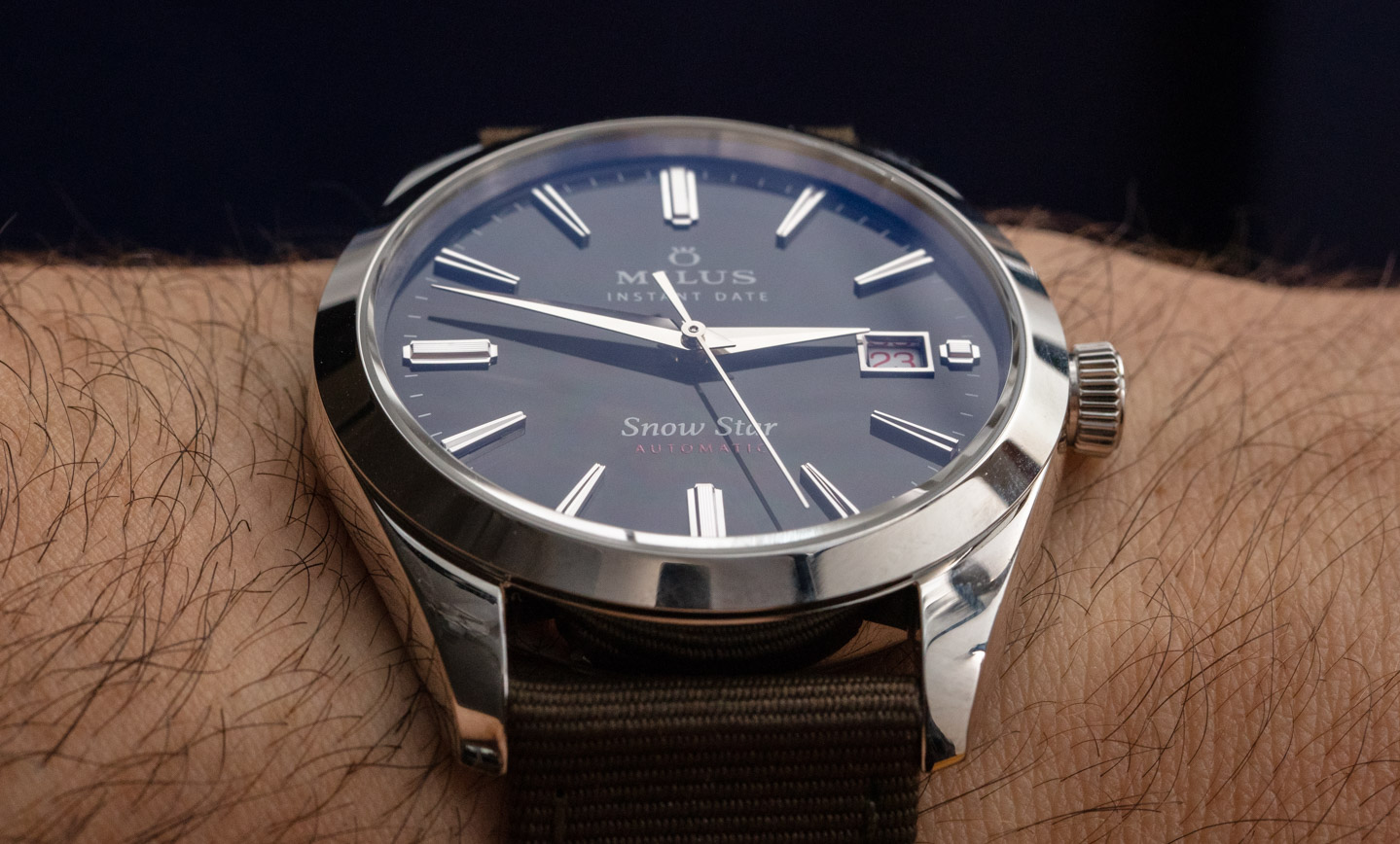 The brightly polished steel case has such a nice tone as it is in 904L steel (more or less the same as what Rolex uses), as opposed to the more common 316L stainless steel used on most other luxury timepieces. For the most part, people will not be able to tell the difference, but the trained eye can see how the Snow Star case has a bit nicer polish than one might typically expect from such a watch.

At 39mm-wide and relatively slim, the Snow Star Black has an effortlessly universal casual look to it. It isn’t so small as to feel retro, and it isn’t too large to not be considered a formal or dress watch. Milus likes to position the Snow Star as a retro-style daily-wear timepiece with a sporty appeal. This can be seen in the brand’s marketing, as well as the included military-toned olive-green fabric strap that comes with the watch. The strap is nice but not to everyone’s taste. It comes on quick-release bars, so anyone getting this watch should immediately think of what 20mm-wide strap they’d like to use on the Snow Star in order to personalize it for themselves. 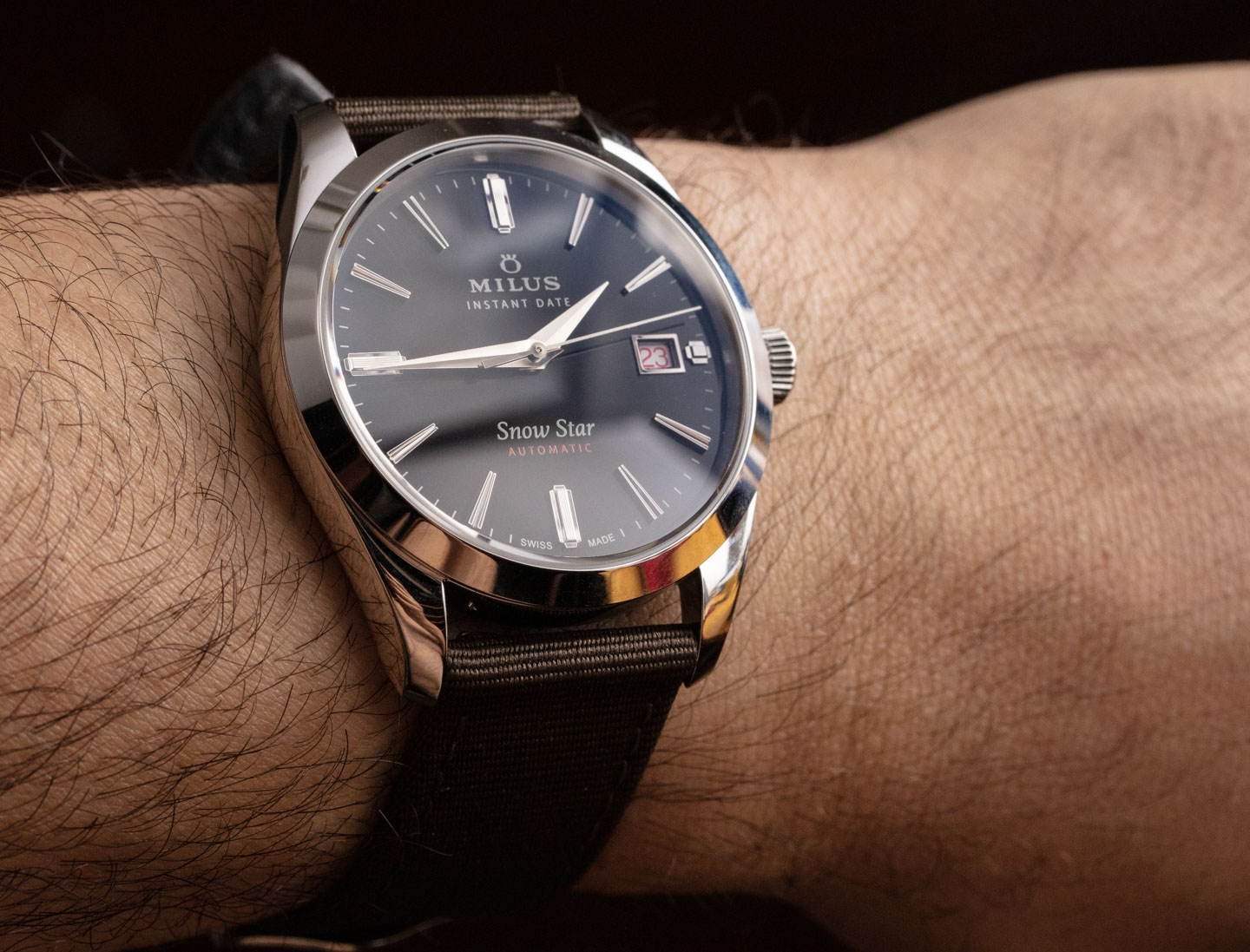 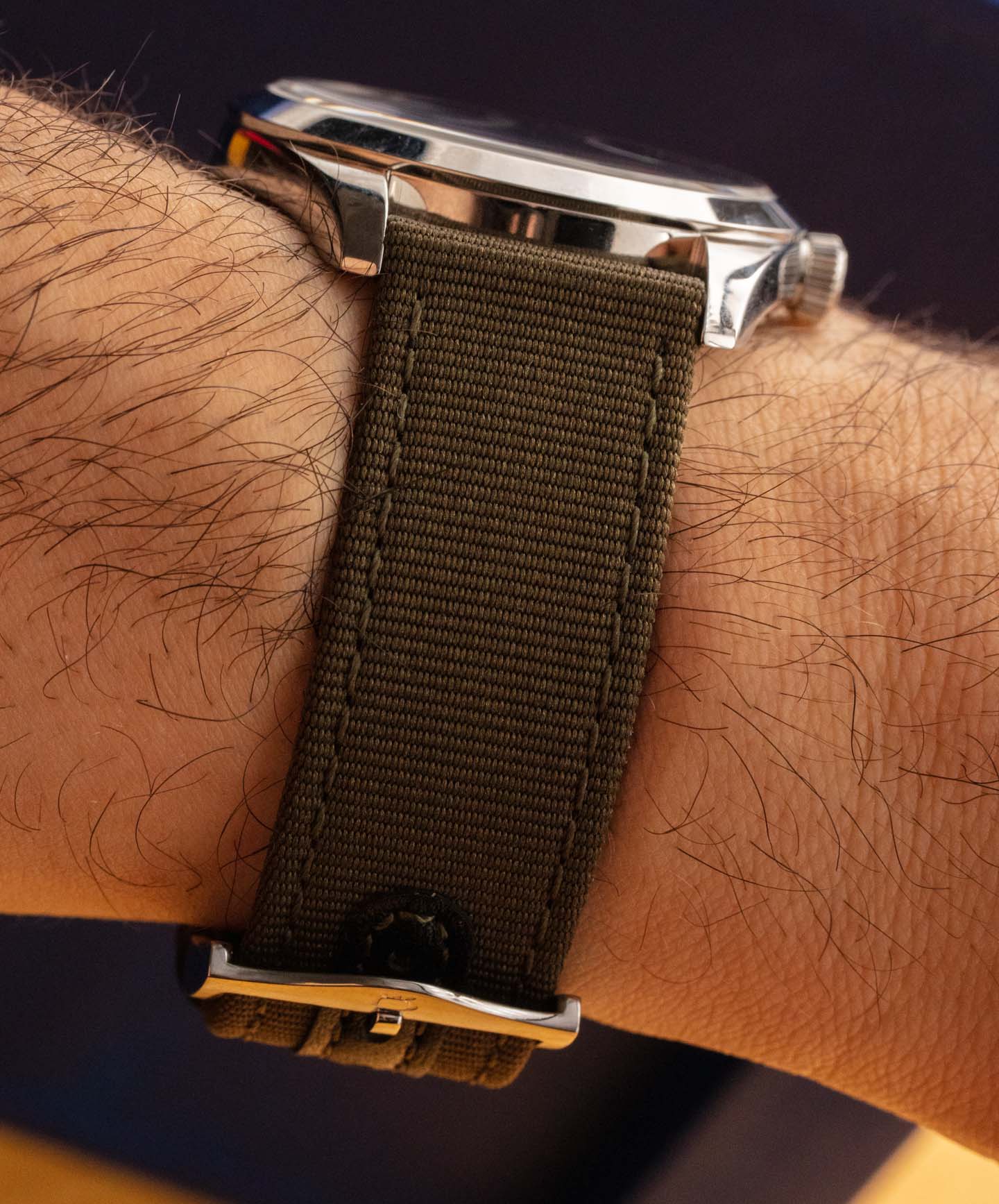 With a sort of 1960s dress watch aesthetic, the dial of the Snow Star works well as the masculine applied hour markers meld with the elegance of the dauphine-style hands (my favorite hand-design, probably). The Snow Star does lack luminant, so there isn’t going to be the ability to view it at night — but this is based on the dial’s dress watch origins. Speaking of legibility, the polished dauphine hands can blend into the dial a bit, though in most lighting conditions, it is fine. Style can win over substance at times, given that while there are some less than ideal legibility factors in the dial, the overall composition feels nicely composed and very attractive.

One-hundred meters of water resistance (with a screw-down crown) and an AR-coated sapphire crystal over the dial helps round-out the sportier side of the Snow Star. The caseback is relatively simple, and I would have liked to have an exhibition window with a view of the movement. That movement in question is the Swiss ETA 2892-2 automatic, which Milus uses for a lot of its current production. These are higher-quality than the 2824 automatics that have about two days of power reserve operating at a 4Hz frequency. According to Milus, they outfit each decorated (polished and with blued screws) 2892 movement with a custom skeletonized automatic rotor that has the Milus name cut into it. Again, it is a minor shame you can’t view the movement through the caseback. On the dial, the movement offers the time as well as the date via a window cut-out at the 3 o’clock indicator on the dial. The red-colored date numerals are a nice touch. 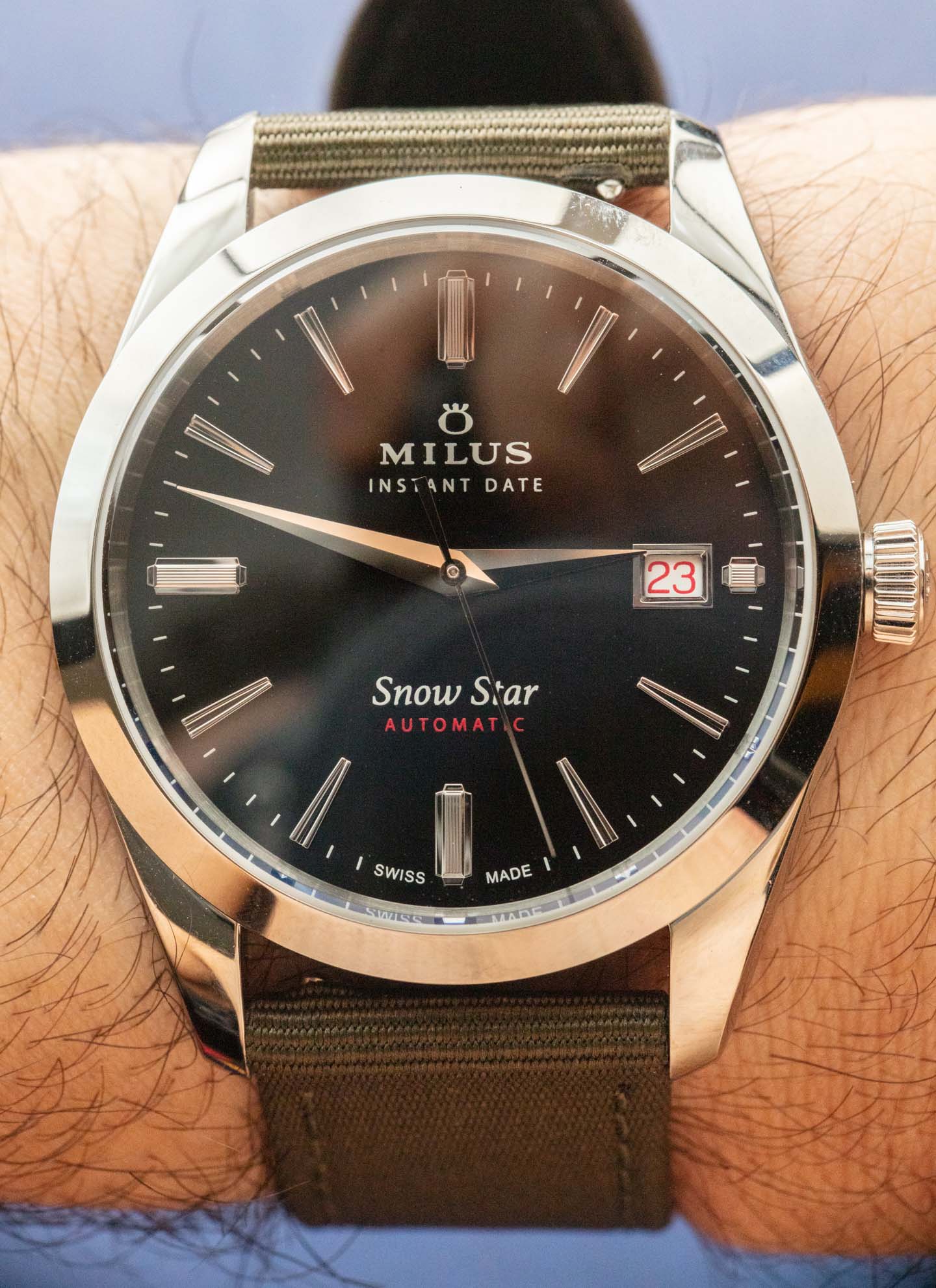 There are a lot of potential timepiece enthusiasts who would find a lot of joy in the Milus Snow Star. The good styling and theme alone are just part of the value proposition. While this isn’t the rock-bottom cheapest watch of its type around, I think for the movement, case materials, and overall packaging, the Snow Star feels value-priced in a lot of ways. Just start to think about what strap you’ll want to match it with to meet your lifestyle and personality needs. Price for the reference MIH.02.002 Snow Star Black watch is $1,800 USD. Learn more or order via the Milus website here.