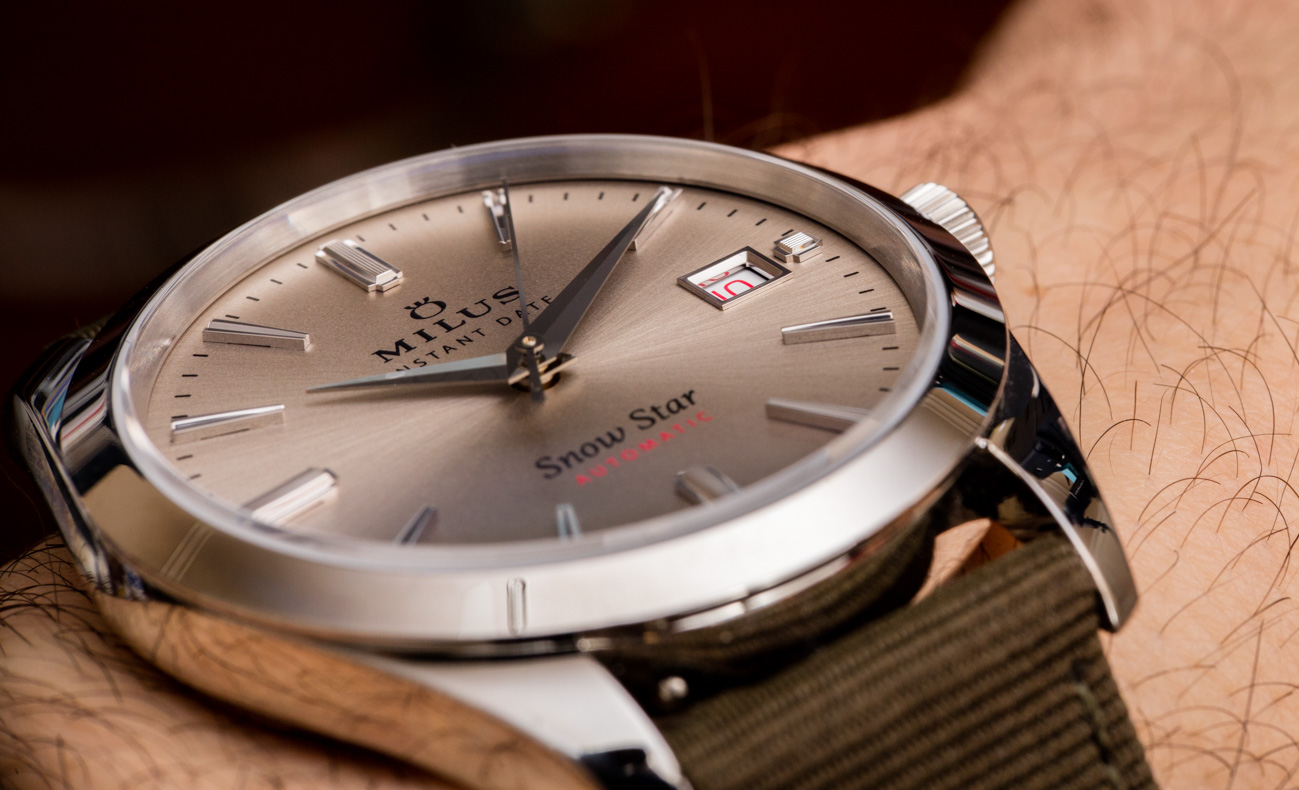 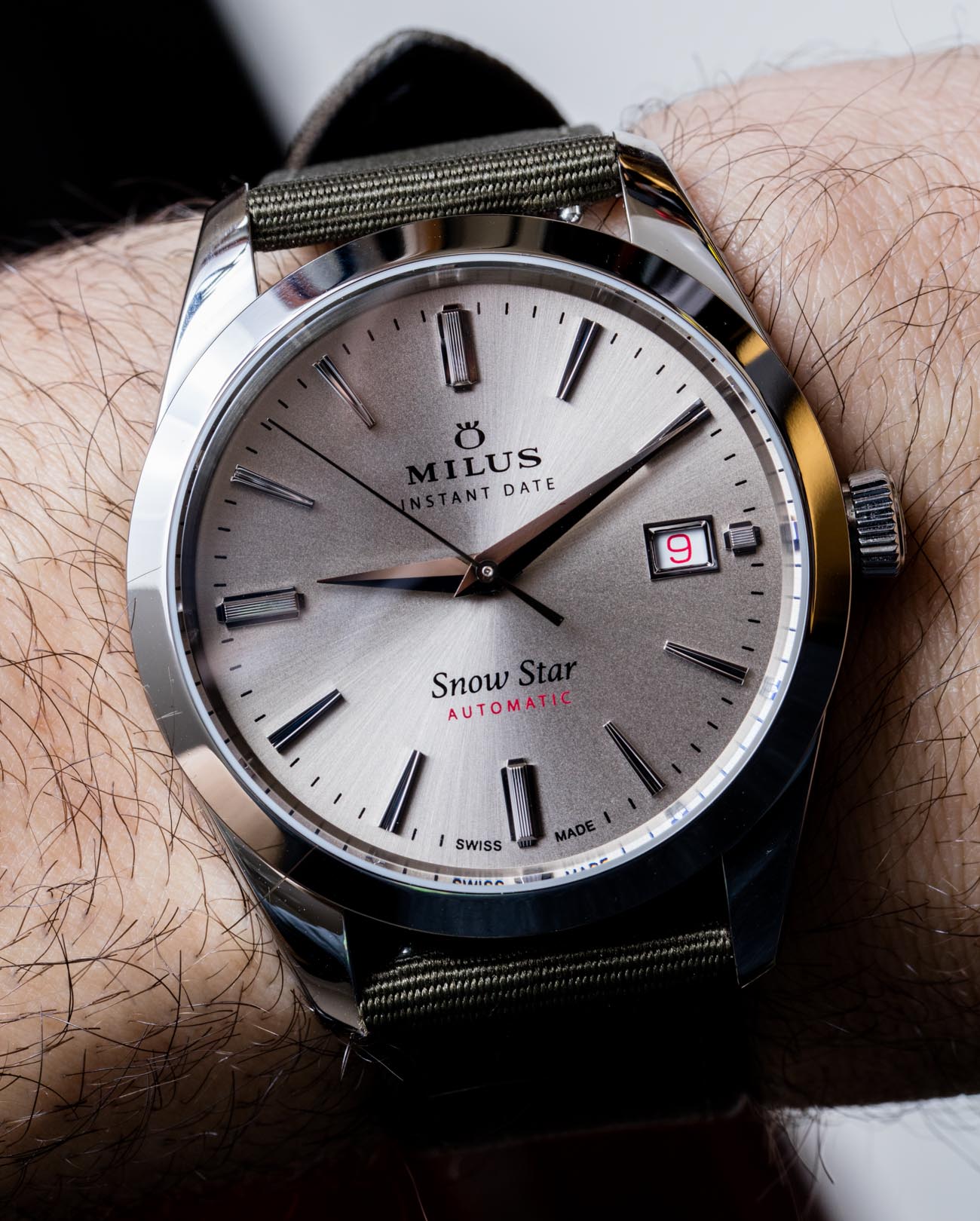 Circa 2019-2020, historic Swiss watchmaker Milus made a comeback — with some fresh concepts, as well as a smart re-make of the classic Milus Snow Star. In addition to being an attractive dress-style watch with good value that uses quality materials, the Snow Star has one of the coolest stories around. Today, Milus is actually owned by a member of the Tissot family — the same that sold the eponymous brand to the Swatch Group some years back.

Before talking about the latest Snow Star watch, just a bit about what Milus is all about today. In the early 2000s Milus, as a company, focused on higher-end watches that included complicated luxuries, each exceeding $100,000 in price. They also had a good collection under the “TriRetrograde” name that featured three retrograde hands on the dial for indicating the seconds. Those recent Milus watches are now “history” with today’s Milus focusing on practicality, classic design, value, and… Swissness. The brand itself is headquartered in Biel, where you’ll find most of the Swatch Group; it’s also where Rolex produces its movements, along with a host of other traditional watchmaking companies. 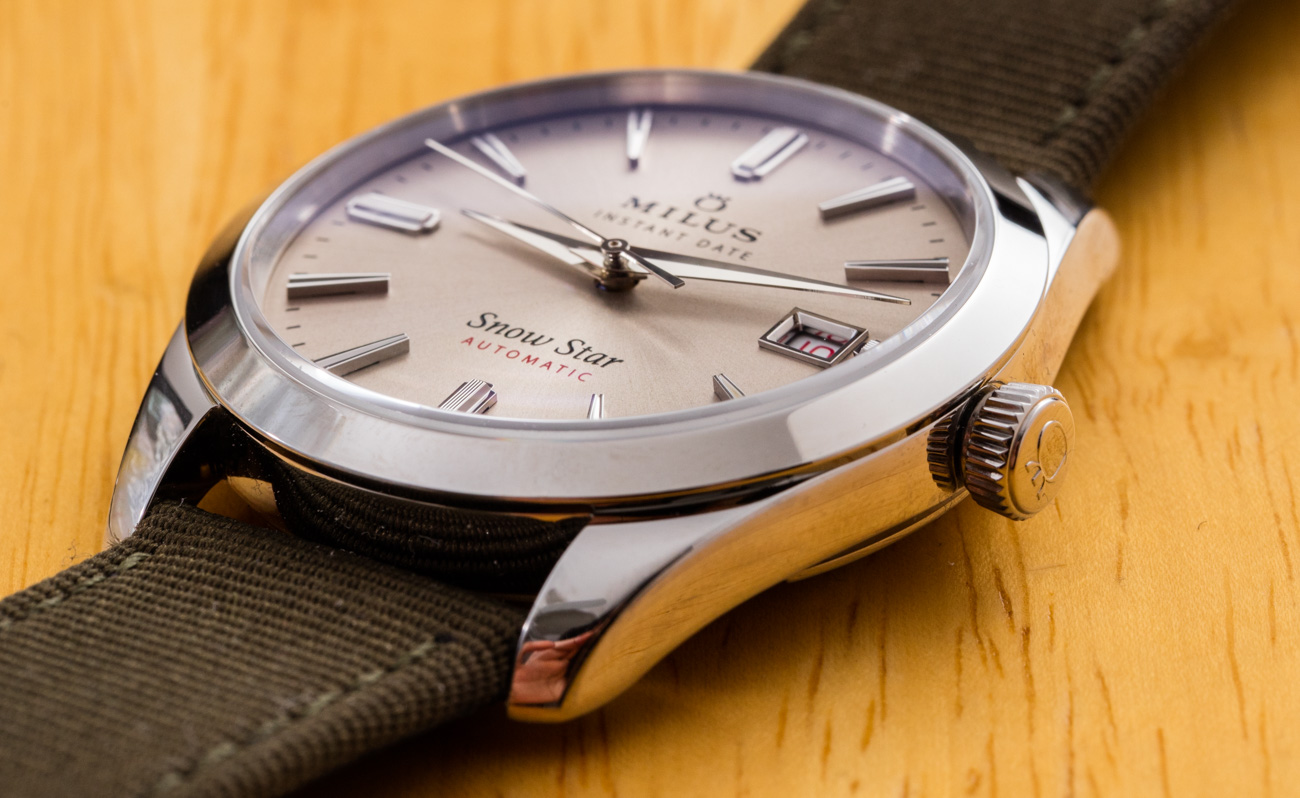 It is easy to enjoy today’s Milus Snow Star watch without understanding any of the collection’s history. I will discuss that neat story below toward the end of this article. The Snow Star is a very competent vintage-style dress watch that Milus suggests you wear in a sportier fashion, given the Khaki-style green or black straps that come with it. In fact, this silver dial Snow Star (reference MIH.02.001) normally comes paired with a black fabric and leather strap, but I decided to pair it with the olive-green strap that normally comes stock with the black dial (reference MIH.02.002). My recommendation for most wearers is to pair the Milus Snow Star with a NATO-style strap (I’m currently wearing the Snow Star on an elegant navy blue rubber NATO-style strap) or a more traditional formal strap, such as black or gray leather or alligator.

A key material selling point in the Snow Star is that Milus uses 904L steel, as opposed to the more common 316L steel, for the case. Why does that matter? Functionally, it really doesn’t, but 904L steel is the same alloy which Rolex uses (not they just called it OysterSteel) and it polishes up a bit nicer (in my opinion) that the more common but more or less functionally equivalent 316L steel. If your eyes can tell how the polish on 904L steel looks compared to 316L, then, congratulations — you are a nerd like me. For the most part, the 904L steel construction of the Snow Star will simply be a positive talking point when watch-lovers are trying to tell the story of why their Snow Star is a cool watch to wear. 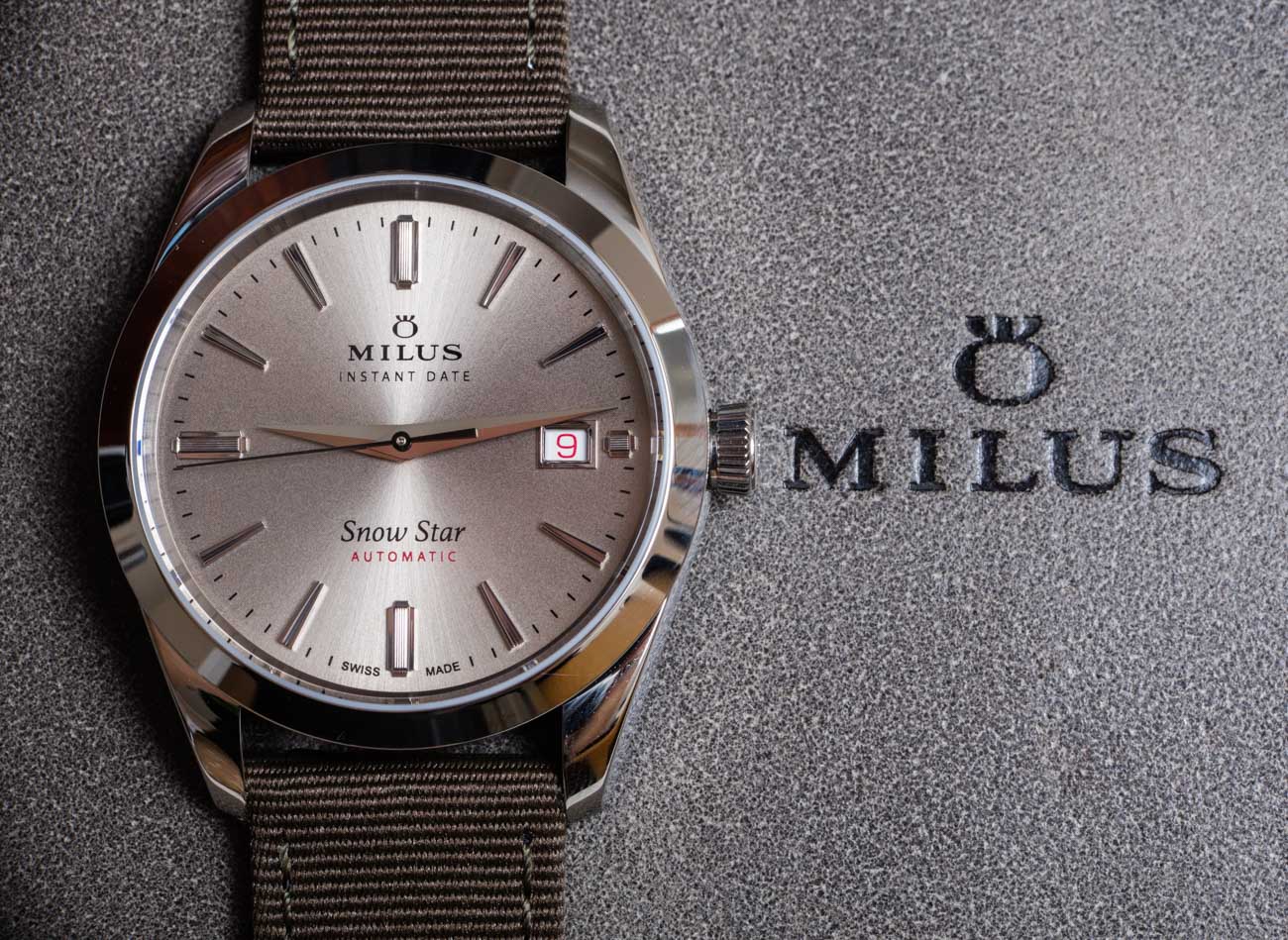 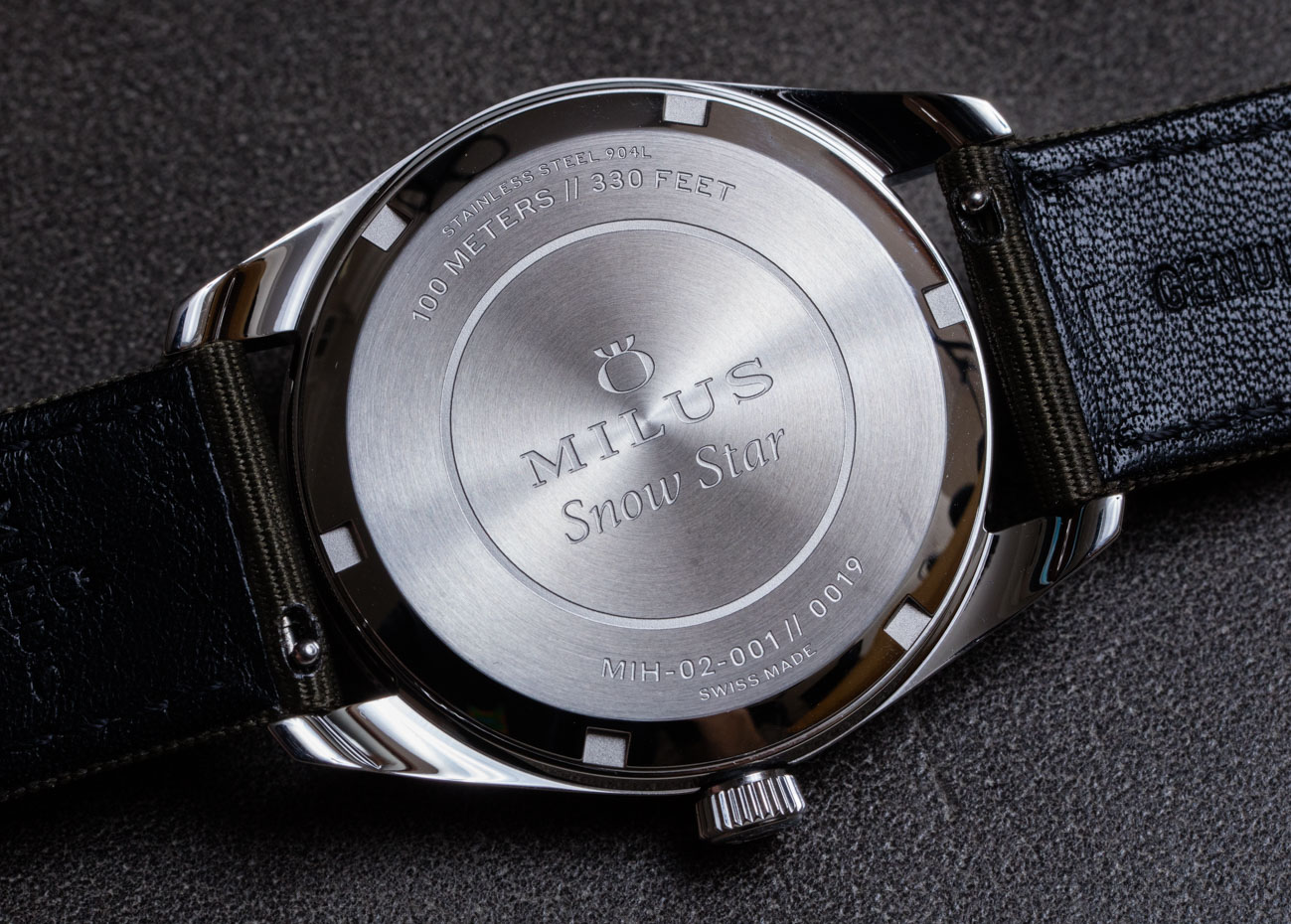 The case itself is 39mm-wide, about 10mm-thick, and has about a 46mm lug-to-lug distance, making it both slim and traditional on the wrist. The case has a screw-down crown, a slightly domed and AR-coated sapphire crystal, and 100 meters of water resistance. That’s not bad for a dressier watch. The entirely polished case looks quite handsome when combined with a military-style strap. Speaking of the strap, one small complaint is that when you wear the stock straps, you can see the small levers used for the quick-release spring bars. This shouldn’t be something that you can see with your eyes when wearing the watch. It is a good thing that Milus offers quick-release bars, but the way they are implemented makes it hard to look past the little metal nubs when it is on your wrist. Easy solution, though — just replace the strap.

Today, Milus offers the Snow Star with a silver or black dial. (It actually has some yellow hues to it, so it looks like “pale Champagne.”) I recommend the silver dial for two reasons. First, because the sunray-finished glossy black dial creates legibility issues when paired with the polished hands. Second, the silver dial represents what the historic Snow Star watch looked like. The dial features attractive dauphine-style hands and interesting applied hour markers that are a fun and slightly funky addition to an otherwise conservative package. No luminant here, but there is a date window with all red-colored numerals. The markings on the dial mostly refer to the historic Snow Star collection (where an instantly changing date was a big deal). Overall, the handsome and classic style of the Snow Star’s dial make it very fashionable, though not entirely distinctive. 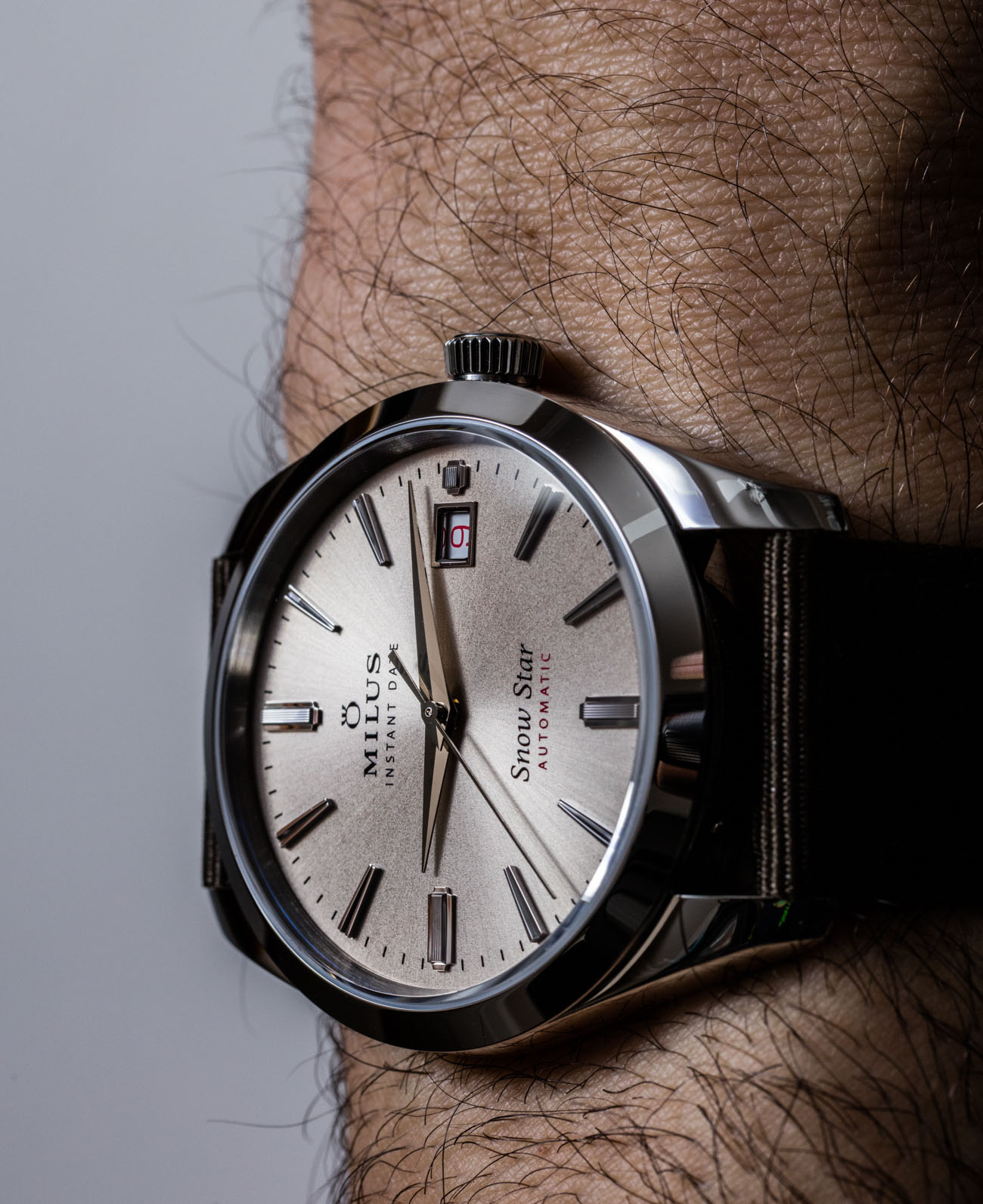 Inside the Snow Star is a “top-grade” Swiss Made ETA 2892A2 (2892) automatic movement, which is a thinner and higher-end cousin to the 2824. It operates at 4Hz with 42 hours of power reserve. This movement can be found in some less expensive watches, but is mostly found in more expensive watches. There is no display caseback, which would have been a nice (but probably not historically accurate) touch.

Above I mentioned that the original late 1930s/early 1940s Milus Snow Star had an interesting history. It isn’t clear when the Snow Star was originally released, but toward the middle of World War II, the watch found itself being used for an interesting purpose by the United States Navy. It was supplied to certain fighter or bomber pilots who were engaged in the Pacific theater of war. But the Snow Star was not assigned to them as their flight watch, so why did pilots have them? 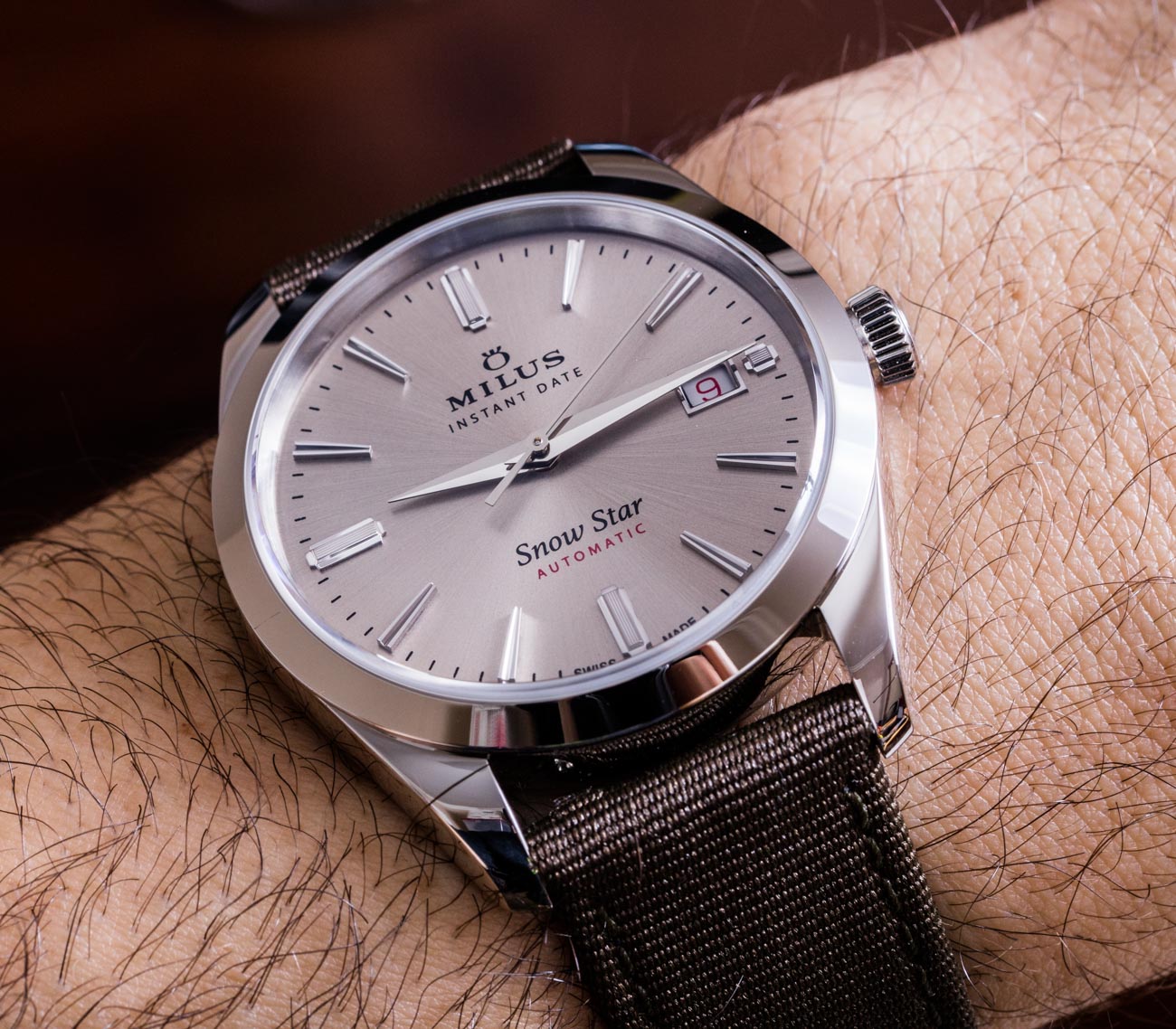 The interesting part of this story is that the contemporary Milus brand had to “relearn” the story below in the last 15 or 20 years. No one knows what the relationship between Milus and the U.S. Navy was in the 1930 or 1940s or why Snow Star watches were selected. According to Milus, only about three of the original kits with the Snow Star watches are known to exist, and they have one or two of them.

Certain U.S. Navy pilots flying in the Pacific toward to the middle and end of WWII (the same outfit that former President George H. Bush flew in) were given a small kit that they wore in their flight suits. It was ominously know as a “life barter kit.” The idea was to give a pilot whose plane was downed (and who survived) some insurance to keep them alive in hostile or neutral territory. A pilot in this situation would have parachuted out of their plane and be both vulnerable and lost wherever they landed.

Inside the life barter kit (as sort of monetary survival kit) was just a few items. First were two small gold rings. Next was a small segment of gold chain. Then, a small gold pendant. And fourth was a Milus Snow Star watch, along with a rolled-up black fabric strap. The idea that the watch was perceived to be valuable enough to trade for your life, information, or safe passage home is actually pretty interesting. You can wear a Milus Snow Star today and think to yourself, “Someone 80 years ago felt that this was nice enough to save your life. That’s pretty cool, actually, and even though the modern day Snow Star watches aren’t supplied as part of a “life barter kit,” the emotional connection to the idea of it being a “survival insurance policy” is a strong sentiment that I think will resonate well with timepiece collections. In any event, it offers a satisfying story attached to the watch that will certainly give the Snow Star far more personality when compared to other “vintage-style Swiss dress watches” that also exist out there.

A lot of the history of the Snow Star is lost, especially when it comes to its relationship with the U.S. Navy. Did the Navy commission Milus to make a watch for them? Did they purchase some watches at a local jeweler? The answers to these questions are not known, and may never be, but speculating about them is a part of the Snow Star watch experience, for sure. 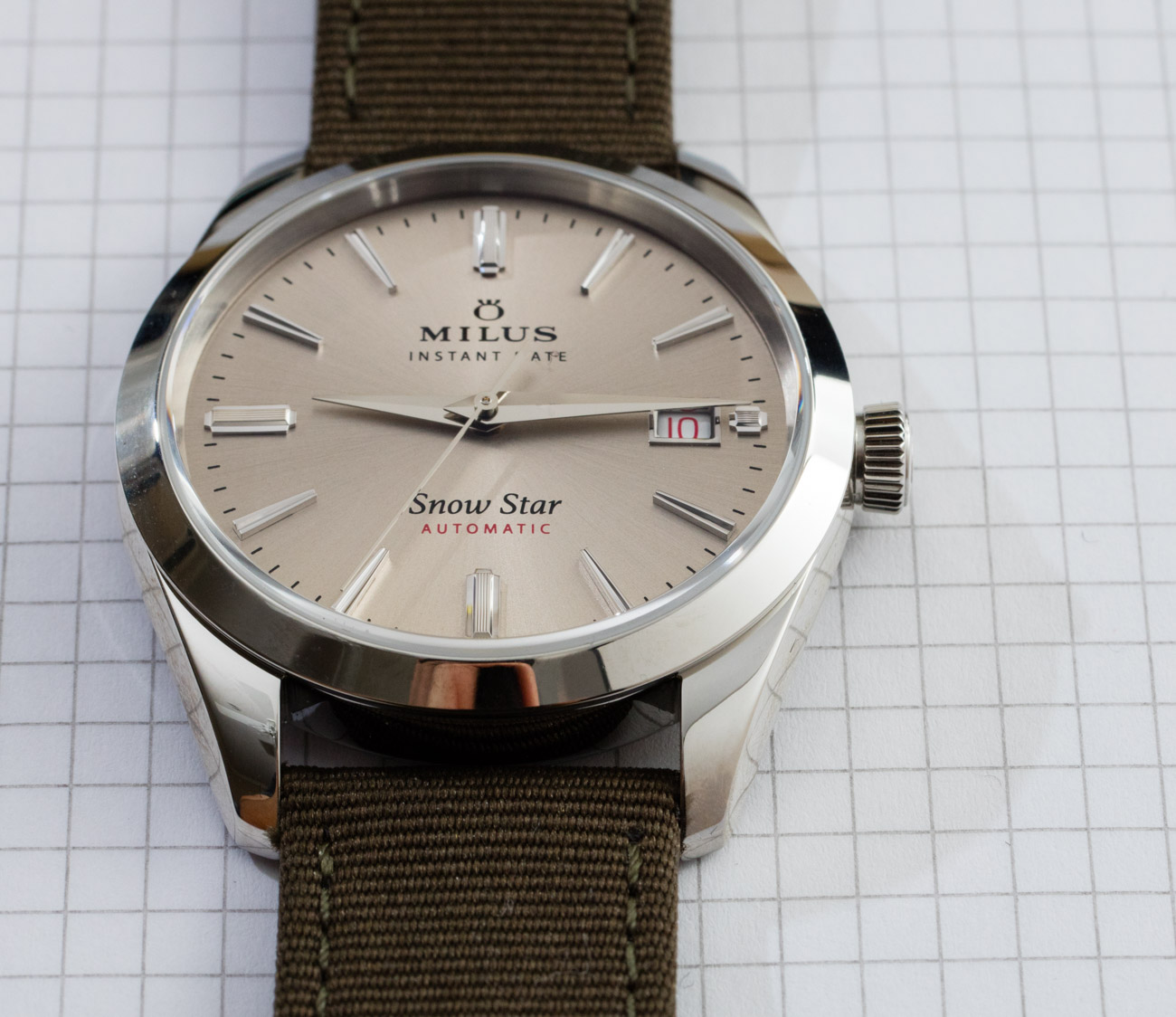 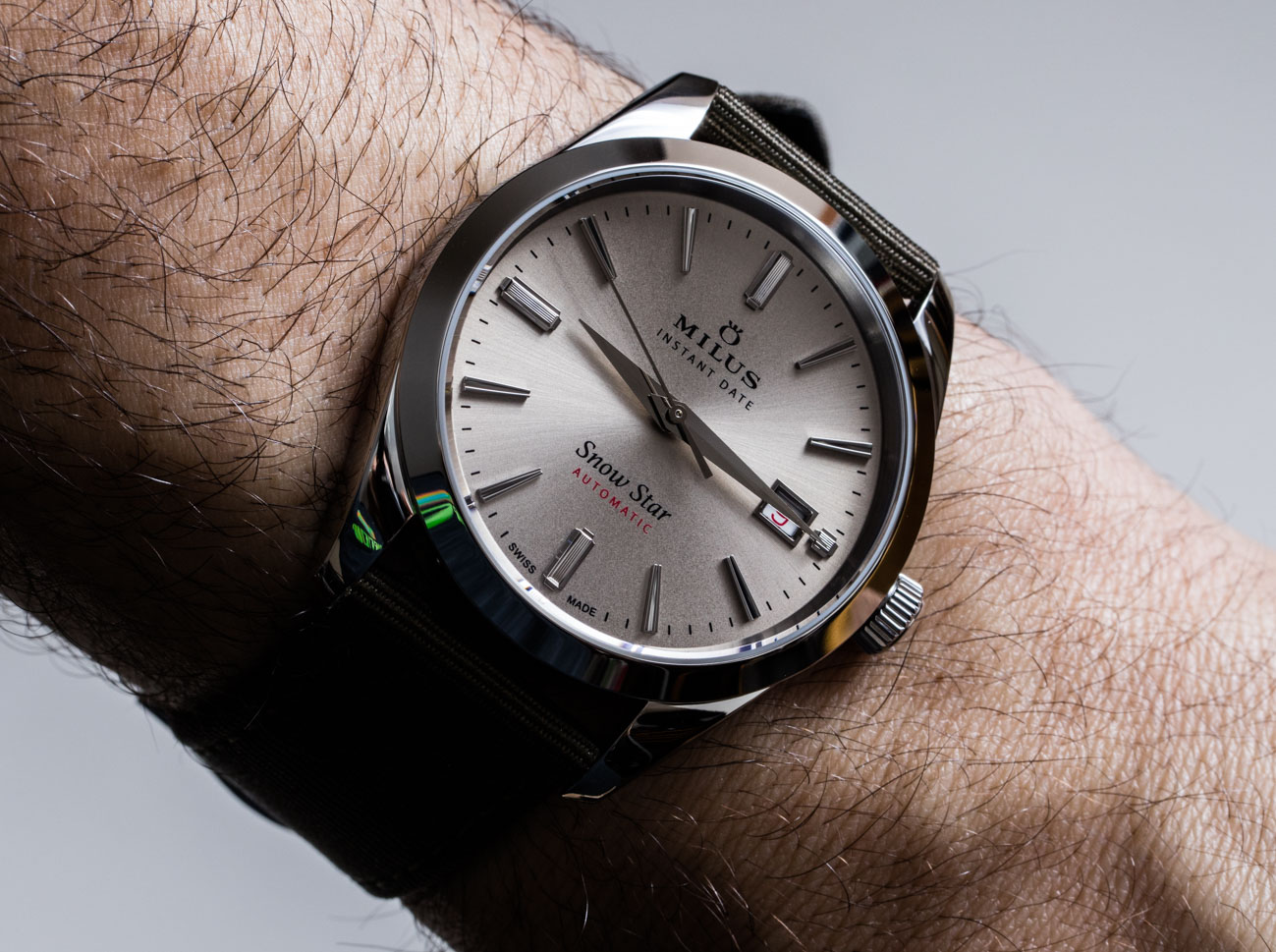 Milus, as a brand, is focusing on mostly direct-to-consumer sales at the current time. That means the Snow Star story will likely be one of the major reasons people come to the brand in the first place, and it would benefit Milus to create more emotional media and graphics related to this compelling story. You certainly don’t need to know the WWII story to appreciate the Snow Star, but it really helps keep interest in the product collection high. Otherwise, you can simply enjoy this timepiece as a well-made Swiss dress watch with a vintage character and thoroughly modern construction. Price for the Milus Snow Star watch is 1,690 Swiss Francs. Learn more at the Milus website here.

Necessary Data
>Brand: Milus
>Model: Snow Star (reference MIH.02.001 as tested)
>Price: 1,690 Swiss Francs
>Size: 39mm-wide, ~10mm thick, and ~46mm lug-to-lug distance
>When reviewer would personally wear it: As a classy looking casual timepiece when paired with a NATO-style or other “military” strap.
>Friend we’d recommend it to first: Conservative watch-lover seeking a timepiece of this flavor that comes with an particularly interesting story.
>Best characteristic of watch: Attractive vintage-style design with impressive historic story packed into a well-made modern case that comes at a relatively fair price.
>Worst characteristic of watch: Milus could do a better job of promoting the core historic story of the watch. Black dial version has poor legibility due to all-polished hands. Stock straps have quick-release bar whose hardware you can too easily look at while wearing the watch on your wrist.