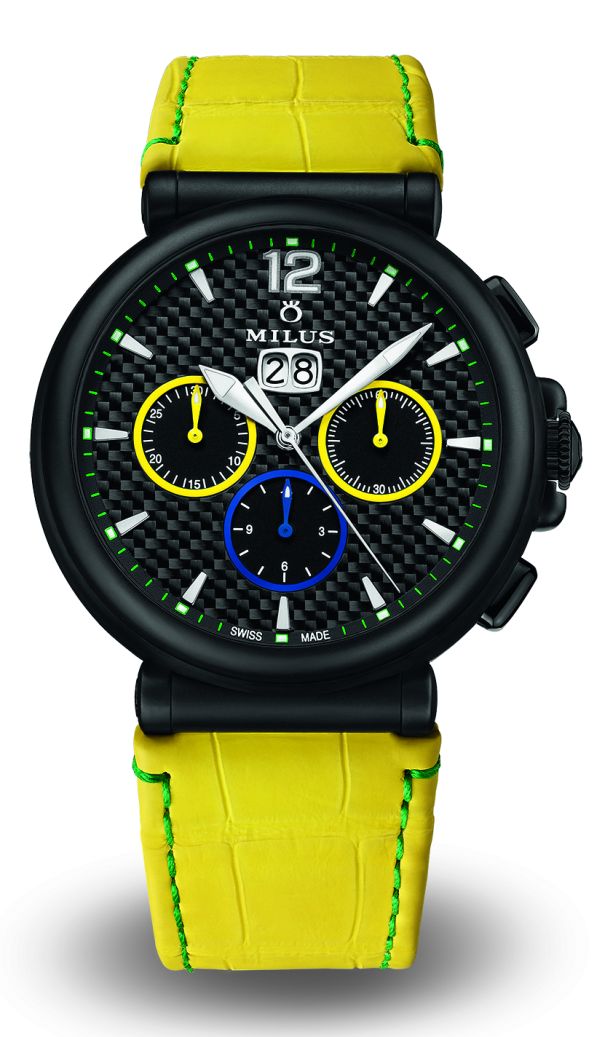 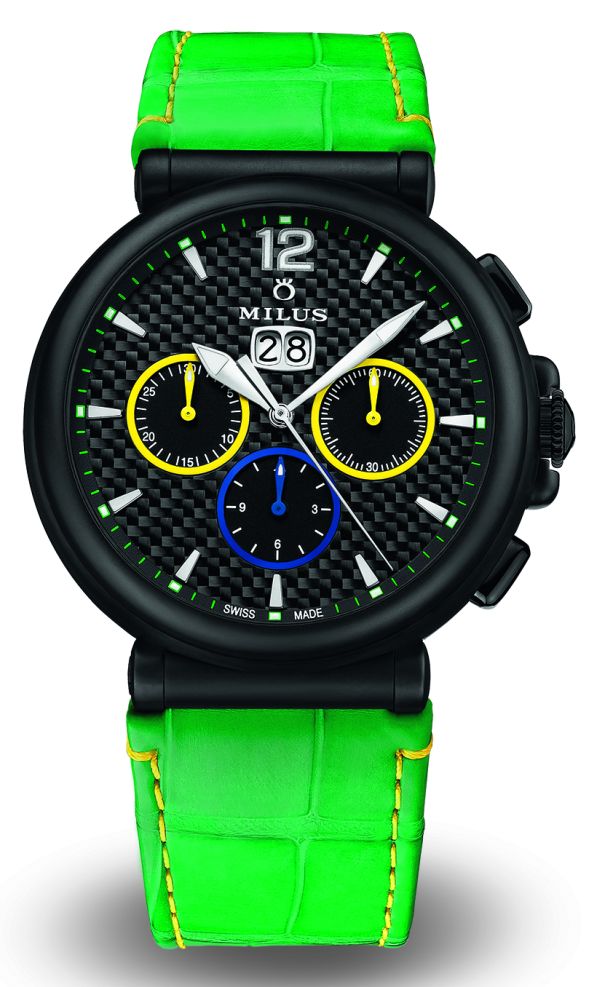 We often see sports stars endorsing watch brands (as ambassadors), or specific models (within advertising). It’s something a bit more on the rare side for a brand to create an edition in honor of a specific athlete – but that’s exactly what Milus has done.

The athlete in question is the footballer Roberto Carlos (wiki), who retired from the sport just last year. Starting with their Zetios Chronograph, Milus has incorporated, in a subtle manner, the colors of the Brazilian flag. And it’s a welcome bit of color, set as it is against a carbon fiber dial and 45mm DLC-coated case.

Set within the CF dial, you of course have the chronograph and small seconds subdials. The 30-minute chrono and small seconds registers are encircled in yellow, while the 12-hour register features a blue circle; all three sport color-matched hands. Rounding out the accent colors of the flag on the dial, you’ve got green appearing on the chapter ring to mark out the minutes. 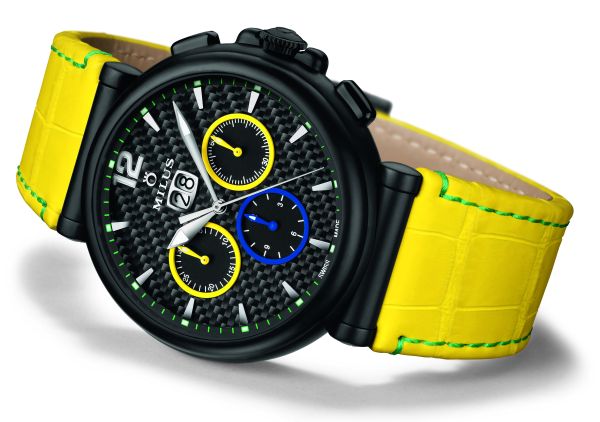 Depending on which of the three editions you want to look at, other colors come in via the alligator strap – either black, green (with yellow stitching), or yellow (with green stitching). And that is the extent of this edition – only three examples, one of which is committed to Mr. Carlos himself. Why the number three? Fittingly, it’s the number that Mr. Carlos wore on his jersey.

The watch, while simply styled, is cleanly put together, and looks to be easy to read. I’ve also become a big fan of CF dials, as they add quite a bit of dimensionality to the dial (look closely at one if you have a chance – indices and numerals appear to be floating over the dial). If the watch was all show and no go, though, wouldn’t be worth taking a look at, would it? 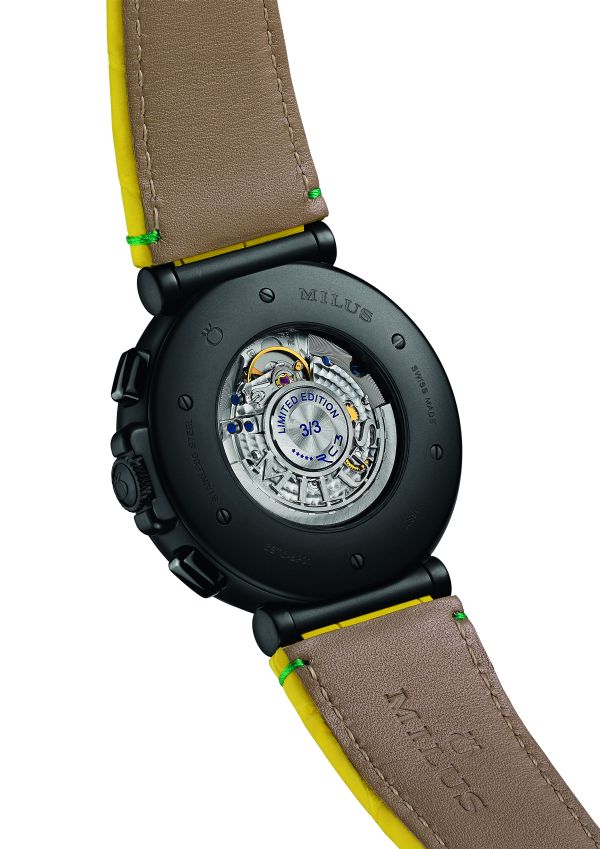 Fortunately for us, the Zetios lineup (on which this edition is based, if you recall) has the technical chops to match the design. Tucked away within the case you have a DD 4500 automatic mechanical movement with a 40-hour power reserve, which drives the aforementioned chronograph, as well as the large date display. On top of the case you have a curved sapphire crystal; around back you’ve got a flat sapphire set into the screwed-in case back. Lume is present on the dial and hands (apologies, we weren’t able to locate a lume picture), and you do have a limited bit of water resistance (rated at 30m, so don’t go swimming with this one).

With any extremely limited edition, such as this ZCRC3, talk of pricing is a fairly moot point – the watch is going to be scarce, and pricing will be set accordingly. We can, however, talk about the base model this watch came from, which is in the low to mid four figure range. The base model is also a much more refined (in appearance) watch, with dressier tones and finishes.  If anything, this LE may point to some sportier models that could be realized. 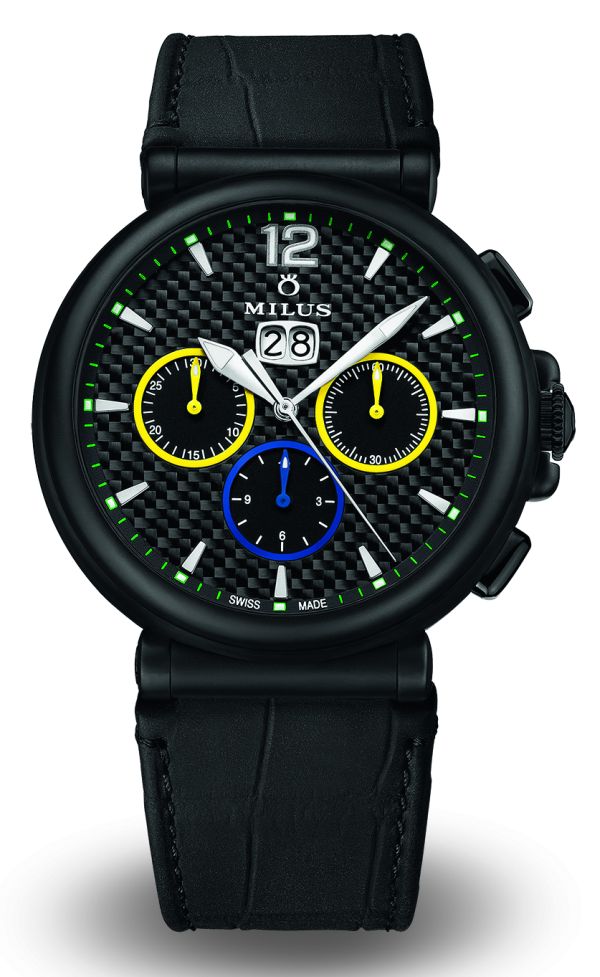 In the end, exercises like this (which are primarily styling) don’t generally get us as excited as the technical innovations that we’ve seen in other models. That aside, there is something to be said for these experimental treatments, as you can see how something as minor as adjusting colors can change the character of a watch. If nothing else, it can give you some food for thought on changes you might want to try on something in your own collection, be it a new strap, or something as extreme as dial swaps and case refinishing.  milus.com