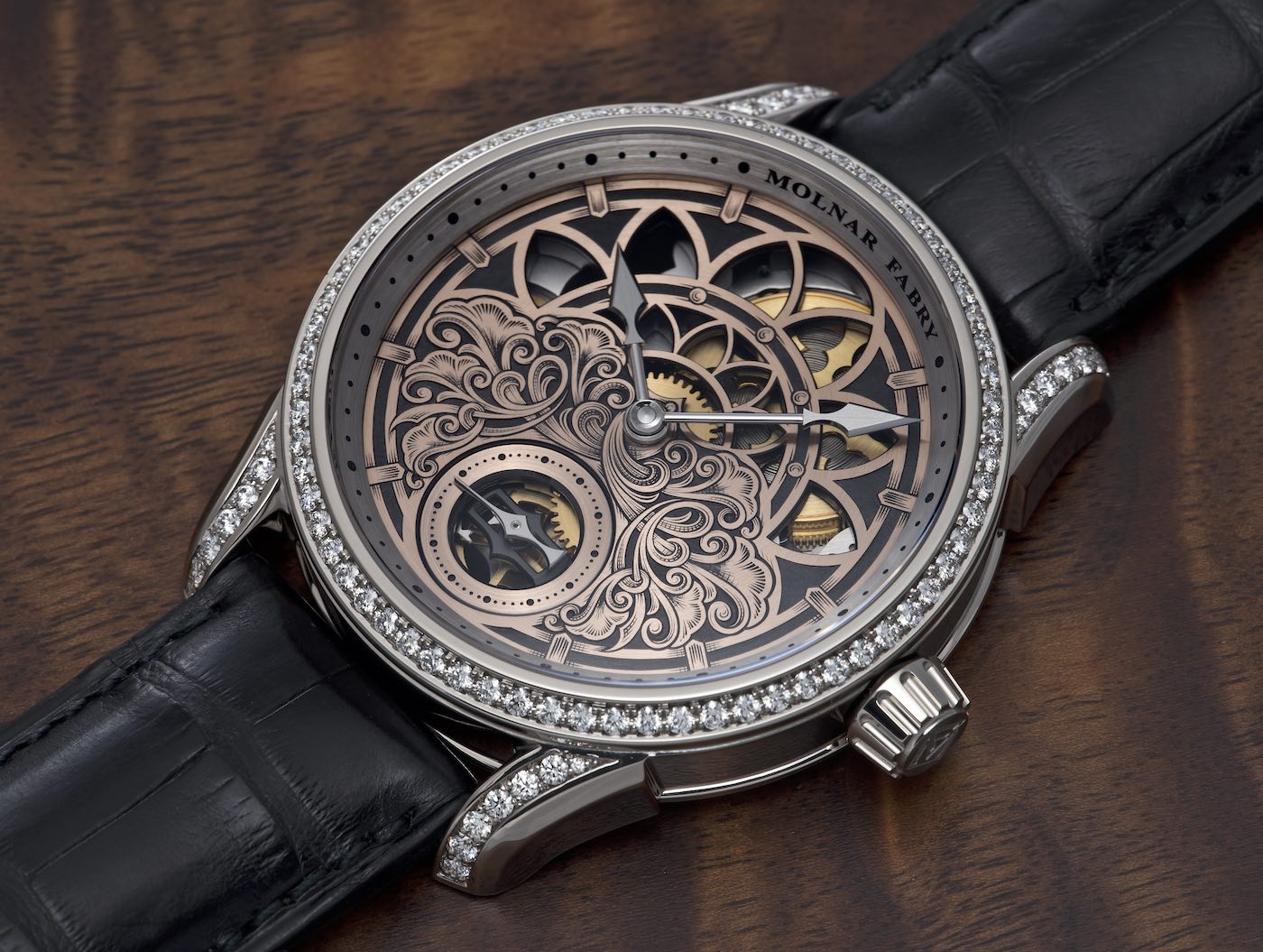 Nestled away in Banská Bystrica, Slovakia, Molnár Fábry is writing an intriguing chapter in the history of Slovakian watchmaking. While Molnár Fábry, founded by duo Michal Molnár and Igor Fábry, is not the only watch brand in Slovakia, it is very much carving a niche for itself. Both Molnár and Fábry began their careers in the luxury realm as trained jewelers, graduating from their studies in 1998. After meeting in 2002 they began working together in their shared field until their mutual love of timepieces encouraged them to start building toward their dream of owning their own brand in 2006. Now, their brand focuses on creating unique timepieces grounded in the craftsmanship of Haute Joaillerie. 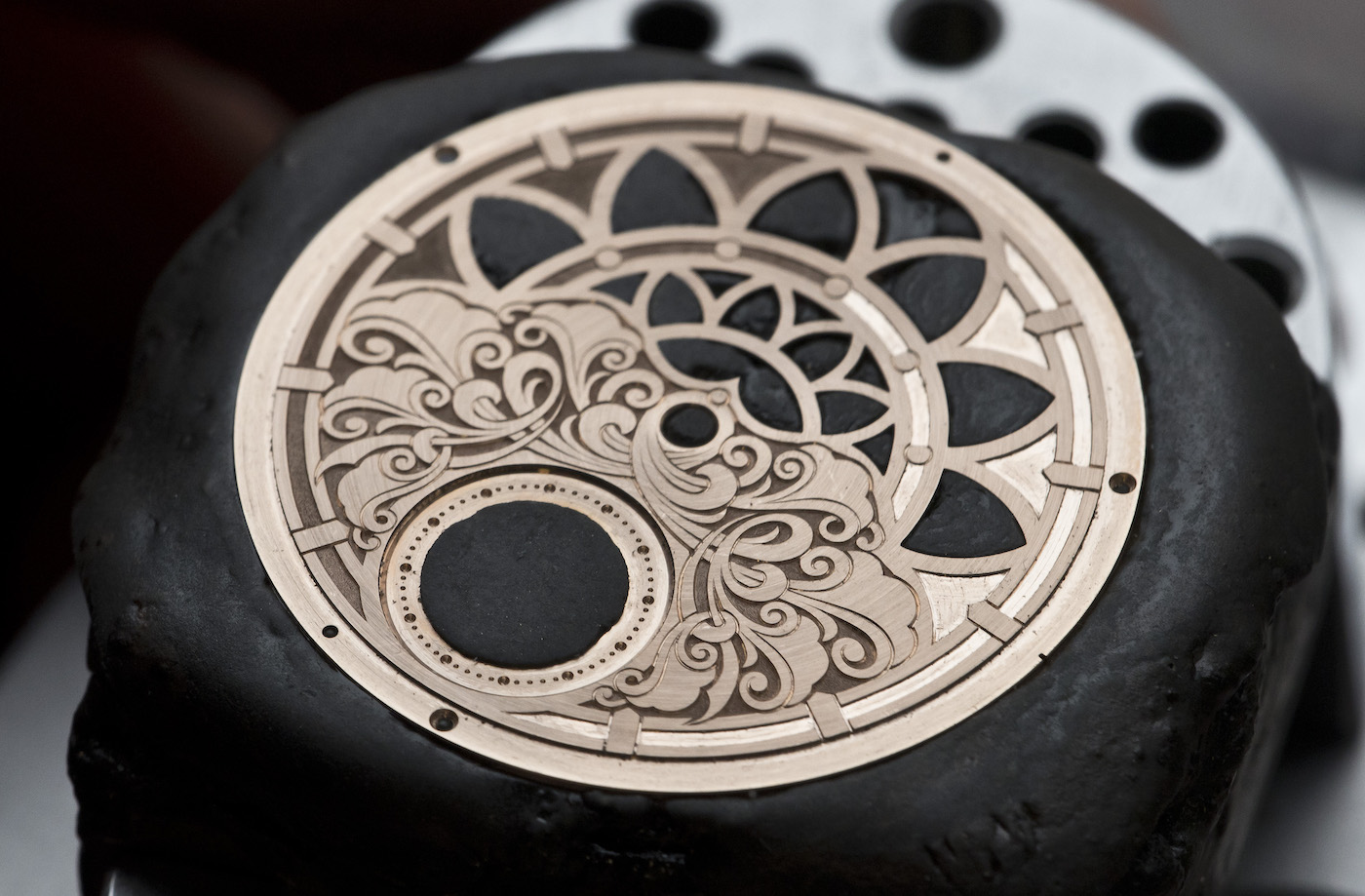 The new Molnár Fábry Architectural Art Piece was inspired by the decorative techniques associated with the Art Nouveau movement. The arched windows in the beautifully engraved dial reveal the hand-wound caliber that powers the watch. Most noticeable is the large, skeletonized barrel containing the mainspring, which is responsible for a 56-hour power reserve. 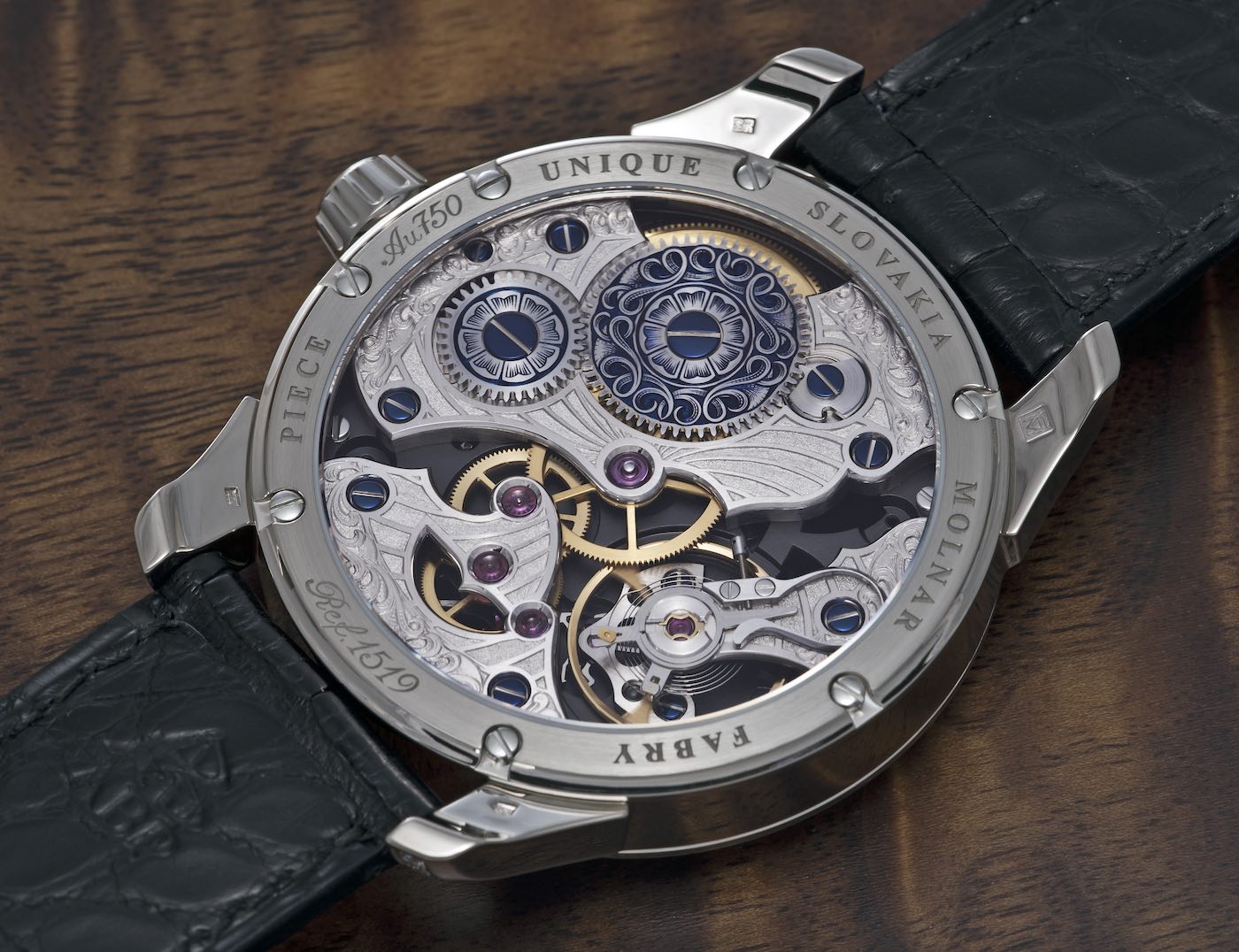 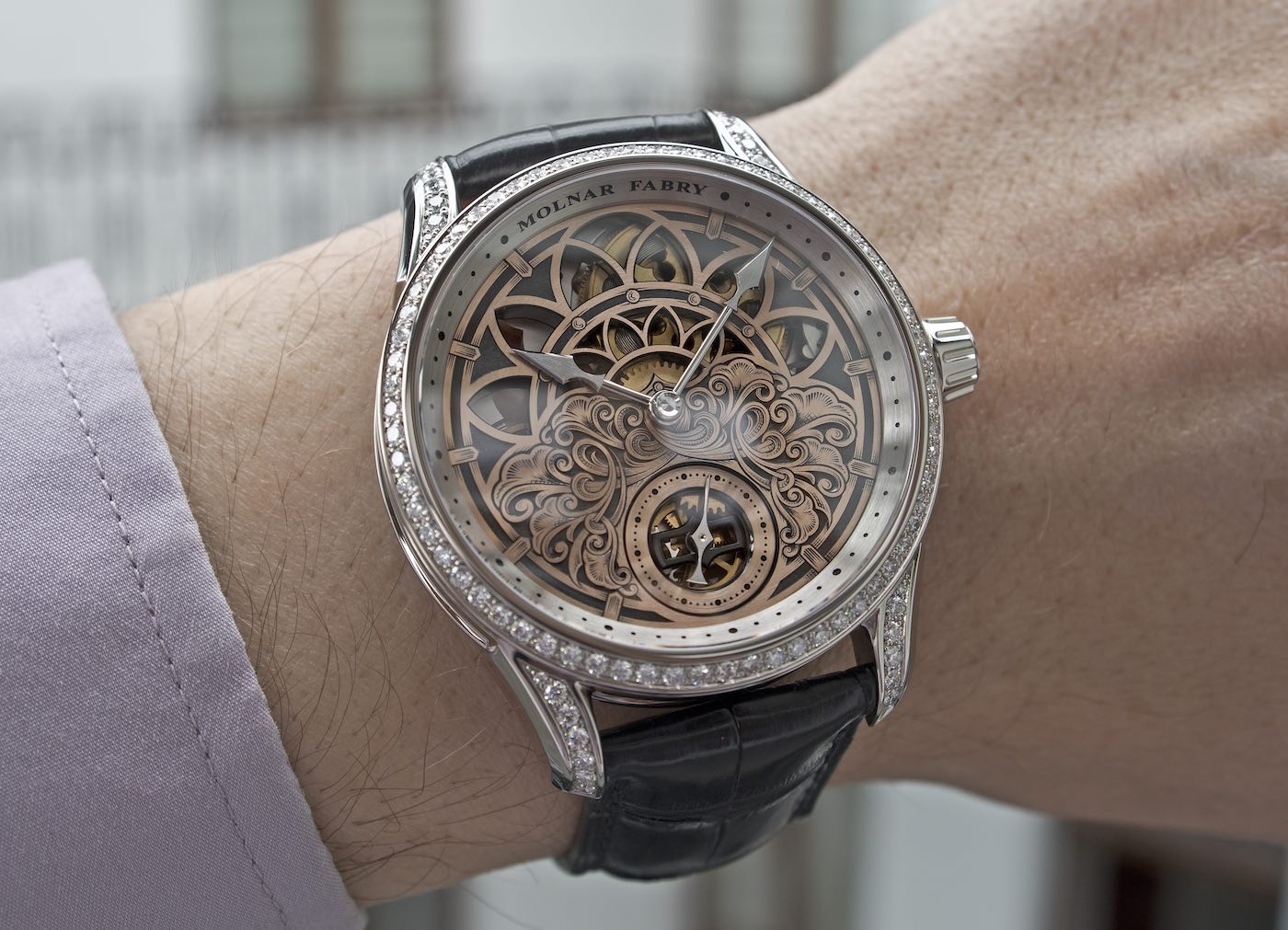 A wide range of aesthetic modifications has been made to this movement. A series of blue, hand-engraved steel wheels dominate the view through the sapphire caseback, while the 18k rose gold dial, visible through an anti-reflective sapphire crystal, has been deeply hand-engraved with a traditional scrollwork pattern before being treated with black ruthenium to add depth. In total, the time taken to produce this watch was around 600 hours. 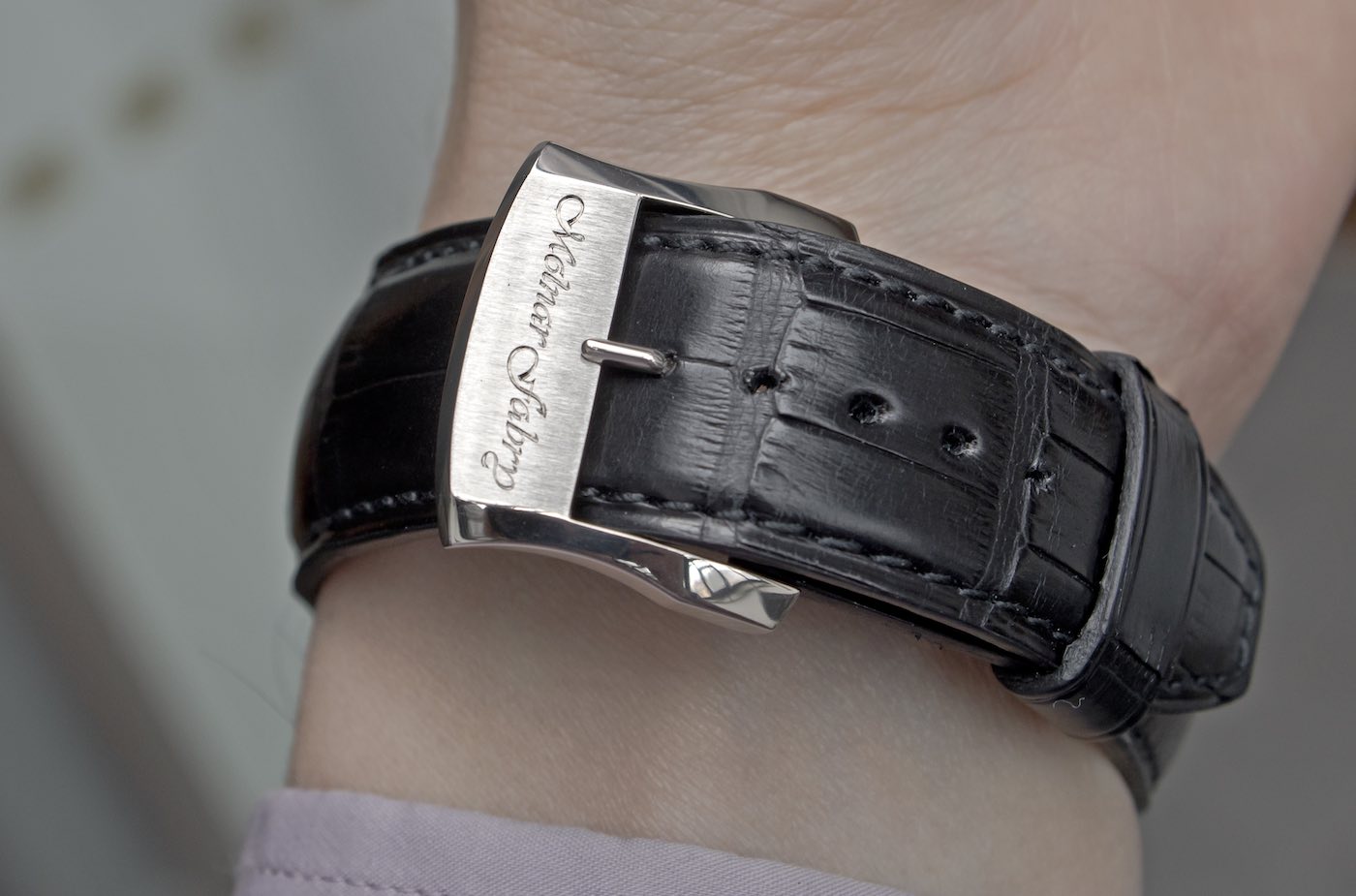 In addition to the heavily decorated movement, so too has the case been given due attention. The 44mm white gold housing (weighing in at 80.66g) is set with a total of 2.03 carats of VS/F diamonds. The handmade deployant buckle is also made of white gold and weighs a further 8.88g. The price of the Molnár Fábry Architectural Art Piece is €44,500 plus taxes. Learn more about this brand’s artisanship at molnarfabry.com.