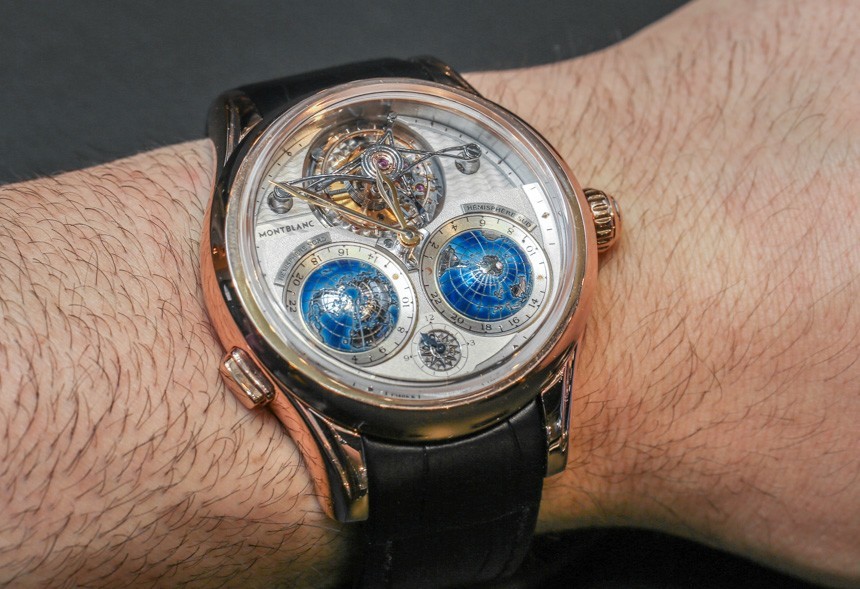 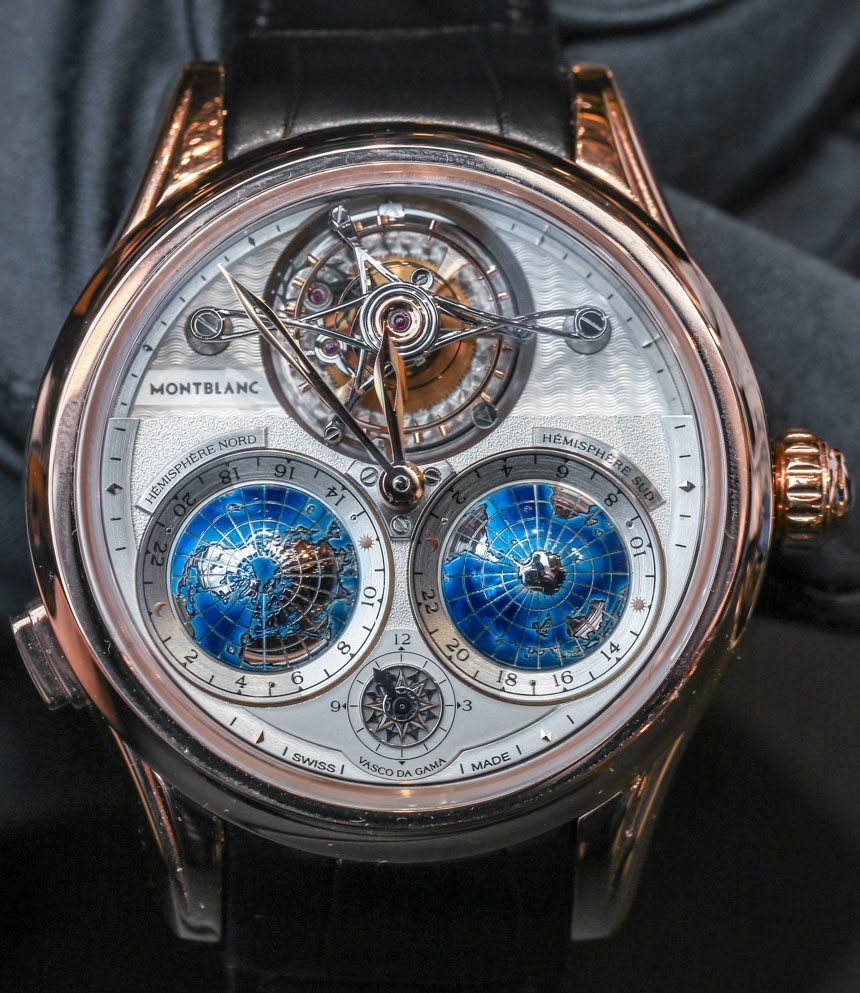 I really do love watches with personality. It’s personality and story which really get us excited about watches. The latter is probably more difficult to accomplish than the former because making an interesting looking watch is often harder than making one with actual built-in sentimental value. We will explore if that is the case with the new-for-2015 Montblanc Collection Villeret Tourbillon Cylindrique Geosphères Vasco da Gama watch and what this very interesting top Montblanc timepiece is all about. 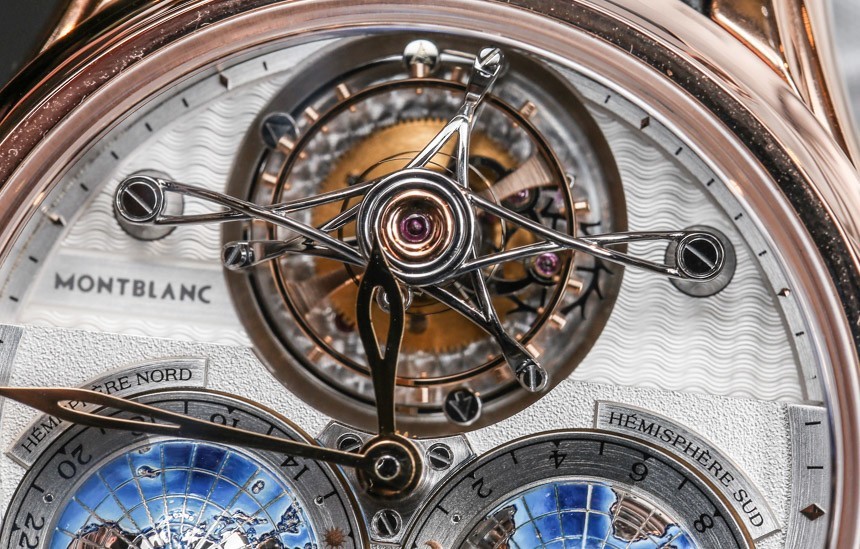 Let me be clear that, as far as I know, nothing about this new Montblanc watch has anything even remotely to do with the famed explorer Vasco de Gama. Montblanc appears to have some connection to exploring the Earth this year in 2015, but other than some marketing direction choices, this modern mechanical timepiece has nothing to do with the explorer, anything he or his group discovered, or boats in general. It is, however, among the few watches I am familiar with that allow you to view the time in places in both the Northern and Southern Hemispheres.

The context for the Montblanc Collection Villeret Tourbillon Cylindrique Geosphères Vasco da Gama watch is the Montblanc Villeret manufacture in Switzerland that they took over several years ago. It was formerly Minerva, but has since become Montlanc’s most exclusive location for producing watches. It isn’t difficult to see the design elements in the watch that signify its inclusion in the list of items produced from Montblanc Minerva. That really refers to the style of the watch and its movement. From the dial-side of the watch, is it clear that the tourbillon is something produced by the formerly Minerva crew. 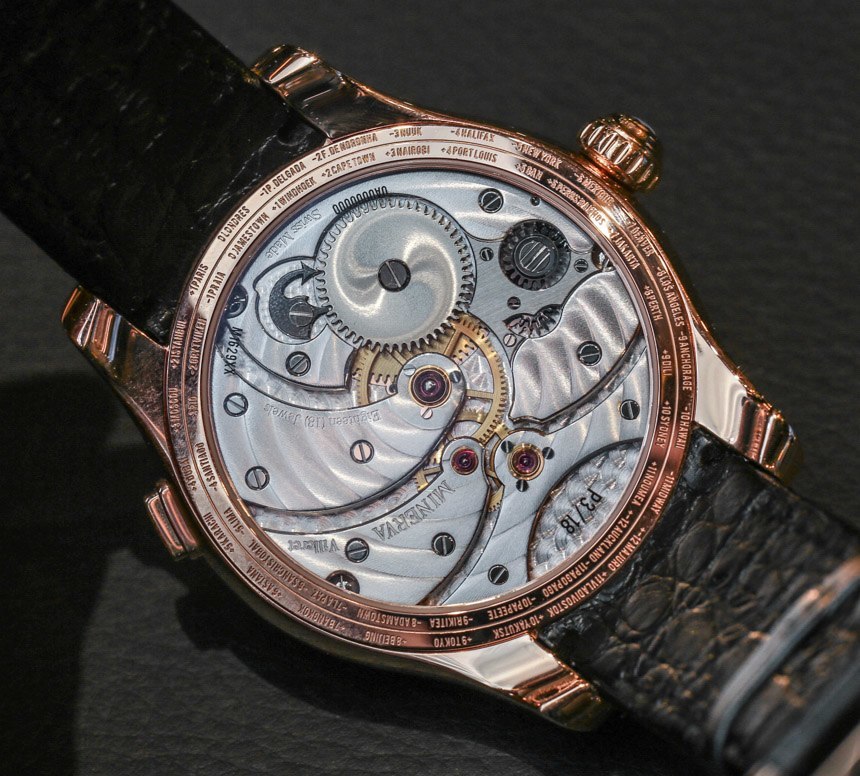 Inside the watch is the in-house made at Montblanc Villeret caliber MB M68.40 manually wound movement. Produced from 281 parts, the movement operates at 18,000 bph (2.5 Hz) with a power reserve of 48 hours. Montblanc produces (at Minerva) their own balance wheels and hairsprings – which are two items watch manufacturers rarely produce on their own. 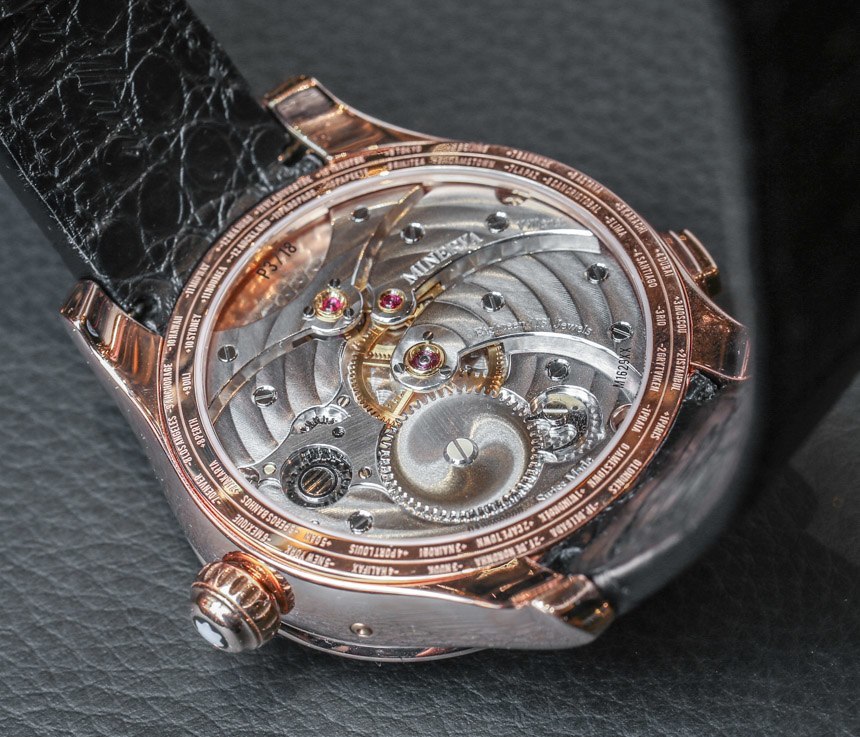 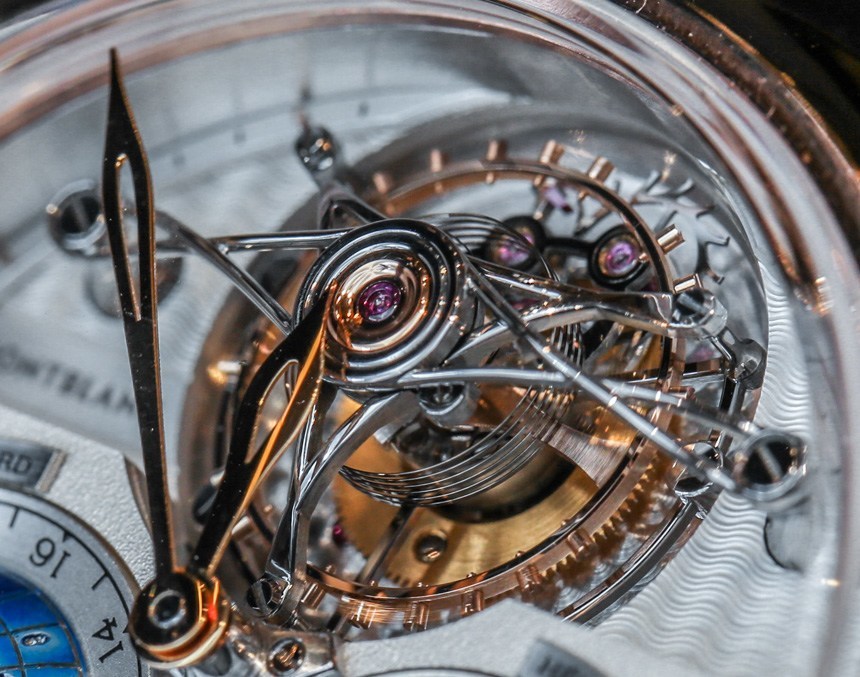 The main appeal of the caliber MB M68.40 is not only its tourbillon, but its ability to indicate the correct time anywhere in the world, using two timezone indicator globes that represent the Northern and Southern Hemispheres. Typical of Montblanc Villeret watches with tourbillons, the tourbillon cage is very large at 14.5mm in diameter. Perhaps even more interesting is the shape of the balance spring inside of the regulation system. While most balance springs are flat, for this particular watch, Montblanc uses what is known as a cylindrical balance spring. This means the spring is twisted to look like a cylinder versus a flat ring – the purpose of which is to assist in timing results over the year. 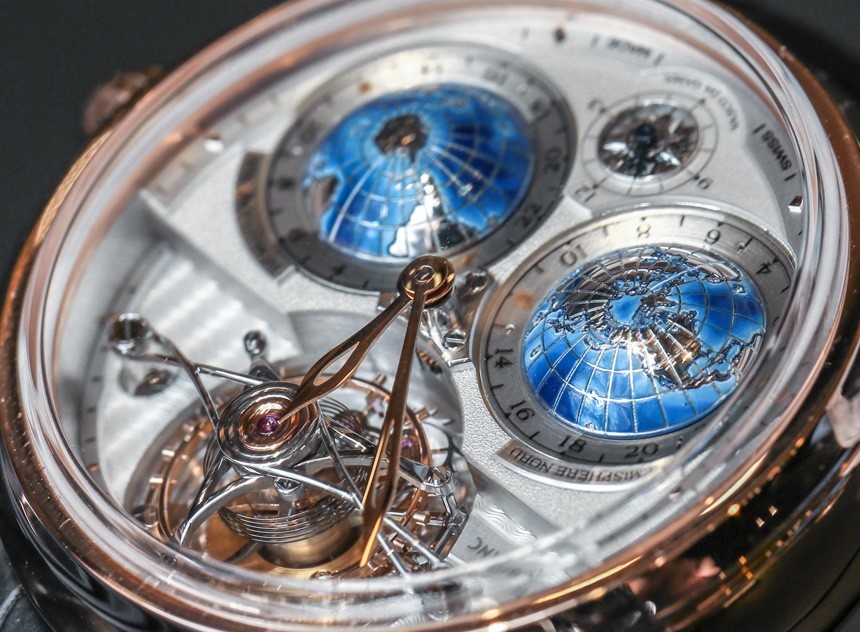 The ability read up to three separate time zones on the Montblanc Collection Villeret Tourbillon Cylindrique Geosphères Vasco da Gama watch has everything to do with the fact that Montblanc designed the dial to have the home time, and a 24-hour time display ring for both halves of our planet. 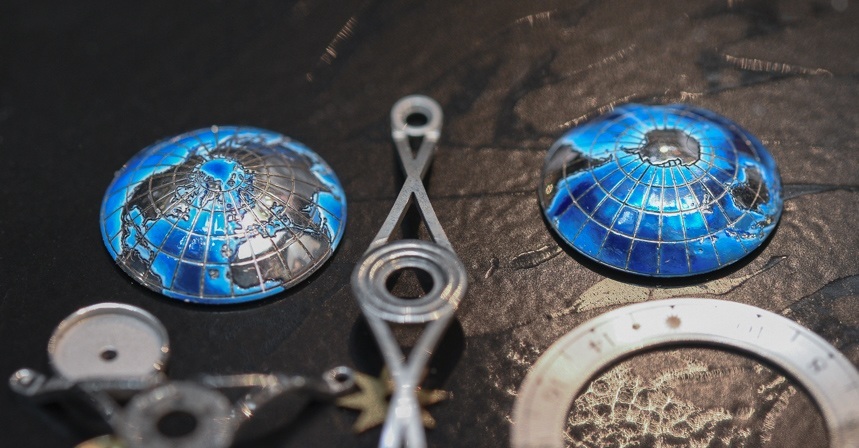 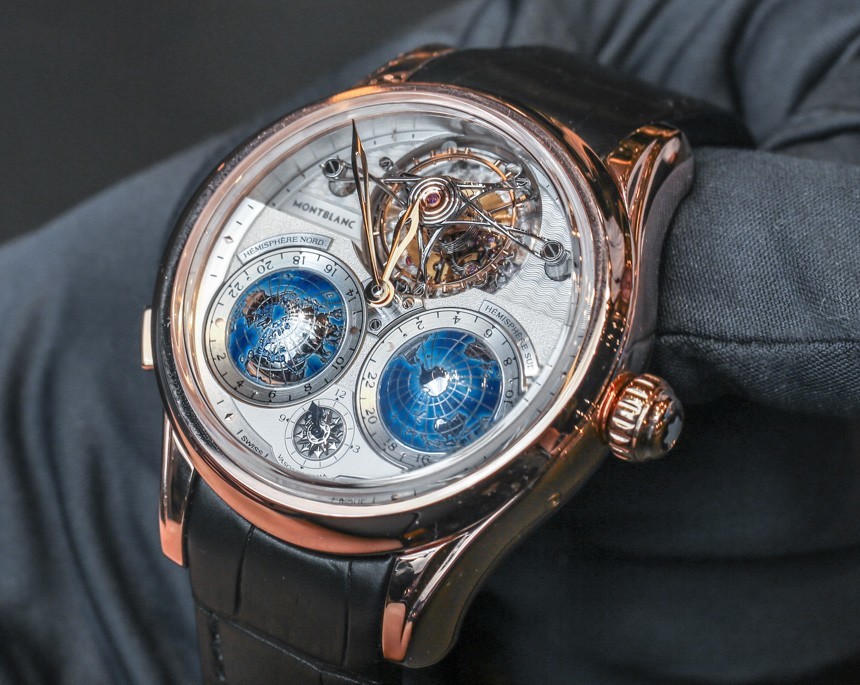 The two “hemisphere” domes on the dial make for an interesting set of eyes to match the “tourbillon mouth.” If there was ever a watch that appeared to have a face on it, it is the Montblanc Collection Villeret Tourbillon Cylindrique Geosphères Vasco da Gama. Detailing is intricate and impressive, but owners of this watch will always see a face staring back at them when checking the time or admiring the dial. 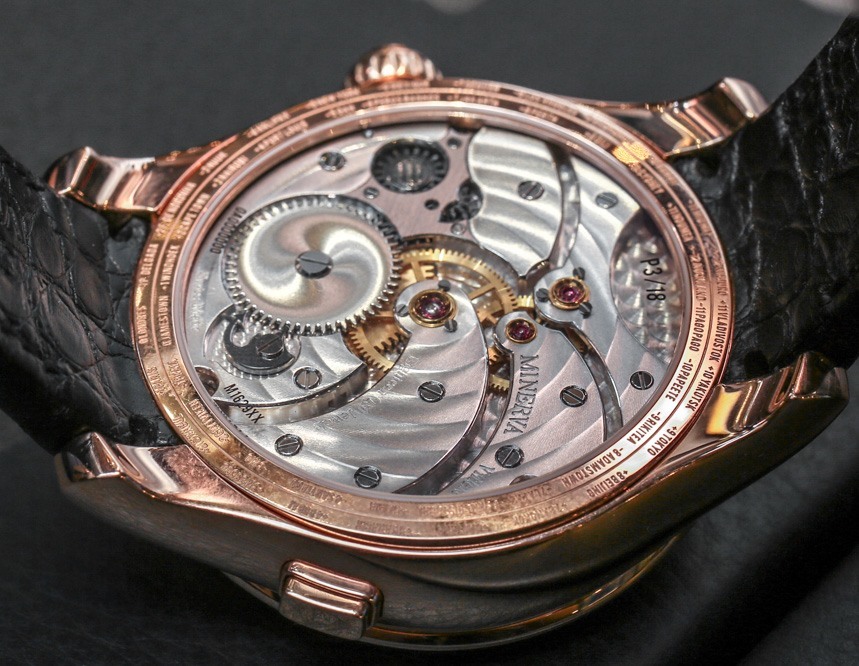 The Montblanc Collection Villeret Tourbillon Cylindrique Geosphères Vasco da Gama for now is being offered in only 18k red gold with a case that is a large 47mm wide by 15.38mm thick. On the rear of the watch engraved in the gold around the caseback window are a list of reference city names for both the time in the Northern and Southern Hemispheres. Really what you are getting with having the time in both parts of the planet is an expanded series of reference city names and some additional coolness.

The Montblanc Villeret watches feel very different than their other models in terms of design as well as (clearly) fit and finish and overall style. Even though the quality is there, the design is decidedly niche. Montblanc has an excellent resource in Villeret, but it is up to them to use the niche facility better. Still sort-of-new Montblanc CEO Jerome Lambert has the responsibility of making sure the Montblanc Villeret location is all that it can be. I don’t think Mr. Lambert has quite done that yet, but he certainly has other priorities in mind and is rather focusing on the higher-volume watch production side of the business at Montblanc. When he is satisfied with that, then maybe what Montblanc Minerva does will change. 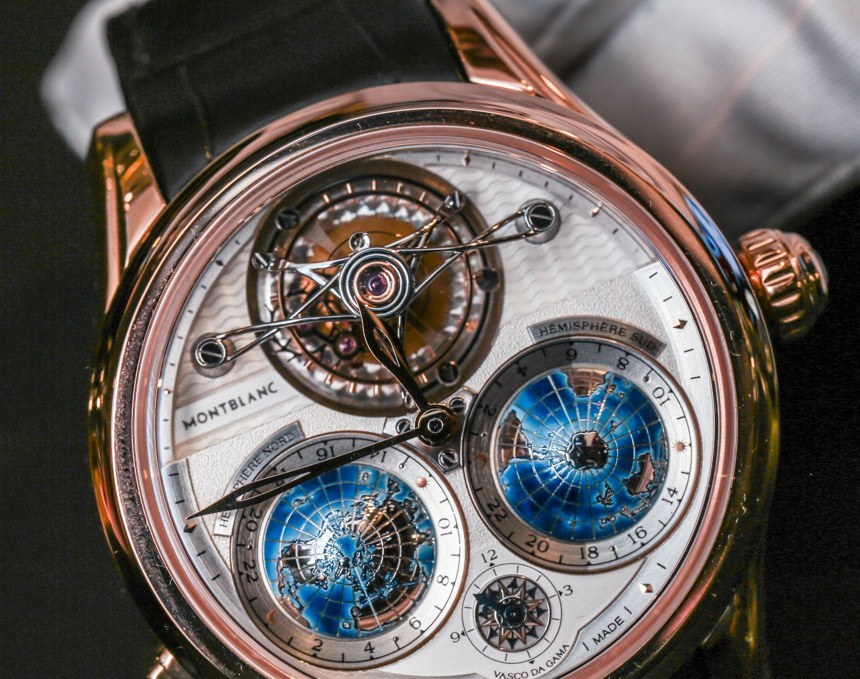 Until then, it remains a special environment for watch makers to have fun and also produce unique timepieces in the otherwise large luxury brand. Montblanc Villeret watches across the board are certainly the more impressive watches that are produced at Montblanc, and remain among the most uniquely designed and rare watches from the brand – as well as the industry, when you think about it. 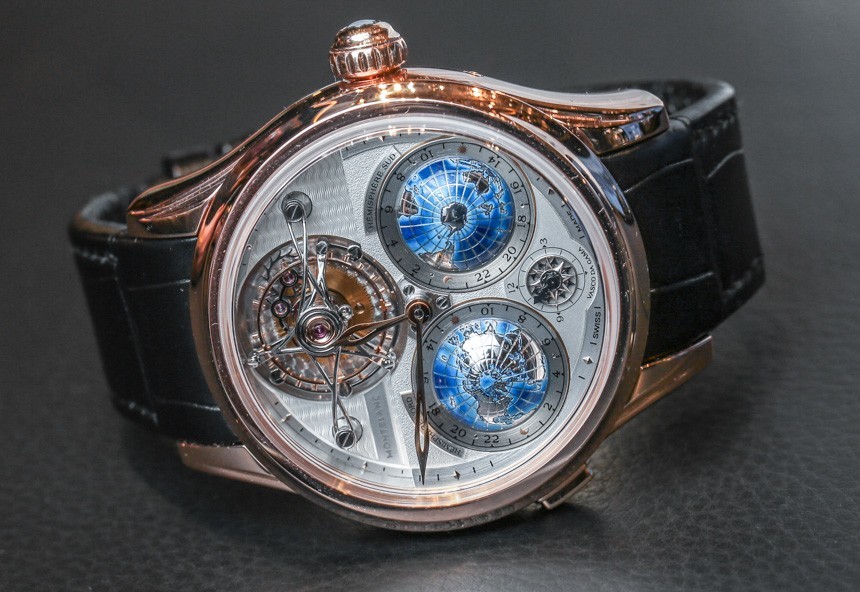 Even though the pointlessness of the Vasca da Gama element of the watch’s name is irritating, the Montblanc Collection Villeret Tourbillon Cylindrique Geosphères Vasco da Gama ref. 111675 watch is one of those odd but refreshing breaths of fresh air in an industry that is currently a bit lacking in the “innovative design” department. Montblanc will produce just 18 pieces at a price of 250,000 Euros each. montblanc.com