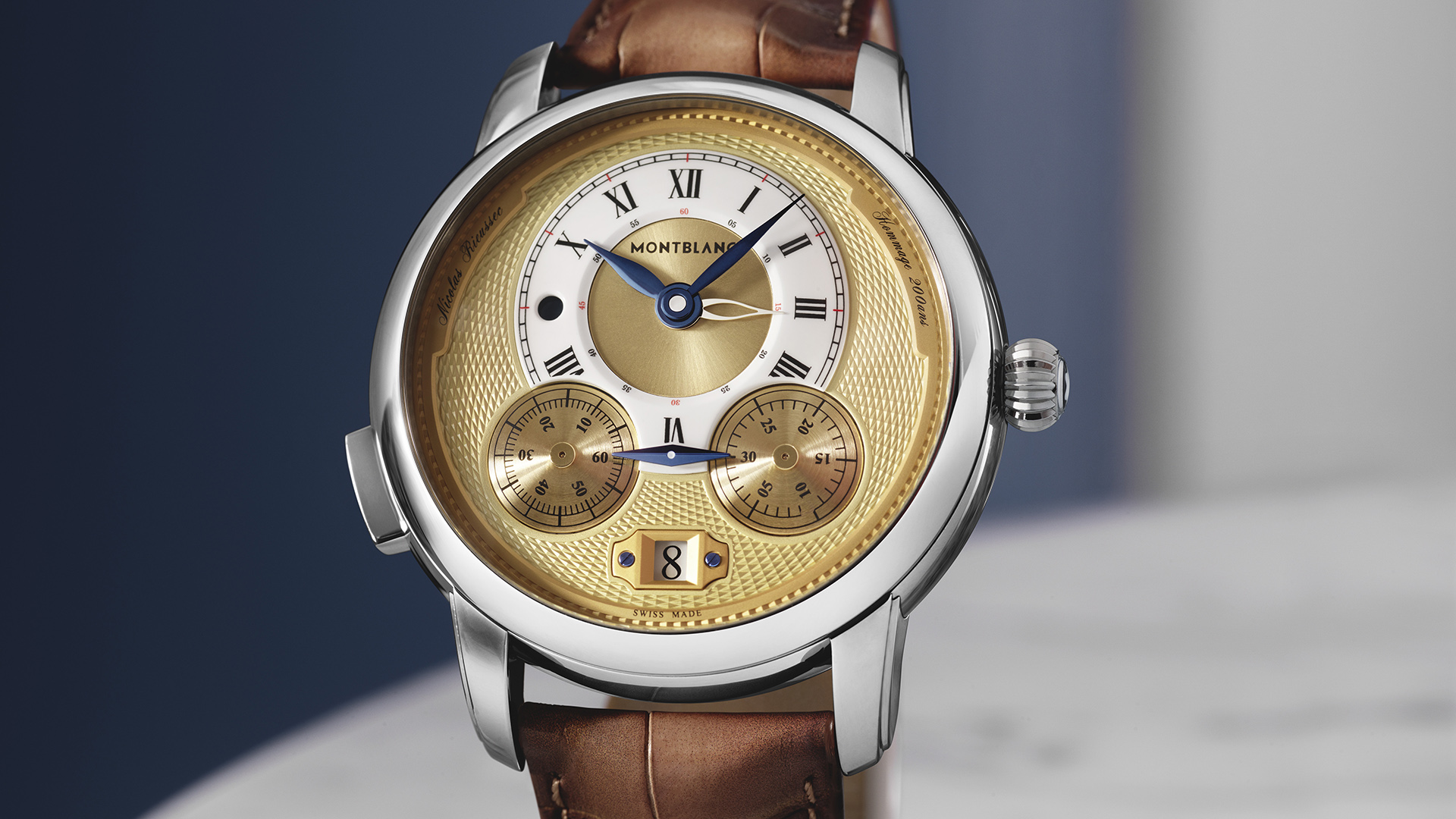 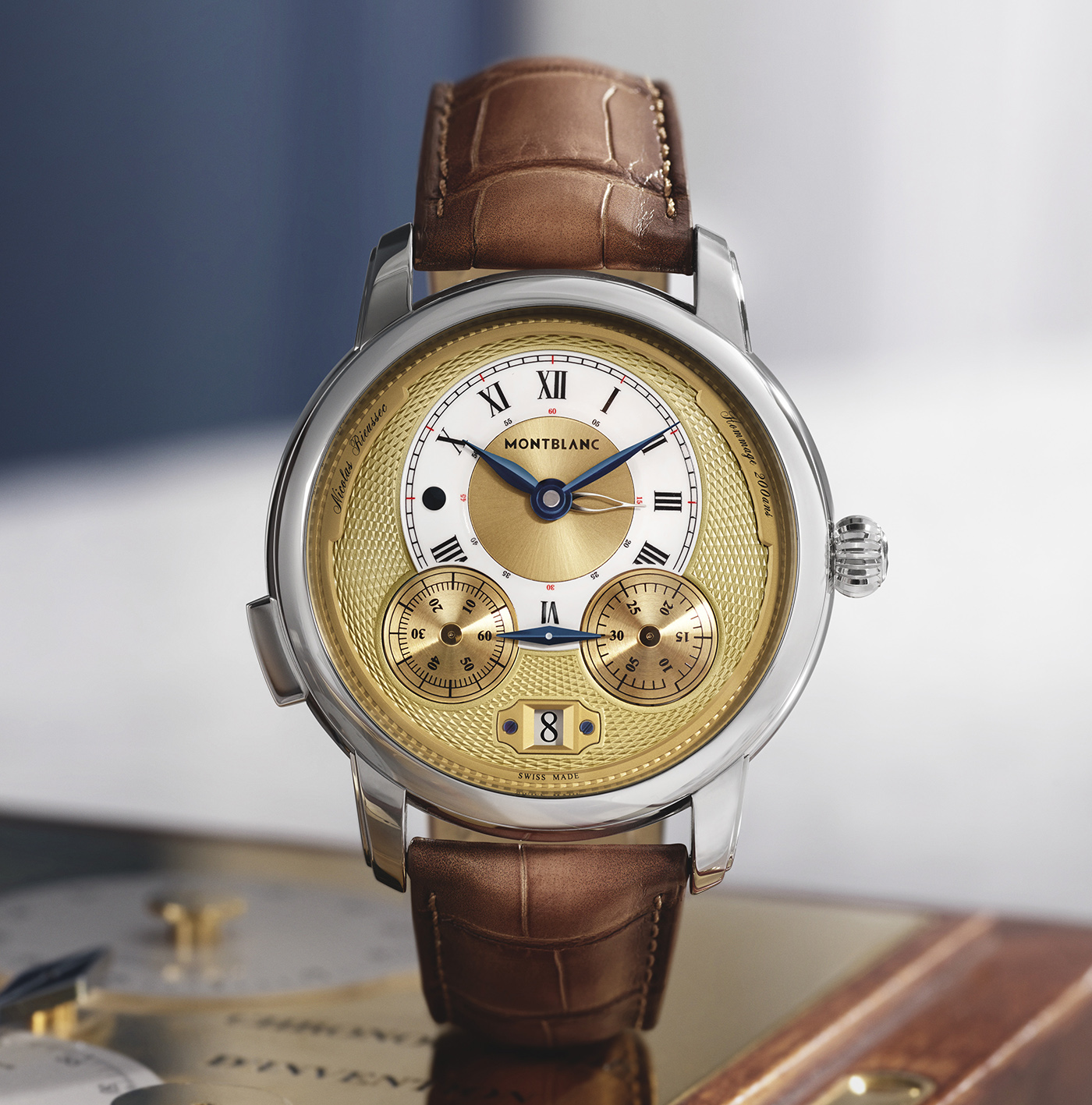 With the possible exception of the date window, the chronograph is the single most common and influential complication in all of watchmaking, offering a pleasing blend of useful functionality and mechanical complexity. Where does the term “chronograph” come from, however? The term dates back to September 1, 1821, and a prestigious horse race in Paris. Nicolas Rieussec, at the time the royal watchmaker to King Louis XVIII of France, created a new device with a pair of rotating dials and a fixed black nib to time the race, allowing the user to mark the precise time of each racing horse’s finish for record-keeping. When Rieussec presented his new invention to the French Academy of Sciences, he christened the complication the chronograph (Greek for time-writer), and the name has carried on for two centuries. Montblanc aims to celebrate the bicentennial of the chronograph with its latest release, reinventing its Nicolas Rieussec Chronograph series with visual cues from the original 1821 design. The new Montblanc Star Legacy Nicolas Rieussec Chronograph Limited Edition 200 combines an ornate classical style and a uniquely 19th-century inspired take on the chronograph complication for a handsomely traditional tribute to the very first chronograph. 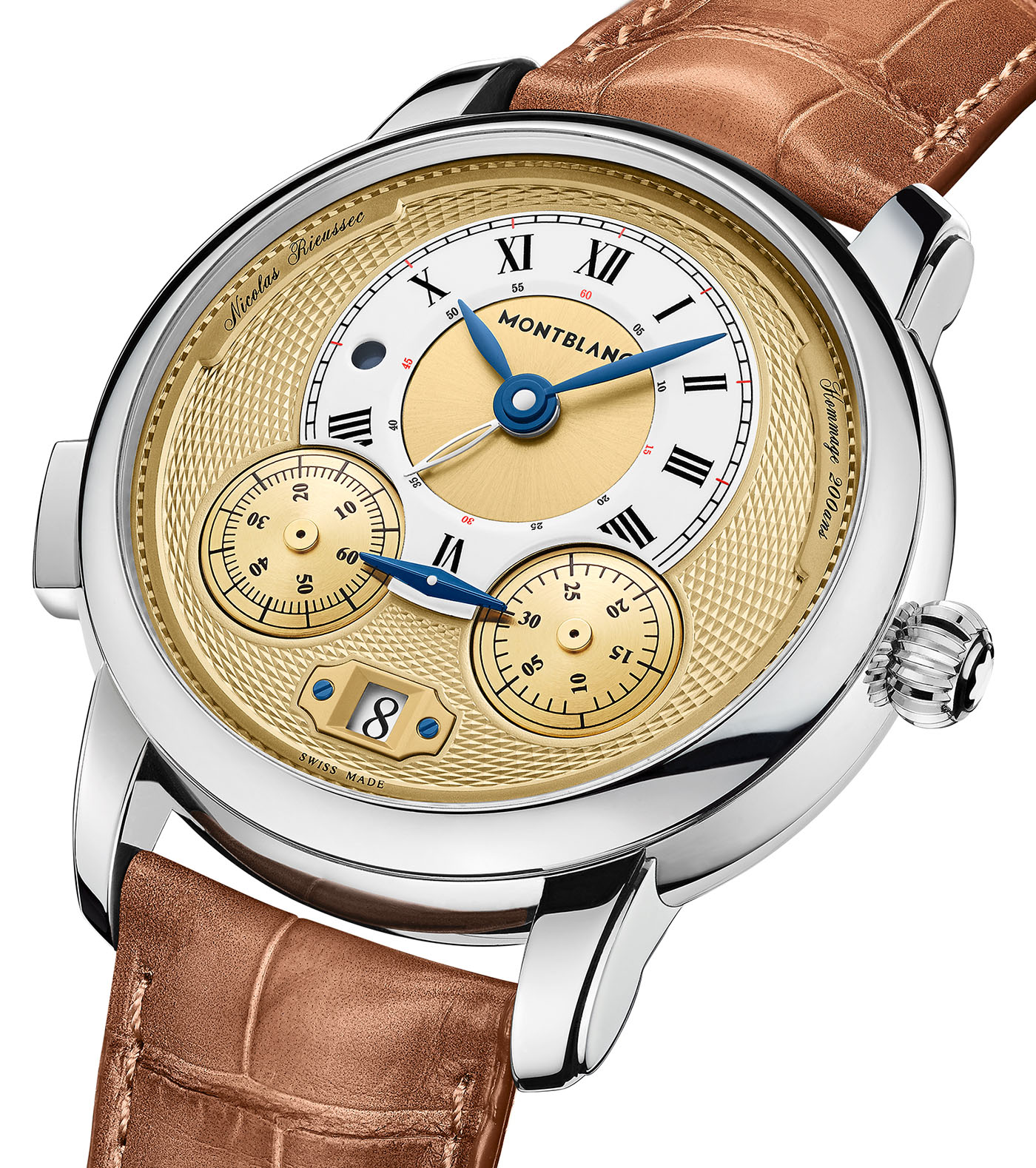 At 44.8mm-wide and 15.1mm-thick, the polished stainless steel case of the Montblanc Star Legacy Nicolas Rieussec Chronograph Limited Edition 200 carries an imposing presence in initial images. The actual design itself is clean and traditional, however, with rounded case sides, long stepped lugs, a flat polished bezel, and a prominent signed onion crown at 3 o’clock. In keeping with the classical inspiration, the Star Legacy Nicolas Rieussec Chronograph Limited Edition 200 uses a monopusher chronograph design, with all functions handled by a broad rectangular pusher at 8 o’clock. Montblanc equips this design with a sapphire display caseback to showcase the in-house movement within, and rates the case for a middling 50 meters of water resistance. That said, this is a design without any real sporting pretensions, so the lack of significant resistance is comparatively unimportant. 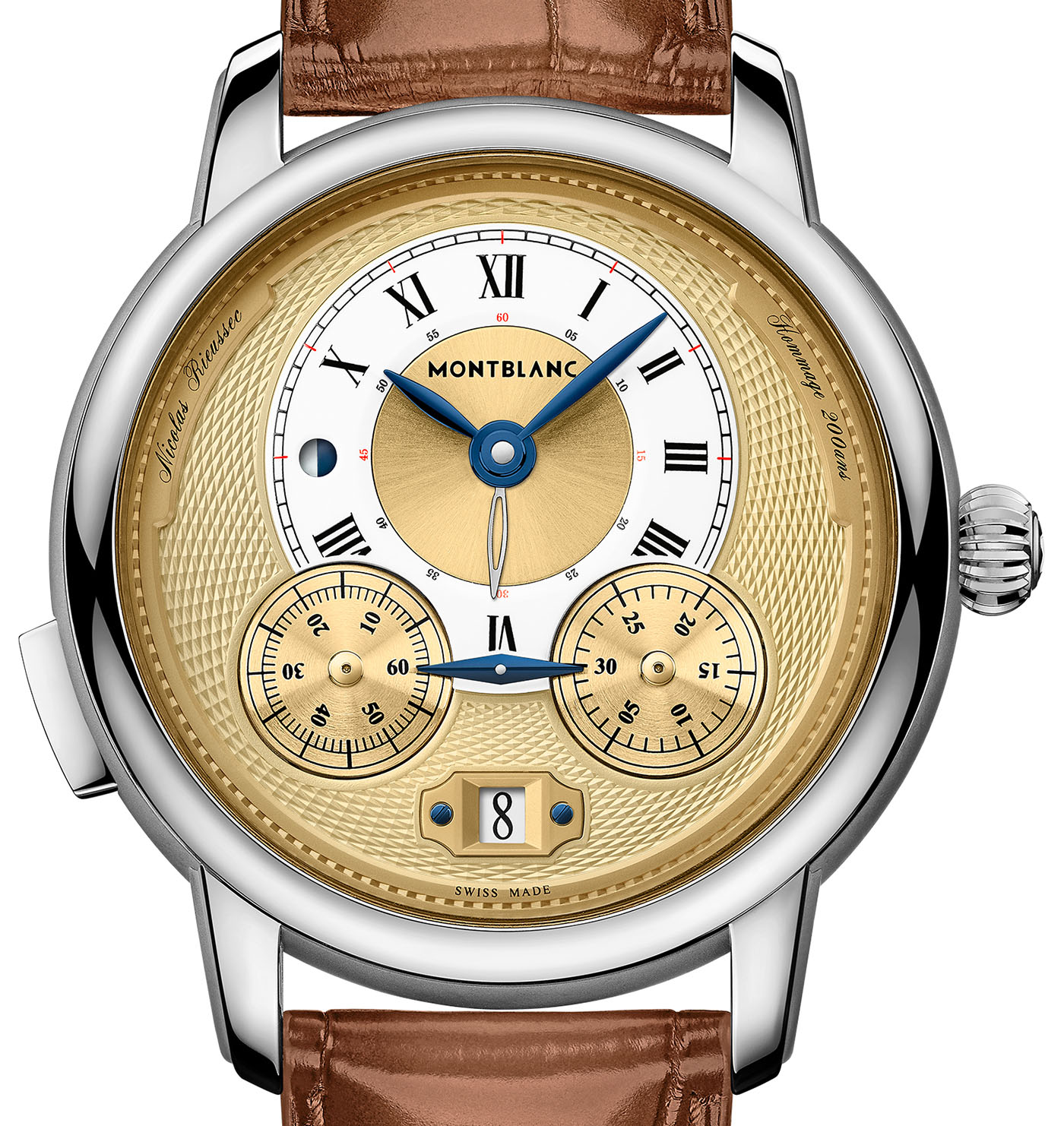 The dial of the Montblanc Star Legacy Nicolas Rieussec Chronograph Limited Edition 200 is where the brand pays its clearest tribute to its 1821 forebear. The off-center design is dominated by its use of elaborate visual layering and rococo gold-tone guilloché patterns. The main dial surface is fully finished in a diamond pattern grain d’orge pattern for a richly textured and dynamic look in initial images, augmented by a raised outer ring decorated with a filet sauté border. The main timekeeping subdial at 12 o’clock appears to float atop this textured sea in images, sporting a classical white lacquered dial ring with black printed Roman numerals and a chemin de fer minutes track. The gold theme continues here with a central section in sunburst gold, while red accents on the minutes track and elegant blued leaf hands give the design a deeper and more varied color palette. The subdial also includes a rhodium-plated skeleton GMT hand and a cutout day/night indicator for further visual complexity. The two circular brushed gold chronograph subdials are the clearest visual tribute to the 1821 original, utilizing twin rotating disks and a fixed double-ended blued hand to indicate the current elapsed time. Event the 6 o’clock date window receives an ornately decorated plaque-style frame, fixed to the dial with prominent blued screws. While it may be far from a literal translation of Rieussec’s original 1821 chronograph device, the overall dial design offers a clear and dramatic visual tribute to the look of early 19th-century watchmaking while showcasing a wealth of finishing techniques in images. 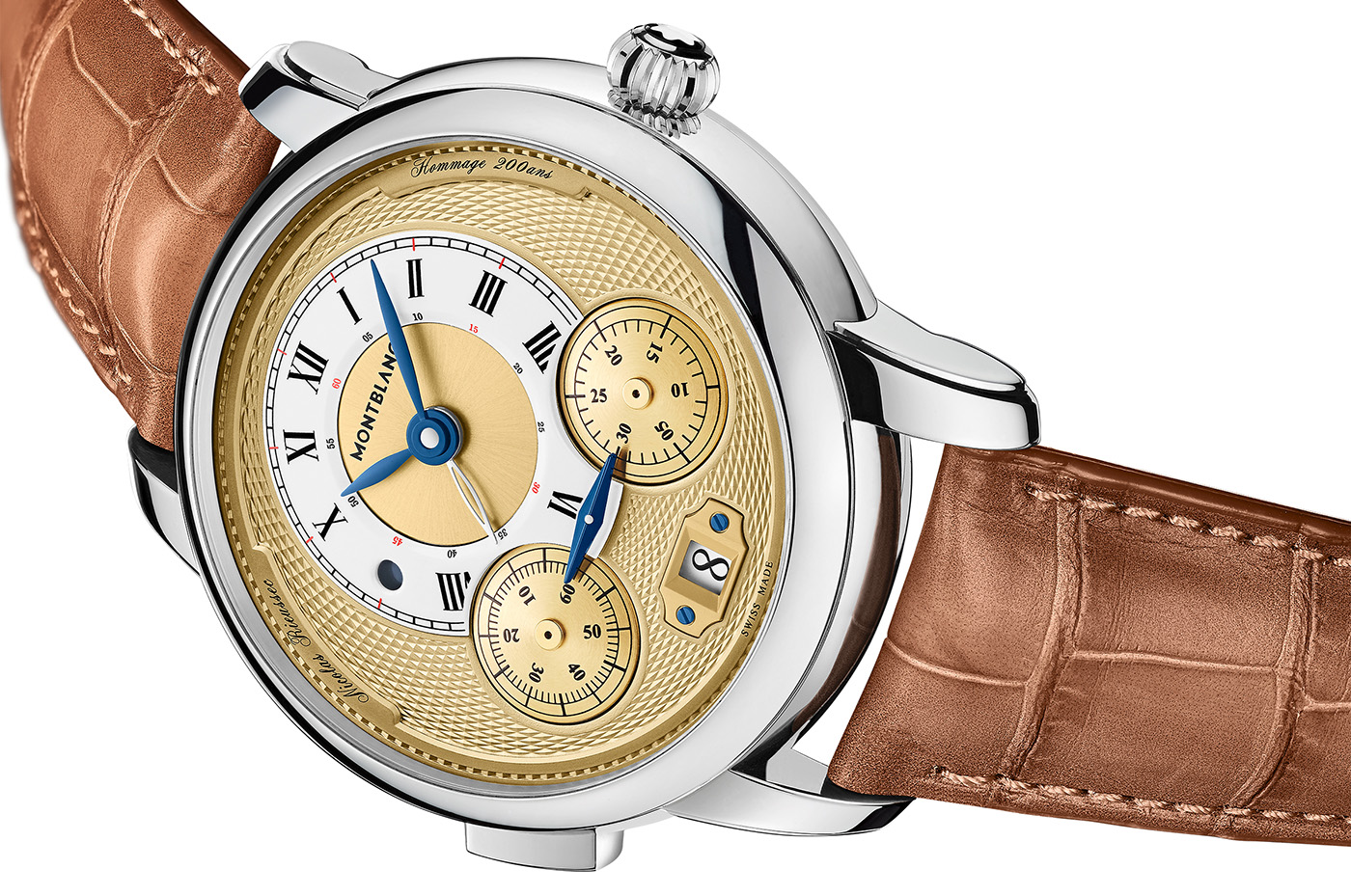 Montblanc powers the Star Legacy Nicolas Rieussec Chronograph Limited Edition 200 with its in-house MB R200 automatic GMT chronograph movement. Like the dial, the movement is ornately decorated with a special gold micro-rotor commemorating the birth of the chronograph in 1821 along with Côtes de Genève along the bridges, blued screws, and gold plated wheels. The technical side of the MB R200 is equally complex. The movement boasts a column wheel and vertical clutch chronograph actuation system, along with a quickset hour hand, twin mainspring barrels, and a transversal balance bridge. This leads to exemplary performance, including a 72-hour power reserve at a 28,800 bph beat rate. Montblanc finishes the watch with a warm honey brown alligator leather strap and a butterfly deployant clasp.