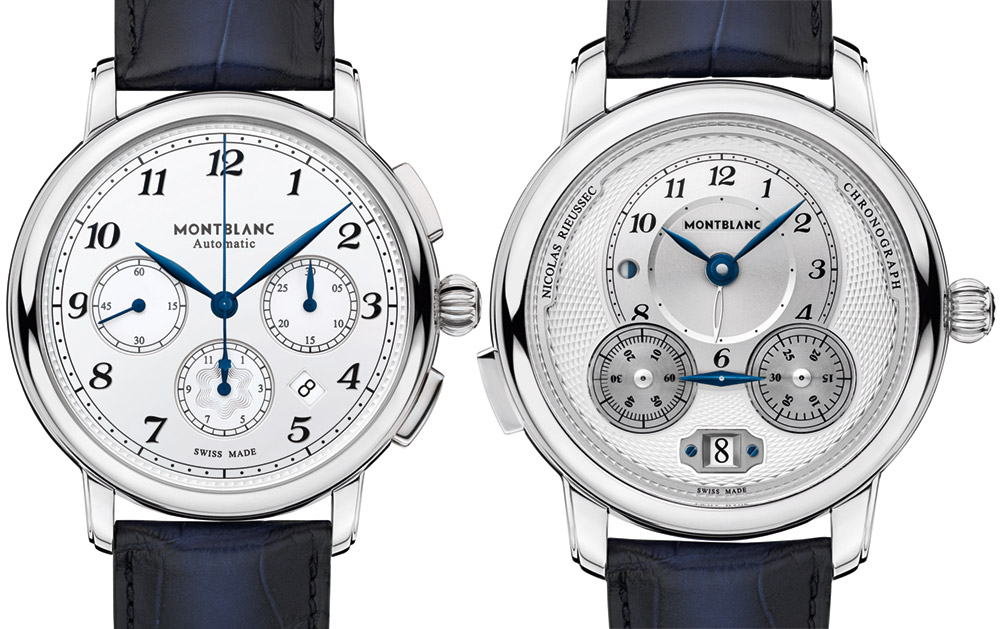 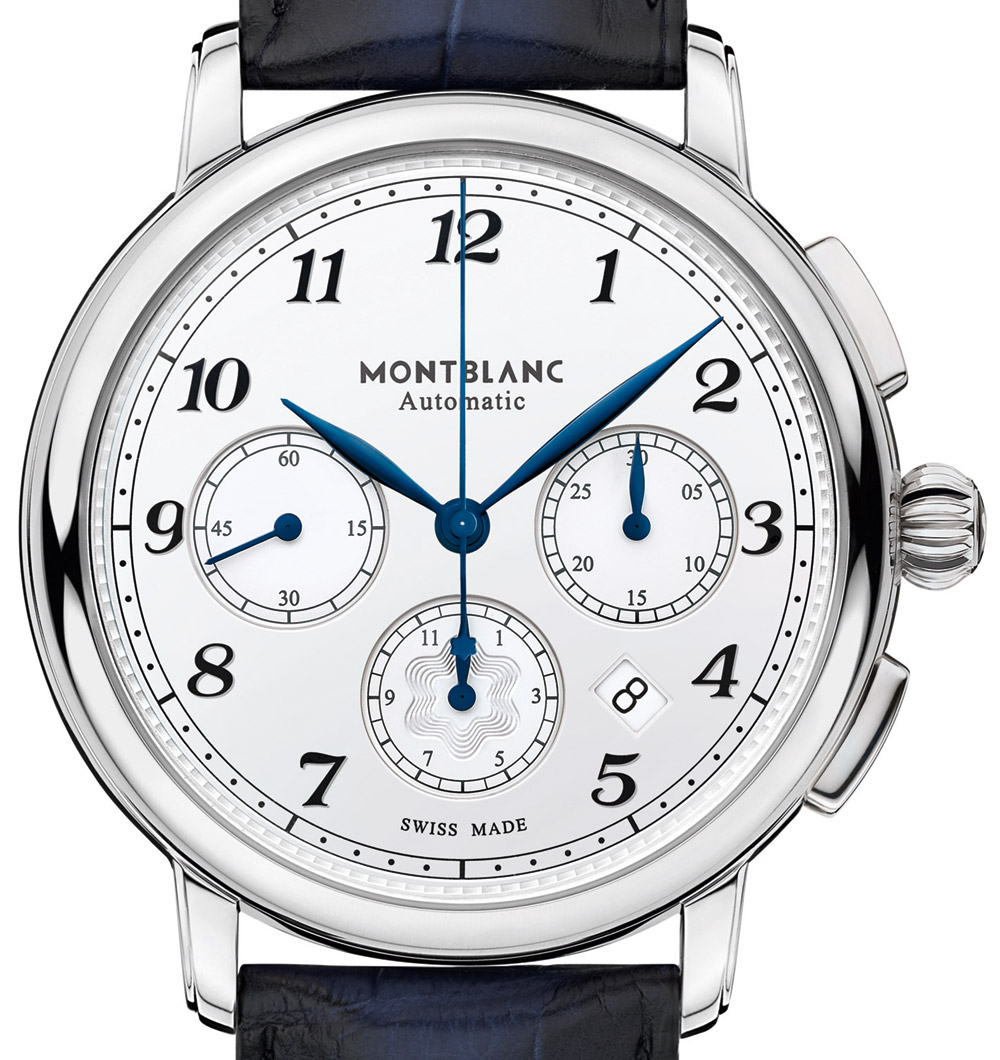 The Montblanc Star Legacy Automatic Chronograph is the more affordable model of the two, and features a dual-pusher, three-register chronograph in a 42mm by 14.23mm case. The contrast between the silvery-white dial and large black Arabic numerals provides good legibility, and the monochromatic color scheme is nicely complemented by the pops of blue on the leaf-shaped hour and minute hands and chronograph hands. The running seconds counter can be found at 9 o’clock, and a date window is discreetly (some might say distractingly) positioned at 4:30. The elapsed hour counter at 6 o’clock also features Montblanc’s signature star-shaped design in guilloché that is echoed on the counterweight on the central chronograph seconds hand as well as on the crown. 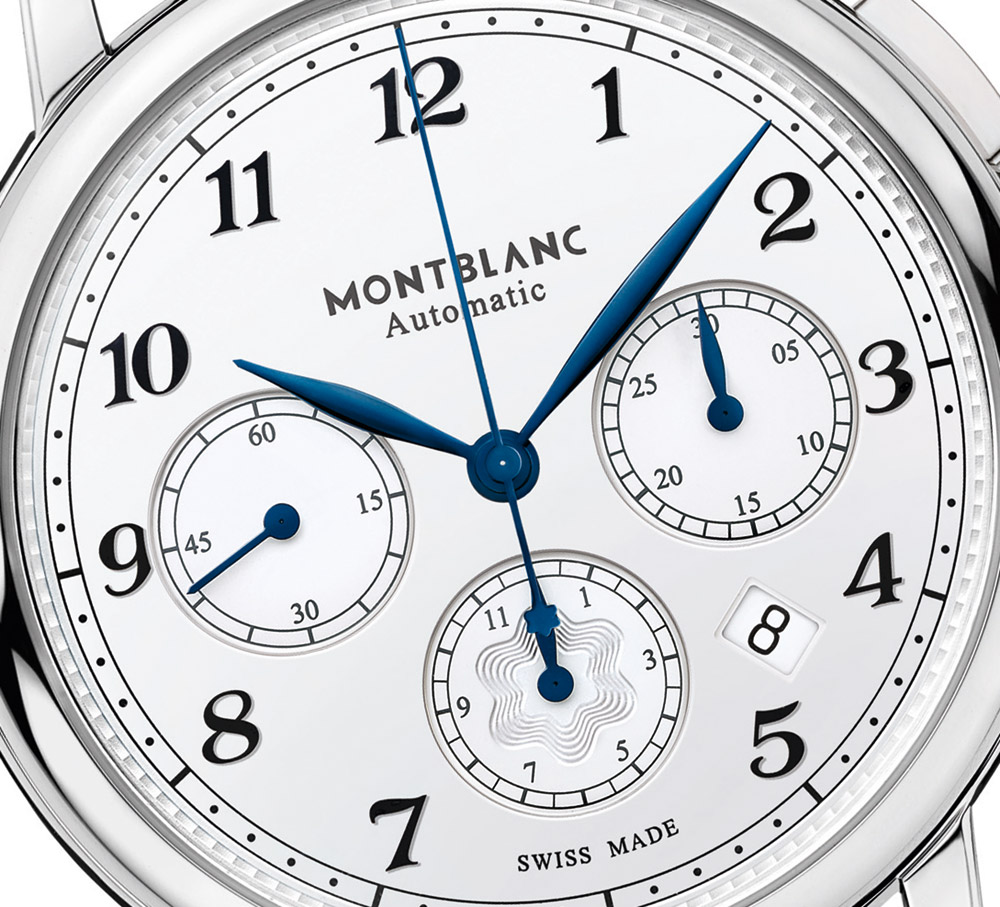 Running along the outside of the dial is a subtle but unique design element of the Star Legacy Automatic Chronograph: a railway minute track which uses dots rather than lines, which Montblanc claims is inspired by a rare feature on Minerva watches from the late 19th and early 20th centuries. Outlining this minute track is a filet sauté guilloché pattern (meaning up and down guilloché lines – even if it sounds like something culinary) which adds to the visual interest of the dial when inspected closely. The case is made of steel, highly polished, and covered with a domed sapphire crystal with anti-reflective coating. The large onion-shaped crown should make winding and setting the watch easy even with gloves on, and is a design element often associated with aviation watches. 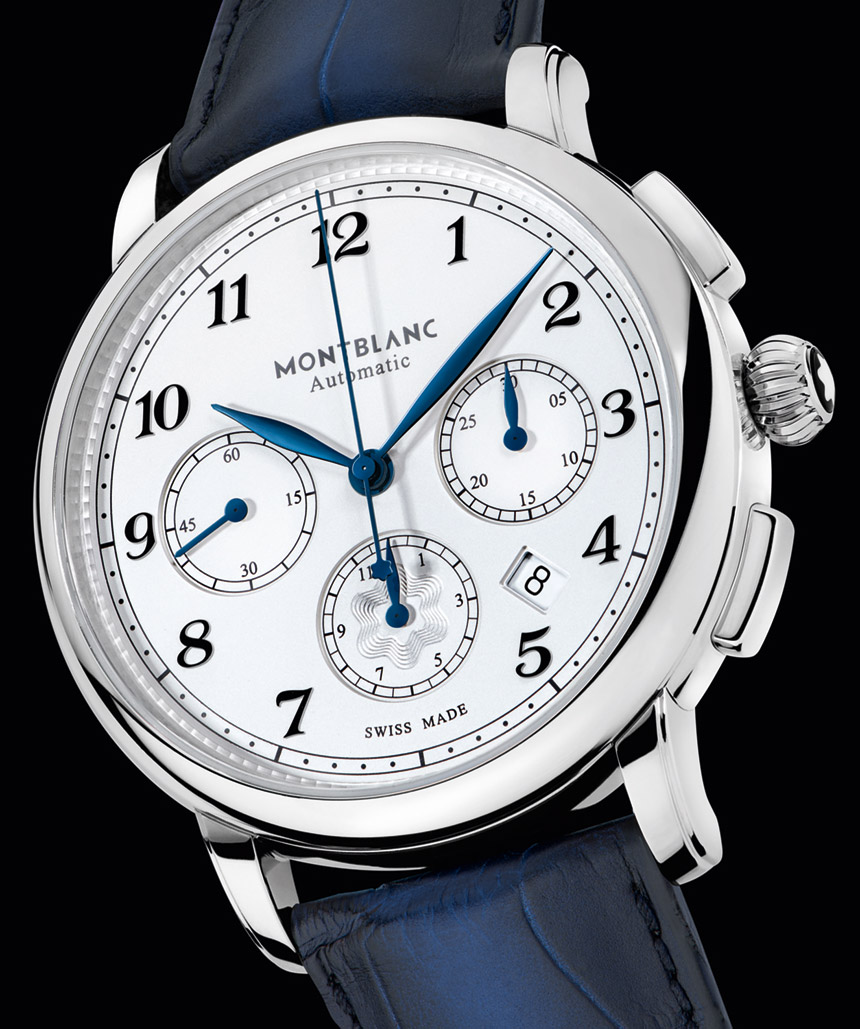 The lugs of the Star Legacy Automatic Chronograph are elegantly curved and stepped, and attach the watch to an included “Sfumato” blue alligator strap hand-made by the Montblanc Pelletteria in Florence, Italy. The hue of the strap is brighter near the center and darker towards the edges, another small design detail that might go unnoticed at first glance but adds to the overall interest and refinement of this timepiece. Visible through a sapphire crystal exhibition caseback is the Calibre MB 25.02, which is a Montblanc-branded version of the ETA 7753 and features 27 jewels, a 46-hour power reserve, and oscillates at 28,800bph, or 4Hz. 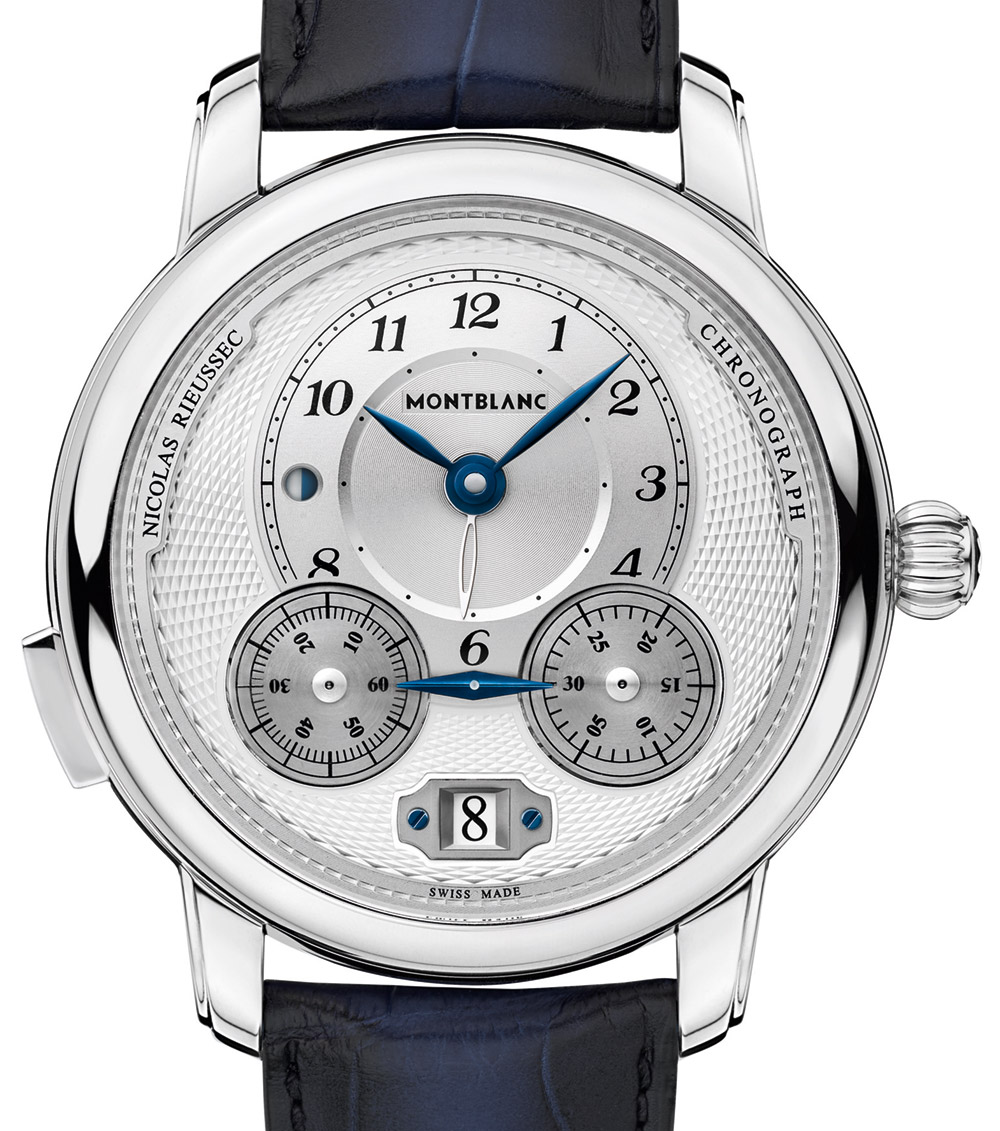 The Montblanc Star Legacy Nicolas Rieussec Chronograph is significantly more expensive than its Automatic companion, but also offers greater historical interest and visual appeal. French watchmaker Nicolas Rieussec is credited with inventing the first inking chronograph in 1821, designed to precisely measure the running times of racing horses. Rieussec’s device literally wrote the time using ink, so he named it a “chronograph” from the Greek words chronos (time) and graphein (to write). Considering Montblanc has at one time or another been best known for their writing instruments, this seems like a uniquely fitting homage. This is a much bigger watch than the Star Legacy Automatic Chronograph at 44.8mm by 15.02mm and the case is inspired by the pocket watch designs of Minerva founder Charles-Ivan Robert, such as the Gold Hunter Calibre 19’’ from 1927. 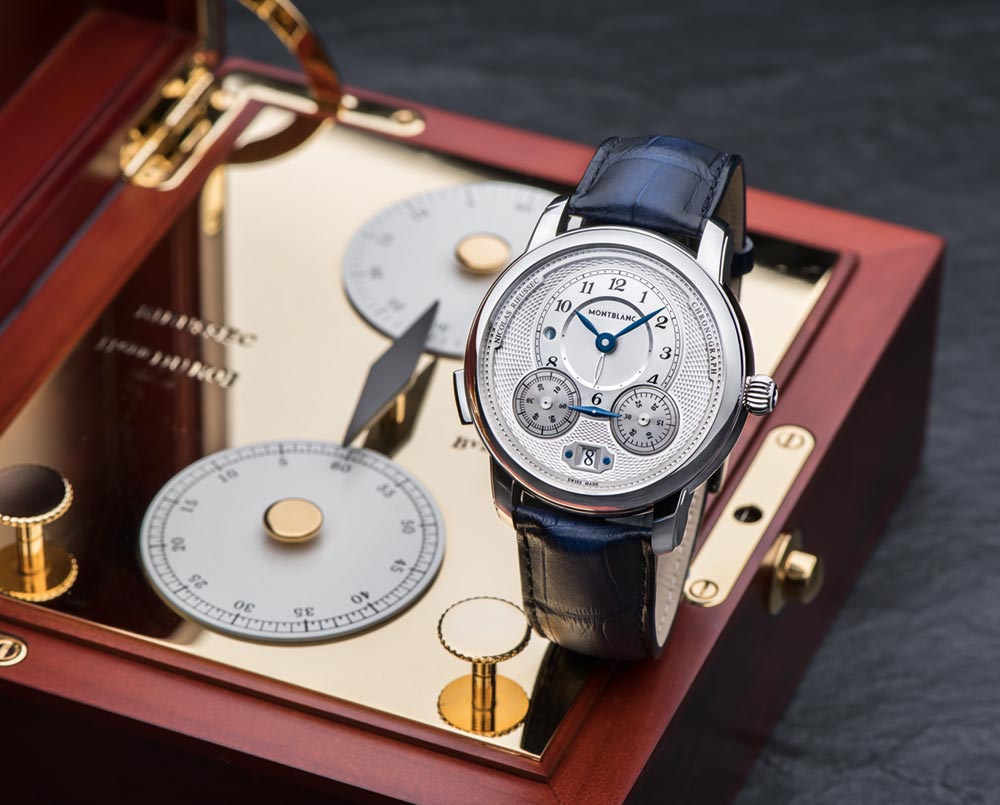 This isn’t the first Rieussec-inspired chronograph the brand has released, with earlier models including the Montblanc Nicolas Rieussec Chronograph Automatic in 2011 (reviewed here) and the Montblanc Homage To Nicolas Rieussec in 2014 (hands-on). This latest model features a reworked dial, which combines some key design elements from its predecessors, whilst seeking to improve both legibility and finishing. The Montblanc Star Legacy Nicolas Rieussec Chronograph is a monopusher like the previous models, with the single pusher integrated into the crown. Also included is a GMT hand for tracking a second time zone, a day-night indicator located at 9 o’clock on the off-center hour and minute display, a date aperture at 6 o’clock, and a travel function allowing for rapid advancements of the hour hand and date display. 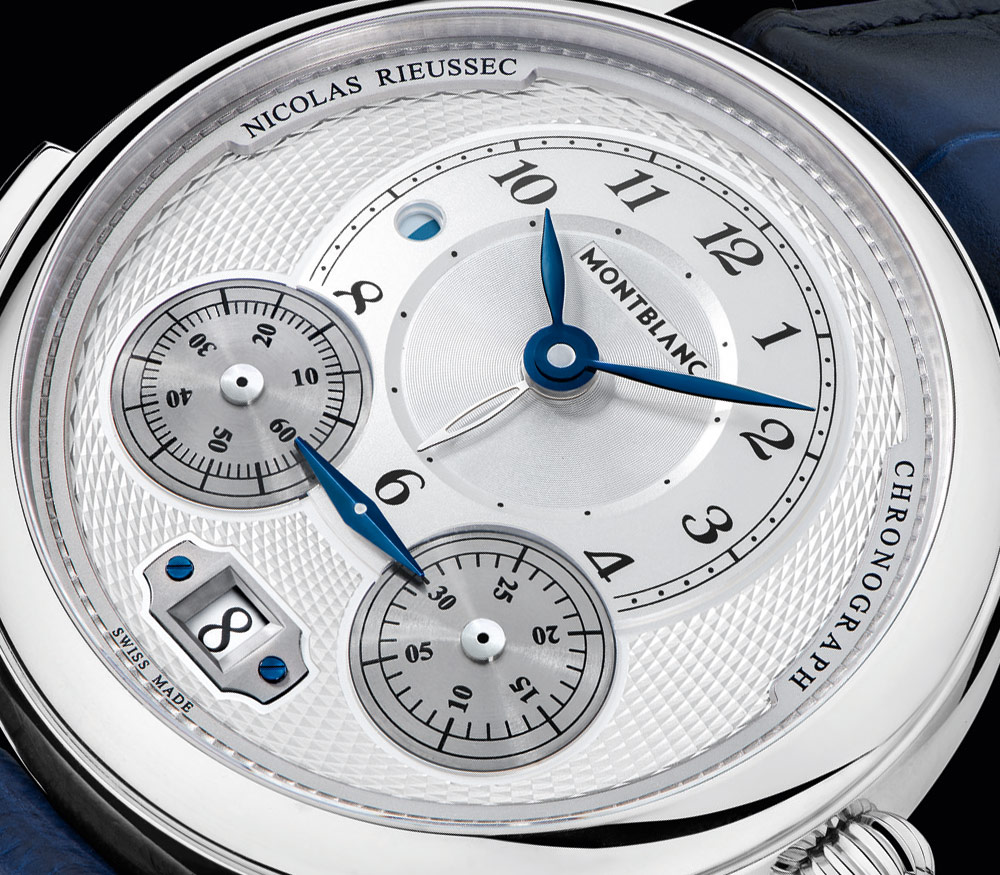 The Montblanc Star Legacy Nicolas Rieussec Chronograph uses two domed titanium discs for the 60-second and 30-minute counters, with elapsed time indicated on both discs simultaneously via a blued double index in a design similar to Rieussec’s original chronograph. A railway minute track again using dots rather than lines is also featured around the periphery of the off-center dial, along with discreet dots around the inner dial to mark the hours in a second time zone. The dial makes heavy use of guilloché for decoration, including a perimeter ring of filet sauté guilloché. The overall aesthetic is just a set of pomme-style hands away from perhaps being mistaken for a Breguet, which is certainly not a bad thing for lovers of classic decoration. 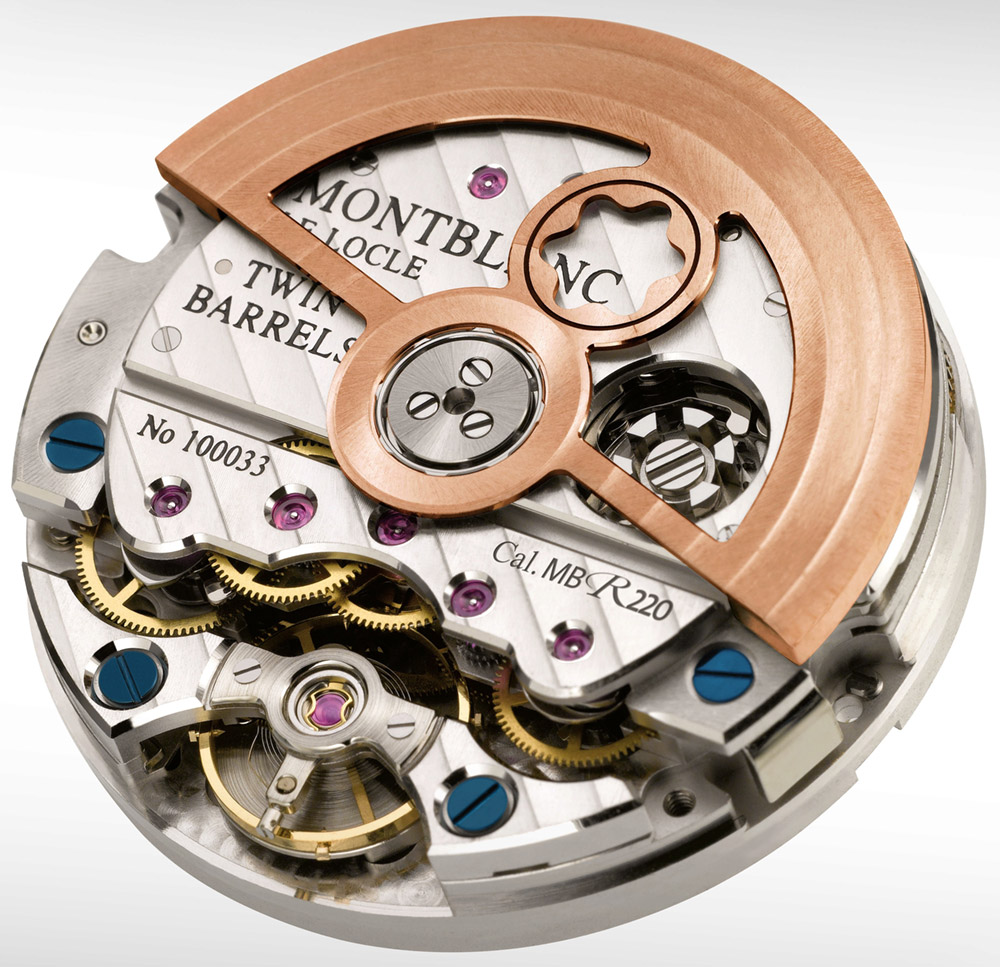 Turn the watch around and the Montblanc Manufacture Calibre MB R200 is revealed through the sapphire crystal caseback. This is a column-wheel vertical clutch chronograph movement with automatic winding, traversing balance bridge, 40 jewels, and a screwed balance wheel which oscillates at 28,800bph, or 4Hz. Two barrels offer a generous 72-hour power reserve, and the movement is well-decorated with circular graining on the base plate, Côtes de Genève on the bridges, bevelled edges, blued screws, and golden wheels. Although this is the same movement used in previous Rieussec models, for the first time it will be certified by the arduous Montblanc Laboratory Test 500. This test lasts 500 hours and checks the watch assembly, accuracy, resilience of the functions under real-world use, general performance, and water-tightness. 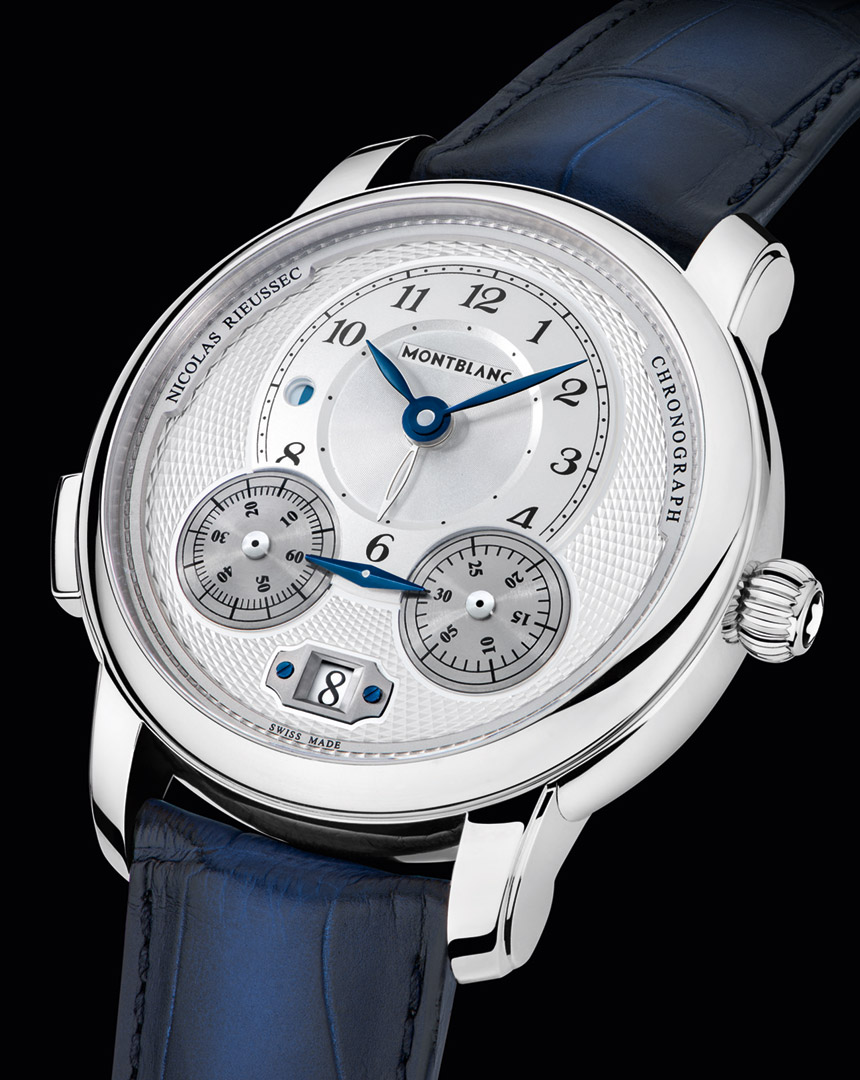