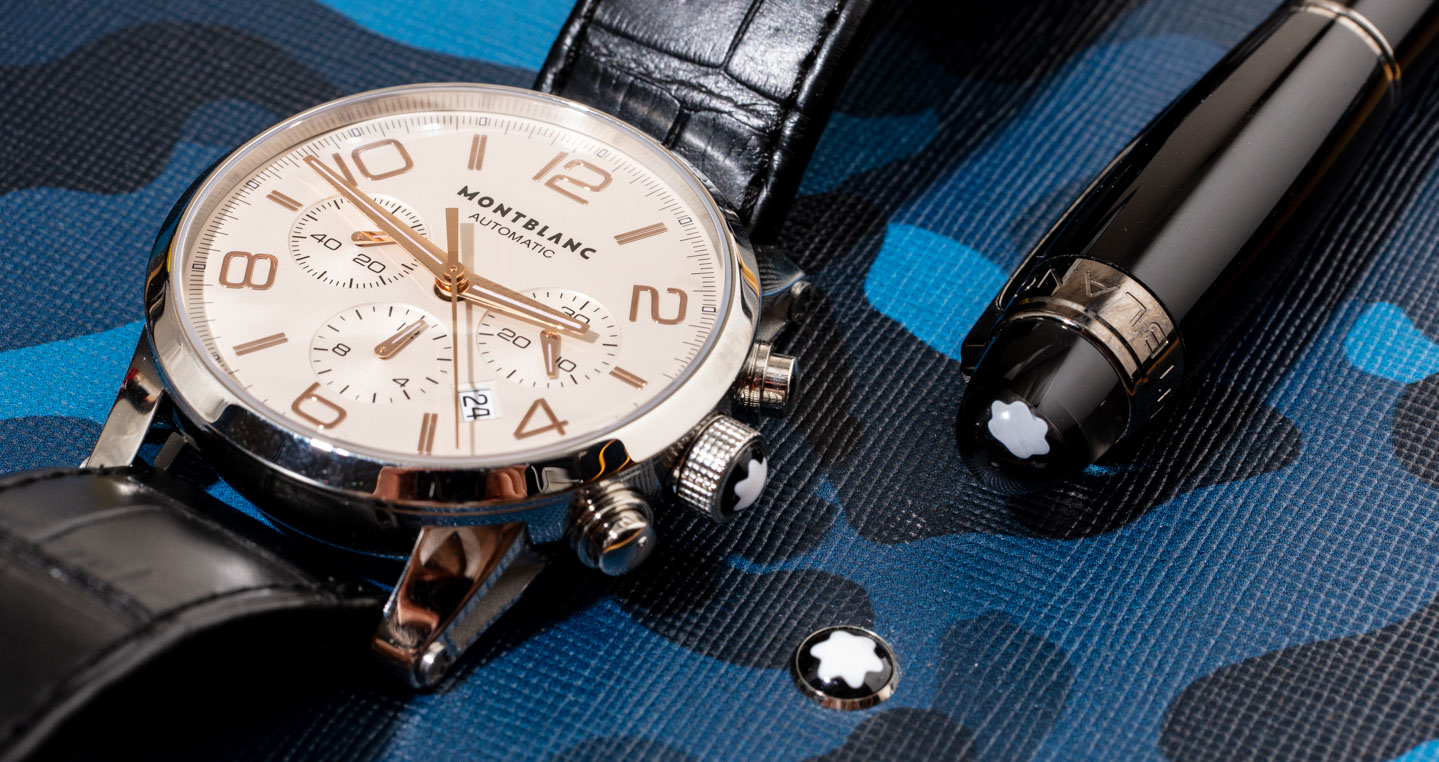 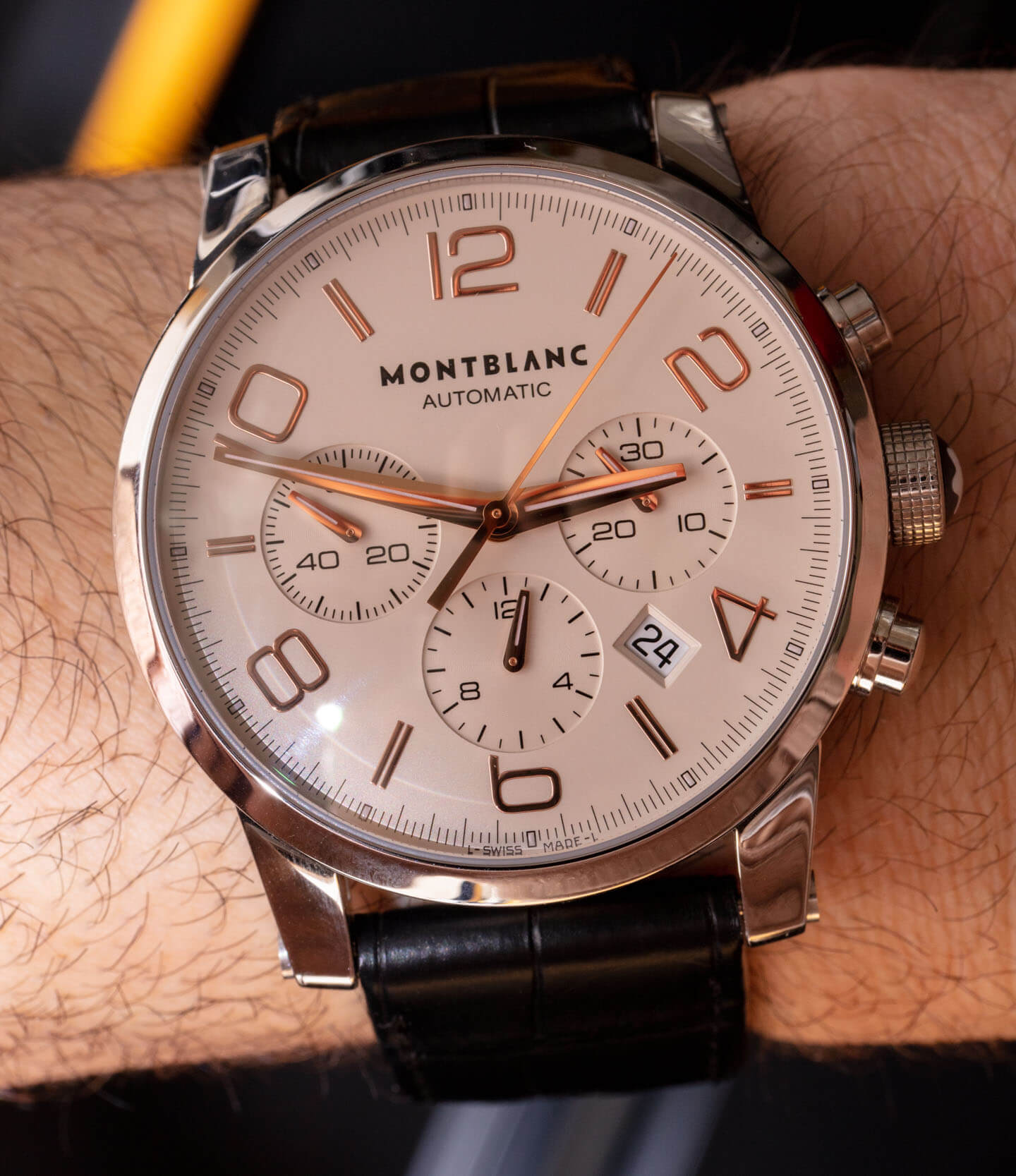 This aBlogtoWatch No Longer Made article is brought to you by ShopWorn.com. ShopWorn’s slogan is “It’s Not New. It’s Not Pre-Owned. It’s Shopworn.” Shopworn purchases unsold, previously handled watches from authorized dealers that may have used them as display models or are trying to clear out older inventory. ShopWorn’s team consists of luxury watch industry veterans, and ShopWorn warrants that it carefully checks each watch it sells, one-by-one. ShopWorn’s website is a testament to this fact, as it doesn’t clutter its pages with endless stock, preferring to showcase a rotating collection of “shopworn” watches, jewelry, and other accessories. Browse for yourself at ShopWorn.com.

It was circa 2004 when I first began wanting this generation of Montblanc Timewalker — which is around the time it first debuted. Designed for a modern working professional in one of the world’s major metropolitan cities, I just happened to be in graduate school living in San Francisco at the time. Montblanc then was not quite the Montblanc of today. Both then and now, the brand had a dynamic portfolio of watches for various purposes, but visually speaking, the aesthetic was a bit more futuristic and contemporary compared with the heavy retro-vibe of the Montblanc watches we see today. 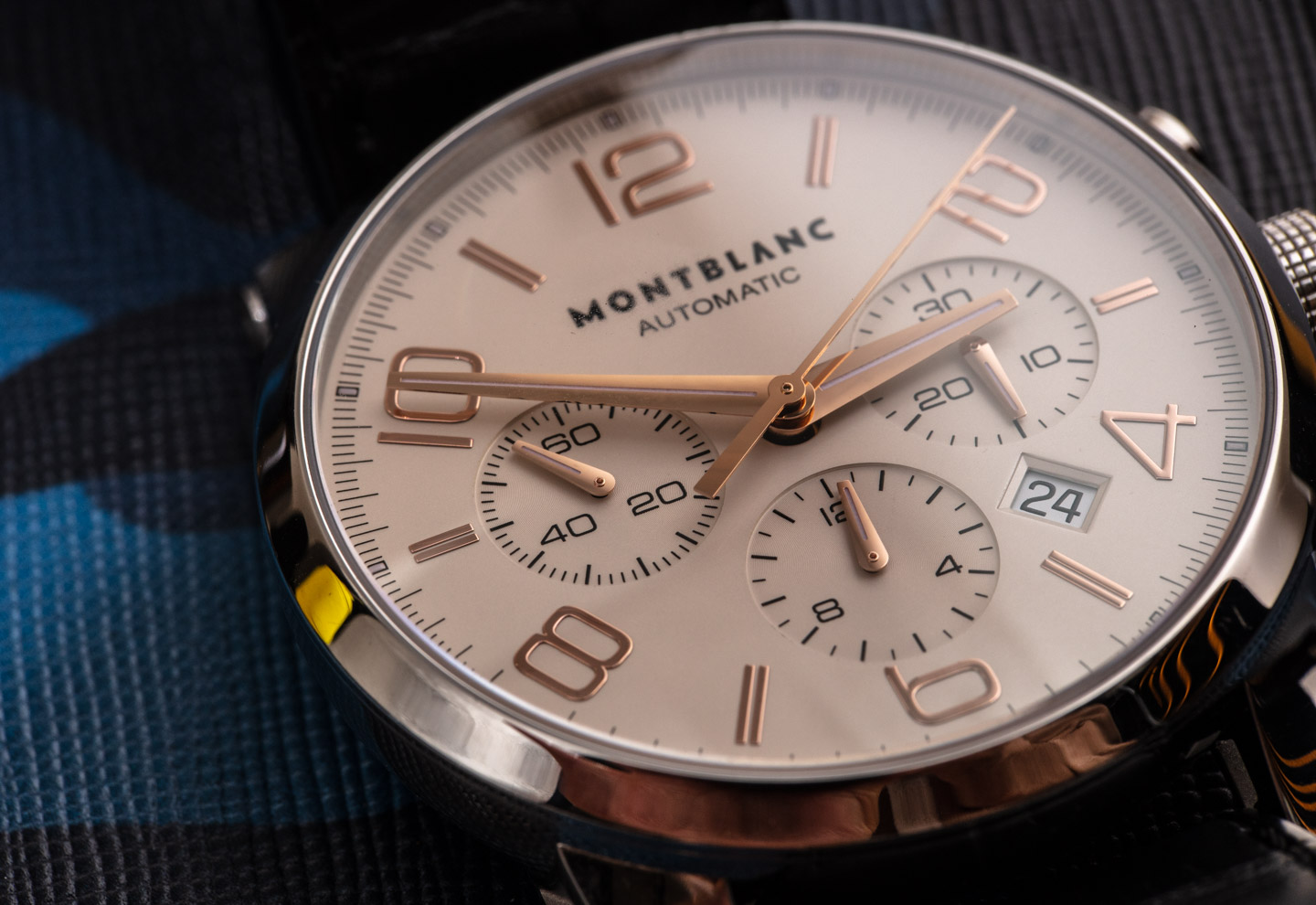 My younger watch-lover self was enamored of the Panerai-like wearing stature and also legibility of the dial, but with a distinctively Germanic twist that combined provocative design with elements of Bauhaus. The Timewalker Chronograph on this reference 101549 was a thing of beauty. At 43mm-wide, it was roughly bowl-shaped with elegant arching lug structures that were also skeletonized. To emphasize the skeletonization, the finishing inside of the lugs was satinized, which contrasted with the mirror polishing of the rest of the case. Note the black and white Montblanc mountaintop star logo inset into the crown.

Despite the aggressive looks, this Timewalker is not a sports watch — it has just 30 meters of water resistance and comes on a leather strap (with a nice crocodile texture to it). I’d call it a bold dress or casual-wear timepiece. The 43mm-wide case is also 14.5mm-thick, with an AR-coated domed sapphire crystal over the dial. Darkness viewing is also not this otherwise very pretty watch’s forte, given the relatively anemic volume of luminant painted in thin strips on the hands and as small blocks on the outer periphery of the dial. 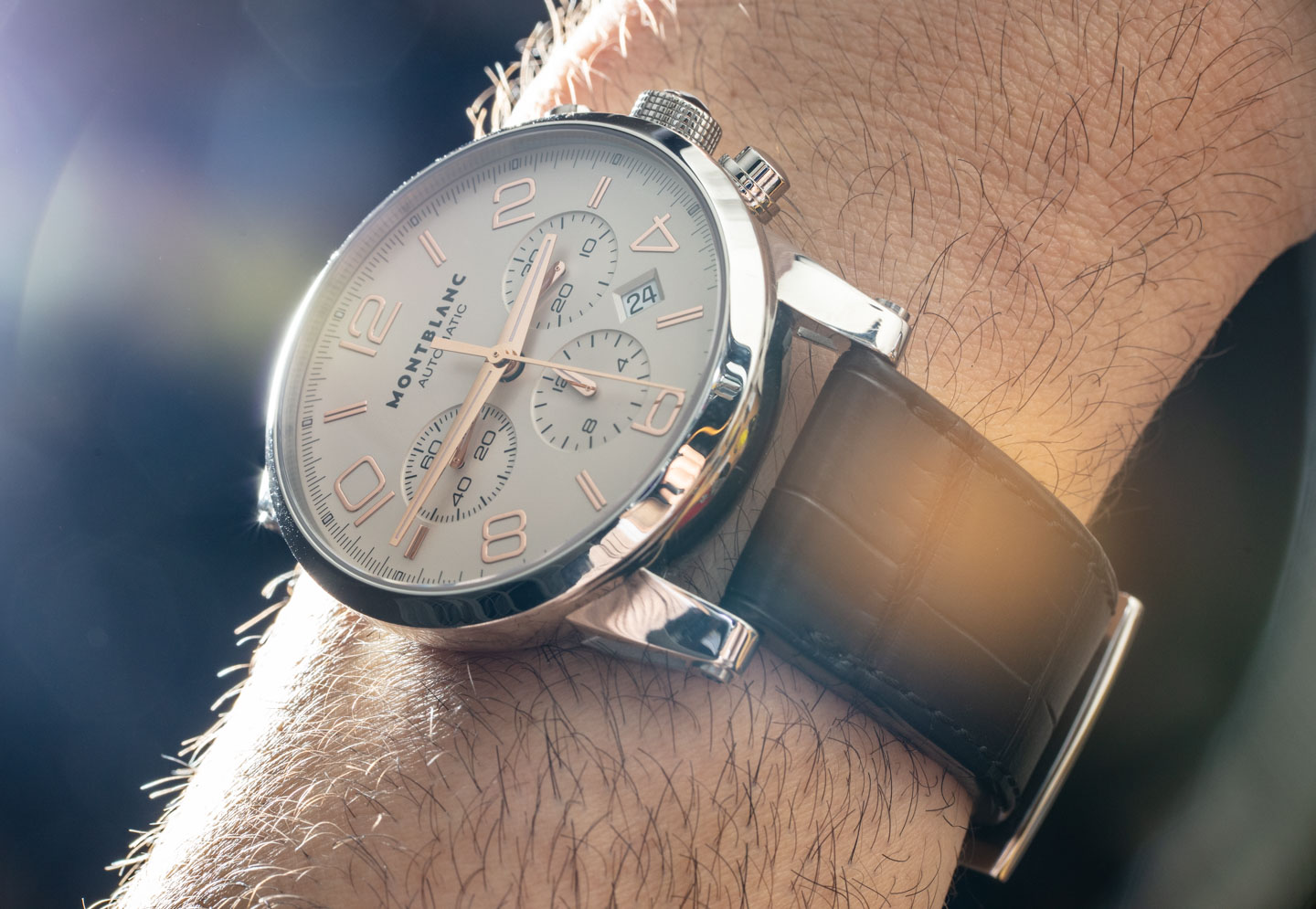 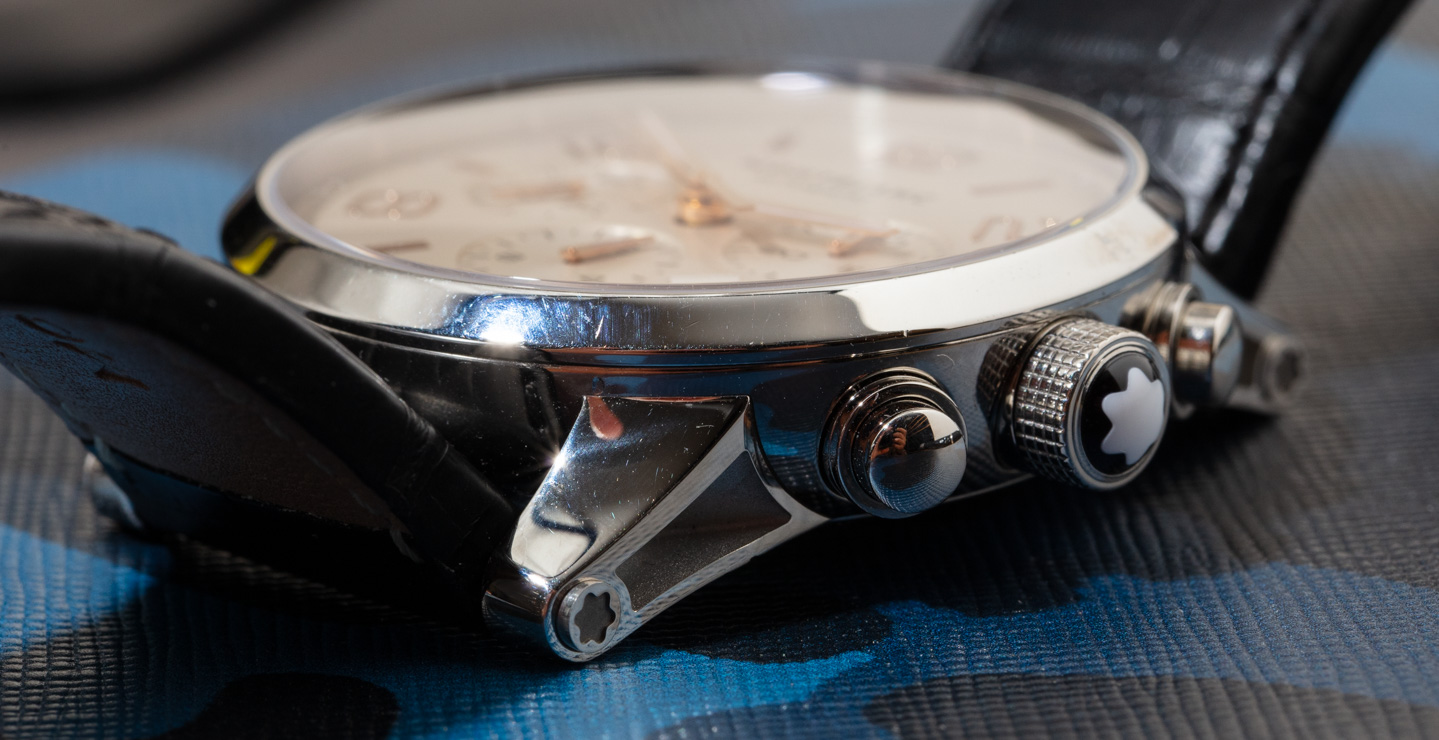 In my opinion, this generation of Montblanc Timewalker proved that a dial didn’t need to be complicated to look beautiful. The crowning feature is the distinctive Arabic hour numerals that revolve in a circular array around the dial making for an attractive yet legible effect. Add to that strong-looking, well-sized hands, and you have a winning combination. The dial is also large enough so that nothing really needs to overlap on itself (much). That means ample room for the eyes to read the time, the subdials, and the date window.

Montblanc produced this particular Timewalker Chronograph model family with a few dial versions, but before this generation of Timewalker case was retired, Montlbanc rendered it in many forms and with different movements. Despite the Timewalker having at least three different chronograph versions, I found this original style of chronograph with the Swiss Made ETA Valjoux 7753 to be the most satisfying. The reference 101549 has a silver dial with rose gold-toned hands and hour markers. Montblanc also produced an all-silver dial that came with a brown strap that I liked a lot. I think black-colored dials were also available. Montblanc even offered an interesting version on a unique metal bracelet that had skeletonized links and black ceramic center links. 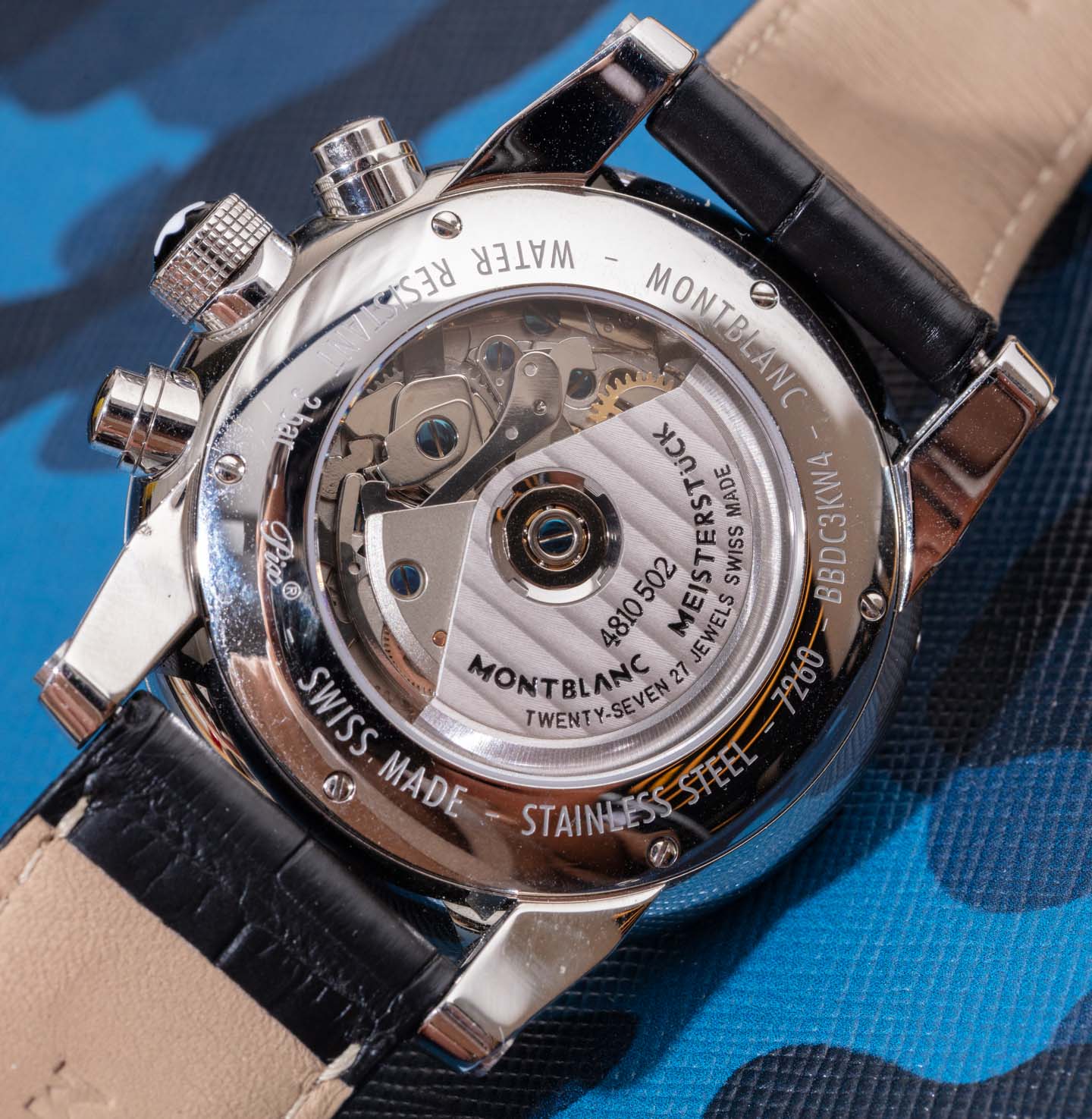 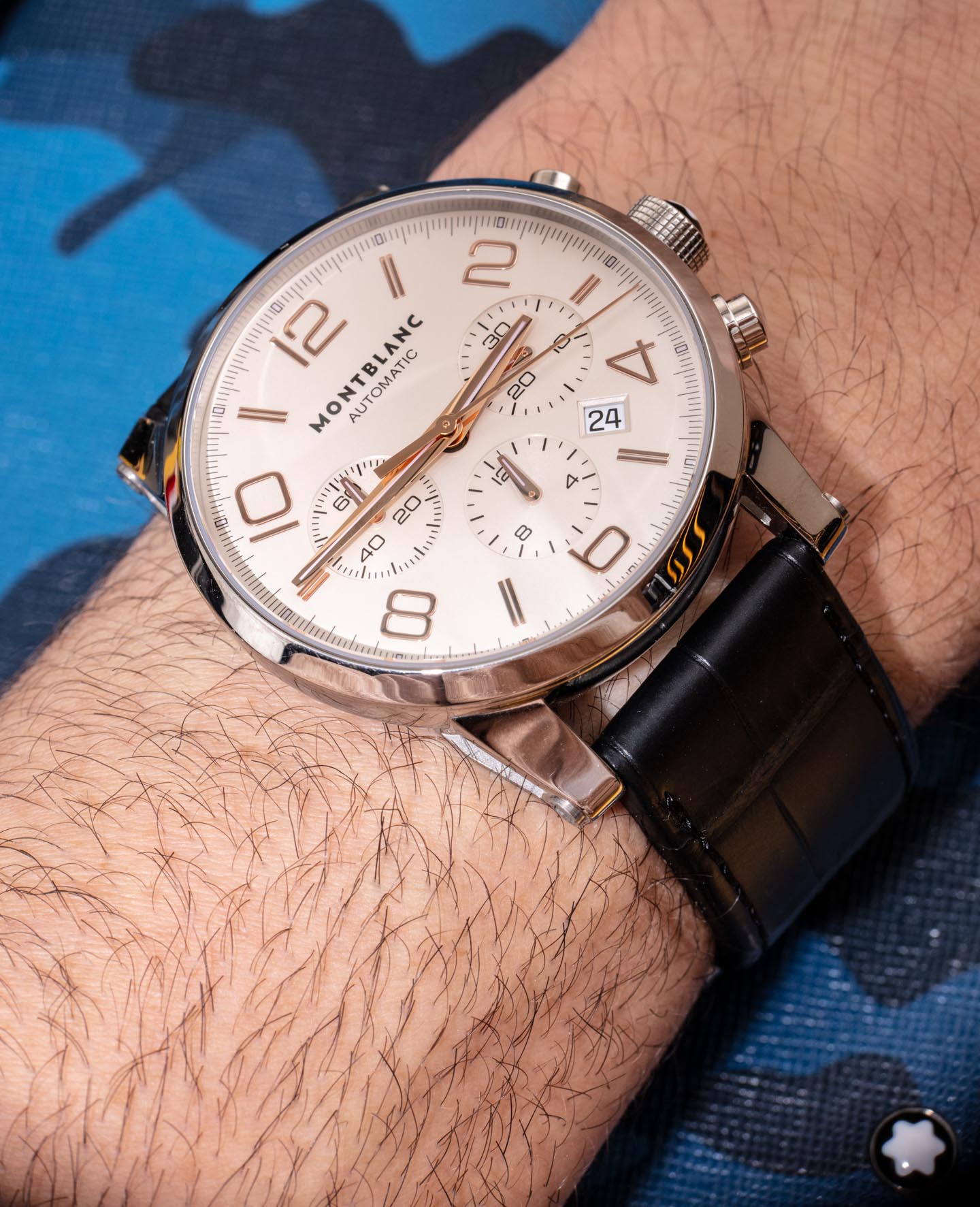 Montblanc called the ETA Valjoux 7753 automatic movement inside the watch the caliber MB 25.02. The 7753 is a different version of the 7750 with the orientation of the chronograph subdials in a “tricompax” array. It also has an inset date-corrector pusher located at 10 o’clock on the case. The movement operates at 28,800 bph with about 46 hours of power reserve. Montblanc opted for a medium-decoration version of the movement, which includes a Geneva-striped, polished applique on the automatic rotor and otherwise unfinished movement except the use of blued-steel screws. 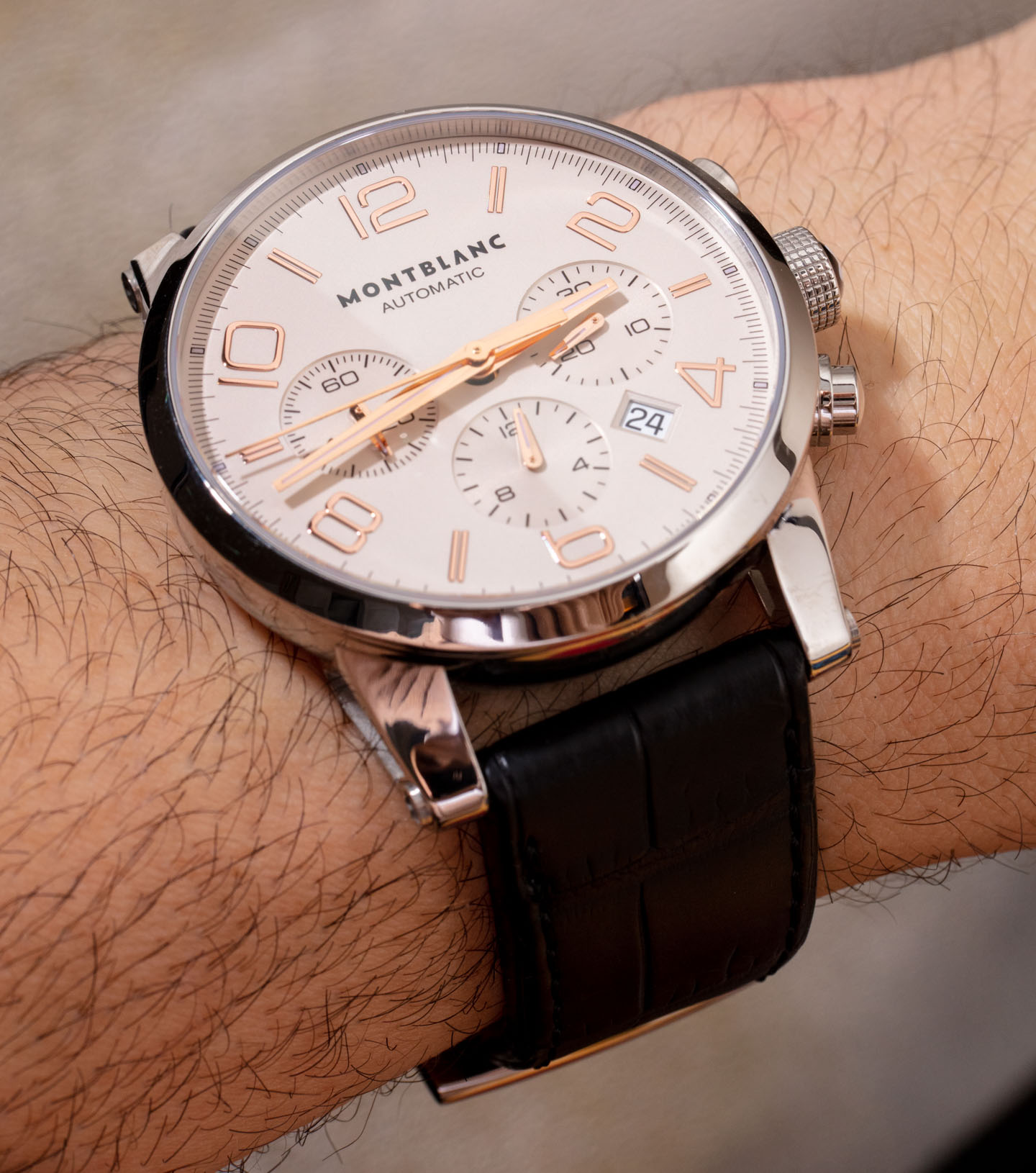 What keeps the Timewalker Chronograph 101549 such an appealing watch more than 15 years after its debut is both the timeless appeal of its theme (a general-purpose urban city time-teller) and its attention to detail. Montblanc didn’t need to try so hard, but they did. Notice the use of custom Montblanc logo screws in the lugs, the lug skeletonization itself, and the matching design of the strap buckle. All of these are the types of little details that make for a satisfying artistic experience, and what help tools become objects of beauty. Original price for this reference 101549 Montblanc Timewalker Chronograph was $5,600 USD.

This aBlogtoWatch No Longer Made article was brought to you by the sponsor ShopWorn. You can get timepieces like this and other no longer made watches from the trusted professionals at ShopWorn.com here. Use the code “ABLOGTOWATCH”  at checkout for 20% off.
Advertising Message