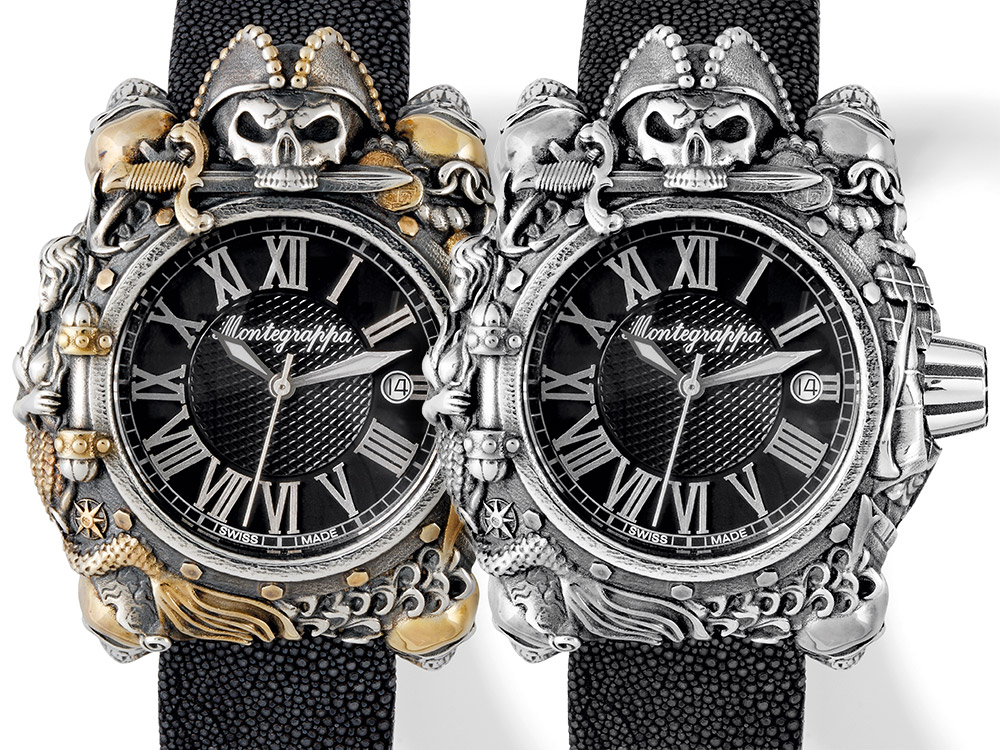 I really want to meet the people who buy and wear Montegrappa‘s flamboyant watches such as the Montegrappa Pirates watch. This is the third and so far most accessibly priced in what has become a series from the Italian pen-maker. The Montegrappa Pirates watch case is crammed with almost comically familiar pirate motifs in high relief, and its release just ahead of the Pirates of the Caribbean: Dead Men Tell No Tales film is probably not coincidental. 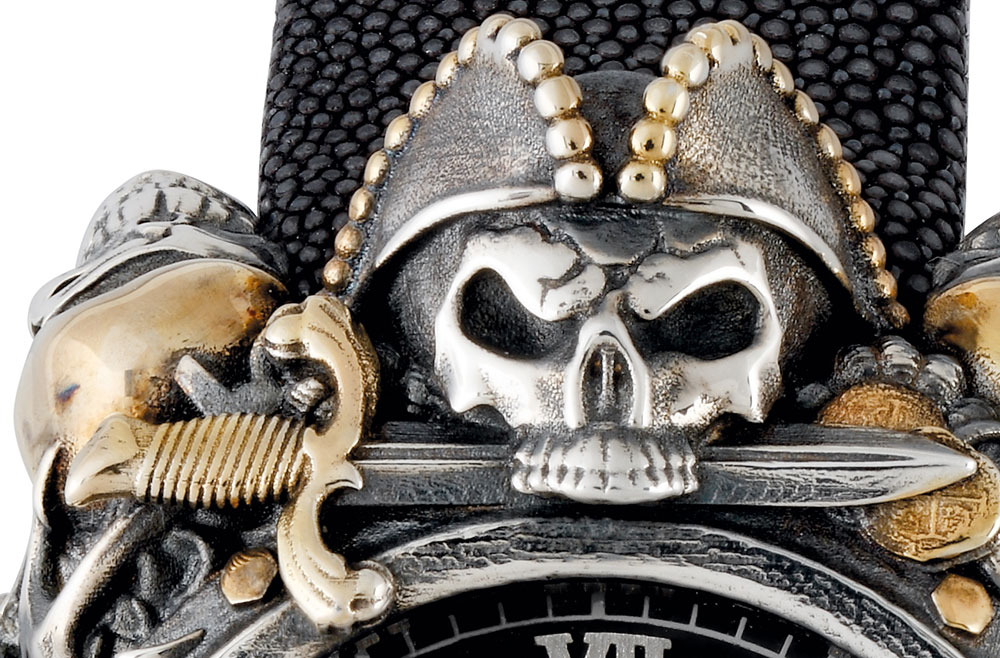 It began for Montegrappa with the Chaos watch (hands-on here) that was covered with three-dimensional skulls, snakes, and “roads of fire,” and was apparently designed by Sylvester Stallone. The follow-up was its thematic antithesis, though right in line with the over-the-top nature, with the angel-themed My Guardian Angel watch (hands-on). These watches are lighthearted takes on their respective themes – as if they could be anything else – and the Montegrappa Pirates returns once again to the cartoonishly macabre side with skulls, daggers, and references to buccaneer lore like a mermaid across the whole left-hand side of the case. 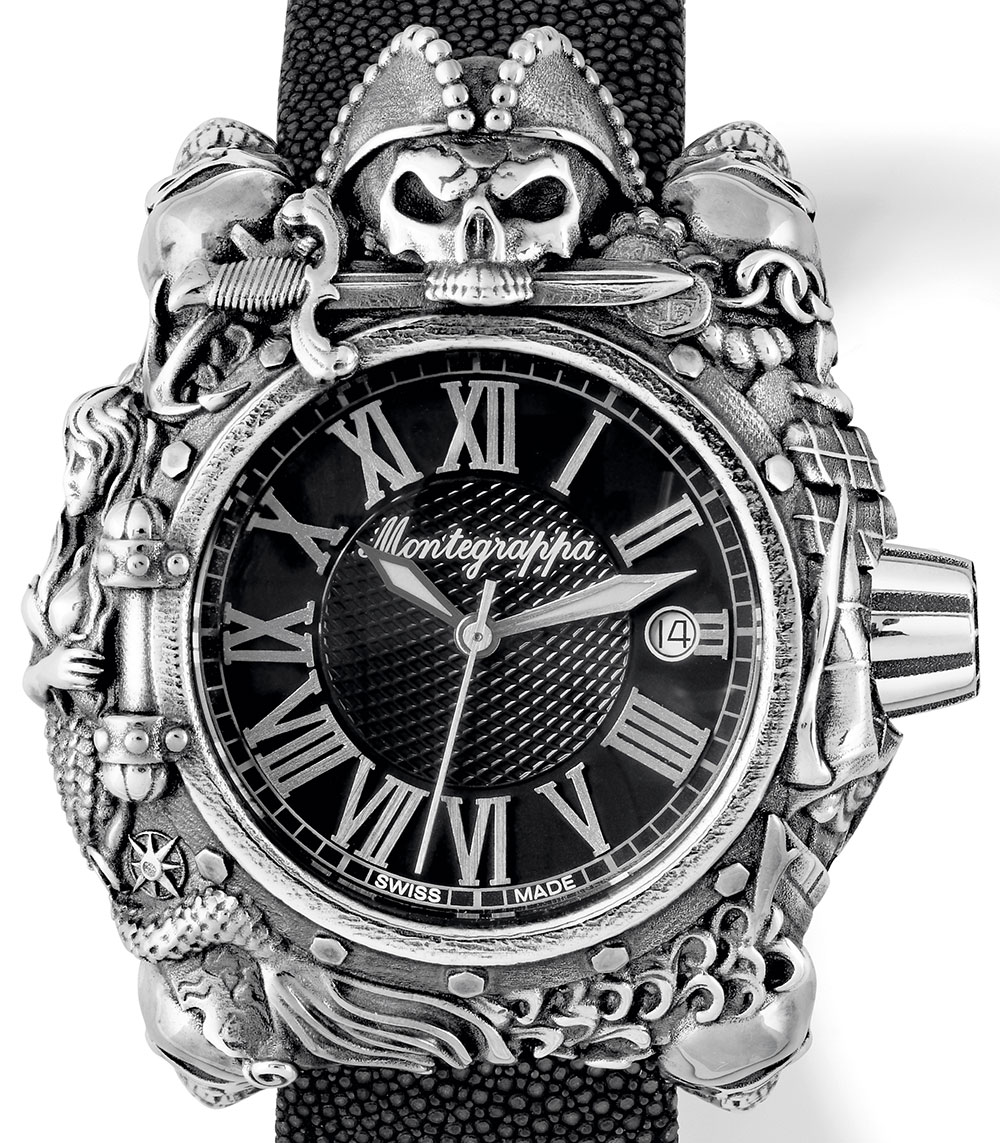 The Montegrappa Pirates watch’s case is 43mm wide in die-cast sterling silver (a material we don’t actually see used for watch cases too often) and comes in two versions, as you can see in the images here. One version is all silver, and the other is silver with vermeil highlights. Vermeil, if you didn’t know, means silver gilded (coated) with gold. We are satisfied that the case’s 100m water resistance rating is sufficient and appropriate for the watch’s nautical theme.

Inside, the watch is powered by the trusty ETA 2824 automatic movement, and we expect a solid case back as on the other watches in the series, though the brand does not provide images or information on that. The stingray leather strap matches the overall theme well and we can expect it will probably include a buckle that matches the case. As with the Chaos and Guardian Angel watches, the Montegrappa Pirates has a corresponding pen from the brand with matching designs (sold separately). 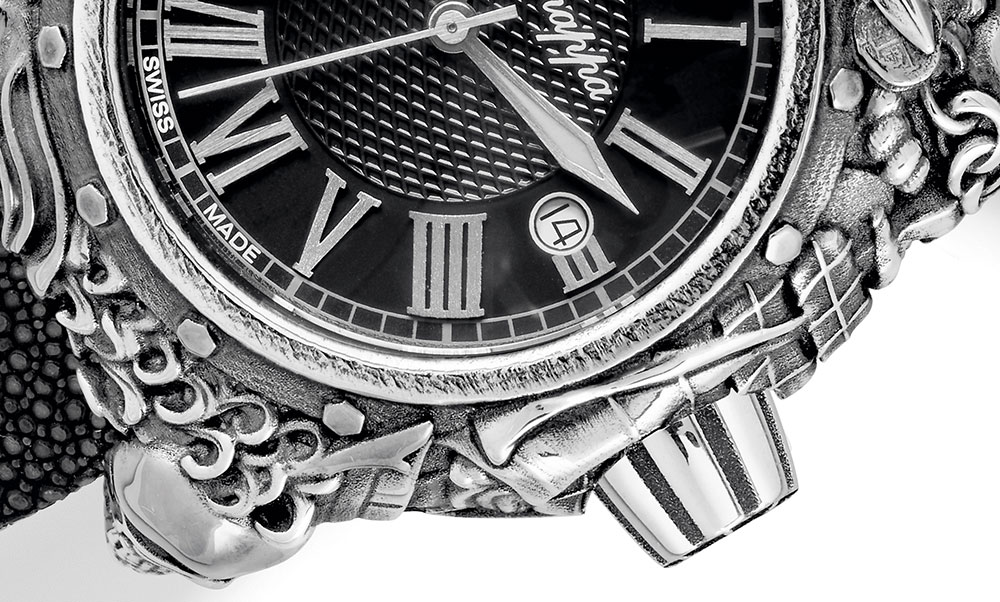 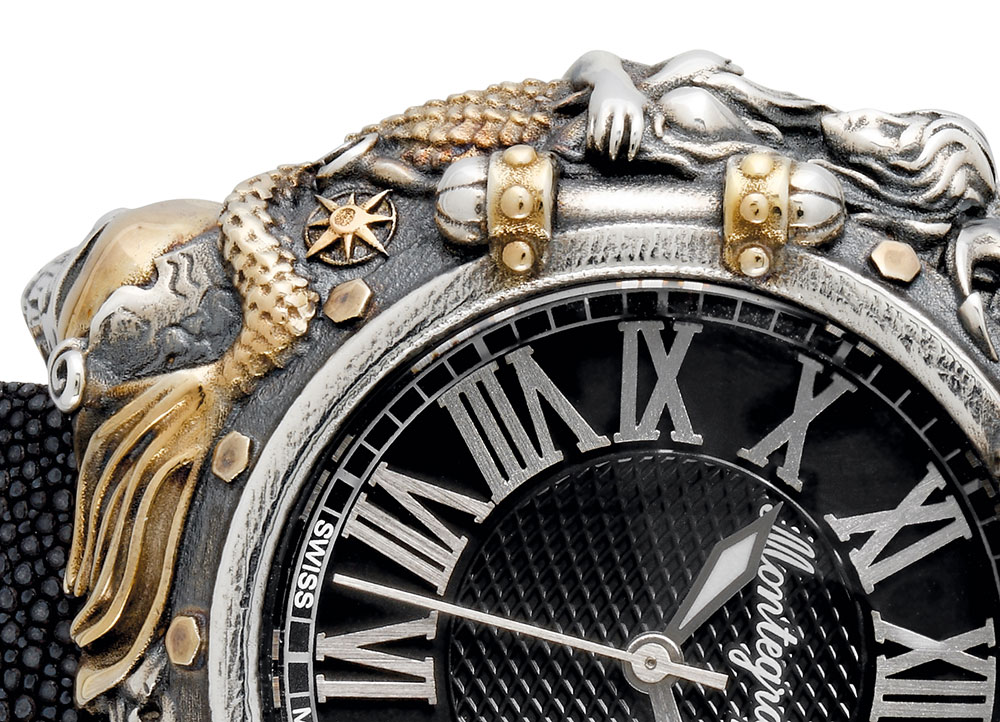 The dial and handset are very similar, if not identical, to that of the Chaos watch with brushed Roman numerals and sword-style hands – though Bell & Ross’ BR01 Burning Skull “Tattoo” watch (hands-on) one-upped Montegrappa on that front by using hands actually shaped like pirate swords. Above 12 o’clock on the case, the “Jolly Roger” skull with a dagger in its teeth is the centerpiece of the design. Four more skulls form the lugs, but they are hard to see in the brand’s images here. The dense decoration includes a compass rose, mermaid, sails, ropes, chains, and a ship’s wheel on the screw-down crown (again, not visible in these images) – see what other pirate stuff you can find. 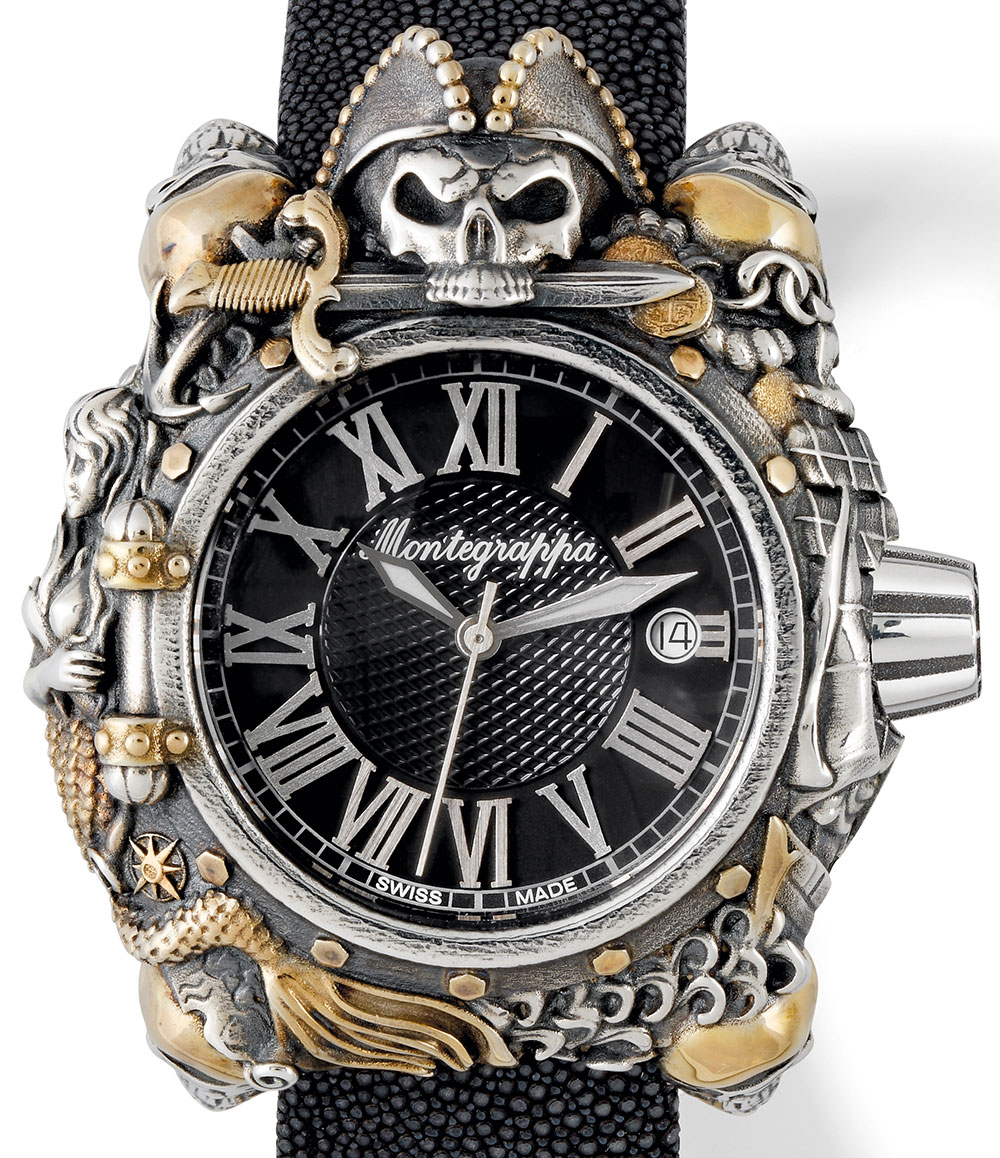 Pirate watches are actually a thing, it seems. They are mostly a subgenre of the inexplicable popularity of skull watches. What’s the deal with skull watches? I want to say in a Seinfeld voice (there really are a lot of them – just see our Watches with Skulls topic page). What kind of lifestyle or personal style do these “badass” but luxury objects fit into, and what is the wearer trying to communicate? Seriously, I don’t get it, as I feel the symbol has lost much of the “edginess” it might have had decades ago. Maybe that’s just me.

With that said, these will be fun watches for the right people (eccentricity required) – possibly those who already have the Chaos and My Guardian Angel watches. The Montegrappa Pirates watches will be produced in limited editions of 88 pieces each. The version in silver will have a price of $4,200 and price for the silver with vermeil accents will be $4,500. Whether or not it’s your cup of tea, it’s nice to have more quirky and wild options in this price range. Please submit your pirate jokes in the comments below. montegrappa.com