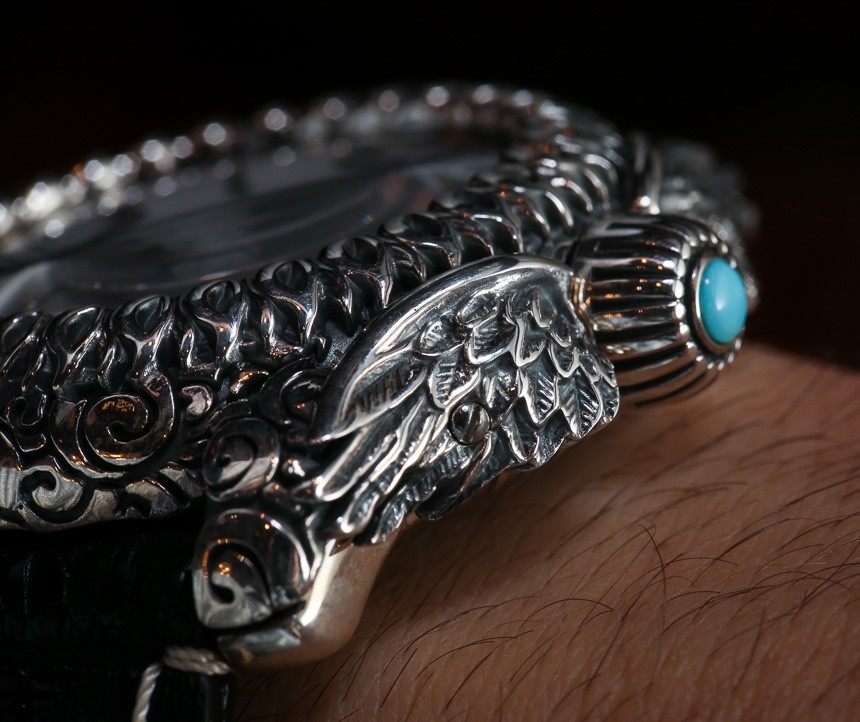 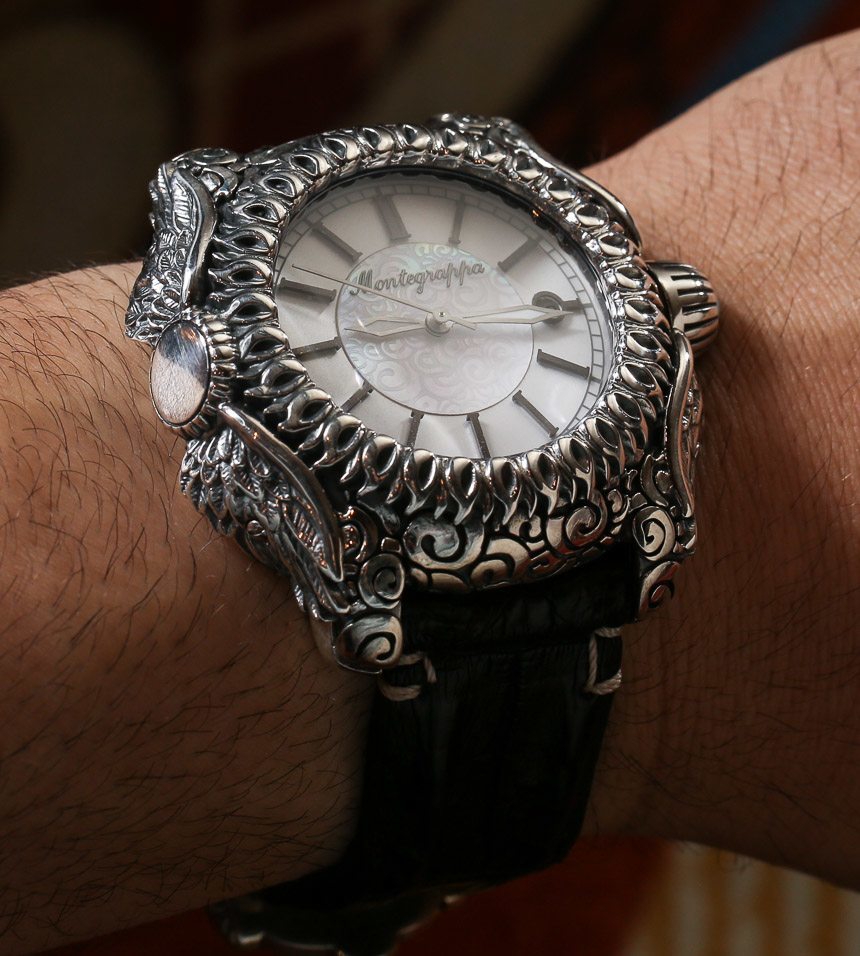 This year, Italian watch and writing instrument maker Montegrappa follows up its Chaos collection of watches, pens, and accessories from 2013 with the 2014 “My Guardian Angel” collection of watches, pens, and cufflinks. At the Couture 2014 watch and jewelry show, aBlogtoWatch went hands-on with these pieces. In a sense, the Montegrappa My Guardian Angel watch is the thematic opposite of the Chaos watch with its “light” and angelic themes, in contrast to the skulls and snakes of the Chaos watch and related items.

aBlogtoWatch went hands-on with the Montegrappa Chaos watch here. Available in sterling silver or 18k gold, the Chaos watch was a limited edition item that came in four versions imbued with a lot of personality. To call it polarizing is an understatement, but those who really disliked it seem to not understand the point. Montegrappa is very dynamic in its ability to produce extremely classic writing instruments, but also completely silly items that don’t take themselves too seriously. An example is the 2014 Montegrappa CASH pen collection that has dollar signs on it and has a diamond-like stone at the end. It comes in a box that looks like a stack of money and, according to the brand, was originally titled the “Montegrappa Motherfucker” pen. 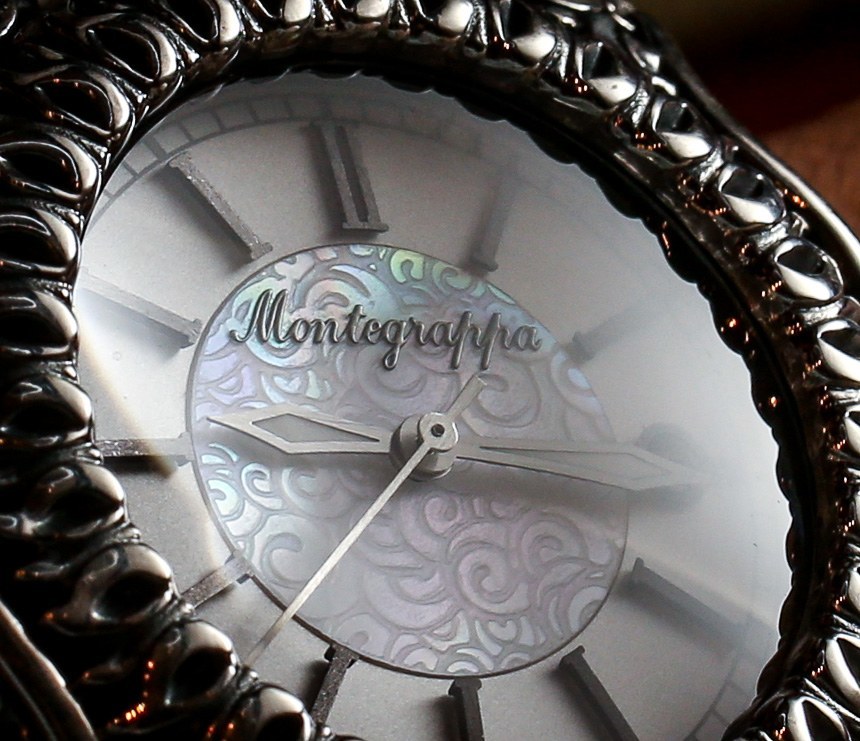 Thus, there is a degree of boldness and humor at the brand, which exists in tandem with their rather serious outlook on quality and design. While you might dislike some of what they do, the quality of it is pretty good. You could easily go your entire life with “Montblanc conservative” style Montegrappa items and pens and ignore their more… entertaining selection of products, such as the Chaos and My Guardian Angel collection products. So what is the opposite of a Sylvester Stallone designed “bad-ass guy” watch and pen set with skulls and snakes all over it? One with angels and clouds on it, of course.

The real design imagination for the Montegrappa My Guardian Angel collection comes in with the pens. There are various versions, and they are priced up to $85,500 for the rollerball version of the My Guardian Angel pen in all gold with the full set of “climbing and armored angels” around the body. Like the Chaos pen and other more “high-end novelty” style writing instruments Monegrappa makes, the My Guardian Angel pen isn’t exactly totally ergonomic, but no one is going to be penning their last will & testament with one of these. Come to think of it, this is the exact type of pen I want to use when hand-writing my will. 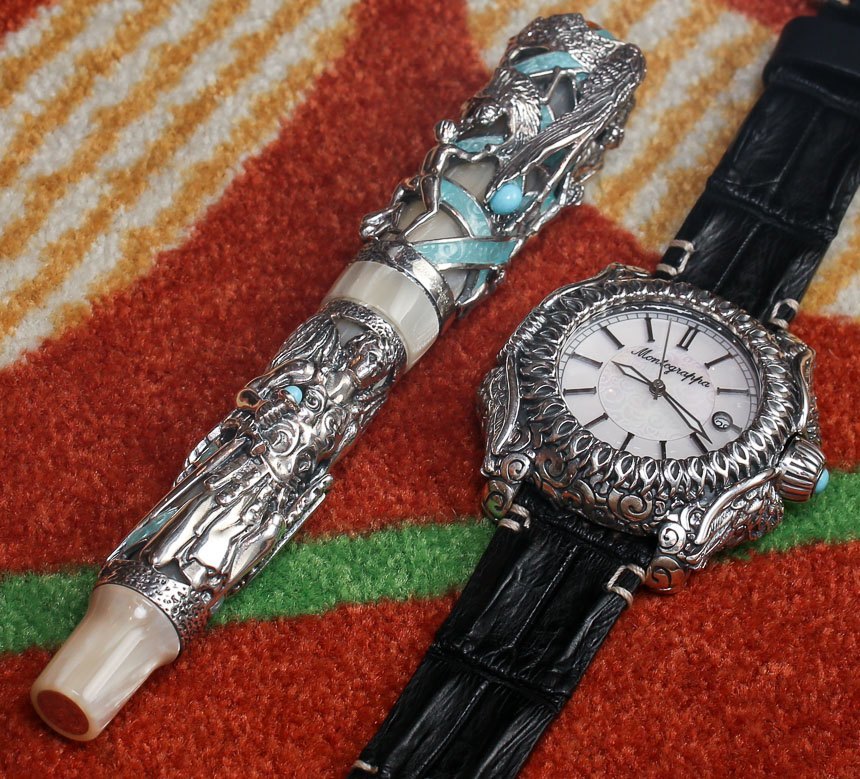 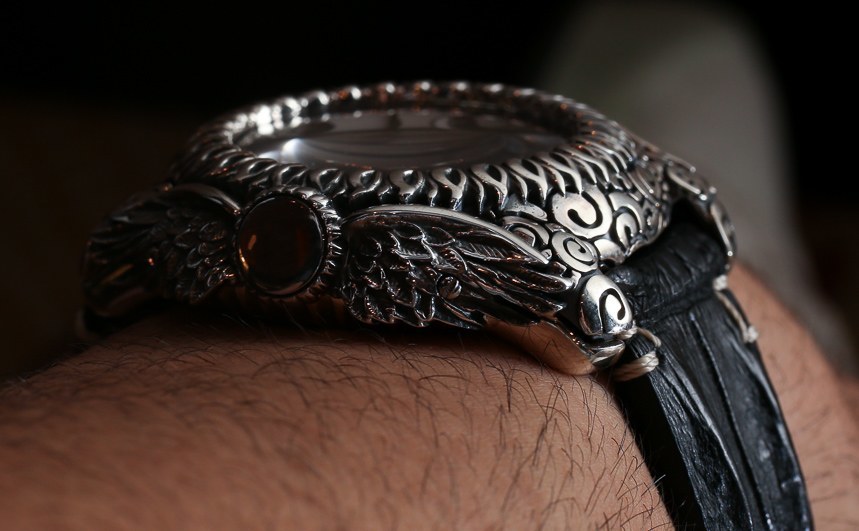 Like the pen design, the watch case is a bit over the top, and intentionally so. Montegrappa is under no illusions that the My Guardian Angel watch has the classic point of a Patek Philippe or the admirable dedication to utility of a Rolex Submariner. This watch is a piece of functional art or jewelry and the emotions that go with it. Remember, this is the same company that made watches with Batman on them. So if this watch looks a bit silly compared to a traditional tool or dress watch, that is because it is. You need a sense of flamboyance in your personality to pull one of these off, for sure.

If you don’t have the ability to wear something that communicates so loudly on your wrist, that is fine. Montegrappa appreciates the feedback as much as watch lovers like us enjoy offering it. While precise measurements aren’t available at the time of writing, the Montegrappa My Guardian Angel watch likely comes in the same 43mm wide by 54mm tall case in both sterling silver and 18k gold. 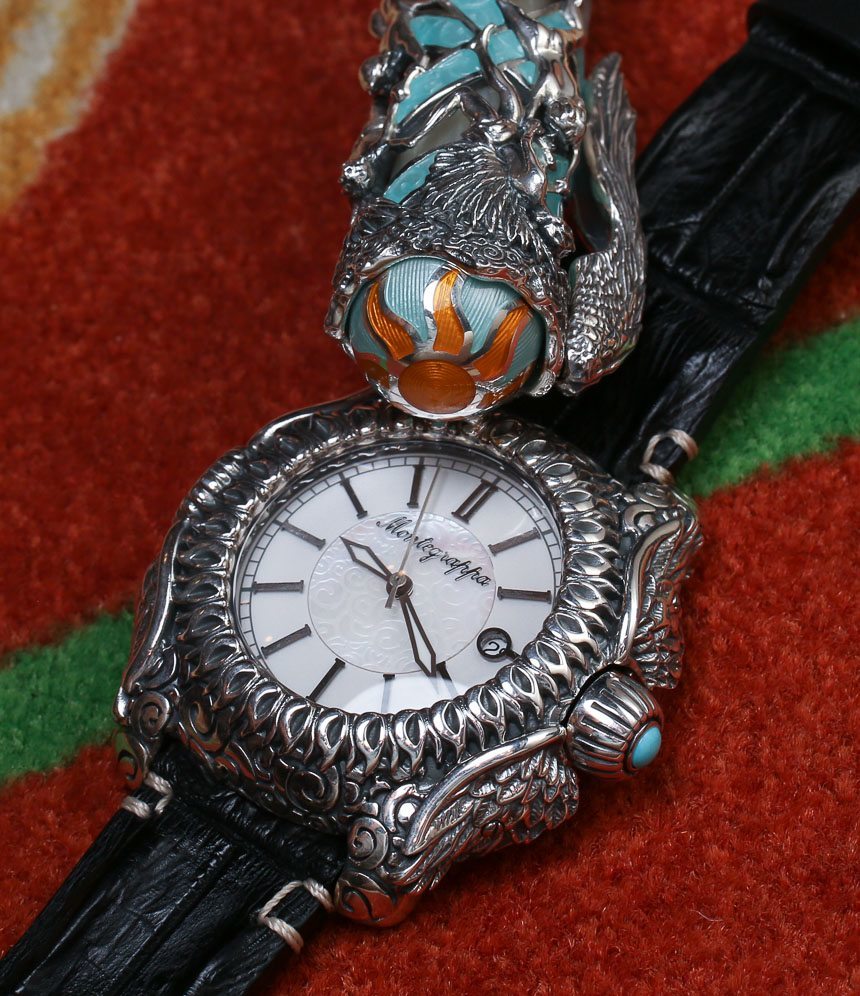 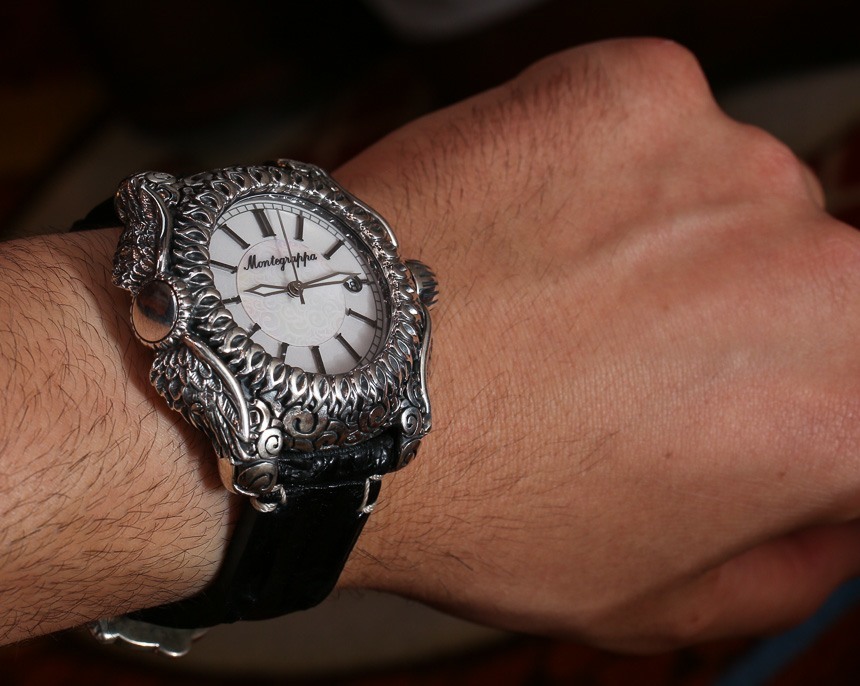 Rather than having the skulls and snakes motif of the Chaos watch, the Montegrappa My Guardian Angel has angel wings and clouds as engraved case decoration. The dial is ringed with a sun flare style design which is associated with the sun and diving light. The dial is similar to the Chaos watch, but a bit simpler and lighter here. I really like the swirly could patterns engraved in the central part of the dial which is done in mother-of-pearl.

What is interesting is that the My Guardian Angel watch doesn’t actually have any angel motifs on it aside from wings. Actually, since the caseback on this prototype model is blank, there may be something here for the final version, but as of now, the watch doesn’t have creepy little crawling (literally) angels on it, like the pen does. Though it would have been cool to have the sword-bearing angel character somewhere on it. 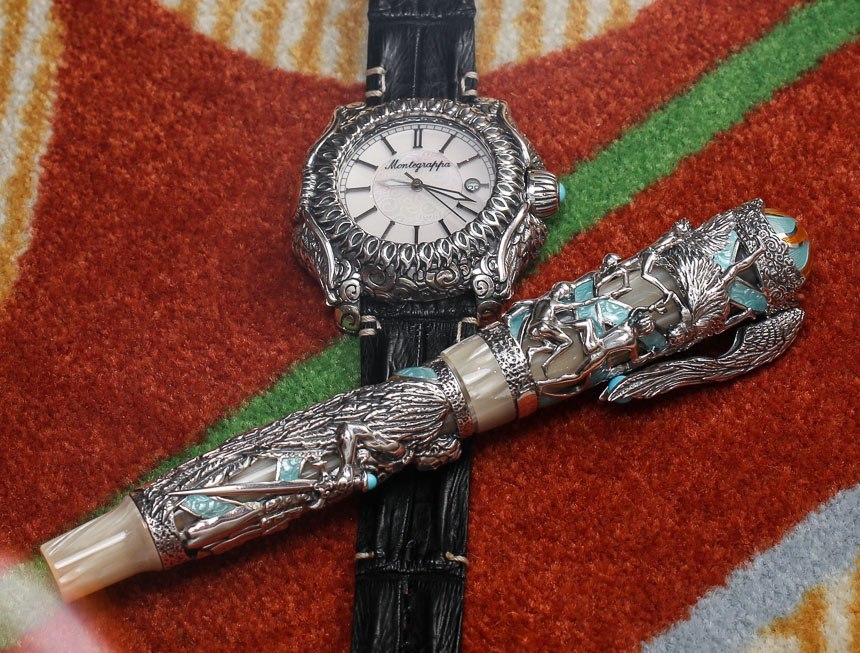