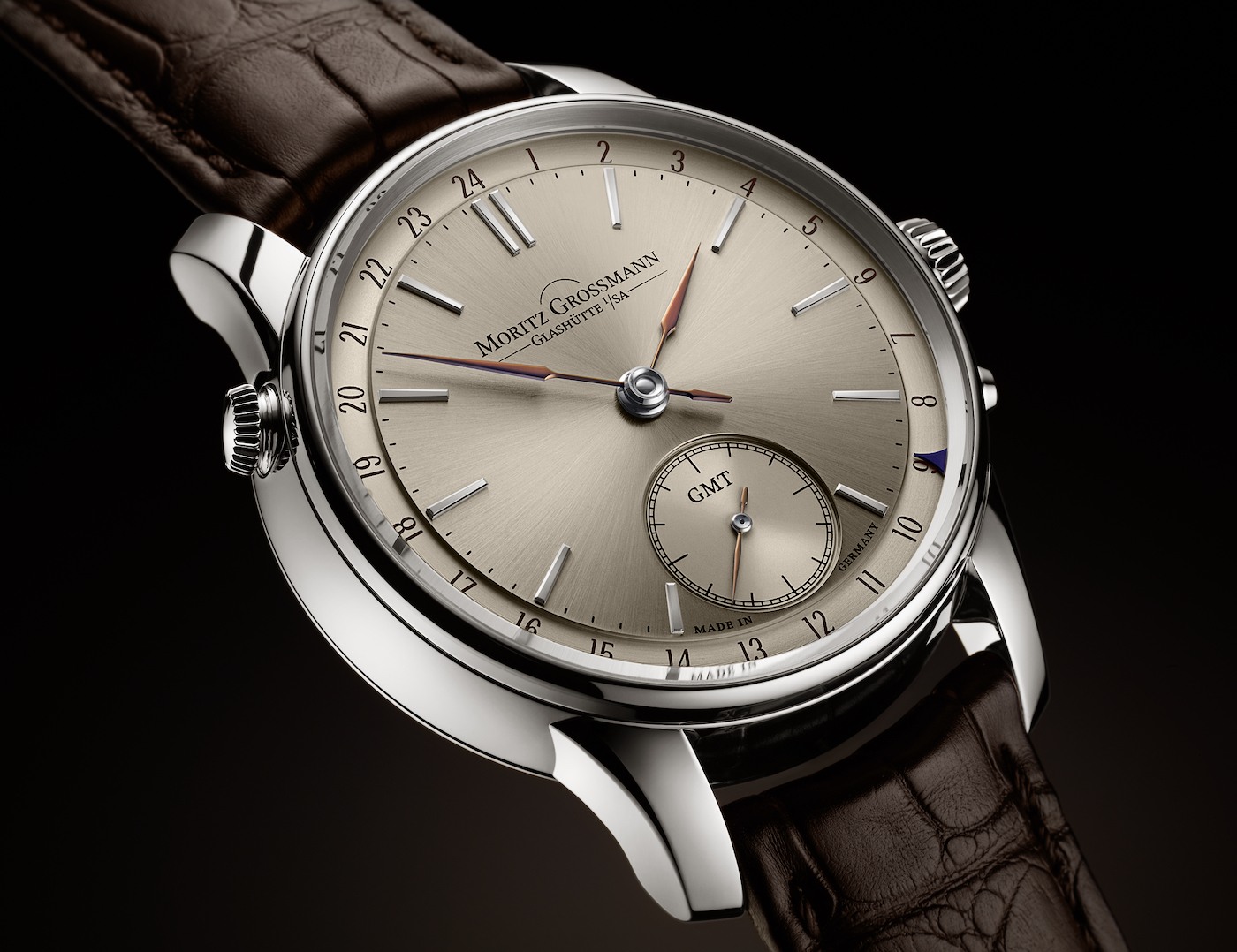 Well, they’ve finally done it. This latest offering from Moritz Grossman isn’t perfect, but it’s without a doubt my favorite piece from them. Ever. And that’s saying something. I’m a massive fan of German watchmaking, and I have been silently imploring this Glashütte company to come up with something that tickles my fancy. May I present to you the Moritz Grossman GMT watch.

This release sees three variations of their first GMT watch hit the market simultaneously. Honestly, only one of the three really does it for me, and that’s the one I put at the top of the page. The dial is listed as champagne — in lay terms, elegant brown. An uncommon warm hue, set against a white-gold case with annealed steel hands? Yes, please. Karl Moritz Grossman was one of Glashütte’s finest. He found his way to the small Saxon town following an inspirational stint in La Chaux-de-Fonds. There he became something of a local legend. His crowning glory may have been the foundation for the watchmaking school that still stands and operates in Glashütte today. After his sudden death in 1885 (at only 60-years-old), his company was liquidated. His name remained dormant until Christine Hutter brought the company back to life during the financial crisis of 2007-2008.

Just over ten years later, the company makes around 200 watches a year and employs just shy of 50 people, globally. With such a restricted output so soon after foundation, it is perhaps no surprise that it’s taken me a while to find a piece that really speaks to me. I’m glad to say the Moritz Grossman GMT watch is the first that does. I’ve always liked the movements of Moritz Grossman. Crafted from German silver in their idiosyncratic “2/3 plate-” style, the most strikingly individual thing about them is the use of burgundy, rather than blue, screws. This is not particularly traditional, but a nice personal touch that creates an unusual palette visible through the display caseback.

The movement that powers the Moritz Grossman GMT is the Caliber 100.83. The addition of a second time-zone indicator around the outside of the dial provided the movement designers with an interesting challenge that they overcame handsomely. The adjuster mechanism is simple, and the second time zone can be skipped in one-hour increments, forward or backward, by utilizing the crown at 10 o’clock. The sole thing I dislike about this watch’s display is the hour “hand” of the second time zone. The marker completely obscures the hour it is supposed to be highlighting. Yes, it is simple enough to interpret the time by omission, but why they didn’t use a framing device (something like we’ve seen before in the Roger Smith Series 4) instead of a block arrow is beyond me. As with all Moritz Grossman timepieces, the price will be the sticking point for many. Here we have a small independent brand producing mechanically great watches with an often-challenging aesthetic, and very little name recognition. It’s a tough sell. Running into five figures puts you in some pretty esteemed company. That’s especially true if you’re from Glashütte. The factory stands on the opposite side of the train tracks from NOMOS Glashütte and Tutima. In the near distance, both A. Lange & Söhne and Glashütte Original glare back at their new rival.