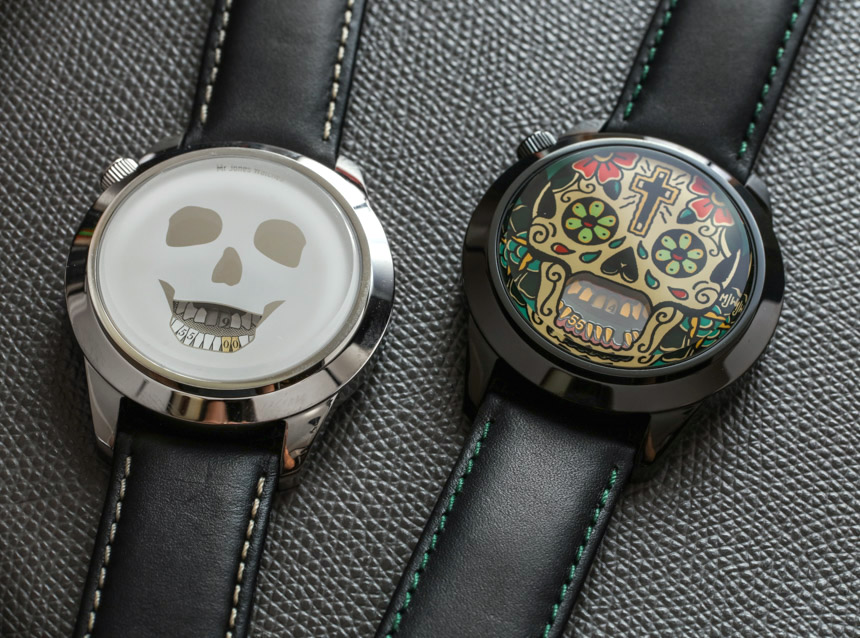 London-based watch designer Mr. Jones Watches has recently released two “XL” versions of their popular The Last Laugh and Last Laugh Tattoo watches. These new 45mm wide models are arguably a lot more masculine than the brand’s 37mm wide versions of the popular and affordable skull-faced timepieces. More artistic than they are practical, this is exactly what a lot of people want in a traditional timepiece when expressive value can often trump utility value. 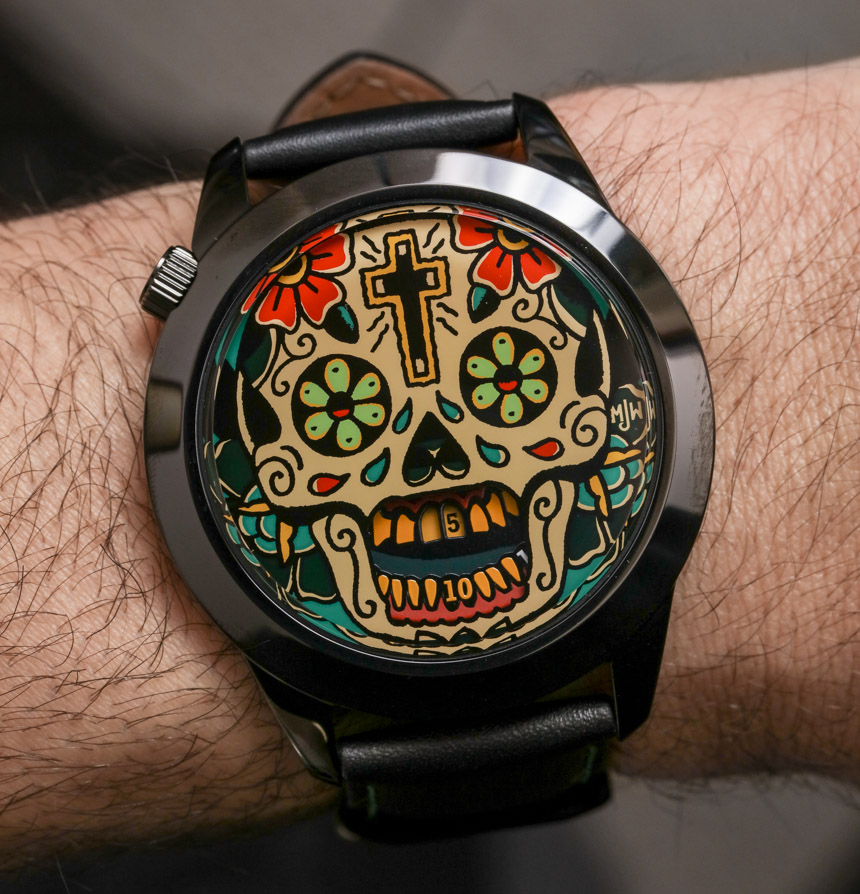 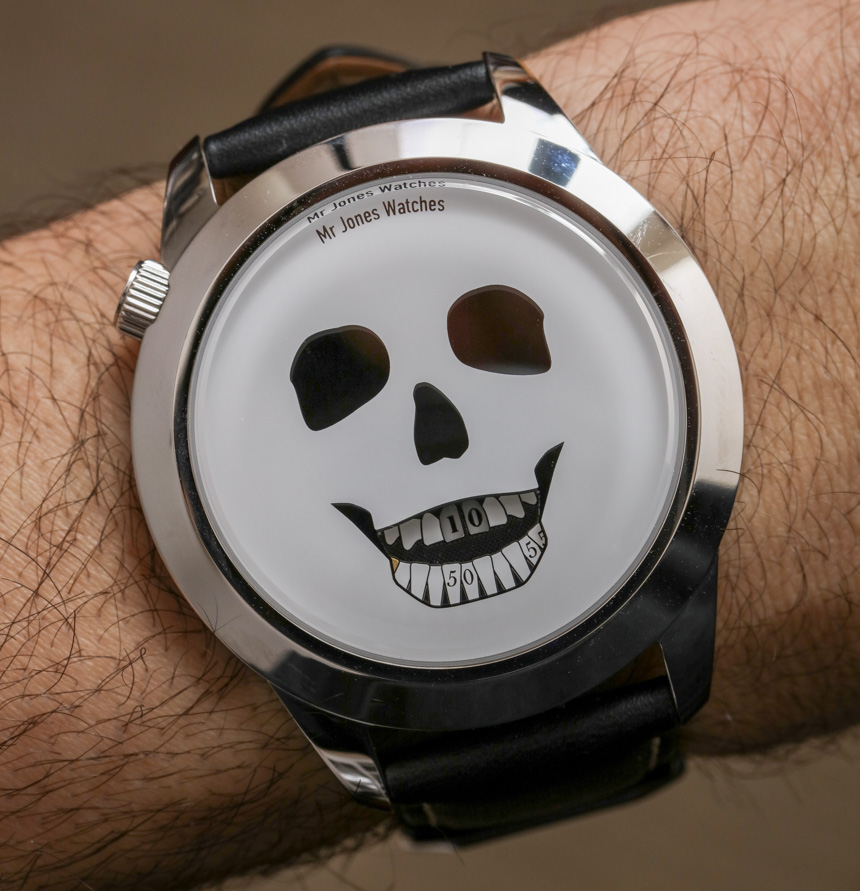 Allow me a brief aside to offer some context. For generations watchmakers have supplemented the work of practical watch products with those which heavily lean on the artistic side. This often means utilitarian sacrifices in exchange for originality, aesthetics, and the ability to capture a theme in a timepiece. Art watches existed alongside practical watches but have recently become a lot less common, especially when it comes to affordable items. As consumer tastes ebb toward conservatism during unpredictable economic times (as we are in now), more experimental or artistic designs often get pushed to the side, which I think accounts for there simply not being that many nicely done, inexpensive artistic watches such as those produced by Mr. Jones Watches. 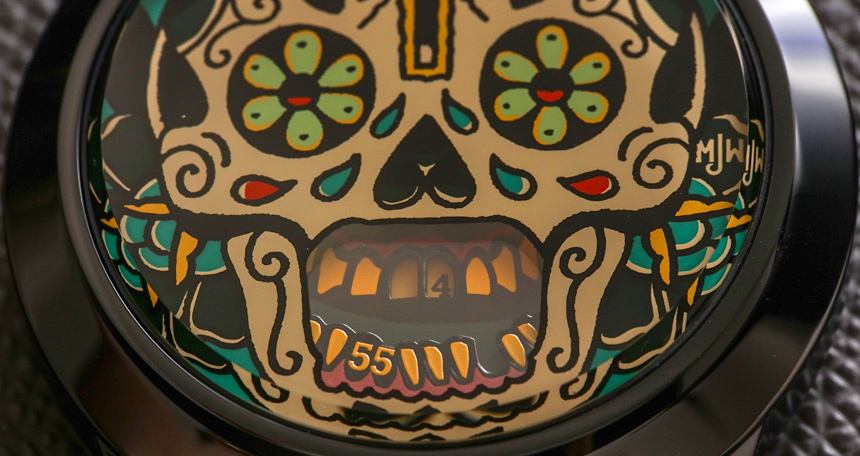 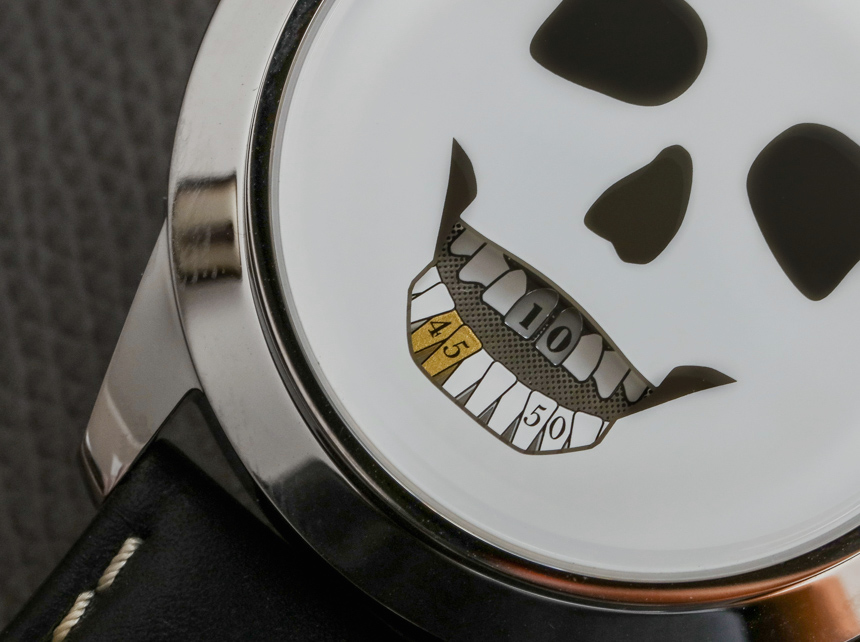 The Last Laugh and Last Laugh Tattoo watches use modified Chinese-made mechanical caliber TY1723 automatic movements. Otherwise it wouldn’t be possible to have prices this low for what is an uncommon movement. The movement displays the time on three discs (two for the hour display and one for the minutes) which are designed into the teeth of the skulls on the dial. Legibility is inhibited mostly by the smaller size of the teeth, but overall the concept does offer enough legibility to read the time in good lighting conditions. 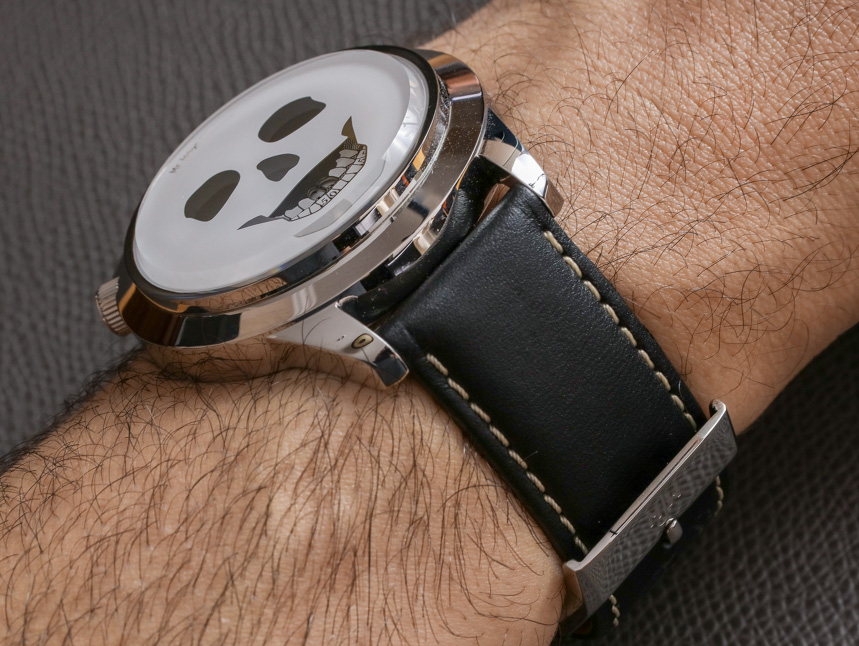 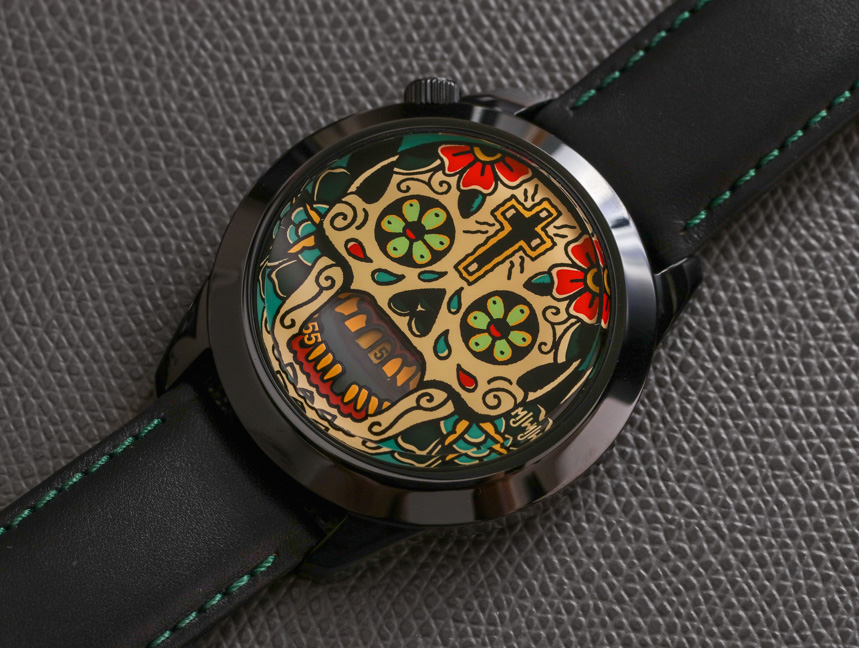 I recall earlier in 2017 meeting with founder of Mr. Jones Watches, Crispin Jones in London at the brand’s welcoming little shop. One of the things I mentioned to him was the likely value of making larger versions of his watches. The brand’s largest timepiece at the time was 40mm wide – though most of their popular models still only came in the brand’s 37mm wide case. Now close to the end of 2017, Mr. Jones Watches has seemingly taken the advice and the 45mm wide versions of the MJW The Last Laugh XL and the Last Laugh Tattoo XL are here. On the wrist I feel validated in my previous offer of advice since I think these XL watches capture the appeal of the watch themes in a larger, more contemporary manner that will open up the brand to new wearers. 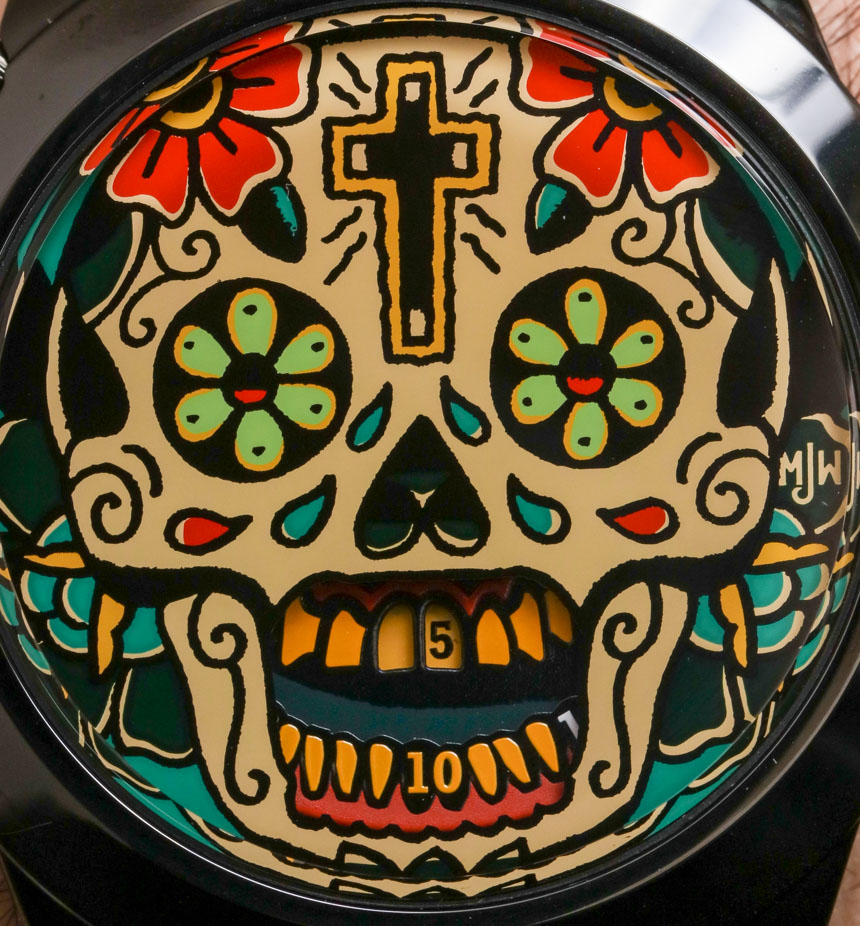 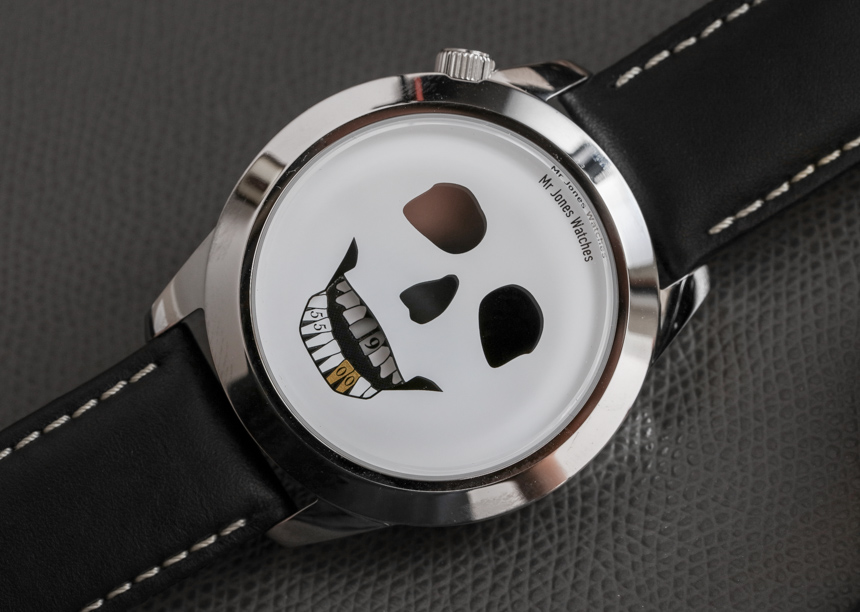 Mr. Jones Watches is not alone in its ability to inject a fair deal of whimsical art into a watch dial, but it isn’t the norm either. What I find interesting is how few of the many “Kickstarter watch brands” utterly fail to be original let alone artistic. Let’s totally ignore (as I do) all those cheap minimalist watches on Kickstarter, and then put aside the original designs, but that are mostly utility focused (like dive watches). How many of the regular timepiece projects on Kickstarter actually include this level of art in their designs? Very few. Given the relative deficiency of novel artistic watches in the sub-$500 range, I think the market segment is ripe for growth. 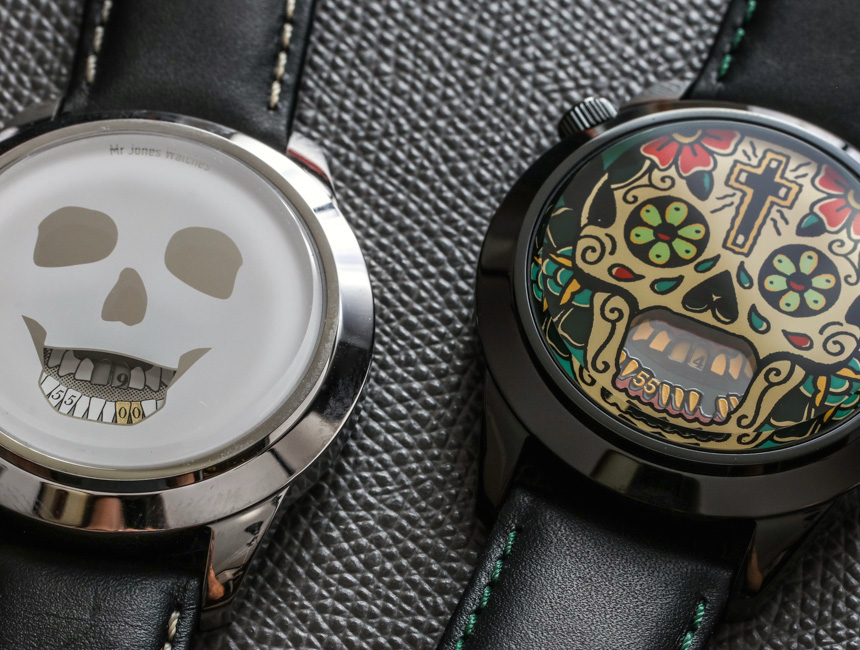 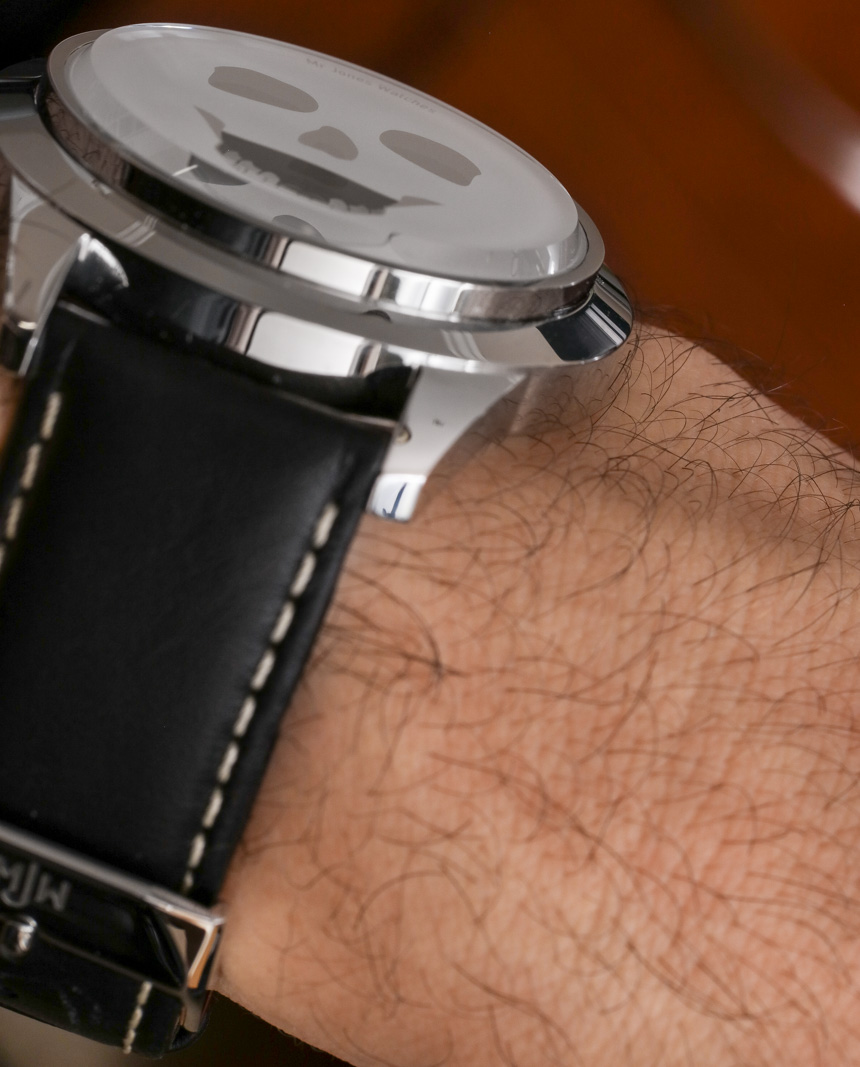 Unlike the 37mm wide version of these watches, the 45mm wide XL case has a different shape, which is straightforward and wearable. In steel with a thick polished bezel, the crown has been placed at 10 o’clock in order to optimize wearing comfort. Water-resistant to 50m, the case is 13mm thick and features a sapphire crystal over the dial (which is a welcome element for sure). 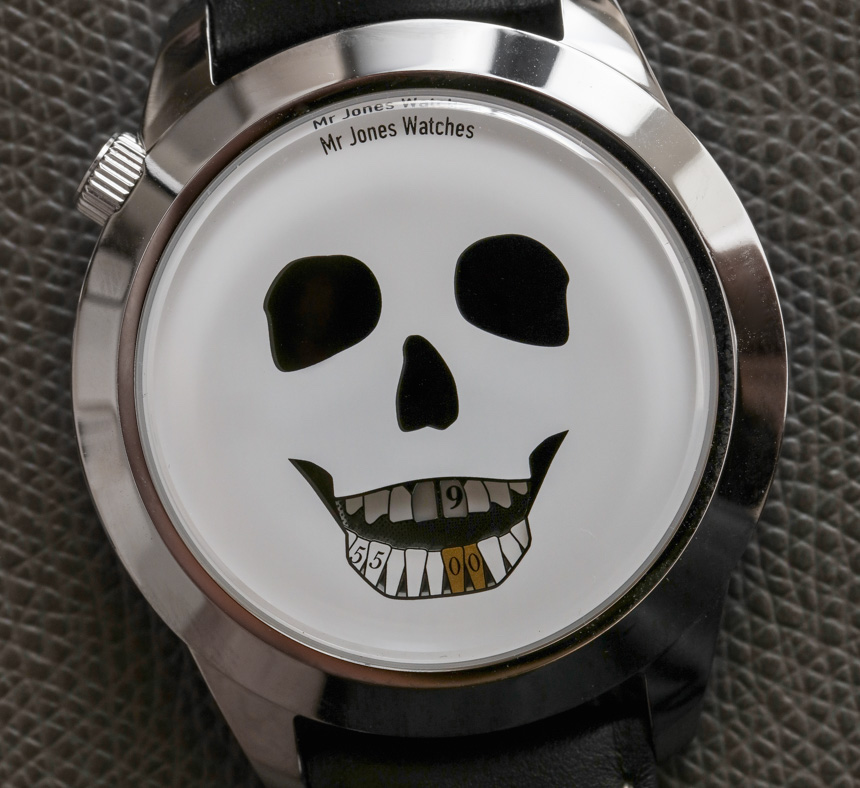 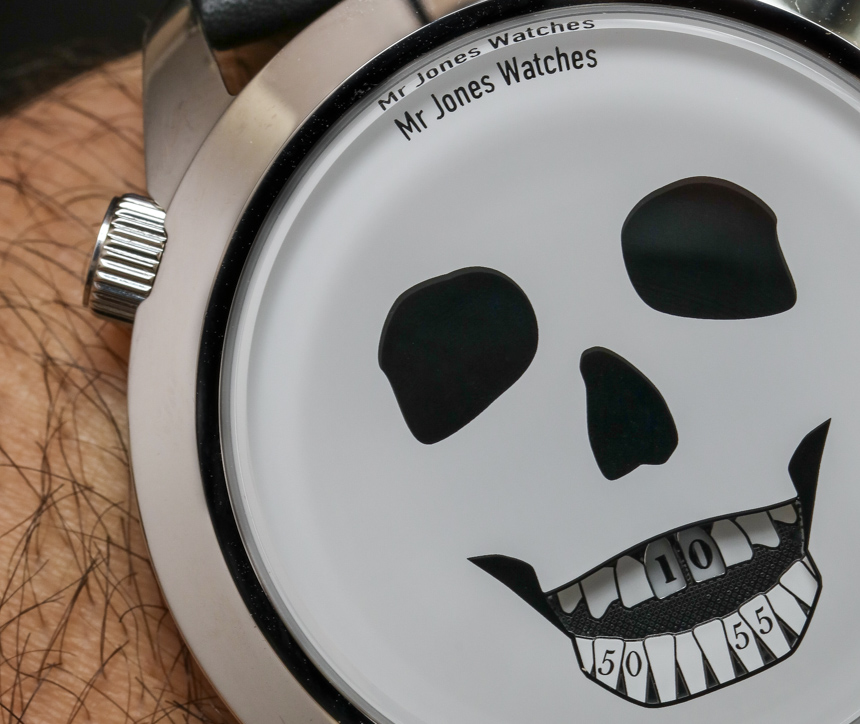 The Last Laugh XL is the more basic-looking dial with just the features of the skull against a white background. Small details are interesting such as the mirroring of the skull’s eyes. This is my favorite of the two models even though I can’t quite pinpoint why I like to wear it. I am sympathetic to the notion of “memento mori” (the philosophic justification for “skull-based” items), though I am not traditionally a “skull watch” wearer. I do admit The Last Laugh XL scores high marks for personality, and doesn’t feel like a cheap watch either. 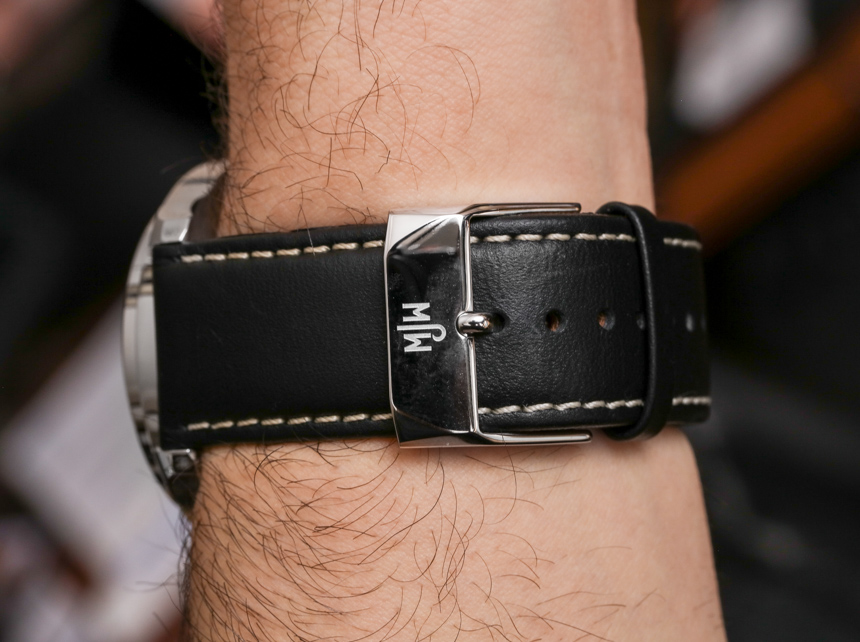 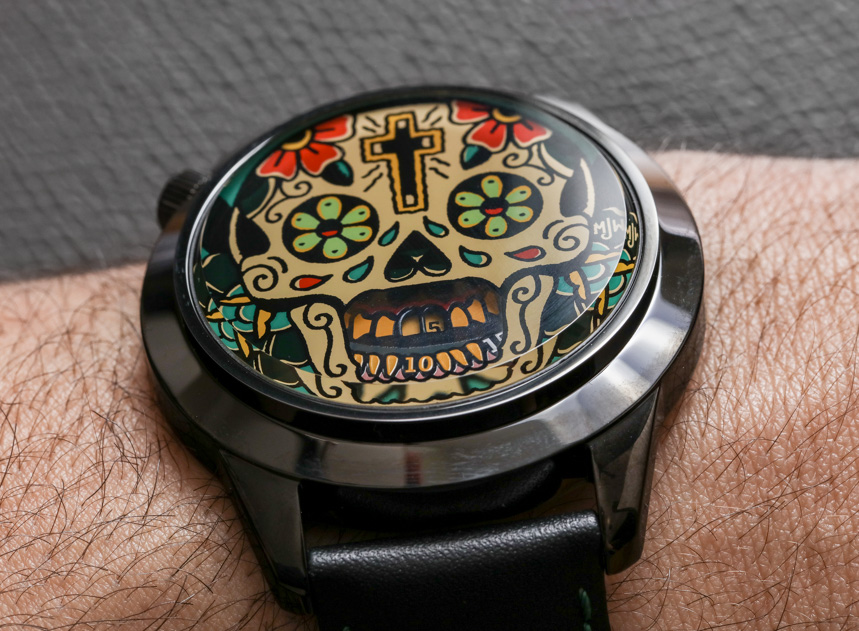 What is interesting is how the proportions of The Last Laugh and Last Laugh Tattoo work well, being slightly increased in size for these dials. The more avant-garde of the two watches is the Mr. Jones Watches Last Laugh Tattoo XL. This uses a “painted” skull inspired by the artistic aesthetic of Mexico’s Day of the Dead. This watch uses a black-colored steel case with a black leather strap that has contrast turquoise-colored stitching that matches some of the dial color accents. 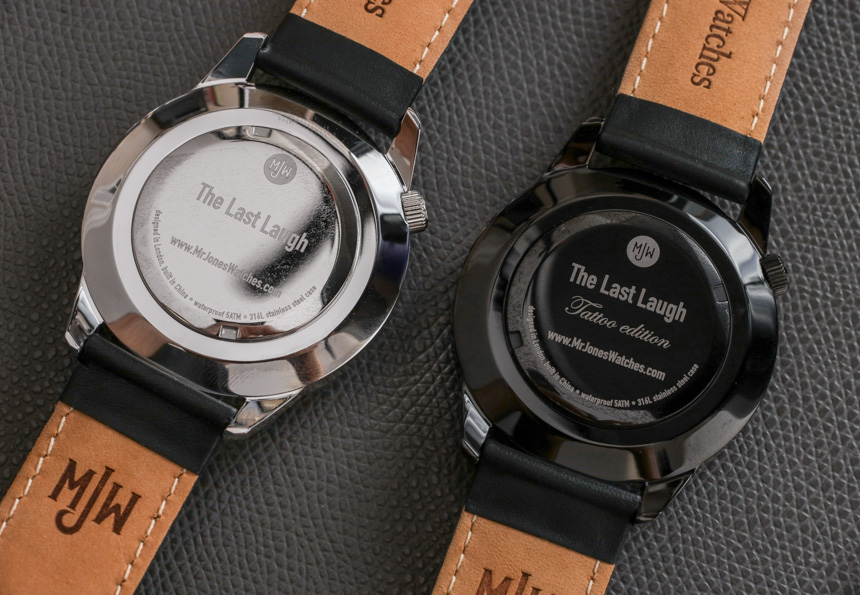 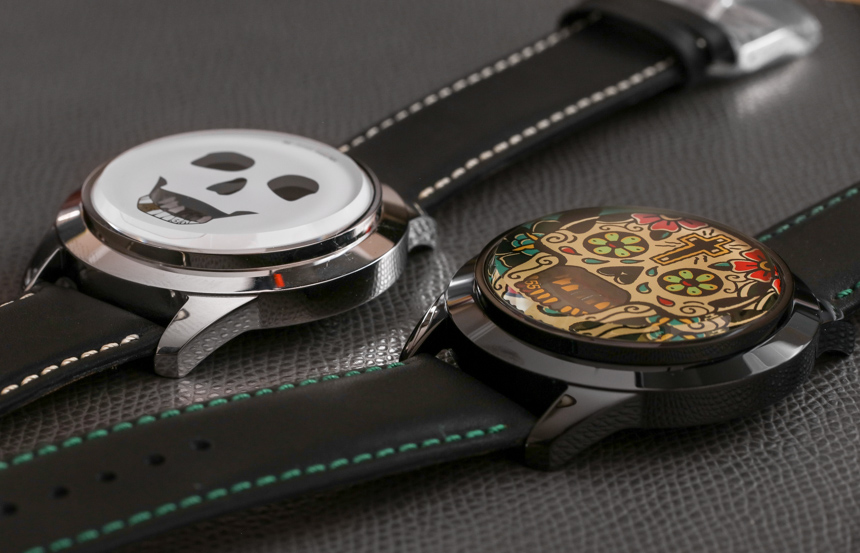 Clearly these watch dial designs aren’t meant for universal appeal. But for those who are fans of the aesthetic, I do advise you to check out these watches closely. For the money, I can hardly think of any other watches which offer the same expressive value, non-standard movement, and refinement that allows them to be just serious enough that you can get away with wearing something playful. Downsides include less than ideal legibility and a movement that isn’t going to satiate high horology snobs out there. If these things don’t bother you, then the new 45mm wide Last Laugh XL and Last Laugh Tattoo XL are worth a closer look. Price for each is £345. mrjoneswatches.com