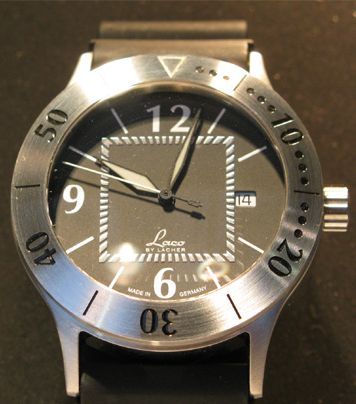 I could not find the name of this new Laco watch. Perhaps if I spoke German that would be possible or I am just too lazy to write to Roger Ruegger, from who excellent (German) website I found the picture. No doubt I will discover it soon enough and update this article, I hope. Roger, like myself is a great lover of diving watches, and happened to snap this image while at Basel World (2008) in April. I have always had a fondness for Laco watches, and this one seemed particularly attractive.

Laco isn’t always known for their individuality, but they take classic aviation and diving watches, and place a polished, clean rendition of their own on them. Actually they have been making pilot watches in that particular style before it was considered a “vintage” look. This particular model is essentially a Teutonic clone of the also new(ish) Cartier Pasha Seatimer. If I know Laco, then this new watch will sport an automatic Swiss movement (likely an ETA 2824-2), and be reasonably priced.

That is of course unlike the Cartier, which is extremely overpriced, but you pay for the name. Oh, and Cartier watches are really shiny, did I mention that? Admittedly, the Cartier pictured has a bit more “character” than the Laco, but that is to be expected. Suppose these watches were on a ship for the crew. The captain would adorn the Cartier, while the officers would have the Laco. Both equally functional, but the Laco more service orientated than fashion forward. 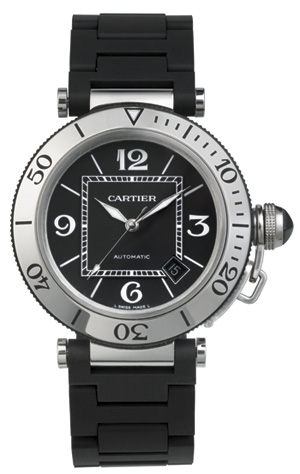 What makes these watches unique is the placement of the square minute hash marks in the middle of the watch, but being in a round case. This is often the opposite, as you have a round minutes indicator in a square case. Nonetheless, it is quite a classy look, curiously nautical in origin. The rotating bezel signifies the connection with diving, along with the rubber diver’s strap on the Laco. This is a very legible watch, and the amount of luminant on the contrasted face seems appropriate. I would have however liked to see the date disc done in black with white numbering to match the rest of the watch. Cartier does do this. Further, I would have liked to see the date placed in the diagonal position, as in the Cartier, which would have made room for a number “3.”

Laco typically has good quality cases, and I am sure most people will opt out of the rubber strap, and there are clearly many more attractive option available. I am actually happy to see that Laco did not copy the gimmicky crown protector on the Cartier connected to the case. This is a vestige of classic dive watches that needed this extra protection for water resistance mostly. The numbering on the Cartier is more tasteful, but that does not mean that the Laco is lacking (had to write that at least one). Instead of paying the many thousands (easily in excess of $4,000 if not more) for the Cartier, you can have a high quality German watch with a very similar design for a fraction of the price, no more than $1000 I would imagine. Not even officially sold in the US, Laco watches can nevertheless be found aplenty online, and on eBay.