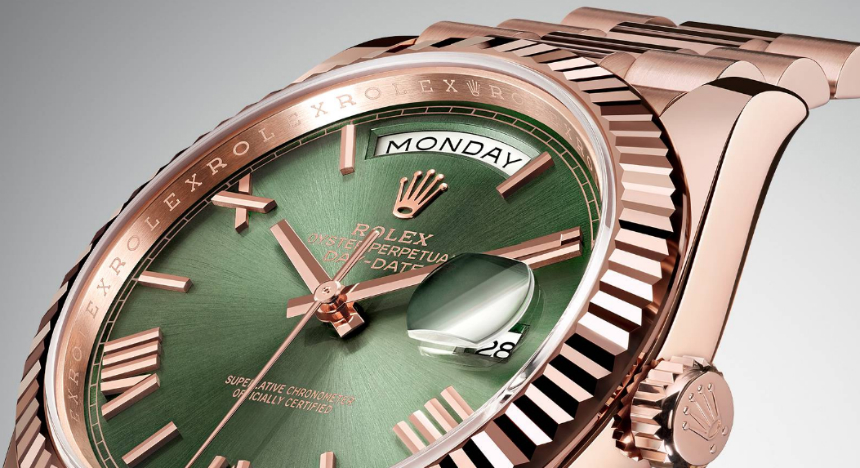 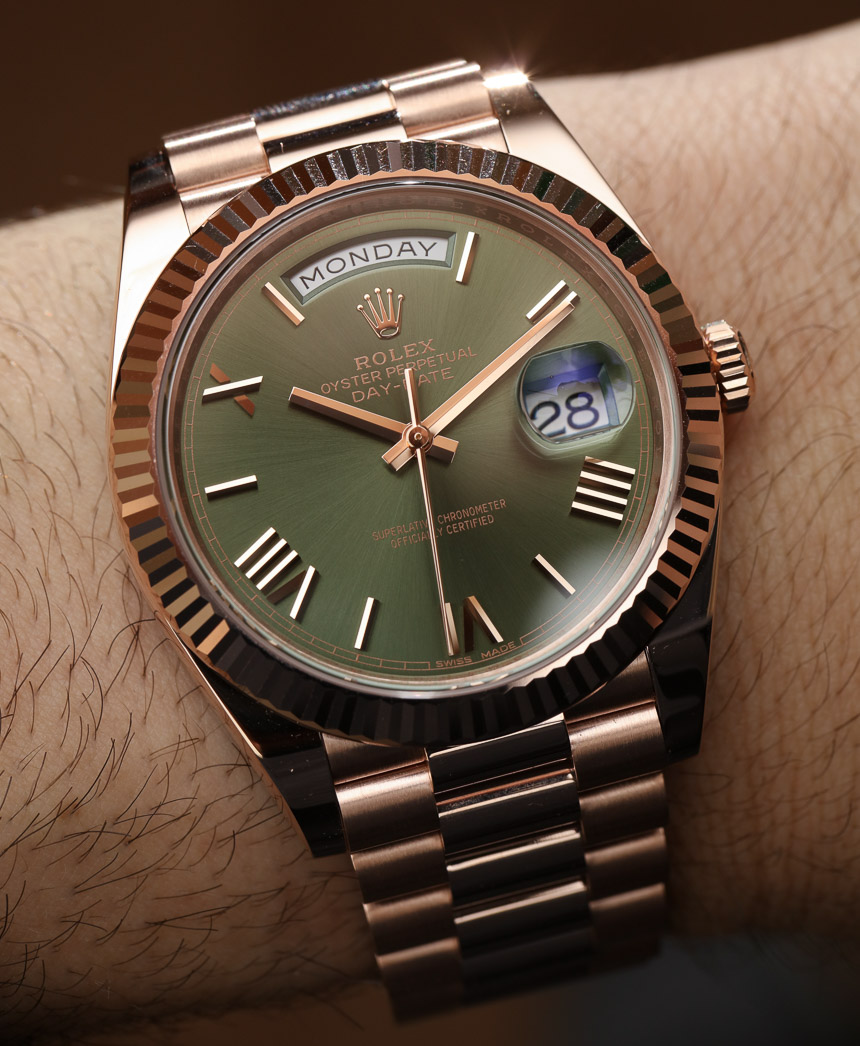 The granddaddy of Rolex watches, the Rolex Day-Date 40 “President” watch turns an appropriate 60 years old this year in 2016, and there’s a new commemorative watch to celebrate the occasion. After the Rolex Day-Date 40 was refreshed last year, it got a new 3255 movement and a 40mm case. Now, for Baselworld 2016, it is getting the regal treatment by getting a Rolex-green dial for its anniversary year. 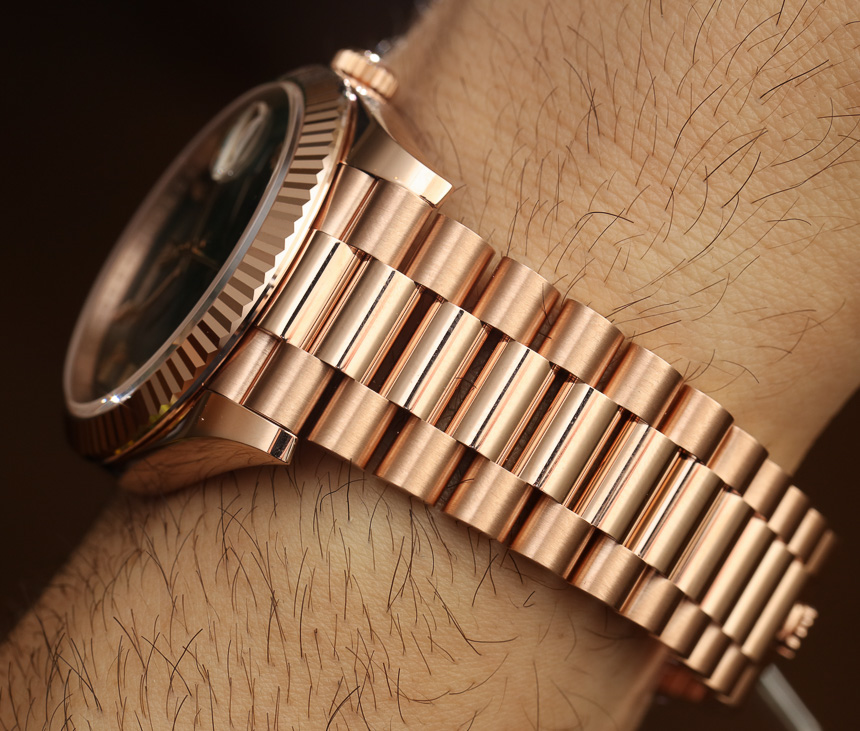 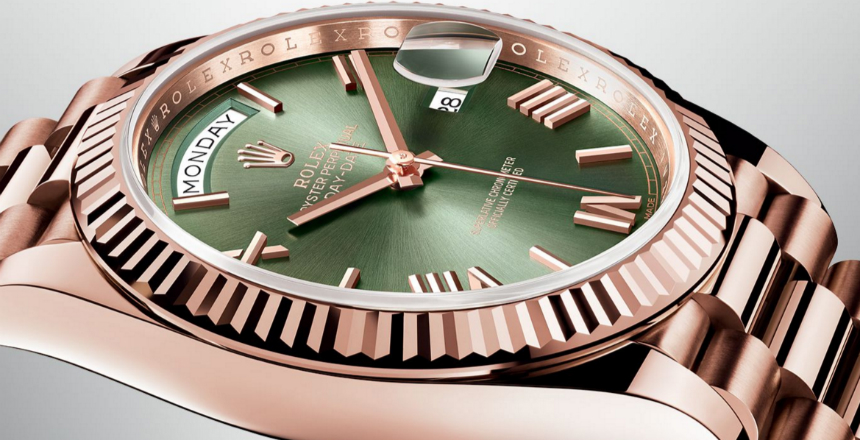 Some of the most iconic Rolex watches feature the unmistakable bright olive green dial, and available in either white gold or Everose gold, both these pieces already look timeless. I believe the last time we saw a Rolex Day-Date with a green dial was back in 2013 with the 36mm version on a green leather band. The fluted bezel and day/date windows are ubiquitous with this watch, and the old-school Rolex green dial on a modern 40mm case is what some people would call a thing of dreams. 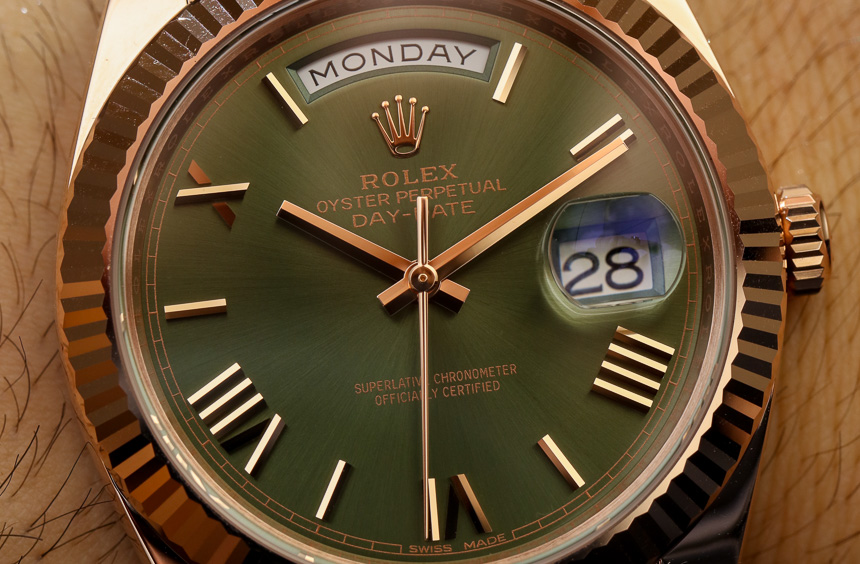 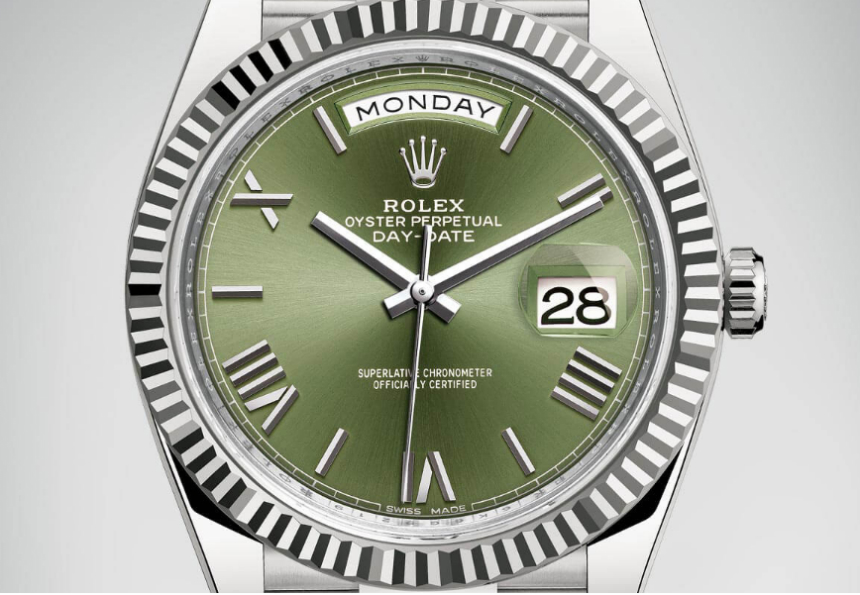 Choosing the green sunray finish on the dial, the Rolex Day-Date 40 60th anniversary watch is certainly a presidential looking piece that commands respect because everyone will recognize it when you walk into a room. No choice other than Roman numerals here, but you won’t really hear me complaining about that. In a modern-day 40mm wide on the wrist, we can see some collectors positively salivating over the prospect of wearing one of these around. 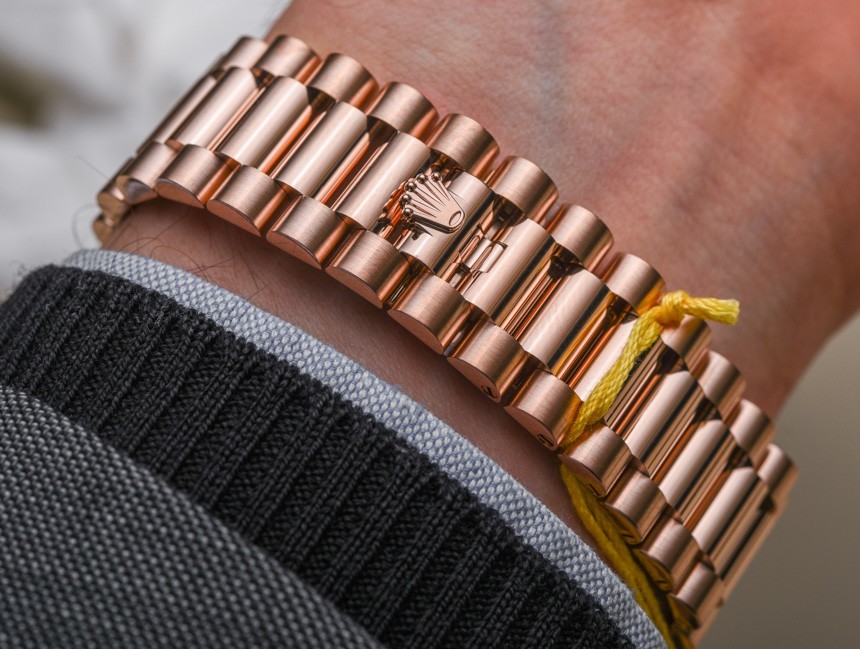 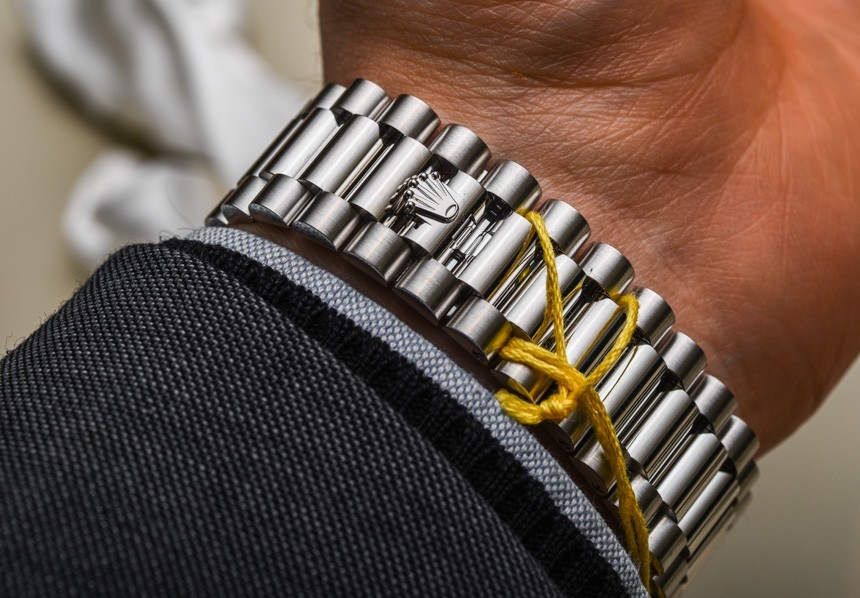 And, of course, a Rolex Day-Date watch is nothing without the President bracelet, and in either Everose or white gold, it looks as commanding and handsome as on the non-anniversary watch (the two seen above). Looking at the dial, on the Everose gold version you have the hands and hour markers done in an 18k pink gold whereas the white gold version will have matching white gold hour markers and hands. I suppose which one you choose is a matter of preference, the Everose gold version being more flamboyant. Or, if that doesn’t really matter to you, the interplay between green and white gold and between green and Everose is likely a factor. I, naturally, love them both. 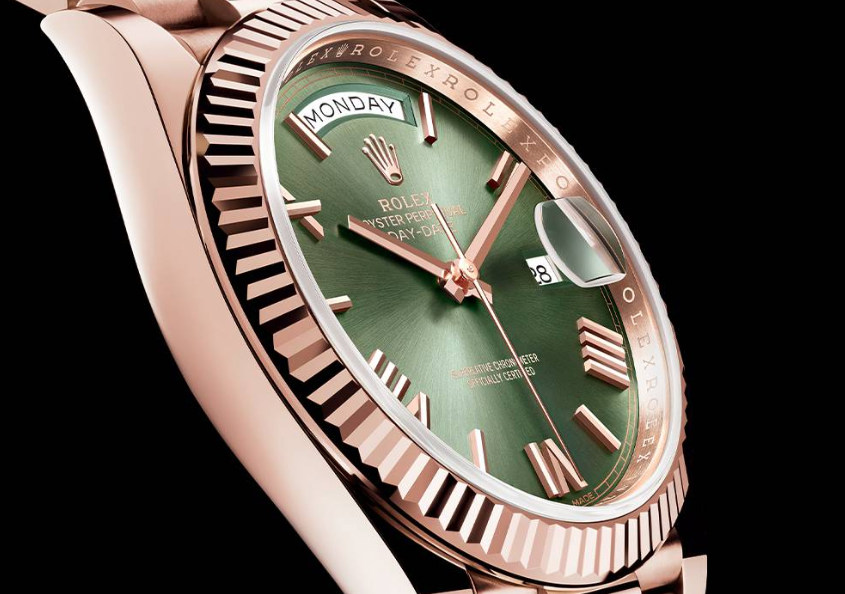 Last year, when the Day-Date 40 premiered, it had actually shrunk down one inch to 40mm wide and had a new 3255 caliber movement installed, which meets the new Rolex Superlative Chronometer certification standards of keeping accurate to within -2/+2 seconds per day. This movement provides the watch with a  hearty 70-hour power reserve. 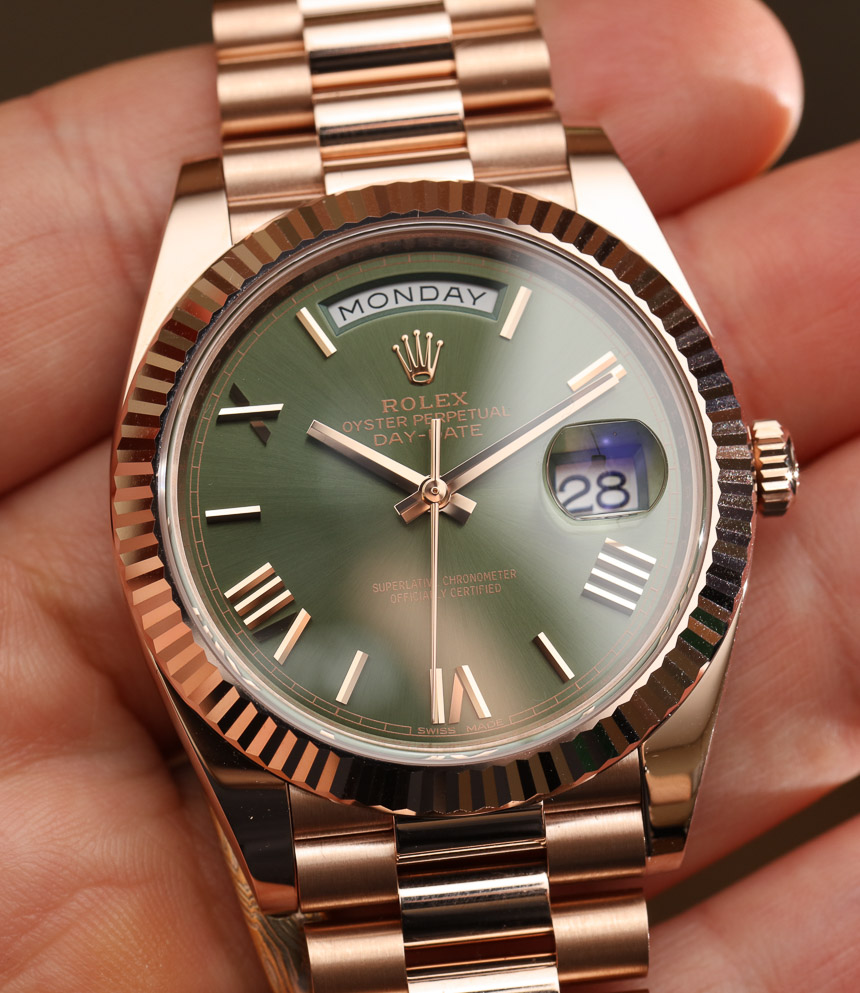 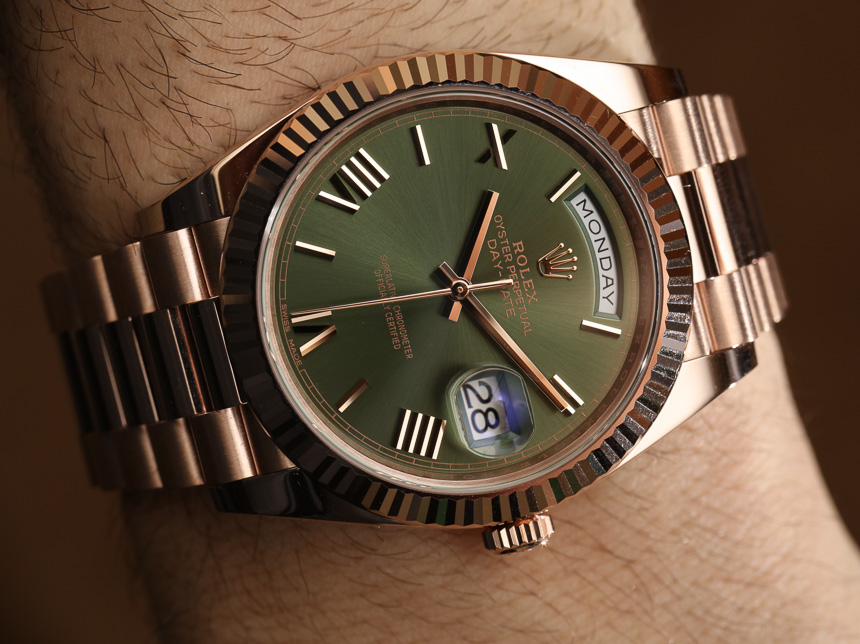 We will update with images as we get them as well as hands-on photos. We’ll also keep you updated on prices, but if we were talking about the Rolex Day-Date 40 60th anniversary watch in Everose gold (Ref. 228235) and the white gold (Ref. 228239) in the context of their non-anniversary siblings, they would carry a price of 35,800 CHF. Again, we’ll update with confirmed pricing. rolex.com