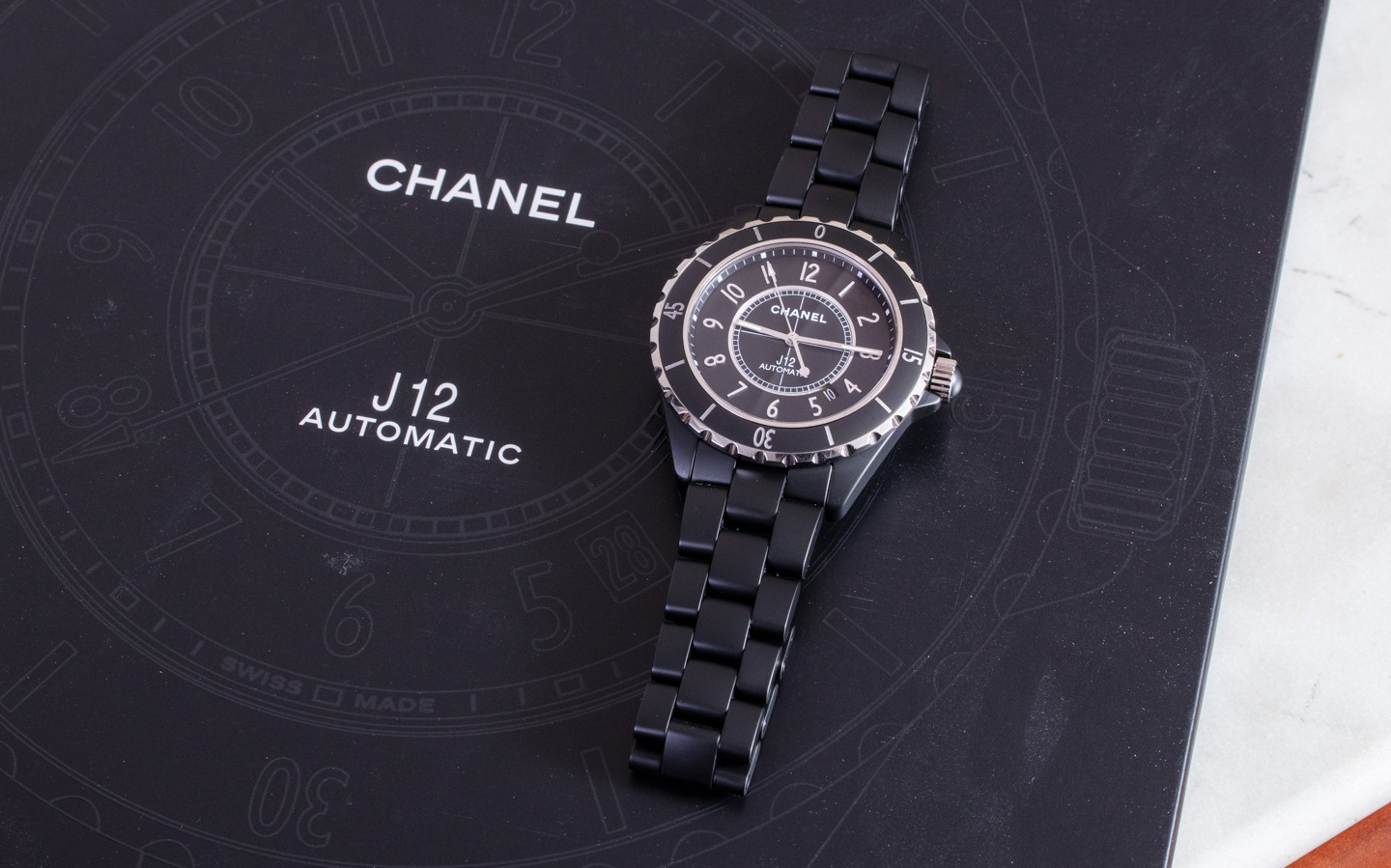 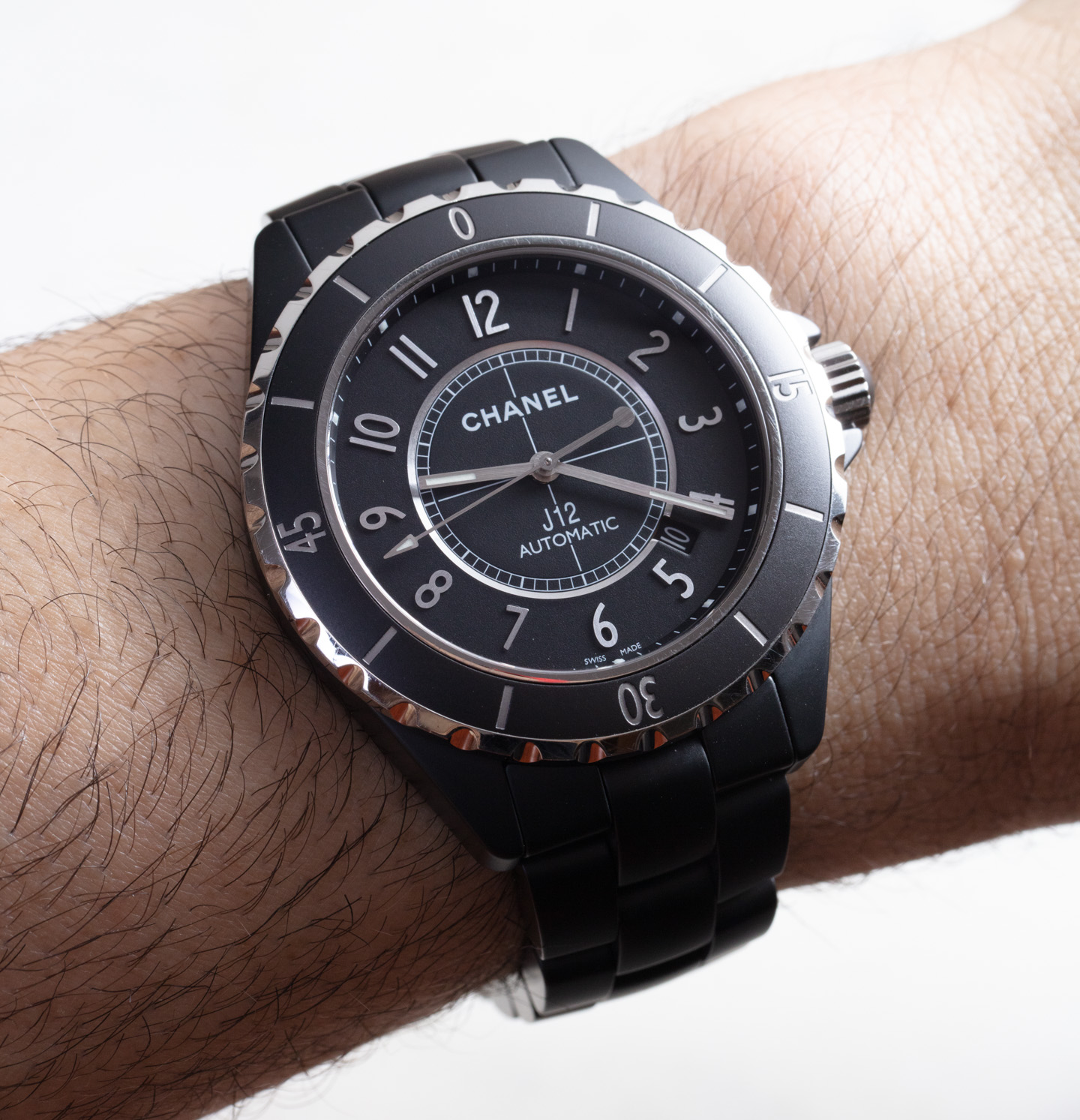 On today’s installment of No Longer Made, we look at the Chanel J12 H3131 men’s watch. This particular No Longer Made is brought to you by WatchBox, where many watches no longer made, such as this Chanel and many more, can be discovered and purchased from one of the most trusted names in pre-owned timepieces. Getting back to the Chanel H3131, it is among the less common men’s watches that Chanel produces, and among the most satisfying executions of the popular J12 timepiece collection for men. I believe the H3131 was originally released around 2012.

First, let’s talk about Chanel as a watchmaker. The Paris-based fashion house founded by the iconic Coco Chanel is primarily associated with women’s fashion, which makes sense, as most people think of handbags, clothing, sunglasses, perfume, and makeup when it comes to the globally known brand. Chanel has always been a prolific creator of timepieces, going back to the 1980s. The Chanel Premiere, for example, is a lovingly emotional and attractive women’s watch inspired by both the brand’s famous Chanel No. 5 perfume bottle cap and an aerial view of Paris’s famed Place Vendôme. The Chanel J12 collection of watches came out in the early 2000s and really solidified Chanel as a major name in luxury watches for the 21st century. 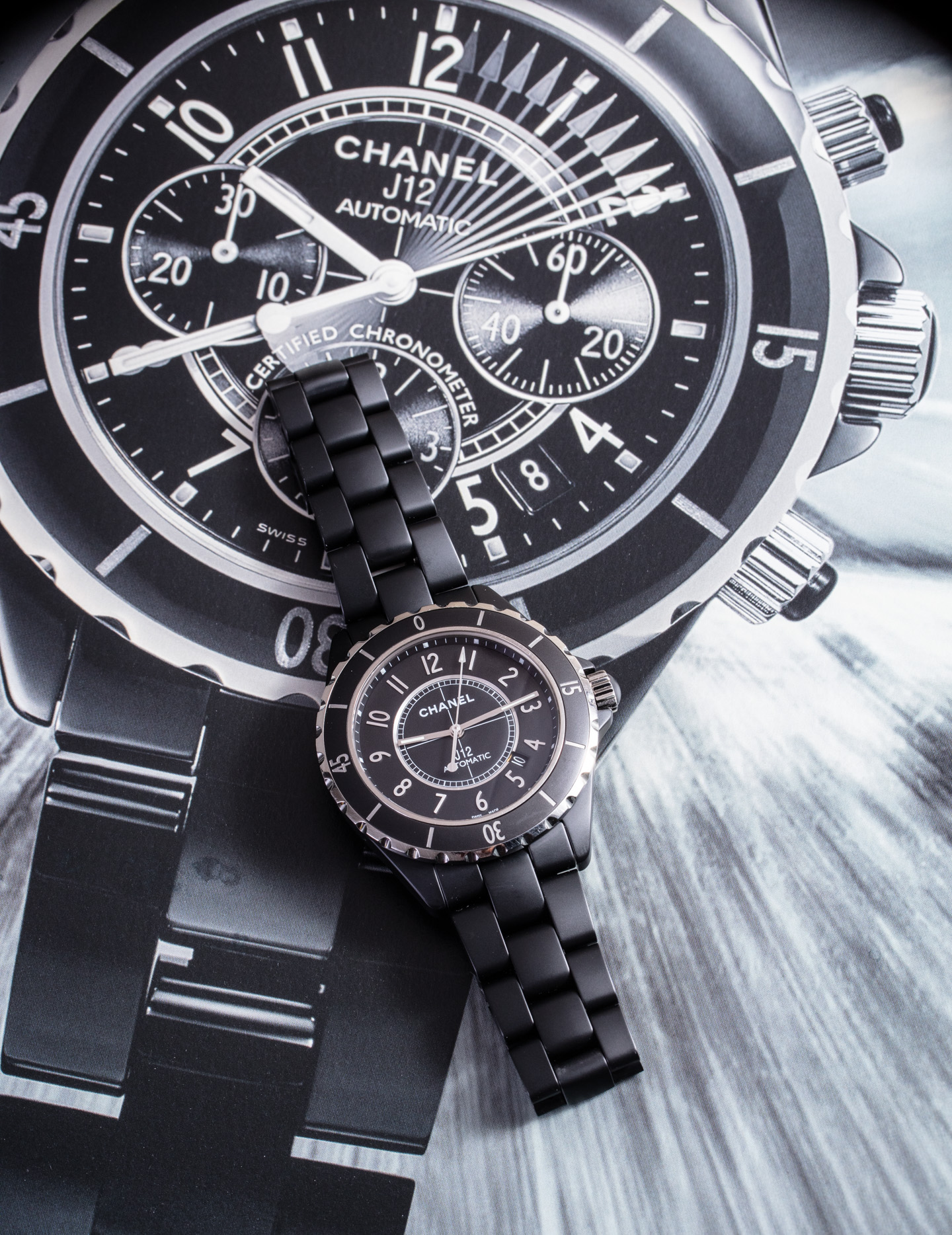 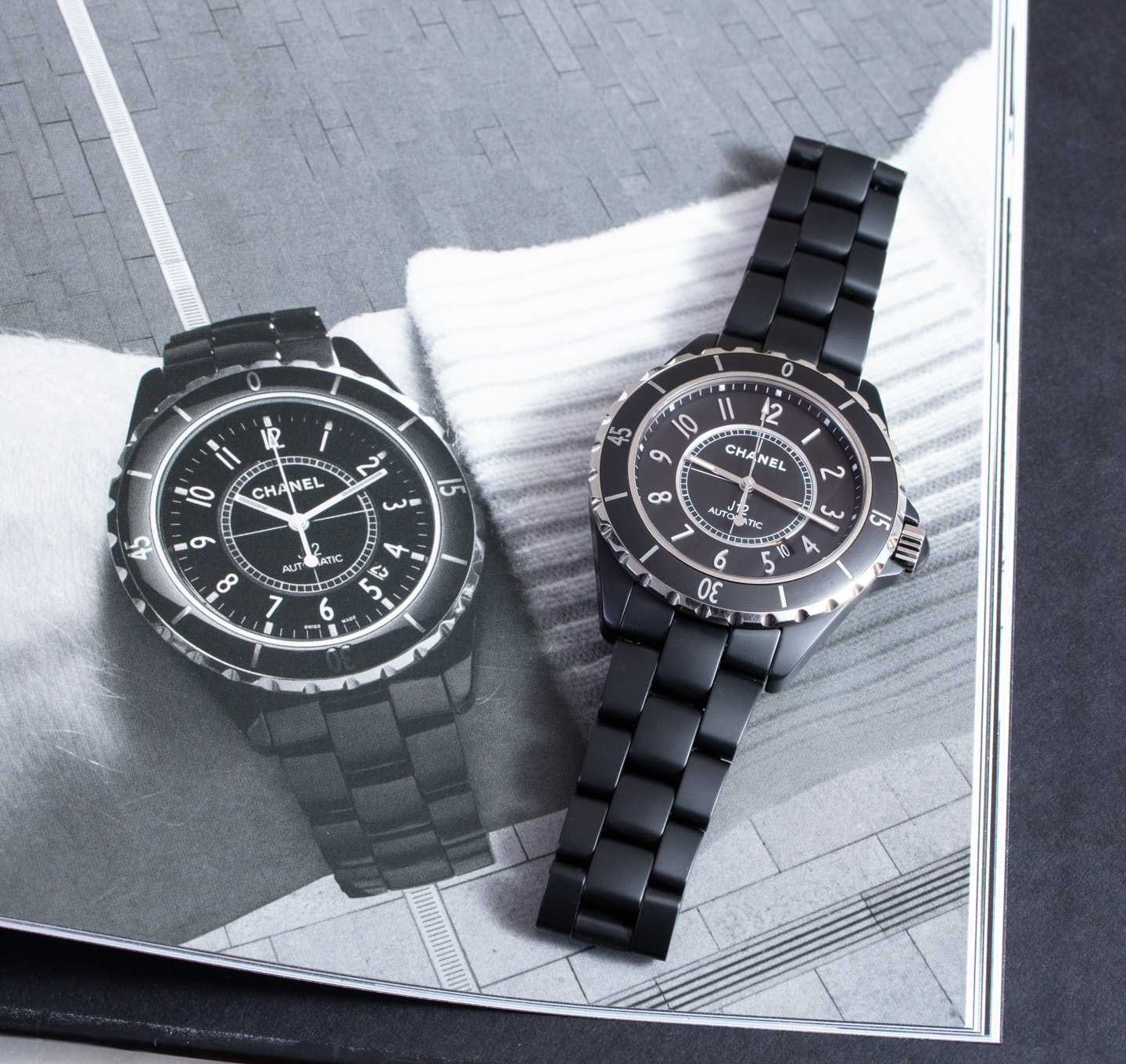 As a man, I’ve been able to appreciate Chanel’s design work and brand from afar, but with relatively few ways to enjoy the brand myself. Chanel has long produced men’s items, but they are less common than items for women. This has made it challenging for a lot of Western men to enjoy the brand because of its primary association as a women’s brand. If you can get over that hurdle, there are some incredible watches for men to enjoy produced by Chanel, many of which we have discussed on aBlogtoWatch.

The J12 collection by Chanel is a simple concept that, over the last 20 years, has been executed in a lot of different styles. A small number of those watches have been intended for men — even though the core look and feel of the Chanel J12 are based on classic men’s sport and military watches. The idea when it first came out was to produce a timeless, refined sports-style watch in either black or white ceramic. Swiss Rado had really pioneered the use of ceramic as a material for watch cases in the 1980s, but it was Chanel that really popularized highly scratch-resistant “high-tech” zirconium dioxide ceramic. Most Chanel J12 watches are in either white or black ceramic with the black ceramic versions being mostly in a glossy finish, and sometimes in this more matte finish that lends itself a bit better to a masculine look and feel. 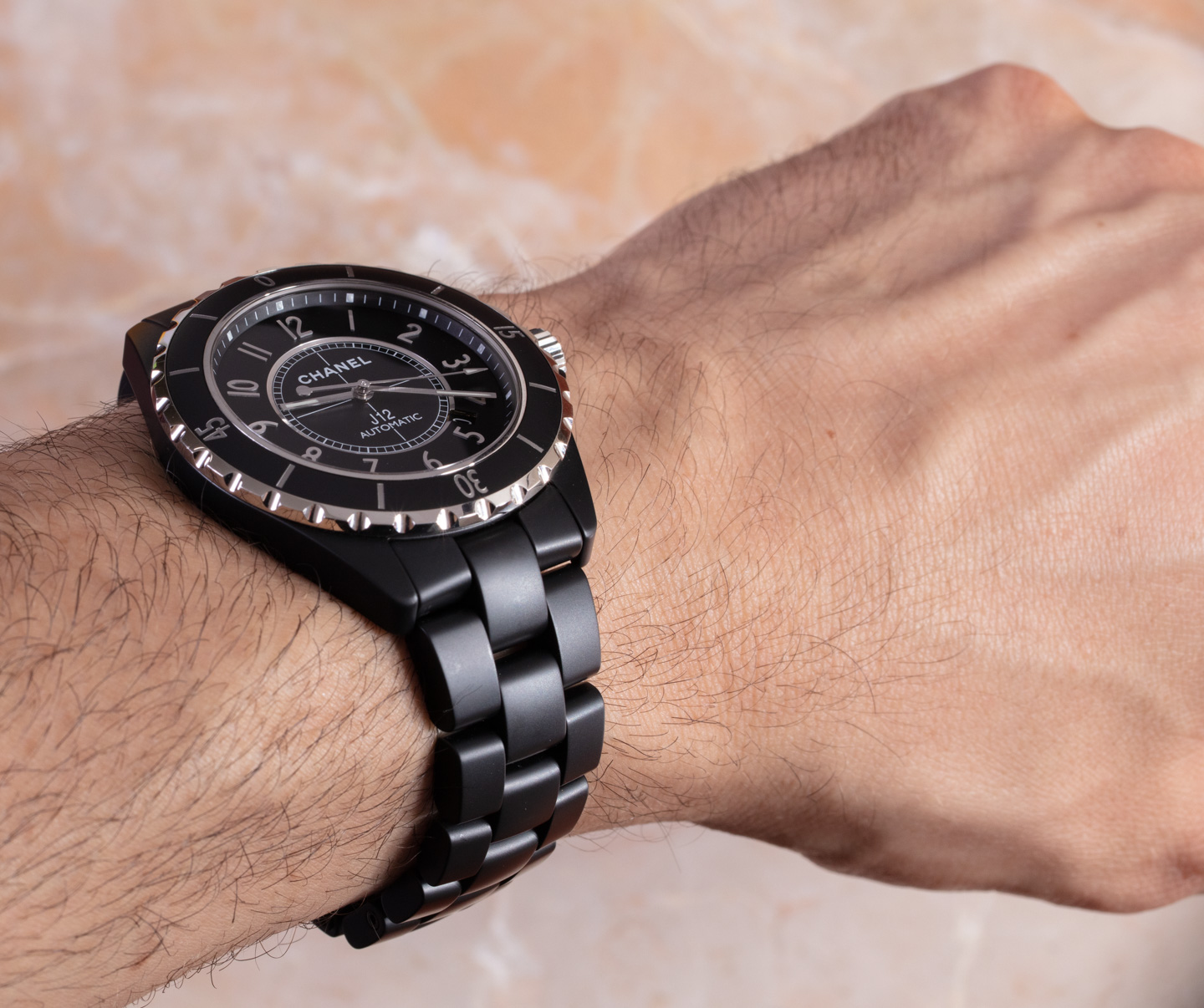 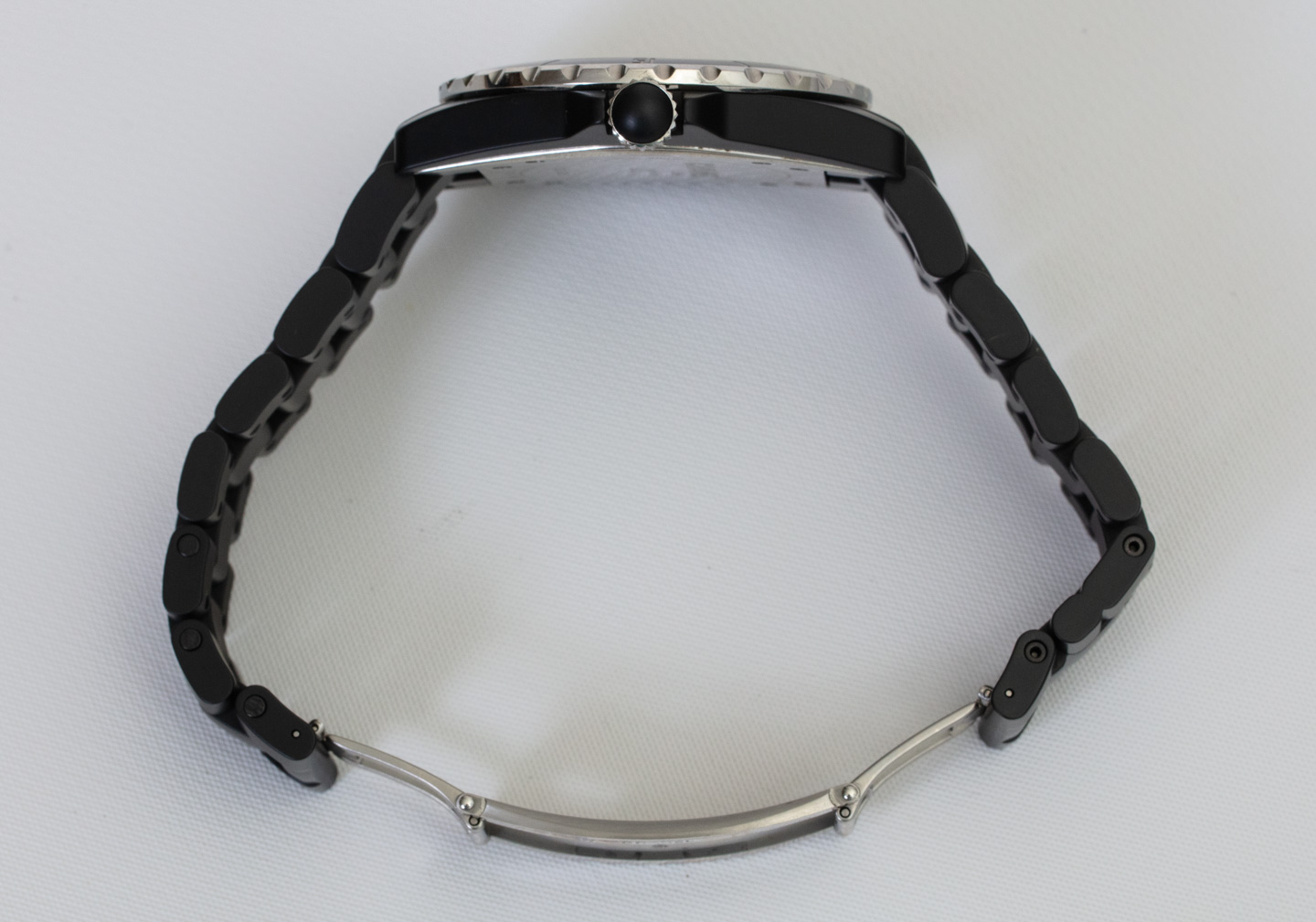 While Chanel still has some men’s watches available, the company has made it clear to me that men’s watches are not among its major focus right now. I think what sealed the deal for Chanel in this area of the watch market was the challenge it had in selling the Chanel J12 Marine — a men’s diver’s-style watch collection that never really took off, despite the beauty of the designs. The problem (as it most often is in the watch industry) was marketing. The company would have needed to create and promote strong marketing materials to help men be romanced by the Chanel brand (as the brand had been able to do with women), while also explaining the virtues of the men’s watches such as the J12 Marine. Once Chanel realized that it didn’t have the marketing sway or built-in cache with its men’s watches (in the way they do with many women’s products), I think they just decided to focus mostly on women’s watches (which is exactly what they do today).

Let us go back in time a bit when Chanel was, indeed, more keen on getting its watches on male wrists and look at the Chanel J12 reference H3131. Most of these watches were sold In Japan, I believe, which is among the rare major men’s watch markets where men will more readily purchase products from brands that are primarily known for their women’s goods. Chanel had ambitions for the J12 men’s watches to catch on more in the United States and Europe, and watches like this reference H3131 are among the best examples of what a men’s version of the J12 manifests as. 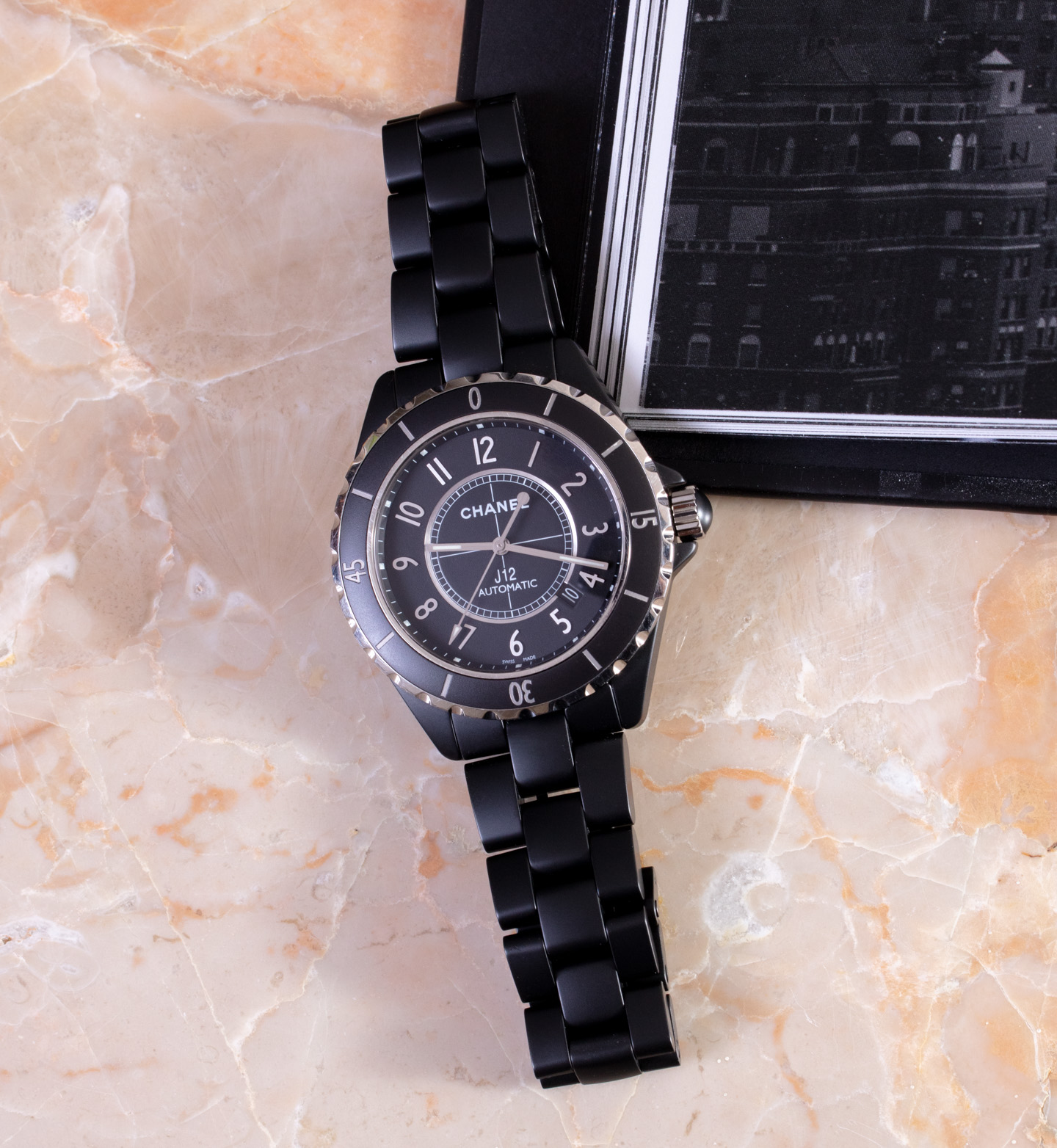 What I like about the J12 H3131 is the size, finishing, and overall simple execution. While Chanel has played with other complications for its men’s watches (GMTs, chronographs, jumping hours, etc…), it is important to get it right in a three-hand model. The H3131 is probably the most effective and practical men’s watch Chanel has ever produced. While most Chanel J12 watches today come in a 38mm-wide case, this watch is 42mm-wide — which is the largest three-hand J12 Chanel produced.

The black ceramic case is also given a matte finishing, as opposed to the more popular glossy finishing of most other black ceramic J12s. These cases are made in-house by Chanel, and they do an excellent job of rendering a classic metal watch shape in a material that is meant to look “new” for many, many years. Ceramic is highly scratch-resistant (as well as color stable), which should attract anyone who hates it when their metal watch cases and bracelets pick up fine scratches and scuffs. The 200-meter water-resistant case is not all-ceramic, though — steel is used in a few notable spots, including the crown, bezel exterior, caseback, spring-loaded buckle deployant, and other internal parts such as for holding the bracelet links together. 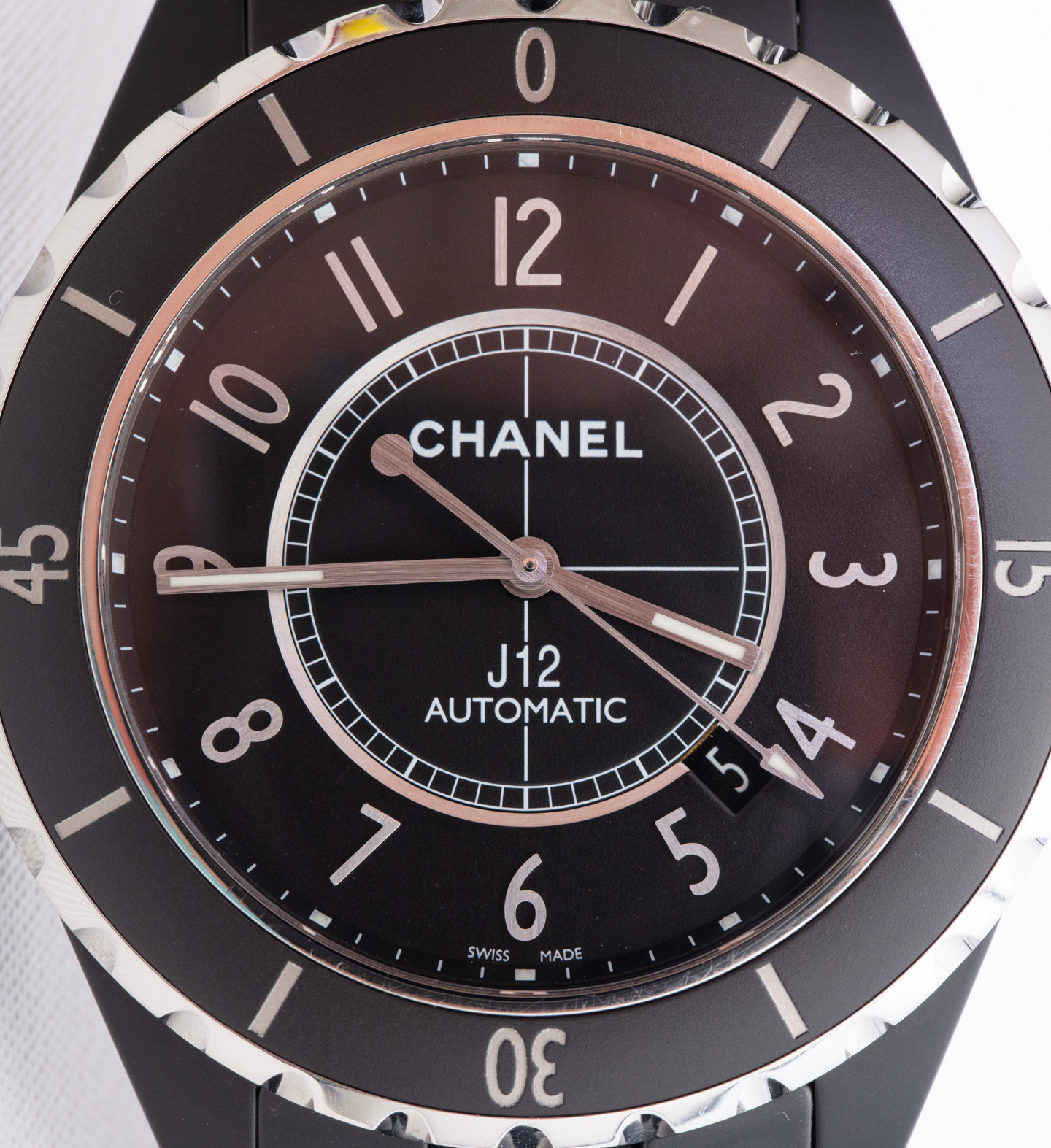 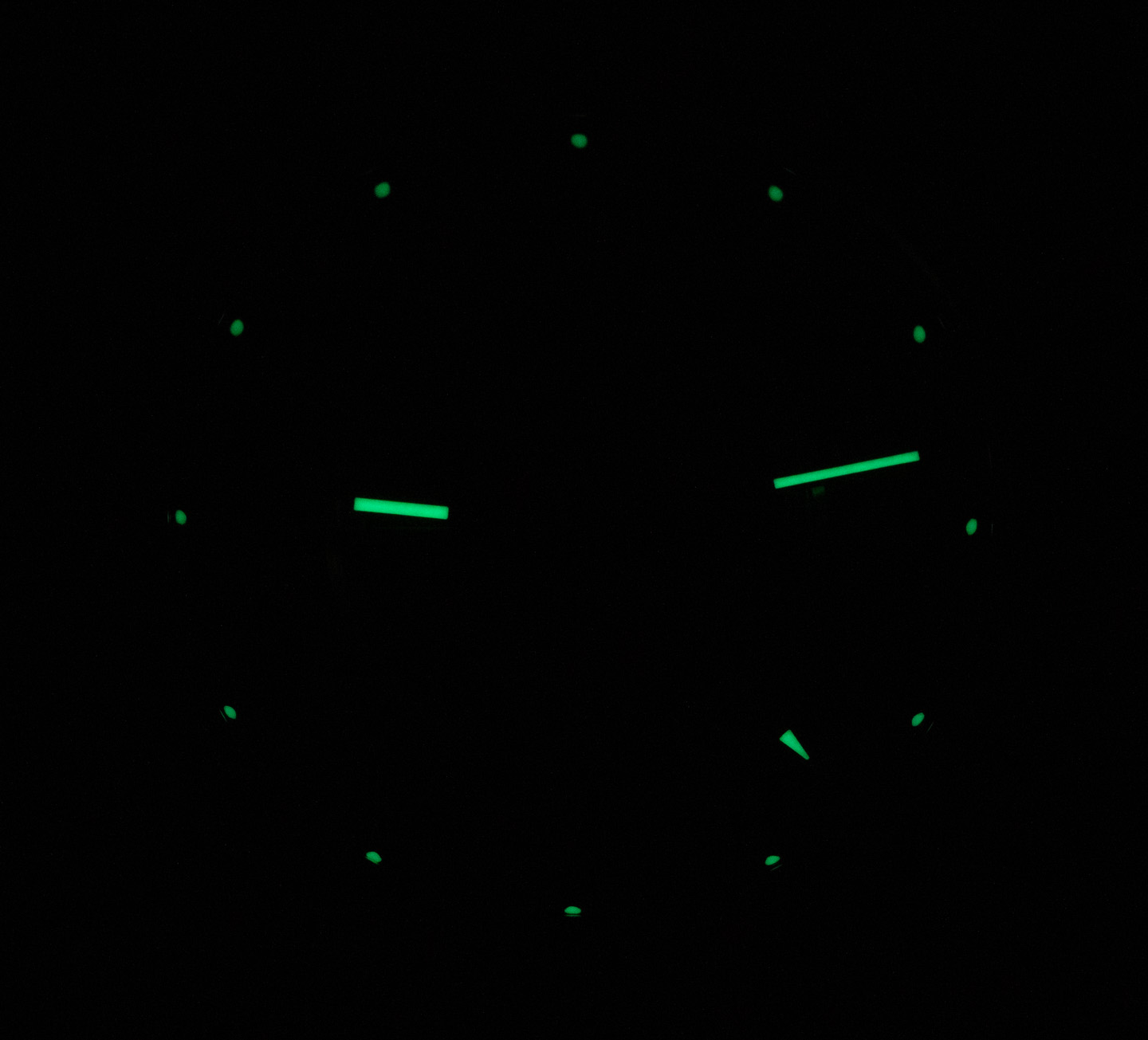 There is no one historic military or diving watch that Chanel based the J12’s iconic case design around. Rather, the J12 is a skillful (and fashionable) amalgamation of various designs collated together. We see this in the profile of the case, the style of the three-link bracelet, the diver’s-style uni-directional rotating bezel, and the legible dial.

What Chanel was able to do with the J12’s dial is rather amazing, in my opinion, because of how pretty yet functional it is. Fashion houses like Chanel are experts at making pretty things. When they can combine that skill with other skills, such as watchmaking, we see fashion houses produce some of the most compelling consumer products available — hence, the popularity of much of today’s luxury fashion market. The J12 dial here uses a series of circles and right angles, along with raised brushed steel revolving Arabic numeral hour markers and matching hands. The dial isn’t gloriously bright at night, but the hands and hour markers are given Super-LumiNova for darkness illumination.

Chanel deserves kudos for coming up with one of today’s most iconic-looking watch faces. In this 42mm-wide form, in matte-black ceramic, the Chanel J12 has never been quite as far on the masculine side of the spectrum as the J12 H3131 here. 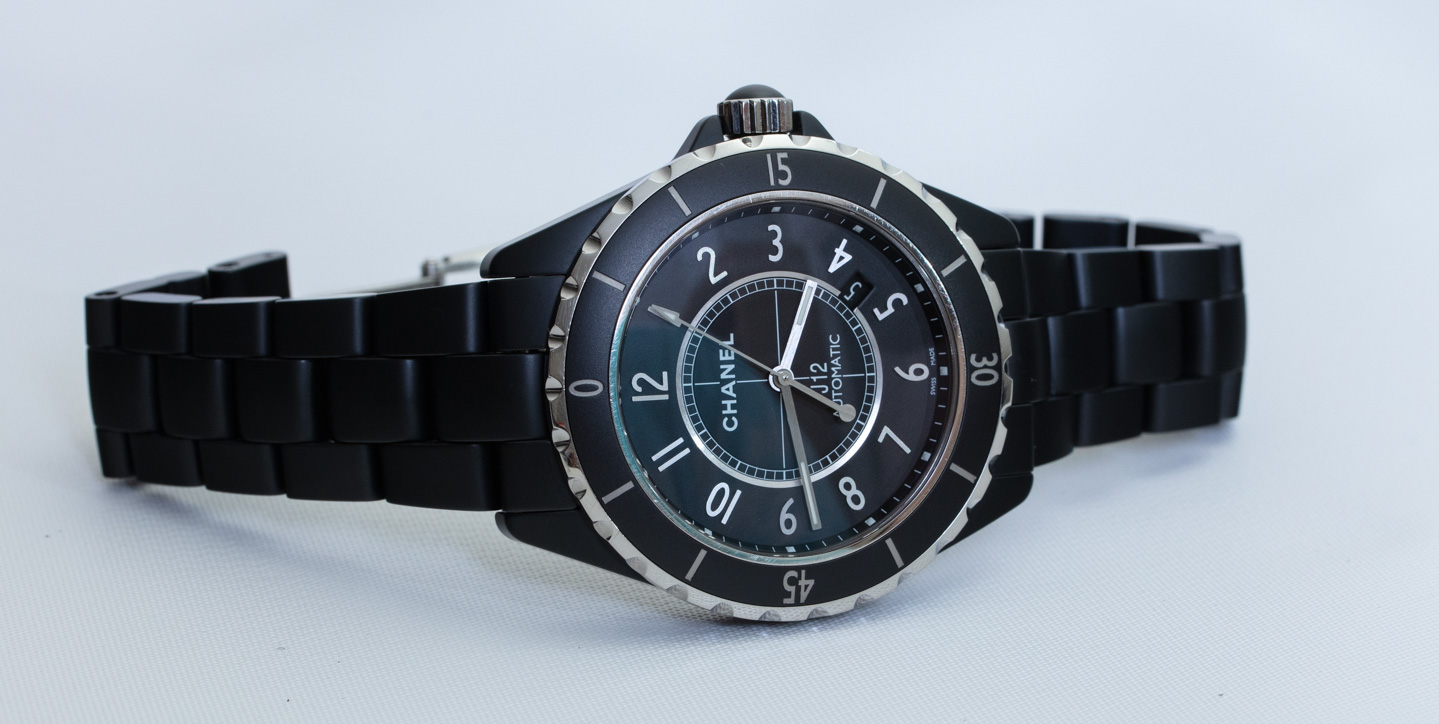 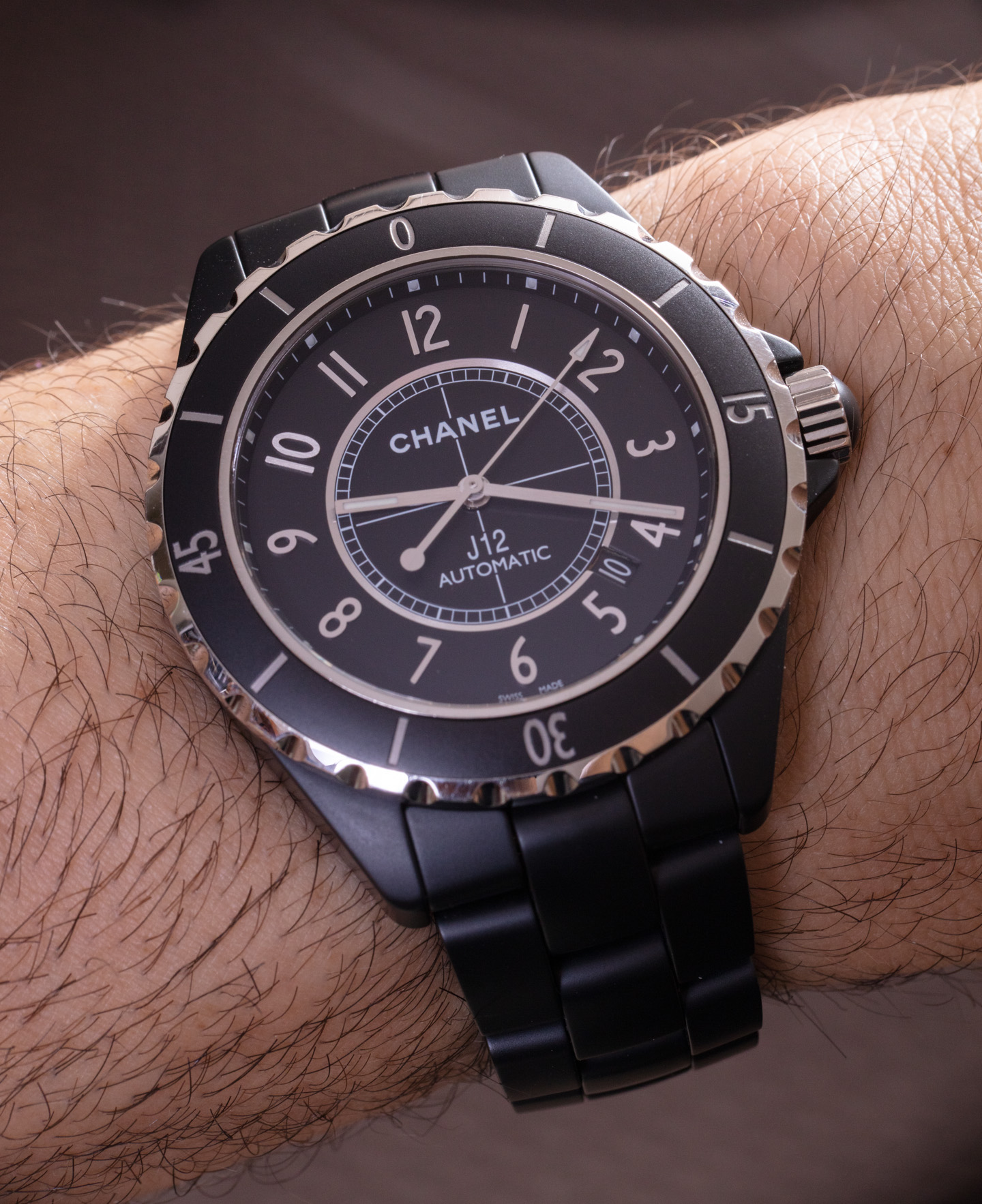 Over the dial is an AR-coated dome sapphire crystal, and there is a discreet date indicator on the dial between hour markers so that the face’s lovely symmetry is not interrupted. Inside the watch is a Swiss Made ETA automatic movement, which has been the mainstay of most Chanel J12 watches. More recently, Chanel has started to use Swiss Made Kenissi movements in its watches; functionally speaking, the experience for a three-hand J12 watch is the same with an ETA or Kenissi 4Hz, two-day power reserve automatic movement.

For me, the H3131 is the ideal way to enjoy the Chanel J12 collection. Women have lots more options, but there are indeed other men’s versions of the J12. As a man’s watch, it benefits from a slick contemporary sensibility being ideally suited to major metropolitan areas around the world. The Chanel brand is also widely known and respected, which means it will get more layperson respect than a timepiece from a more obscure watchmaker. The J12 also happens to make an excellent daily wear — it’s comfortable, legible, and truly multifaceted in its visual appeal. Chanel’s last retail price for the reference H3131 J12 was $6,700 USD. Current market prices are in the roughly $3,500 – $5,000 USD range. You can see more No Longer Made Chanel watches and those from many other popular brands at Watch Box Here.