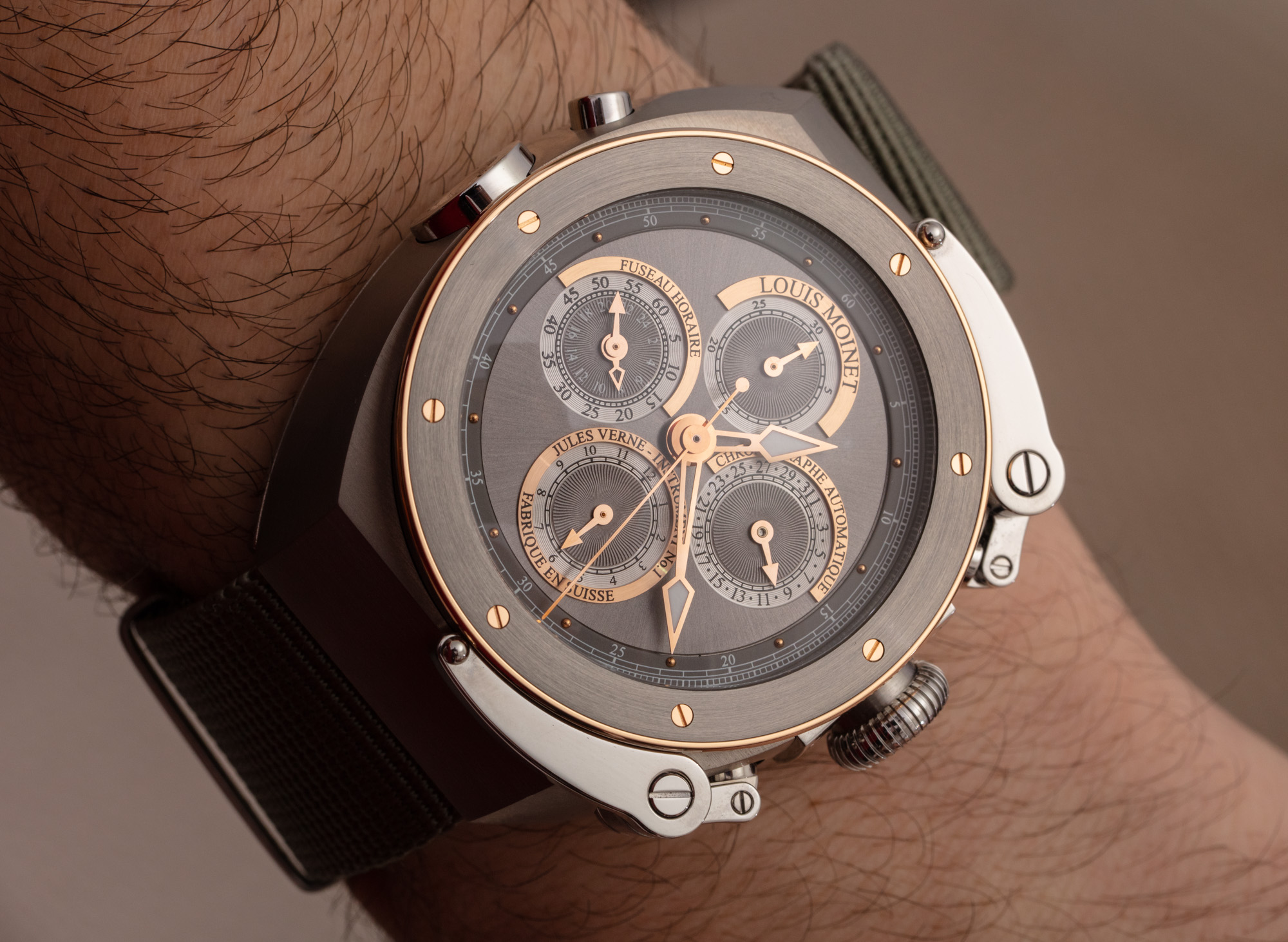 In 2009, I reported on the debut of the Louis Moinet Jules Verne Instrument 1 and Instrument 2 watches here. The duo of watches, which would later be produced in few, small-number series, was modeled after both the historic design work of 18th-century French watchmaker Louis Moinet, as well the science fiction work of French writer Jules Verne. I don’t know if the two men met, but their lives did overlap a bit as Louis Moinet died in 1853 and Jules Verne was born in 1828. 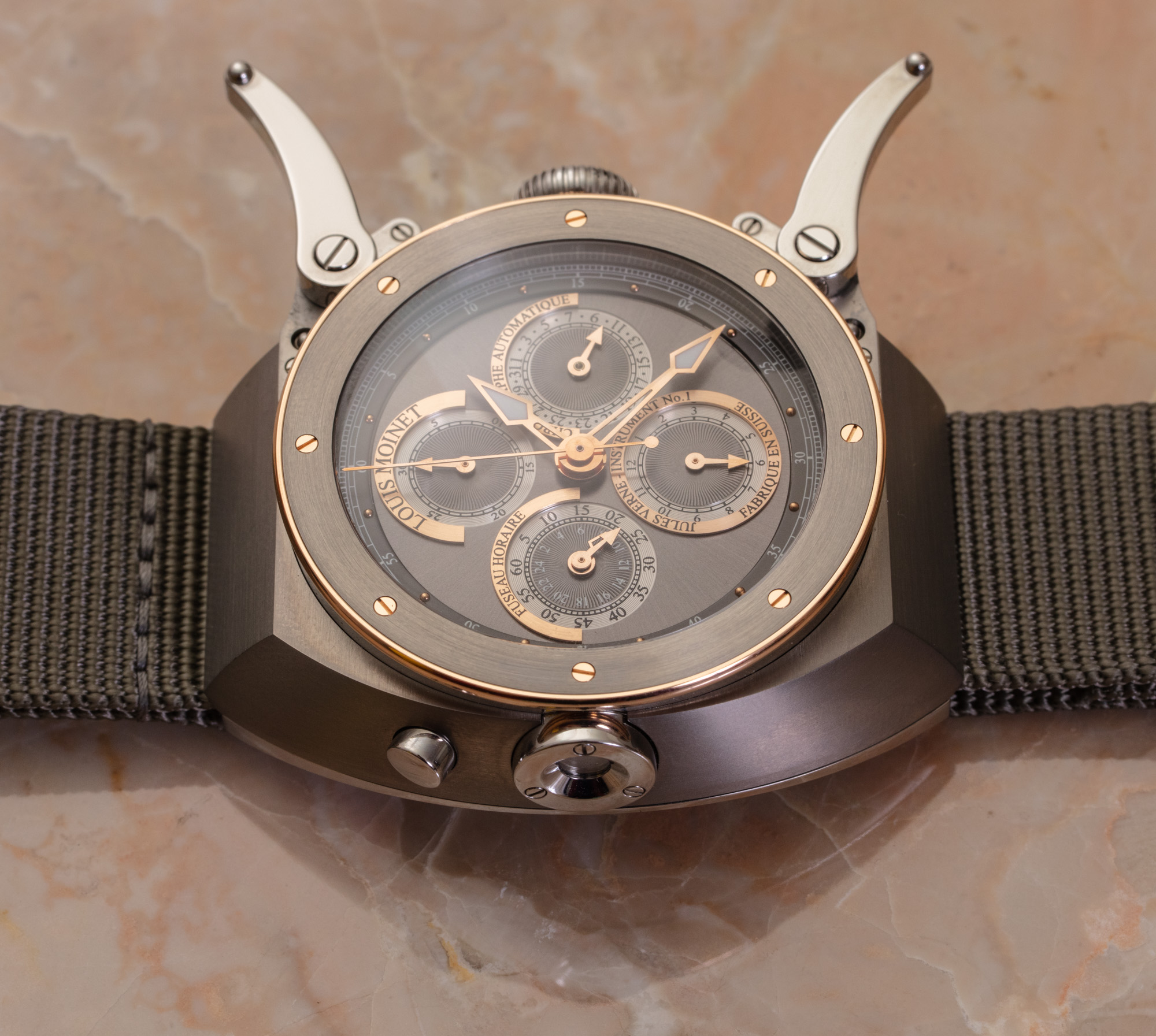 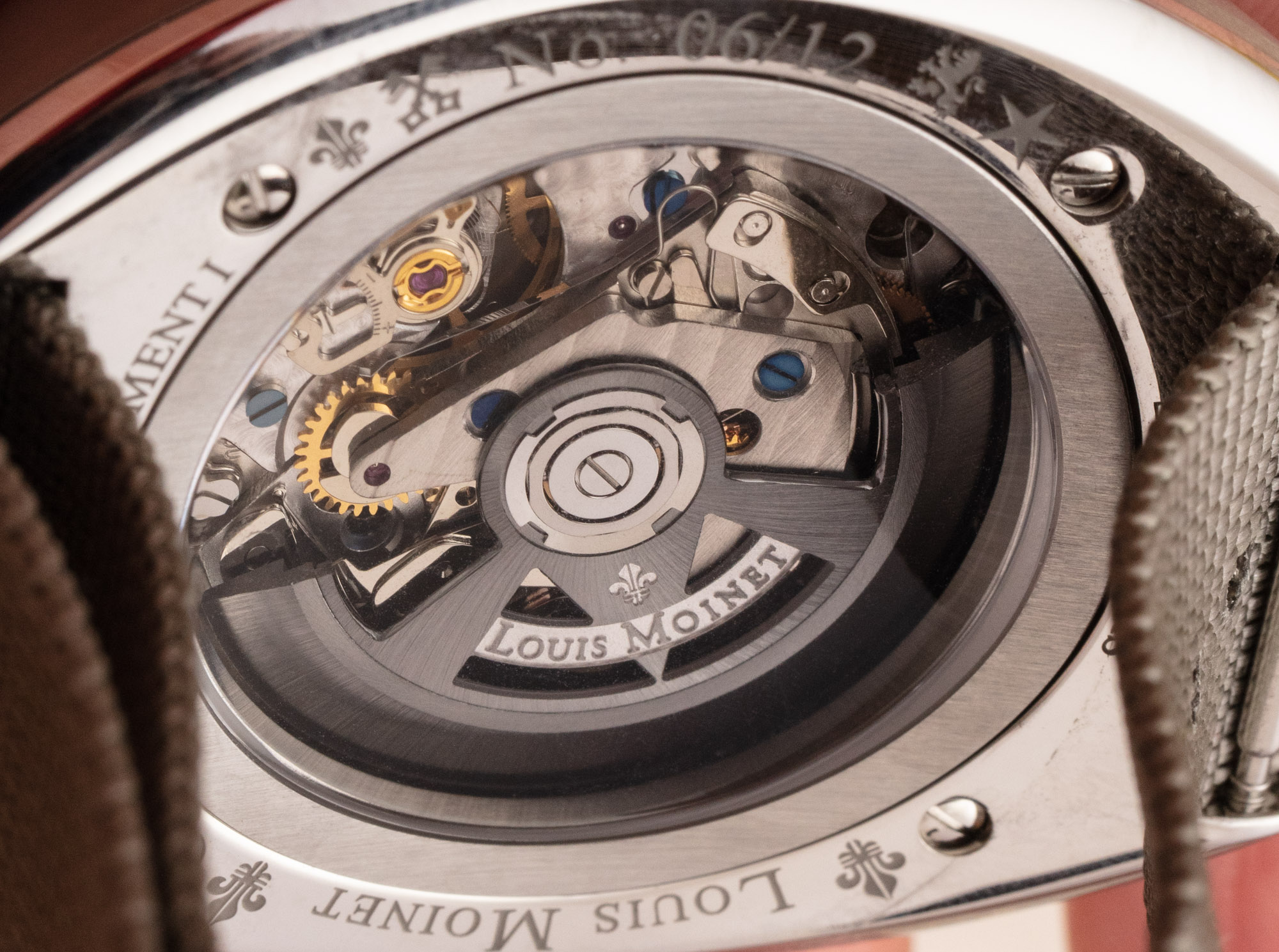 For this aBlogtoWatch No Longer Made article, I have reviewed one of the versions of the Jules Verne Instrument 1 watches. The difference between the Jules Verne Instrument 1 and Instrument 2 watches is difficult to notice at first; the only differences are the movement and the dial. Both versions of the Louis Moinet Jules Verne Instrument used a Swiss Made ETA Valjoux 7750 as the base, but they were each equipped with slightly different modules. The Instrument 1, as seen here, has a second time zone GMT complication at the 9 o’clock position (integrated into the running seconds dial), and the Instrument 2 added a split-second chronograph (rattrapante) function to the 7750. Both of the watches eschew the traditional date window for a date dial display, which keeps the watch dial much more symmetrical and elegant, in my opinion.

The second time zone 24-hour hand is adjusted using the pusher located at the 10 o’clock position on the case, and Louis Moinet engineering did something very special and whimsical with the chronograph pushers. To operate them, you have to unfold the dramatically sized chronograph “triggers,” which then allows you to have a different experience operating them. The closed comparison I can think of is some of the Graham watches that also developed some elaborate trigger systems for the chronograph pushers. Such whimsy is very rarely attempted anymore, and most watch cases of this era are decidedly more efficient by design. Recall that Louis Moinet developed the Jules Verne Instrument 1 and 2 watches prior to the 2008/2009 financial crisis. At the time, wild stuff like these timepieces would sell much more easily. After that era, we began to see much less engineering in watches at this price level, with the really wild stuff being available only at much higher price points. 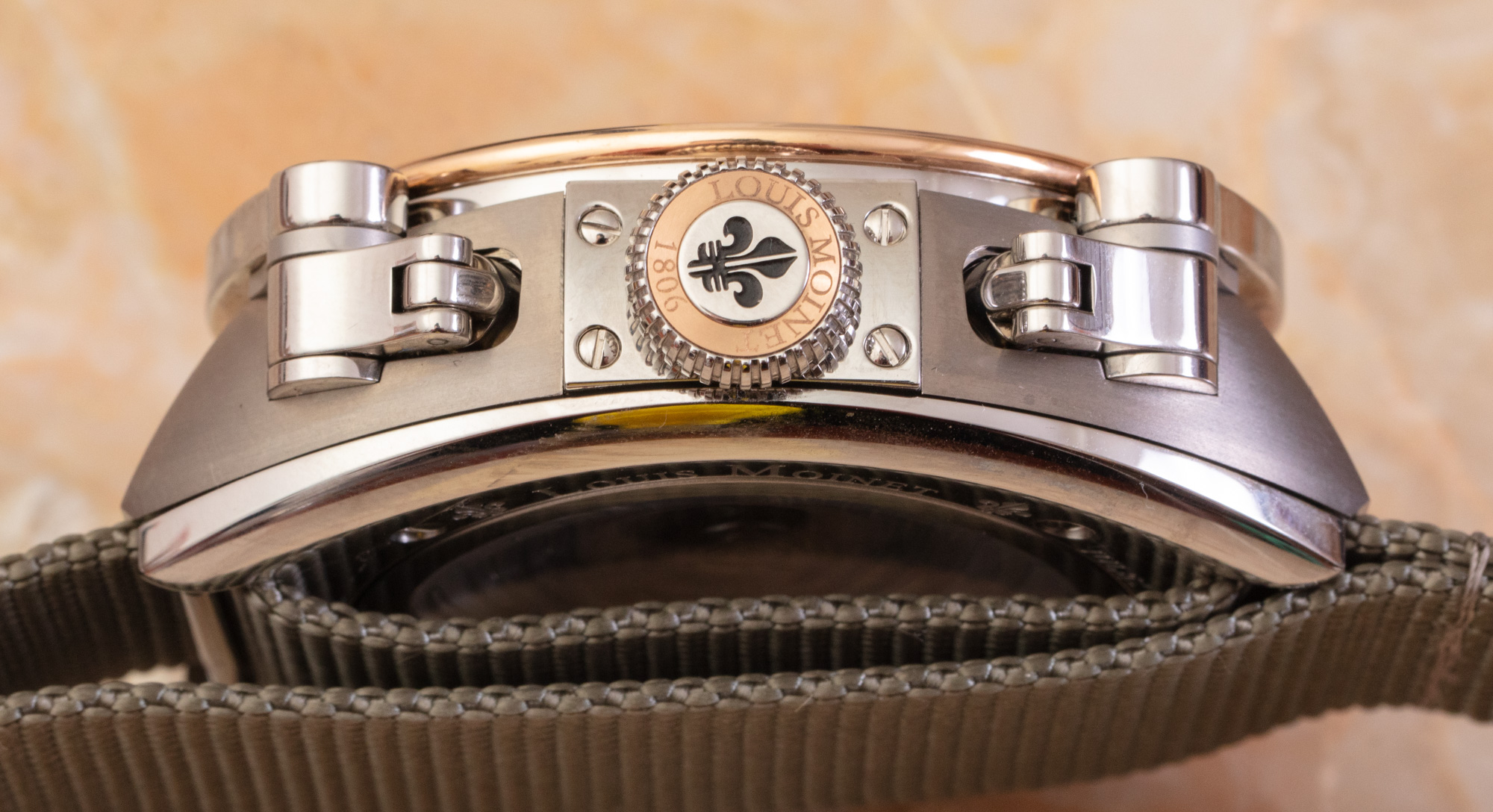 The case overall looks like an old Omega Flightmaster on some type of steampunk steroids. It is produced from mostly brushed titanium and polished steel, with bits of 18k rose gold trim in places such as the ring around the bezel. Water resistant to 50 meters, the case has a big domed AR-coated sapphire crystal over the dial, and thanks to the lugless design, doesn’t wear as large on the wrist as the dimensions might suggest. Size-wise, the Jules Verne Instrument watch case is 46.3mm-wide, 14.5mm-thick, and has a 54mm long lug-to-lug distance.

One of the “hidden” case design features is a small porthole located on the left side of the case. Inside is a small piece of actual moon rock. At the time, Louis Moinet was experimenting with its celestial themes (that it would further develop later), and the moon rock made sense here given the connection to the famous 1865 Jules Verne story “From The Earth To The Moon,” where an early astronaut uses a form of rocketship to travel to the moon. It was later developed into the world’s first science-fiction film for the 1902 silent film of the same name. 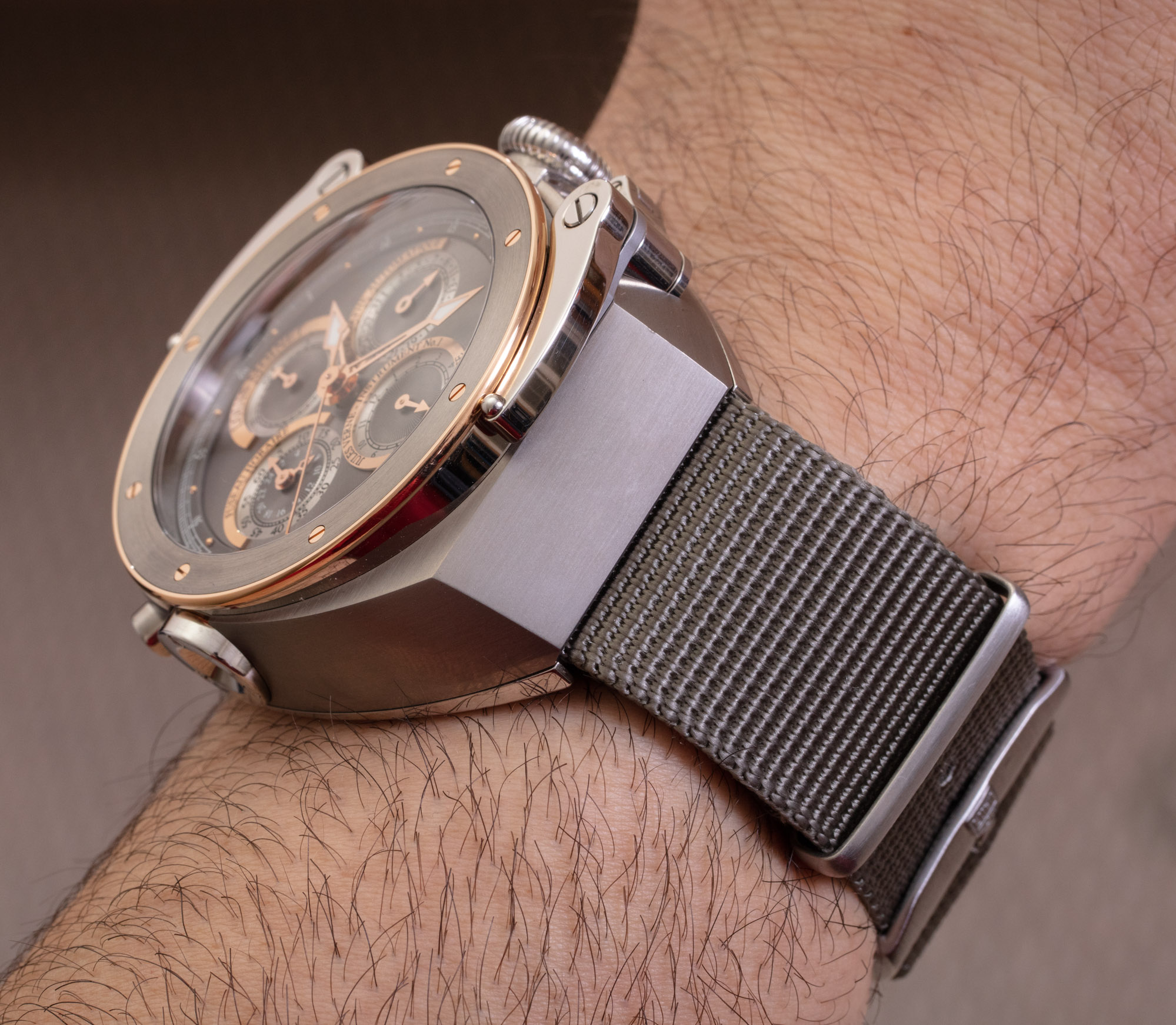 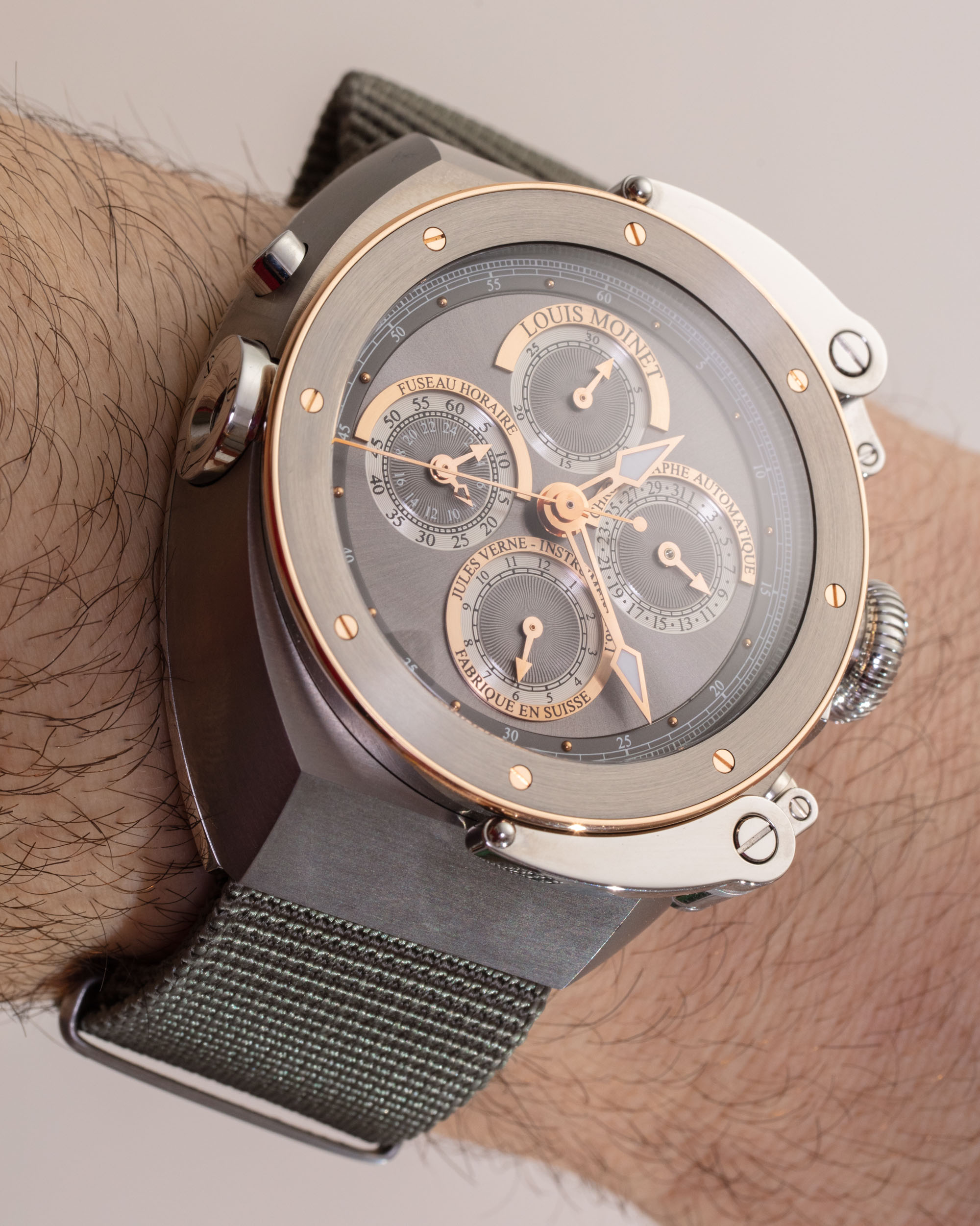 You might notice that I shot the Jules Verne Instrument 1 watches on a strap different from the stock, thick-padded black alligator strap originally supplied by Louis Moinet. I actually ended up putting the watch in a 24mm wide gray-colored NATO-style strap from Luminox. I decided that the particular tonneau-style case design would be very comfortable on a strap of that type (I was right), and also that the gray color would meld well with the titanium of the case and the gray and gold tones of the dial. No doubt a case like this could look interesting on a number of strap options for those willing to experiment.

One of the weaknesses of the Louis Moinet Jules Verne Instrument watches was that some of them had difficult legibility. The “Cotes de Jura” engraved while-dial models with the blued hands are probably among the most legible. The original black-dialed model has really thin hands and was simply not very legible. This particular pictured option (that was a limited edition of just 12 pieces) had some changes over the original models. First, you can see that the hour and minute hands are large, with luminant on them, and also easier to read. The dial is also done without an engraved finish but does maintain a healthy sense of depth due to the various layers. The first versions of the Jules Verne Instrument watches had automatic rotors with a surface texture meant to look like the surface of the moon, and then later with matching “Cotes de Jura” wavy engraved lines. These later pieces as seen in this article use a more traditional automatic rotor design as opposed to the more artistic (but probably more complex to produce) ones from the first few Louis Moinet Jules Verne Instrument watch series. 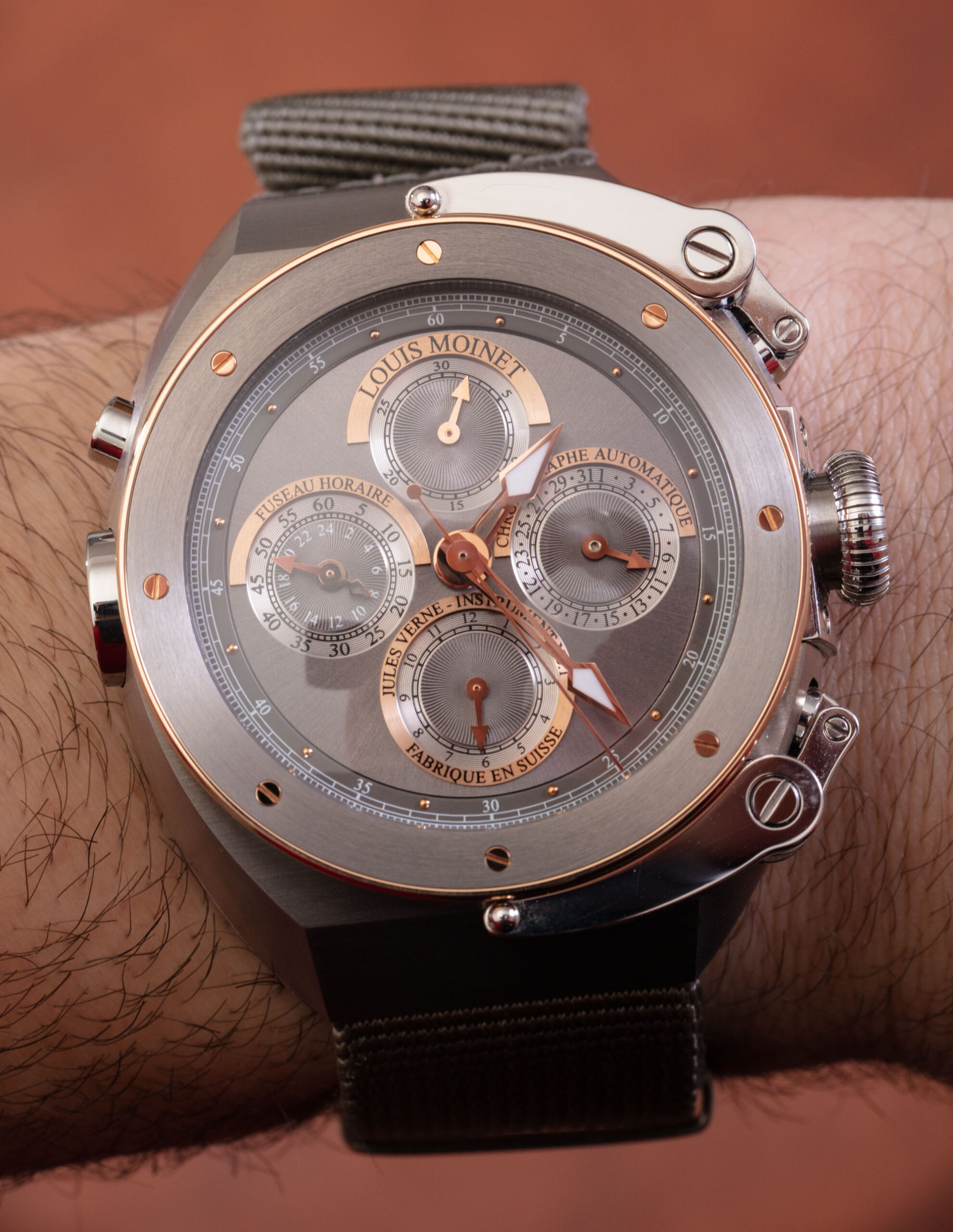 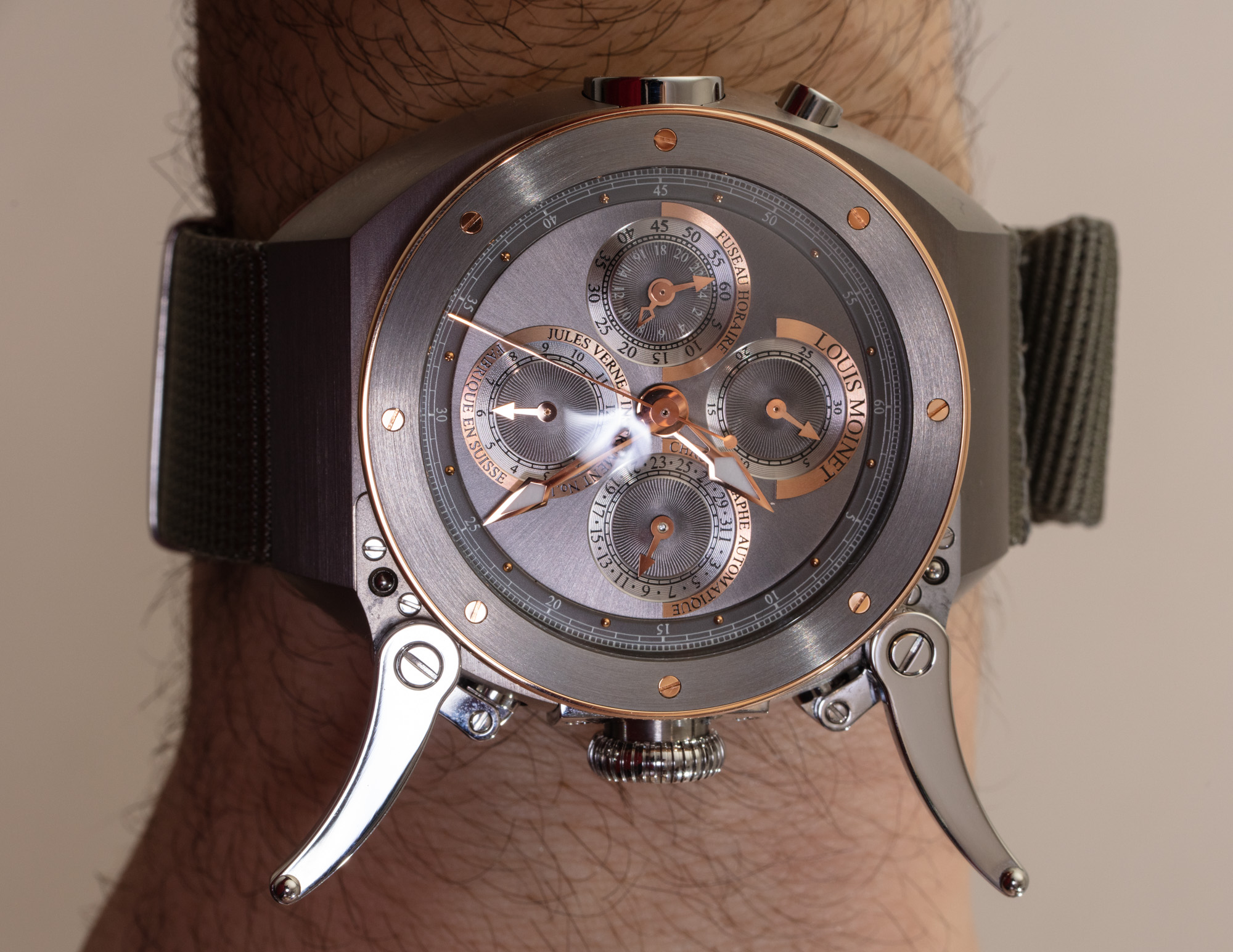 While it is covered with a piece of the strap in my instance, you can view the movement through the rear of the watch and it is a nicely decorated version of the 7750, which operates at 4Hz with a power reserve of 44 hours. At the time, it was much more common for high-end watches to be equipped with Valjoux 7750 movements. These days the movements are much more difficult to get and watches at these price points tend to opt for more expensive and distinctive movements, but that doesn’t actually always make them better. That said, I do understand how, after the big push for in-house movements, brands today are less likely to rely on such “democratic” mechanisms for their luxury wearables.