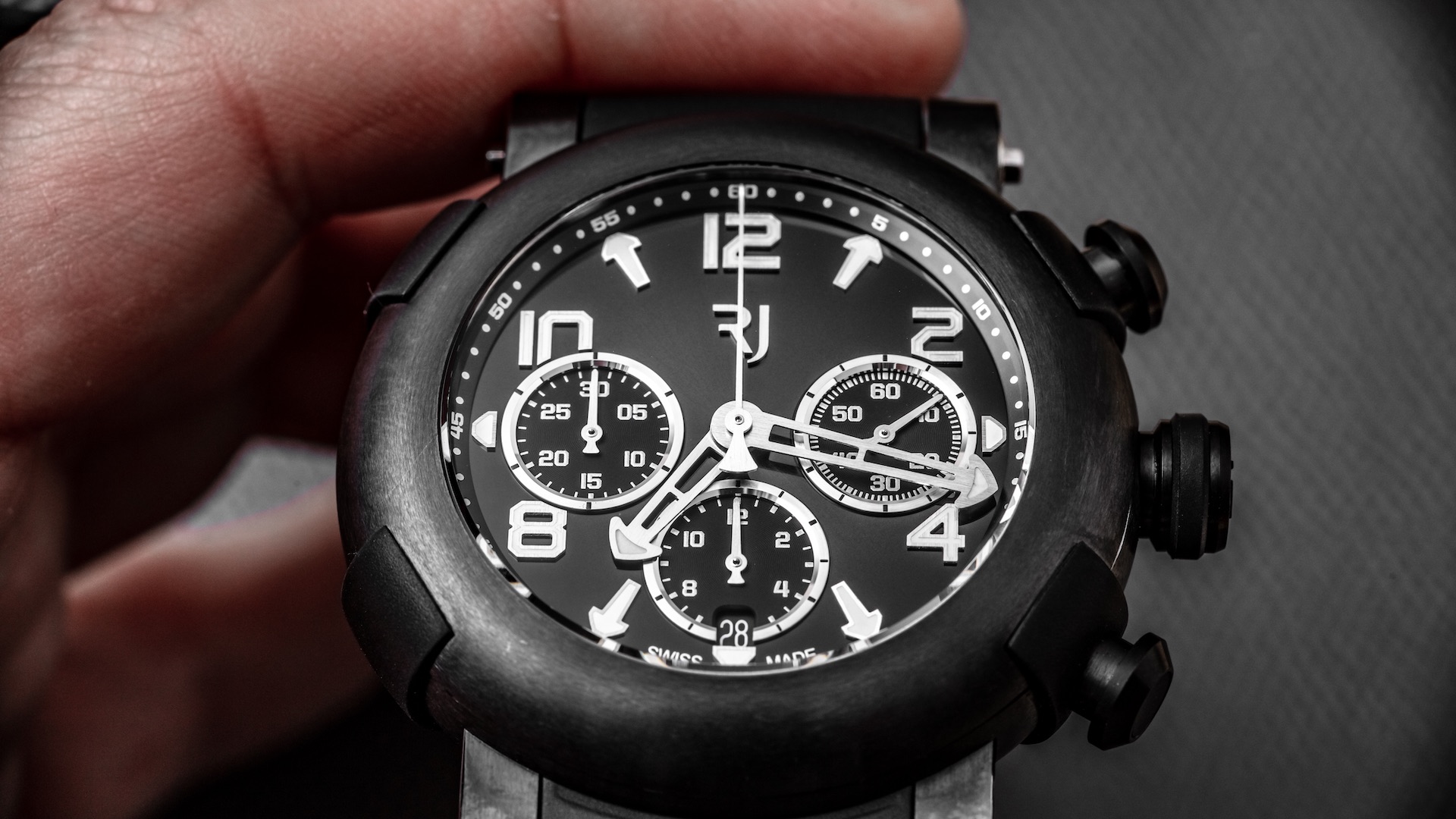 Prior to publishing this watch review but after it was written, RJ watches ceased operation due to its primary funder choosing for the Swiss watchmaker to become insolvent and declare bankruptcy. That is a shame and, over the course of 2020, there may sadly be more collector watch brands that end operations, temporarily or permanently. That said, this RJ Arraw Marine Ceramic review is still something aBlogtoWatch wanted to publish — albeit now as a “No Longer Made” article, as opposed to a traditional watch review of a product that will be widely available for the time to come. With that in mind, please enjoy the following review of the RJ Arraw Marine Ceramic watch. 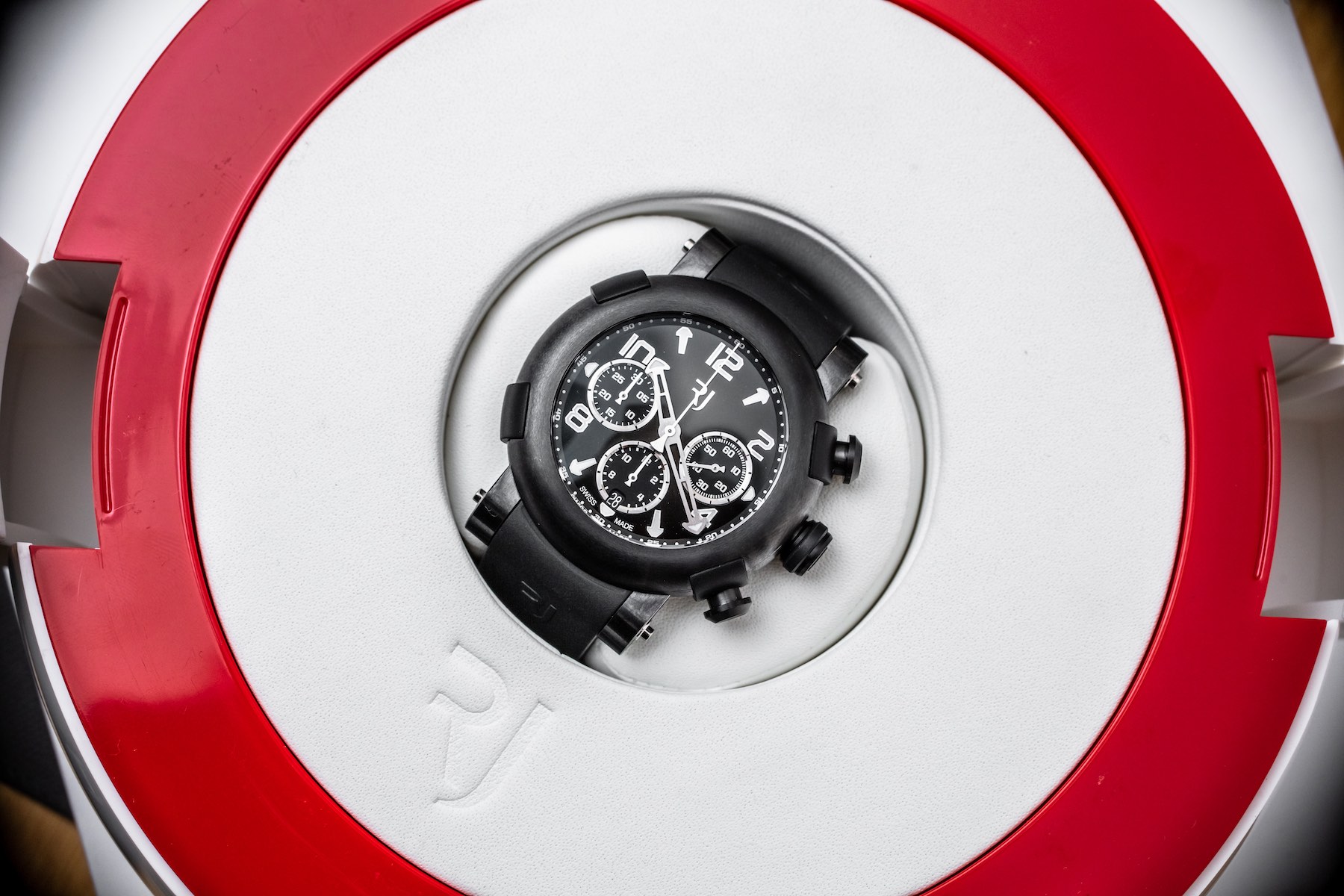 It wouldn’t be RJ if the collection didn’t include some absolutely wild stuff… but sort through the 34 (at present on the RJ website) Arraw model watches, and you’ll see this one piece in black ceramic that is particularly interesting. This is the RJ Arraw Marine Ceramic watch (reference 1M45C.CCCR.1517.RB) and, in my opinion, it is probably the best thing produced by the brand today. I’ve been following this quirky brand for a while now (over a decade) and through several CEOs. Perhaps the biggest change at the brand recently was the transition from being called “Romain Jerome” to just “RJ.” Also new is the CEO, Mr. Marco Tedeschi, who I spoke with over a year ago when he first joined the RJ brand. Today, I review the RJ Arraw Marine, which is probably most attributable to the efforts of the brand’s current leader. 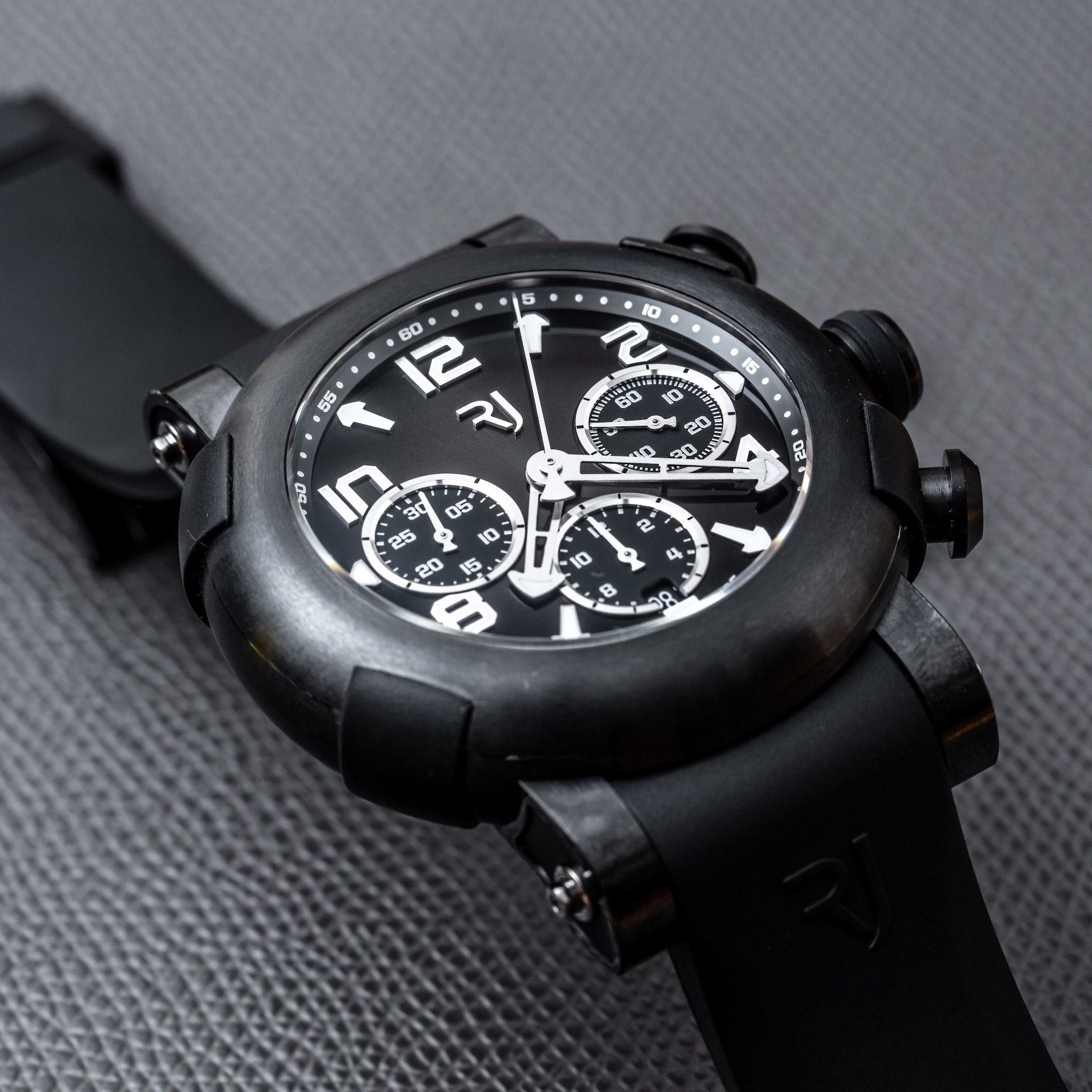 Former RJ CEO Manuel Emch positioned the brand as a maker of entirely limited-edition watches with small productions, quirky designs, and prices that most traditional timepiece collectors might scoff at. Romain Jerome was determined to sell its toy and art-style watches for big kids with lots of disposable income. Apparently, for a while, this was an entirely sound business model. Unfortunately, not so any longer. The problem with the former business model, in my opinion, was the tug-of-war before product novelty and price. Romain Jerome could certainly make a very original set of 50 watches but not without pricing each of them very high because there are so many new parts and development needed for a relatively small number of watches. 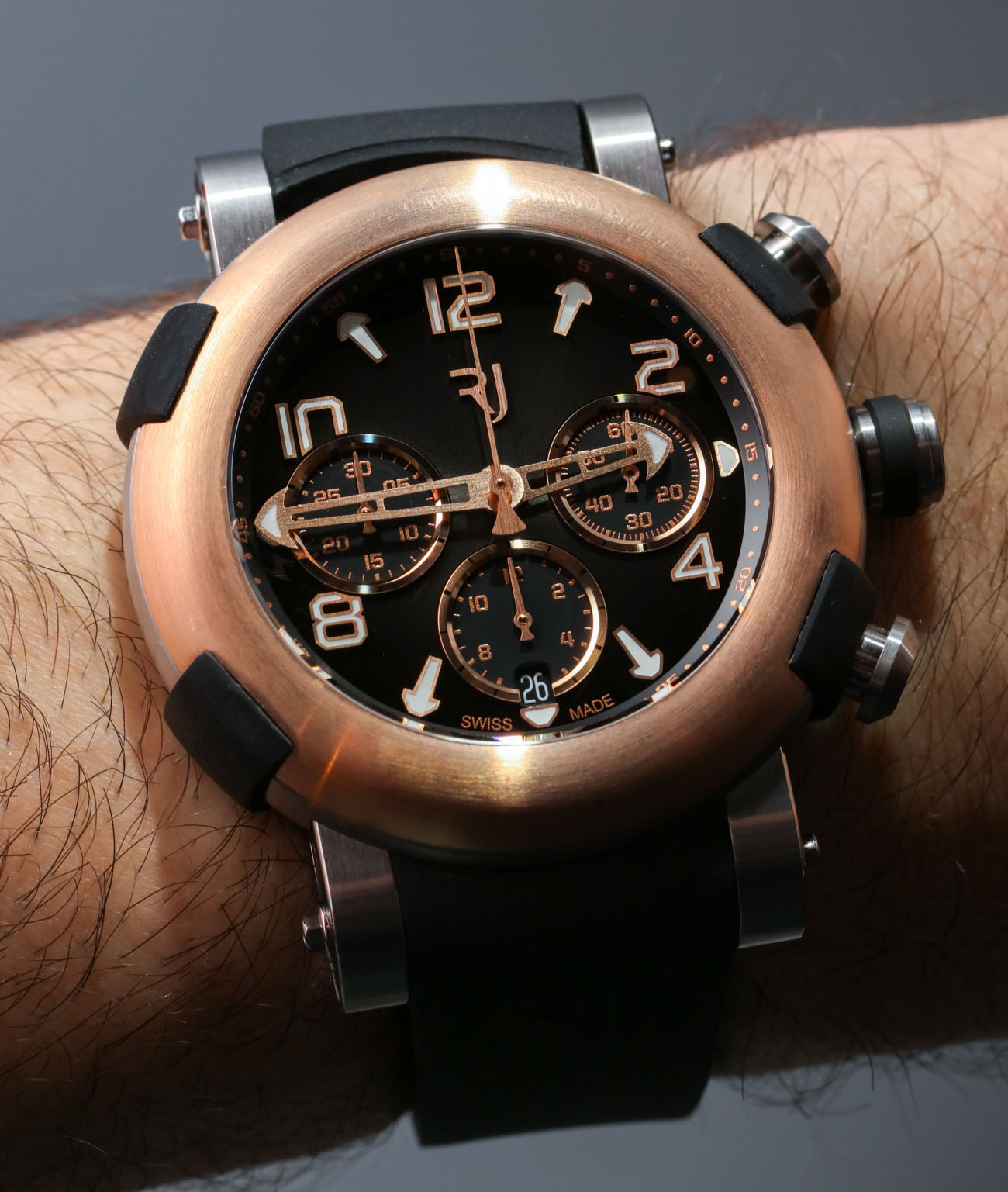 While exotic limited-edition timepieces will still probably be a big part of the RJ brand, exclusively limited-edition watches will not — and I think that is a good thing. The Arraw might come in many forms, but the core collection is meant to be a permanent member of the RJ product family. Look at the design of the case and people who know the brand will be familiar with the look, but not the name. More than eight years ago I reviewed the Romain Jerome Titanic DNA watch that originated this case design under the leadership of then-CEO Yvan Arpa. The Arraw case isn’t the Titanic DNA but it is inspired by it. 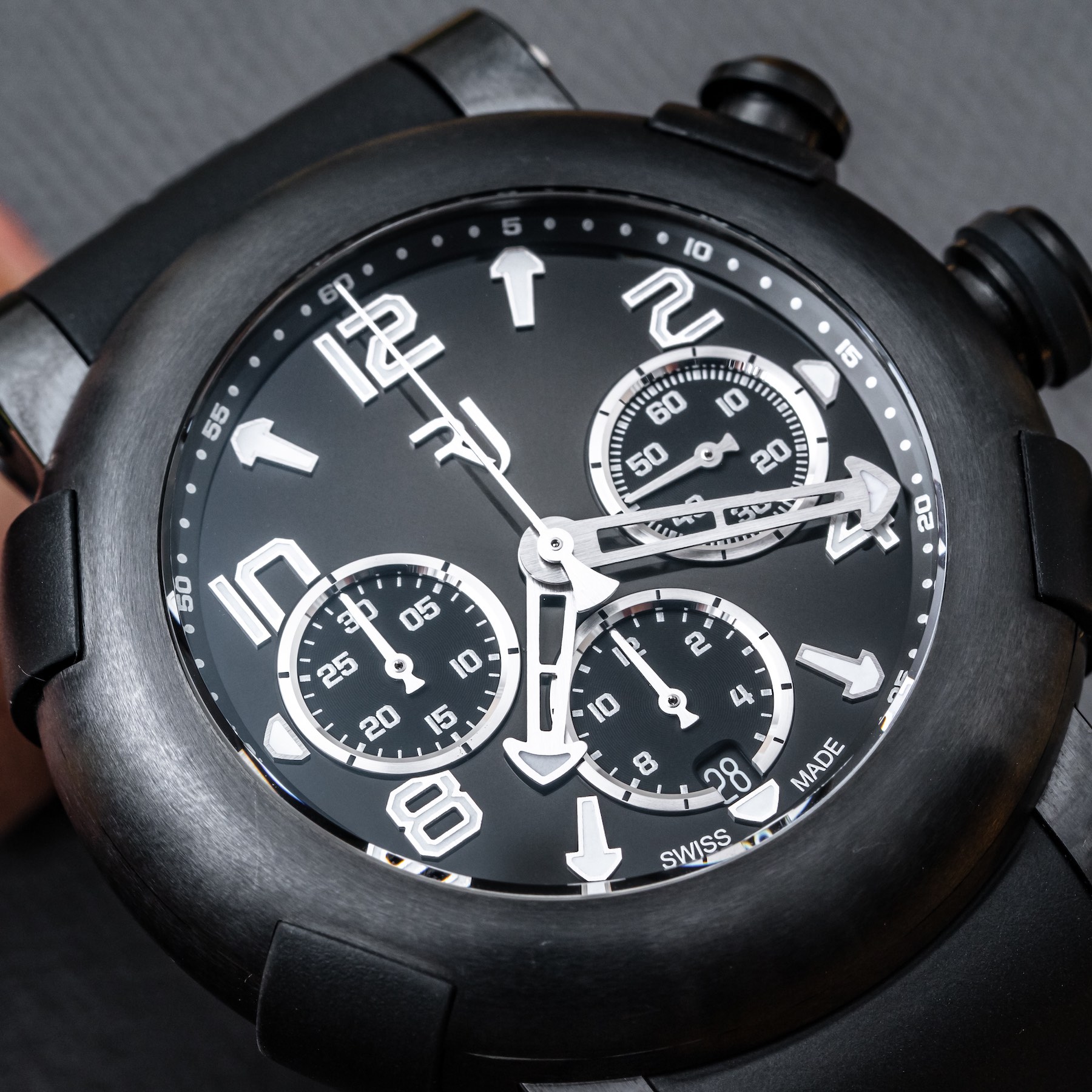 What is probably most noteworthy about the Arraw is that RJ took what it felt was a good core Romain Jerome design and sought to thoroughly update it as a new and modern timepiece. The Arraw has all new parts and features but is designed to look like it exists in the DNA, which RJ has made for itself. This is probably the finest Romain Jerome / RJ timepiece I’ve ever worn from the perspective of being suitable for daily wear. This isn’t just a compliment to RJ’s current team, but it’s also a message to timepiece lovers who may have experienced a cool, albeit uncomfortable, Romain Jerome watch in the past that they may want to try again.

The Arraw was RJ’s first “core collection model,” intended to receive attention and model variation with models. I don’t really understand the name,  since “Marine” is used by other brands like Ulysse Nardin and the Arraw isn’t a diver’s watch, nor is it nautical-themed. In fact, the only “Marine” part of the watch I can think of is the core design’s relationship with the Titanic DNA collection, which is perhaps not the marine-theme most consumers want to think about. Then again, I say that as someone who probably knows way more than most about RJ. 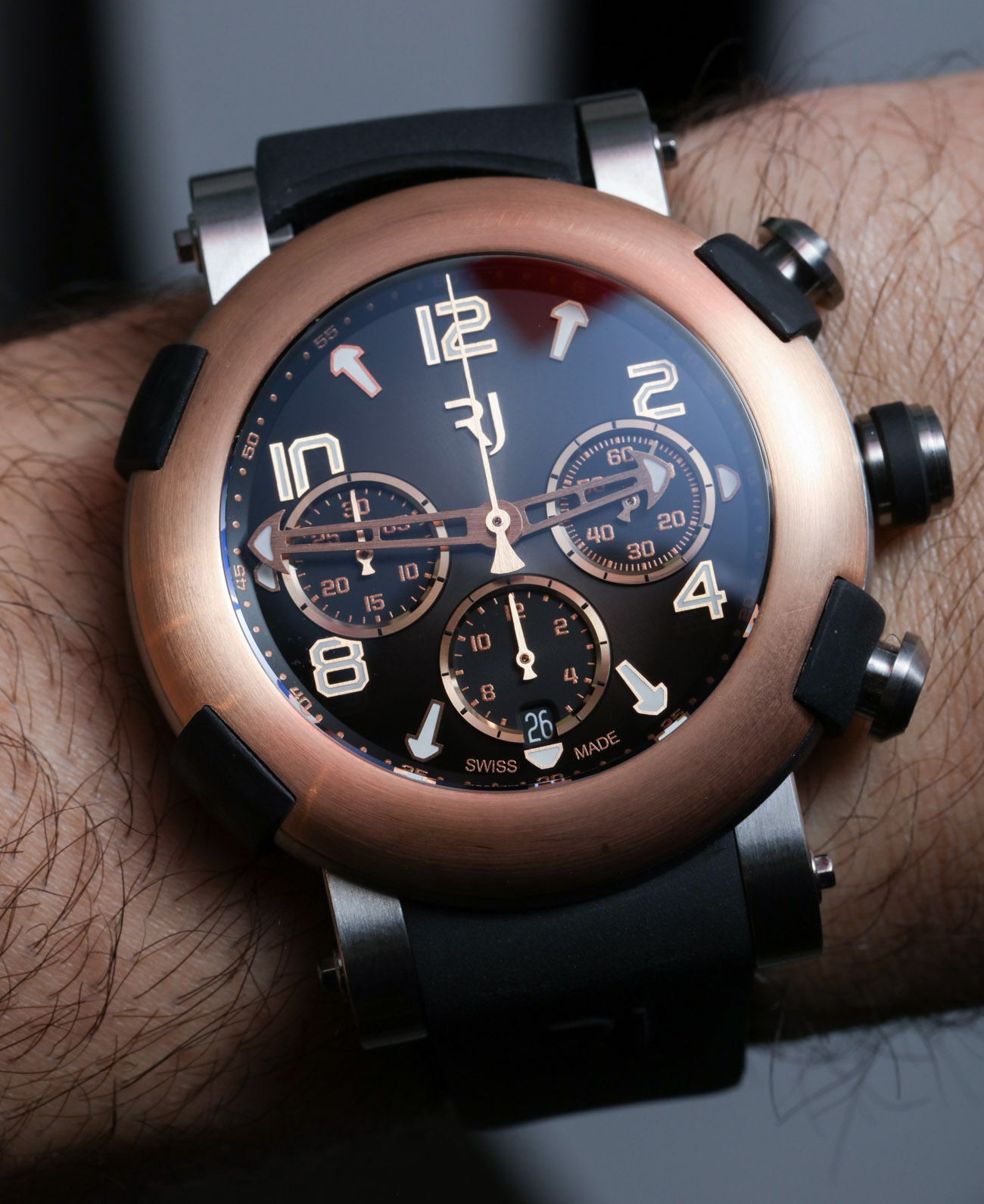 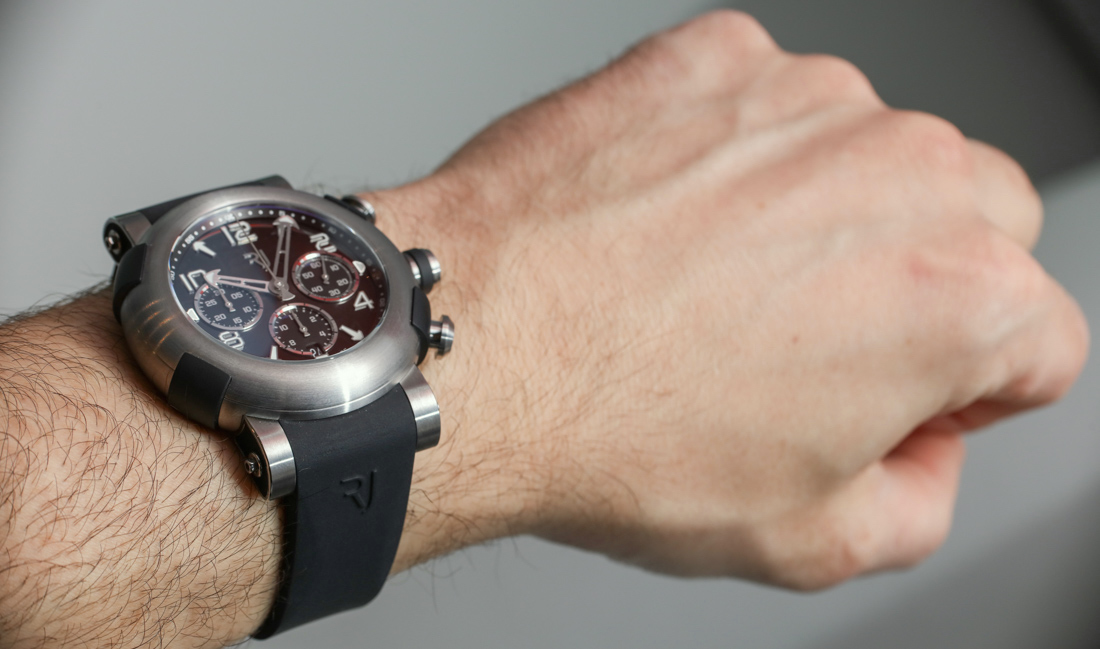 The first thing people with Romain Jerome experience might find when putting the Arraw on their wrist is that the case shape is very similar to the older models but thinner and more comfortable on the wrist. The case is an ample 45mm-wide and about 15mm-thick with a roughly 55mm lug-to-lug distance (case is water resistant to 100 meters). These are not the dimensions of a small watch, but mind you this is smaller and more wearable than before. The only issue for me is that the lug design, by nature, means that smaller wrists will have the longer lugs jut out past their wrists a bit. 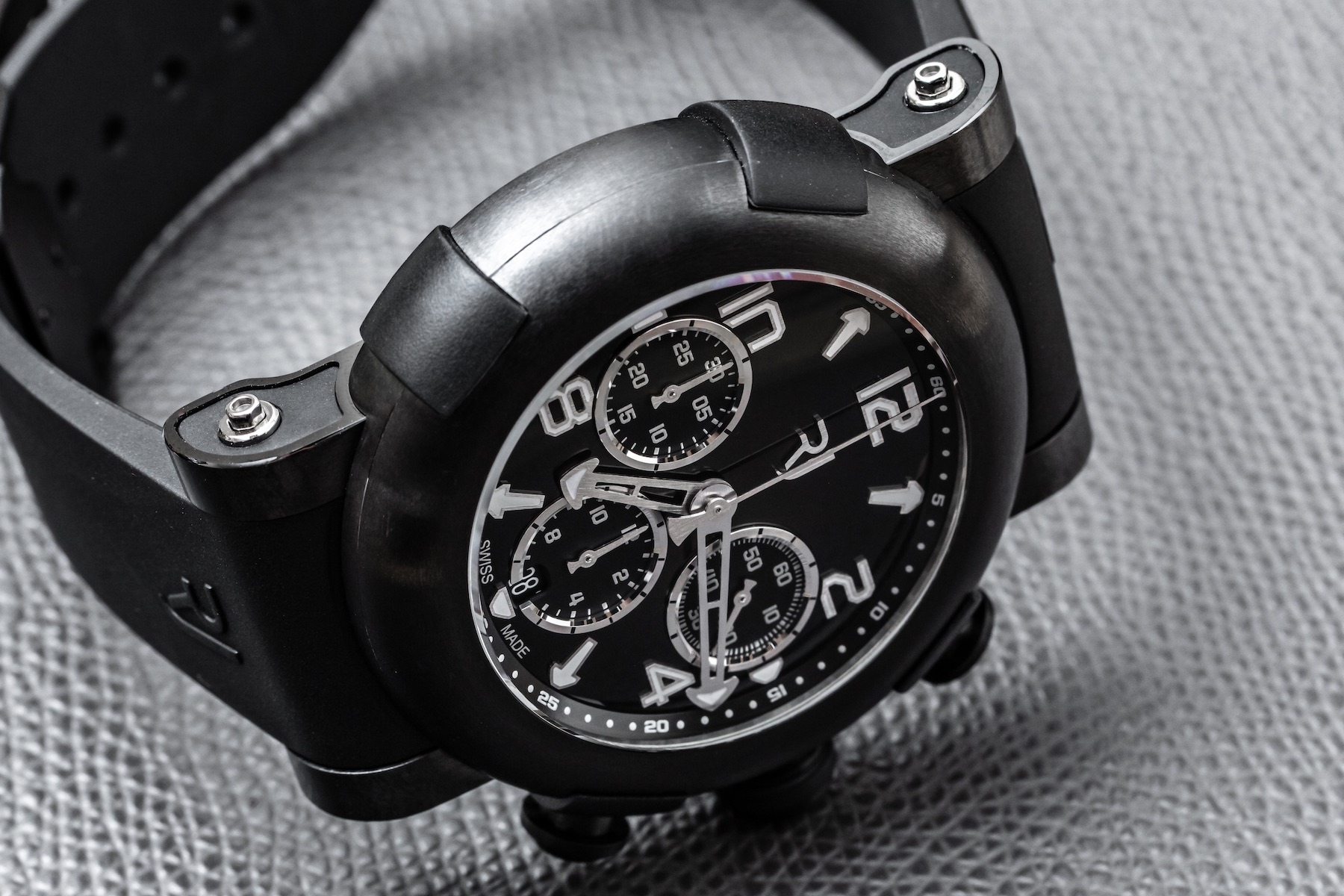 The Arraw Marine Ceramic — as the name implies — features black-colored ceramic as a primary case material. RJ did a beautiful job giving the ceramic a horizontal brushed finish, which actually makes it look like metal. If you told someone this was a black-coated metal watch they would believe you. This means you get the finishing of a metal watch with the scratch-resistance of ceramic. Other case materials include some metal as well as the “RJ bumpers” in rubber which come from the “X” shapes which went through the dials of some former Romain Jerome watches.

One of the new tricks the Arraw case has is the ability to easily remove the straps by pushing the two metal pushers on each side of the lugs. These used to be screws on former design, and now they are pushers to release the straps if you push them down both firmly enough. It isn’t the world’s most sophisticated strap-removal system, but it works well and the straps are pretty sure when in place. The downside is that you seem to only have the option of getting other RJ straps that have the proprietary connection system. 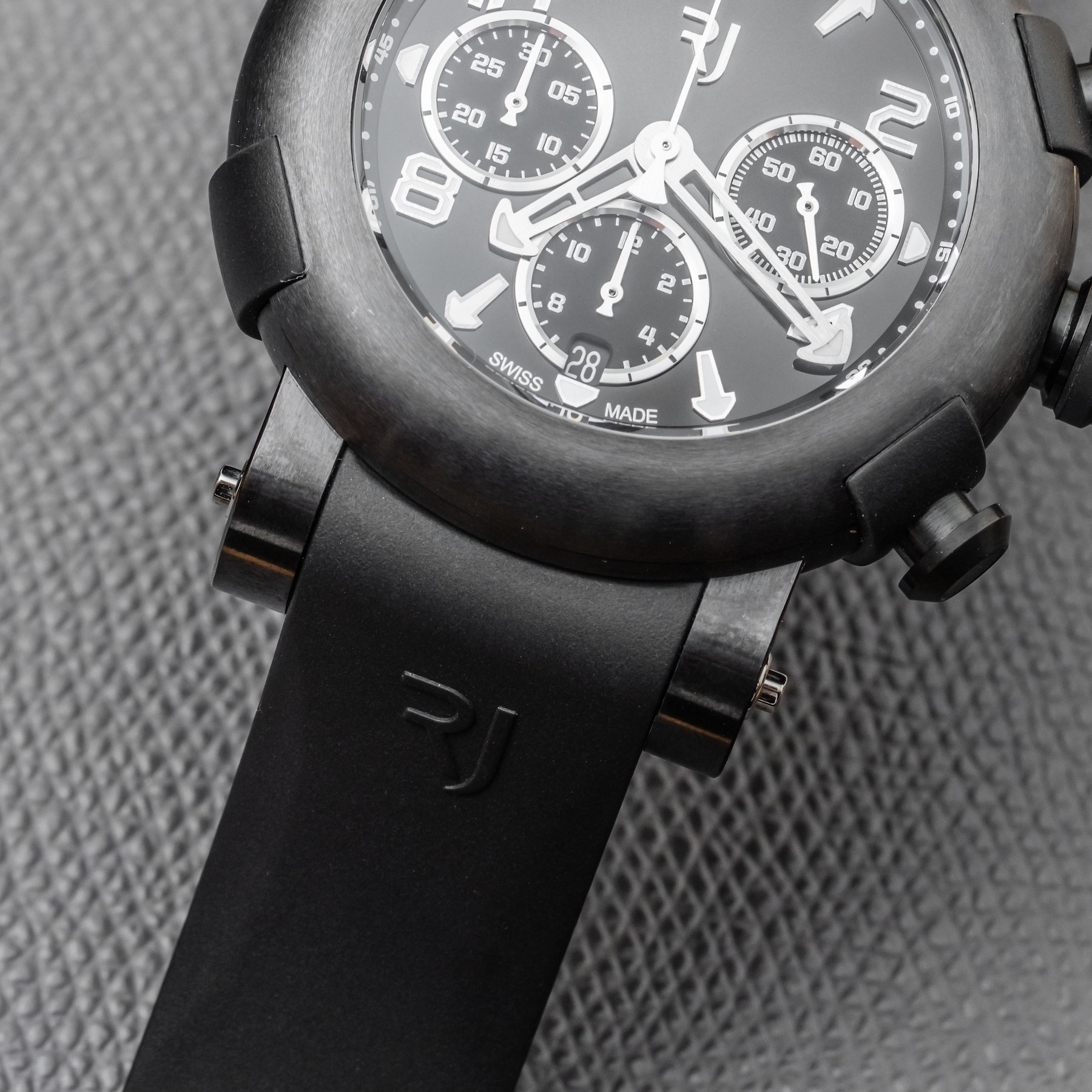 The strap itself is in black rubber and features a much improved fold-over deployant clasp. A lot of former RJ watches have overly thick straps with bulky deployants that earned them few fans. This thinner rubber strap style and more compact titanium deployant was the right way to go. This is also where you see some of the Hublot influence, as Mr. Tedeschi was formerly at Hublot for a number of years.

Ironically, both Marco Tedeschi and Yvan Arpa (former Romain Jerome CEO) worked under Jean Claude Biver at Hublot. Yvan Arpa was part of the team who designed the original Hublot Big Bang, and after that, we went to RJ to design the Titanic DNA. Now Marco comes in and updates the core RJ look, bringing with him a lot of lessons he learned at Hublot — such is the wisdom of producing modular case designs so that aesthetic elements and materials can be so easily adjusted. This is why the Arraw Marine is still a new piece but has nearly three dozen models so far. 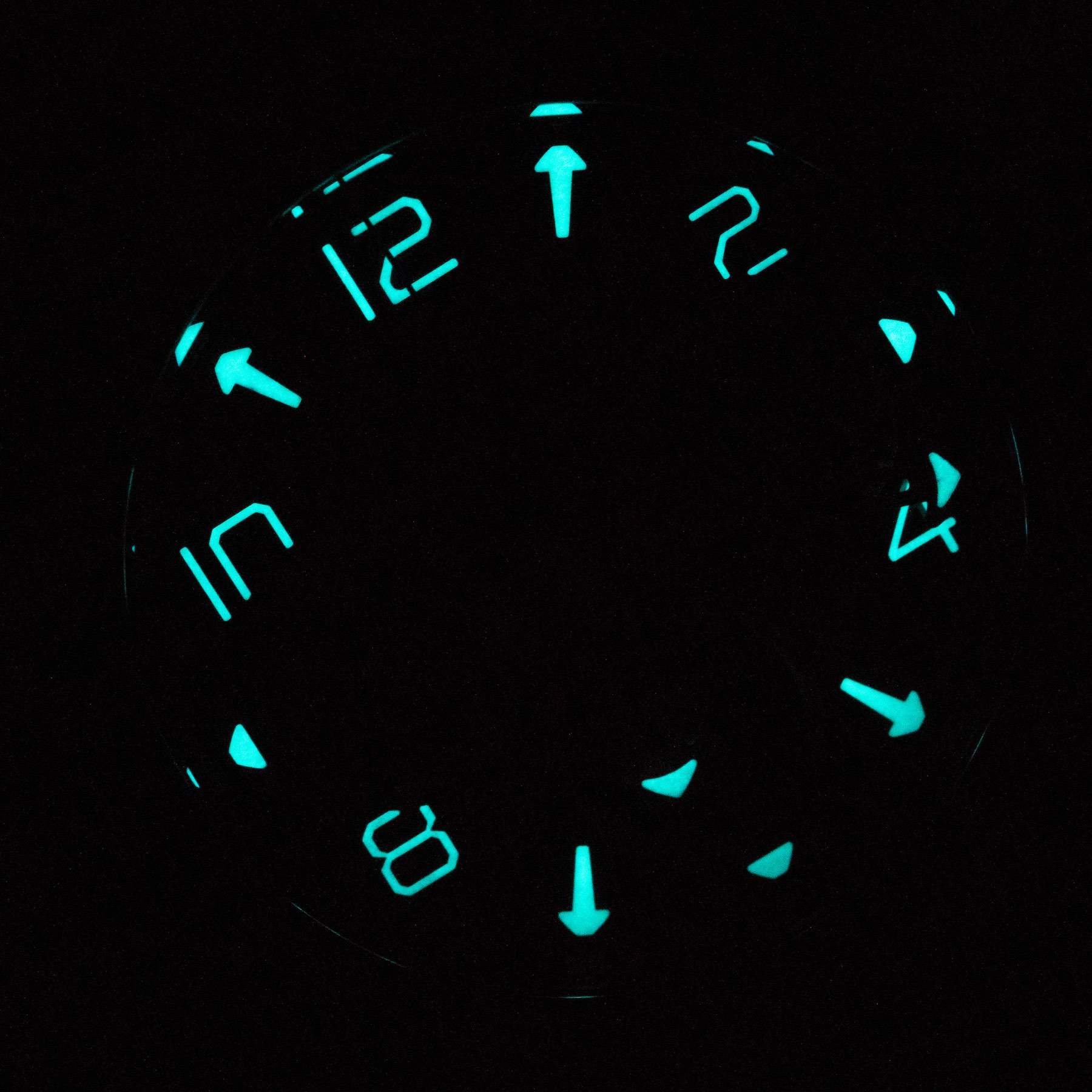 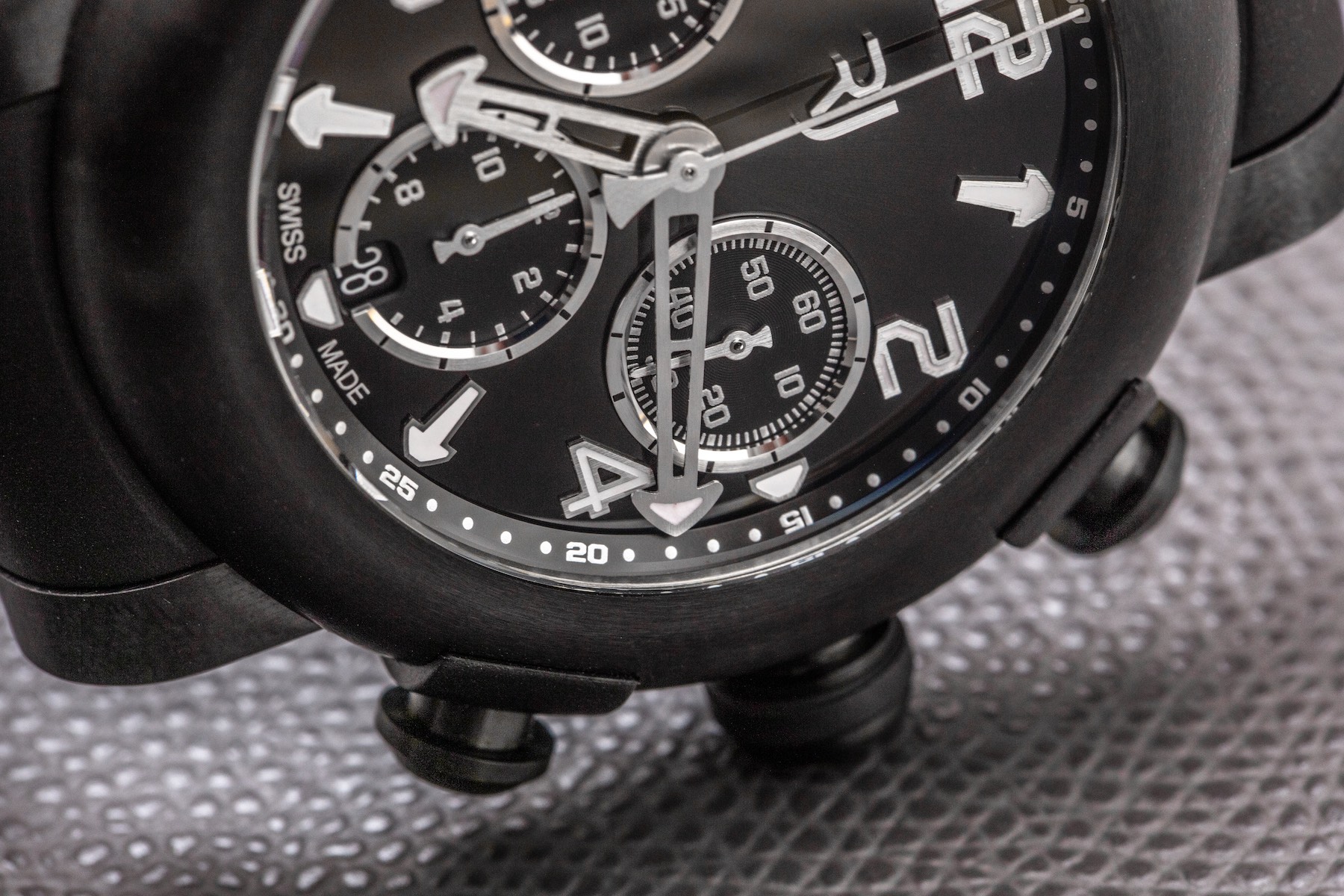 Look closely at the Arraw dial, and you’ll see its high-quality materials and attractive design. The look is very Romain Jerome, but also has elements of older Porsche Design (which RJ sort of mimicked a few years ago). The style is pleasant but not as original as I might like. It also suffers from legibility issues since the skeletonized brushed hands hover over a lot of parts that are finished the same way. Designers seem utterly obsessed with skeletonized hands these days, and their arguments for them are two-fold. First they say that skeletonized hands helps with reading chronograph subdials more easily. OK, I agree with that but I remind them than most people rely on the watch dial for reading the time probably 99 times out of 100. So, given that type of usage, emphasis should be on legibility for reading the time. Second, designers simply argue that skeletonized hands are more “modern.” Again, that might true but I don’t give people points for simply being trendy.

While RJ can certainly tweak the Arraw dial design in the future, it is rendered very well with an attractive dark-gray gradient dial and the applied brushed metal dial elements. I’d say that if it were up to me, for the next round of Arraw Marine dials I would focus on having RJ keep playing with the hands and hour markers. Over the dial is a very well AR-coated and slightly domed sapphire crystal. 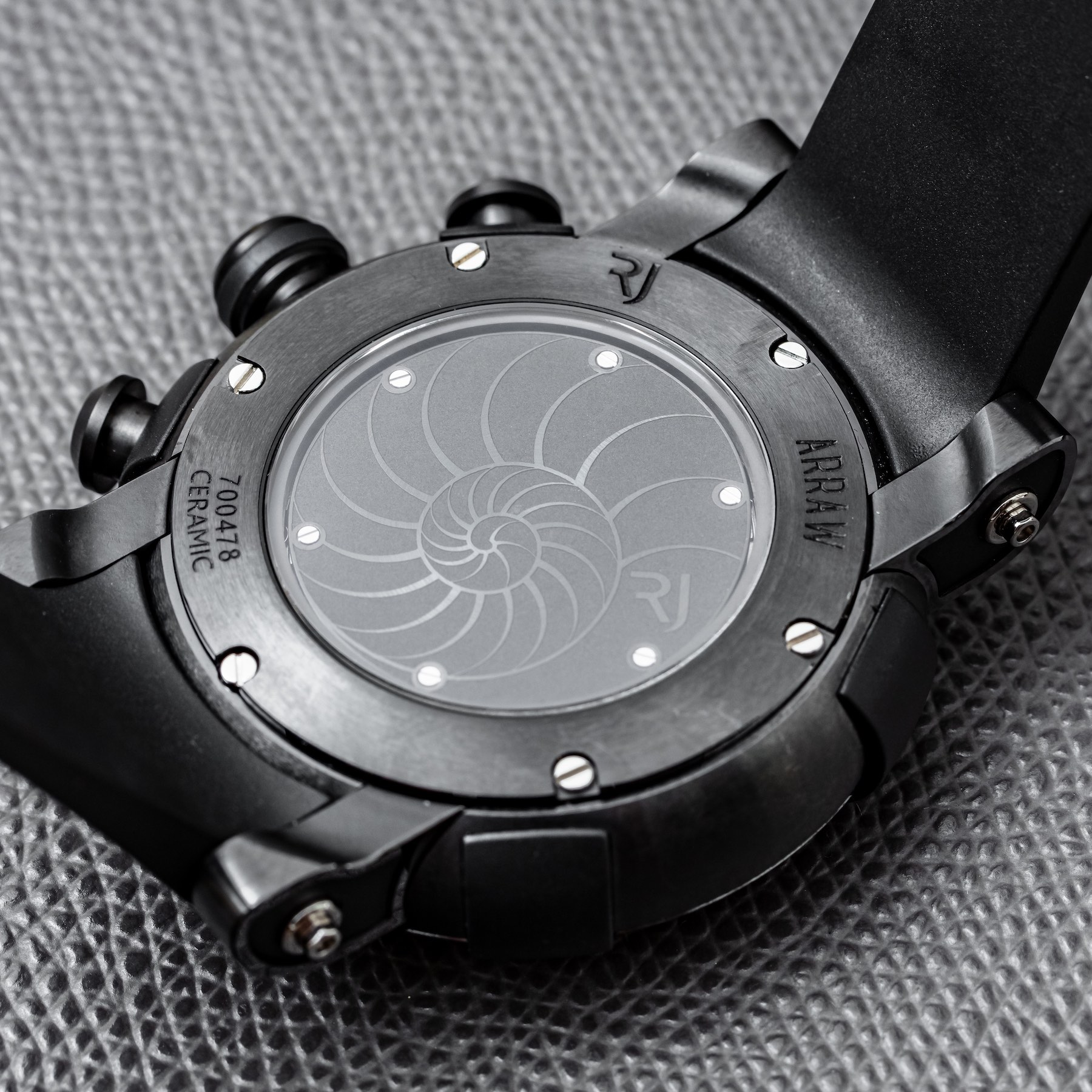 Look on the back of the watch, and you’ll see a “mystery” automatic rotor which is meant to look like a spinning nautilus shell. Is this why the Arraw has a “Marine” modifier to the name? This is a fun design element but not original as we’ve seen on Blancpain watches and, of course, the Nautilus name is most closely associated with Patek Philippe. I don’t really know why RJ was going for this theme outside of wanting watch lovers to think of other models. This isn’t an issue per se, but it is a sign that RJ has yet to find its groove in terms of design originality in a few key areas (such as the rotor design).

Under the automatic rotor (not visible to the eyes) is the RJ caliber RJ2040 automatic chronograph movement. Produced for RJ by Concepto, I believe, this movement operates at 4Hz (28,800 bph) with 42 hours of power reserve. The automatic movement includes the time, 12-hour chronograph, and date window placed at 6 o’clock on the dial. For the price of this watch, RJ might want to show the movement off a bit more or at least prominently include images to it on the website. Not that anything is wrong with the movement, but for a timepiece like this from a smaller independent brand at over $10,000 in price, I believe consumers want to know a bit more about the aesthetics of the movement inside it. 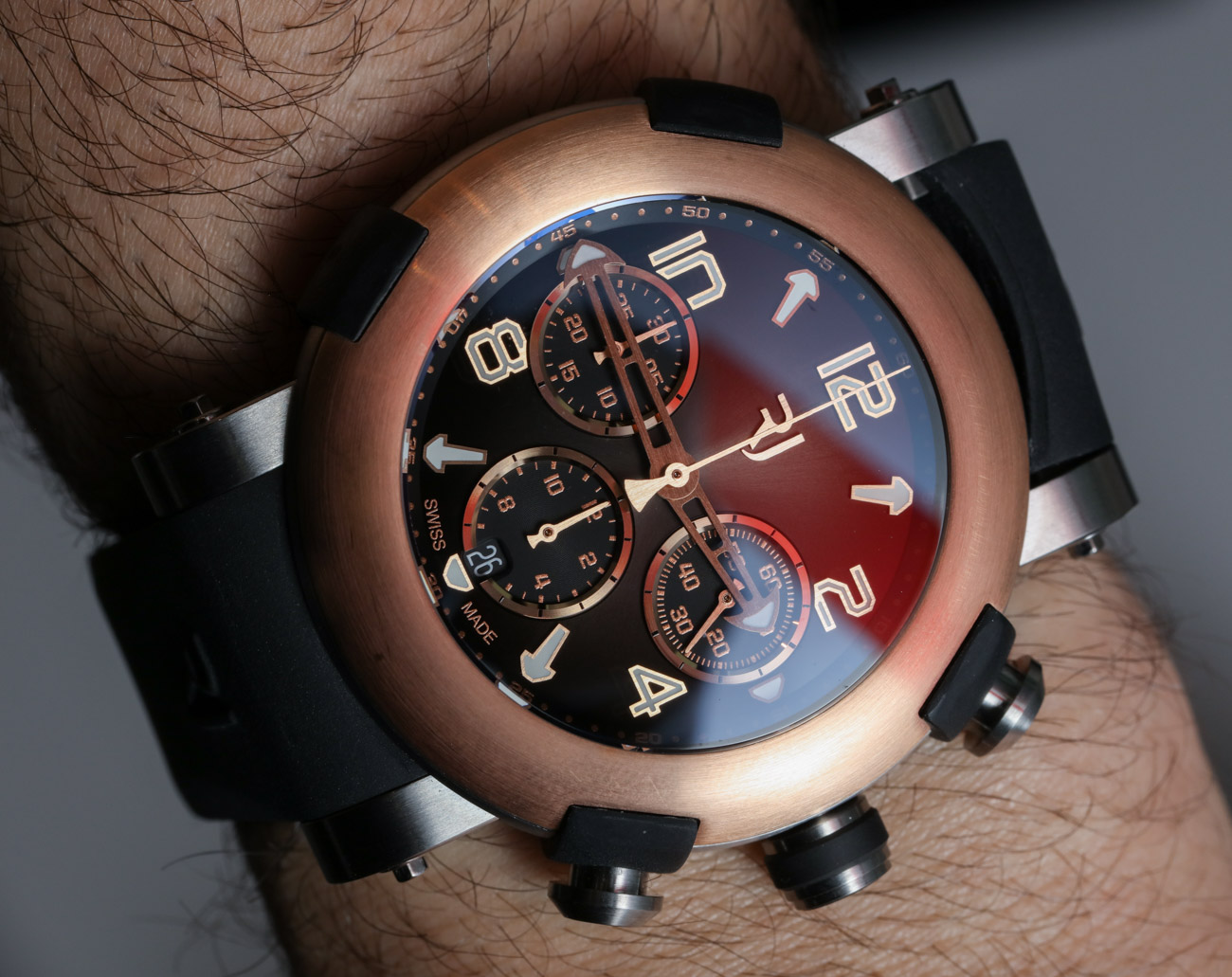 The Arraw Marine box itself is a work of art and the brand even has its own Bearbrick figuring that is wearing a printed RJ watch. For people who have the disposable income to purchase a timepiece such as this, which is more about visual distinction than simple brand awareness, I think RJ is a more attractive option than ever before. Price for the RJ Arraw Marine Ceramic is/was 11,900 Swiss Francs. While there aren’t any of these watches specifically available as of tnow, there are some interesting RJ/Romain Jerome pieces on eBay currently that are worth browsing. See more at the RJ Watches website here.

Necessary Data
>Brand: RJ
>Model: Arraw Marine Ceramic reference 1M45C.CCCR.1517.RB
>Price: 11,900 Swiss Francs
>Size: 45mm-wide, ~ 15mm-thick, and ~ 55mm lug-to-lug distance
>When reviewer would personally wear it: As a relatively comfortable daily wear when I want an uncommon black ceramic sports watch.
>Friend we’d recommend it to first: Anyone who has been interested in the Romain Jerome (RJ) brand for a while but who hasn’t felt that any of the previous models felt good on their wrist.
>Best characteristic of watch: An excellent job of reinventing a watch meant to look like a brand classic but modern and well-suited for today’s consumer tastes and expectations. Great build quality overall.
>Worst characteristic of watch: Some design elements are still not as cohesive as they could be. Case is long for smaller to medium wrists.